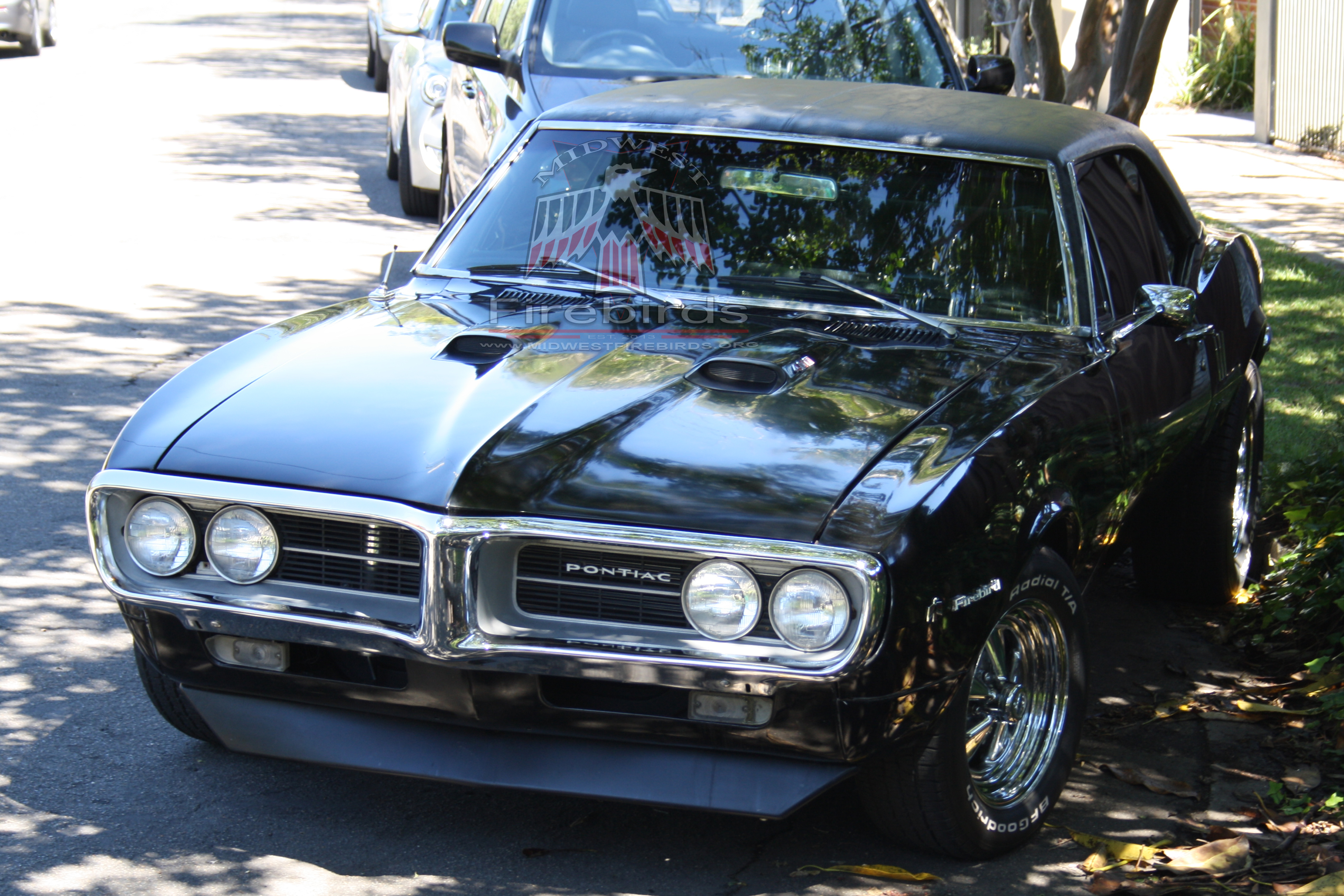 AUSTRALIA: It wasn’t long after the MWF club was formed in 2013 that we started locating first-gen. owners in other parts of the world. We’ve already networked with owners across the Atlantic and today we’re excited to turn our view west and bring you a look at a car from across the Pacific. This black 1967 coupe belongs to Paul C., who lives in Sydney, Australia. He purchased it in March 2013 from a buyer in Connecticut. He tells us the car was originally sold new there and remained on the US east coast. “The car was advertised as a 400 Pontiac, TH350 with a shift kit, mild cam and carb,’ said Paul. 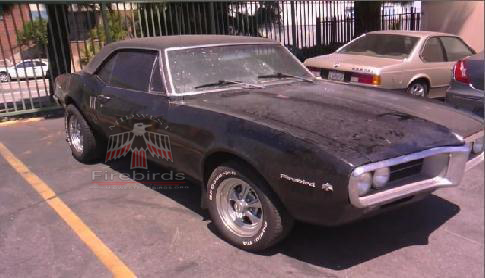 The dusty Firebird as it looked when it was dropped off at Paul’s house for the 1st time.

The car arrived with racing bucket seats, plus the originals, along with a lot of other spare parts thrown in. “When I picked the car up from the shipping dock it was the first time I saw it,’ said Paul. I was surprised at the size (it seemed a little smaller than I was expecting), however I still think it was possibly the most beautiful vehicle I laid eyes on. I still remember that moment. It turned heads all the way home as I towed it back to my house on the back of a trailer.” After the vehicle was in his garage, Paul pulled the engine and cleaned it up. He also repainted it the Pontiac blue. “It seemed to be running well so a rebuild wasn’t necessary,’ said Paul. He replaced the water pump and fitted an alloy radiator with an overflow tank on it. 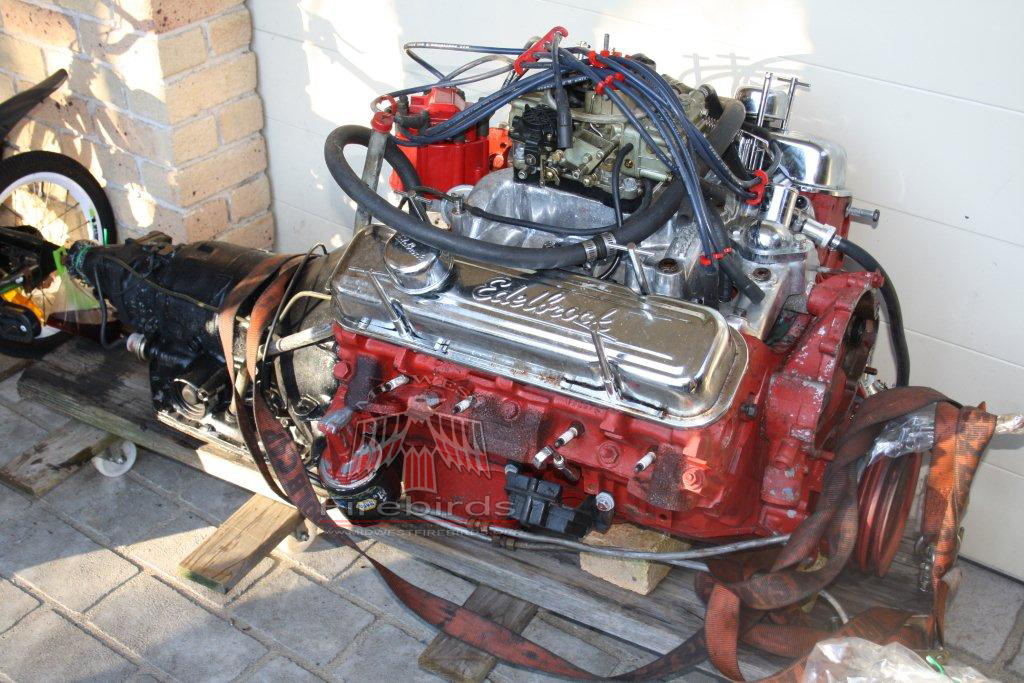 The difference between the engine when Mark pulled it out (above) versus after he was done (below) is quite striking. When the ‘bird came over from the US, the motor was dirty and looked worn out. Once Paul was through giving it an overhaul, it looked showroom fresh. 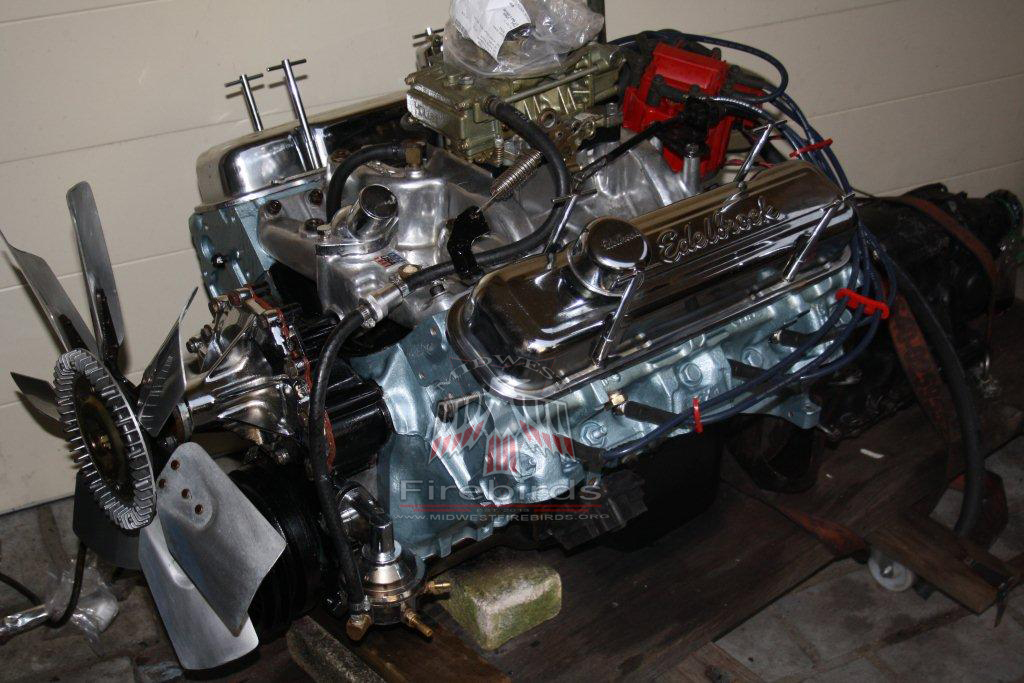 The ‘bird’s body had suffered some damage that needed attention. “There was body damage on the rear quarter that I was able to repair. I also replaced the front left fender due to some irreparable damage.” 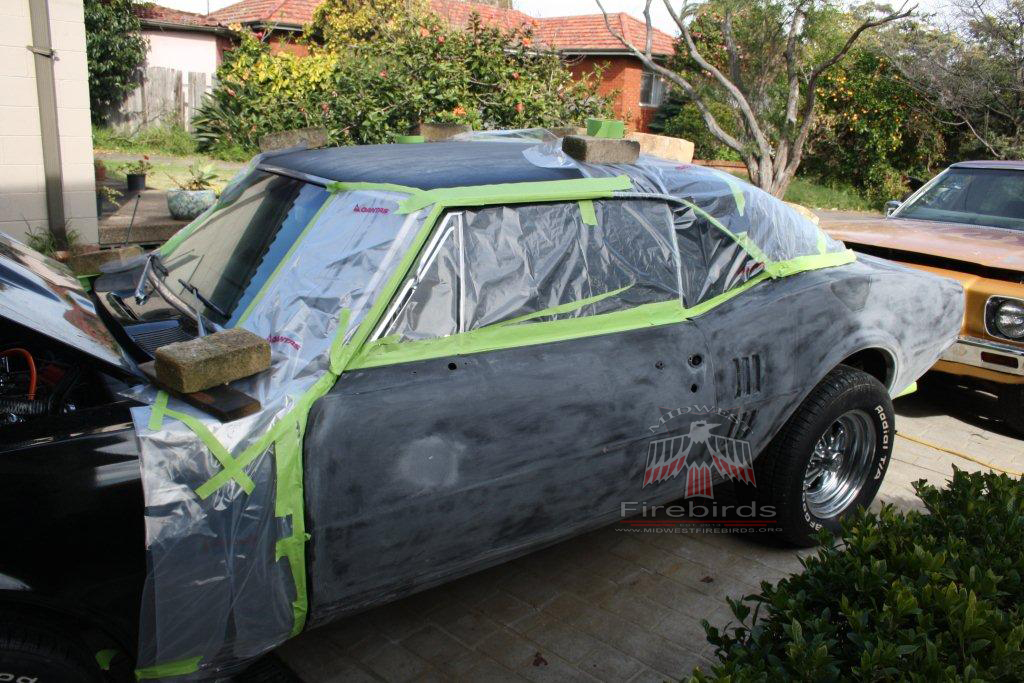 Even more work was needed to get the Pontiac roadworthy: “Almost nothing worked on it electrically and there was no wiper/washer system fitted.” Paul installed a ‘Newport Engineering’ wiper motor and system. The neutral safety switch was also bypassed for some reason and it had no heater, indicators, hazards or headlights.” A new power steering box was installed, due to a leaking original unit, along with new body seals, radiator support bushings, control arm bushings, upper ball joints, passenger floor pans and a few spots of rust were cut out near the lower firewalls. 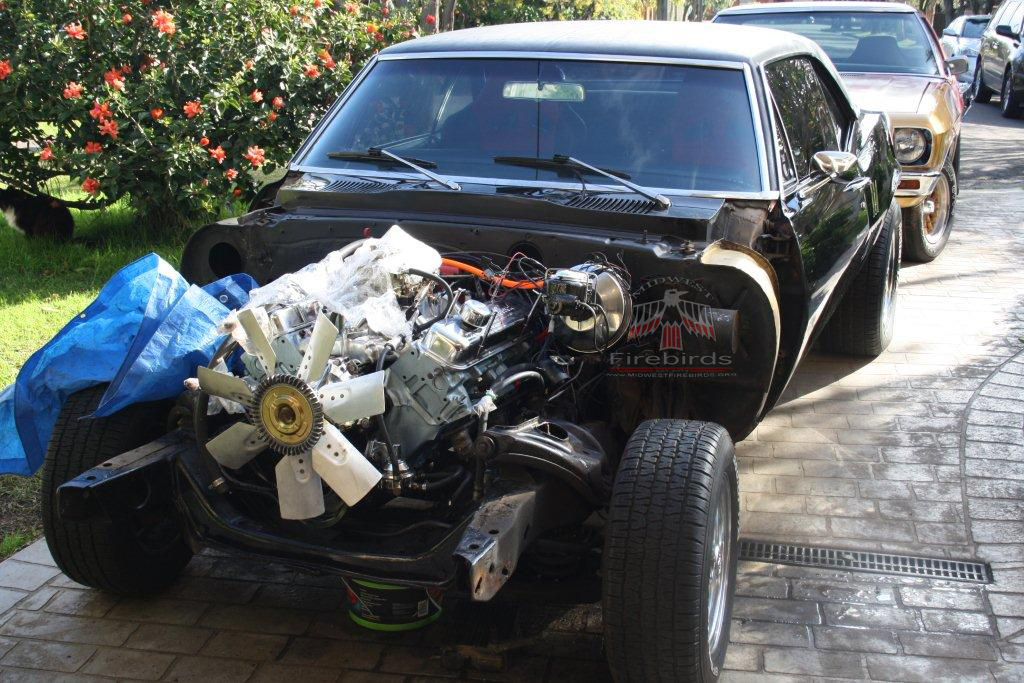 While upgrades were being made, Paul opted to install a 400-style hood to make his ‘bird appear even more aggressive. 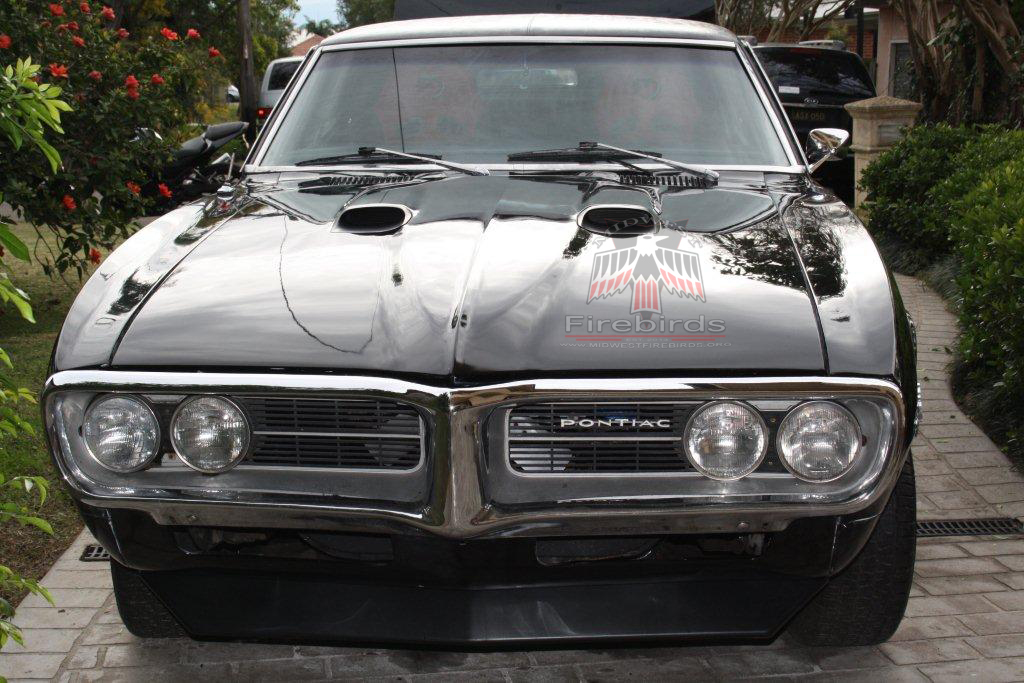 “I got a very good price on the car due to all the work that it needed,’ said Paul. He told us the Australian motor registry is quite strict on inspecting vehicles, necessitating every issue to be addressed thoroughly. Paul wrapped up his overhaul in November 2013. “I found parts surprisingly cheap and alot readily available in Australia. Parts are actually cheaper than Australian cars from the same era.  The construction of the vehicle has some similarities with a few General Motors cars we have in Australia from that era, and a few I have worked on,” said Paul. 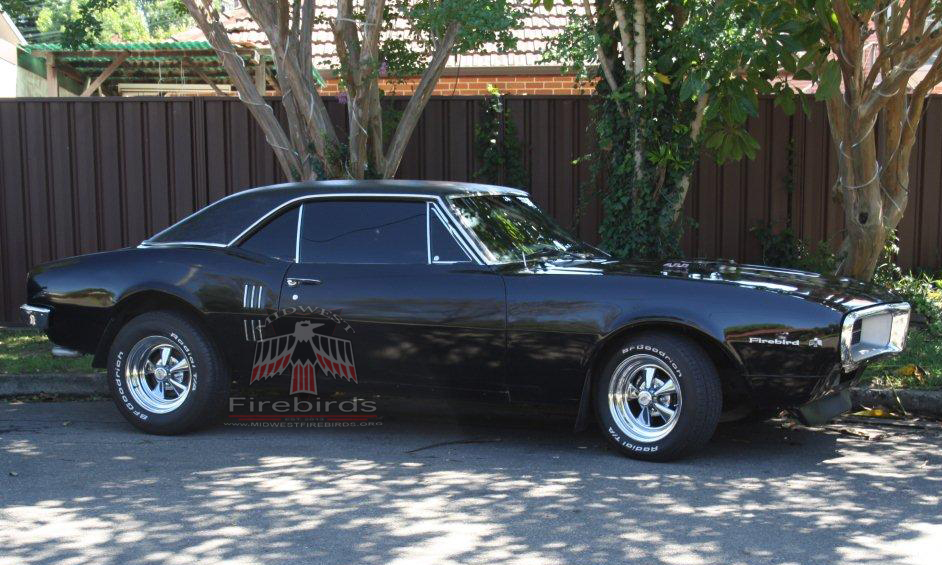 The Pontiac enthusiast does drive his American muscle car in the Outback and savors every minute of it. “I love driving it, and yes it drinks (fuel) like a Scottsman. It sounds awesome and turns heads everywhere, especially in the late afternoon for some strange reason. It rattles and squeals and makes a few noises here and there.” While most recognize it as vintage muscle, its brand is sometimes called into question. “Unfortunately a few people have asked if it is a Mustang!’ said Paul. While the Firebird is out on the roads down under, Paul has more plans in the works. “There are a few more things that require attention. But my main aim was to have it driving ASAP so they can wait till later this year.” 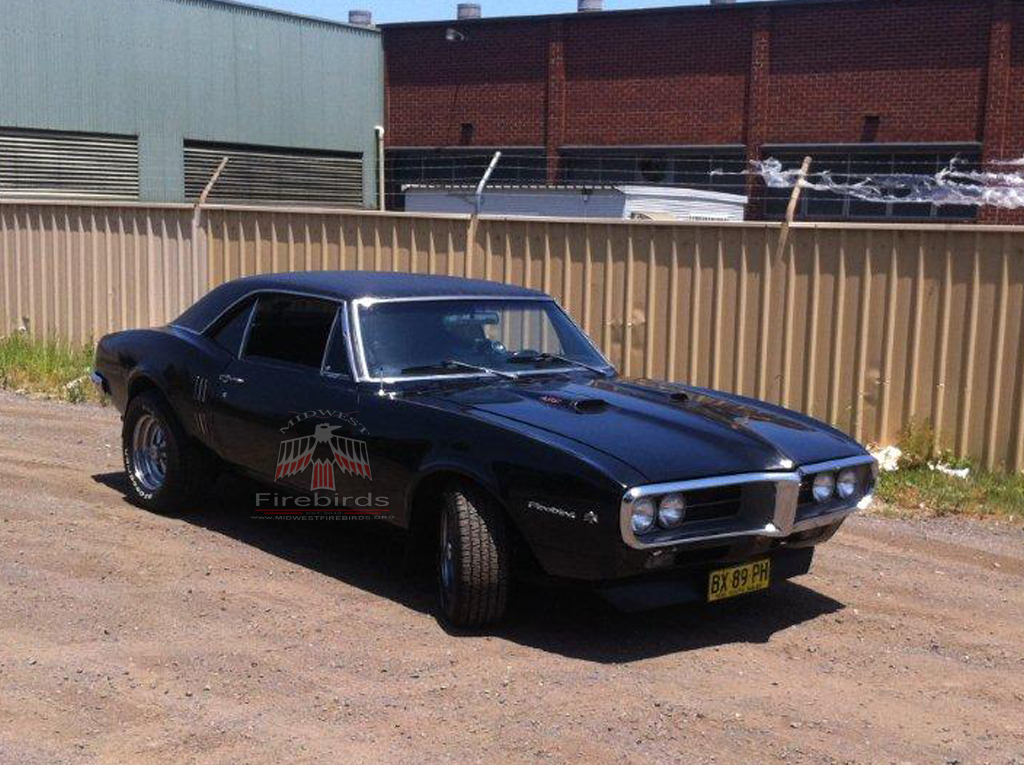 **Do you have a Firebird somewhere around the world? Let us know and we may feature you in the next Global ‘Birds! Send us some pictures and info to info@MidwestFirebirds.org**