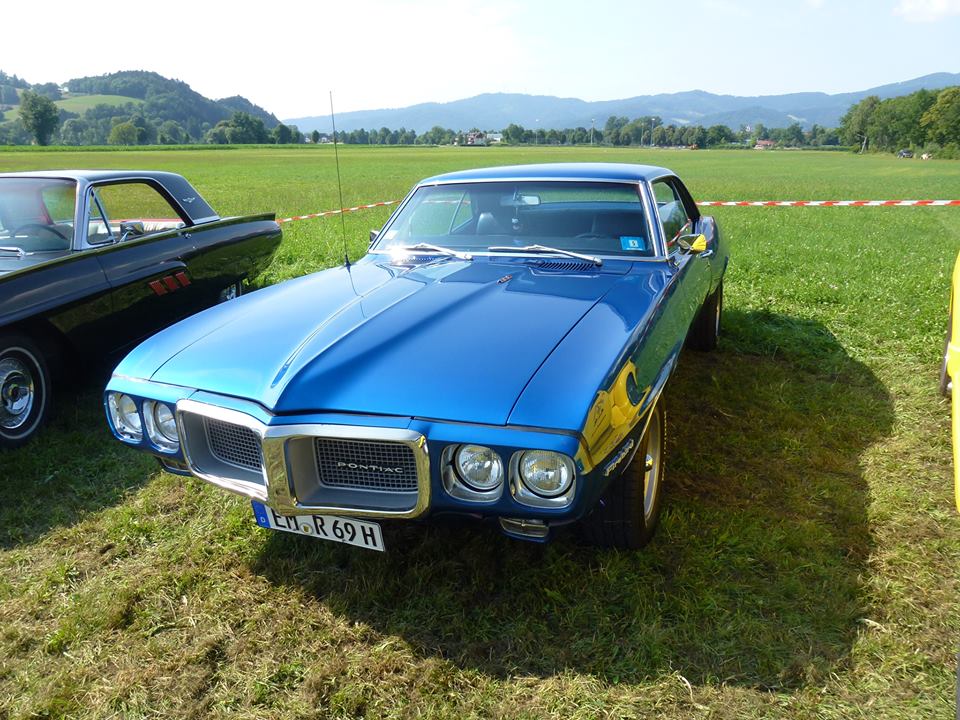 What a beautiful setting for a local car show!

It’s so exciting to see our first gen Firebirds at a local show because we know how rare they are, but when you hear about a first gen Firebird in a foreign country, you really stand up and take notice because you understand just how rare that occurance is.  Last year we learned about Heinz Rosch from Kollnau Germany, and his beautiful 1969 Windward Blue 350 coupe when he contacted us on our Facebook site.  Through Facebook, he was able to share some great photos with us and his story about this vintage American muscle car.

“I`ve always been interested in old cars in general, especially the VW Beetle.  I own a model from August 1967 which sadly is not running right now because it is taken apart and hanging from the ceiling.  That will be my project when I can find the time.”  (His girlfriend interjected, “it`s been hanging there for almost 17 years!”)  “When I met my girfriend we started to go to some American classic car meet ups because that was what she had always been interested in. A friend frequently imports some of those beauties as a hobby and we always went to have a first glance as soon as possible. Every time there are different models and different years to discover.” 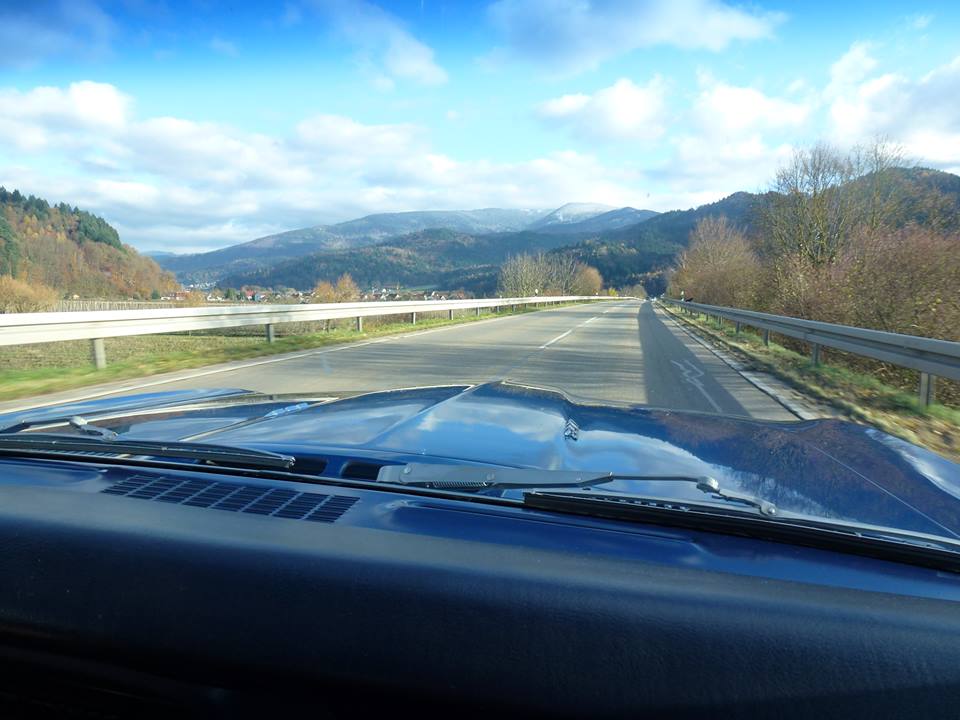 What a gorgeous cruise!  In the Bavarian mountains on December 1st, 2013. Can you see the snow off in the distance on the mountain tops? 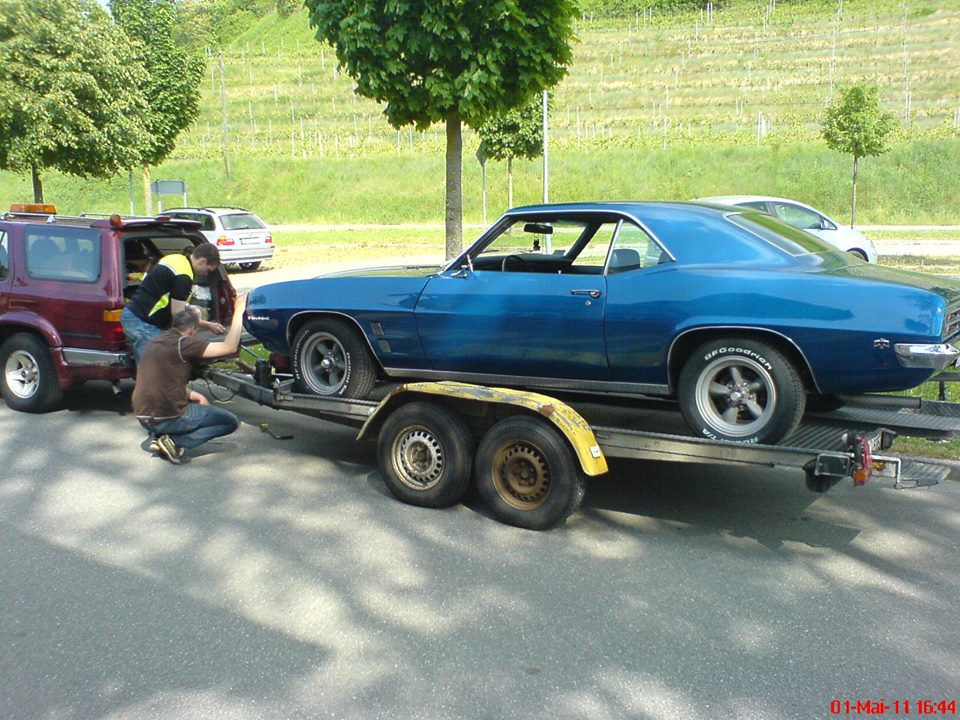 Old cars breakdown, as we all know – His first experience with car problems. Luckily he had a friend with a flat bed trailer to help.

“In July of 2010 he had bought a blue metallic 1969 Pontiac Firebird. It was love at first sight. The car had been a project car and was in pretty good shape. You could see that the former owner had taken his time restoring the Firebird and he wanted to put it back to its original design with only minor changes. So long story short : the Firebird found a new home in our garage. We had to change a few things due to German law like headlights and tire size and in the future we might change the rims and the shifter back to the original design. But sadly parts are expensive and shipping cost are high, so we are taking our time. We don`t ever want to sell it !” 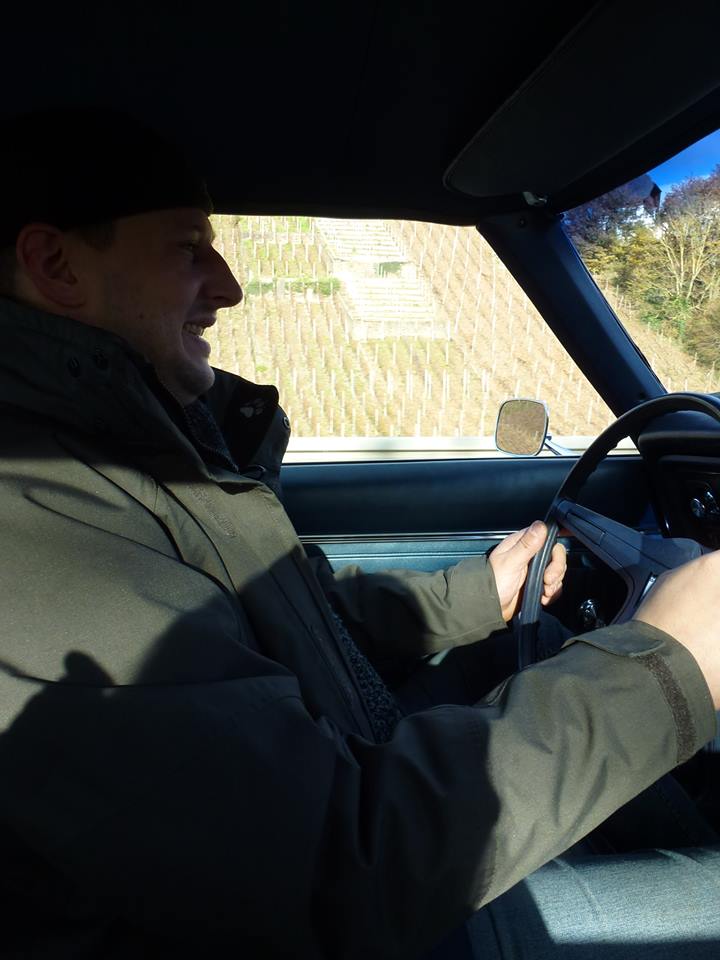 Heinz, behind the wheel of his Firebird. “It is so rare to see these kind of cars in Germany, and they are so much fun to drive!” 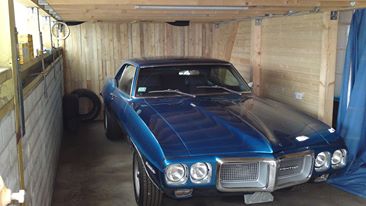 In Germany, this is called the “Autoport”, and this American beauty looks great in there. 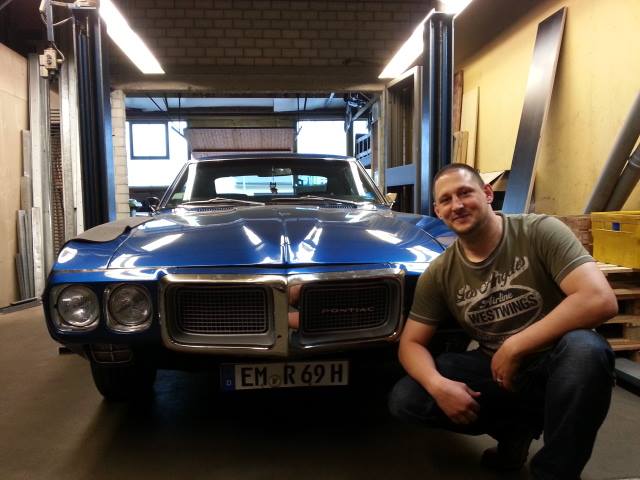 Here’s Heinz posing with his pride and joy.

Heinz added, “We are constantly trying to get as much information of the car as possible and so far we´ve got a ton of documents. As you might know there is always something to change or repair on cars that age and I´m trying to learn as much as I can. Through reserch I found your site and I am glad that there is now the possibility to get in touch with people like you to learn and ask questions if there is a problem. As far as I know we own the only 1969 Pontiac Firebird in the area, maybe even in the state!”