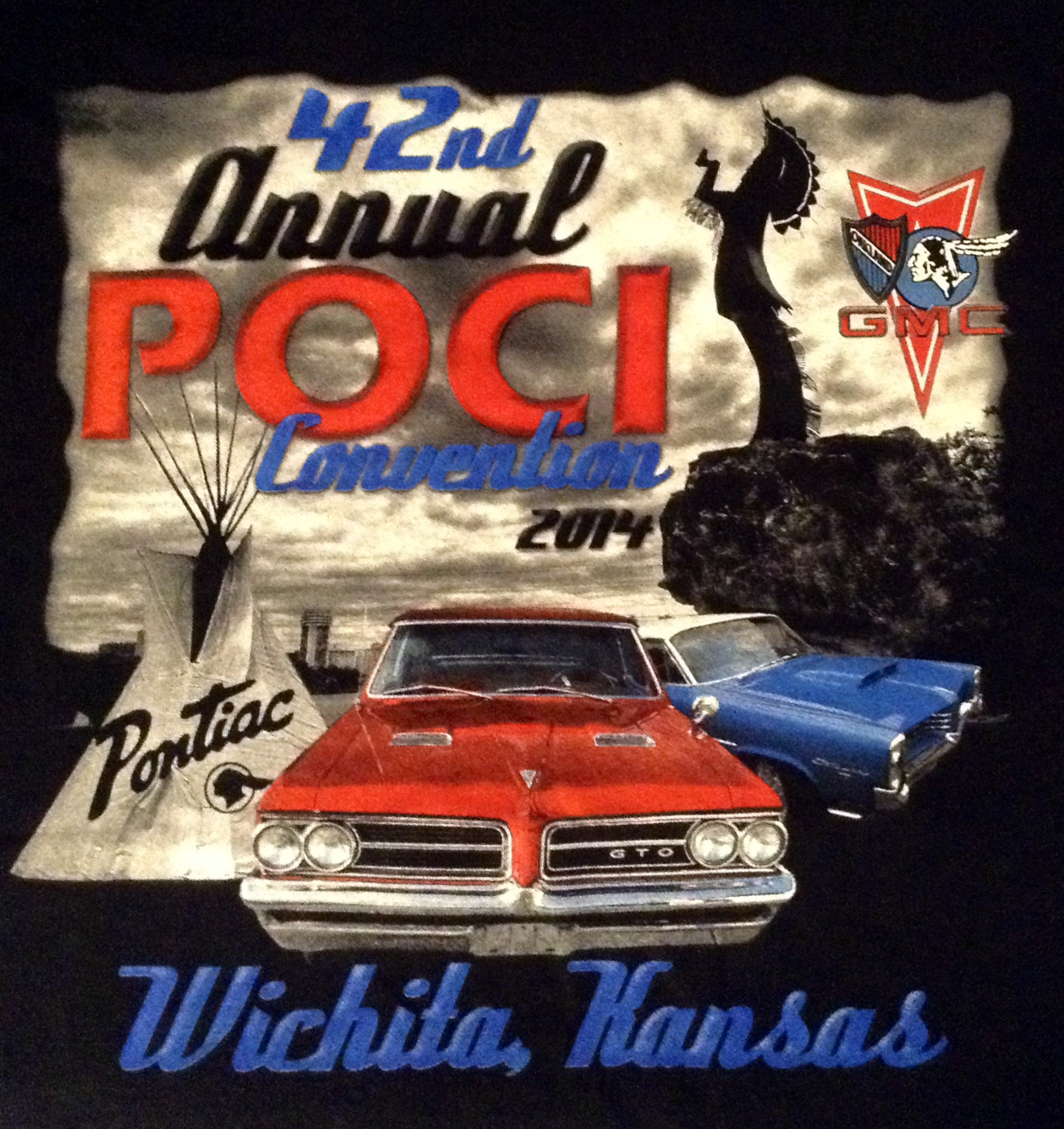 If you love Pontiac’s, Wichita was the place to be the third week of June, as the Pontiac Oakland Club International (POCI) had its 42nd annual convention.  We were fortunate to have 3 of our Midwest Firebirds members there to take pictures and comment on the event.  Another one of our members was chosen to judge the FGF class, but unfortunately, was unable to make the trip.  This is such a big story we will post it in two parts.  Part one will highlight the overall convention with pictures of all kinds of great Pontiacs and a few Oaklands.  Part two will focus on the first generation Firebirds that were there.   We’ll get started with club member Larry DeLay’s comments on his experience:

It was in the neighborhood of a 1400 mi. Round Trip from the Chicagoland area to Wichita, Kansas for the 2014 POCI Convention, but well worth it! The host hotel, the Hyatt Regency Wichita, and the adjacent Century II Convention Center proved to be an outstanding venue for the event. This facility provided indoor parking throughout the event for Road Warrior, Popular Vote, and Point Judged cars. Although it was very warm outside it was quite nice indoors! In addition, the entire Hyatt staff was extremely professional, polite, and friendly – and their burgers and fries are the best!

The first person I ran into late Wed. when we arrived was Don Keefe, editor of Smoke Signals and friend.  I was wearing my Midwest Firebirds tee-shirt and made it a point to talk to him about our club and how much fun we are having with our first generation Firebirds, and all the interest we have generated in the short time our club has been around.   With the demise of High Performance Pontiac magazine, he is very determined to bring together all facets of the hobby and eliminate the bickering and separation that sometimes divide us or splinter groups.  He made a passionate presentation to the POCI leadership on Tuesday which I understood was well received.

There were many activities planned for family and enthusiast alike. They ranged from tours of local attractions, to seminars by noted Pontiac Celebrities.   There was coloring, and model building competitions for the children as well as valve cover racing! There were Chapter meetings and breakfast (Oaklands) and lunch (Road Warriors) cruises too. On Friday night there was drag racing at nearby Kansas Int’l. Drag way and even a Fireworks show at a nearby location adjacent to the hotel! And these activities represent just a sampling of things to do.  The cars there were all fantastic, however, I was surprised to find only a half dozen or so of our “Early Birds” (’67 –’69).  It just goes to show how rarely seen our first generation cars are. 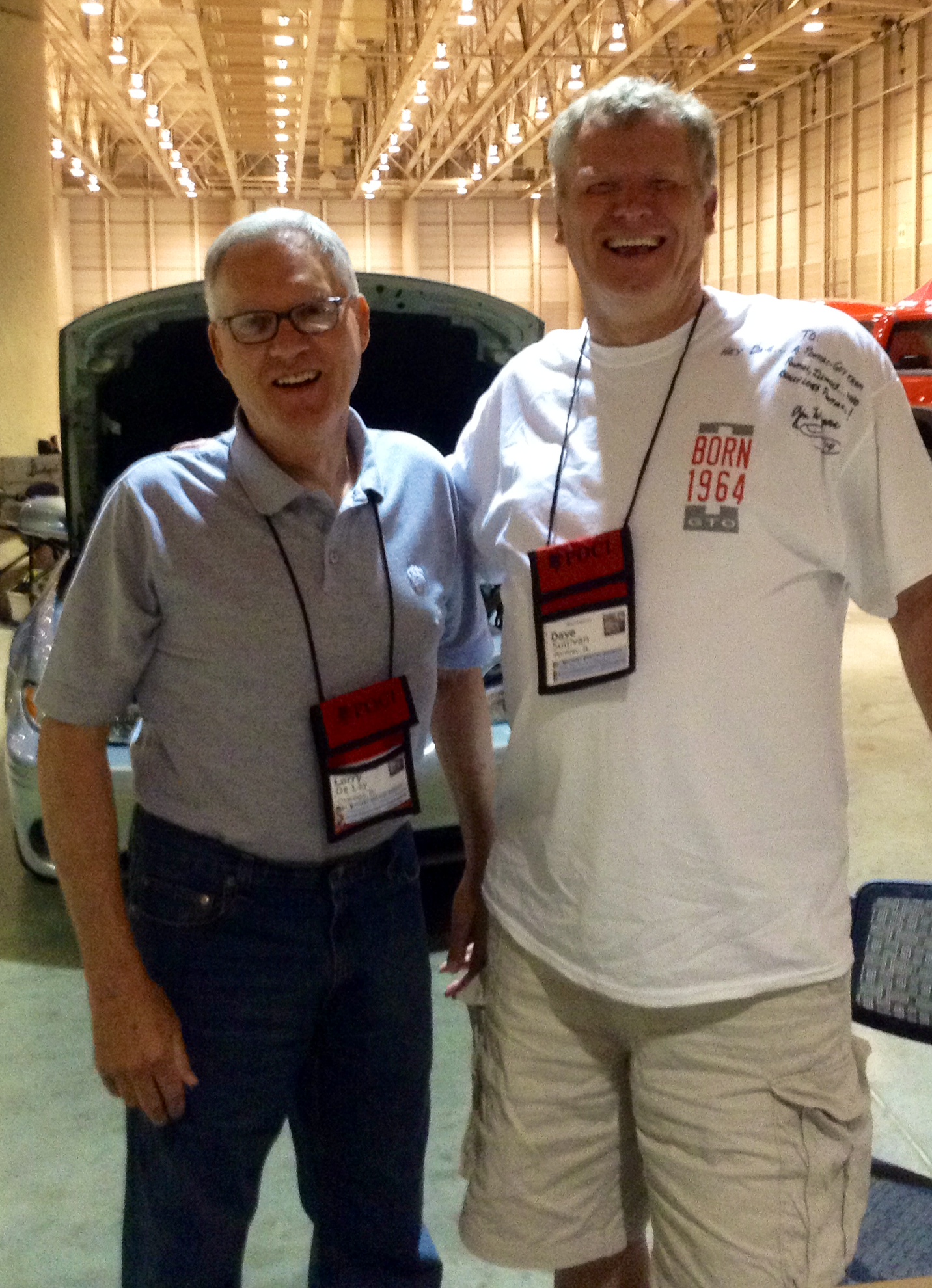 A few “Road Warriers” in their own right. Club members Larry DeLay and Dave Sullivan at the convention – most of this post and pictures are courtesy of these two Pontiac faithful. 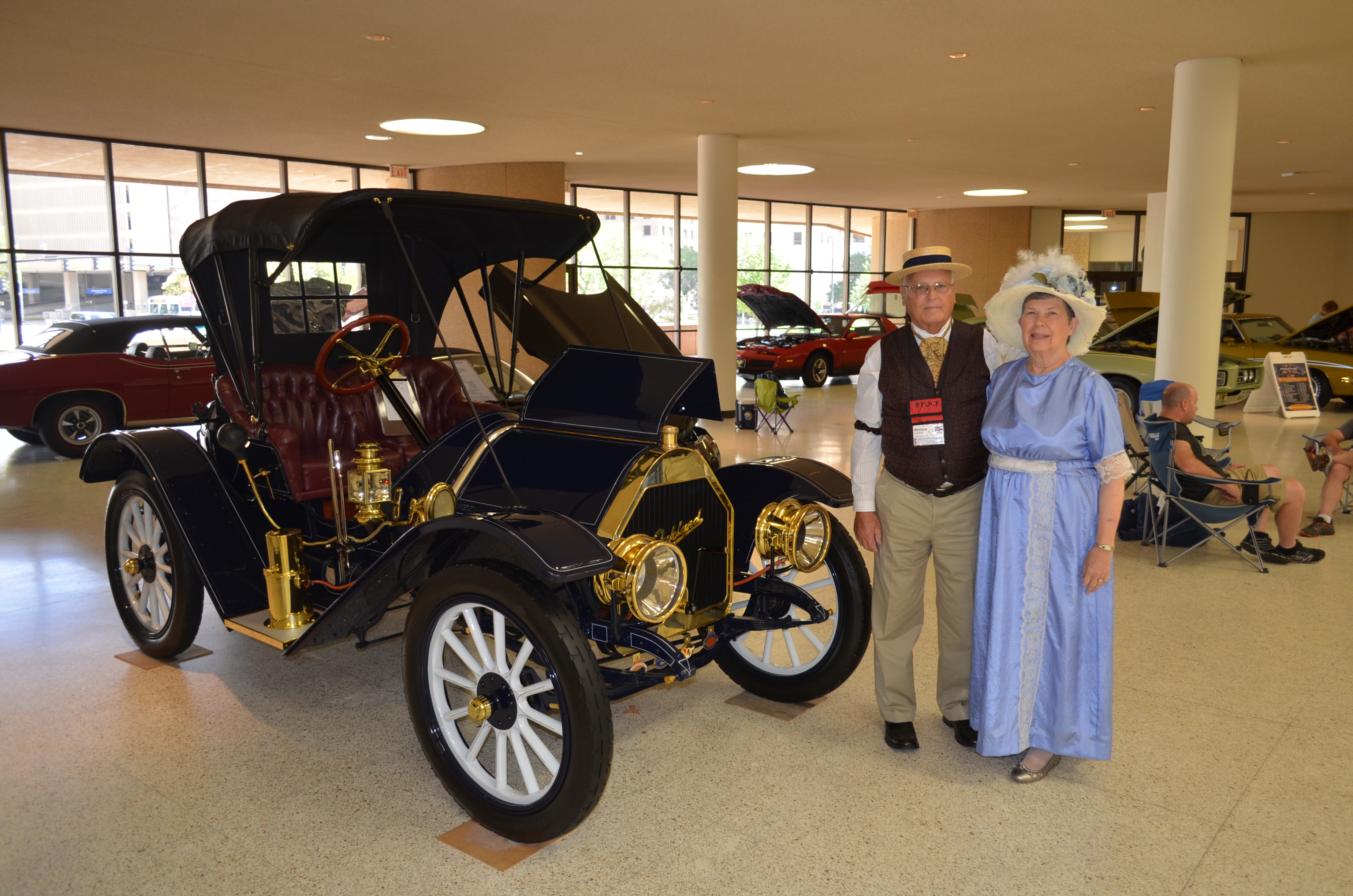 Dave is friends with these owners from Florida, who came dressed for the occasion with their beautifully restored, 1910 Oakland. He told us that this car was recently displayed in the Pontiac Oakland Automobile Museum, in Pontiac, Illinois for over a year. 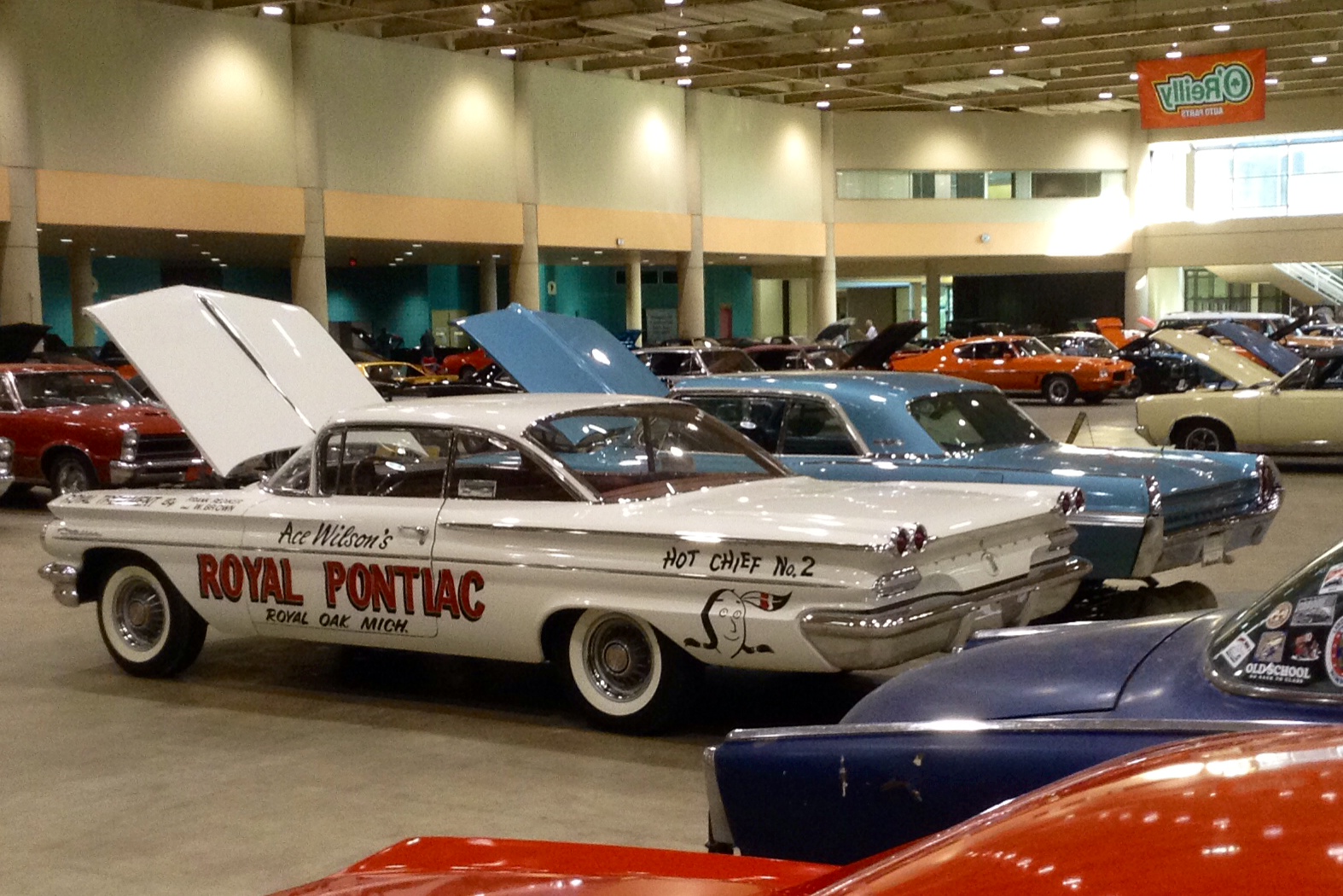 There was a whole area set up with vintage race cars like this one, from Royal Pontiac. 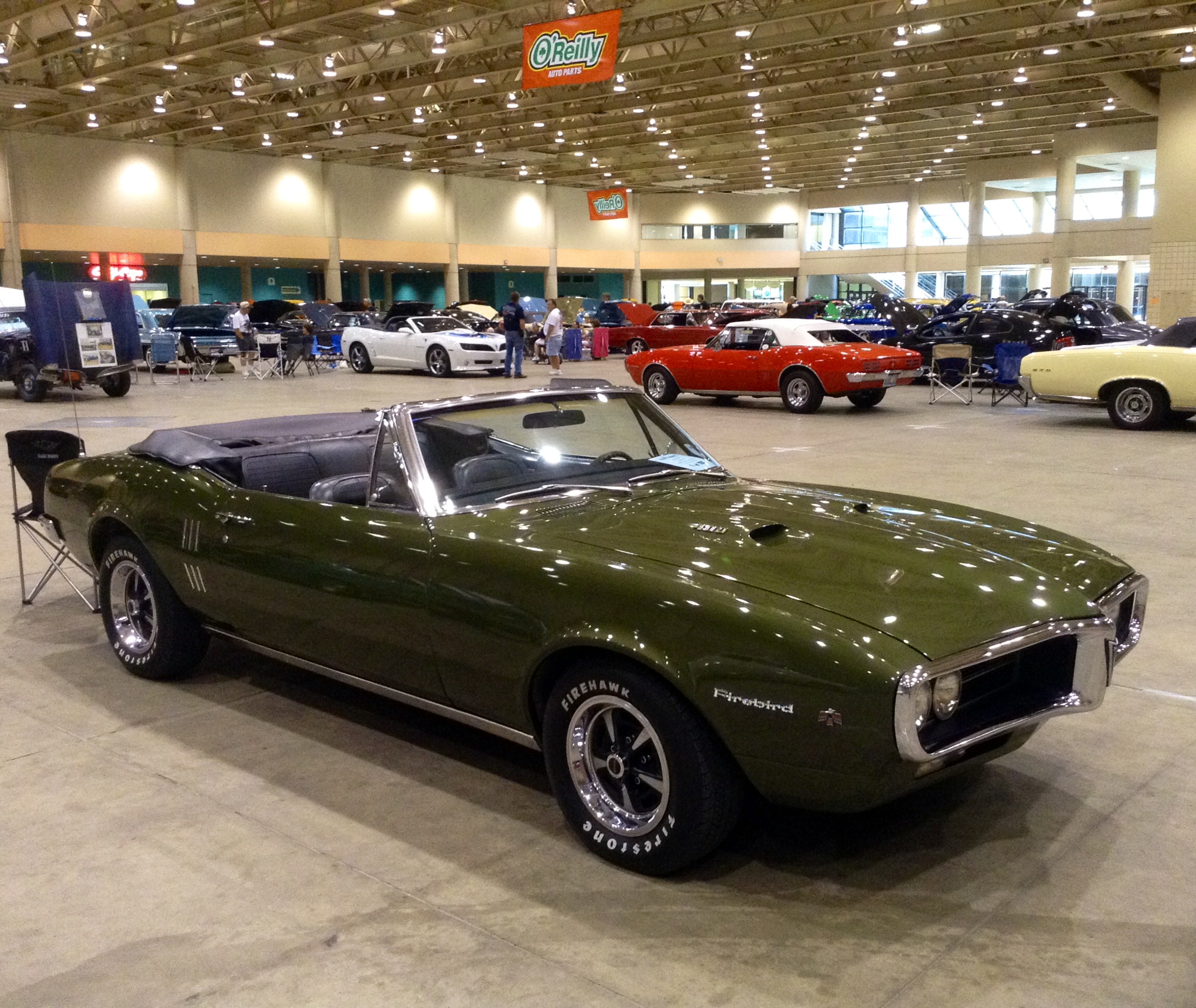 Just to whet your appitite for FGF’s – We have lot’s more pictures of our favorite Pontiacs for the next post – like this 1967 Verdoro Green Convertible 400. 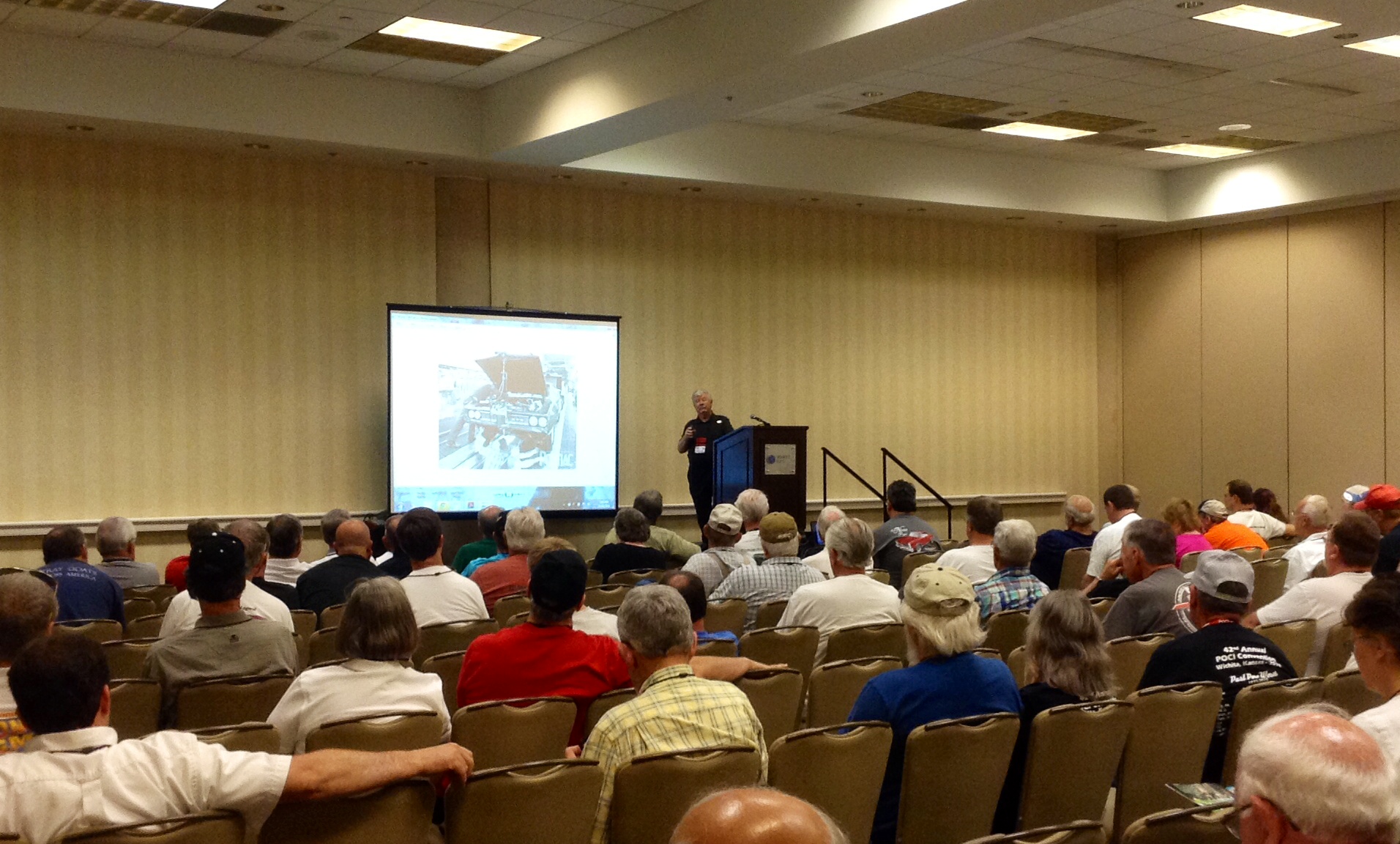 There were plenty of great seminars and Pontiac information at the convention. 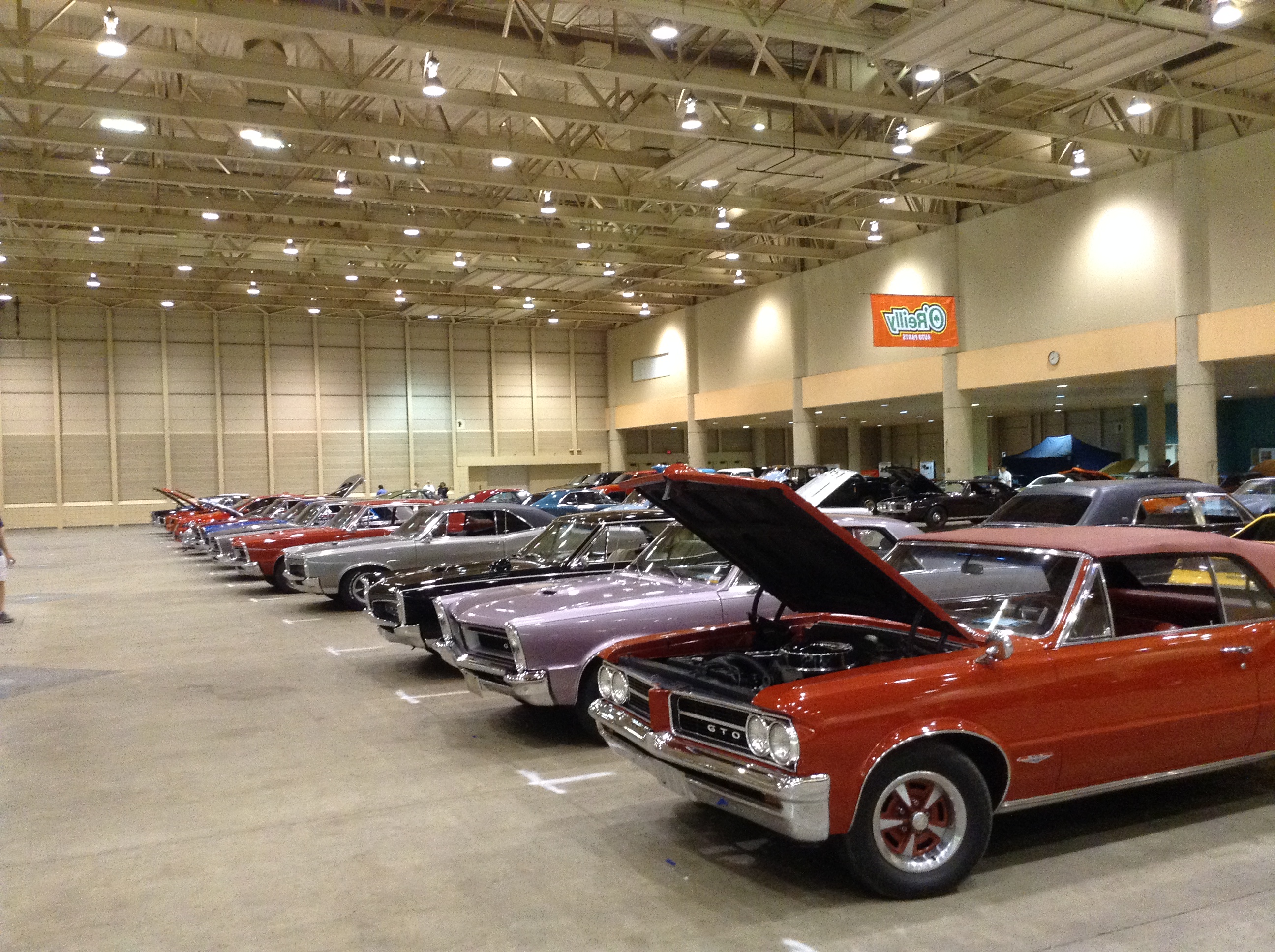 Nothing better than a room full of vintage Pontiacs and having all day to enjoy them! 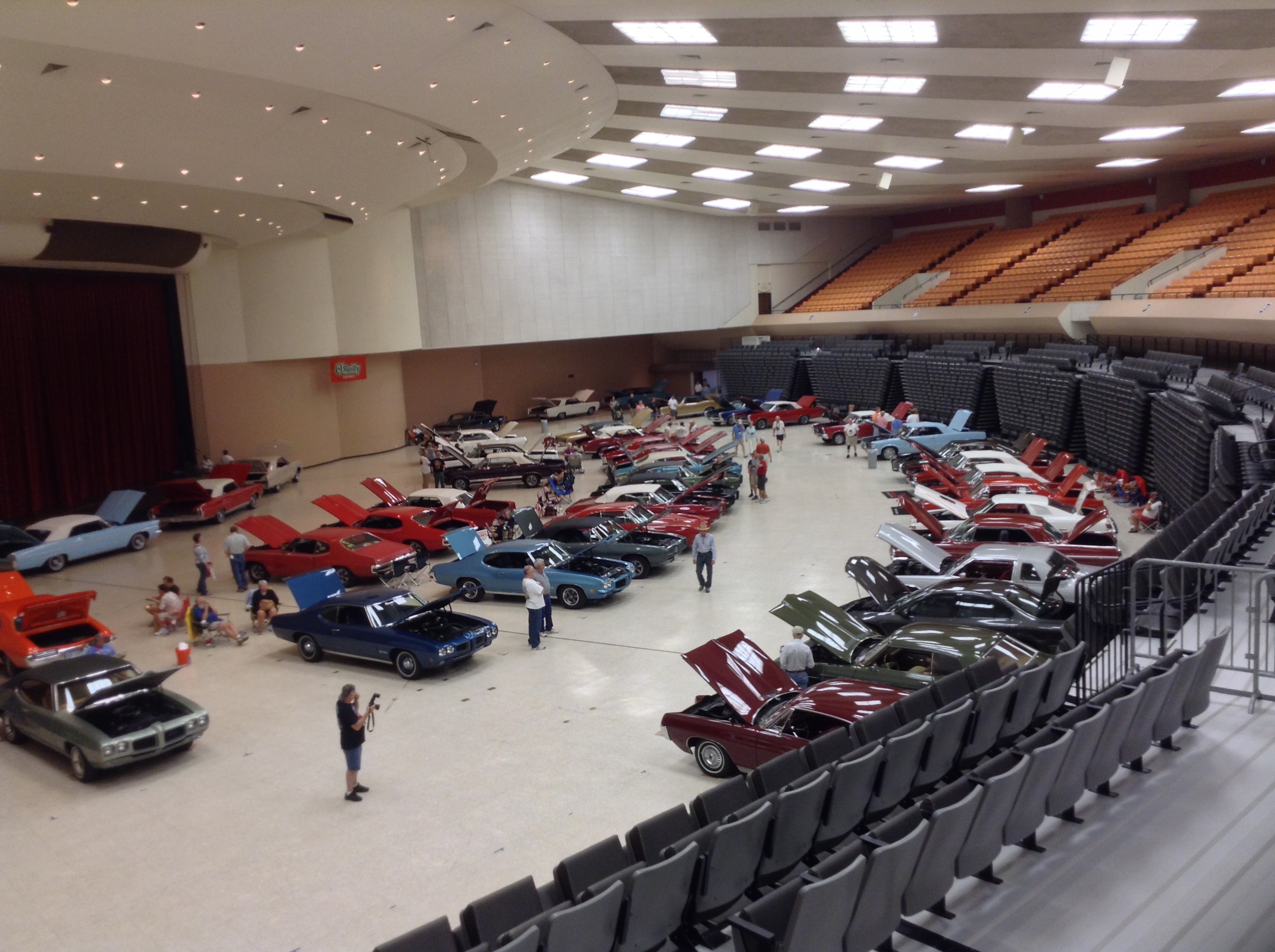 This is a picture from one of the Popular Vote judged car rooms.

Member Dave Sullivan, was also there showing his famous 1967 Torch Red 350 convertible.  (which we will feature in an upcoming post).  I asked him what he loved most about the convention, and this is what he said:

Wichita was fun and it’s my 5th convention.  I think my number one highlight was attending Jim Wangers presentation  – it was Fantastic!  He emphasized his joy of working with John DeLorean and  being a important part of the GTO team. He is a dynamite speaker and may not be attending future conventions again at the age of 85. His quote of the show was telling a super energized Pontiac group that one of his family members asked where he was headed on this trip.  He said he was going to give a GTO presentation.  The response was “How many ways can you tell that …. GTO story!”   Everyone in the packed room roared with laughter – and it was obvious they would always want to hear the story he has told hundreds of time.

Other highlights for me were meeting Mike from Cooper racing and hearing many of his stories, hanging out with a Wichita Pontiac Dealership Legend Joe Stout and family, and of course being able to drive to and from Wichita as a “Road Warrior” class. of POCI.  Finally, I really enjoyed meeting many people as I sat at the Pontiac Oakland Museum display handing out info about the Museum and City, of Pontiac. 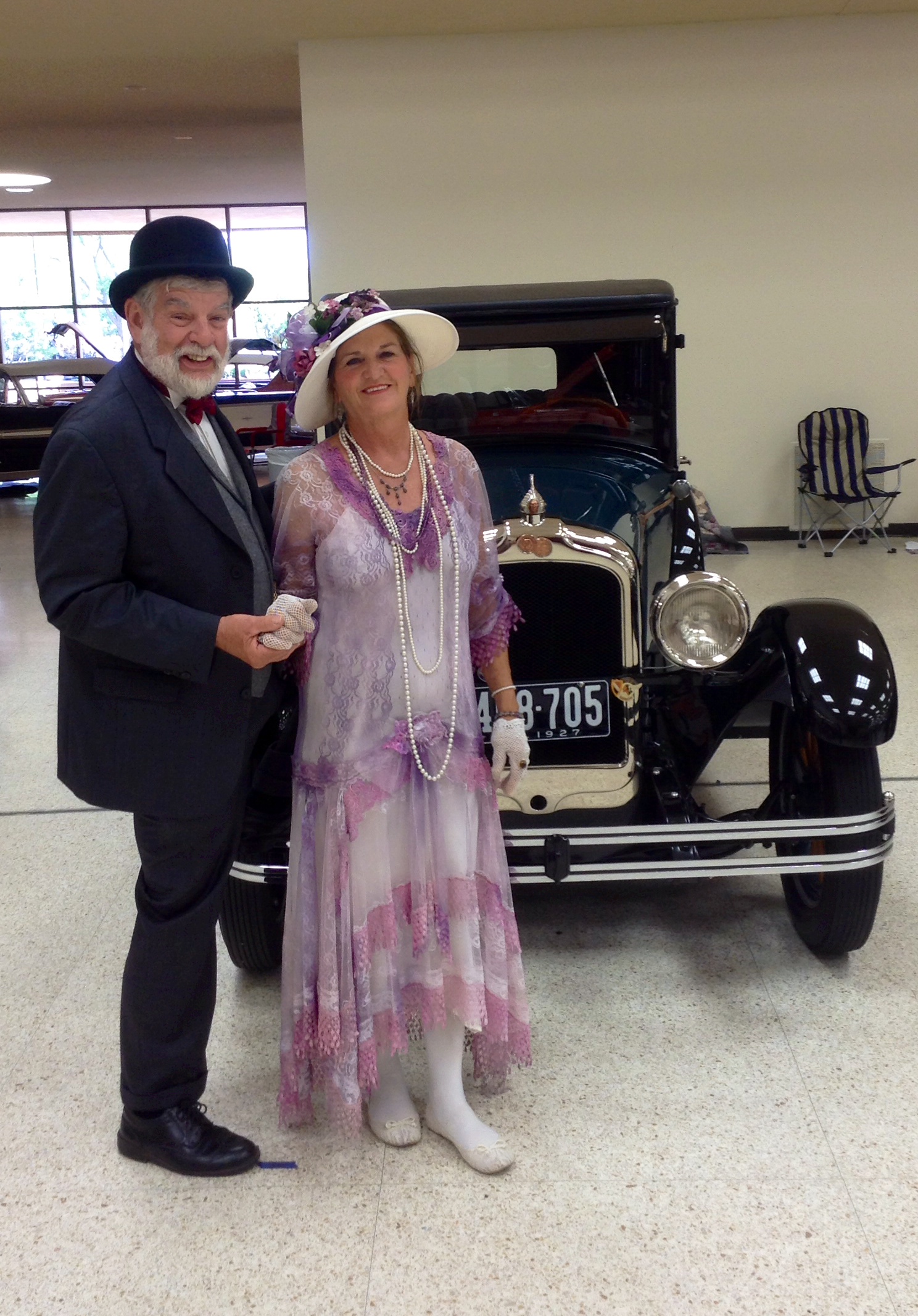 A nice “extra touch” from the owners of this 1927 Pontiac – dressing up in vintage apparel. 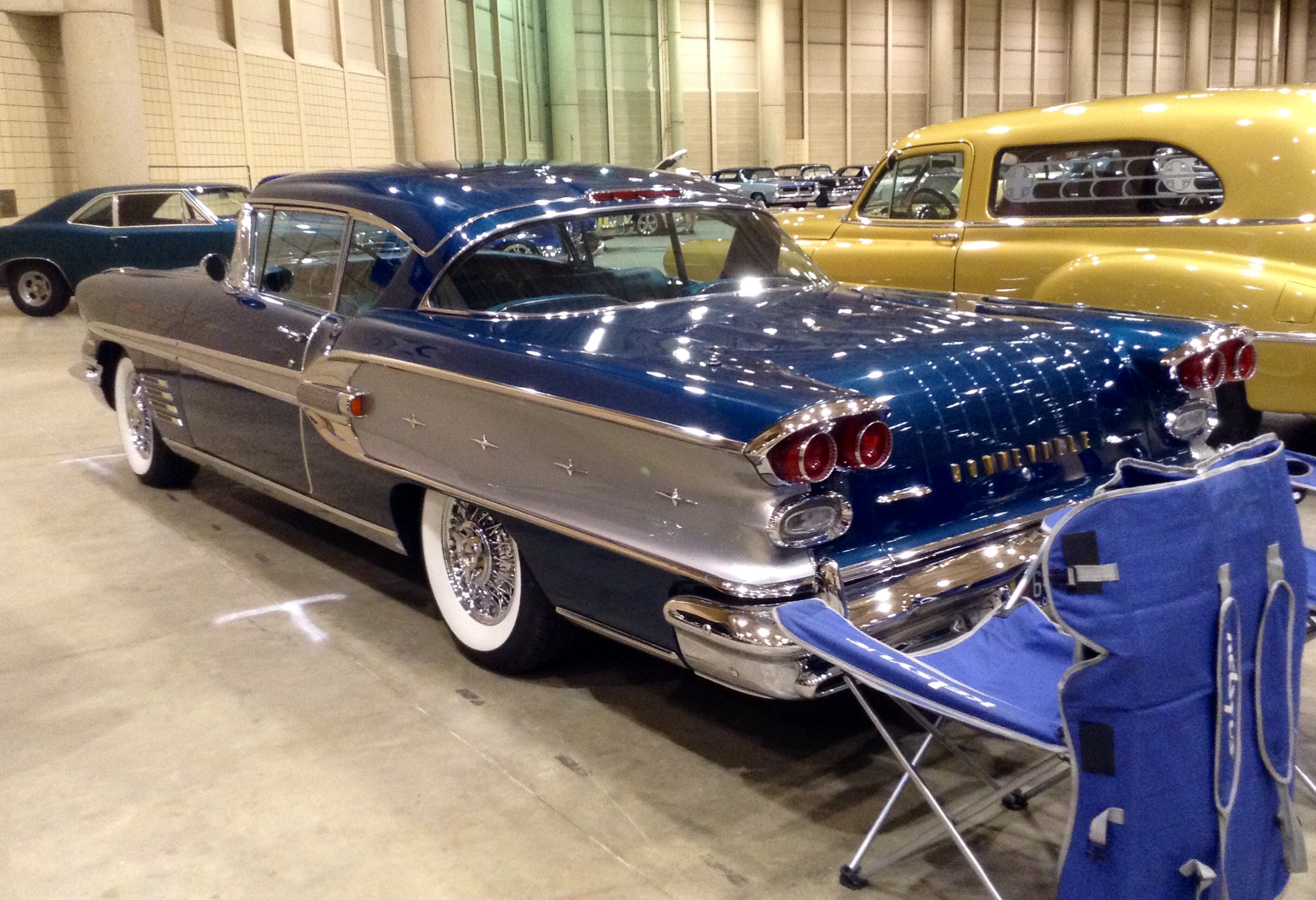 A gorgeous (Squadron Blue?) 1958 Bonneville with wire wheels was shown in a Modified class of Popular Vote. 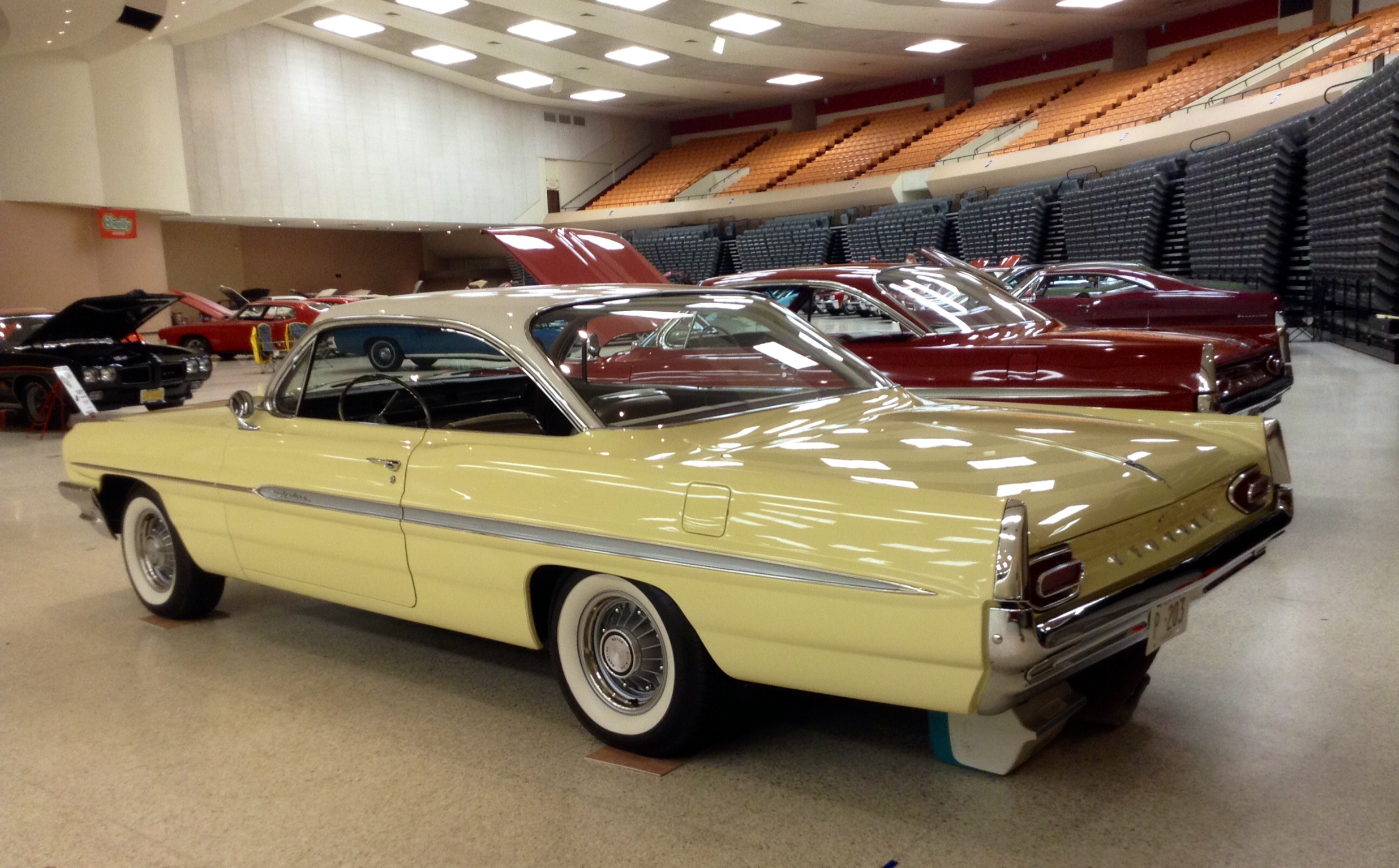 This Bamboo Cream with Shelltone Ivory bubble top is a 1961 Catalina. This is one of Larry’s favorites. It was being photographed by Don Keefe for “Smoke Signals” magazine. 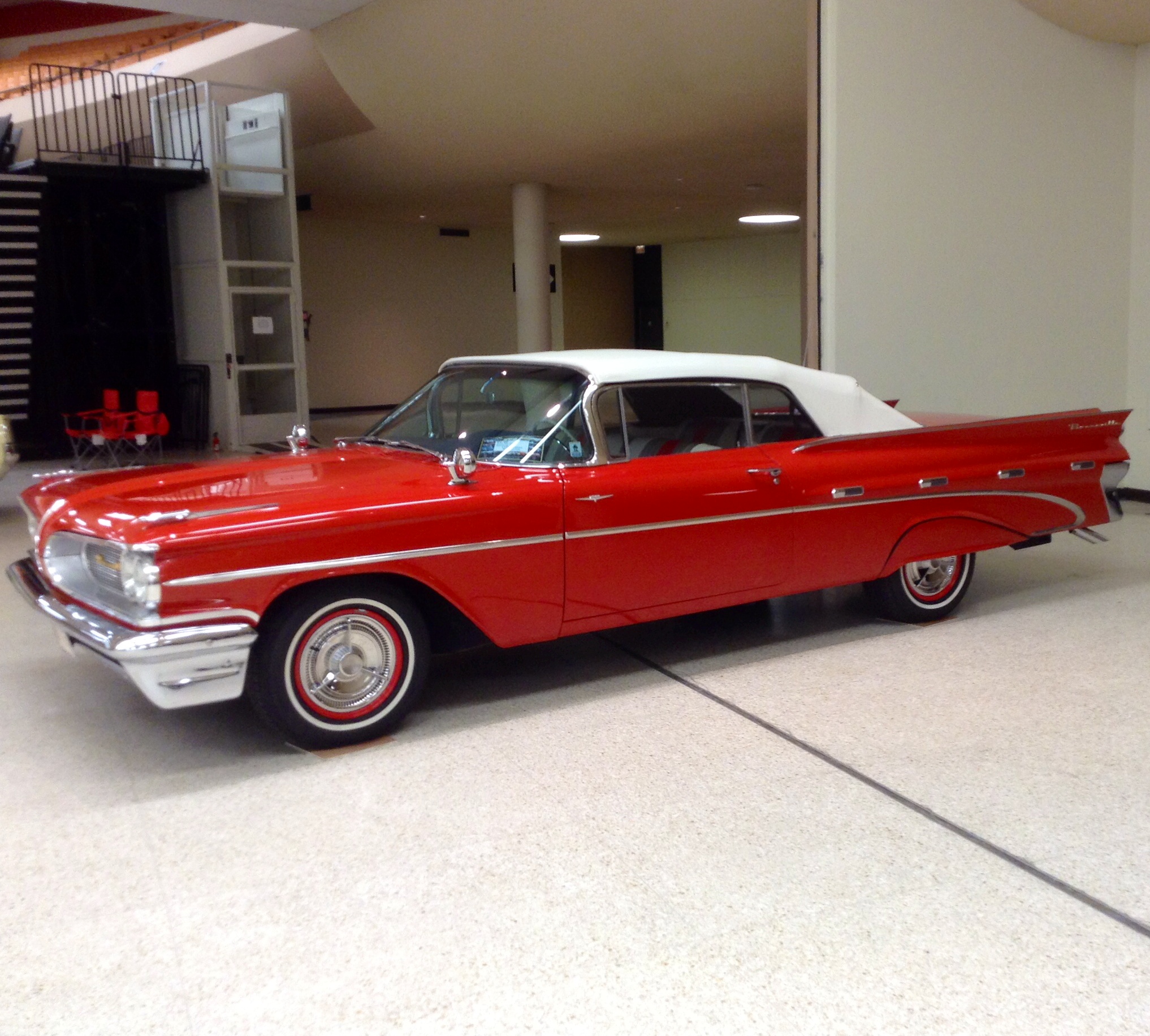 Can you imagine the pure enjoyment of driving this Red 1959 Bonneville Convertible to the show? 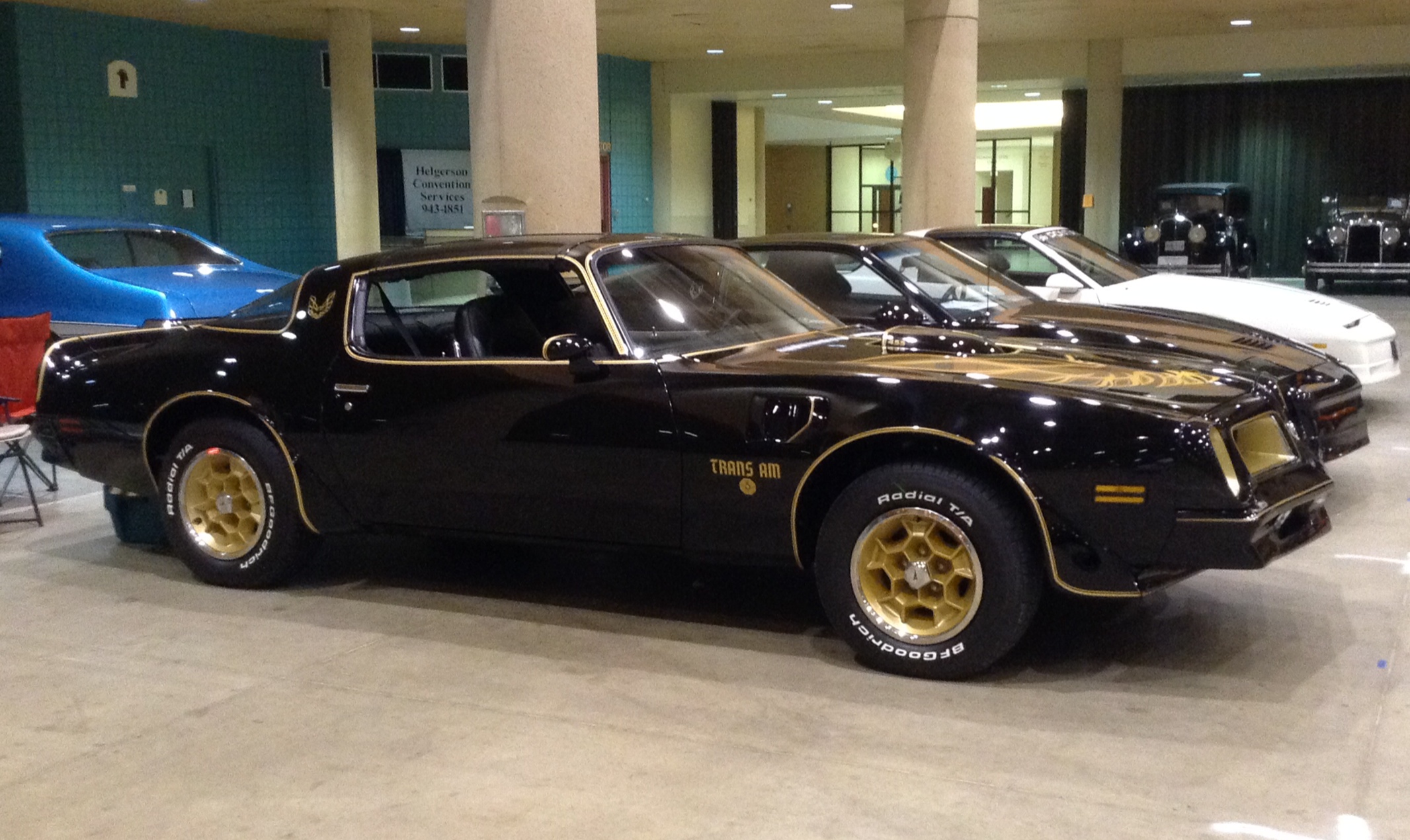 Three beautiful Trans Ams in a row, including this 1976 50th Anniversary Limited Edition Trans Am – one of 500 with the factory 455! 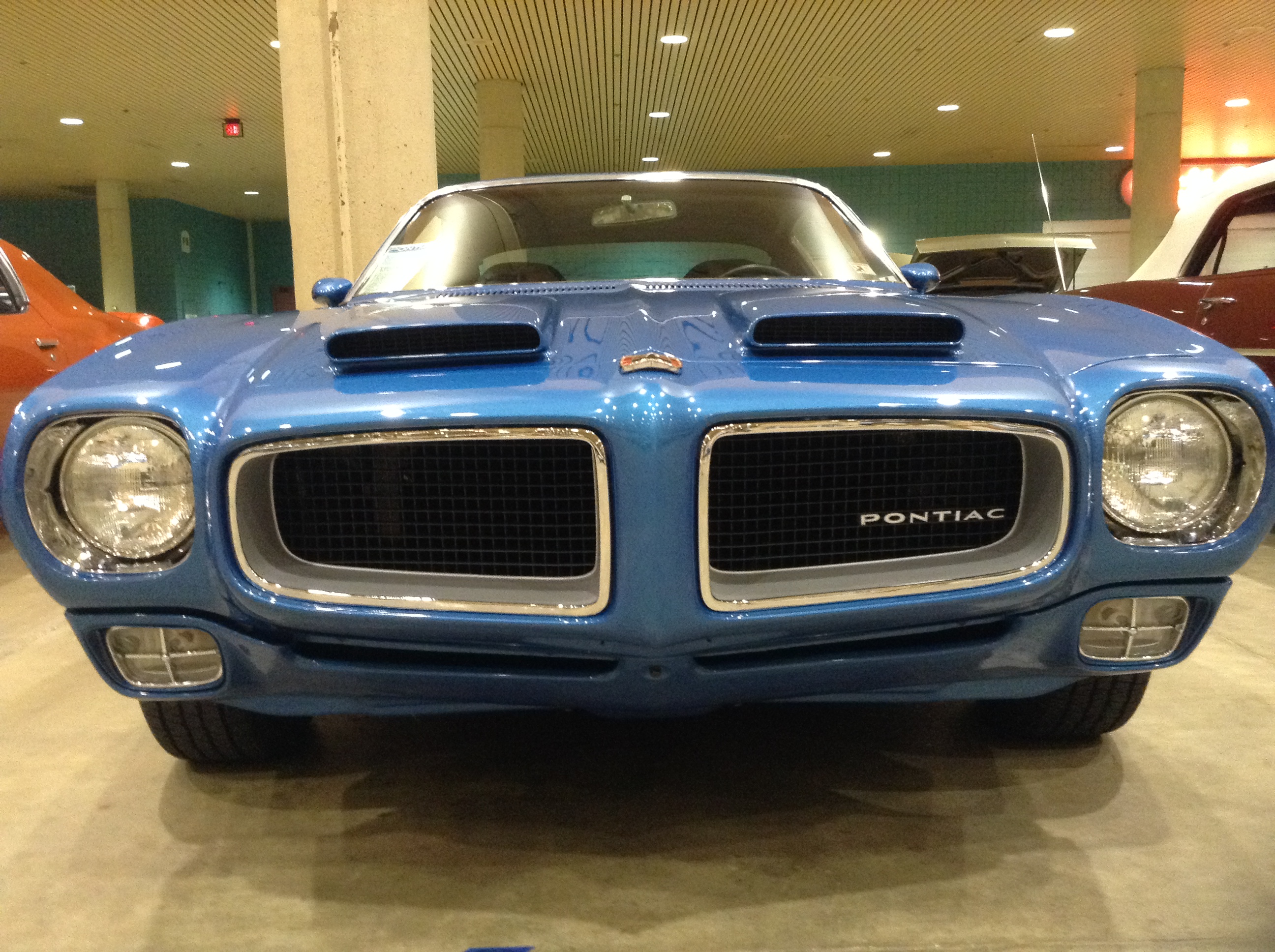 I love the detail in the front and the “wow” hood scoops of this 1971 second gen Lucerne Blue Formula. 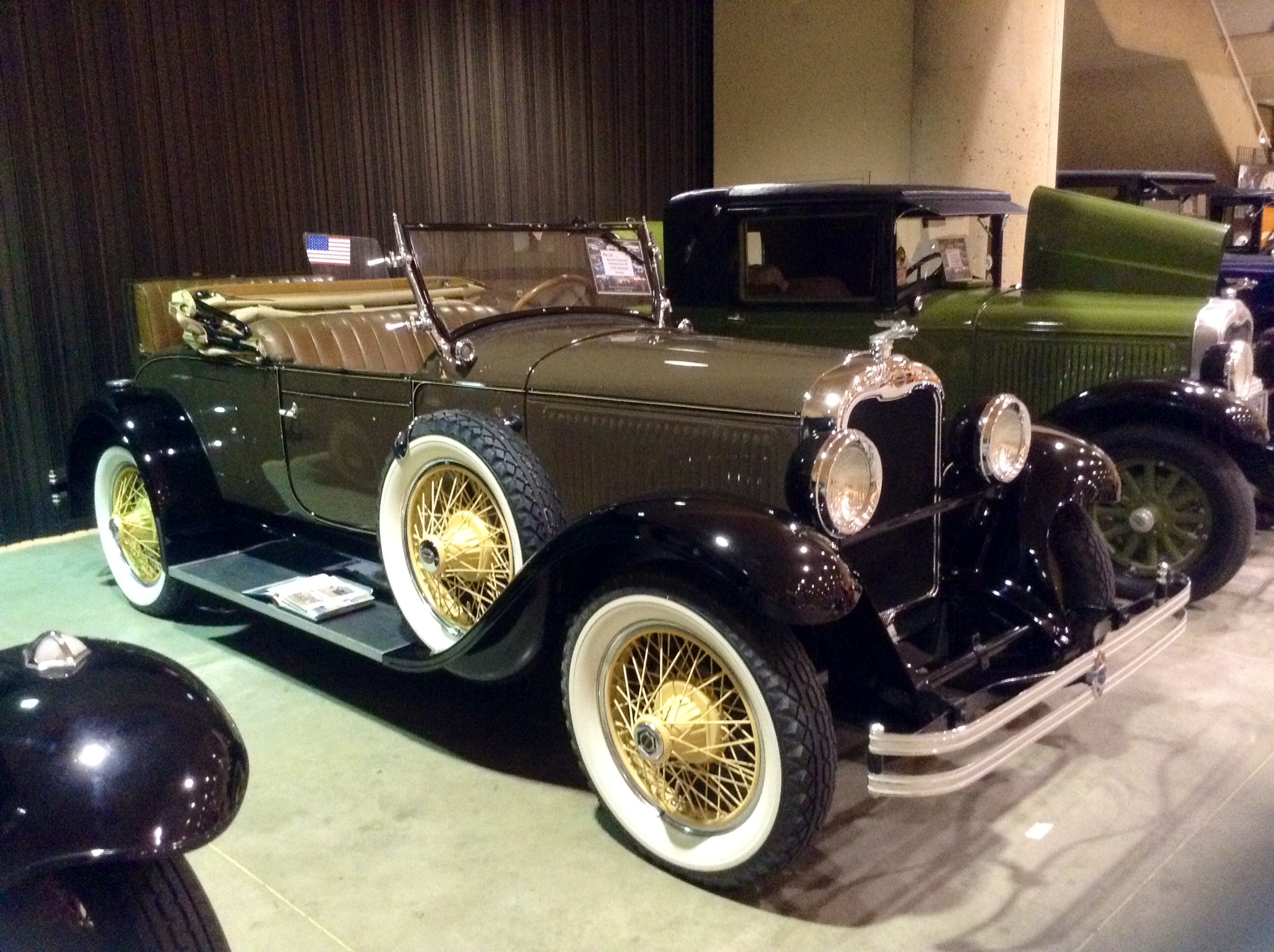 How well do you know your vintage Pontiacs and Oaklands? This convention provides the opportunity to see many of these rare beauties. 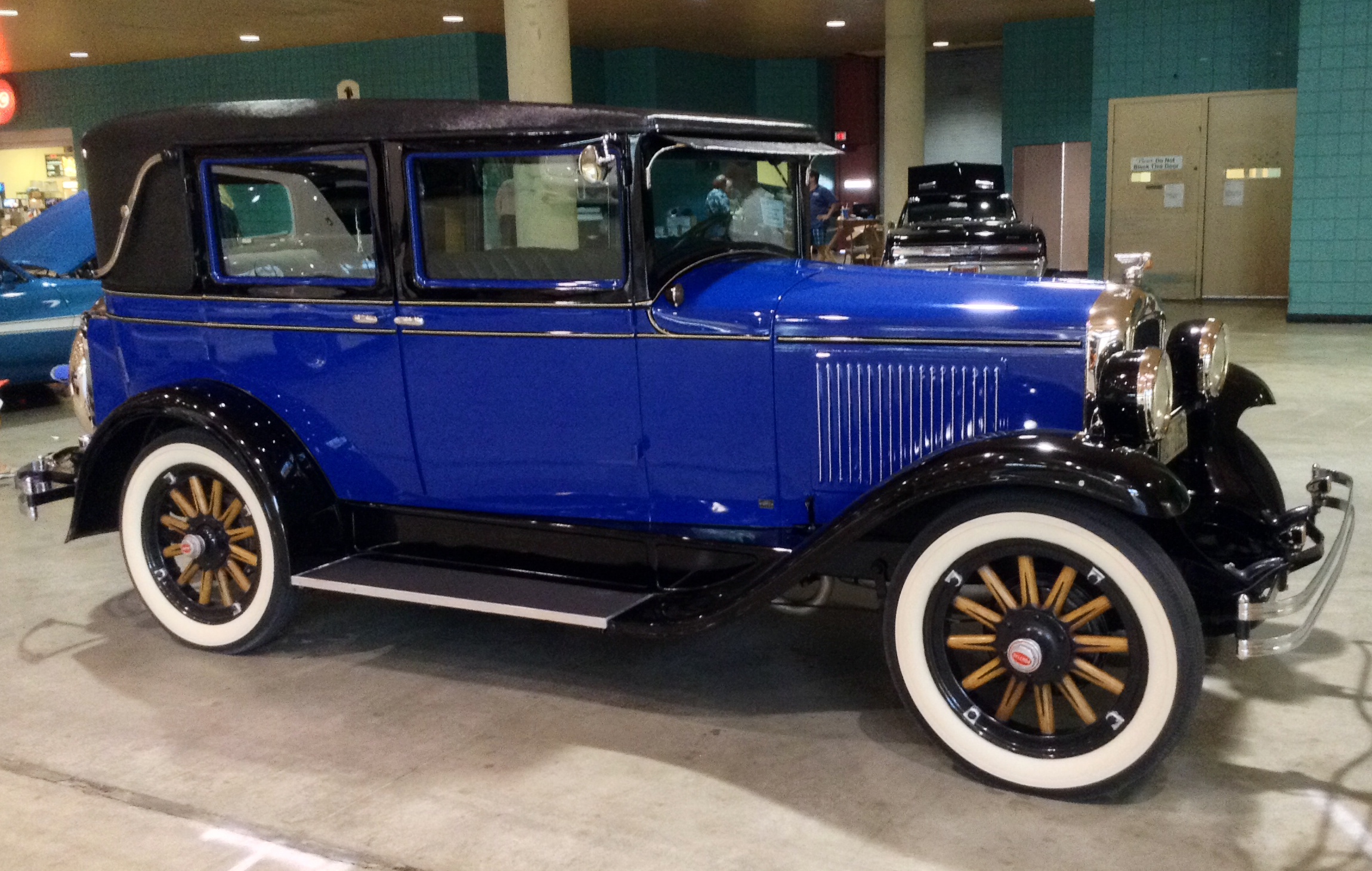 Another stunning vintage automobile all ready for a Sunday drive! 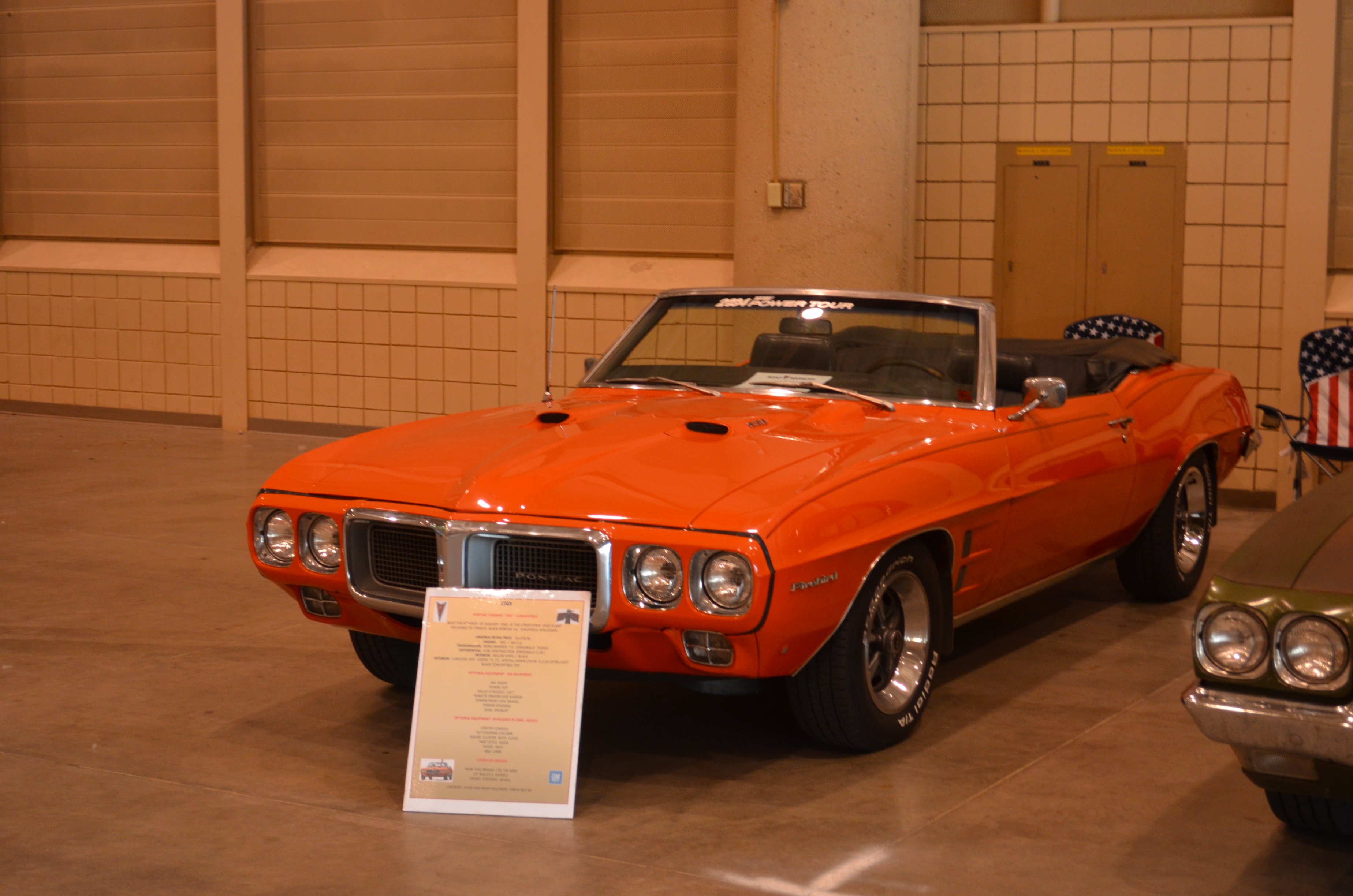 Club member Hank Kollross, from Green Bay Wisconsin showed his beautiful 1969 Carousel Red convertible, in the Road Warriors Class.  He said, I didn’t see Larry or Dave at the show, but I did see Dave’s car  there.  I wish I would have sent out some feelers beforehand, so we could have all gotten together.  I am already looking forward to next year’s show at Louisville KY in July.  This is a little shorter drive for us, and I hope we can get more of our members to come out to the convention next year! 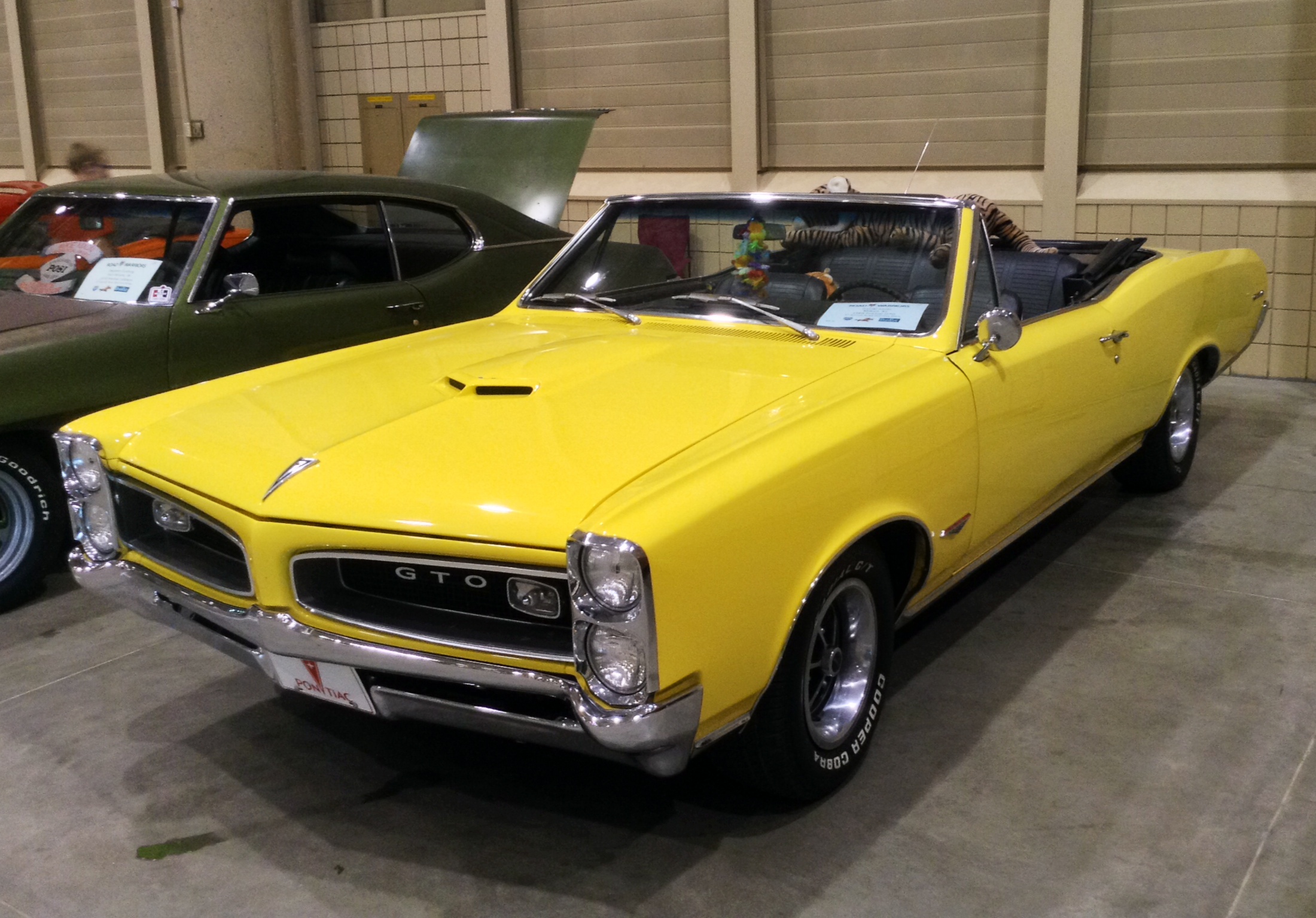 A striking  modern – yellow 1966 GTO was shown as a Road Warrior. This would mean that it was not judged at all as that is the point of the “Road Warrior” designation, a relatively new category for nice cars that just want to come and have fun, thus their lunch cruise. Rather than spend their time cleaning, etc. they prefer activities. Although they can be every bit as nice as the other cars, as this one is. 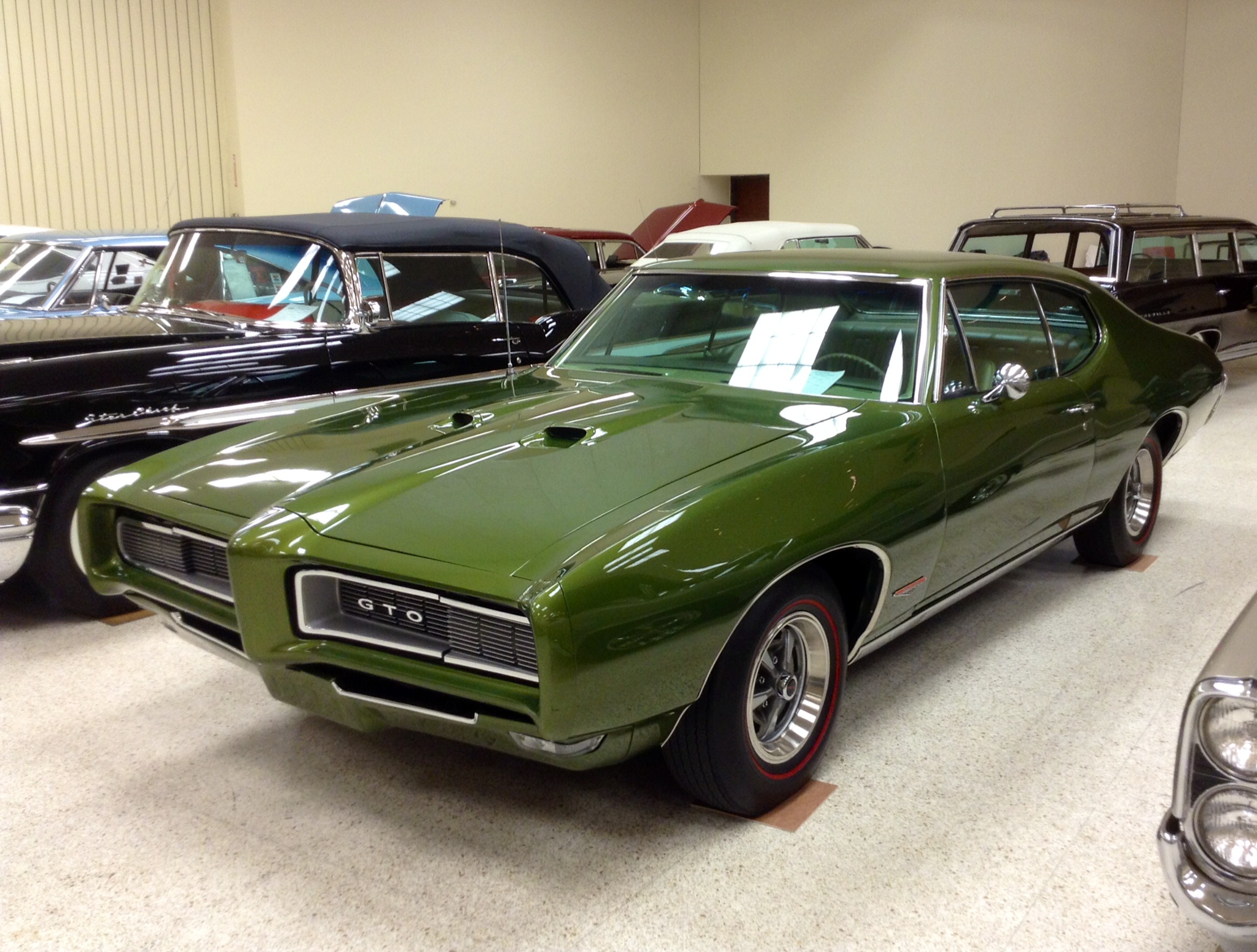 This beatiful 1968 Verdoro Green is a Ram Air I car and features the open hood scoops! 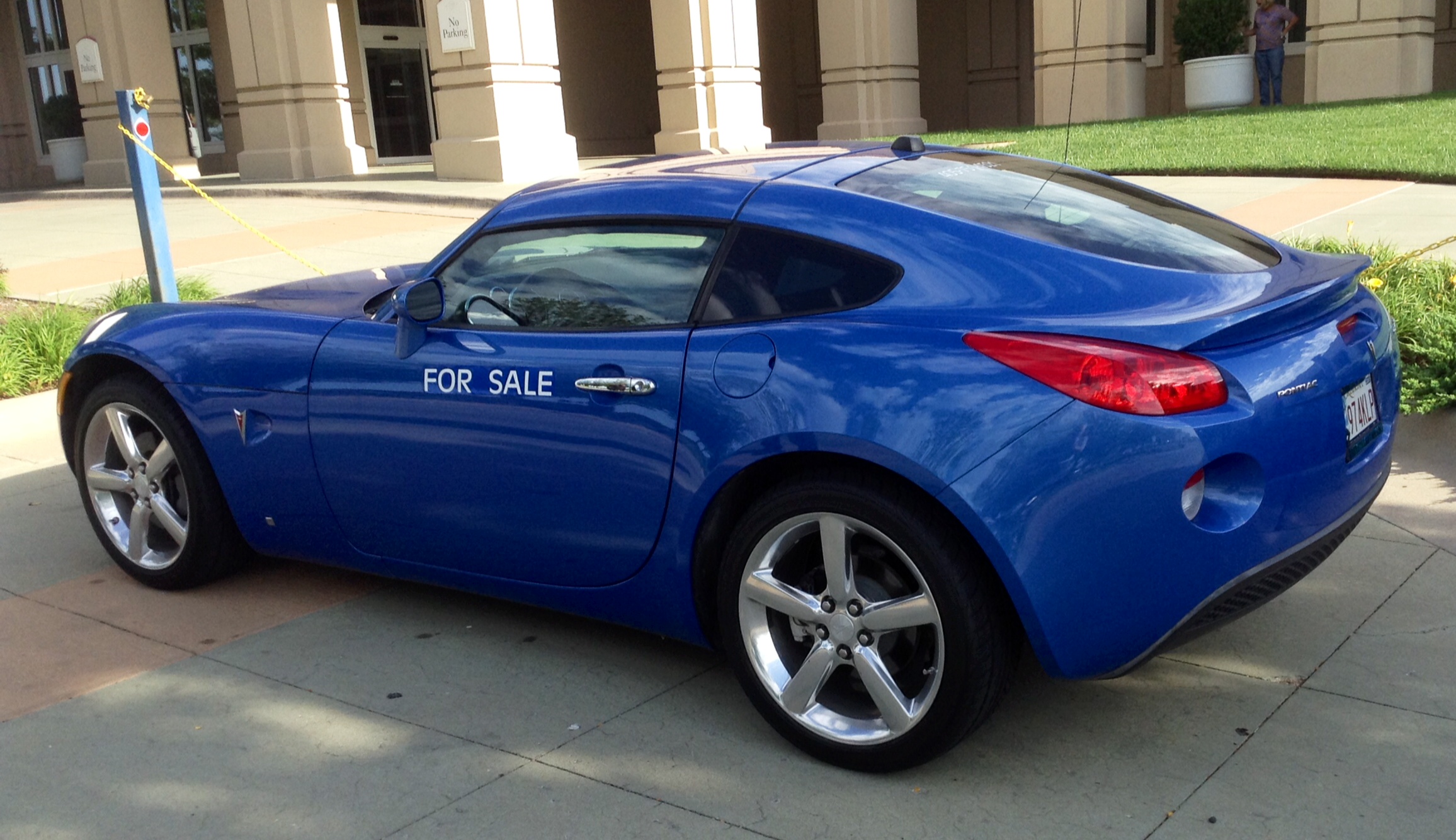 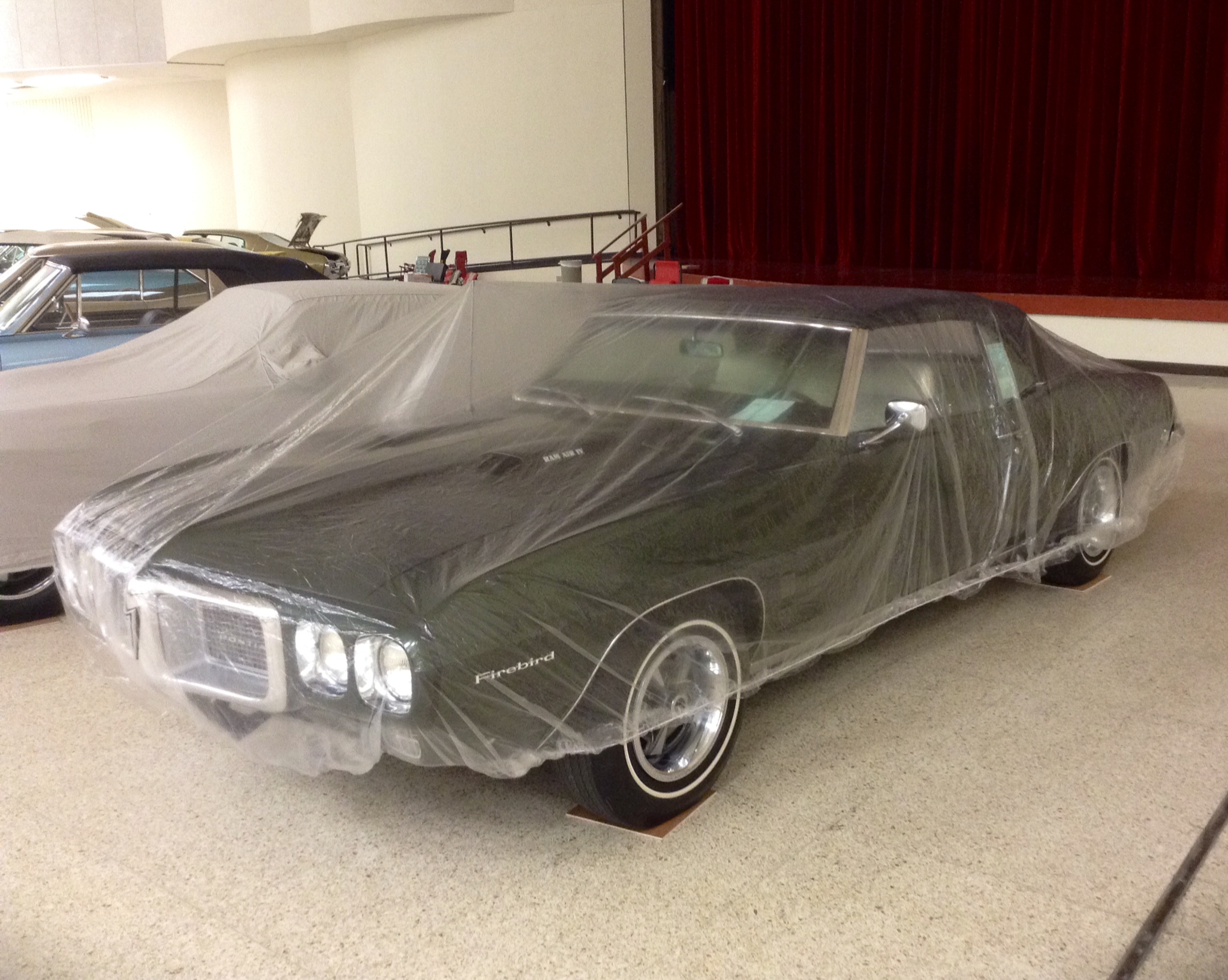 Next week we’ll unvail all the first generation Firebirds that were at the POCI convention, including this ultra-rare ’69 Ram Air IV Convertible that is no stranger to our website.  Stay tuned, you won’t want to miss it!