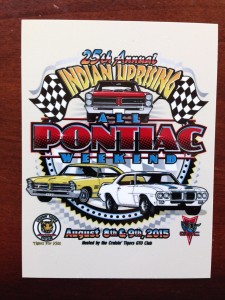 We experienced a fantastic event once again at the Cruisin Tigers’ Indian Uprising All Pontiac Weekend in St. Charles Illinois, this past weekend.  Despite a threat of rain on Sunday, there were still plenty of great Pontiacs and first gen Firebirds to be seen. 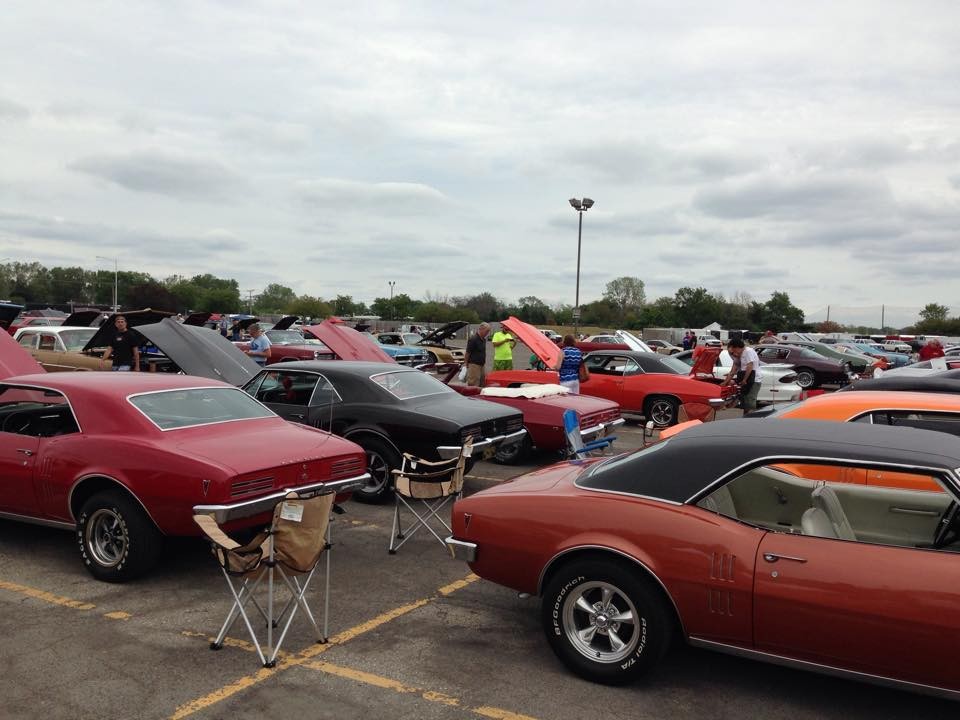 A group shot of some of our Firebirds at the show. 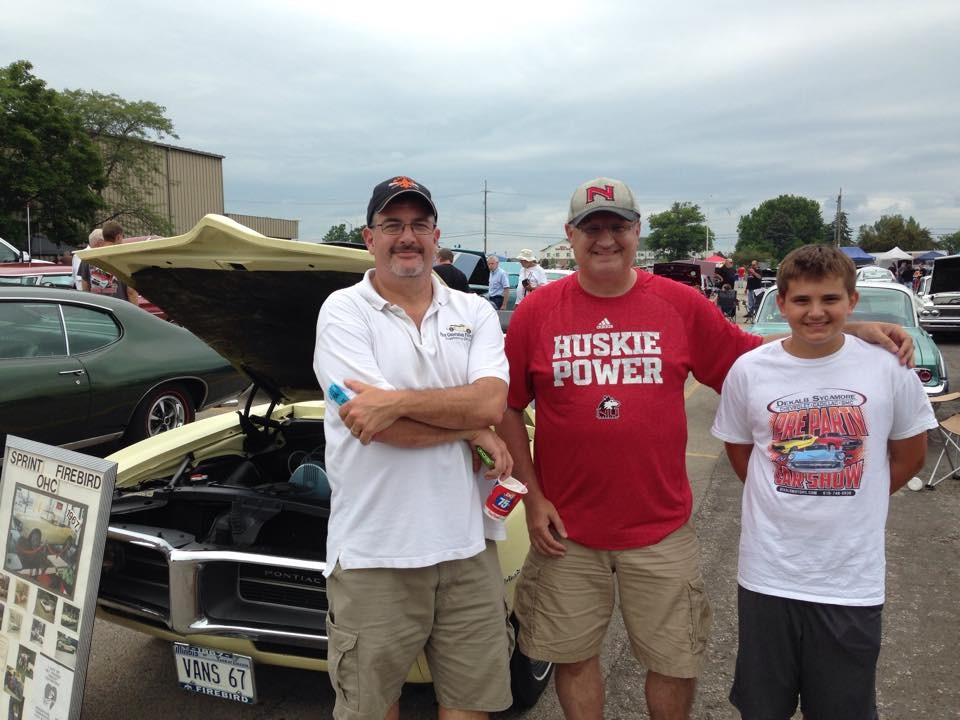 The OHC connection. New member Kyle, and his original ’67 OHC Sprint purchased by his Father standing by member Steve and his son, also owners an Sprint Firebird. 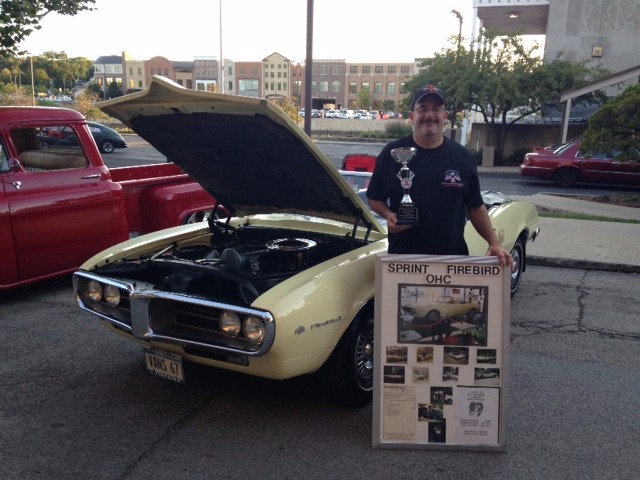 Last year the Firebird was the featured car at this event, and the Midwest Firebirds was the featured club, which kept me very busy.  However, this year was different.  I could relax and enjoy walking around and talking to friends and Pontiac enthusiasts.  I focused on what I love to do; introduce Firebird owners to the club and relish in Pontiac-detailed conversations.  I even took some time talking to Jim Wangers, trying to pry early Firebird stories about John Delorian out of him – without much success I might add. 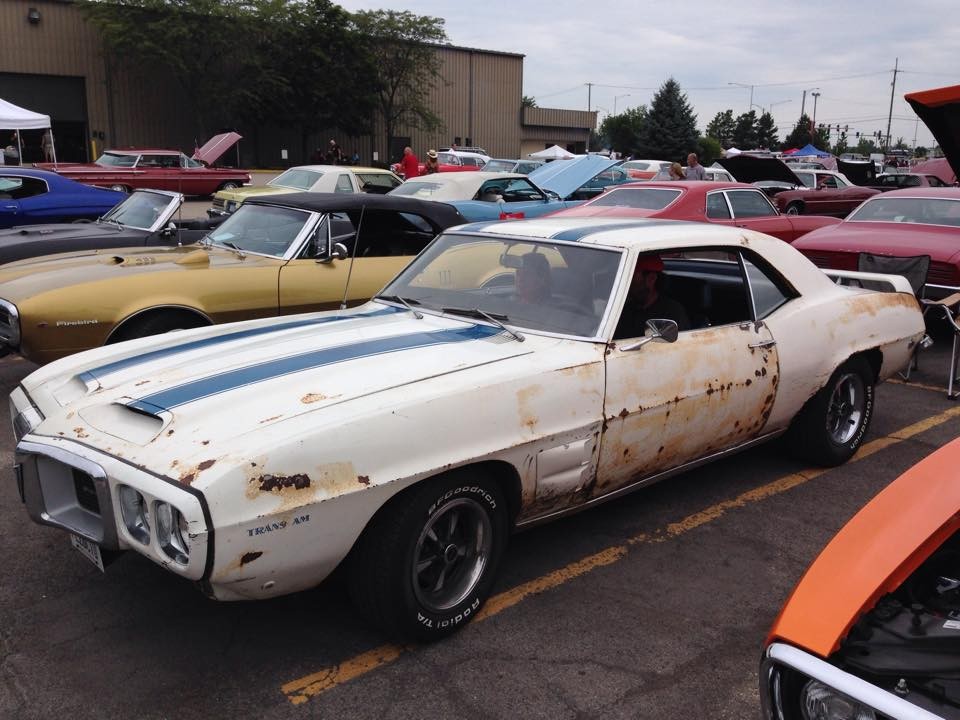 Tim Die picked this Trans Am as the single best car of the entire show. This picture had over 5,000 hits on our Facebook page in less than 24 hours. 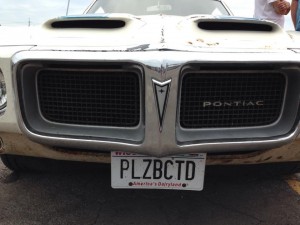 Poking fun at the Judge…

The biggest surprise was when Richard and Dana drove in with their barn-find 1969 Trans Am with 31,000 original miles.  You should have seen the electricity in the crowd as people swarmed the car.  It was as if a rock star just drove up.  I would say rightly so – because in the Firebird world the ’69 TA is a rock star, and this original specimen full of rust and aged patina, tops the charts!  At the end of the show his Trans Am won the Pontiac Oakland Museum Trophy for Best Pontiac of Show.  Click here to read more about Richard’s Trans Am in the story we posted last year.

The new and the old. Our Facebook friend, Jeff Jones sent us this great photo of Ron’s restored TA clone driving by Richard’s original TA. 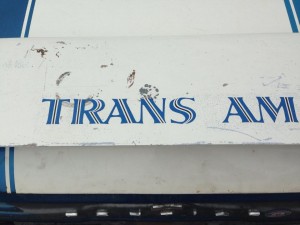 The wing on the back – complete with war wounds and other scratches – it looks like they even had a can sitting on it while it was in storage all those years. 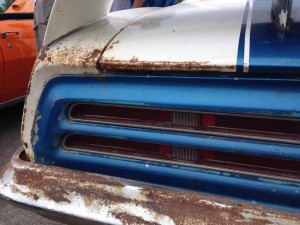 It’s only original once. Would you leave it and enjoy the rust and patina or restore it back to it’s full glory? 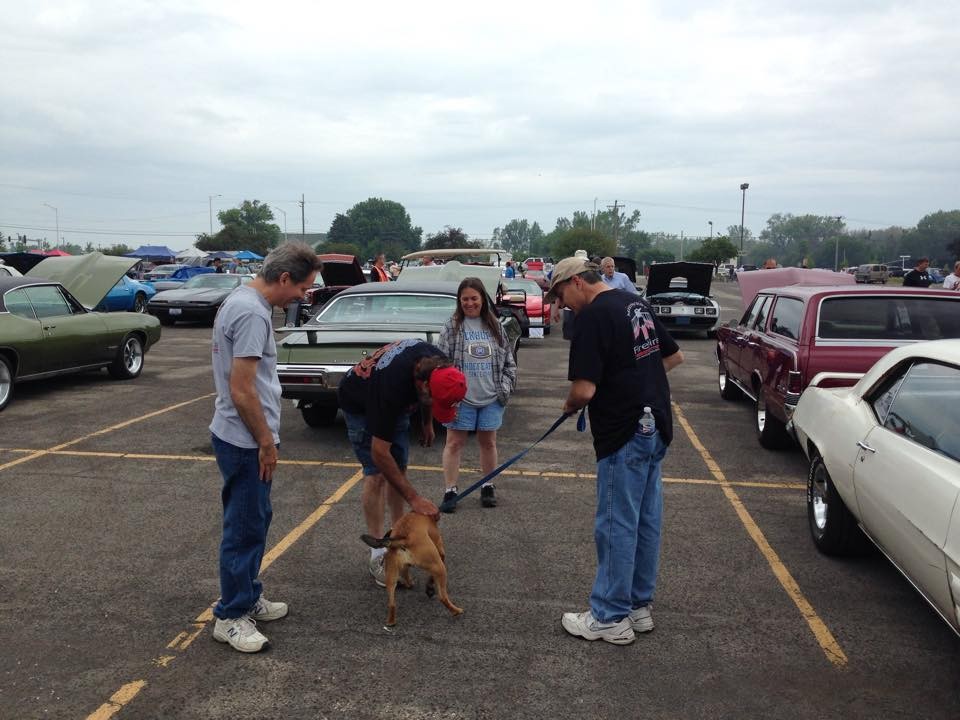 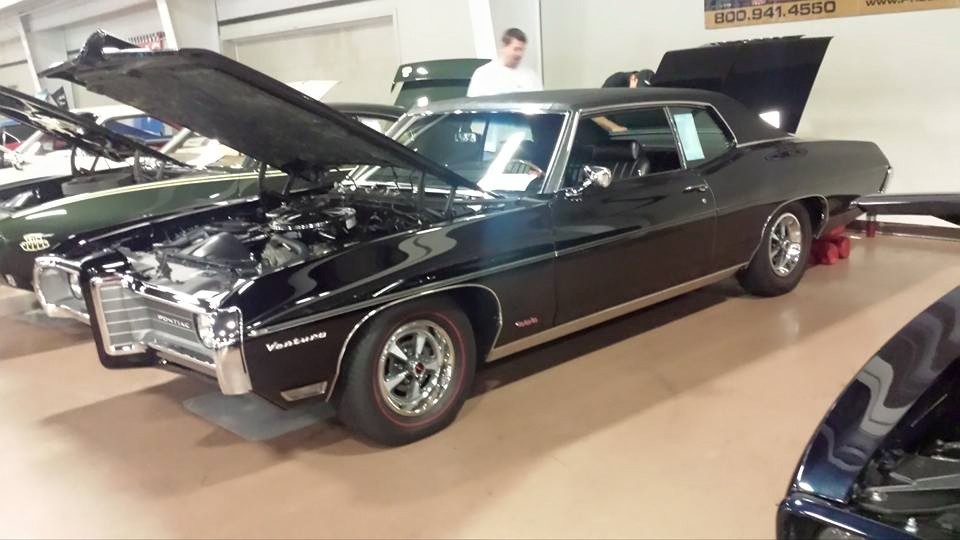 The Full-Size Pontiacs were the featured car of the show, and there were plenty of pristine examples of Bonnevilles , Catalinas, Grand Prix’, Star Chiefs and more. Member Dave Armstrong’s 1969 Catalina. Dave is one of our Technical Directors and is a Pontiac factory-trained master mechanic, a big part of how our club can help Firebird owners with tricky questions. 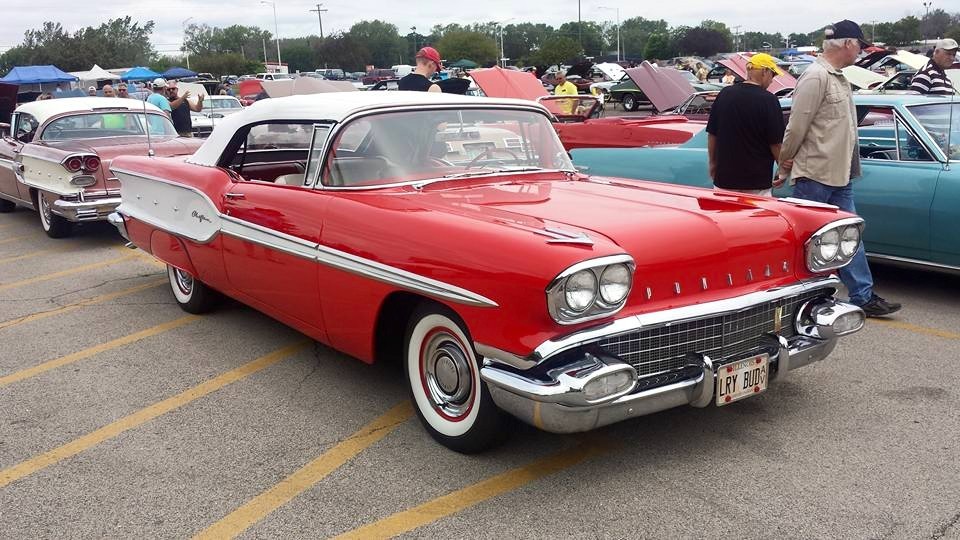 Who needs a ’57 Chevy when you’ve got a Star Chief? 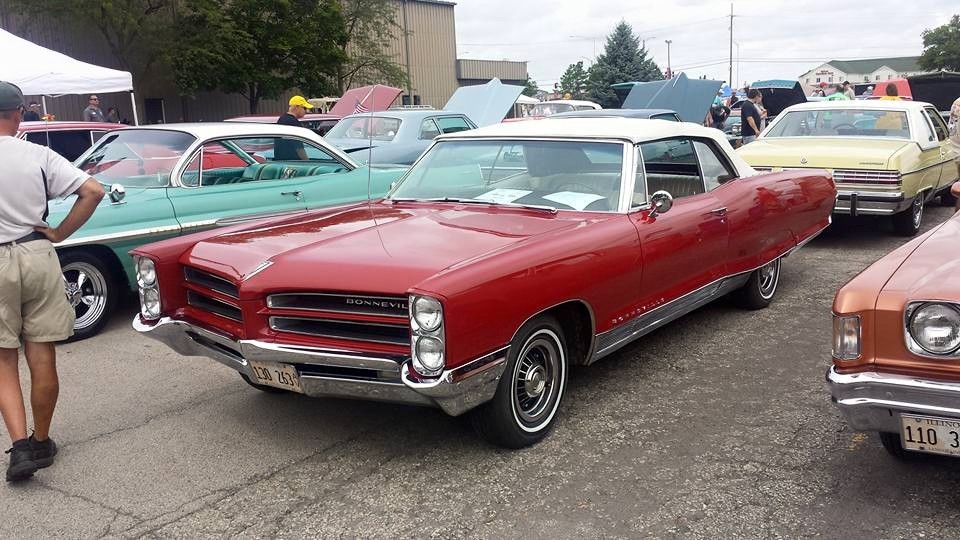 The big Pontiacs were out in full force, like this convertible Bonneville.

I was also very pleased that we signed up six new members from Illinois and Wisconsin for our club.  We have grown now to about 70 members, which I think is terrific for a new club not even two years old, and a testament to the need for a car club dedicated to the first generation Firebird. 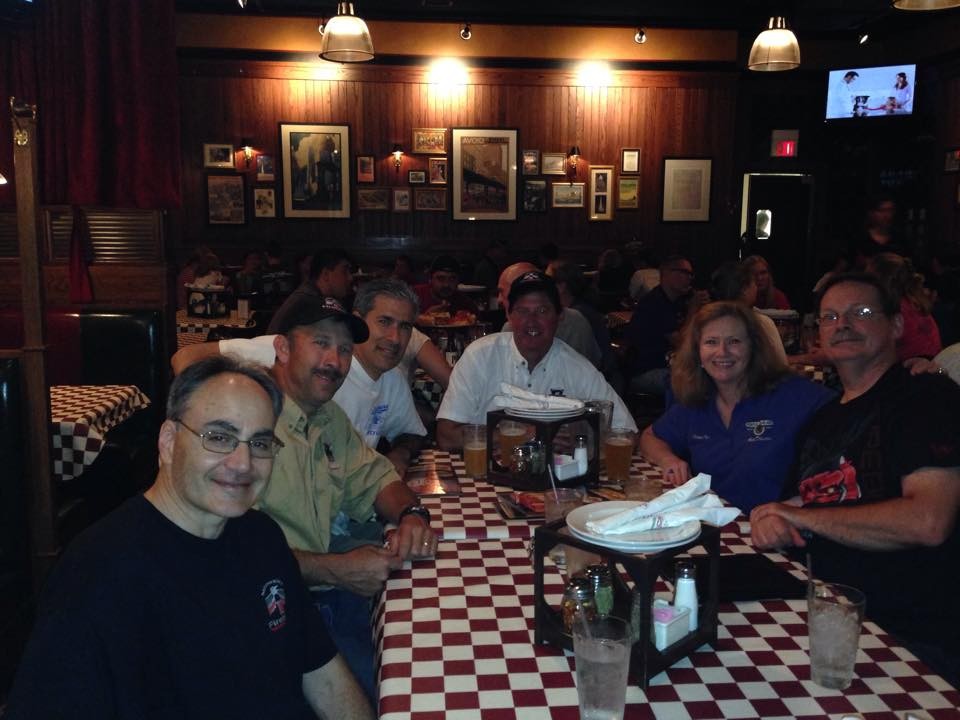 A club tradition, going out for Chicago-Style pizza at Giordano’s! Here we are with Mark Evans from Michigan and Tim and Penny Dye from the Pontiac Museum. 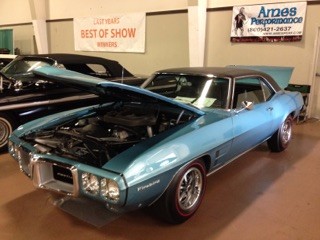 Member Mike G’s Ram Air III Firebird was one of the 5 Best of Show winners from last year. 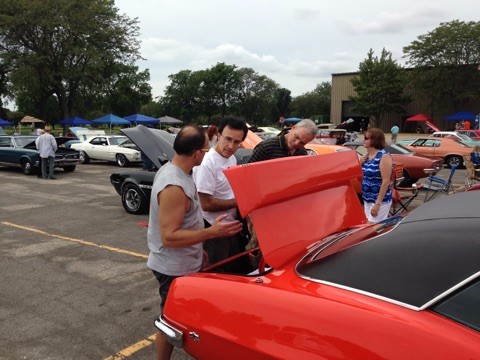 This is what our club is all about. Technical director, Mike Noun discussing restoration and originality details with member Steve on his ’69 Carousel Red Firebird. 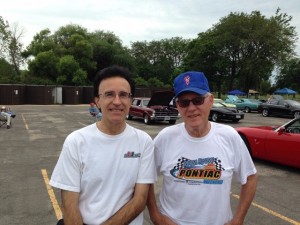 I am thankful that our club is so rich in Pontiac knowledge.  Noted Pontiac Historian and Technical Director, Mike Noun with Pontiac author Larry Delay.  Both are members, and happy to pass on their knowedge to others in the club. 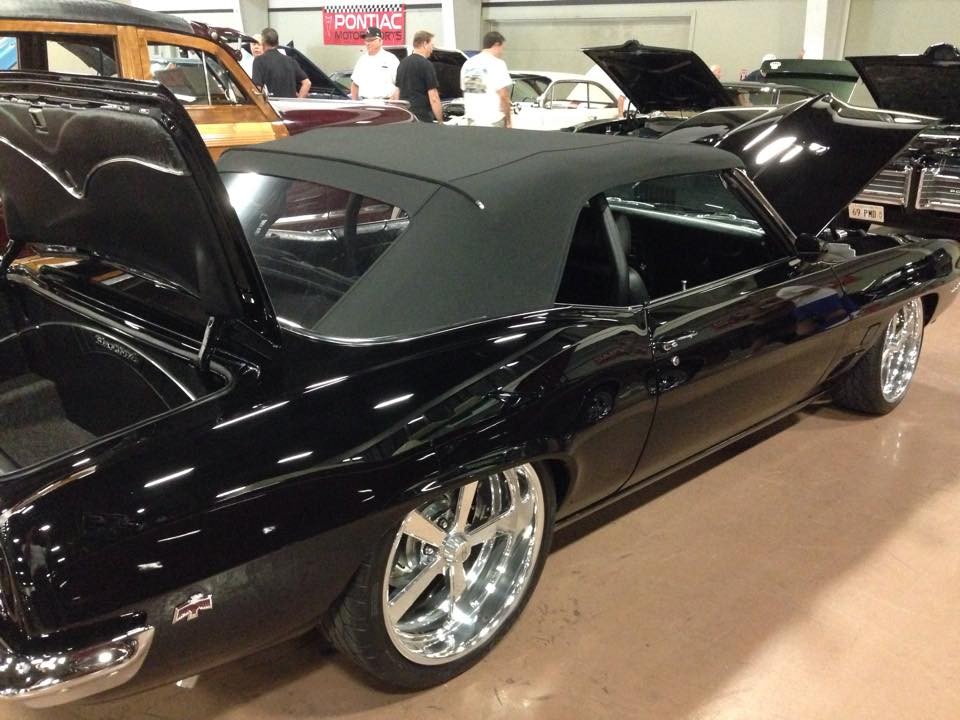 Now this is a Show Bird, complete with an LS engine, air ride suspension, 20 inch wheels and an Ostrich leather interior and trunk. Owner, David from Lexington Kentucky was so very nice to discuss his beautiful “Blackbird” creation with me. We will have more on this car in a future story when we look at all the ’69 Firebirds from the show. 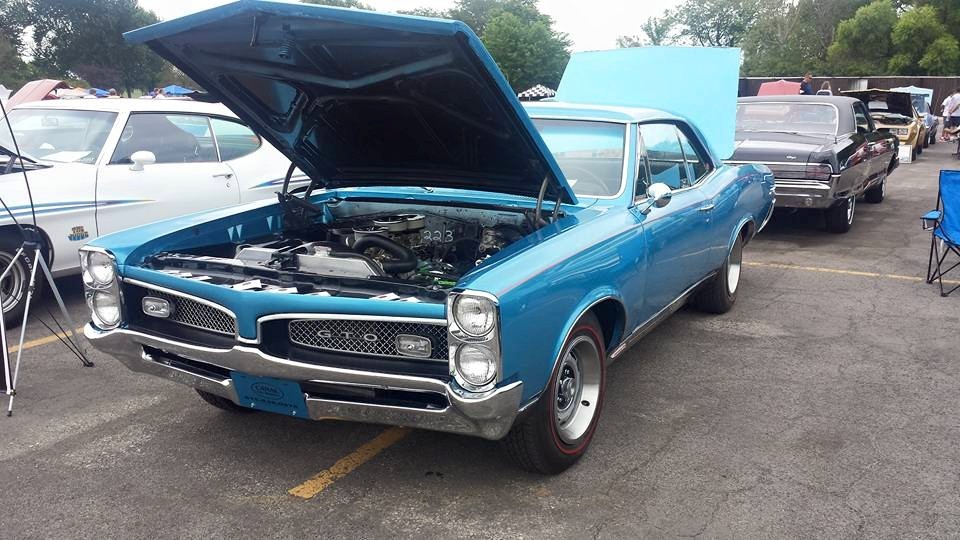 Now here are some of my favorite GTO’s from the show, starting with this Blue 1967. 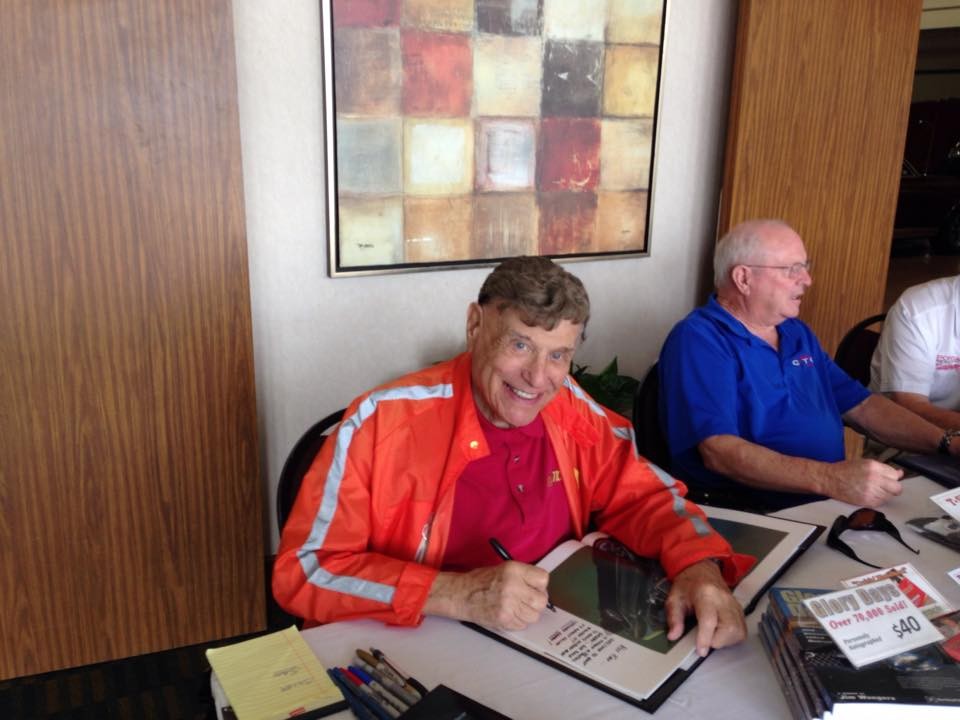 A special thank you to Jim Wangers for taking the time with me on Saturday and also signing his book he wrote with famed Pontiac Artist Art Fitzpatrick. 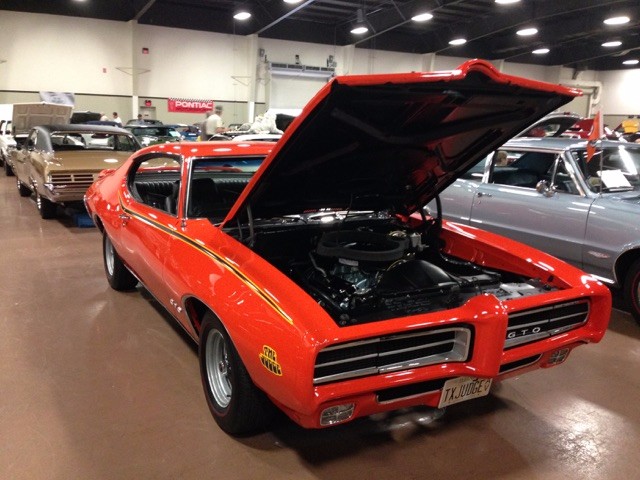 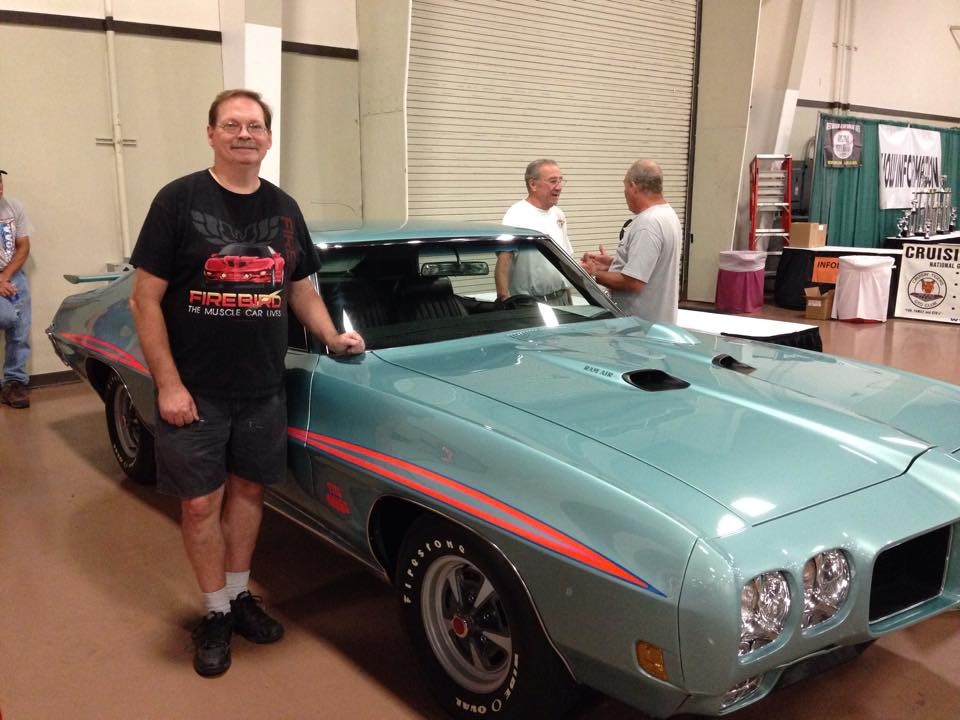 Tim Dye with his freshly restored, 1970 Mint Tourquose Metalic GTO Judge. This is believed to be one of only 6 made like this and you car read more about it and it’s unveiling by clicking here. (Notice he’s wearing a Firebird shirt!) 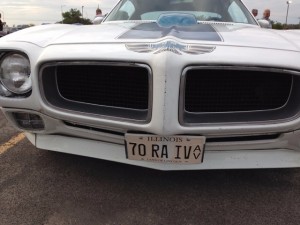 Finally, here are just some of the awesome second generation Firebirds and Trans Ams we spotted. 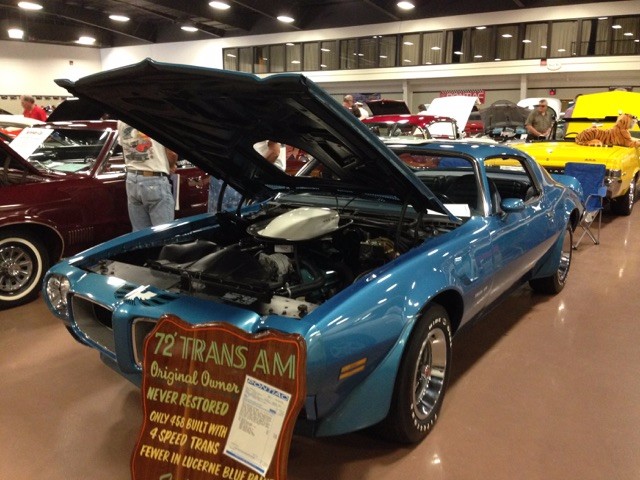 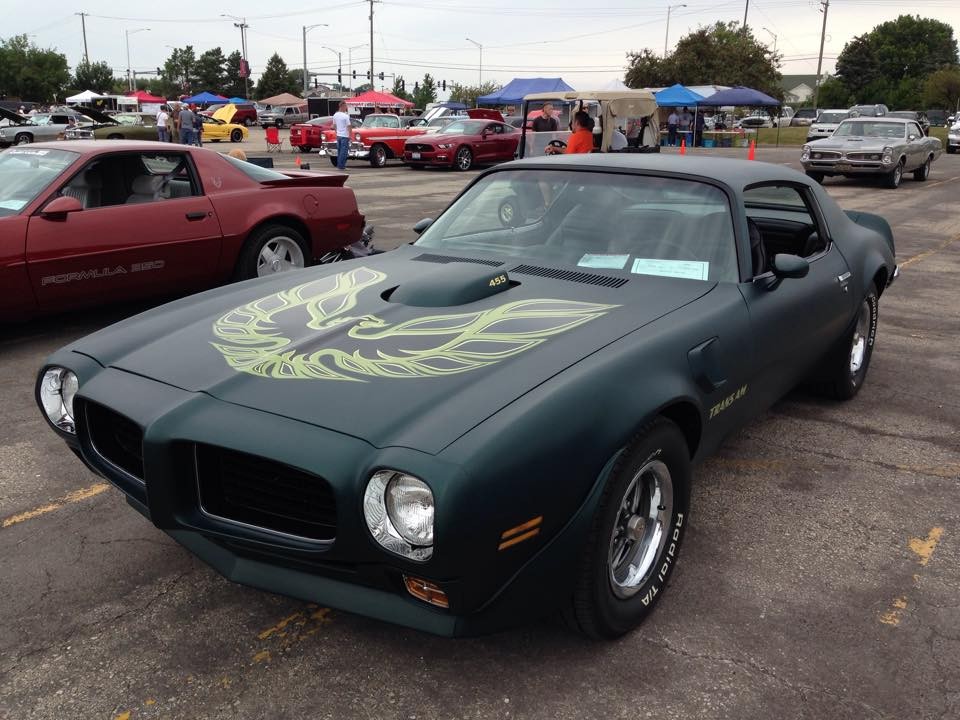 For a flat out cool look, take a rare color (1973 Brewester Green 455 Trans Am) and make it a dull, almost flat-black paint scheem. It was very nice, and also a first place winner.

My friends, Bruce and Regina, enjoying some alone time with their 1974 Admiralty Blue 455 Super Duty Trans Am. 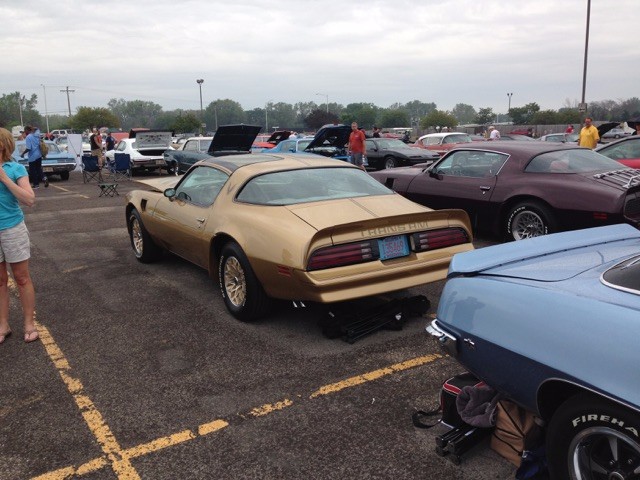 The Firebird brothers from Wisconsin. Gene just joined our club on Sunday with his ’69 Warwick Blue Firebird Coupe. His brother owns the ’78 Gold Special Edition TA. 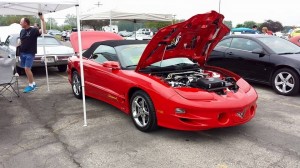 We will wrap-up this post with this red-hot Firehawk convertible the 4th and final generation of the Pontiac Firebird.

Our next post on the 2015 Indian Uprising will contain pictures and stories of all the ’67 and ’68 Firebirds, and then we’ll finish this three-part series with the 1969 Firebirds!  Stay tuned Firebird fans, the best is yet to come.