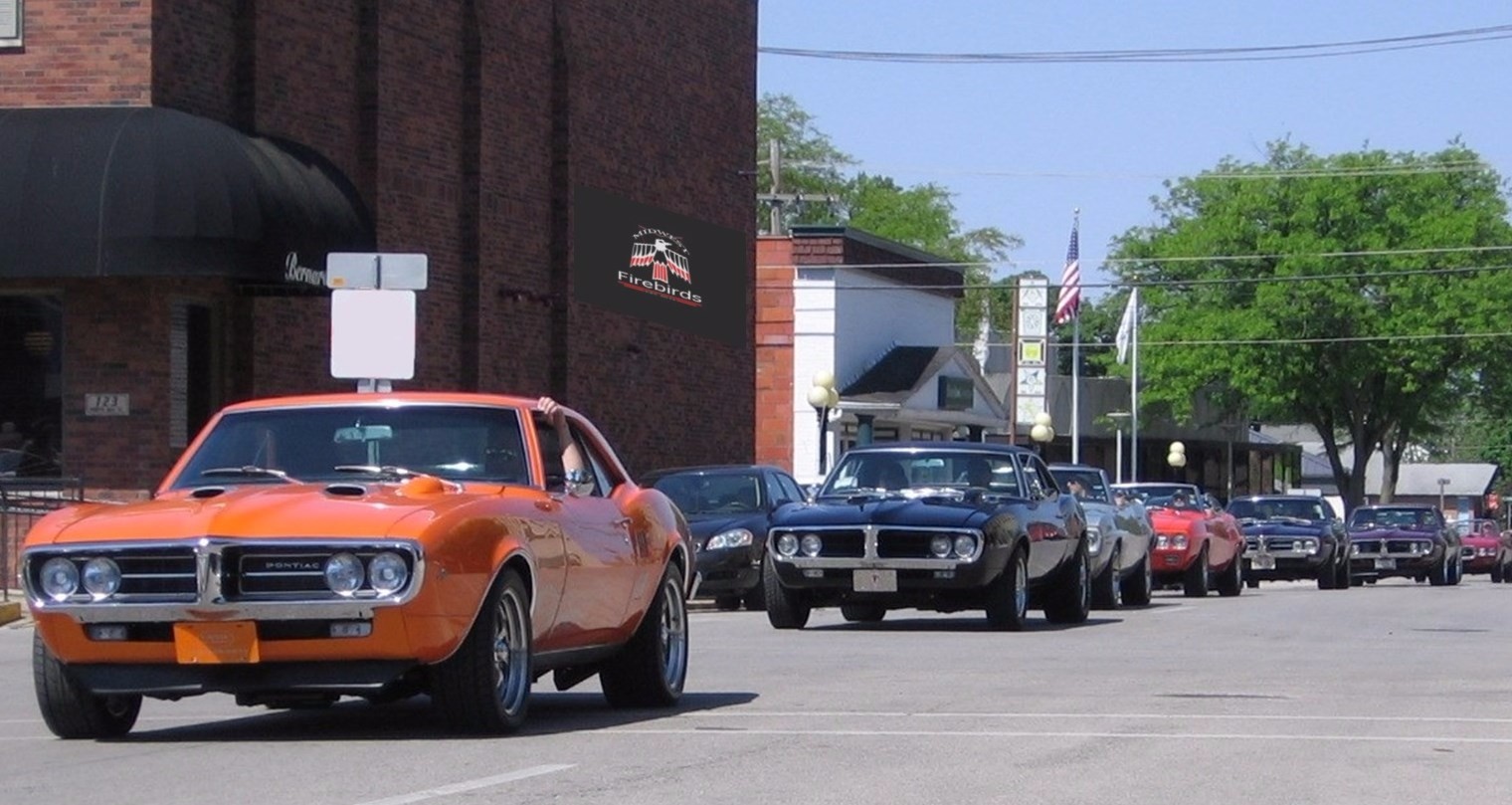 A large gathering of Firebirds recently descended on the small town of Pontiac, IL on May 22nd, 2016.  They landed at the Pontiac-Oakland Museum, and their purpose was to hold one of the largest gathering of Firebirds ever held in the Chicagoland area. The Midwest Firebird Club, in conjunction with the Pontiac-Oakland Museum, hosted the event titled “Firebird Day At The Museum”. Over 70 Firebirds, Formulas, and Trans Ams attended, and the small town atmosphere, coupled with sunny 71 degree weather, made for a perfect weekend for Firebird fans. 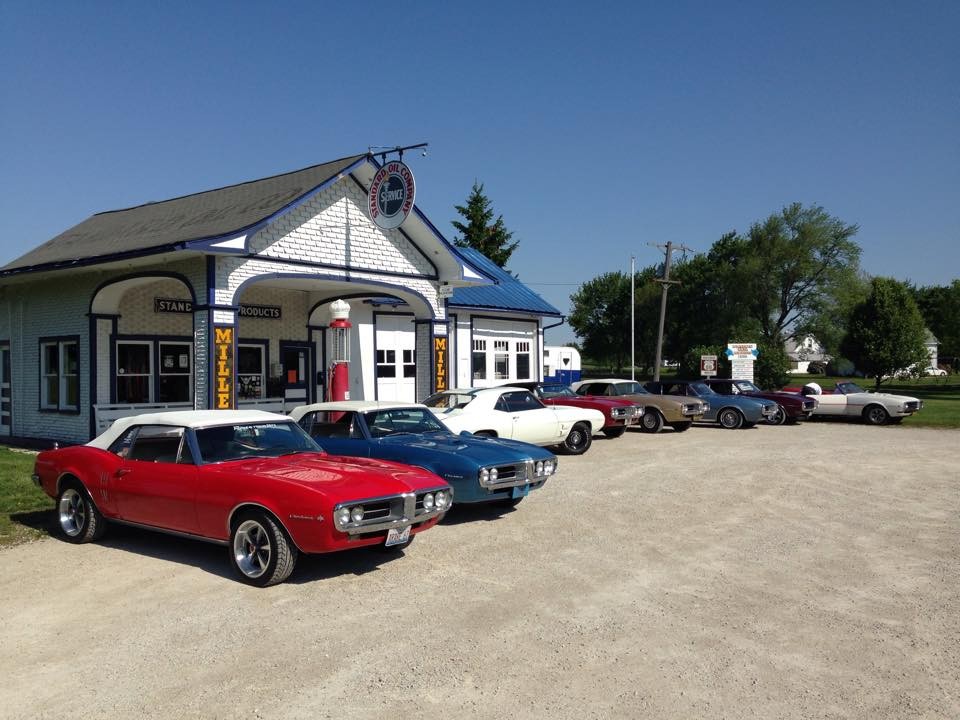 A group of eight first gens at the historic Standard Oil station in Odell, Illinois on Route 66. 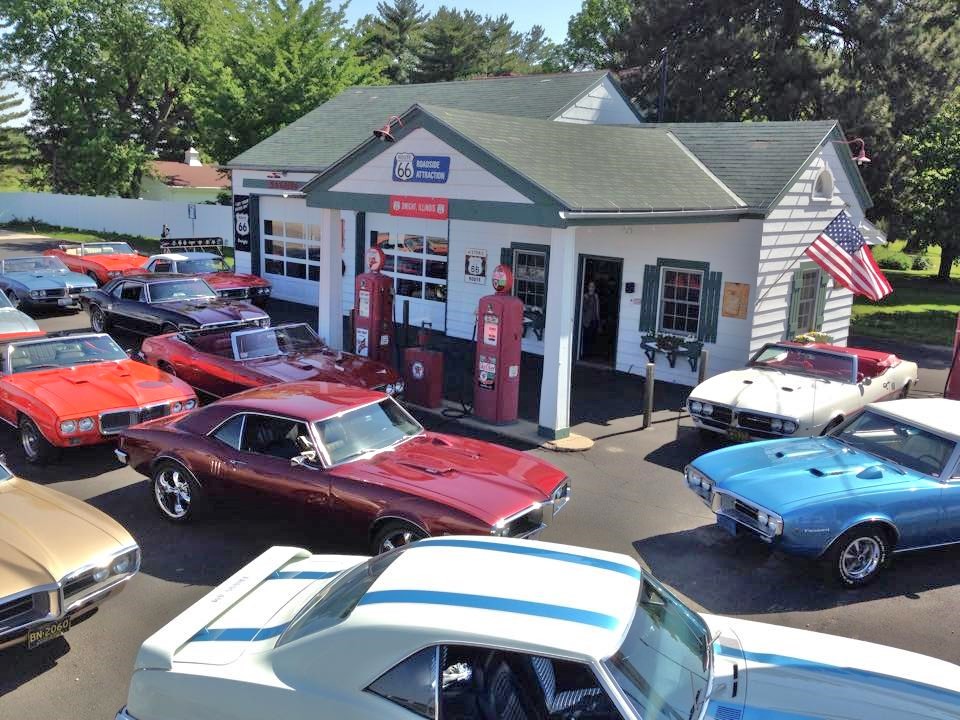 Three different groups of Firebirds gathered together for a great photo shoot at the historic Texaco station in Dwight. Stay tuned, we are working on making promotional posters available of this shot.

The largest Firebird show in the country is of course the Trans Am Nationals, held every August in Dayton, OH. This show typically pulls in 350+ Firebirds from around the nation. One of the highlights of this show is the Saturday night cruise where around 200 cars gather in the small town of Tipp City for the evening.  I’ve been attending the Trans Am Nationals for the past 20 years, and one cannot help but notice the diminishing number of 1st Generation (1967-1969) 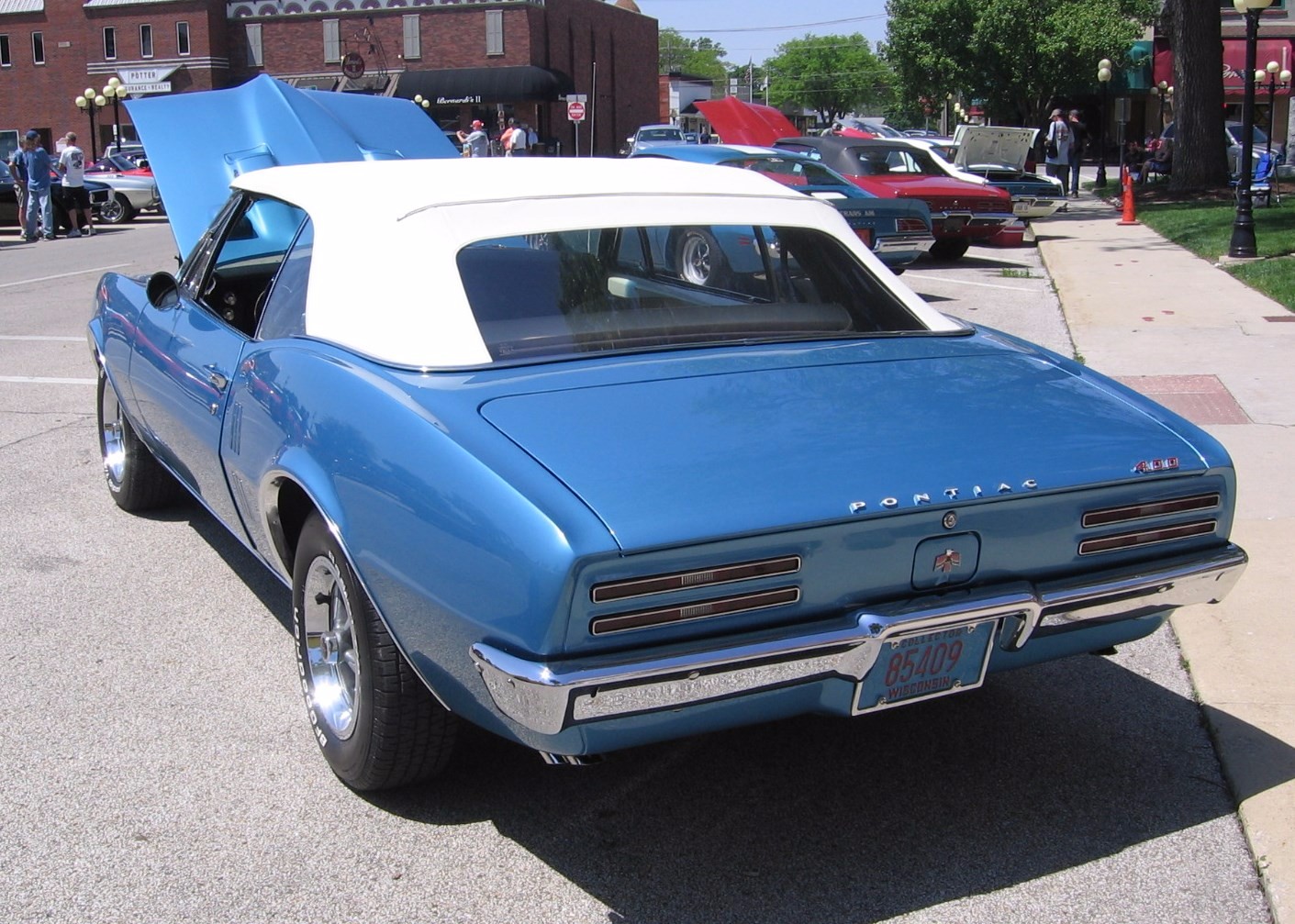 Kevin Nashhold brought this beautiful 1967 Firebird 400 convertible down from Wisconsin. The color is Tyrol Blue, a one-year only color that would eventually see use again as the stripe color on the 1969 Trans Ams. 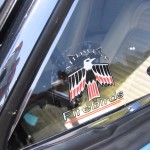 This is where the Midwest Firebird Club differs from other clubs.      Most of its club members actually drive their Firebirds to shows!  Granted, there are Midwest Firebirds members that have national  show winning Firebirds, and of course some of these show winners do  require trailering in order to maintain their pristine condition. But I  can honestly say that the Midwest Firebirds show in Pontiac IL had  more 1967-1969 Firebirds on display than at the Trans Am Nationals!  I’m anticipating the Midwest Firebirds/Pontiac Museum event to  grow larger and larger each year. The laid back atmosphere of the quaint downtown Pontiac area, the hospitality of Tim and Penny Dye from the Pontiac-Oakland Museum, and the friendliness of the participants, is something that is becoming a bit rare in the world today. Midwest Firebirds president Ken Pitcher is the perfect representative for the club, and his hard work and dedication to the group reflects the friendliness and likeability of its club members. 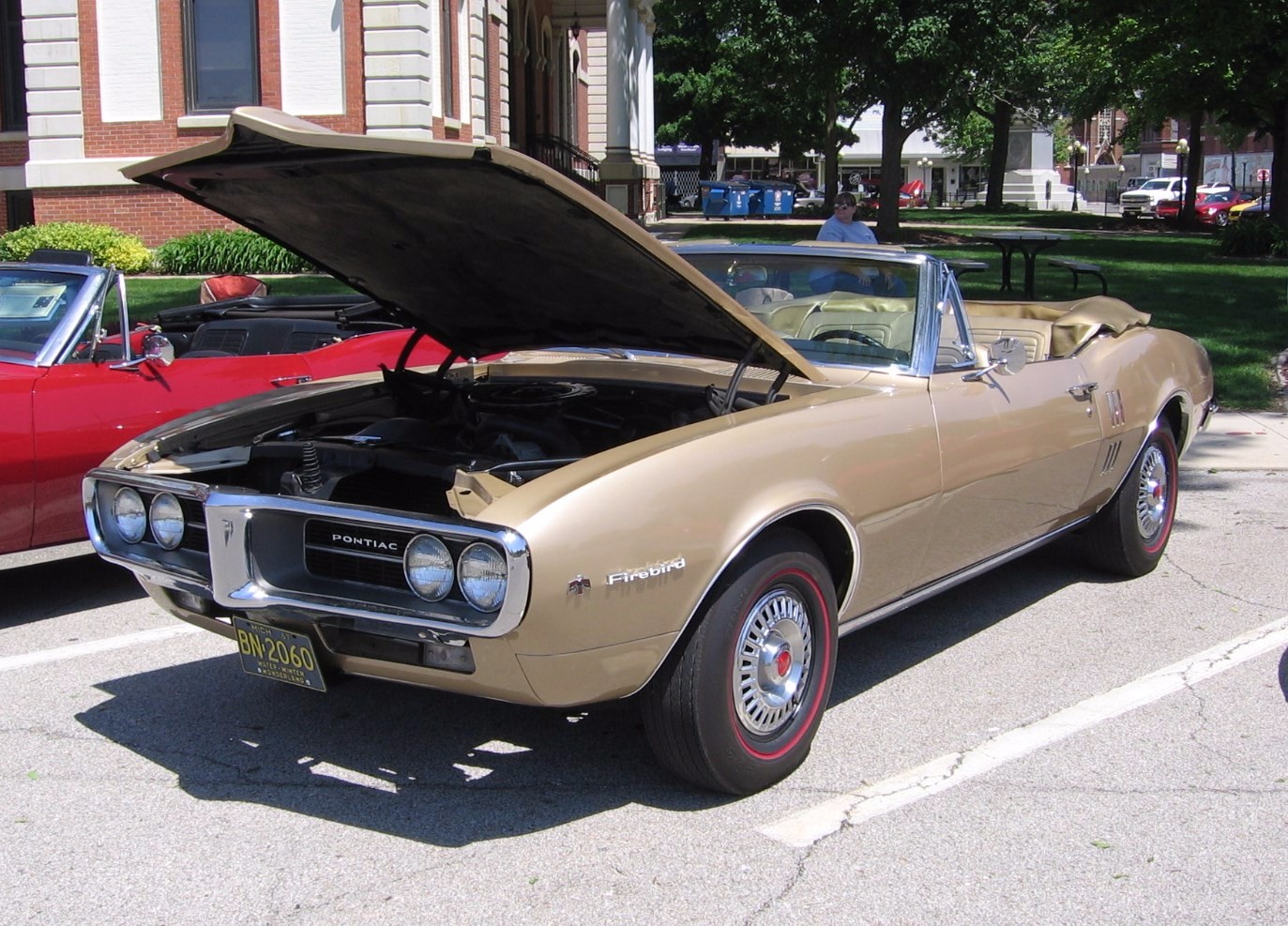 Vern and Diane Bailey drove down from northern Michigan with this rare ’67 Coronado Gold 326 convertible. 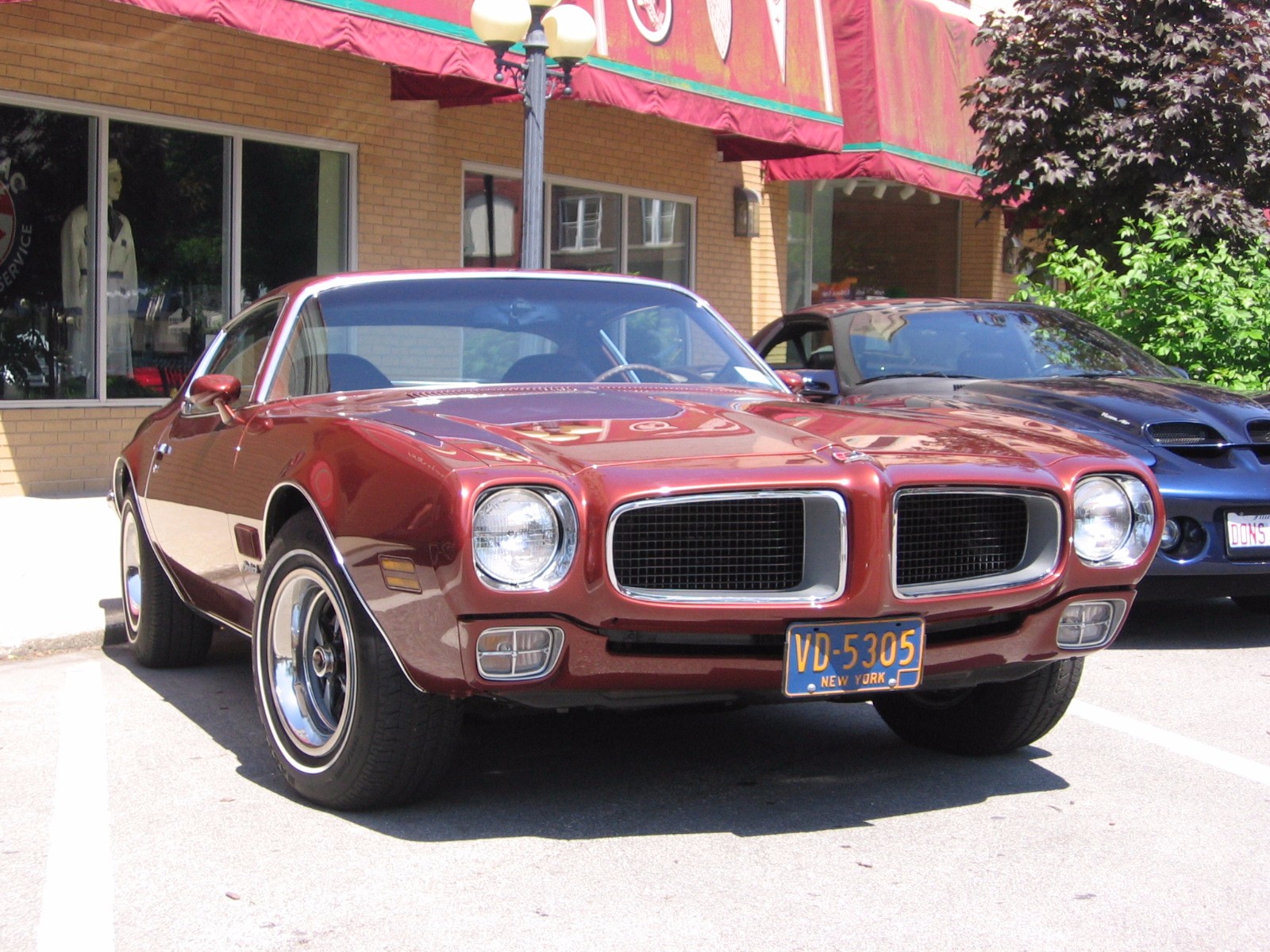 All generations of Firebirds were welcome at the Pontiac-Oakland Automobile Museum! Here’s a very nice example of a 1971 Firebird with only 8,000 original miles.

Back to the show! Two caravans of Firebirds were organized, ensuring those that participated had support from fellow members in the event of any unexpected mechanical breakdown. Not that breakdowns are common, but there’s no way to predict when some mechanical glitch will occur on these 40+ year vehicles, so it’s nice to travel in a group (thankfully, no one had any trouble en route to the show). Members met at a vintage gas station in Odell, and Dwight, IL for a quick photo shoot. The scene was reminiscent of the art prints we see today showing a gathering of muscle cars with some historic backdrop (like a drive-in burger joint or car
dealership), but in this case, artwork wasn’t necessary, the photos were real! 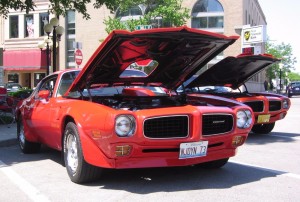 1973 Trans Am 455 in Buccaneer Red wearing honeycomb rims. Many 2nd Generation Firebirds were also in attendance at the show. 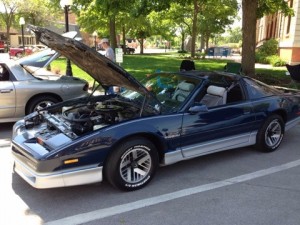 The 3rd Generation Firebirds and Trans Ams were the smallest group represented at the show, and this one is a stunning example. 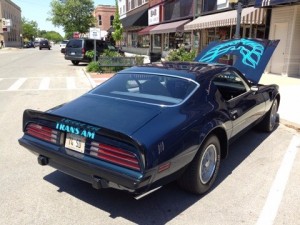 How do you like this beautiful 1974 Super Duty Trans Am in Admiralty Blue? 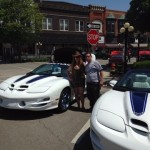 Two very rare 1999 30th year anniversary Trans Ams next to each other.

The Pontiac-Oakland Museum’s gift shop is chock full of cool memorabilia to buy, from modern day t-shirts to original Pontiac dealer artifacts. There was a quick tour of all three floors of the museum conducted by curator Tim Dye, which included viewing some off limits areas (to be open sometime in the future) and a trolley trip to visit another noteworthy car collection in the immediate area, the Alan Finkbinder Collection. 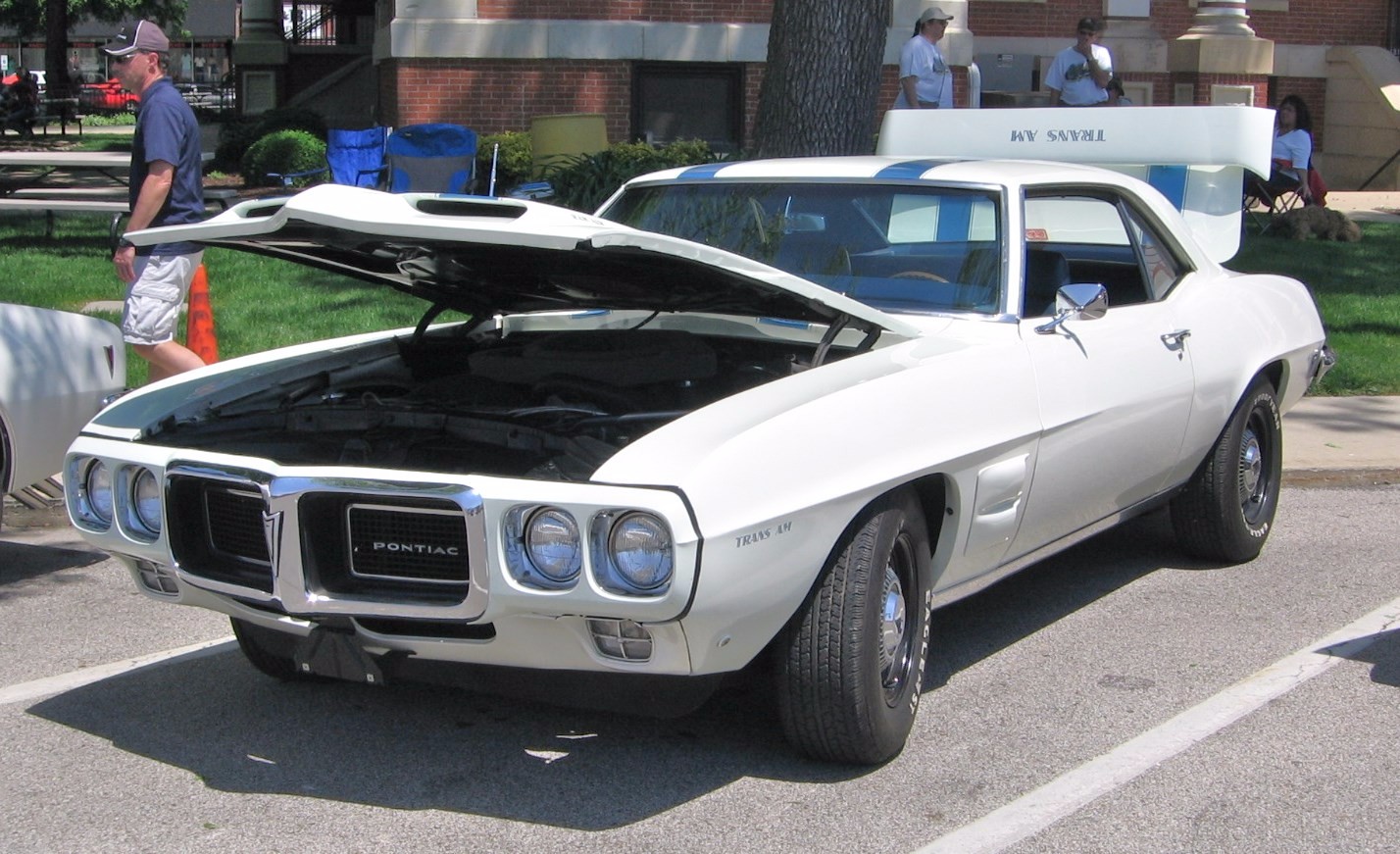 Mike & Margaret Gudenschwager’s beautiful 1969 Trans Am was brought in from Indiana. 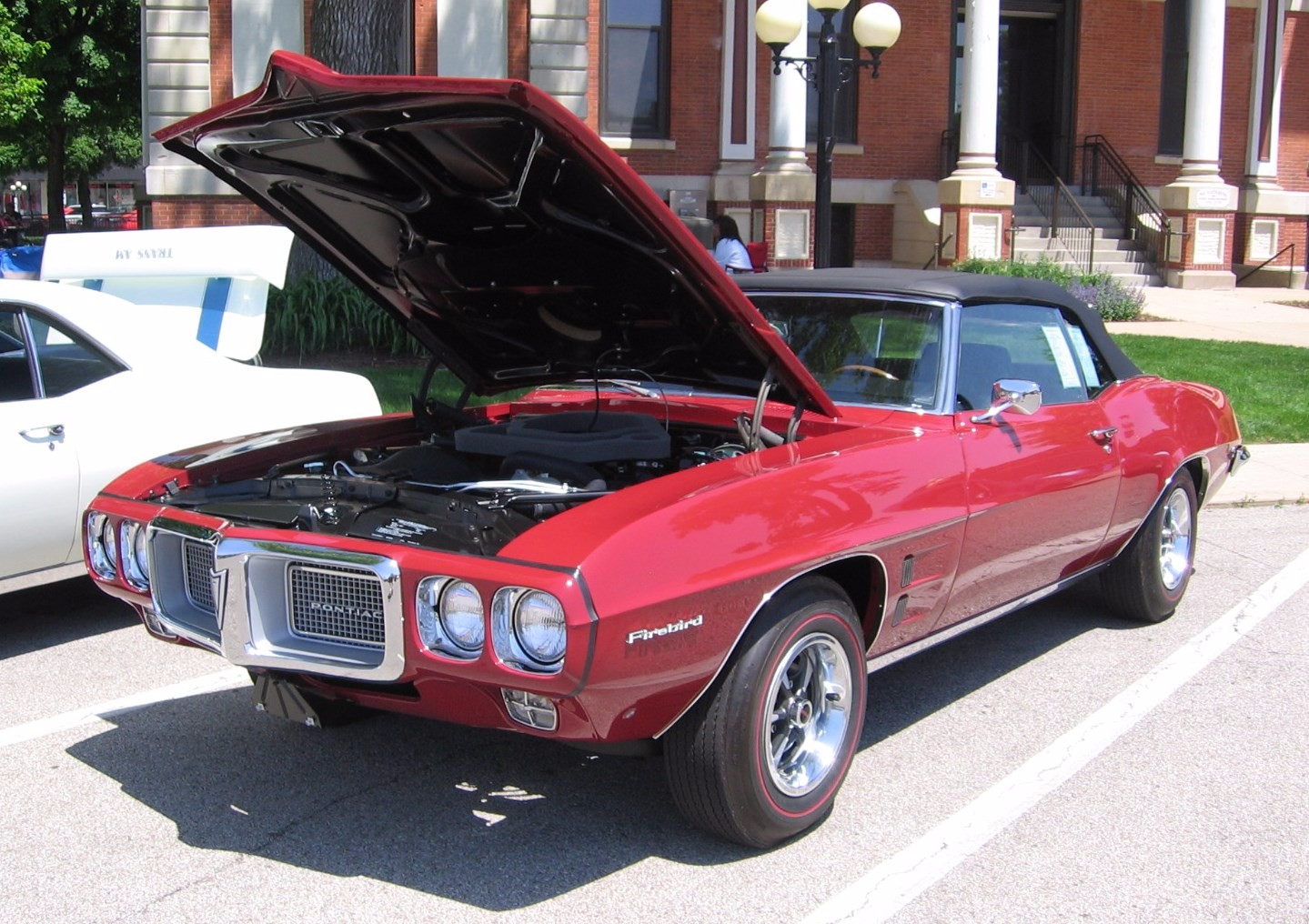 Dave Armstrong’s 1969 Firebird Ram Air III convertible was meticulously restored by Dave himself with only NOS parts. This car is a national show winner, and was originally ordered with 34 factory options! 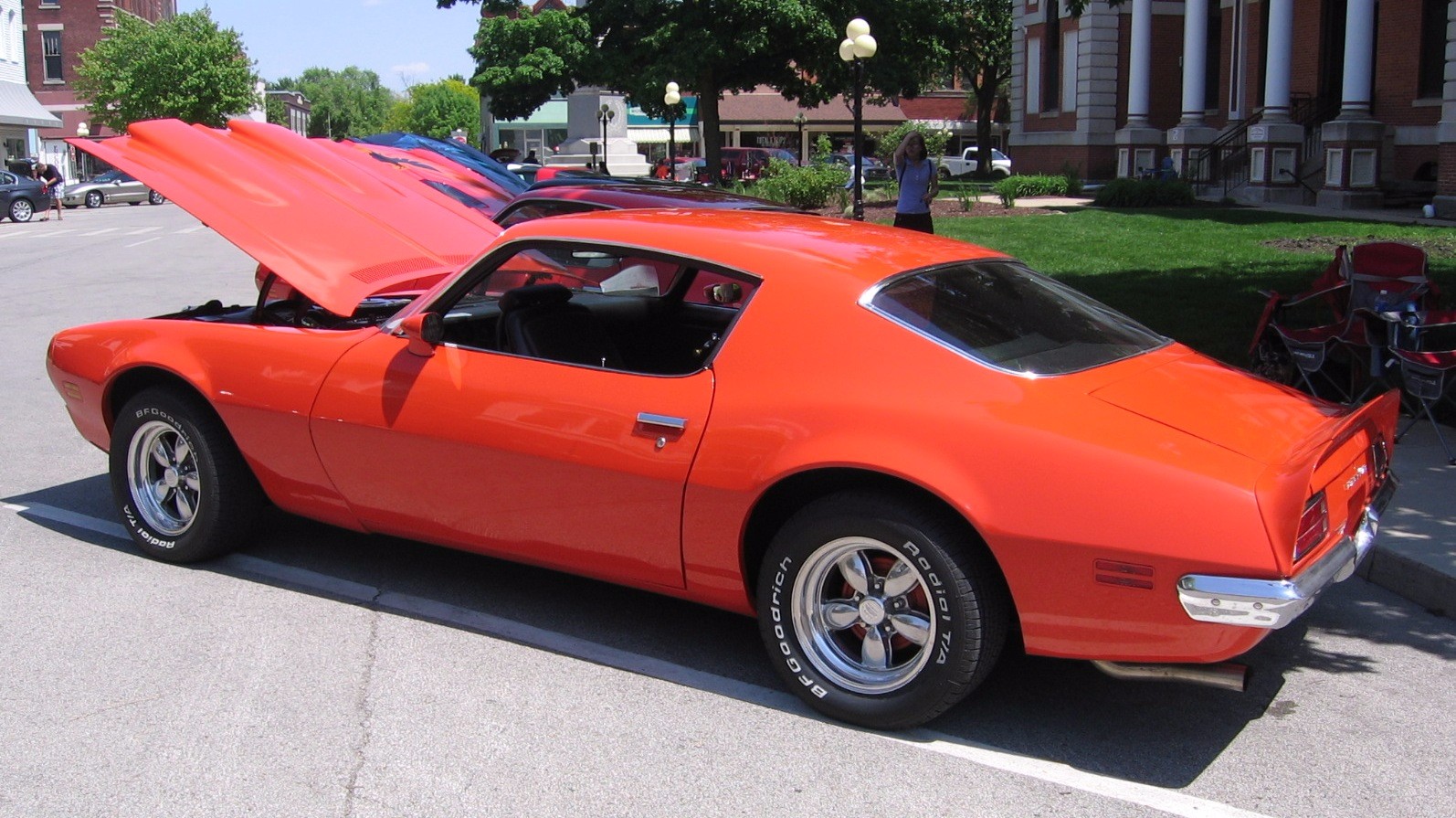 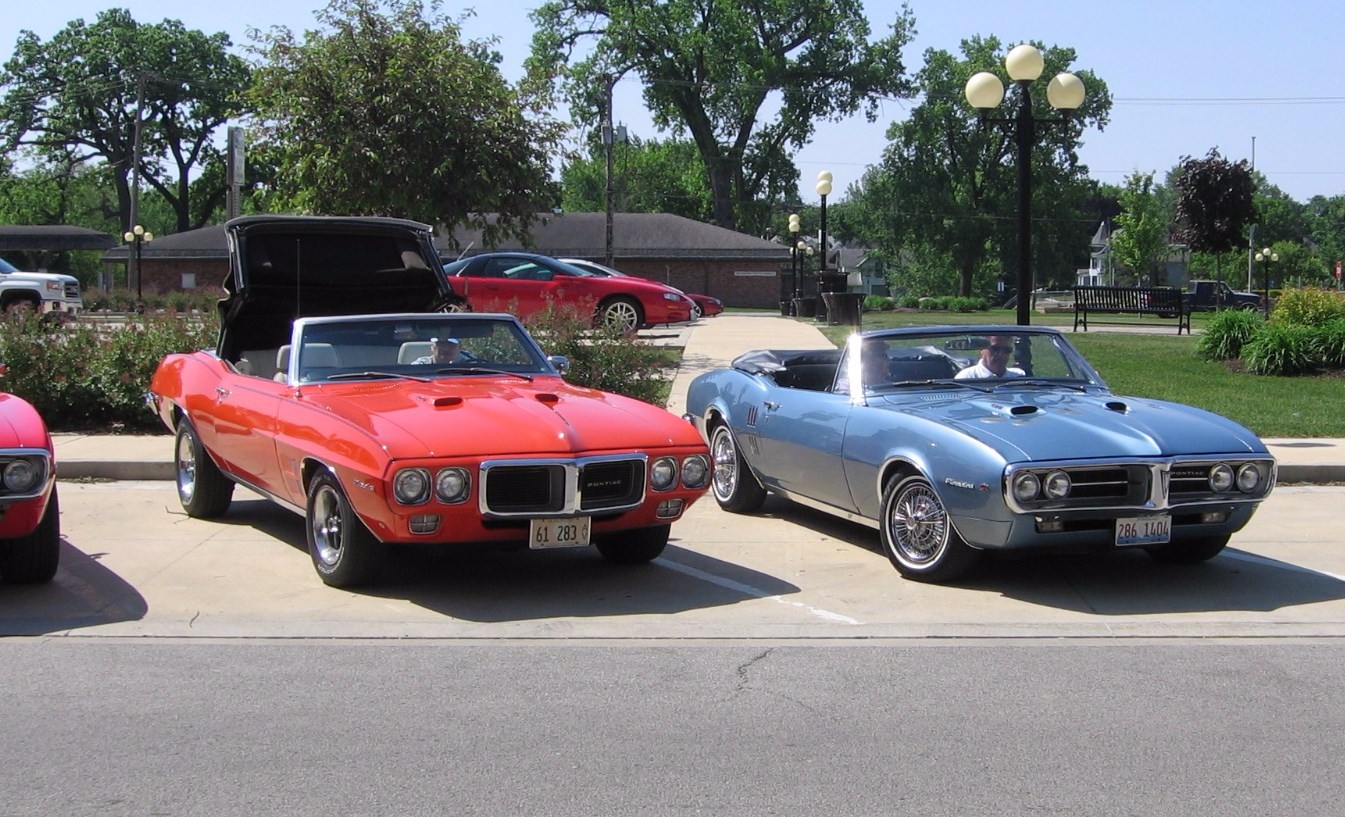 Here’s something that owners of 2nd Generation Firebirds don’t get to enjoy – top down driving! On the left is Mike Kessler’s 1969 Firebird ragtop, on the right is Tom Denton’s 1967 Firebird 400 convertible in Montreux Blue. Tom and his wife, Debbie, came up from the St. Louis area for this show.

For those planning on attending next year (or anytime!) there is also an excellent museum called the Route 66 Museum, along with the Livingston Country War Museum, which is a wonderful place for those interested in 20th century wartime artifacts. These museums, along with the Pontiac-Oakland Museum, are free to the public. 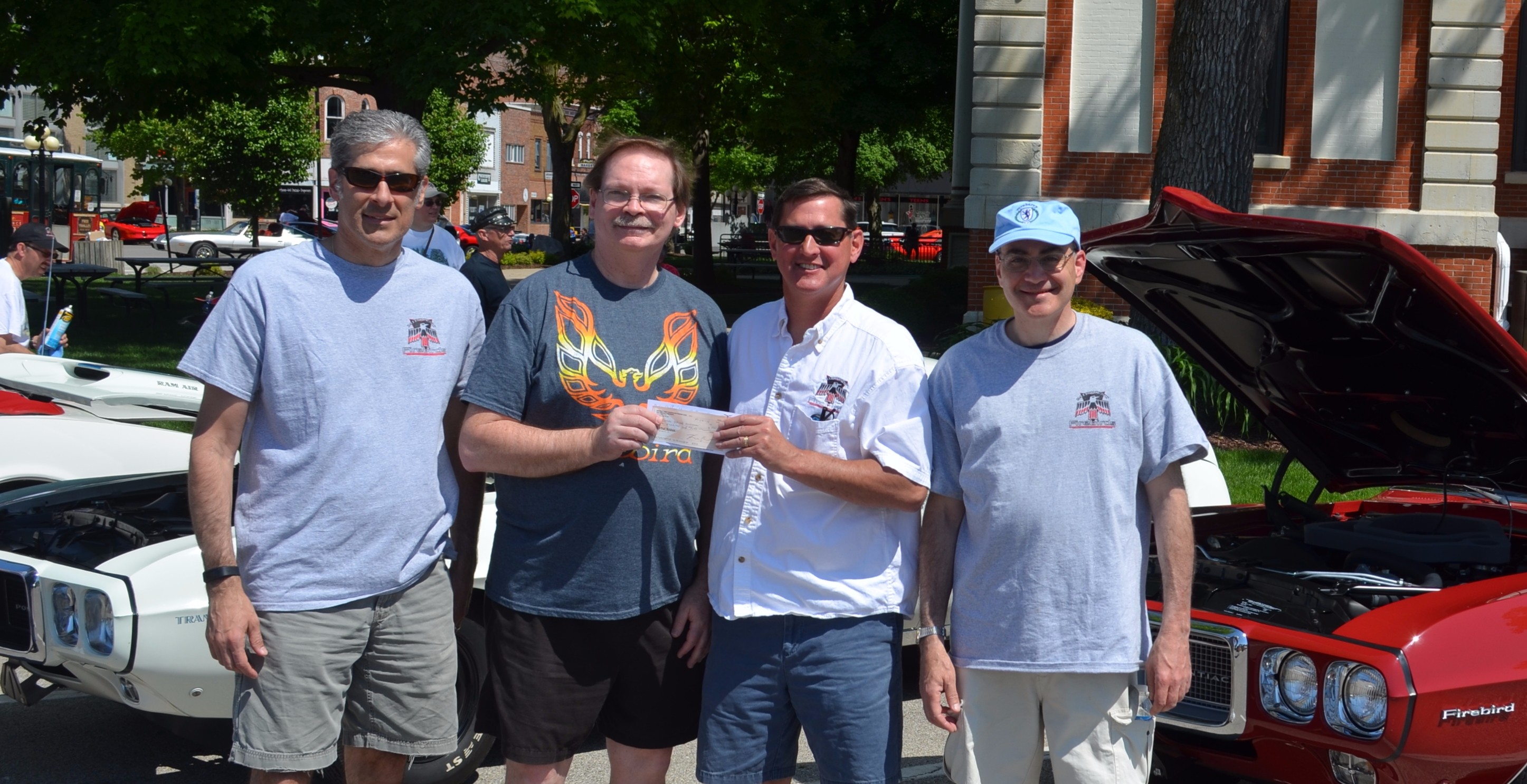 We are quite excited to be able to donate to the Pontiac Oakland Automobile Museum – especially for being such a young club, in only our third year. Club Officers from left to right, Mark Boratto, Ken Pitcher and Mike Kessler. Receiving the check is Tim Dye, Museum Curator in the “Screaming Chicken” shirt.

The club presented a large donation to the Pontiac-Oakland Museum in appreciation for all they do for us Pontiac fans. There was also a raffle with merchandise donated by the event sponsors. Big thanks to Tim and Penny Dye, Dave Sullivan, and club president Ken Pitcher! 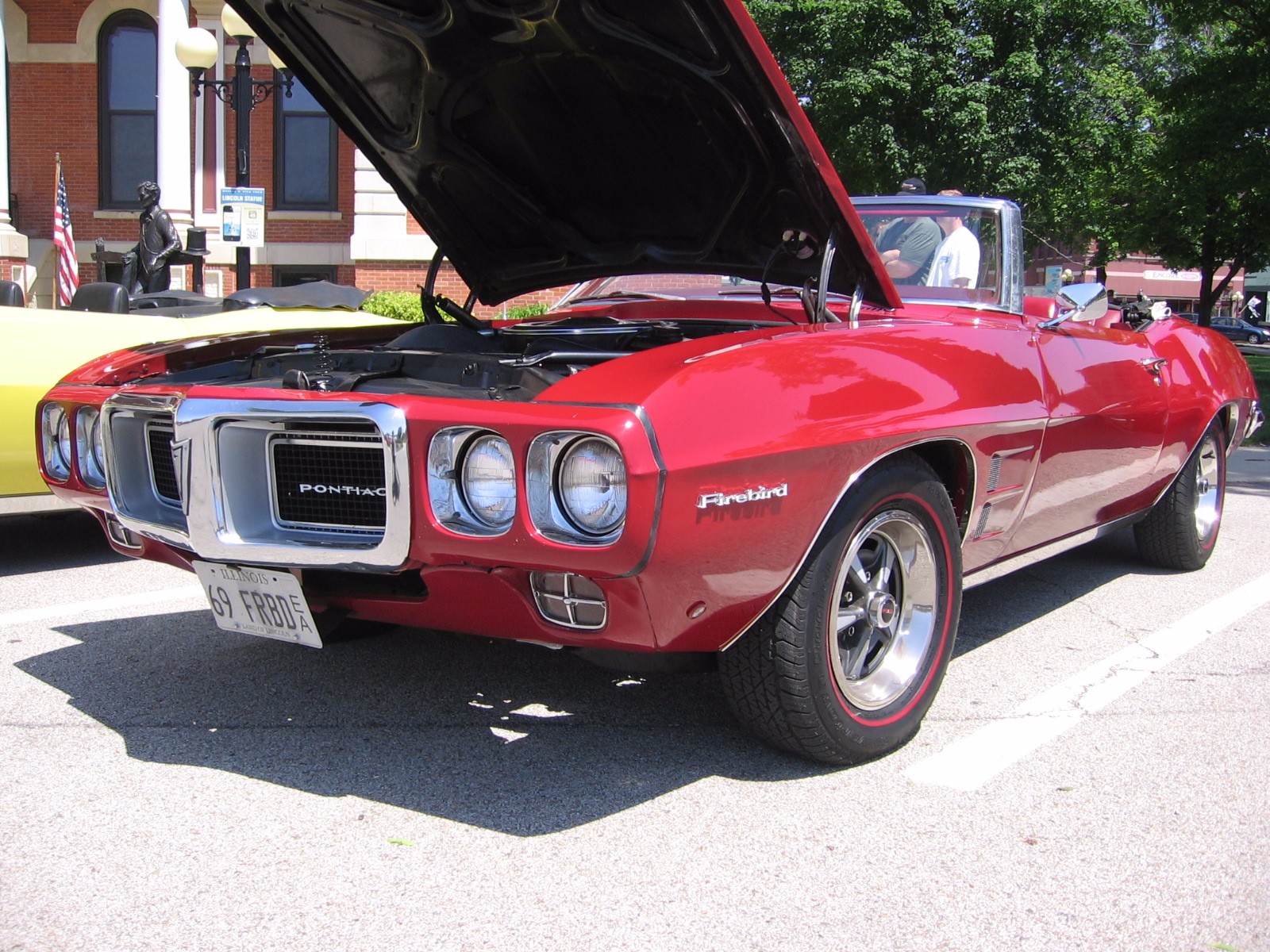 Vince Fornelli’s beautiful 1969 Firebird 400 convertible in Matador Red with a Red interior and White top. This ‘bird just had a complete engine rebuild and new suspension done by one of our show sponsors, Tri-Power Automotive, and performed flawlessly. 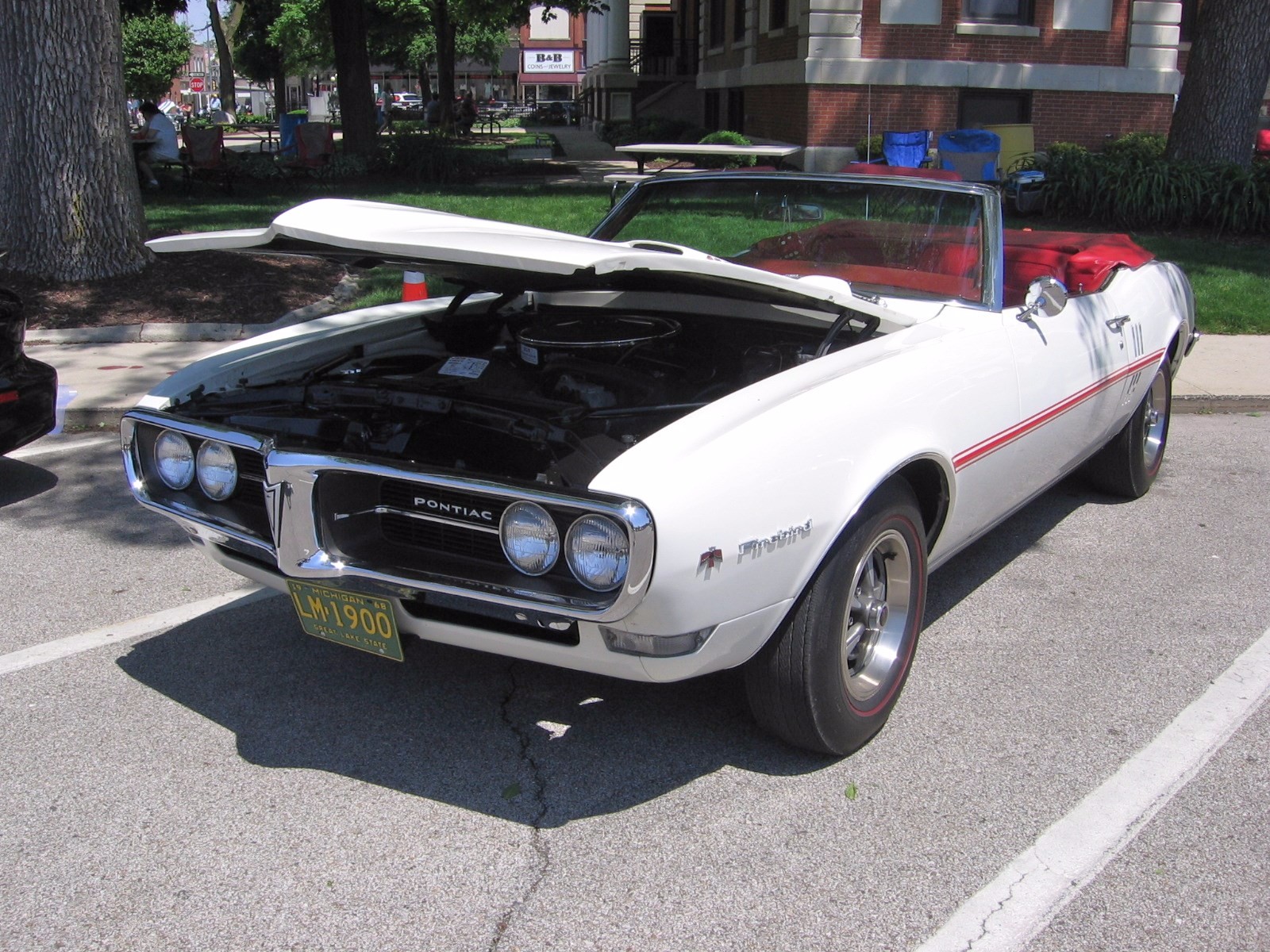 Mark & Linda Evans brought their show winning 1968 Firebird 400 in from Ann Arbor Michigan. The side stripe was a factory option on 1967-1968 Firebirds, which Pontiac called the Rally Stripe (Option Code 494.) 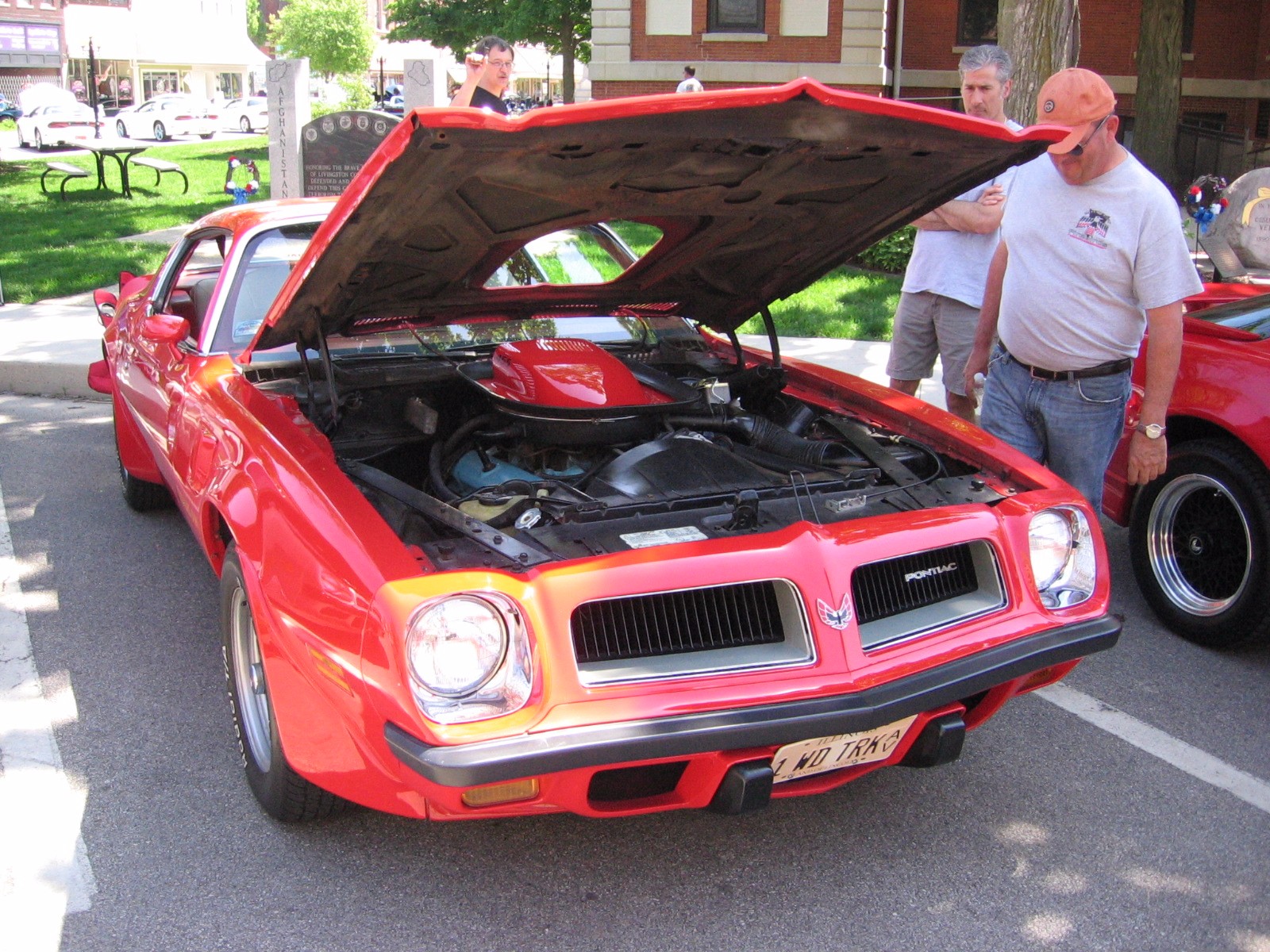 Here’s a nice 1974 Trans Am in Buccaneer Red examined by Midwest Firebird Club members. While First Generation Firebird (1967 – 1969) are the club’s focus, all year Firebirds were welcome and appreciated on Firebird Day at the Museum. 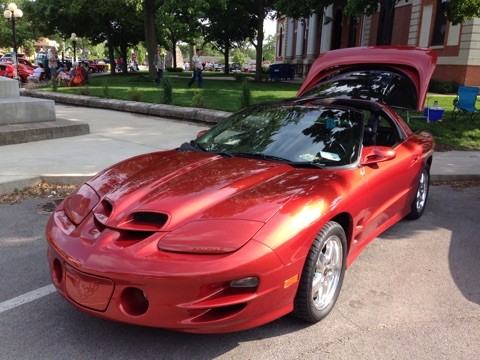 Owner Gary Jennings from southern Illinois, brought this Sunset Orange Metallic 2002 WS6 Trans Am to the party. It is an ultra-rare color, with only 303 produced, and it has 23,000 original miles. 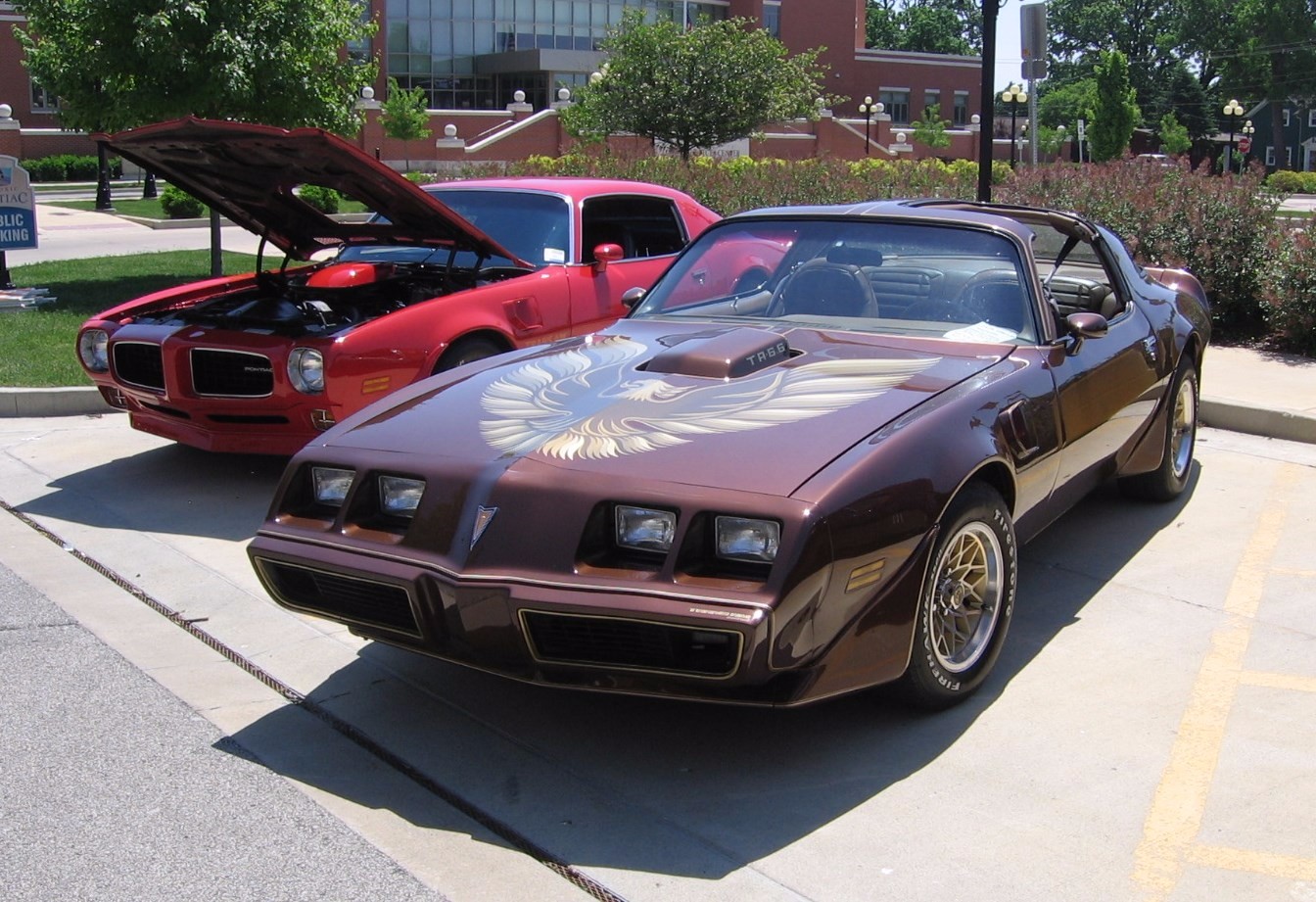 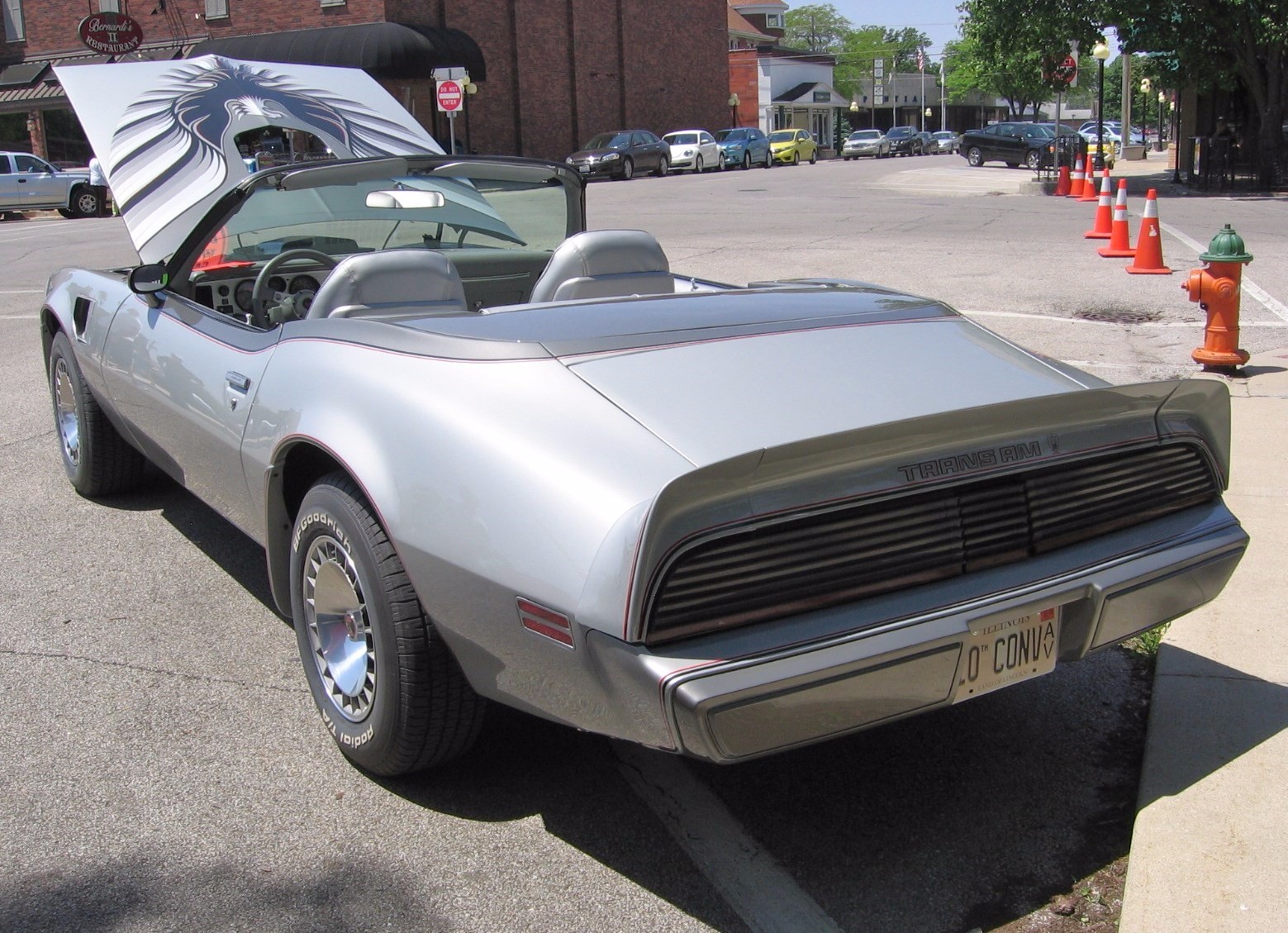