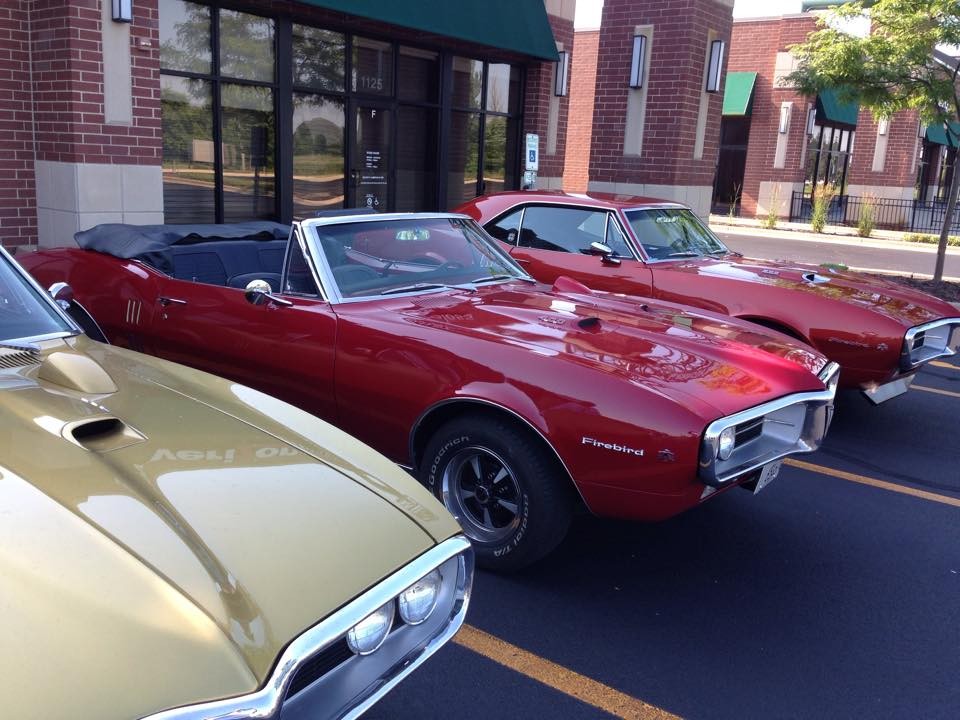 I’ve heard for years that car clubs throughout the country have had a great time getting together in the morning with their vintage vehicles over a cup of hot Joe – they call it Cars and Coffee.  Our club had our first one yesterday, which I think was a huge success.  It was a small group (7 members with 5 Firebirds & one Tempest)  but everyone had fun hanging out talking Pontiacs with no particular agenda other than to get our cars out early Saturday morning and enjoy each others company before we started our busy day. We started at 7:30 and ended at 9:00 – perfect!  And I think that is the key to why this idea is so popular for so many clubs – start early, make it close and keep it short.

After plotting all our local members on a Chicago area map, I found we have about 50 members in a large geographical area; from southern Wisconsin to northern Illinois outside the suburbs to Chicago then to the far South.  Cars and Coffee won’t work for us if we had just one meeting place & asked people to drive two hours for a short meeting.  So here’s my vision for our club, next time we’re going to have four meeting places.  This will make it easily accessible for everyone and still allow them to get together with other club members and hang out in little “Micro” sub-sets of our main club.  That’s the vision.  I’ll let you know later if we’re able to pull it off and what everyone thinks, but as of right now, I think we’re on to something good!  – Ken Pitcher 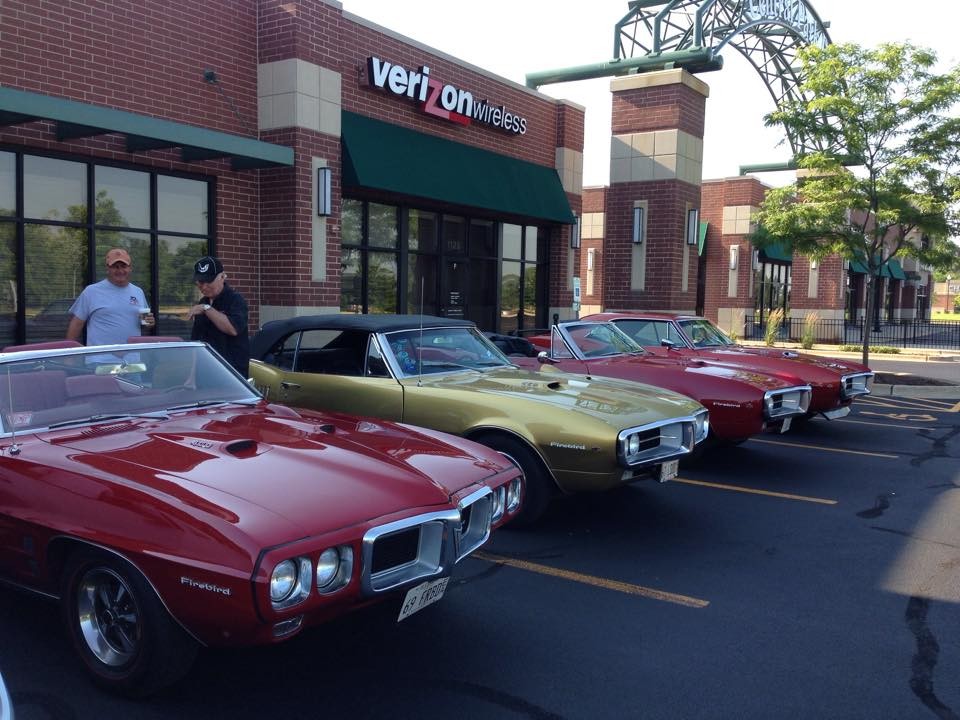 Vince and Jerry talk about Vince’s ’69 Matador Red 400 convertible he purchased last summer and has been tweeking to his preferences. 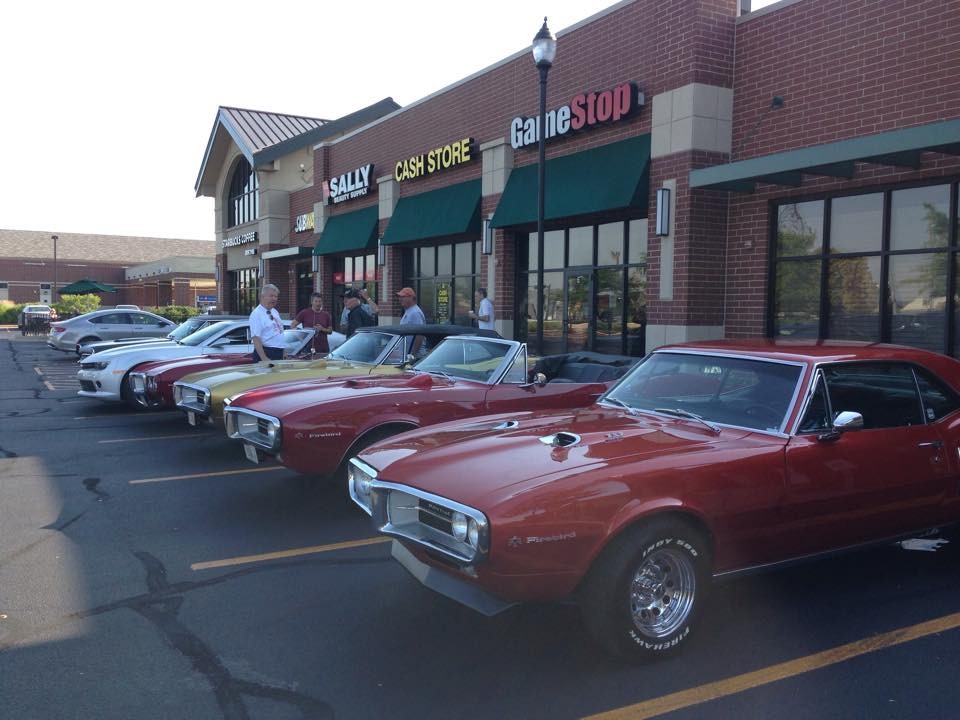 We had such a great parking spot in the shade in front of some businesses before they opened. 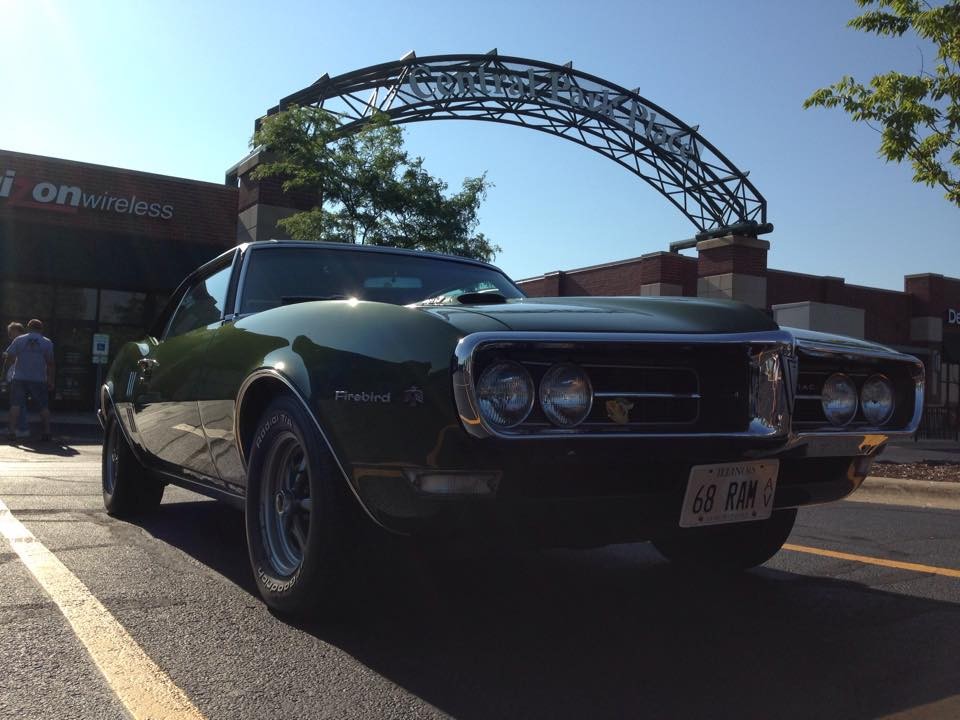 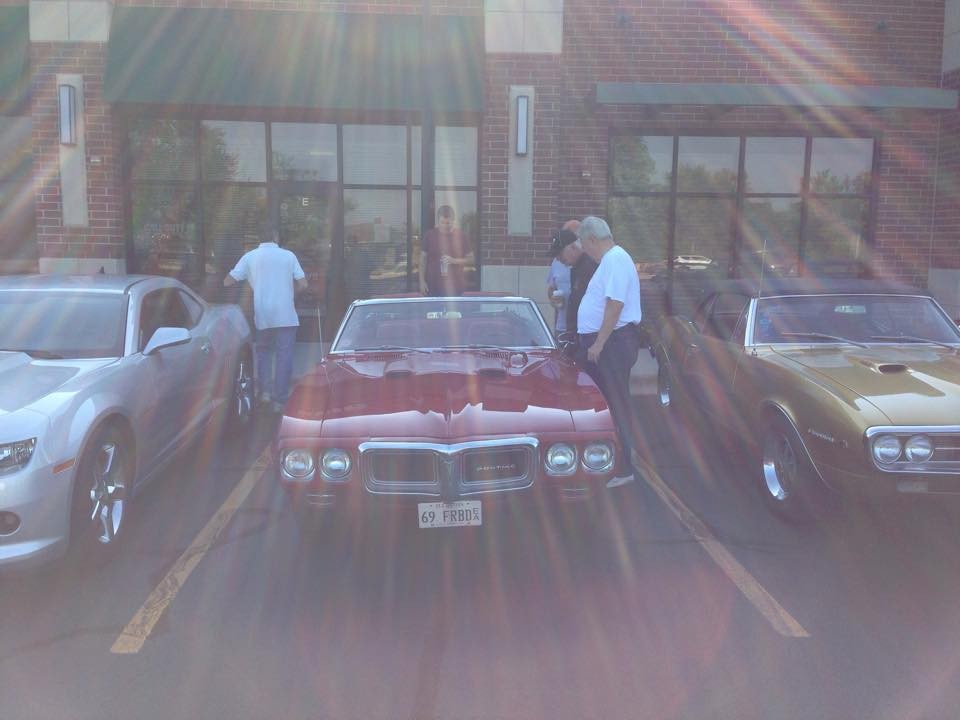 Sorry for the sun effect, I wanted to show Dan’s gold ’67 convertible next to Vince’s red ’69. Mike our club Treasurer, chose to drive his new Camaro – but that’s fine – our club is about people and friendships as much as it is about the Firebirds. 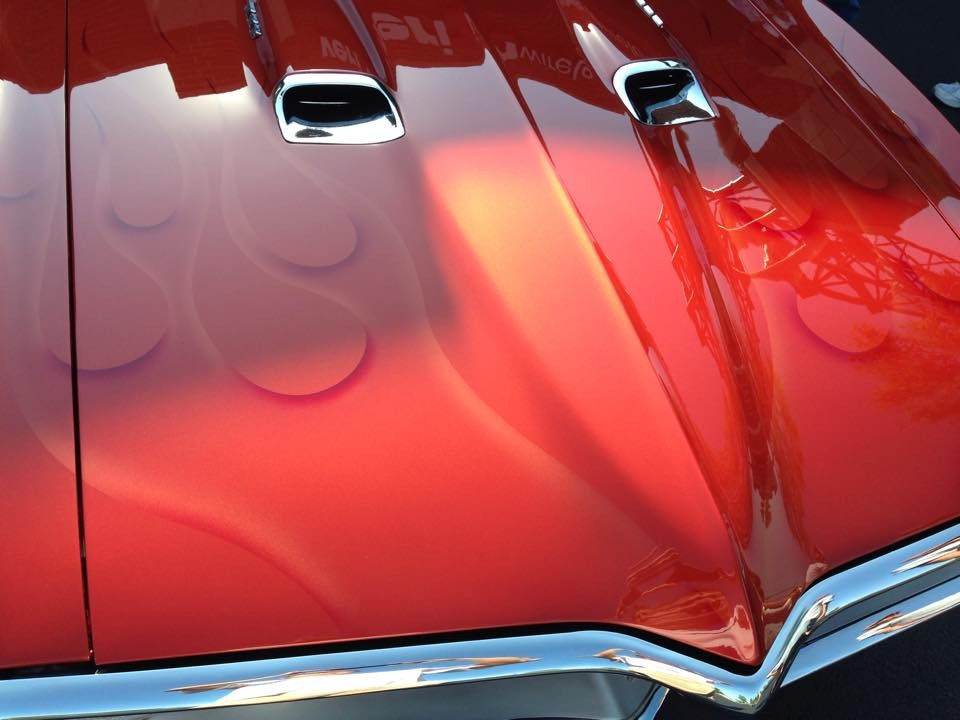 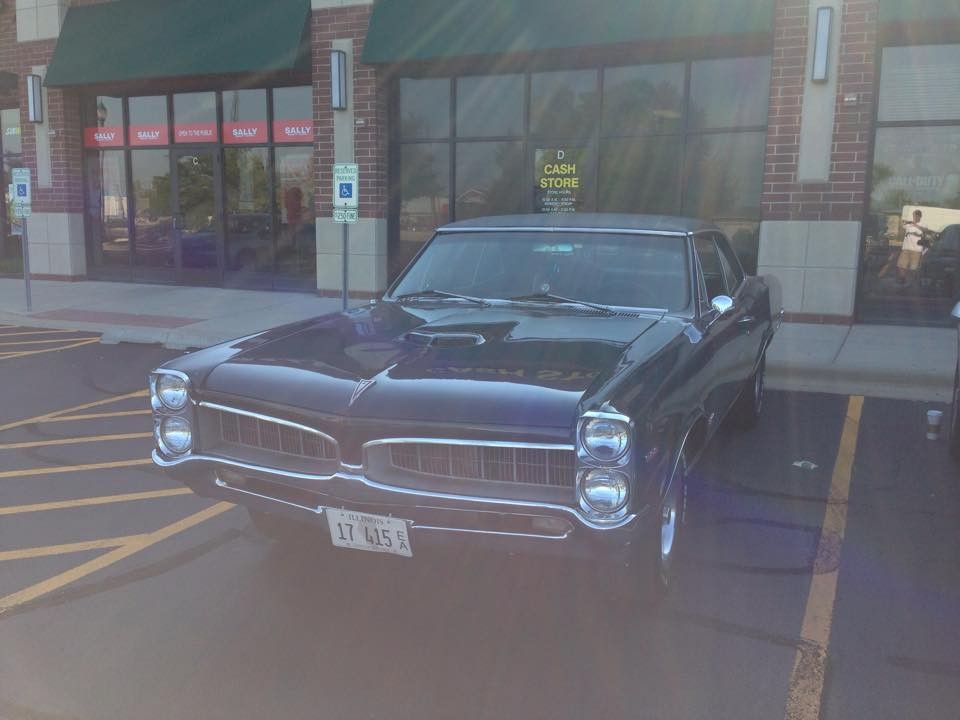 Glen has been working on restoring a ’68 Firebird convertible for several years. Today he drove his 1967 Tempest with a 400 and 4-speed – it was great to see this classic. 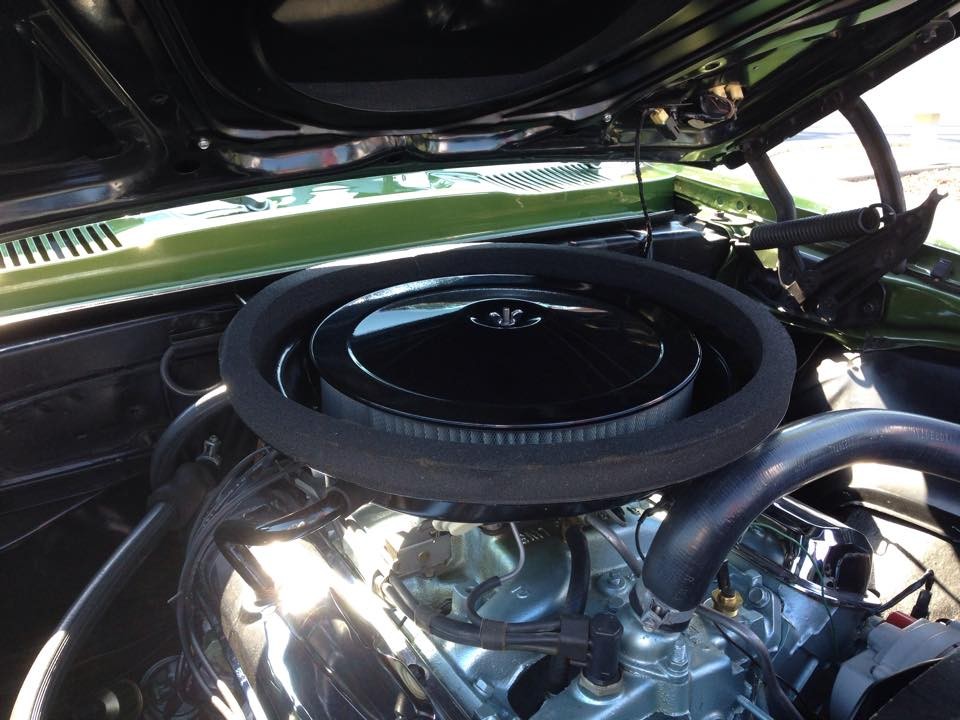 You can learn a lot about what a correct Ram Air engine looks like by seeing Chet’s concourse level restoration. 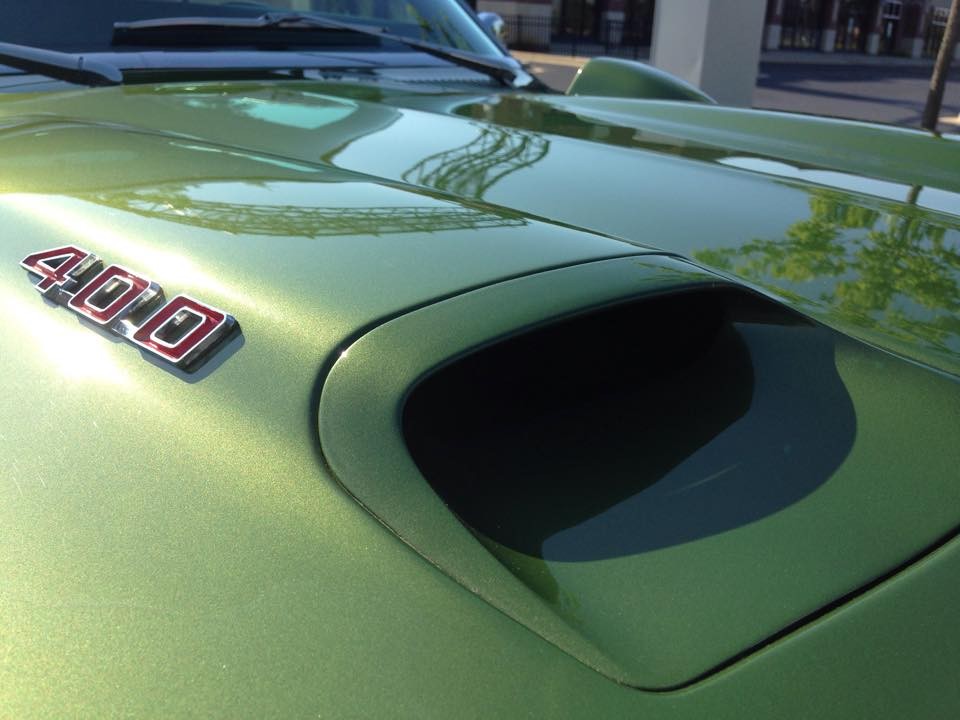 I love seeing the real-deal open hood scoops on this ‘bird. 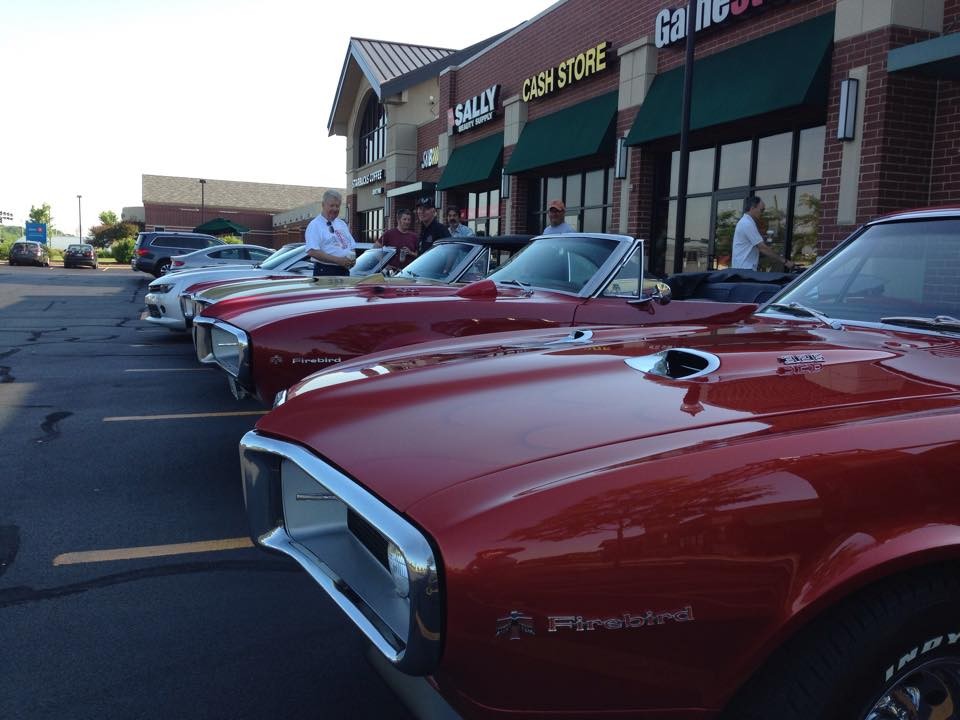 If you look closely at the car in the foreground, you can just barely see the flames painted on the hood.

We had such a great time for such a simple event – I can’t wait for the next one!