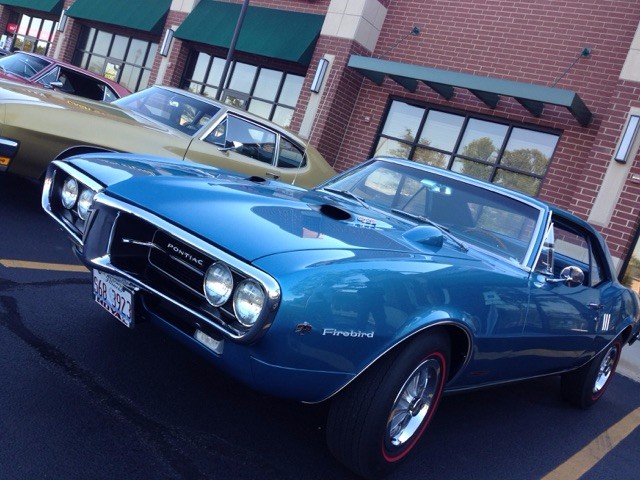 Our latest Featured Member’s Ride is a beautiful example of what you can do with a Firebird restoration.   Member Rob Rourke, from Lake Forest Illinois wrote to us about his award-winning 1967 Tyrol Blue Firebird coupe, he’s owned since he was 13!  Here’s his story and some great pictures of his ride. 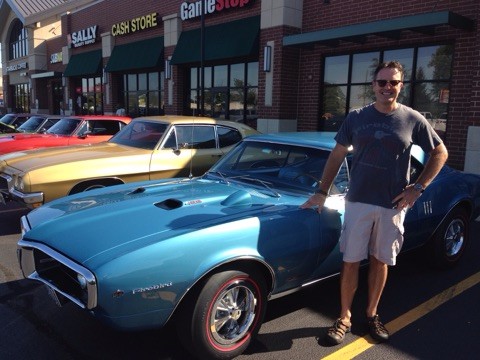 My 1967 Pontiac Firebird is a long term love affair.  It went through a 2.5 year frame off restoration from 2011 – 2013 where it was converted to a Royal Bobcat tribute.  The work was done by Midwest Muscle Car restorations in Allenton, WI.  They did an impeccable job with a great attention to detail and it won the Muscle Car Nationals Best of Show for first gen Firebird/Camaro at Rosemont in Fall 2013 scoring 994 /1000 points. 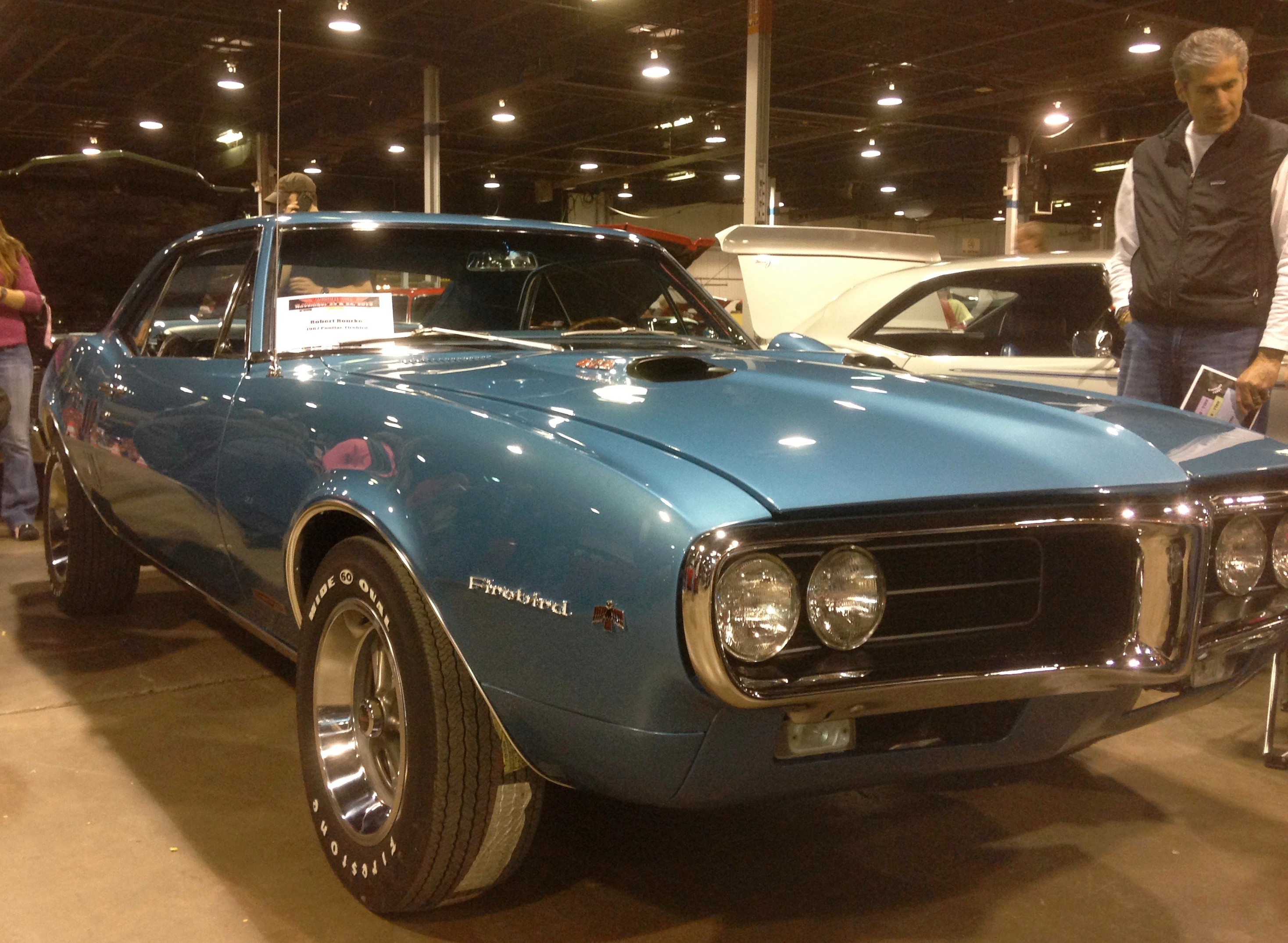 We first saw Rob’s Firebird in 2013, at the MCACN show, where our club board member, Mark Baratto is seen talking about the details of the restoration. 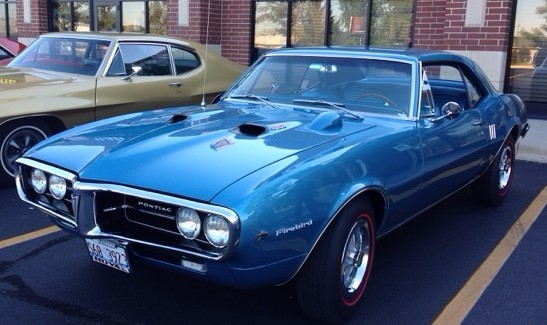 If you’re going to restore a Firebird, why not turn it into something special? How about a 460 hp, Royal Bobcat Tribute 4-speed monster? 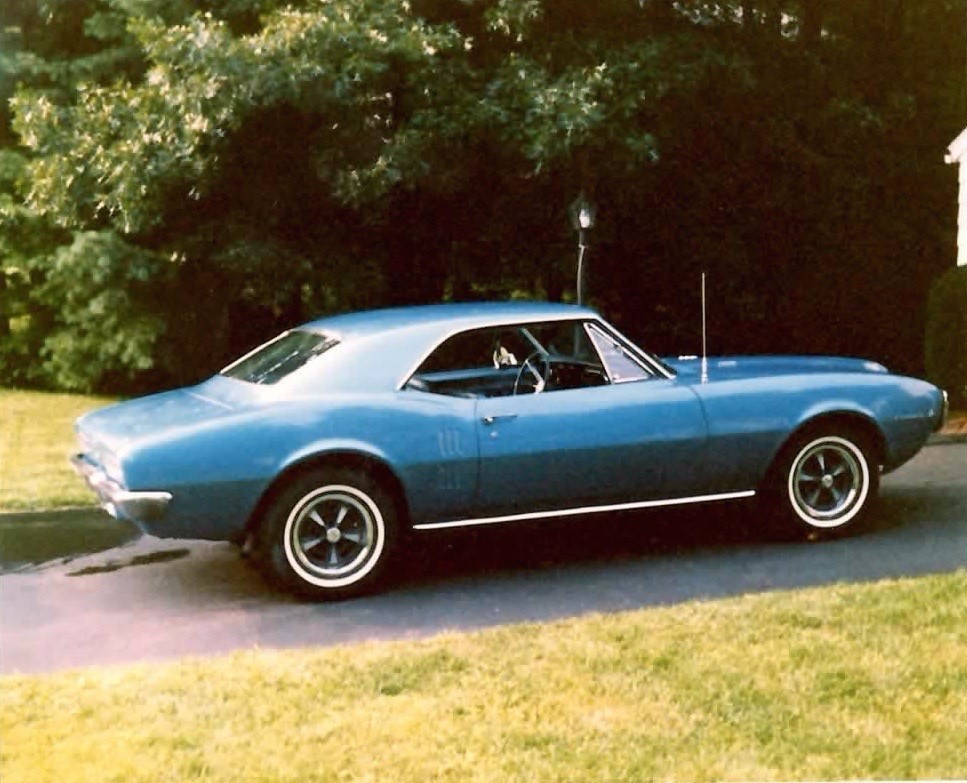 This is Rob’s very first car, and this vintage picture from 1985 shows just how nice she looked when he first got her. 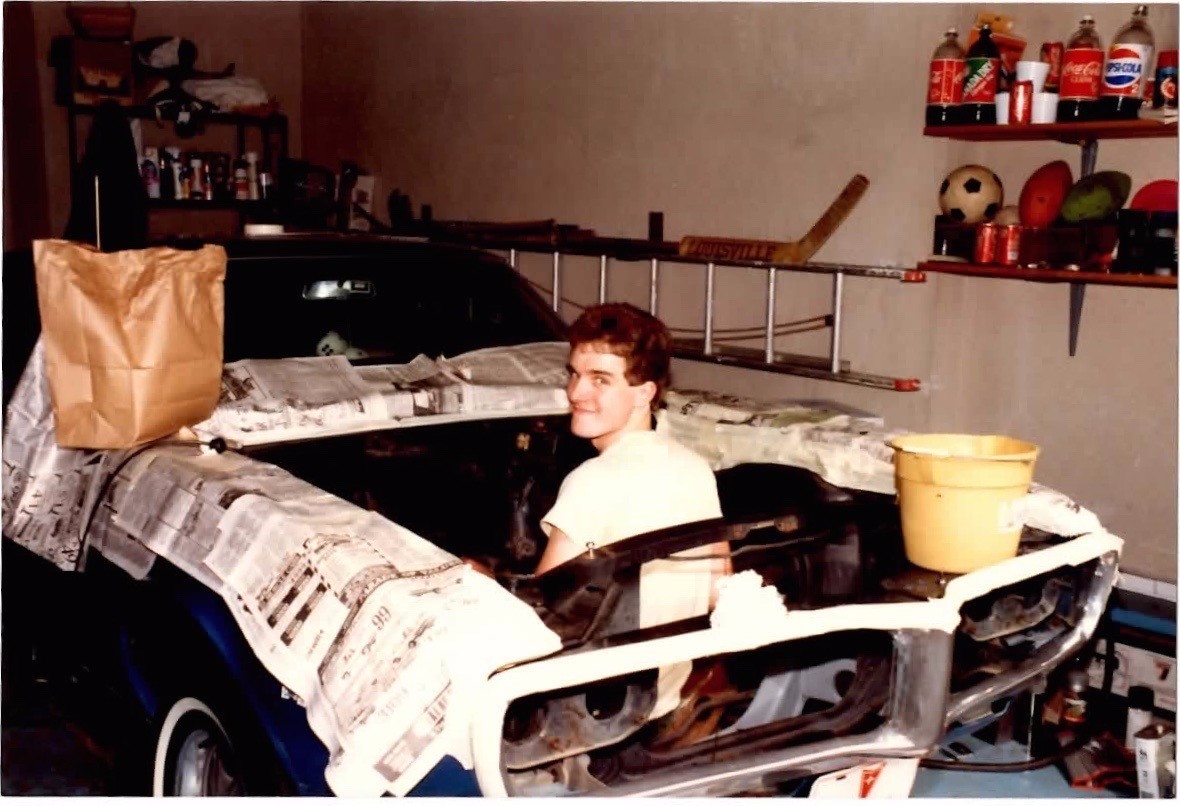 Every gear-head kids dream! Rob working on his car as a teenager.

My history with the car is much longer than the restoration, however.  I originally purchased the car in Southern New Hampshire in August of 1982 when I was 13 years old.  I paid $2,600 for it at the time.  The car was originally a 326 2v, Tyrol Blue with Blue deluxe interior.  The car had 59,000 miles on it at the time of the purchase and had obviously seen its fair share of New England winters!  My dad – a lifelong gear head – and I proceeded to work on the mechanicals and cosmetics of the car in the subsequent years to make it my daily high school driver.  By the time I headed off to college in 1986, we had done most of the interior, rebuilt the engine and transmission (2 speed Turbo hydromatic), fixed the brakes, improved the suspension, upgraded the exhaust – to make it sound a lot meaner than it actually was – and upgraded the tires and wheels.  The car was my daily driver in the summers between college and a weekend / fun car in the years after graduation. 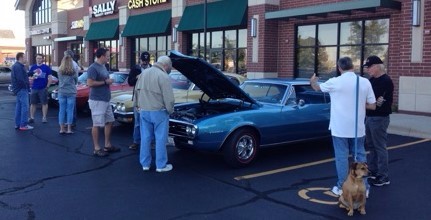 Our Cars and Coffee event in Crystal Lake in August was a perfect time for Rob to show off his baby to some of our club members. 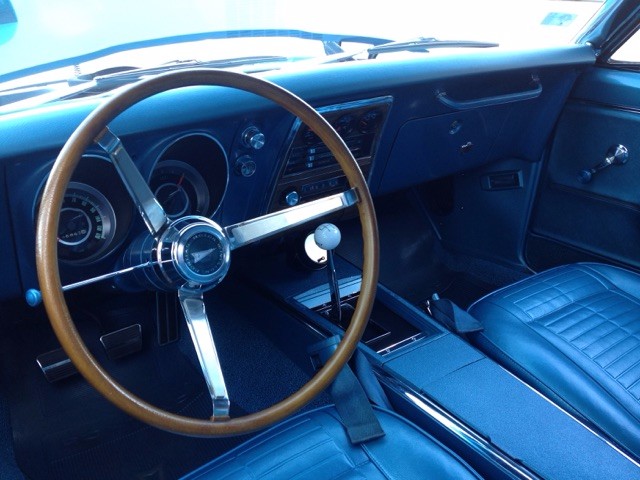 Some of the interior details include a wood wheel, Hurst shifter and Deluxe Blue Interior.  Notice how a ’67 counsel top is painted the same color as the interior. 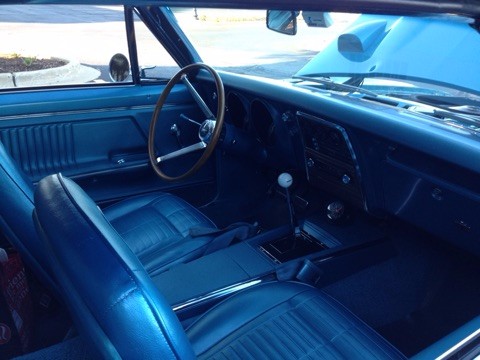 Another shot of the Deluxe Blue Interior which looks fantastic on a Tyrol Blue Firebird. You can even see the tall ’67 hood tach through the window. 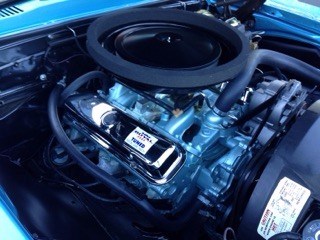 This 428 power plant is all business and sounded fantastic! Note the Ram Air foam air cleaner seal and the Royal Bobcat stickers on the valve covers. 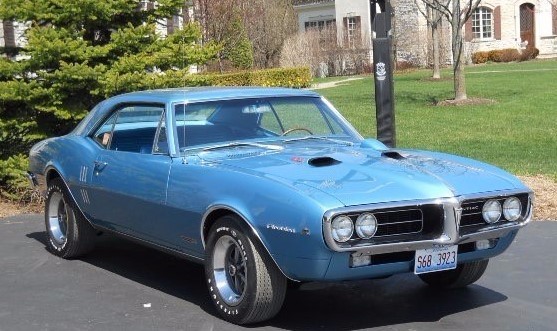 In 1995, I put the car in a barn outside of Boston when I moved to the Midwest to attend graduate school.  There, the car remained, for 5 years – as my plans to return to Boston upon graduation were waylaid by a job in Chicago.  The car atrophied, becoming home to a family of mice and succumbing to the elements, during this period.   As life happens, the Firebird also became less and less of a priority.  However, I could never come to grips with a potential decision to part with it.  In 2000, I transported it from Boston to Chicago where it continued to occupy a range of storage garages between Andersonville, Wauconda and Lake Forest; that is, until 2011 when I finally made the decision to do the full restoration. 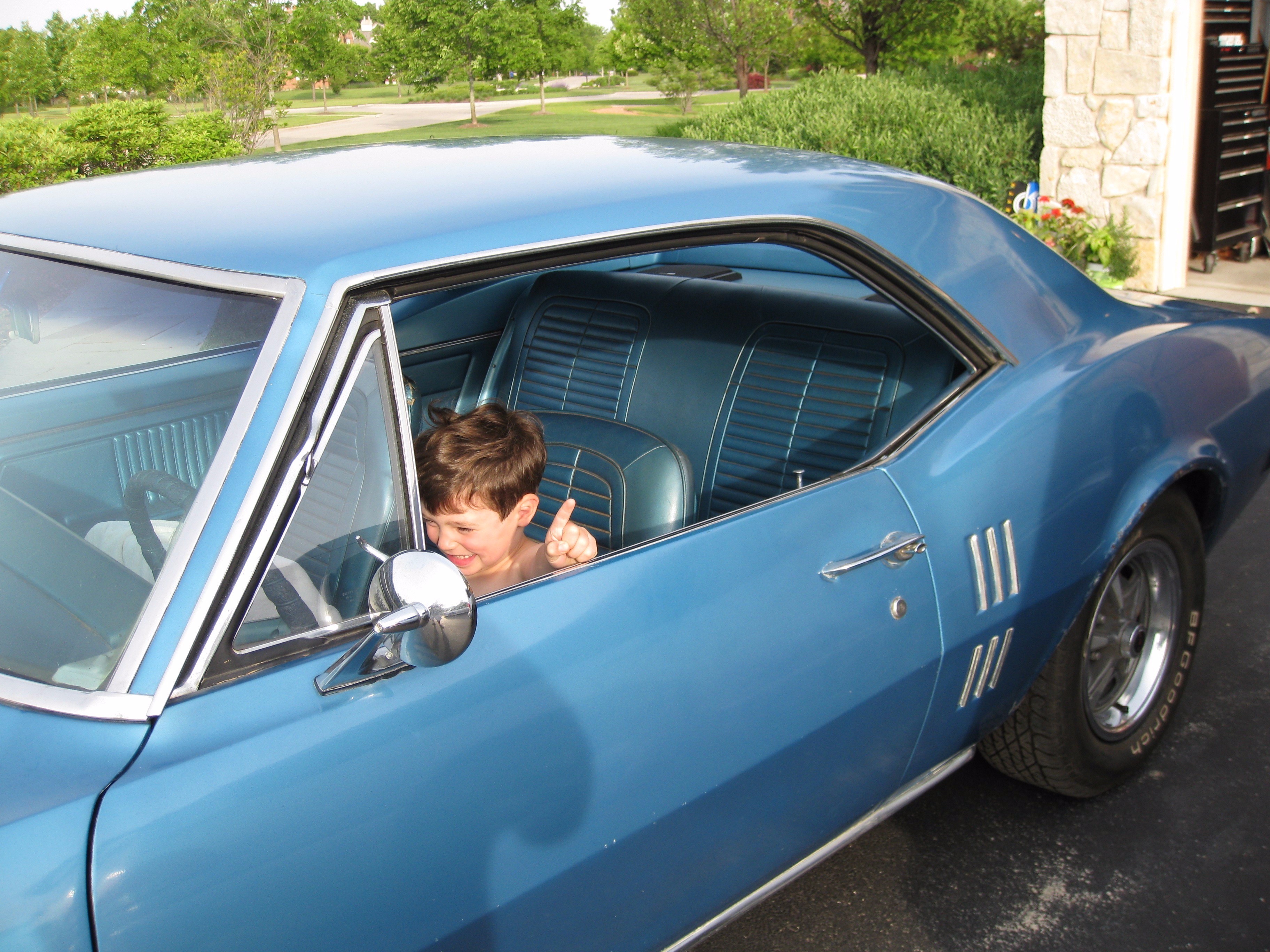 Rob’s son, Andrew prior to the Firebird going off for the restoration in Wisconsin. 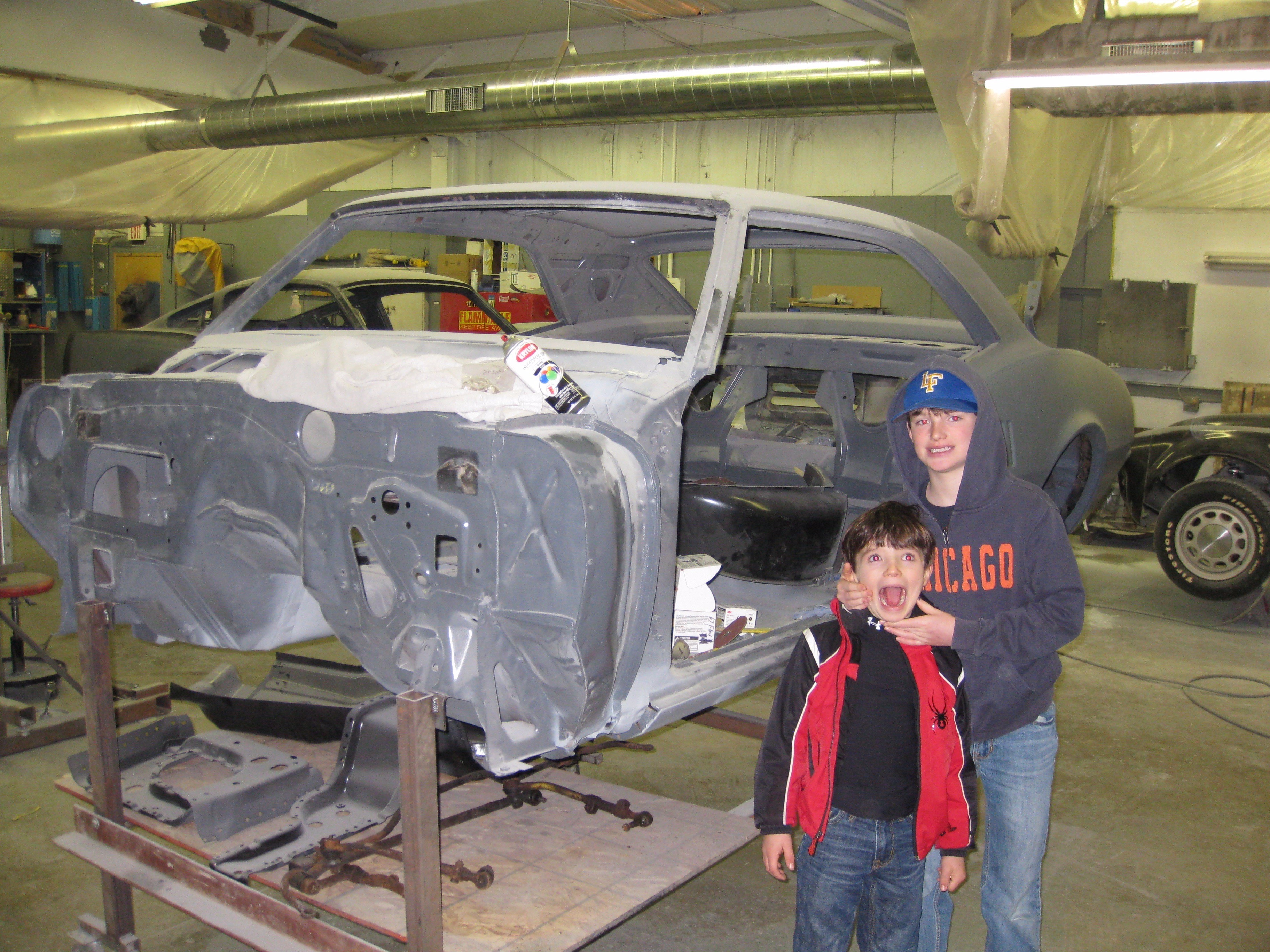 Sons Andrew and William inspecting the restoration progress in 2012, with the Firebird striped down to the primered shell. 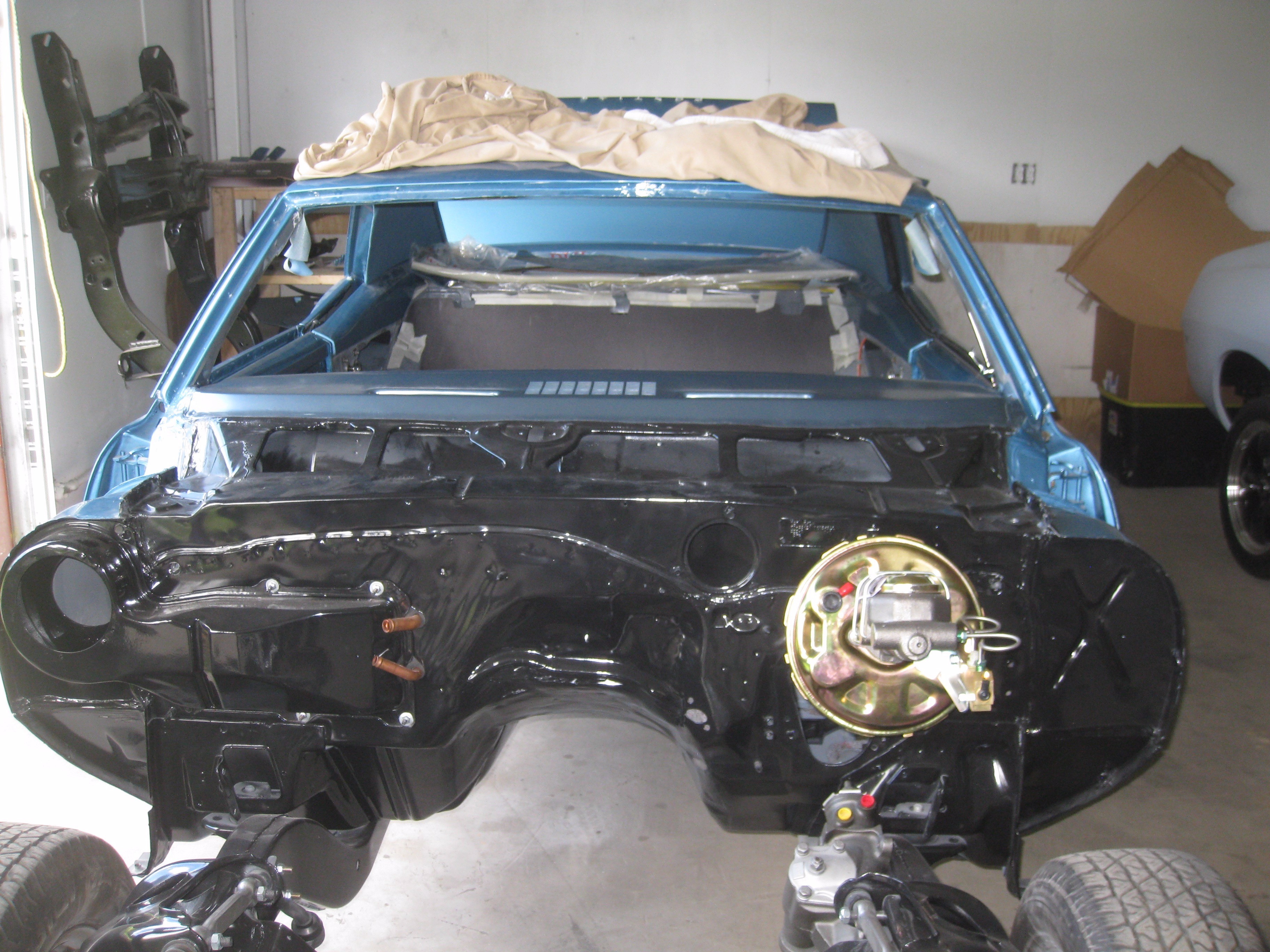 Getting closer to completion in 2013. 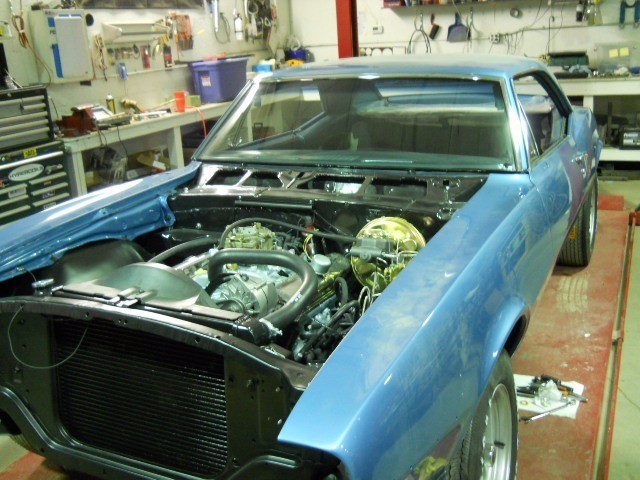 The 428 has a new home, and they’re getting closer to completion every day. 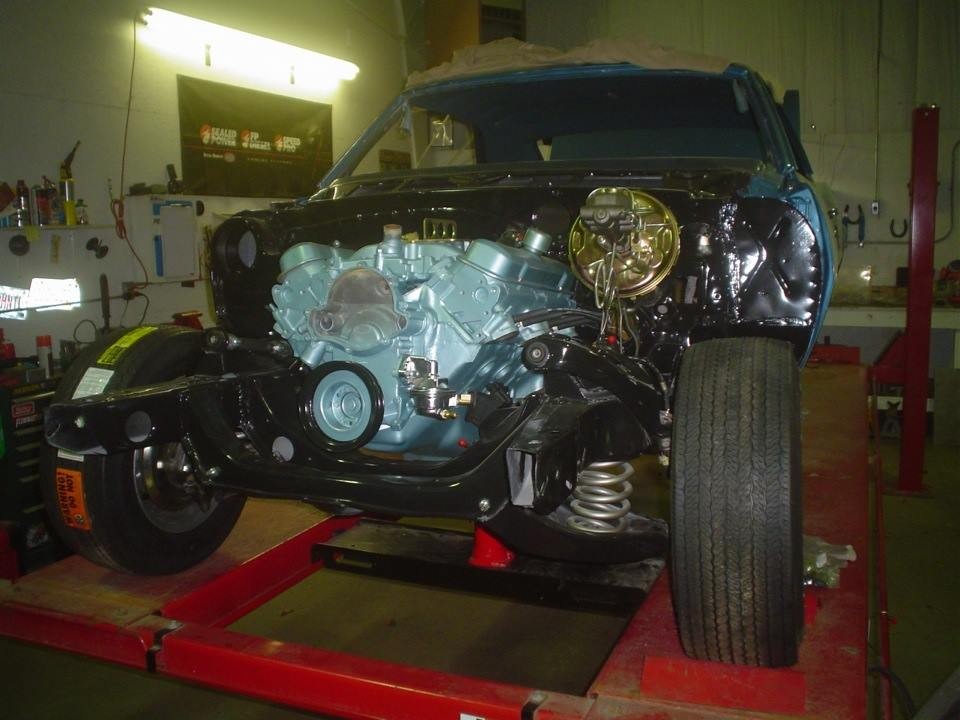 A beautiful restoration right down to each nut and bolt was performed by Midwest Muscle Car Restorations in Allenton, Wisconsin.

The decision to restore the Firebird was easy – how could I not want to restore my first car, the one that I spent countless hours working on with my dad as a teenage boy?  However, the question of “how” to restore the car was a much more complex topic.  Did I want to make it factory authentic?  What level of quality?  How much to spend? Where/who should do the restoration?  What role should I play? The more I thought about it, the more I decided that I should turn this car into something really special (to me at least), and something that I could, in turn, one day share with my own sons.  And as a researched what to do, the answer became clear – make it a Royal Bobcat Tribute.

Rob used this historical shot of a Royal Bobcat Firebird as one of the many examples of what his dream car would finally look like with the Hurst Wheels and Red Line tires. 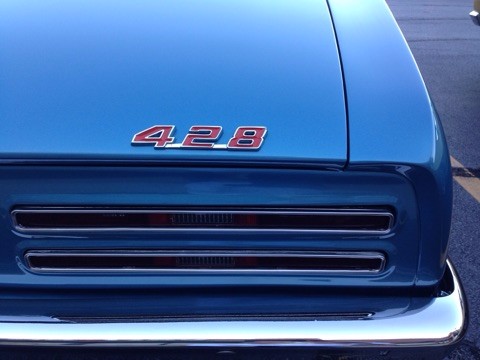 Although Firebirds did not come from the factory with anything larger than a 400 cubic inch engine in 1967, that didn’t stop the boys at Royal Pontiac in Royal Oak Michigan from droping in a specially-tuned 428 to light up the pavement wars of the 60’s. 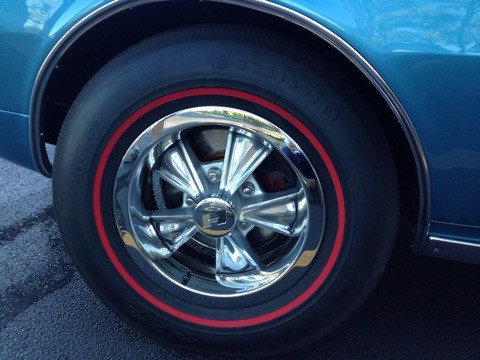 A close-up of the beautiful Hurst wheels and Red Line radials. 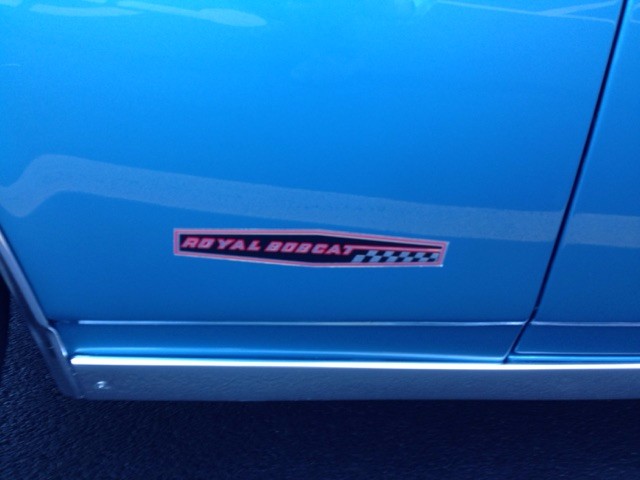 There were only a few subtle markings on the Royal Bobcat cars to differentiate them, such as this plaquard which mimics the early Grand Prix logo. 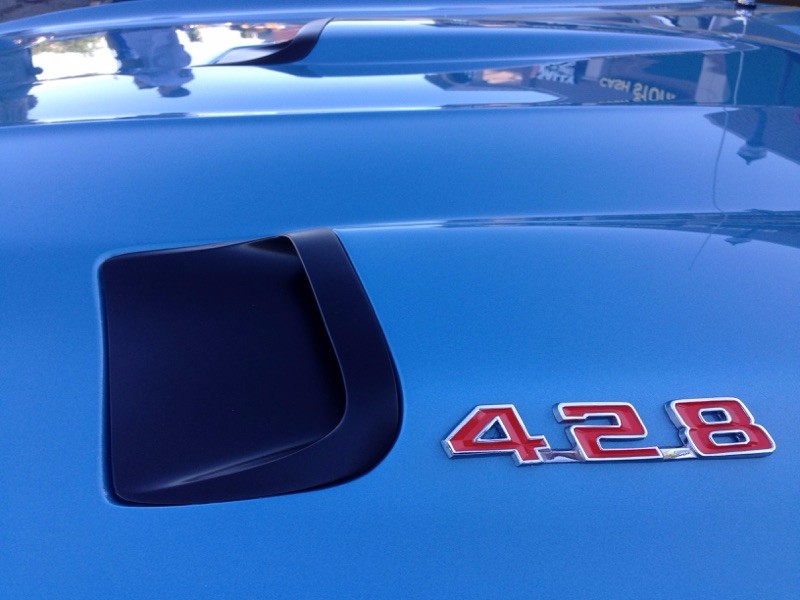 The blue paint has that perfect wet-look and is a mile deep. Rob finished off the car with open, functional hood scoops painted black to match the blacked out grill.

Many people are familiar with Royal Bobcats in GTOs.  In fact, Royal was probably most famous for its GTOs.  But they also did quite a few Firebirds and they offered various levels of customization/ performance to cater to their customers’ needs.  These cars “Royal Ringers” were beasts.  A 67 Firebird tweaked to Royal Level I modification ran a 12.75 ¼ mile in Cars Magazine test drive in 1968.  A 67 Firebird set up to Royal Level 2 modification ran a 13.05 ¼ mile in MotorTrend that same year.  In 1968, a 428 Firebird built by Myrtle – to Royal level II specs – ran a 12.55 ¼ mile in Popular Hot Rod.  These were indeed beasts.  Royal’s set ups varied (Level I vs. Level II) and consisted of altering the timing, rejetting the carb, using thinner head gaskets to bump the compression, removing the heat riser, and putting in a bigger cam.  However, if you went for a “full” package, they would drop in a 428 and build it to Level II specs. 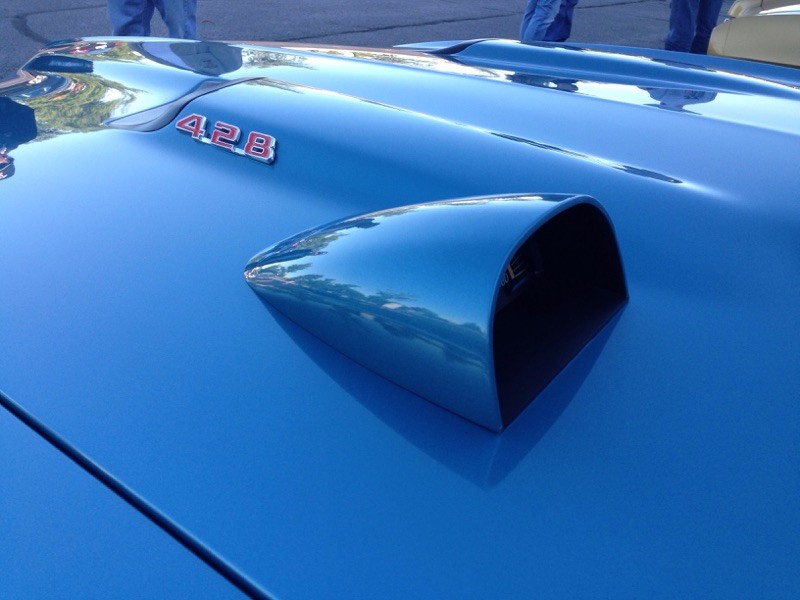 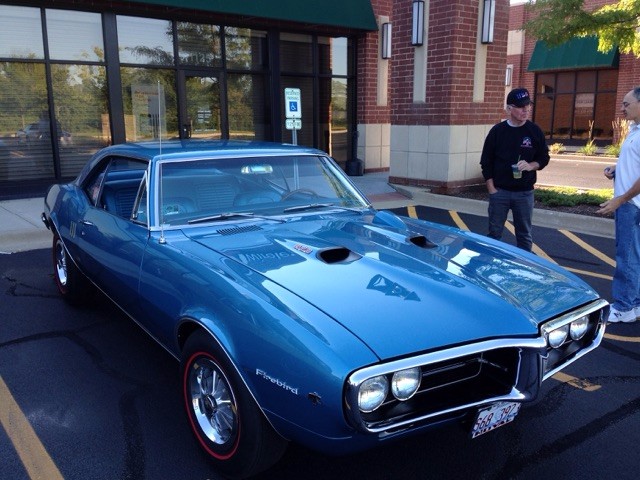 Club members Jerry and Mike discuss the finer points of Rob’s restoration including the Hurst wheels and Red-Line tires.

When I set out to do my 67 Royal tribute, I wanted it to be as authentic to the original as possible.  We found a 428 date and factory coded block.  We had it rebuilt with forged pistons, a date-correct Rochester q-jet (pumping out 900 cfm), ram air IV cam and Ram air III ported heads and manifold.  Bored .30 over.  The car is matted to a 4 speed M-20 and 3:55 posi gears.   Other than adding disc brakes and MSD distributor, the car is 100% authentic to the period including the Hurst wheels, red line bias ply tires and the appropriate Royal markings.  The car was dyno’d at 460+ bhp.   Very fun to drive. 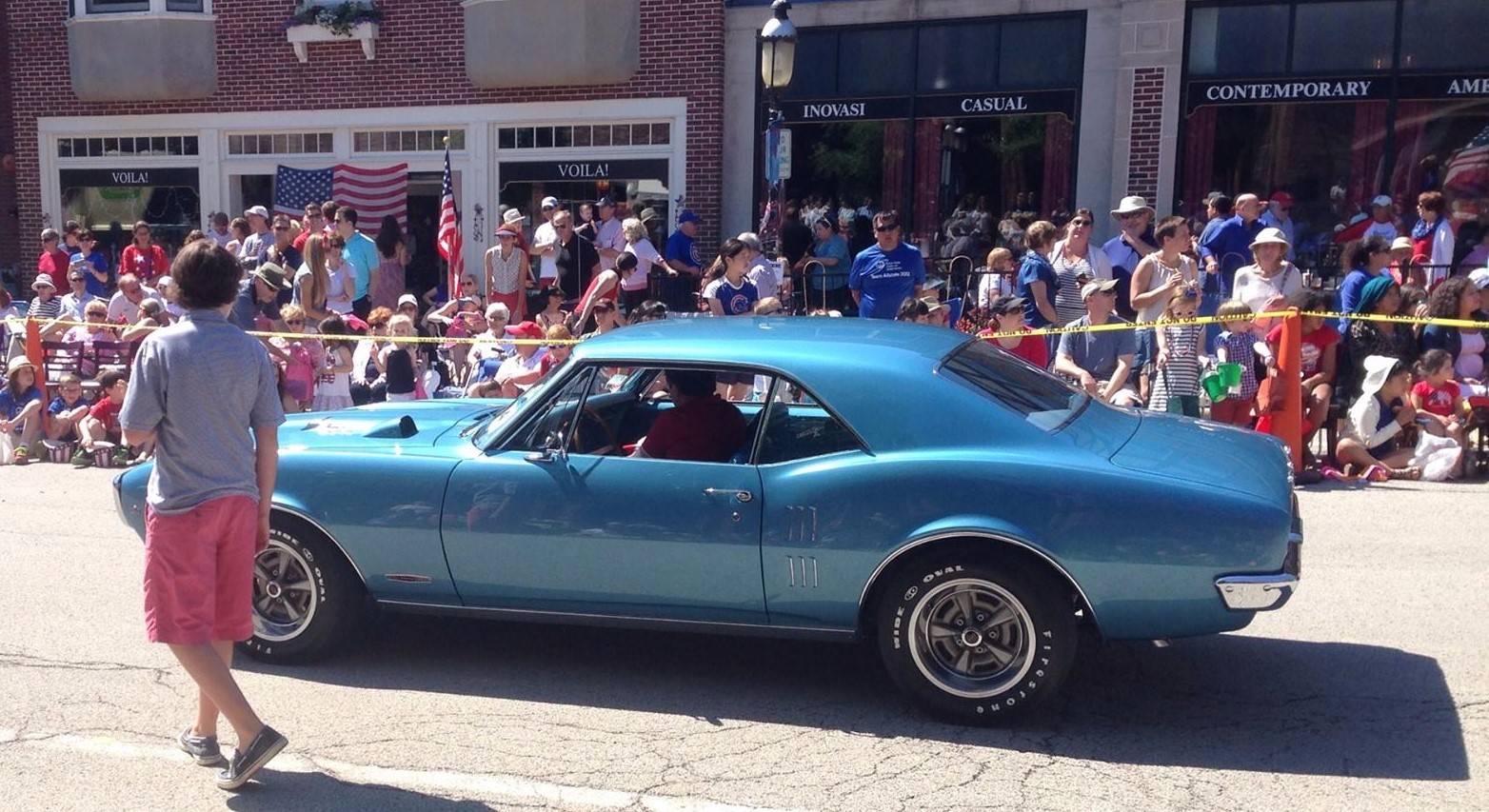 Vintage cars are always loved at the local parade – and Rob enjoys showing off his Firebird for the home crowd.

And drive it, I do.  This is my main car on the weekends.  I drive it to my kids’ sporting events, first day(s) of school, date nights with my wife, and — of course – to the gas station.  And though it is noisy, hot and smelly, it is a by far the vehicle of choice for the family.  I couldn’t be happier with it.  And a little plug for Midwest Muscle Car restorations –  they couldn’t have been better to work with. 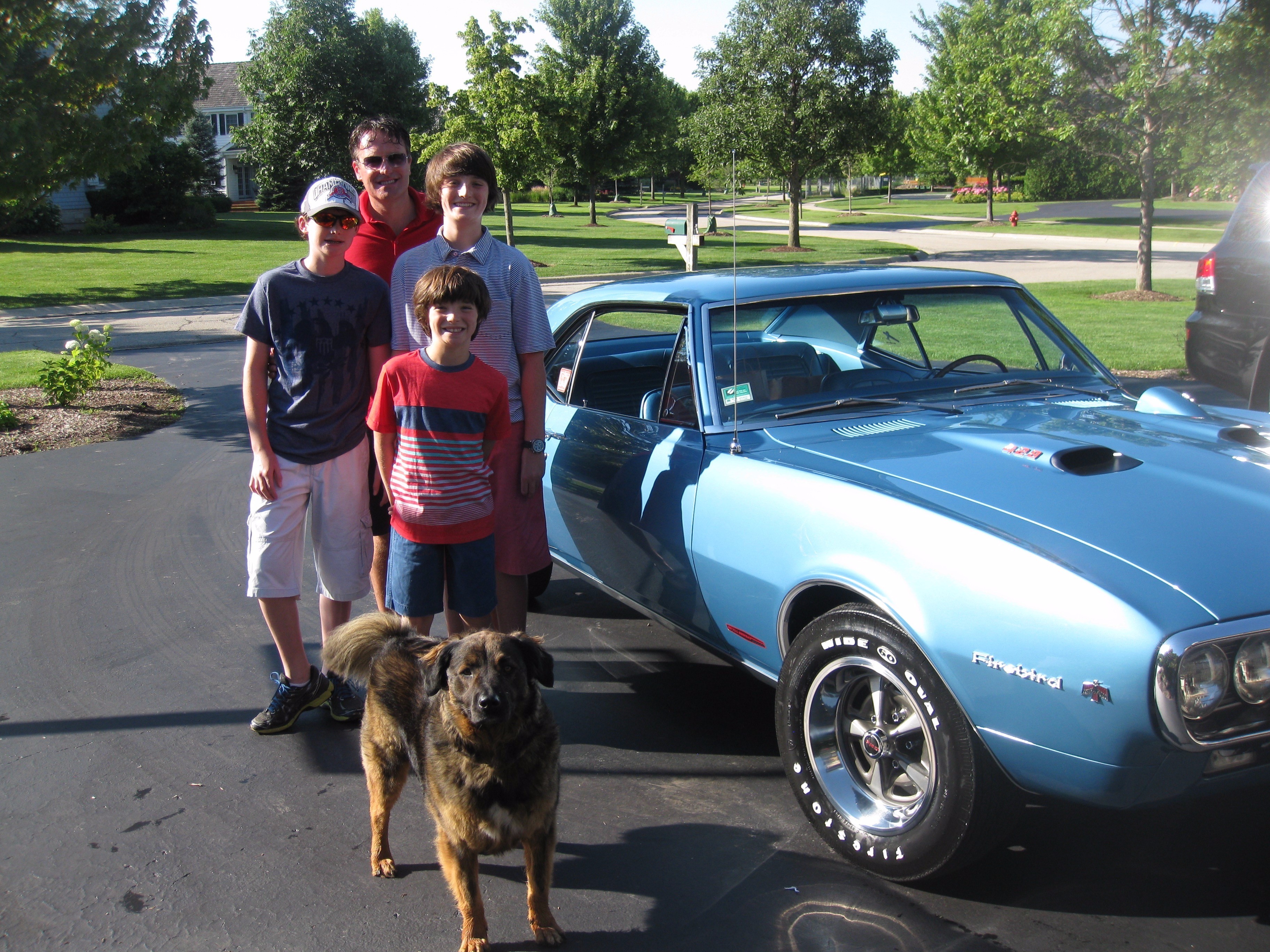 Back home with the family, Rob’s three sons just love their dad’s Firebird – expecially since they know it’s going to stay in the family for a long, long time!