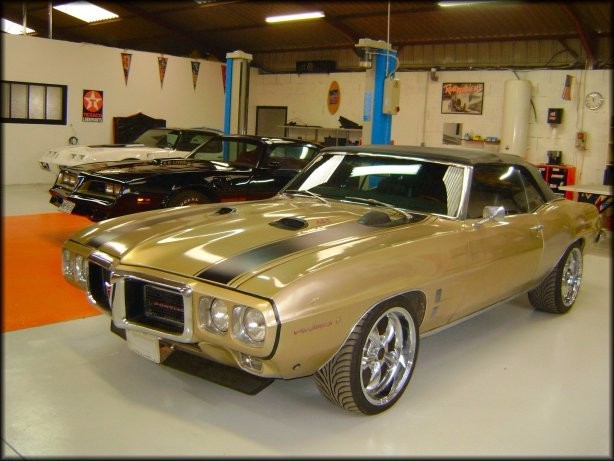 …. American Firebird that is, and actually not just one but several.  Here’s a fun story, with a rock n roll vibe, about William Ribiere, and his American Muscle Car shop “Pro-V8” in Vouille-les-Marais, France, just a few hours south of Paris. 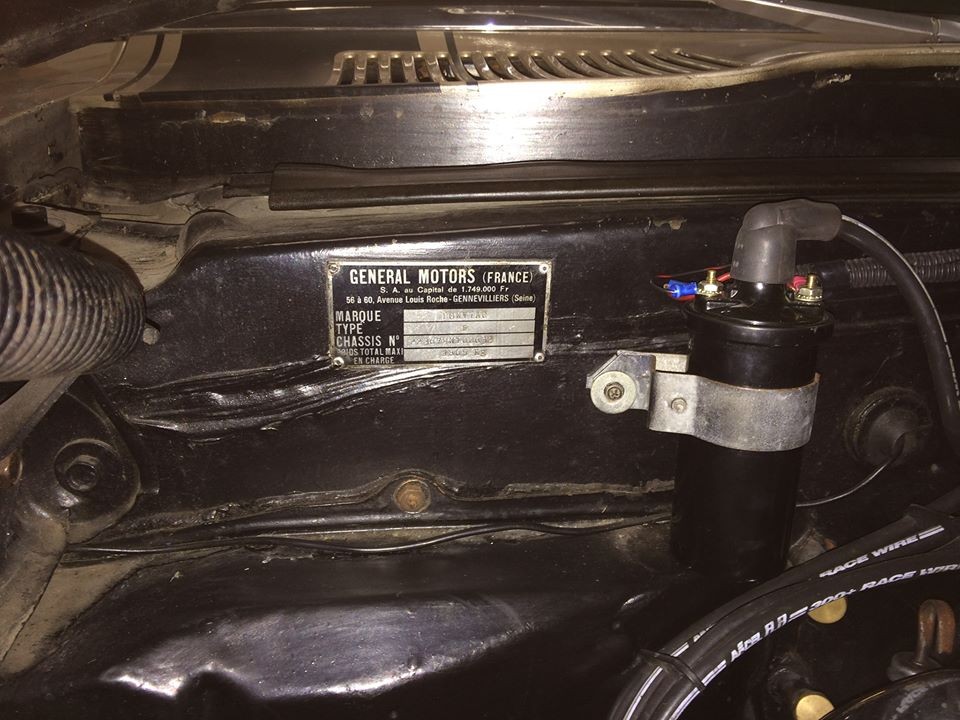 An unusual body tag, found only on GM vehicles sold new in France.

This “GM France” discovery put me into a research mode to try to find out more about them, and exactly what they are.  While I am not finished with my research (and I think this would make a fascinating story for another post) I can tell you a little about what I was able to discover.  I can also tell you that there is very little written about this topic for Pontiac vehicles. 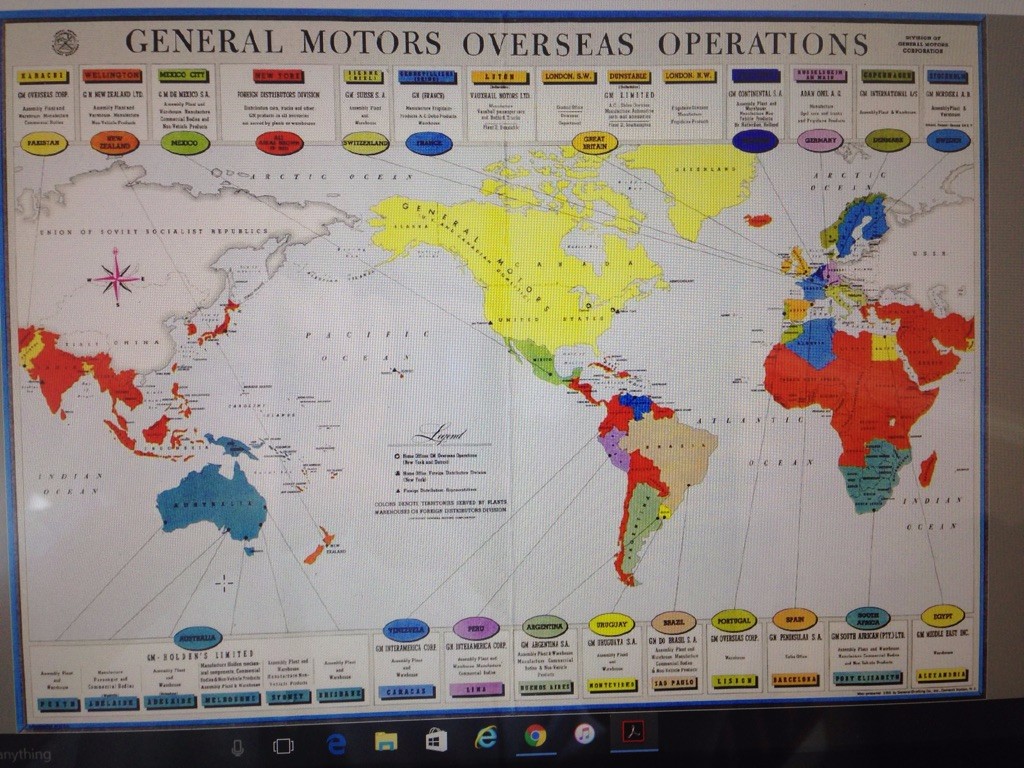 This map from the GM Archives, shows all the foreign factory / assembly locations around the world. Courtesy GM Heritage Center.

Mike Noun, noted Pontiac historian, writer, and one of our club’s technical advisors, told me about an article about Camaros which highlighted five Camaro foreign assembly plants throughout the world, one of which is in Antwerp Belgium (which we know did assemble some Pontiacs too.)  This article, written by Kurt Sonen as a Camaro Research Group report, referenced something called “Completely Knocked Down” (CKD) kits.  “All of the non-U.S. factories assembled Camaros from (CKD) kits.  Parts and subassemblies for CKD export units were shipped to a central collection point (called a “boxing plant”), consolidated into kits, then packed into containers for shipment overseas to small GM joint-venture and contractor-operated assembly operations.  The boxing plant was located in Bloomfield, NJ and was managed by GM Overseas Operations.” 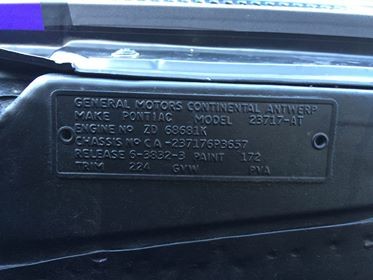 This is a special GM Belgium body tag from a 1966 Pontiac Lemans with an OHC six engine.  So we have evidence from William of Pontiacs assembled in Belgium, but he has never seen a first gen Firebird with a 400 from there. 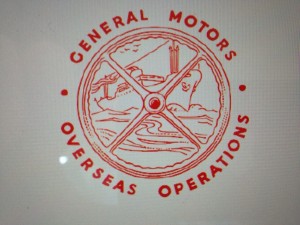 Next, I spoke to Jim Mattison, a former executive at General Motors and owner of the Pontiac Historical Society, he told me more about GM Overseas Operations, and how they would ship both finished vehicles overseas as well as unfinished vehicles, which would save taxes because they would be considered “parts” not vehicles.  He said the vehicles were very close to finished, so there really was not a lot of major work going on with the final assembly. 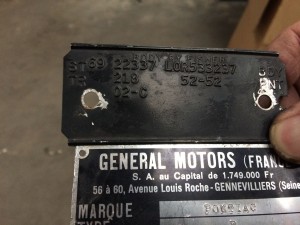 Here are the GM France body tag and the standard body tag for the 1969 Red 400 coupe seen below.

I was able to find a little information from the General Motors Archive, from the GM Heritage Center, that referenced the factory (pictured above) at Gennevilliers, France where the Firebirds were assembled.  This factory was started by GM in 1939, and was mostly used for production of Frigidaire products, and an AC Delco products warehouse.  However, the GM Archive information specifically states “A new plant went into operation at Gennevilliers, France, on the outskirts of Paris, for assembly of completely knocked down (CKD) cars and trucks.” 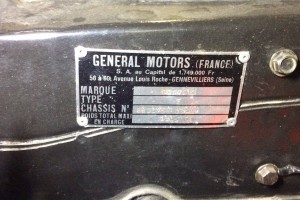 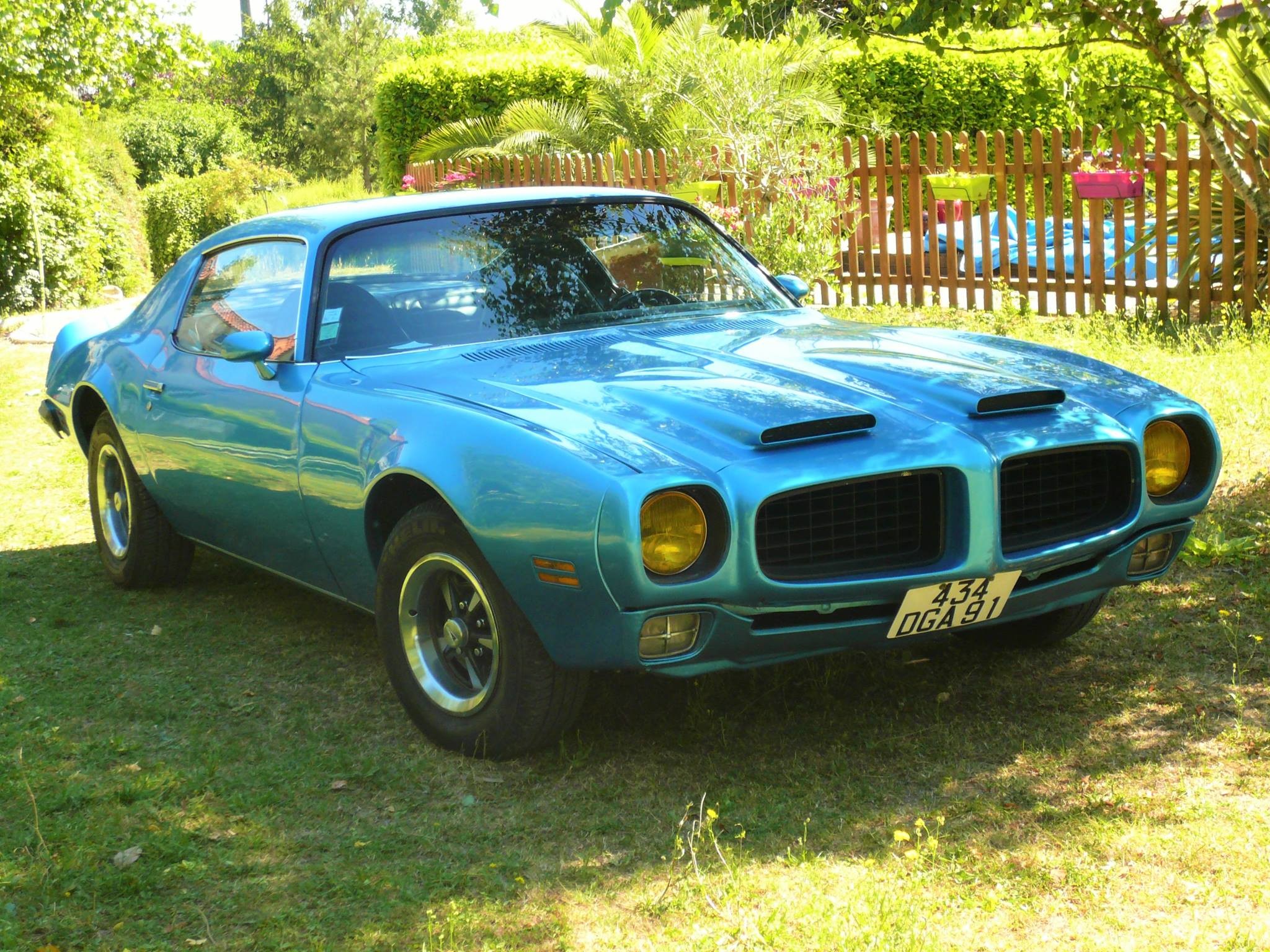 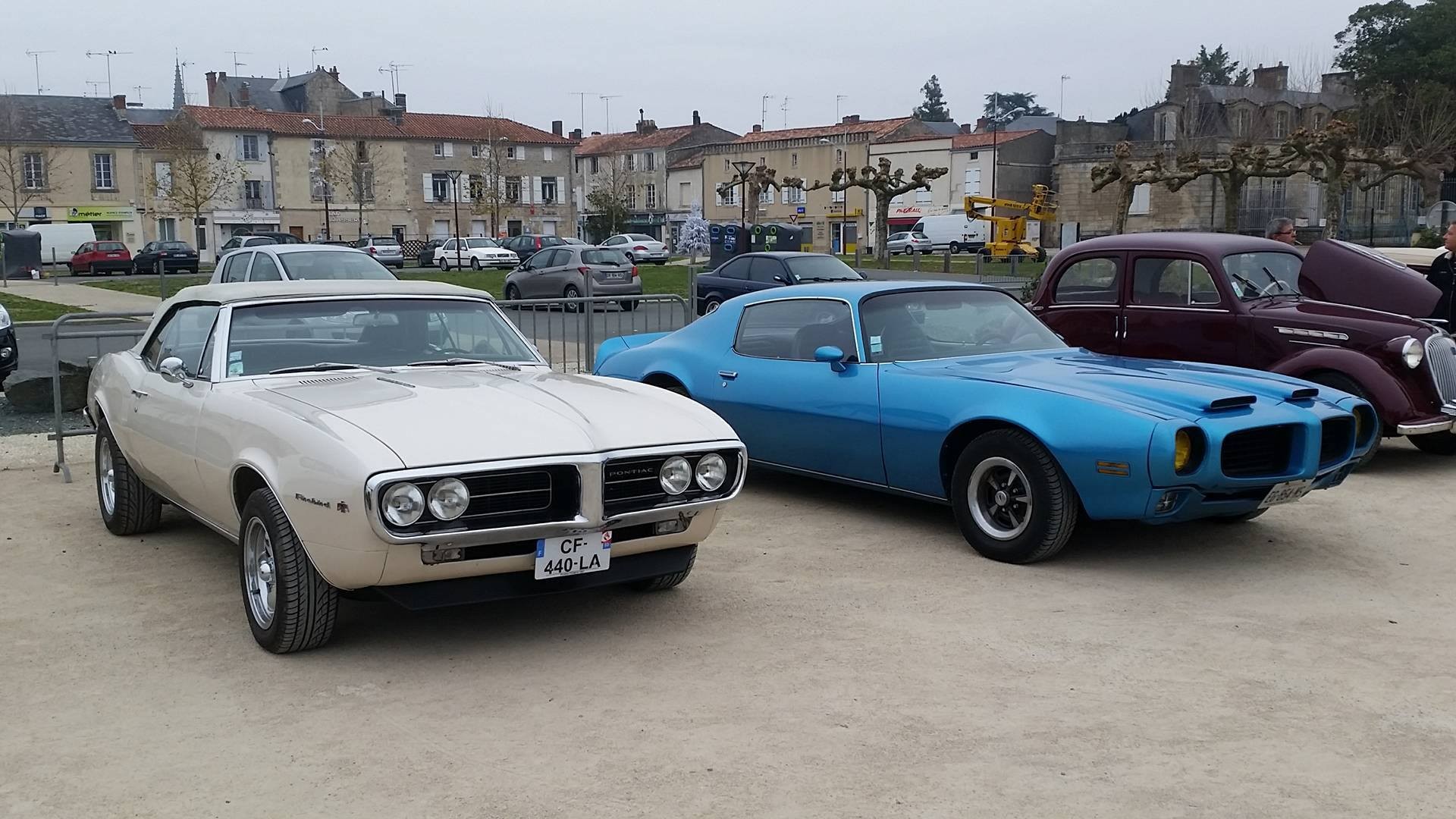 A Firebird family from France – Jules’ father owns this sweet ’67 OHC 6 convertible. They frequently go to local car shows together.

One of the most interesting things about these foreign-assembled vehicles is that for the Camaros, Sonen states they have a special letter in their VIN to designate which of the five foreign plants assembled them.  That is not true with these GM France vehicles, we checked the VINs on three of the Firebirds, and they were normal VIN numbers – adding to the mystery.  Now here’s just how rare these American Muscle Cars are in France, William told us: “Only sixteen 1969 convertibles were bought new in France, and only about eight are still running today!  The ‘69 convertible and ‘68 coupe, are running well and will be repainted to their original factory colors. The ‘69 convertible below, was “champagne” paint code 63.” A friend of WIlliams, posing for a vintage-style photo with his ’69 convertible. 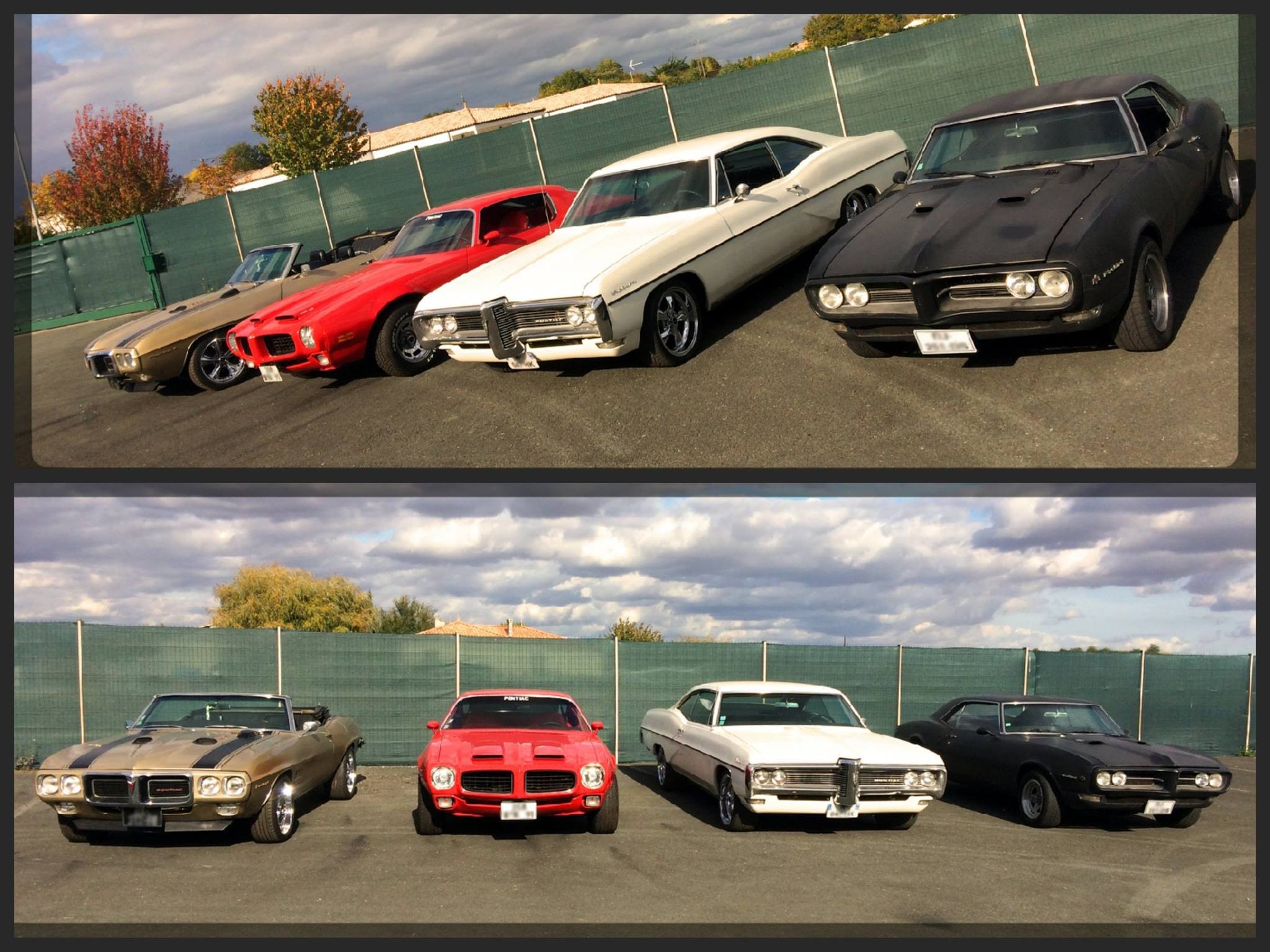 So I had to ask him to tell us more about his shop and how his passion started with American muscle cars in the first place. “Here’s my story, I’ve been working on American engines, and especially Pontiacs for the past 15 years. Five years ago, I decided to open my own shop, and ever since that time, I have had a full work schedule!” 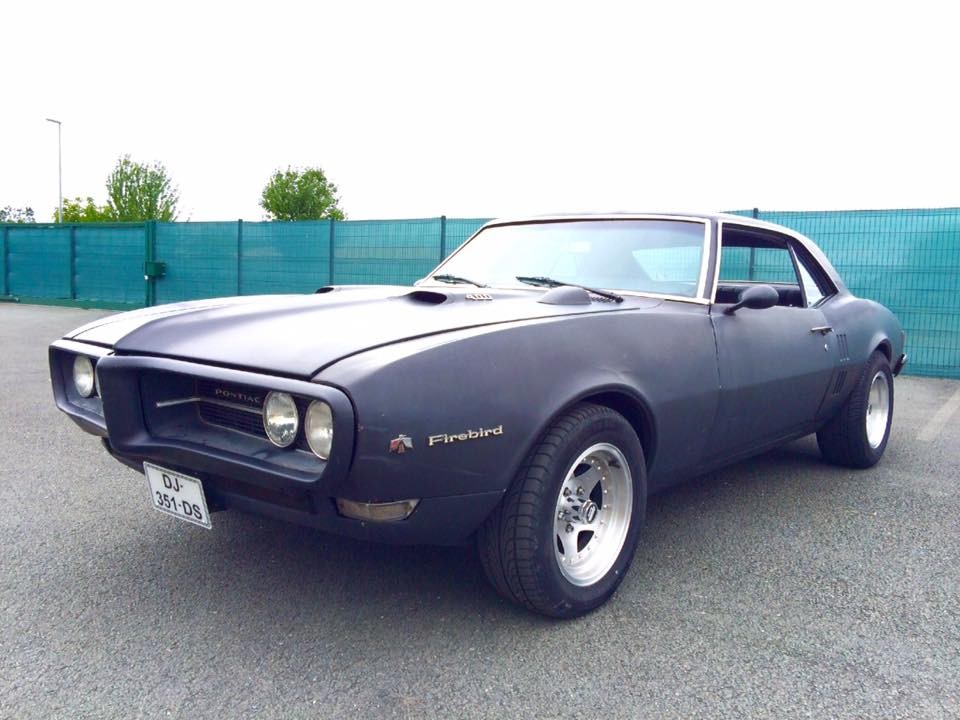 This ’68 400 coupe looks nice with a few added modifications. 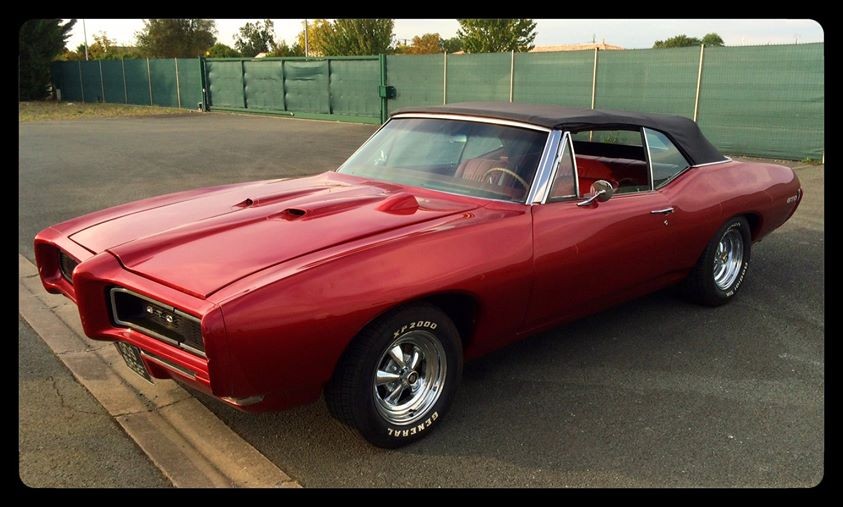 A georgous ’68 GTO convertible William has worked on. 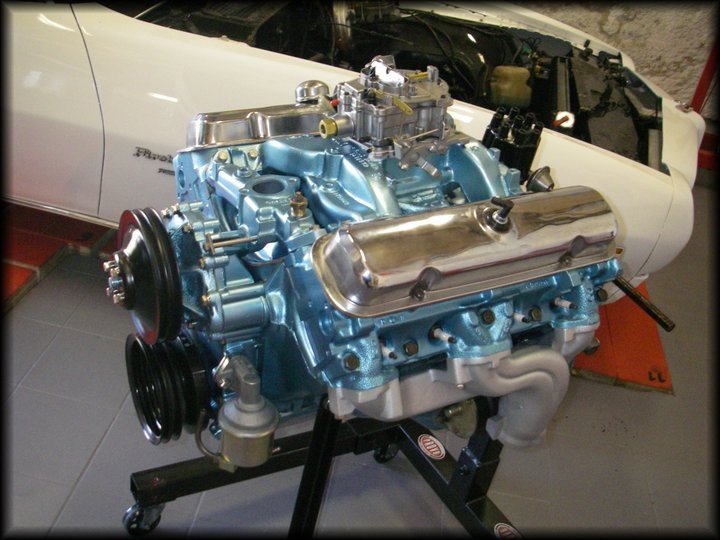 You’ve got to love a freshly done Pontiac 400 engine all ready to go into the white Formula behind it.

“I have rebuilt many engines, and worked on many cars (even a Jensen interceptor, two Facel-Vega, and some Excaliburs) but I am well known in France for building Pontiac engines. From stock rebuilds with a completely stock look or powerful stroker engines. I even worked with Butler for parts. I have also learned with some very famous books (McCarthy, Jim Hand, and more).” 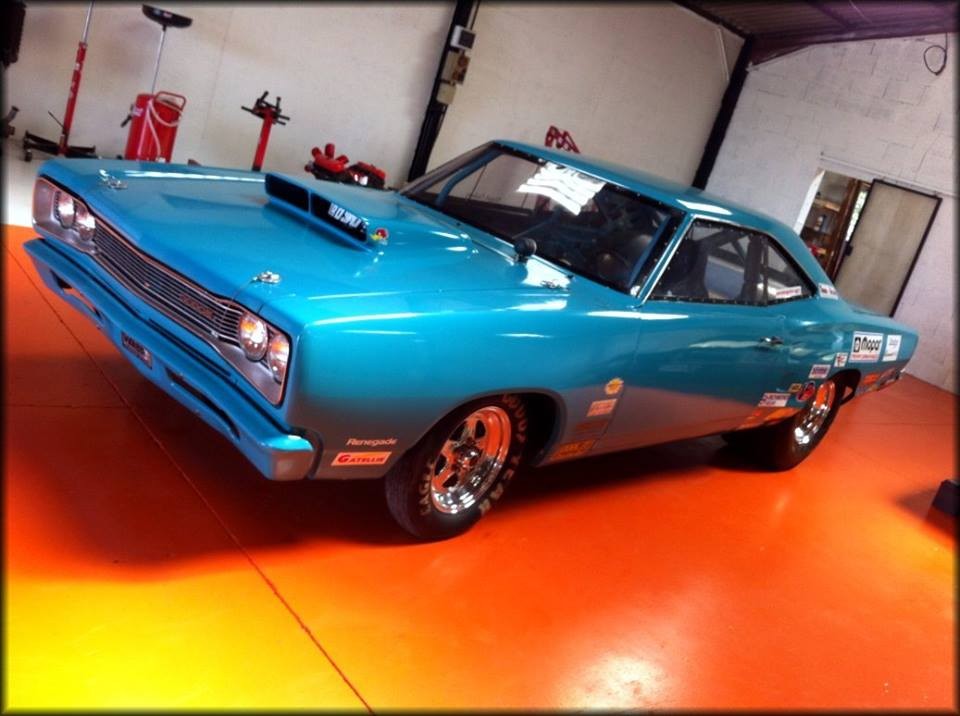 This is one of William’s muscle cars he enjoys airing-out at the drag strip. A big-block powered ’68 Dodge Coronet. 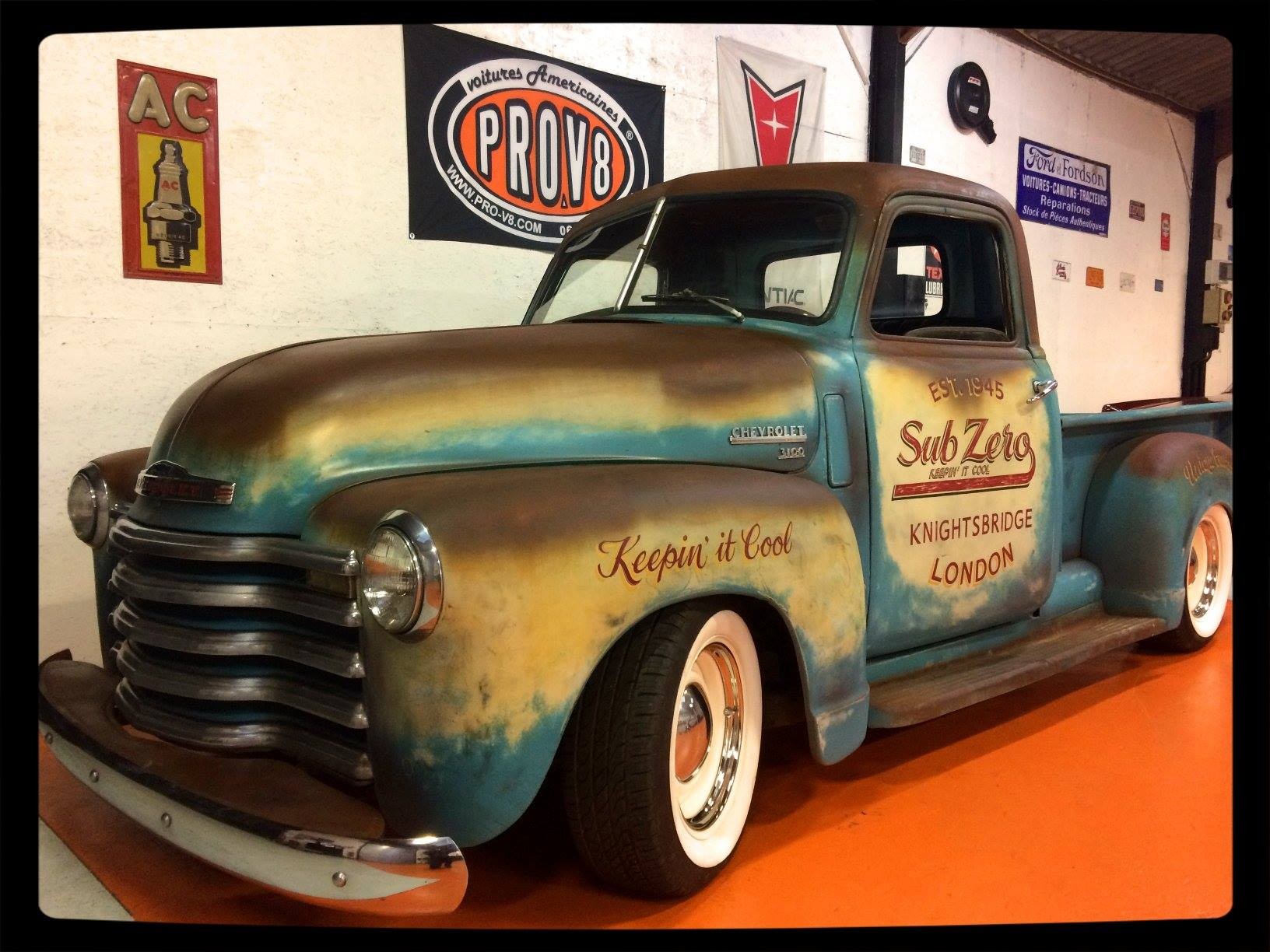 Keepin’ it cool in a vintage Chevy truck with plenty of patina. 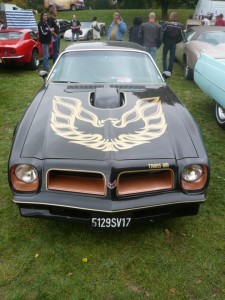 A black and gold, Special Edition ’76 Trans Am at a local American muscle car show in France.

“I specialize in rebuilding the (in)famous Quadrajet carborator (I’m working with Cliff Ruggles for parts).  However, I do rebuild other carbs too as needed, especially for 1950’s to 1980’s cars.  I am currently building four Pontiac engines for my customers now.  Two will be stroked and two stock 400s, I have been restoring American cars and engines for my customers, for many years now.  I’ve done some drag racing too, in small classes with my ‘69 Firebird, with my Dodge Ram SRT10, and with a ‘69 Dodge Coronet.” 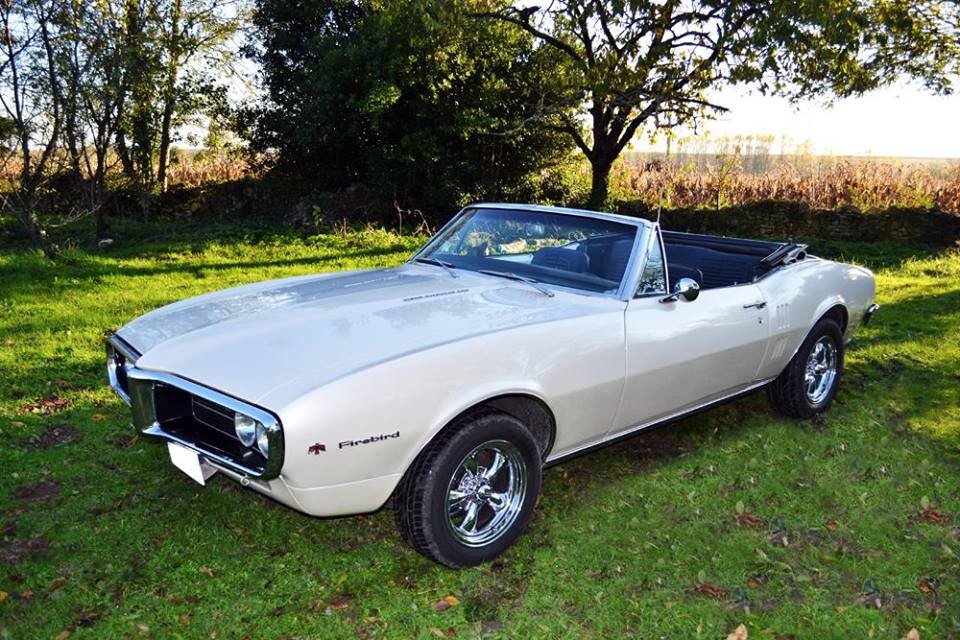 A better look at one of the Pontiac jewels in the area, the ’67 overhead cam six convertible, seen above.

On September, 20th last year, I organized a small Pontiac vehicle owner’s meeting in my shop. We saw other “GM France” vehicles, and this beautiful 1967 Firebird convertible with OHC 6 cyl engine. We spoke with Jules to get the scoop on all of the beautiful ‘birds in his family. 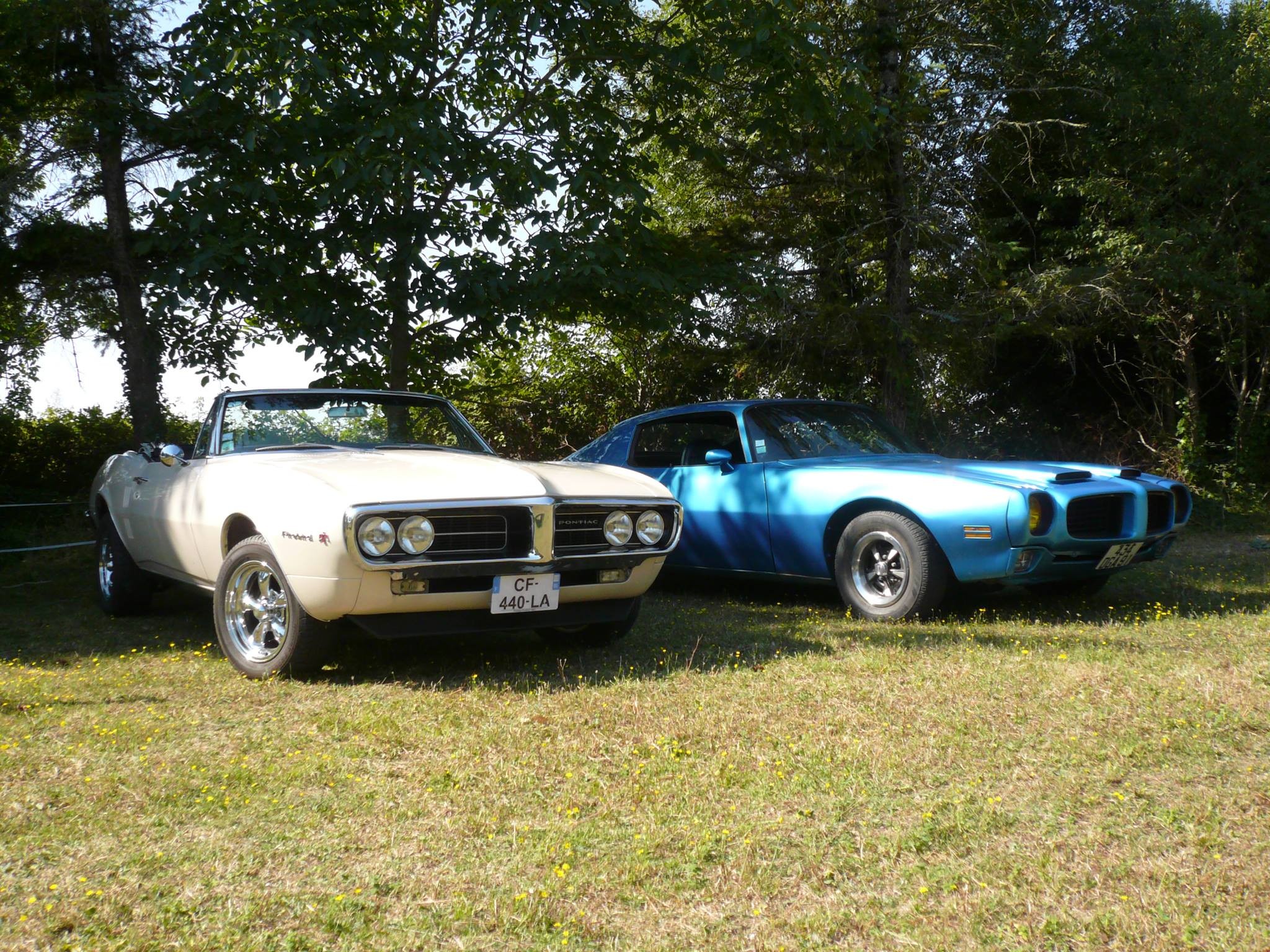 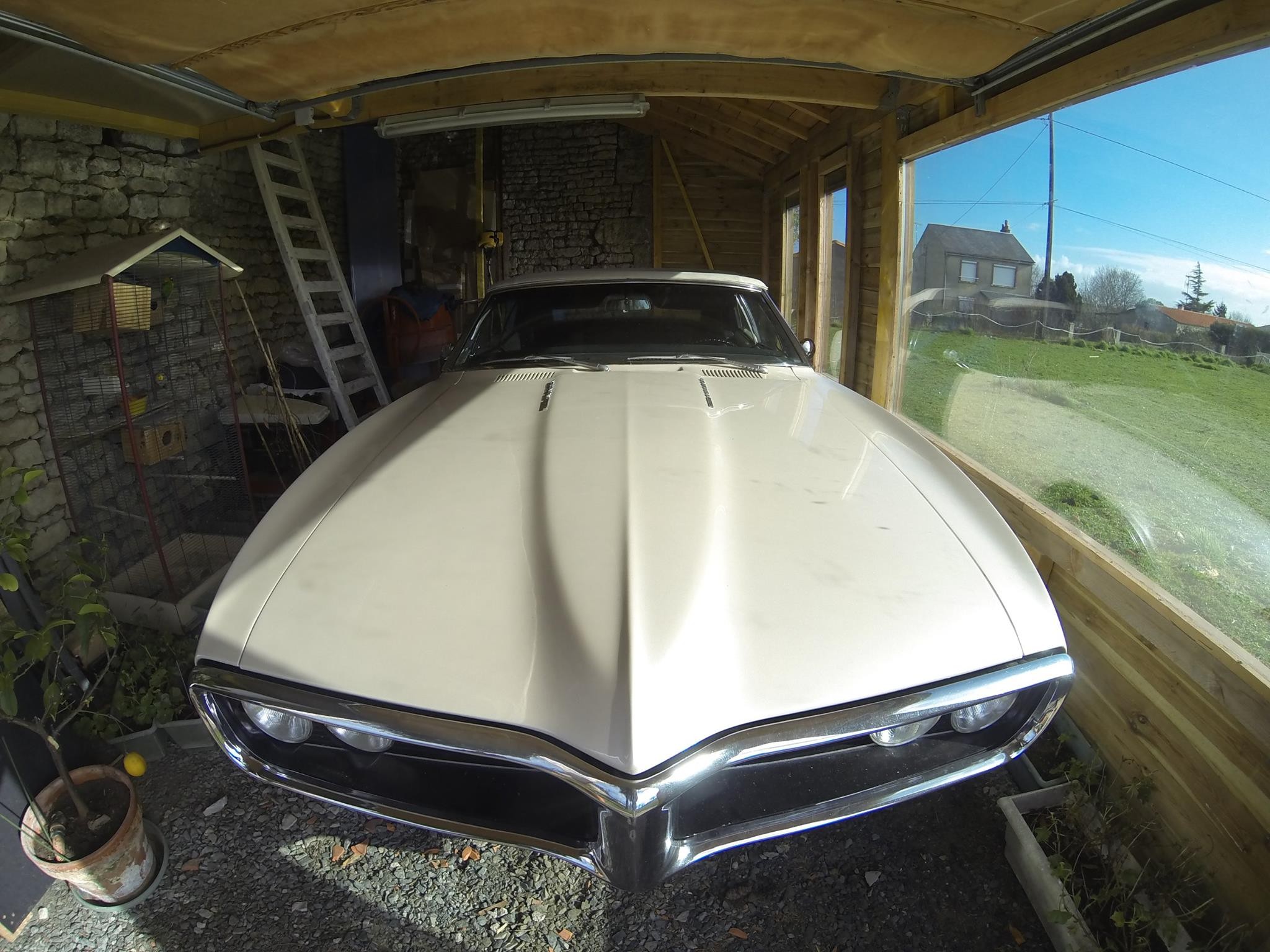 Ready to come out and play! There’s just some kind of irony keeping a bird cage next to a Firebird, don’t you think? 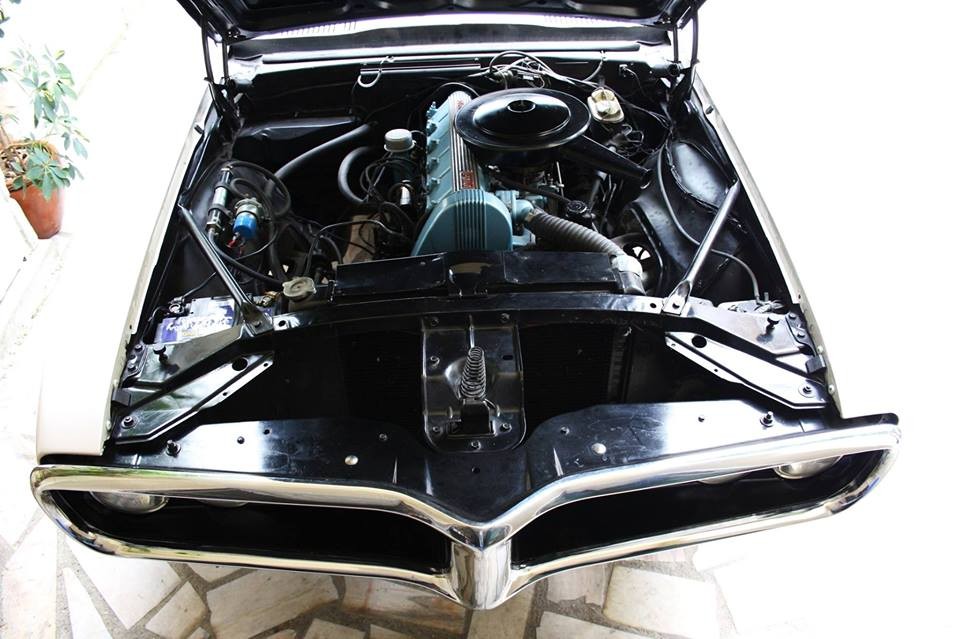 The simple beauty of John Delorian’s dream for the Firebird. Great handling with a lighter weight, but potent OHC six. 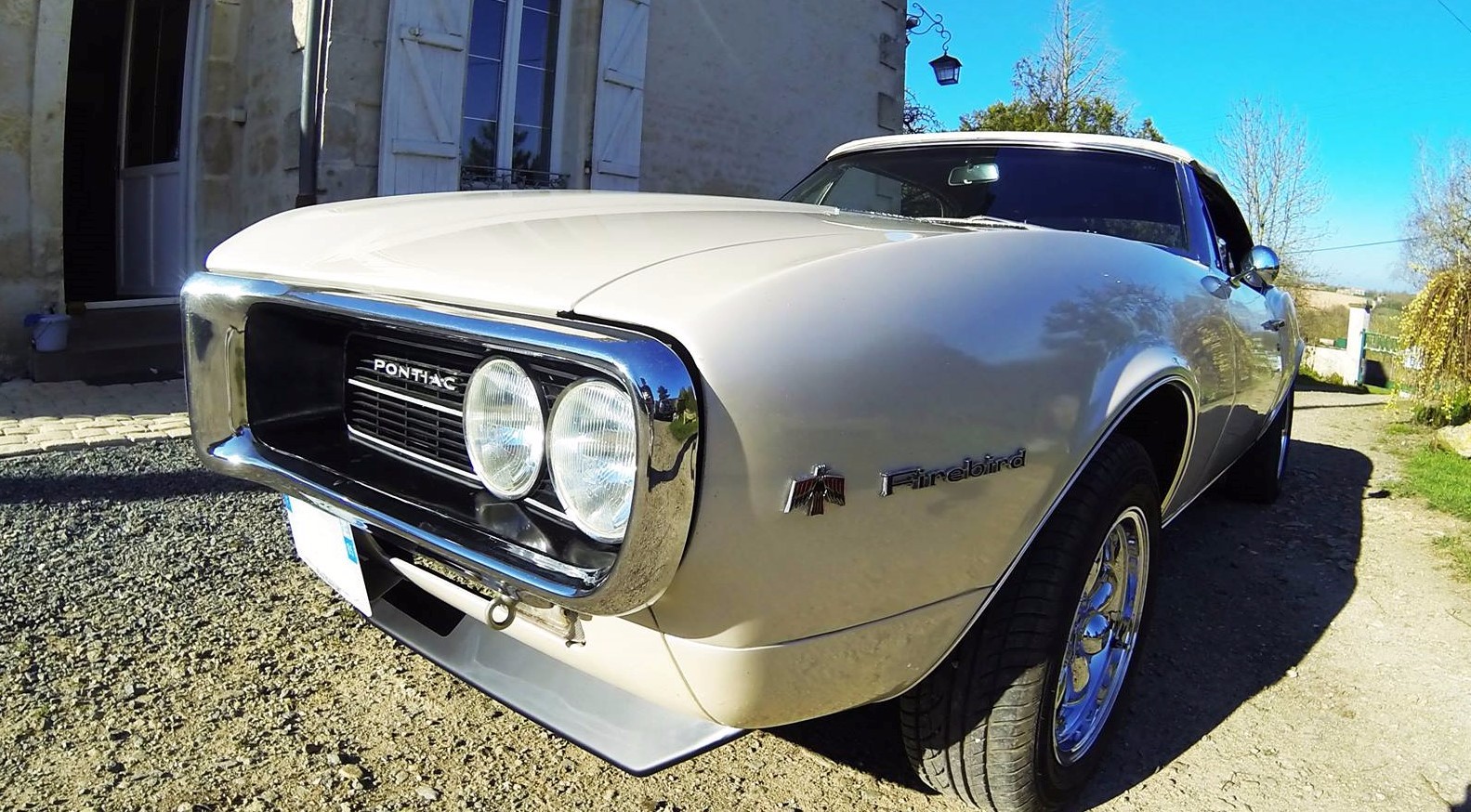 The classic lines of the ’67 Firebird, as seen with a fish-eye lensed, Go-Pro.

“This is my Father’s 230 cubic inch OHC 6 cyl Firebird. It’s a 1967 convertible, with 62,000 km/h (about 38,500 original miles) on it. It is wonderful for we American car enthusiasts here in France, because William is a specialist with Pontiac cars and engines, and his shop is not far from me. 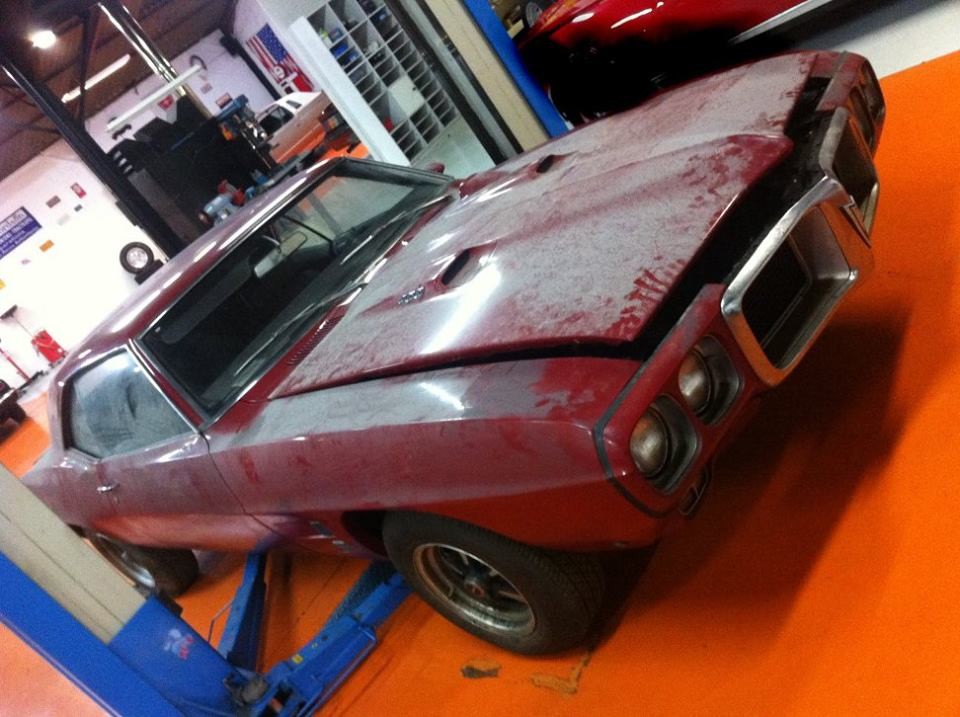 When they rescued this ’69 Firebird, it had water damage up to the top of it’s fenders. The restoration was almost complete, then the river next to where it was stored, overflowed it’s banks. 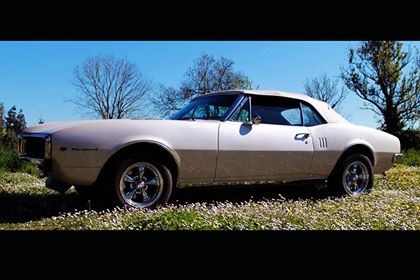 Jules told us:  “He found it in Paris in 2012 and it has never been restored, except a new pearl paint.  He is the third owner of this vehicle.”  His dad loves these American muscle cars, and had a 1967 Camaro back in 1986, which Jules is now restoring. 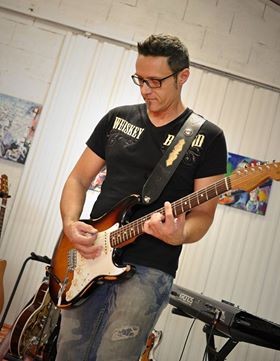 Playing a guitar in his blues and rock ‘n roll band, is another passion for WIlliam, having fun with fast cars and making great music to entertain his guests. Hot cars and serious music! Check out the Marshall stacks next to this 1970 Formula, 4-speed.  With someone like William keeping the global Pontiac spirit alive, I would say the American car enthusiasts in Paris are doing just fine!

(Story by Ken Pitcher.  Pictures by William Ribiere, Jules Joubert and the GM Archive, from the GM Heritage Center.)