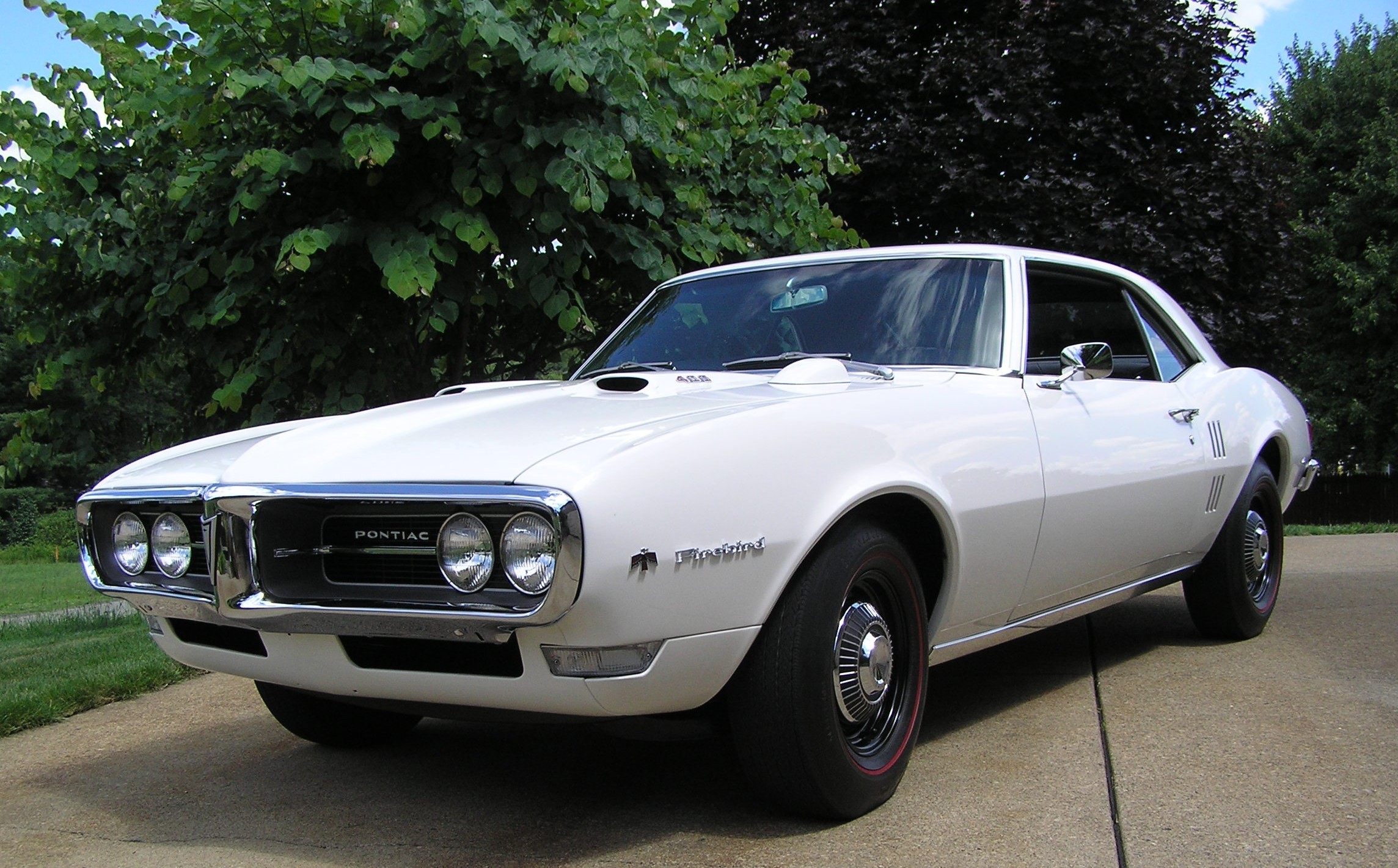 I first met Jim Mino at the Muscle Car & Corvette Nationals in Rosemont Illinois in 2016. Jim is a quiet, soft-spoken guy that you could easily pass by in this world of flashy people that demand attention. I really should have taken more time to talk with him, not realizing the decades of experience he has racing and loving first gen Ram Air Firebirds. I think his ’68 Cameo Ivory Firebird is a little like that too, easy to overlook – but that would really be your loss. 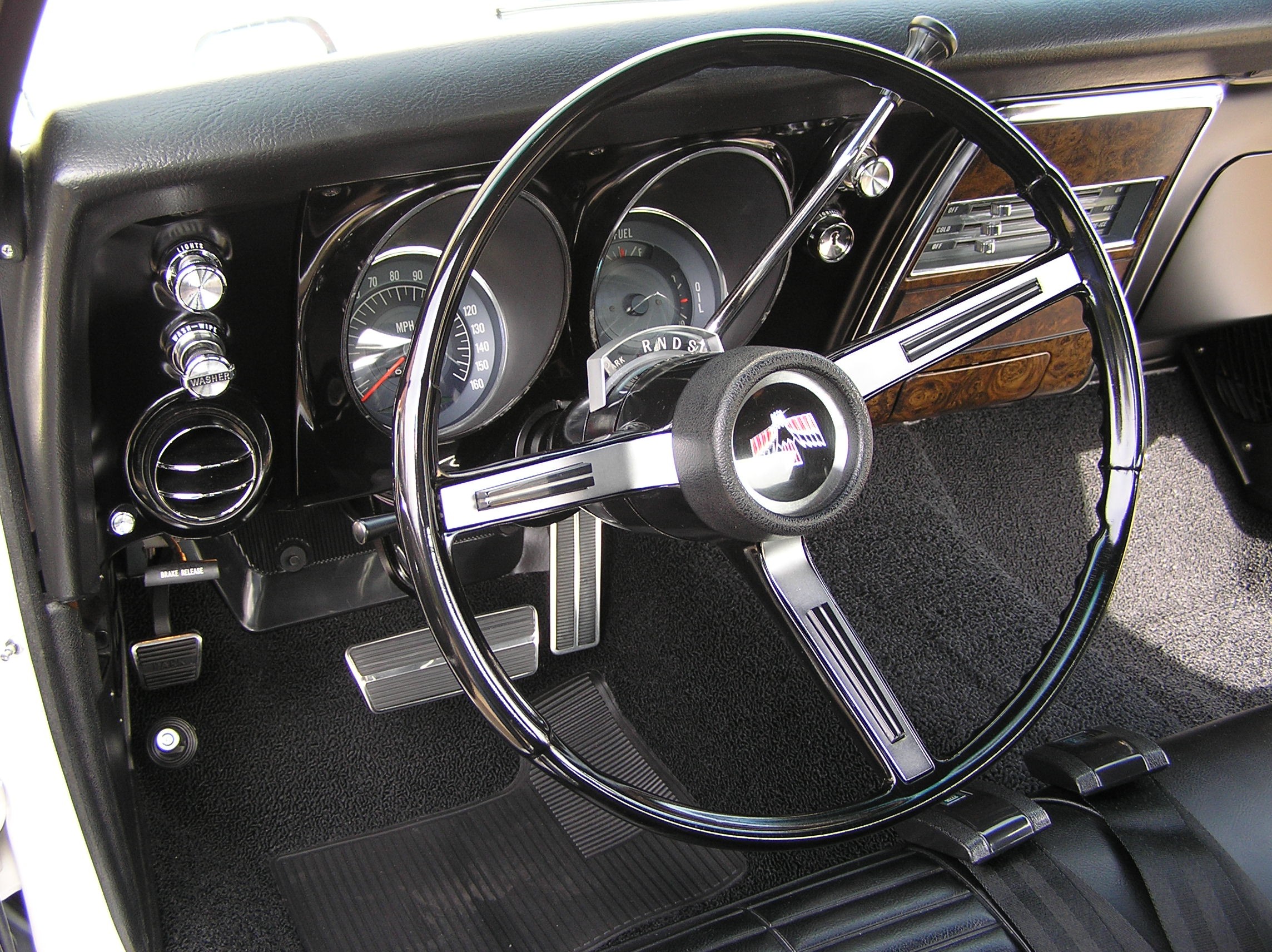 Column Shift and radio delete – what kind of a plain Firebird is this anyway? 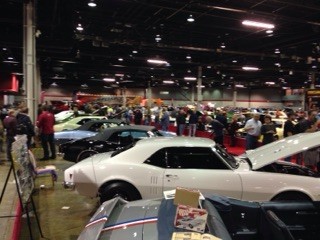 The Muscle Car and Corvette Nationals in Rosemont Illinois in 2017. This very significant Firebird was easily overlooked sitting next to the Super Teen Firebird and two Ram Air Convertibles.

In fact, I made that mistake the first time I walked by this plain-looking Firebird at the MCACN show in November, when I excitedly was spending more time looking at all the unbelievable first gen Firebirds that were gathered for the 50th anniversary of the GM F-body display. I’m talking about the most significant and rare first gen Firebirds ever produced, all gathered in one place. The first Trans Am ever produced, the only red, white and blue ’69 Trans Am produced, Ram Air I, II & IV convertibles – cars I have known about but never seen in person – I mean, I was like a kid in a candy store! All the while this plain white, column-shift, bench seat Firebird with poverty hub-caps was just quietly sitting there, with just a little sign announcing its true historical significance. This is the very first Ram Air II Firebird ever produced. 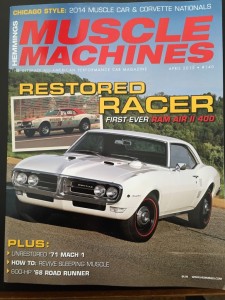 Flawless and correct in every detail, it was the cover car featured in the April 2015 issue of Hemmings “Muscle Machines” magazine.

Extremely rare, it is one of only 12 equipped with automatic transmission of the 110 Ram Air II Firebird’s built in 1968. PHS documented as the FIRST Ram Air II Firebird produced, and the only one invoiced on May 20, 1968, first day of production. 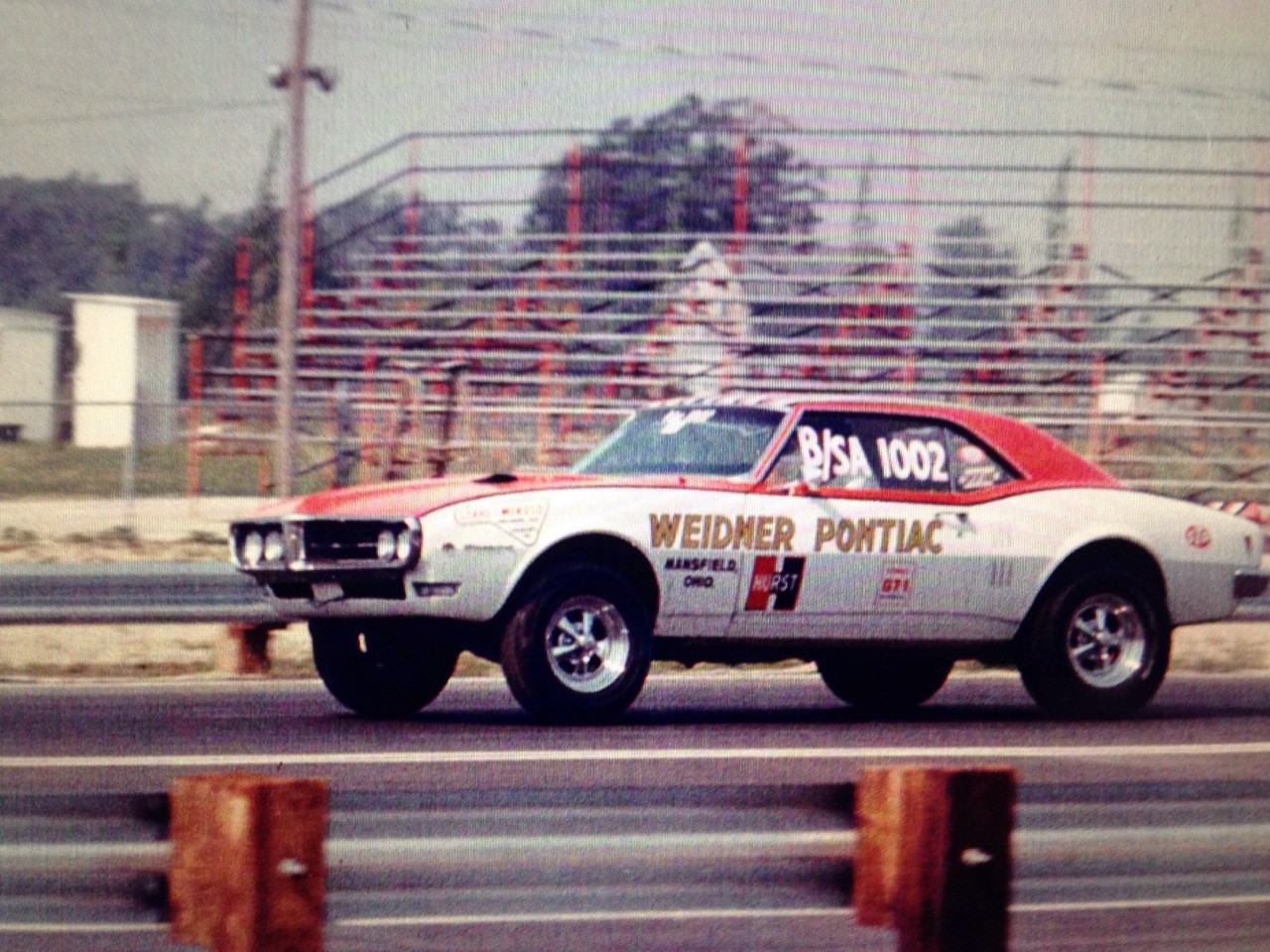 Special ordered by Weidner Pontiac in Mansfield, Ohio and campaigned by the dealership owner’s son, Pete Weidner Jr. in NHRA’s B/Stock Automatic class during the 1968 drag racing season.  It was raced for only one season.

When I asked Jim if I could do a story about his car for our website, he told me; “A few years ago while searching through on-line ads, I found the Firebird in North Carolina where it had been stored for over seven years. It was advertised as a ’68 Firebird 400, formerly a drag racing car that needed restoration. A request for more information and pictures showed the car to be in good overall condition and a deal was made to purchase. A copy of the billing history was obtained from PHS and it verified the car was an original Ram Air II Firebird, a rare find indeed!”

Jim has raced Ram Air Firebirds for decades, in fact Pontiac author, Rocky Rotella included him and his Autumn Bronze ’68 RAII Firebird on pages 84 & 85 of his 2016 book: “The Definitive Firebird & Trans Am Guide 1967 to 1969” 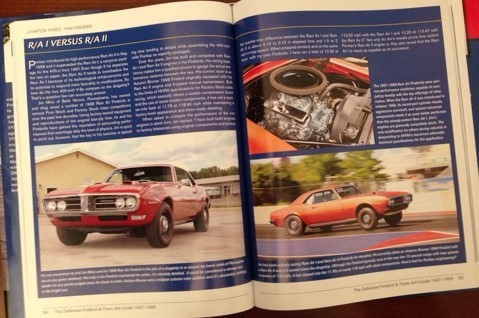 By the way, if you don’t have this book, I highly recommend getting it, as it is the most complete book on first gen Firebirds ever written. 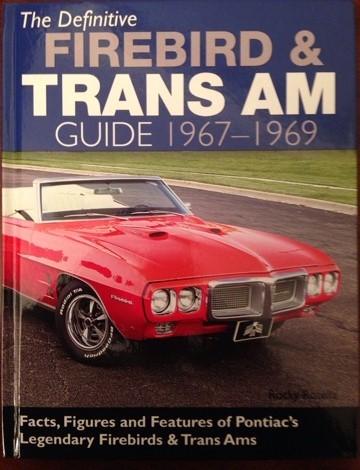 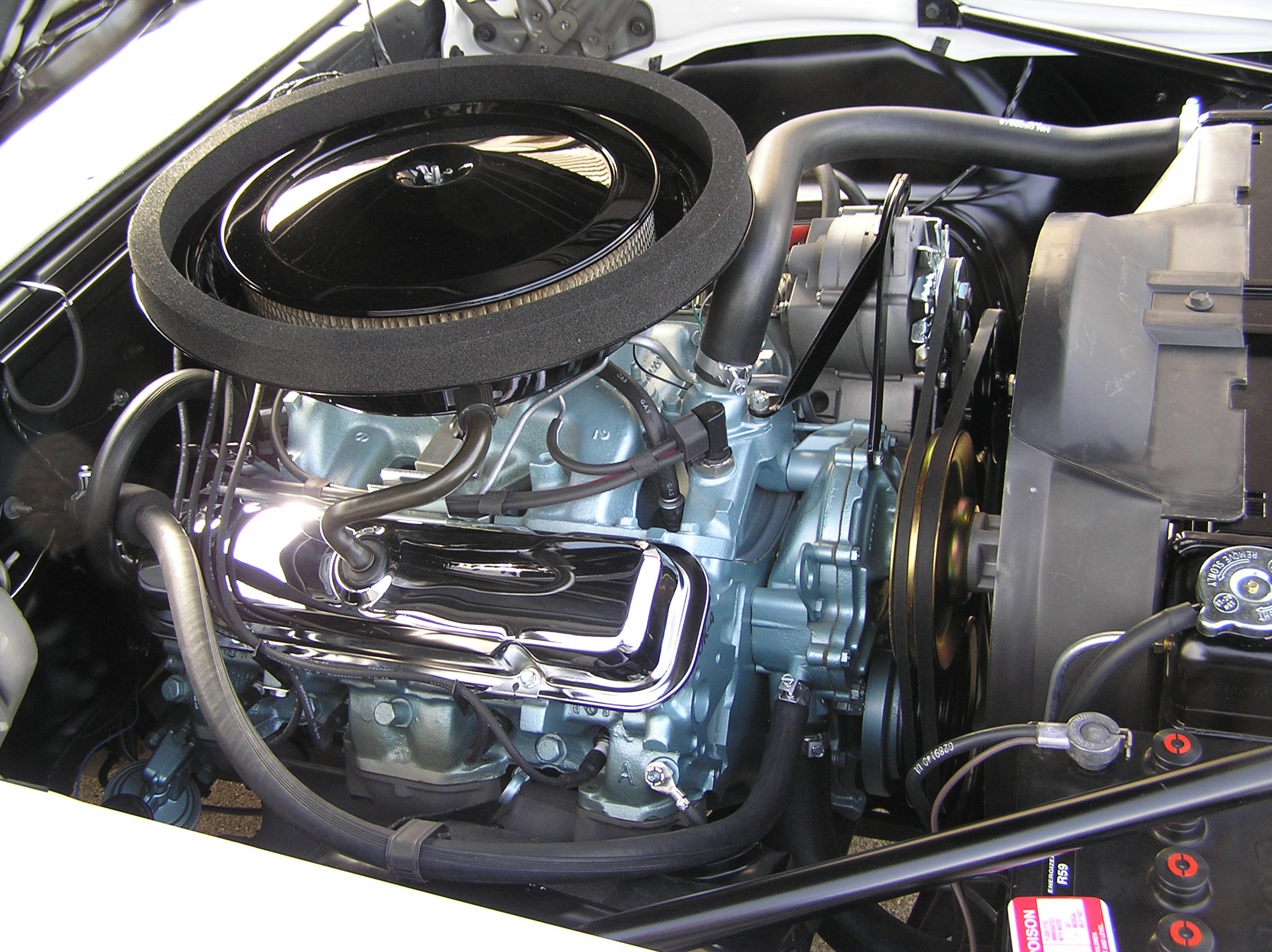 To complete the drivetrain, I obtained a correct ’68 PQ code Turbo Hydramatic transmission and from my spare parts collection a ’68 10-bolt “Saf-T-Track” limited-slip heavy-duty “N” (nodular iron) rear axle assembly with original GM 3.90 gears. A special effort was made to provide all “numbers and date code correct” parts and little-known items indigenous for a Ram Air Firebird, such as the 4-blade cooling fan and 2-piece speedometer cable. Other hard-to-find items like a rare Ram Air II #7028270 Quadrajet carburetor and #1111941 distributor were located along with an original hood tachometer. After sourcing out the remaining parts need for the restoration, I rebuilt the engine to factory specifications.” 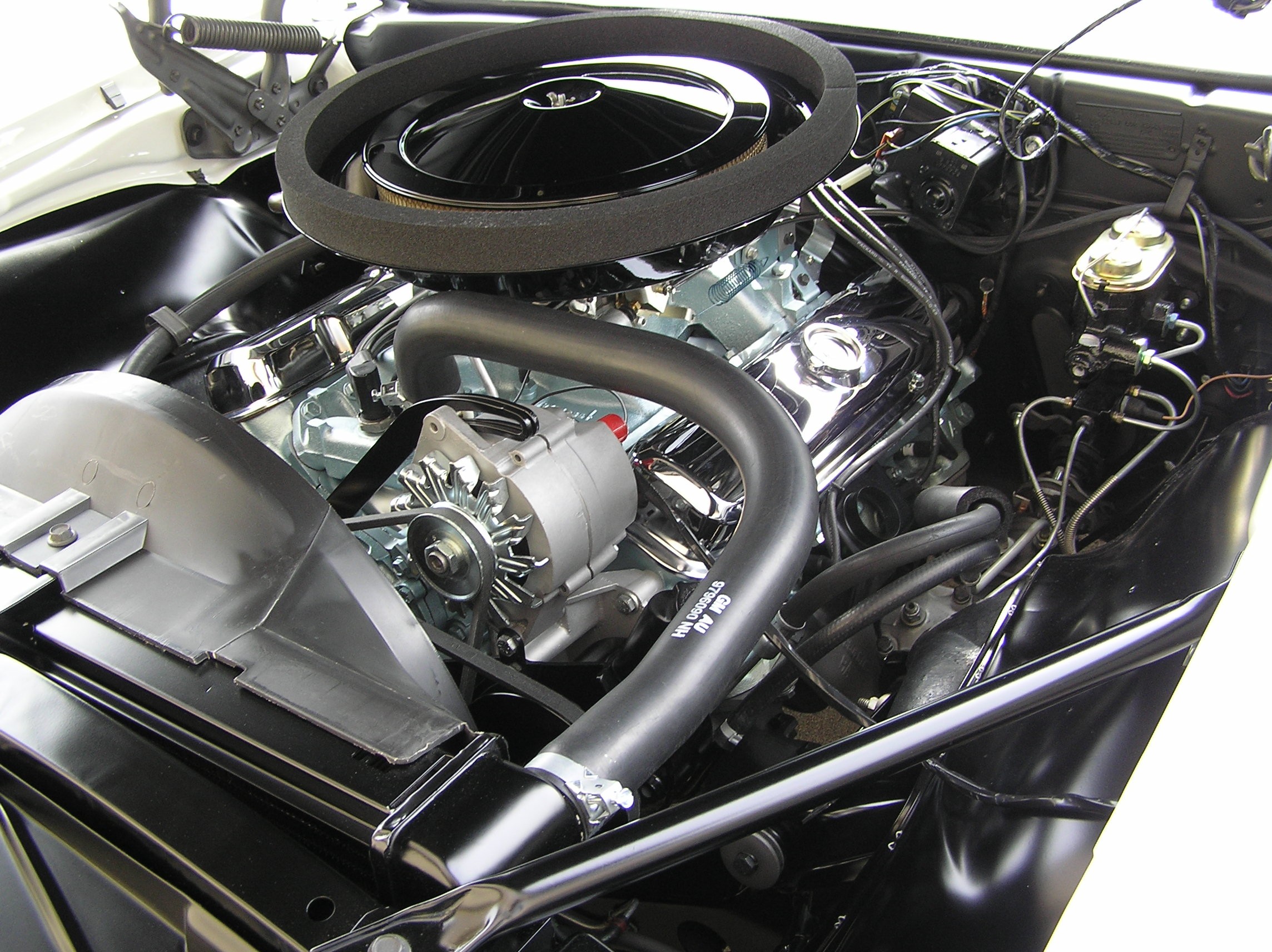 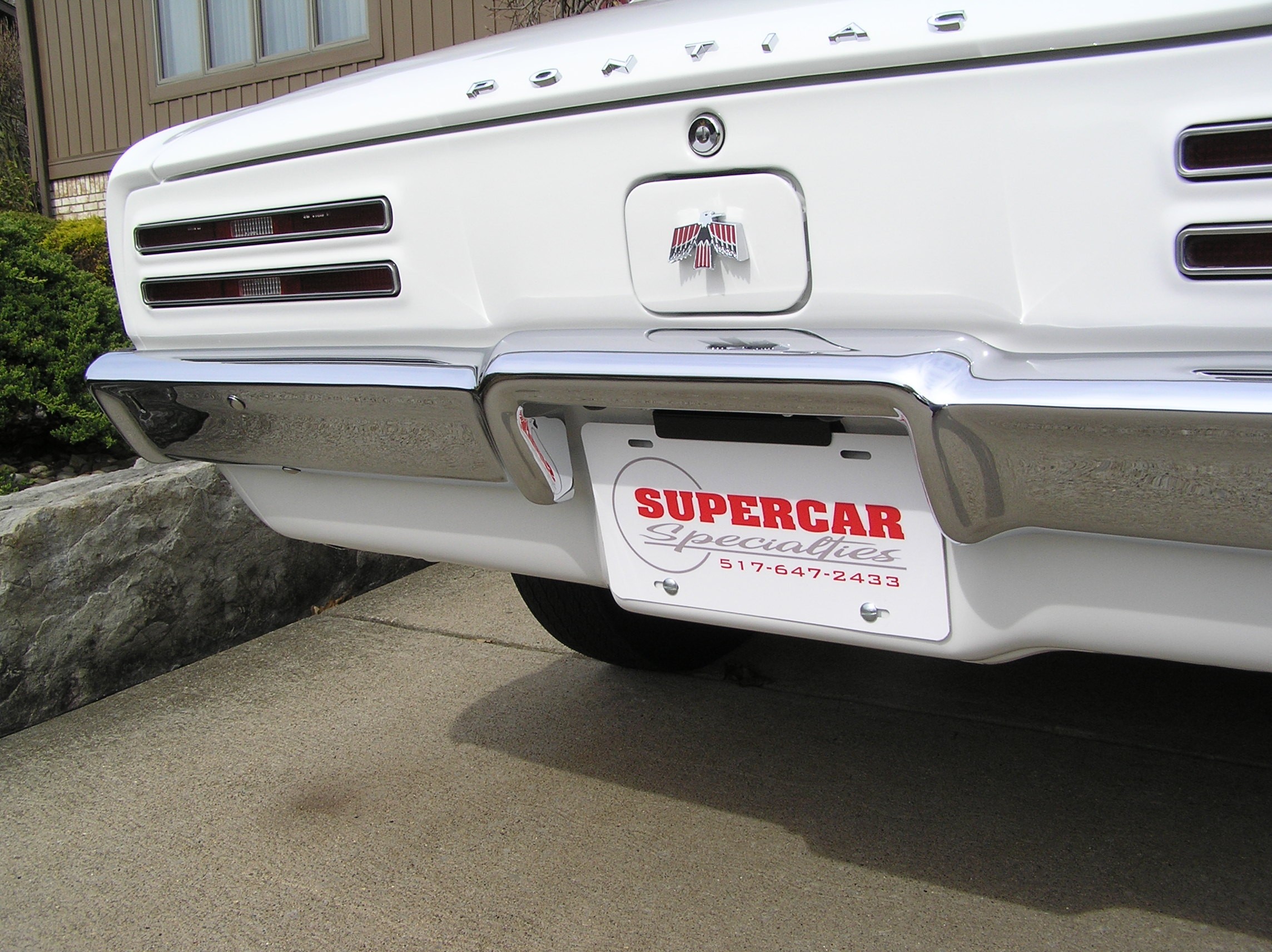 The rotisserie restoration by Scott Tiemann’s Supercar Specialties in Portland, Michigan was completed in December 2013. Certainly, one of the best examples of this ultra-rare muscle car and a genuine piece of Pontiac history!

“In mid-December 2011 the Firebird was delivered to Scott Tiemann’s Supercar Specialties shop in Portland, Michigan for a total frame-off rotisserie restoration, the car had only minimal rust confined to the rear wheel openings and lower extremities in the usual areas. The body was media blasted and repairs were capably handled as outstanding metalwork and incredible attention to detail are the forte of Tiemann’s crew. After the bodywork was completed the car was refinished with PPG Daltron 2-stage (base/clear coat) in original color Cameo Ivory paint.” 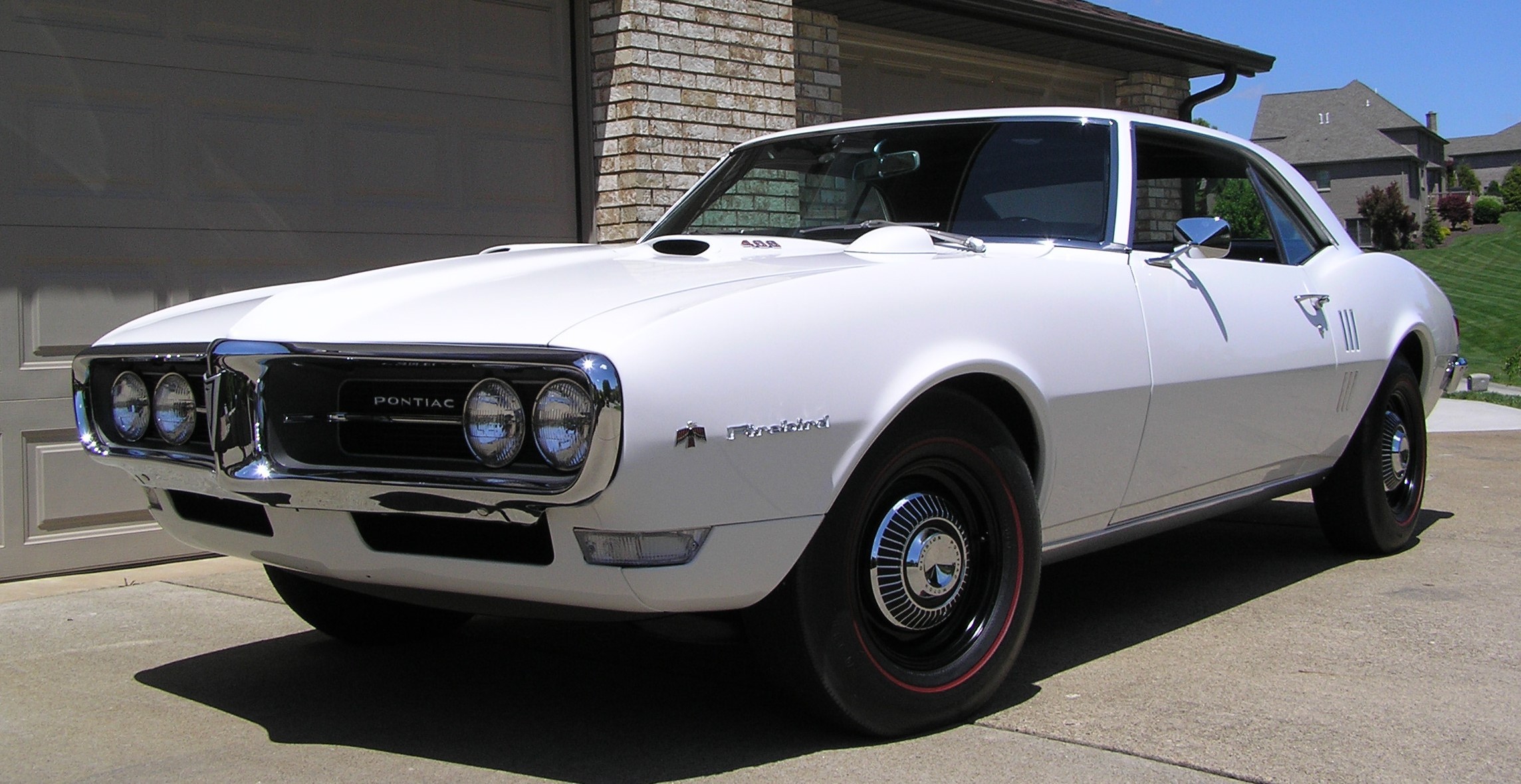 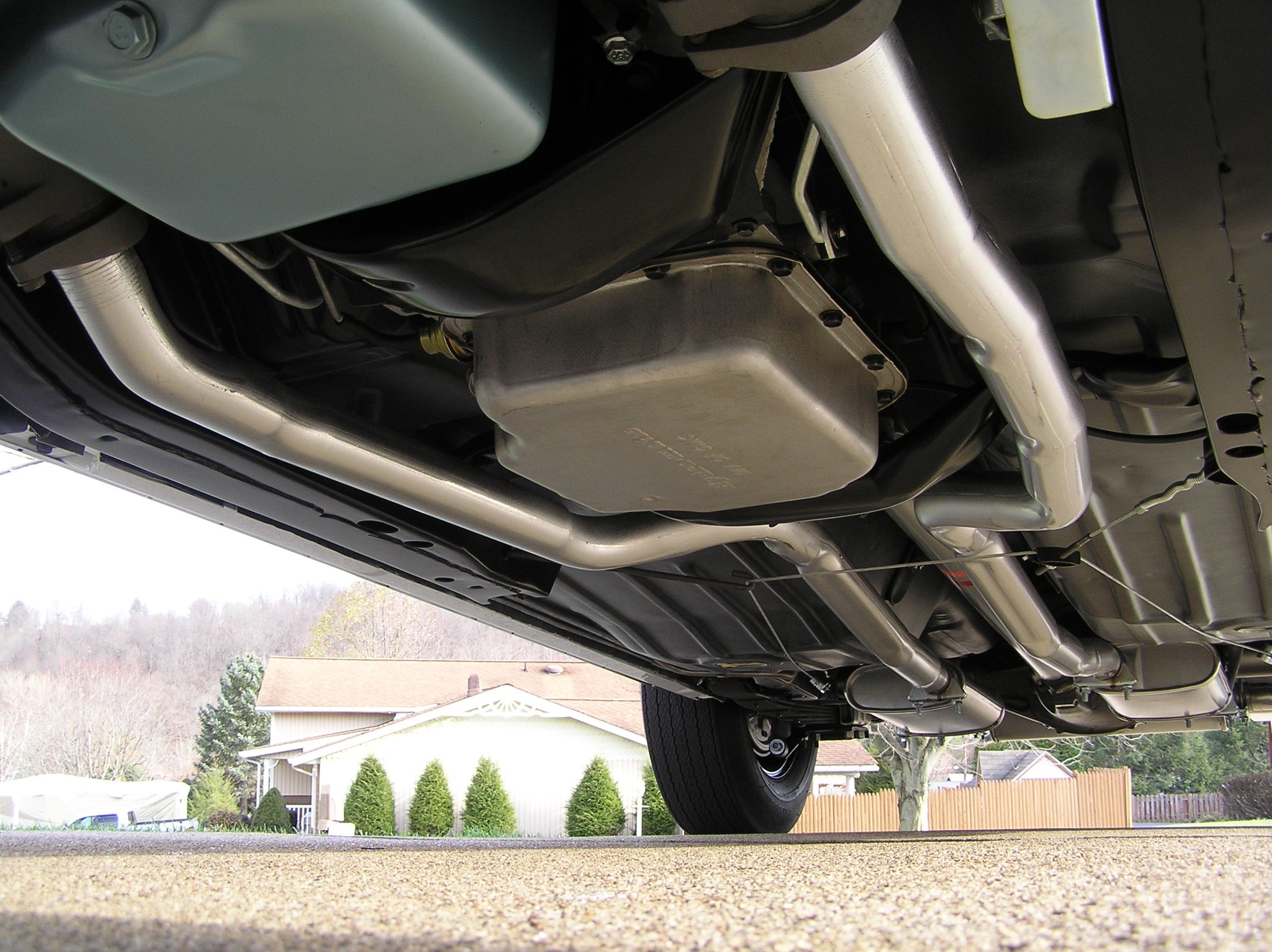 “The original seats, door panels and dash pad still in excellent condition were carefully cleaned and detailed. New headliner, carpet, package shelf and all seals and new interior trim installed. The dash, steering column, shift linkage, heater and original seat belts were restored to as-new condition to finish the interior. The restoration took approximately 23 months to complete and the car was delivered back to Pennsylvania in late November 2013 in stunning concours quality condition and correct in every detail. This car is certainly one of the best examples of this ultra-rare muscle car and a genuine piece of Pontiac history!” 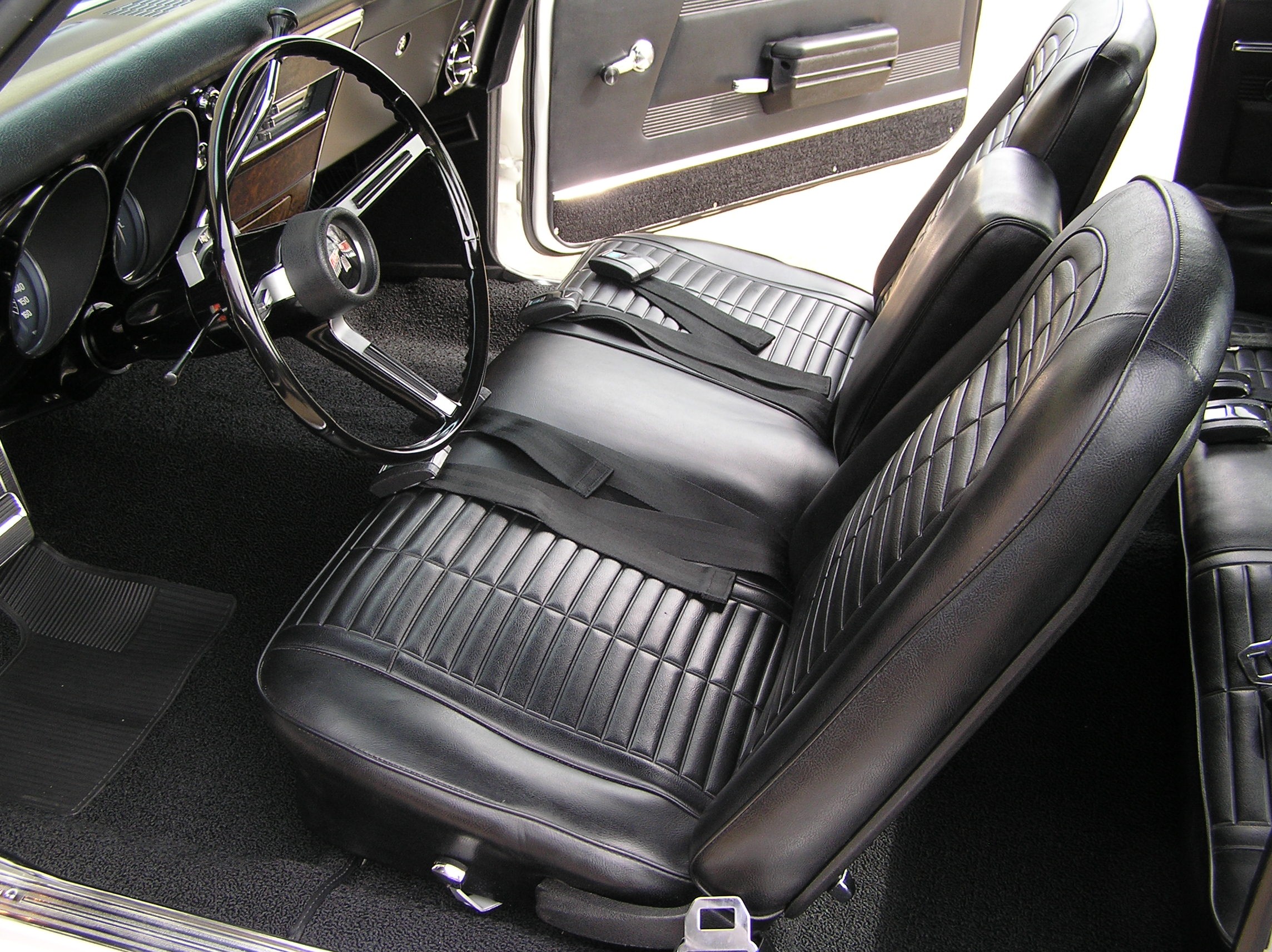 The bench seat is a rare option when ordering a Firebird, but hardcore racers knew it would shave about 40 pounds off the total weight, making the car lighter. 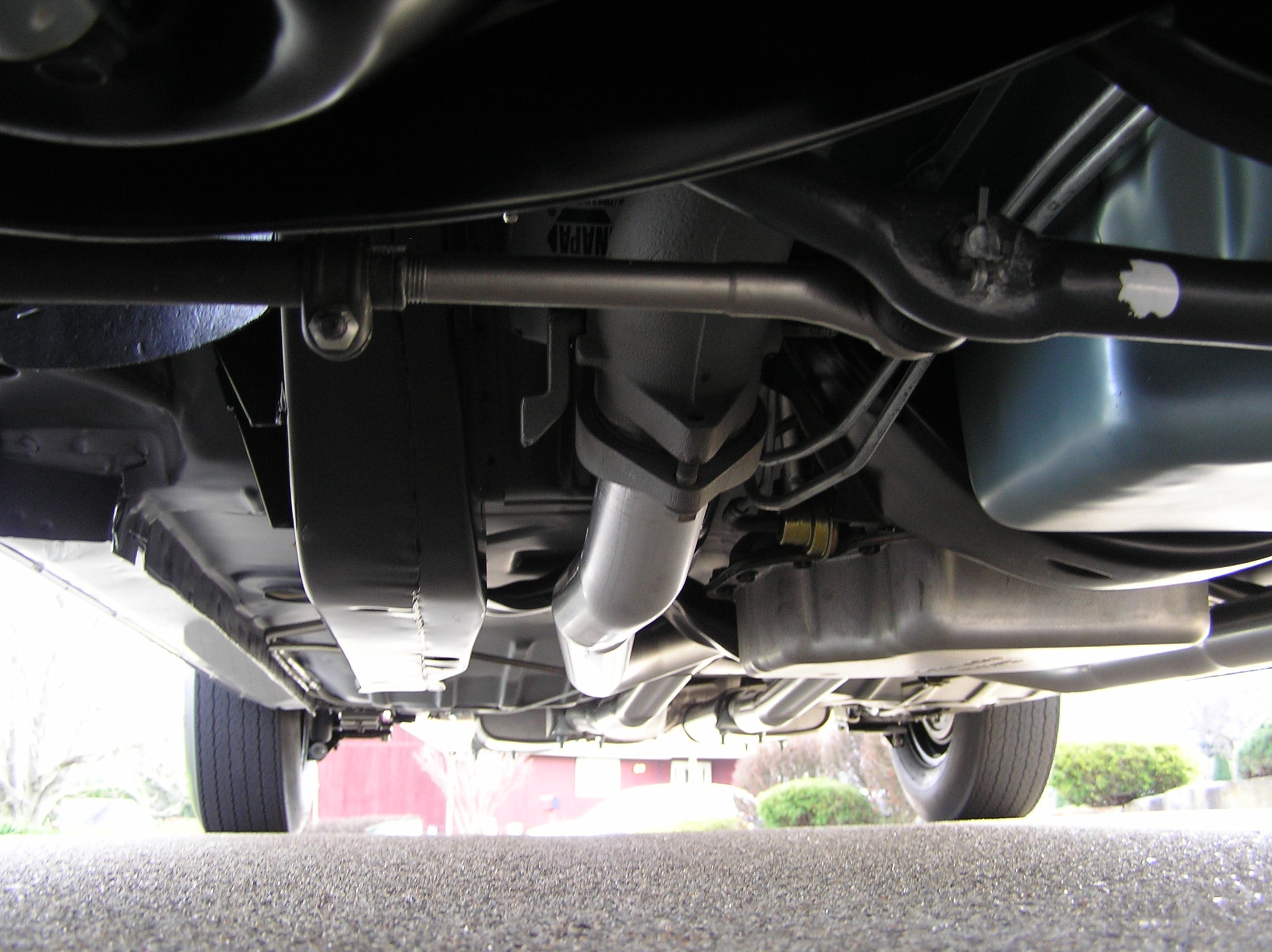 Clean and perfect from any angle – the results of a Scott Teimann’s restoration.

A History of the Ram Air II Firebirds
On May 16, 1968. the sales promotion manager at Pontiac Motor Division issued a memo proclaiming, “To meet the demand for maximum performance, Pontiac Engineering has developed an all new Ram Air Engine Option. It is designated Ram Air II and replaces the original Ram Air Option. The Ram Air II Option is designed to provide the ultimate in action packed performance”. 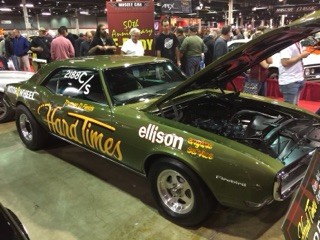 Although the Hard Times racing Firebird was not a Ram Air II ‘bird, but a Ram Air I, it also has the bench seat for less weight.

Originally developed to be released in 1969, the RAII’s primary purpose was to give Pontiac a competitive entry in NHRA drag race competition. Always a formidable competitor, a Ram Air II Firebird held the NHRA National Record in the heavily contested B/Stock class for three years in a row in the mid 1970’s and won the overall Stock Eliminator crown at the NHRA U.S. Nationals in 1977! Still competitive today, a 1968 Ram Air II Firebird C/Stock automatic was the number one qualifier for Stock Eliminator at the 2014 NHRA Winternationals! 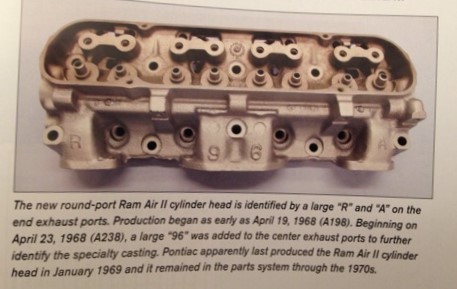 This picture and caption are from “The Definitive Firebird & Trans Am Guide 1967-1969.” 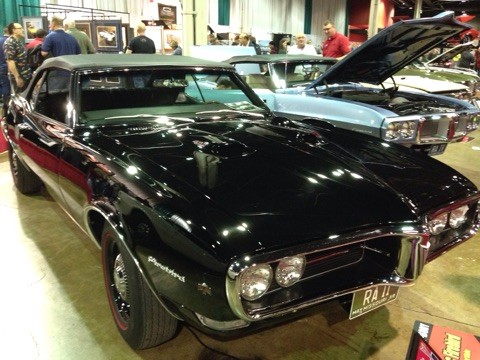 An ultra rare, Ram Air II convertible Firebird at the MCACN show in November. One of only 8 produced, and 4 known to exist!

Horsepower rating for the Ram Air II engine in the Firebird was listed as 340 HP at 5300 RPM although the identical engine in the heavier GTO was rated at 366 HP at 5400 RPM. Both engines were purposely under-rated, supposedly for insurance purposes to maintain a horsepower to weight ratio of 10 to 1. As was the practice on previous Ram Air equipped models, the cars were shipped from the factory with closed non-functional hood scoops and a standard 4-BBL air cleaner installed. The Ram Air Induction components were packaged in the trunk for dealer installation after delivery. 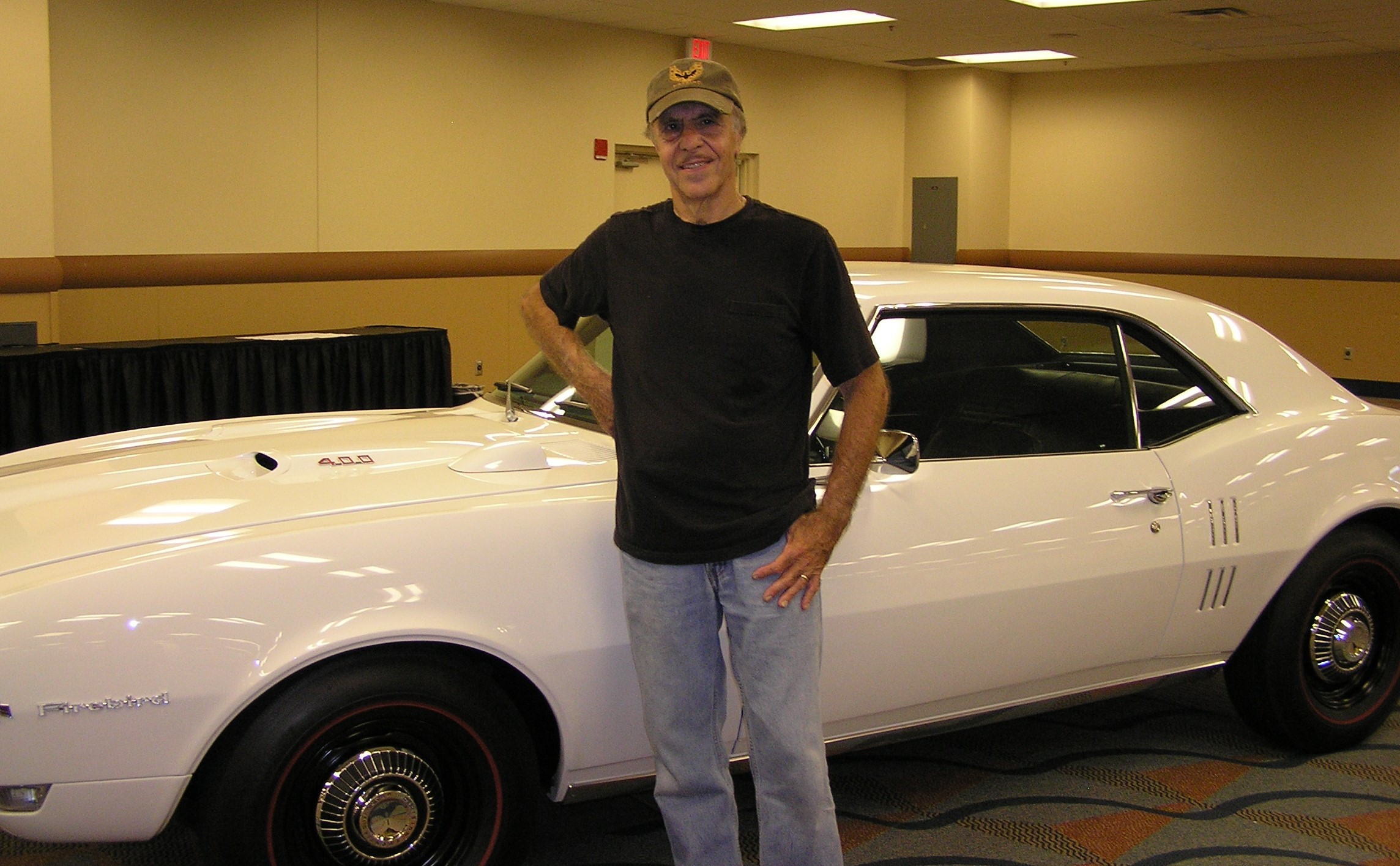 Owner, Jim Mino standing by his pride and joy.

A total of 110 Ram Air II Firebirds were produced in 1968, of which 98 were 4 speeds and 12 equipped with automatic transmission. All were delivered with a heavy-duty nodular iron 3.90 to 1 ratio rear axle. This is the very first Ram Air II Firebird produced on May 20, 1968 – and the reason why this Firebird should never be overlooked.