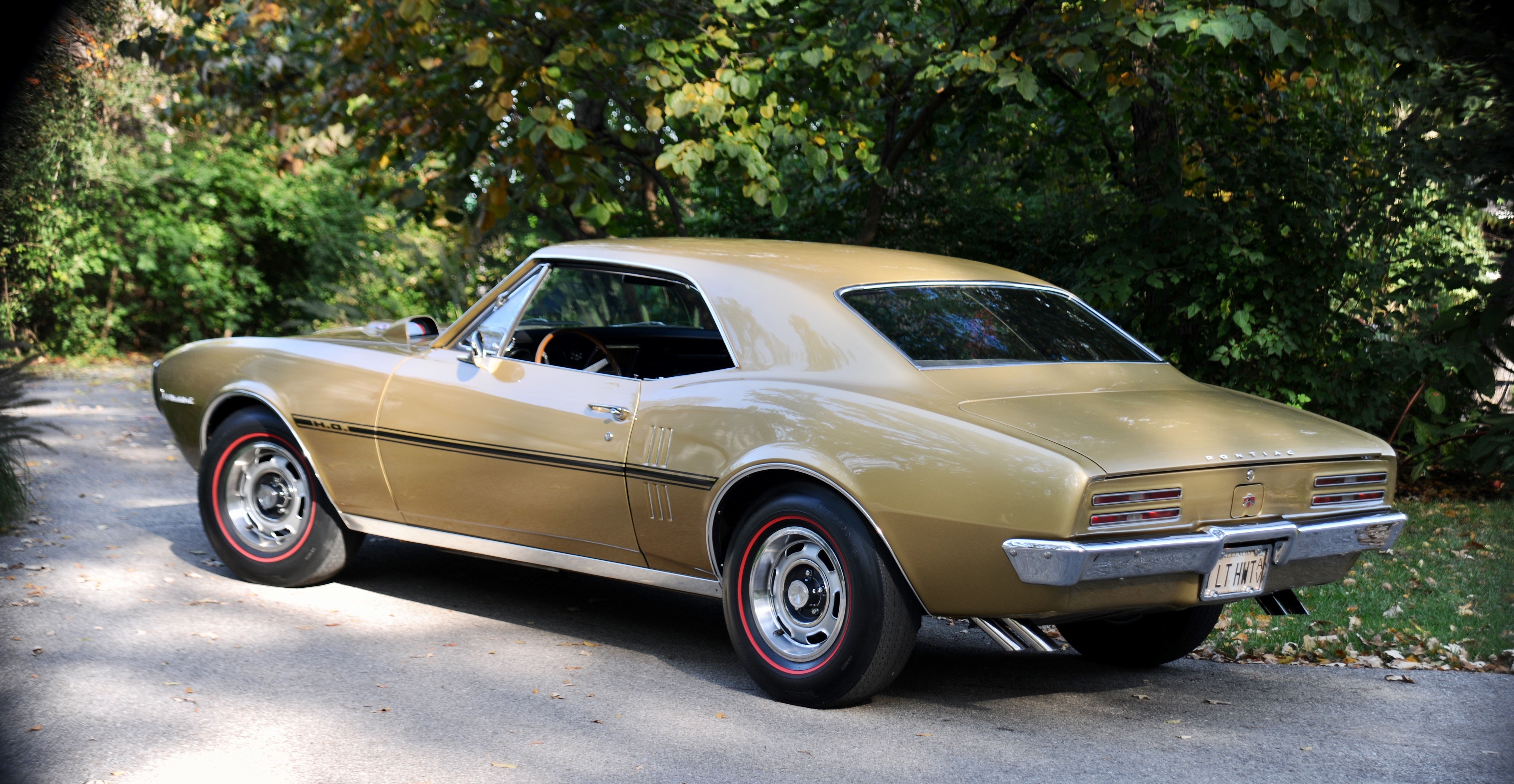 I asked club member, Larry Delay to give us the story behind his beautiful ’67 400 Firebird.  Many of you may know Larry has worked with various Pontiac magazines.  But for those of you who do not, this will give you an idea of what he means to the Pontiac hobby…  Larry told me: “I got my start doing feature stories/shoots in the mid-nineties with Don Keefe’s encouragement while he was editor of “Pontiac Enthusiast.”  I have continued to do free-lance feature stories, etc. for; Barry Kluczyk at “Pontiac Enthusiast,” Tom DeMauro and Christopher Phillip at “High Performance Pontiac,” and for Don Keefe at “Smoke Signals.” 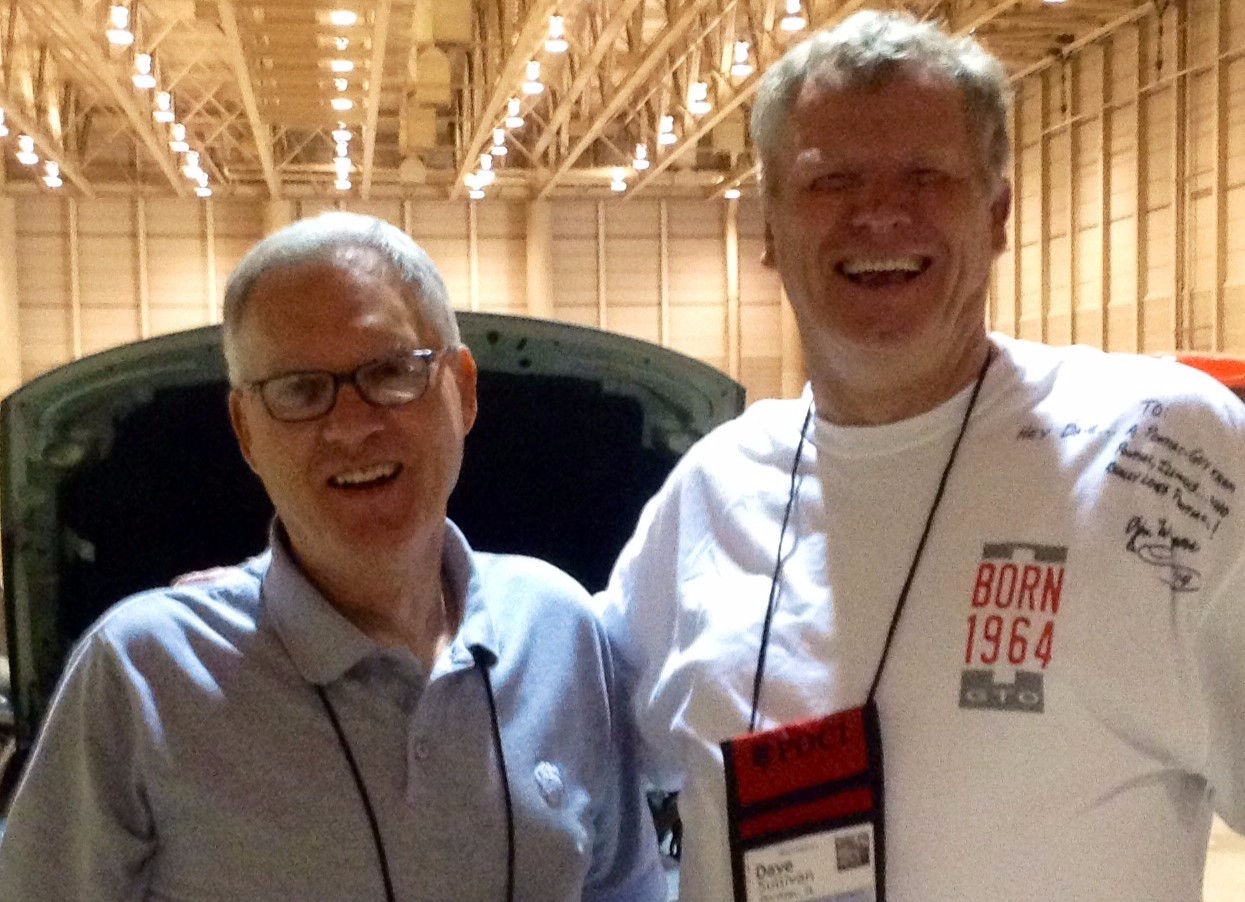 Larry on the left with member Dave Sullivan at the POCI convention in Wichita Kansas in 2014. 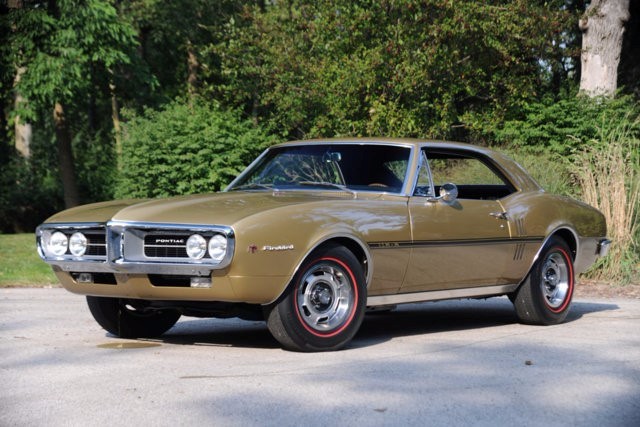 Larry’s Coronado Gold 1967 326 HO Firebird Coupe. I just love the Rally I wheels. Note, this is the restoration before the “400” conversion. 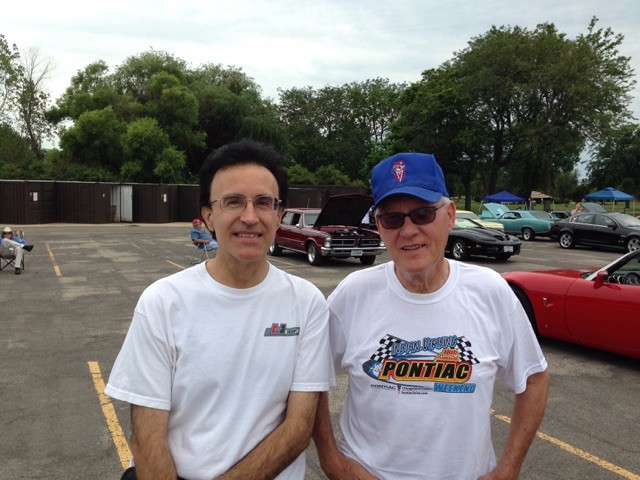 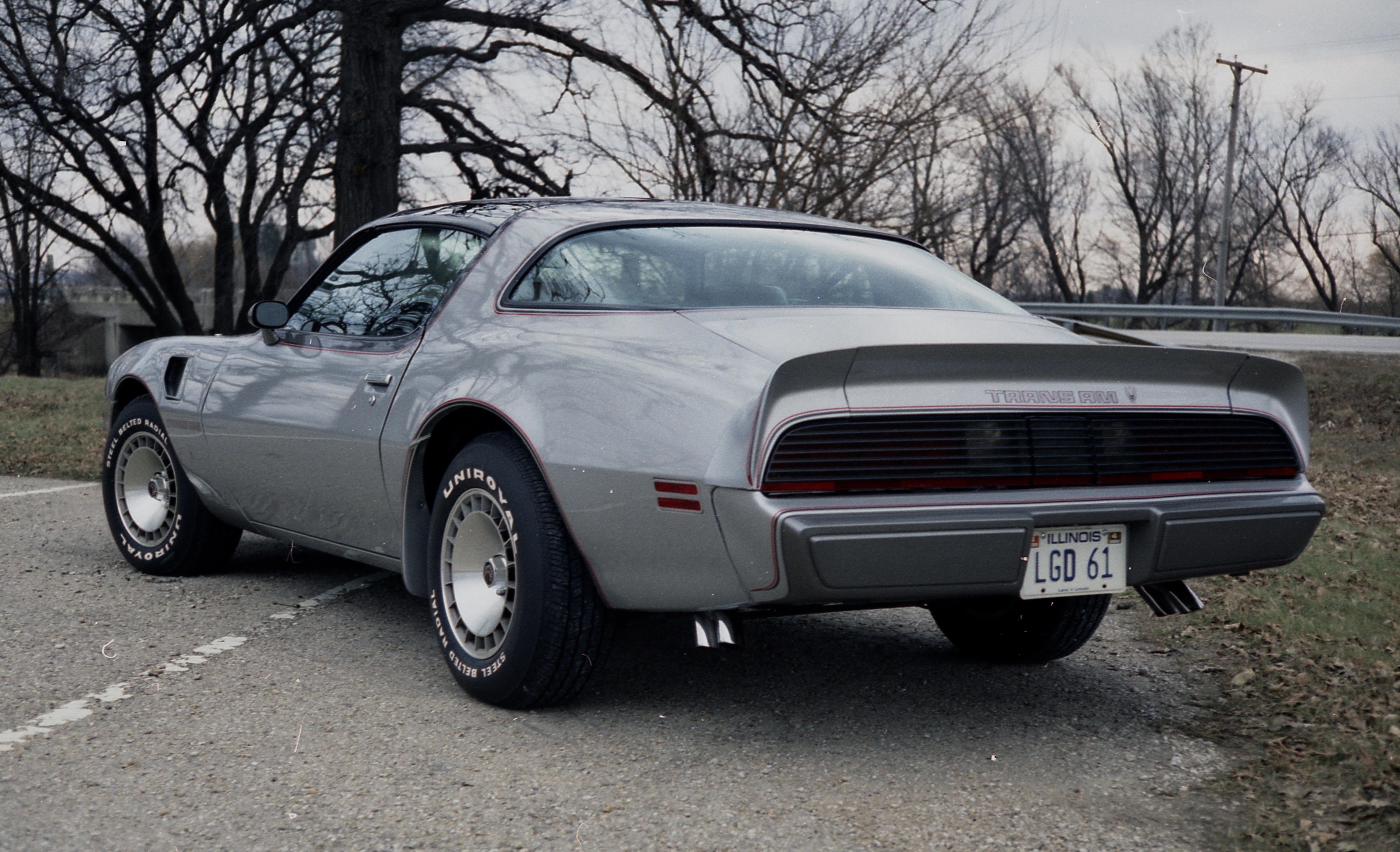 The ’79 10th year Anniversary Trans Am Larry and his family drove to the POCI convention in 1984.

Larry told us, no, Pontiac did not make a 400 HO Firebird in 1967, but we (my son and I) did – in 2014.  And so this is a story about how an original, numbers matching 1967 326 HO became a restored, more or less correct, 400 HO patterned from the combined influence of the ’67 Firebird 400 and using the WS 400 HO motor from a 1967 GTO.  You might say this is a car we “WISH” Pontiac had come to market with in 1967.  The car’s heartbeat, then, is that of an authentic 1967 WS GTO motor.  Its pulse is accentuated by long-branch exhaust manifolds exiting thru a factory-like exhaust system that reminds me of the gurgle my 1970 ½ Ram Air III Trans Am made.  But I am starting at the end of the story.  Let me take you back to the beginning of our 30-year journey and the rebirth of this golden Bird.

Our journey begins at the 1984 POCI Convention in Atlanta, Georgia.  What a special event that was for our family for many reasons.  Our son, Brett, was 16 and just beginning to drive, and of course anxious to own a car – make that a Pontiac!  We were all excited to drive long-distance for the first time in our 1979 10th Anniversary Trans Am and to show it at POCI.  We met my friend, Jeff, at the convention site who quickly discovered that Brett was excited about someday buying a GTO.  It so happened that Jeff had just purchased two 1967 Firebird 326 HO’s, a Regimental Red convertible for himself, and a Coronado Gold (same as Tiger Gold in a GTO) coupe to resell – both from Tennessee.  The two of them spent the rest of the convention week discussing GTO’s and Firebirds.  By the time the show was over Jeff had convinced Brett that the Gold 326 HO was much rarer than any GTO he could afford in the near future – so we arranged to view Jeff’s 326 HO upon returning home. 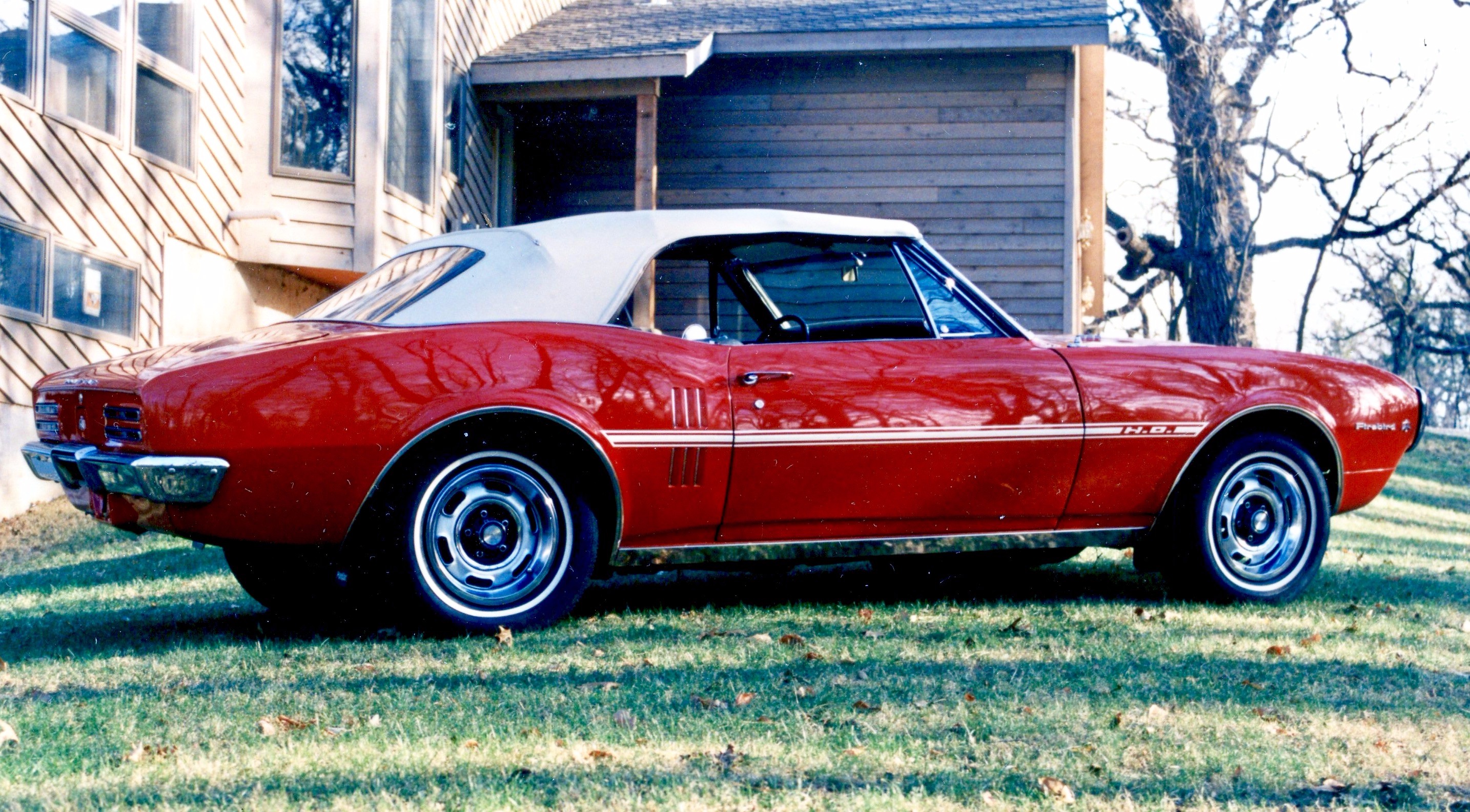 Larry’s friend Jeff, bought two 1967 326 HO Firebirds, and kept this Regimental Red one as his own car. 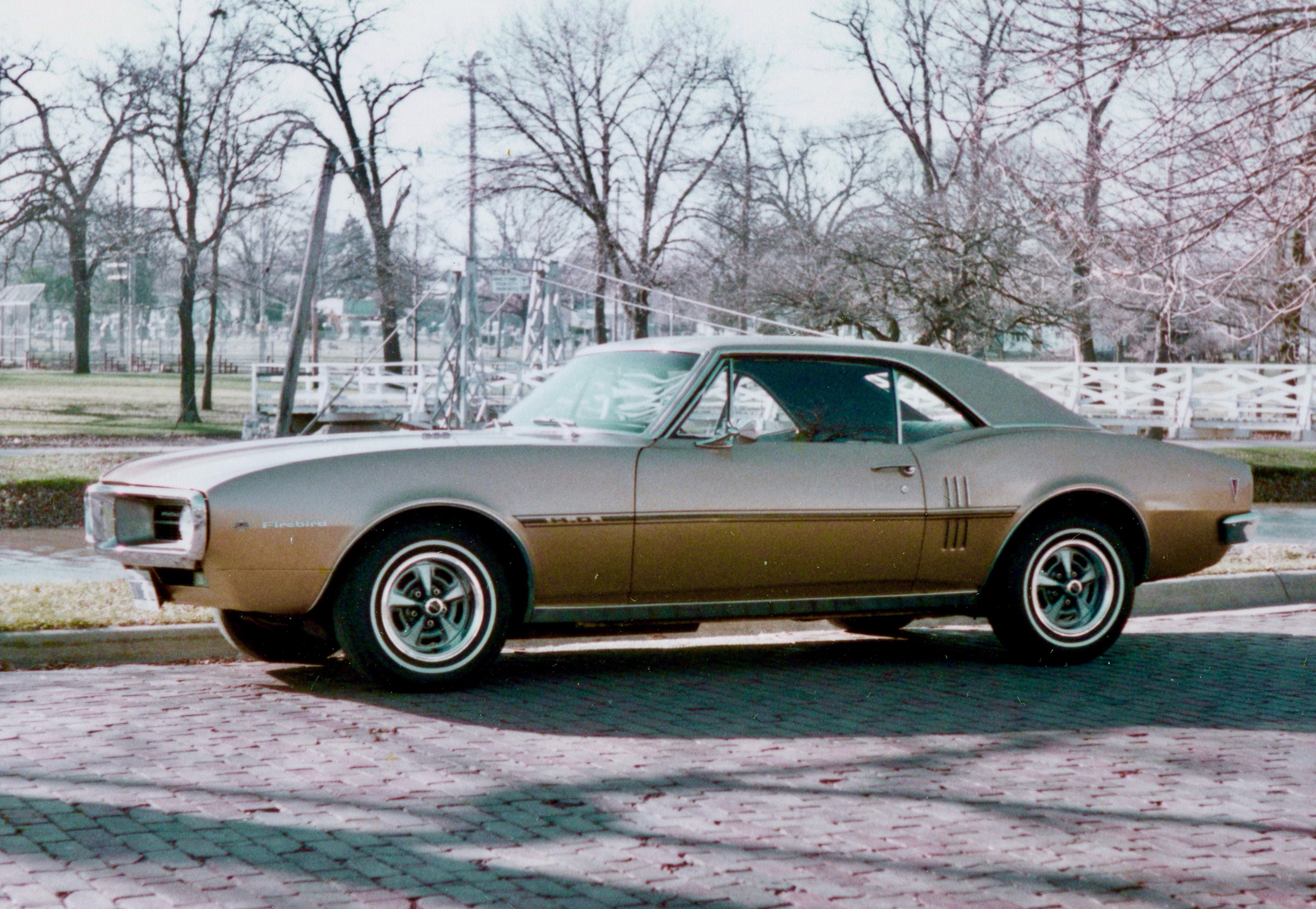 This photo taken at Chautaqua Park in Pontiac Illinois, shows the ‘bird prior to any restoration work. Circa 1985. 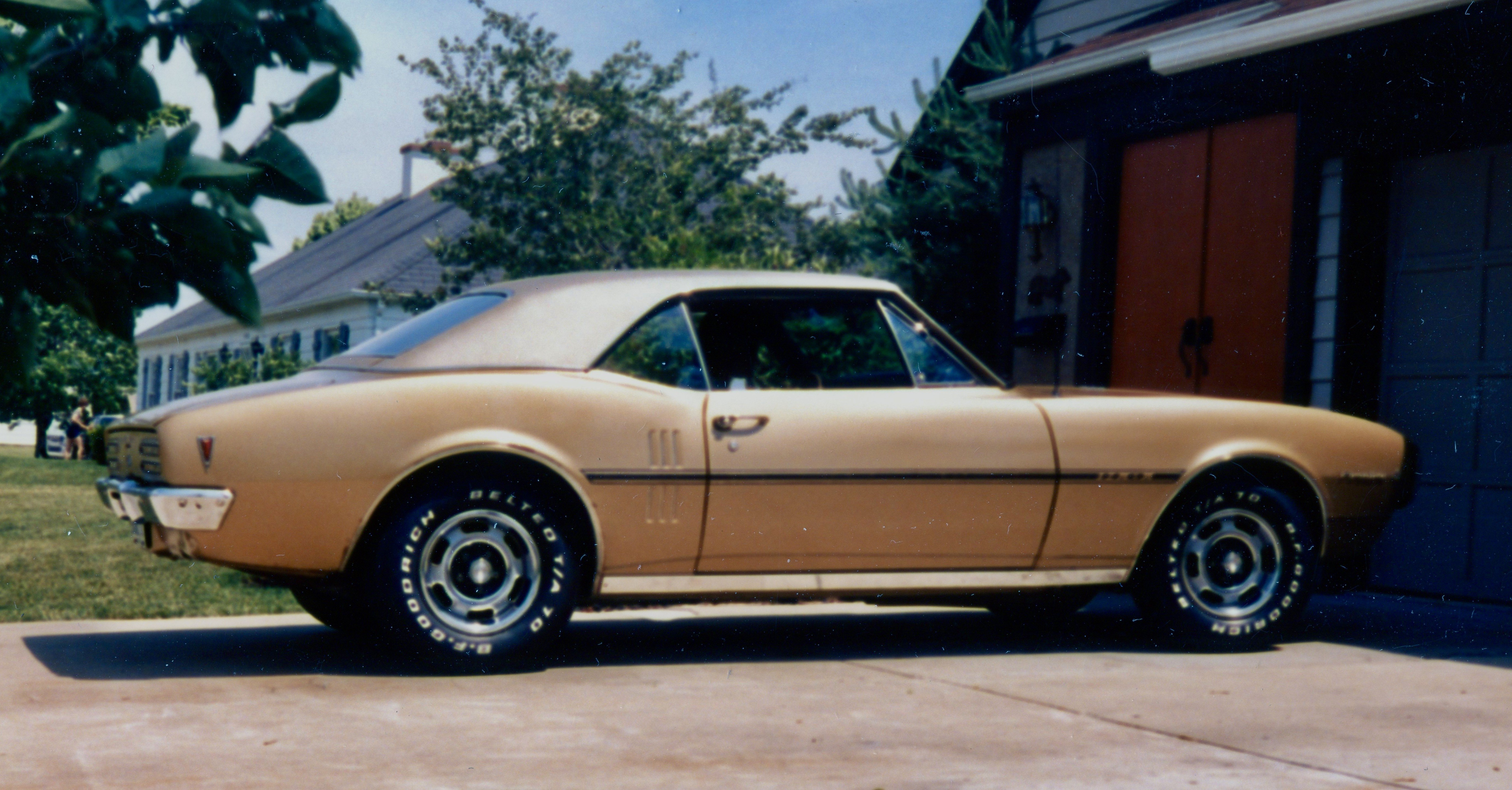 Circa 1986, how it appeared for most of the time that they drove it, prior to beginning any restoration work.

We had a great trip home and shortly afterward got the opportunity to view the anxiously anticipated 326 HO’s.  Needless to say we ended up purchasing the Coronado Gold coupe for Brett with the understanding that when he could afford to buy it from me it would become his.  For the next couple of years, I often used the car as my transportation to work making daily round trips from Oswego IL to Naperville North High School where I taught Biology.  I was always impressed with how smooth yet powerful the HO was.  Also, the Hurst 4-speed unit seemed much stronger and smoother shifting than the non-Hurst unit in the red 326 HO convertible that Jeff had kept for himself, and which he had stored for some time at my home. Mechanically, the Gold coupe was sound and aesthetically pleasing to look at but eventually the desire to correct flaws became an urge.

As you can see, time and the Midwest weather is starting to get the best of this ‘bird. It was time for Larry to get her restored. 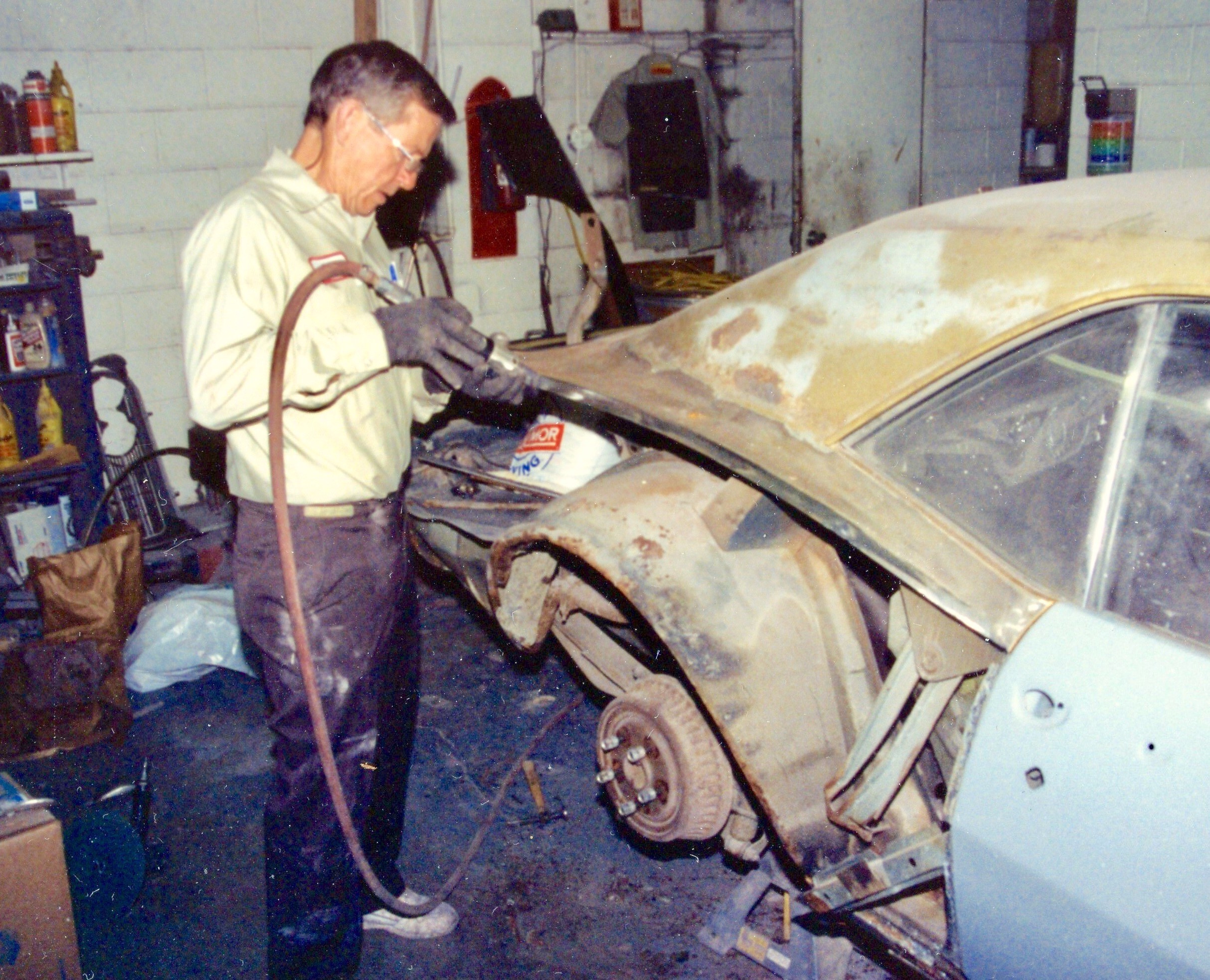 Jack Morrison preparing to install reproduction rear quarters. The front fenders were replaced with NOS ones. 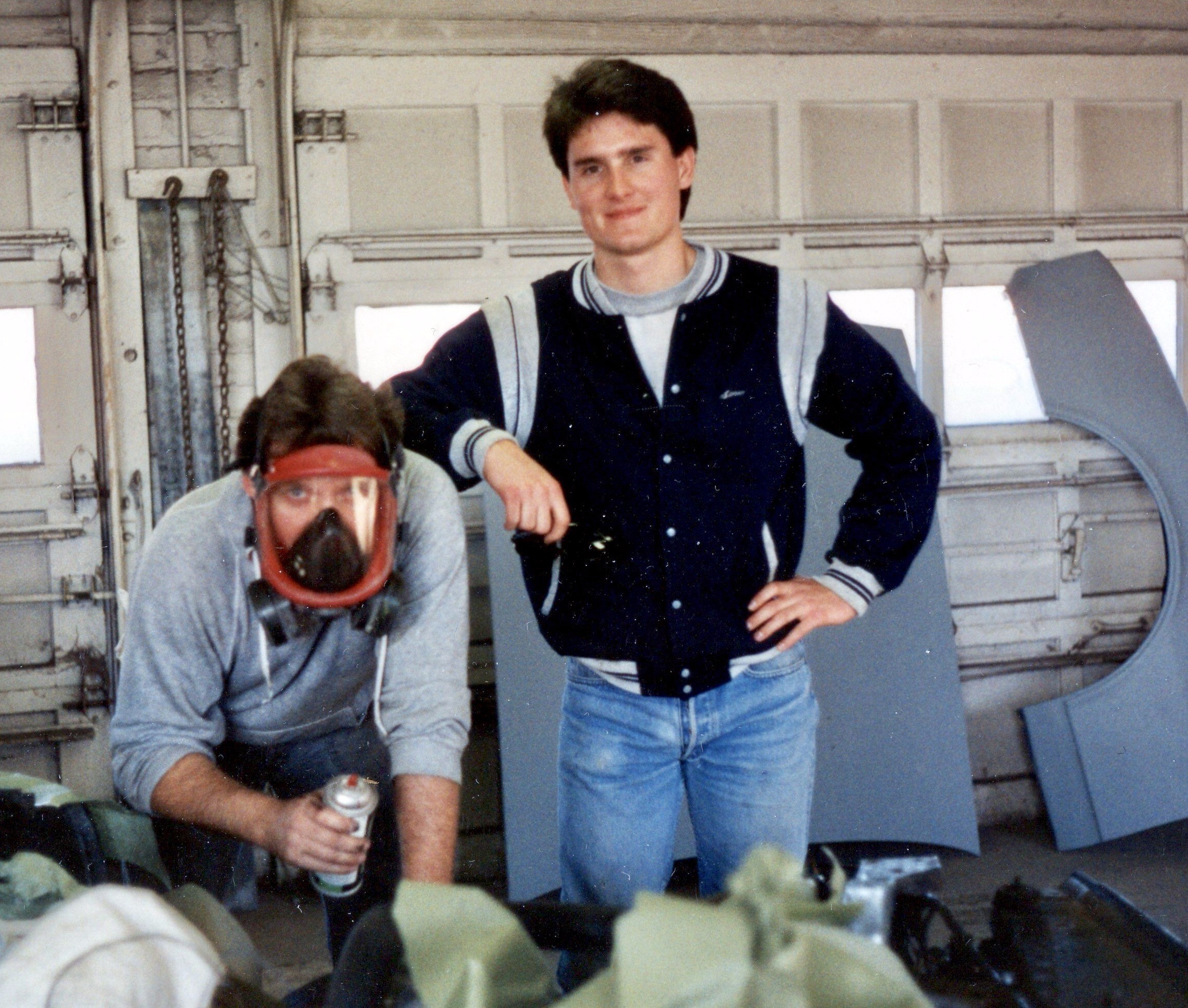 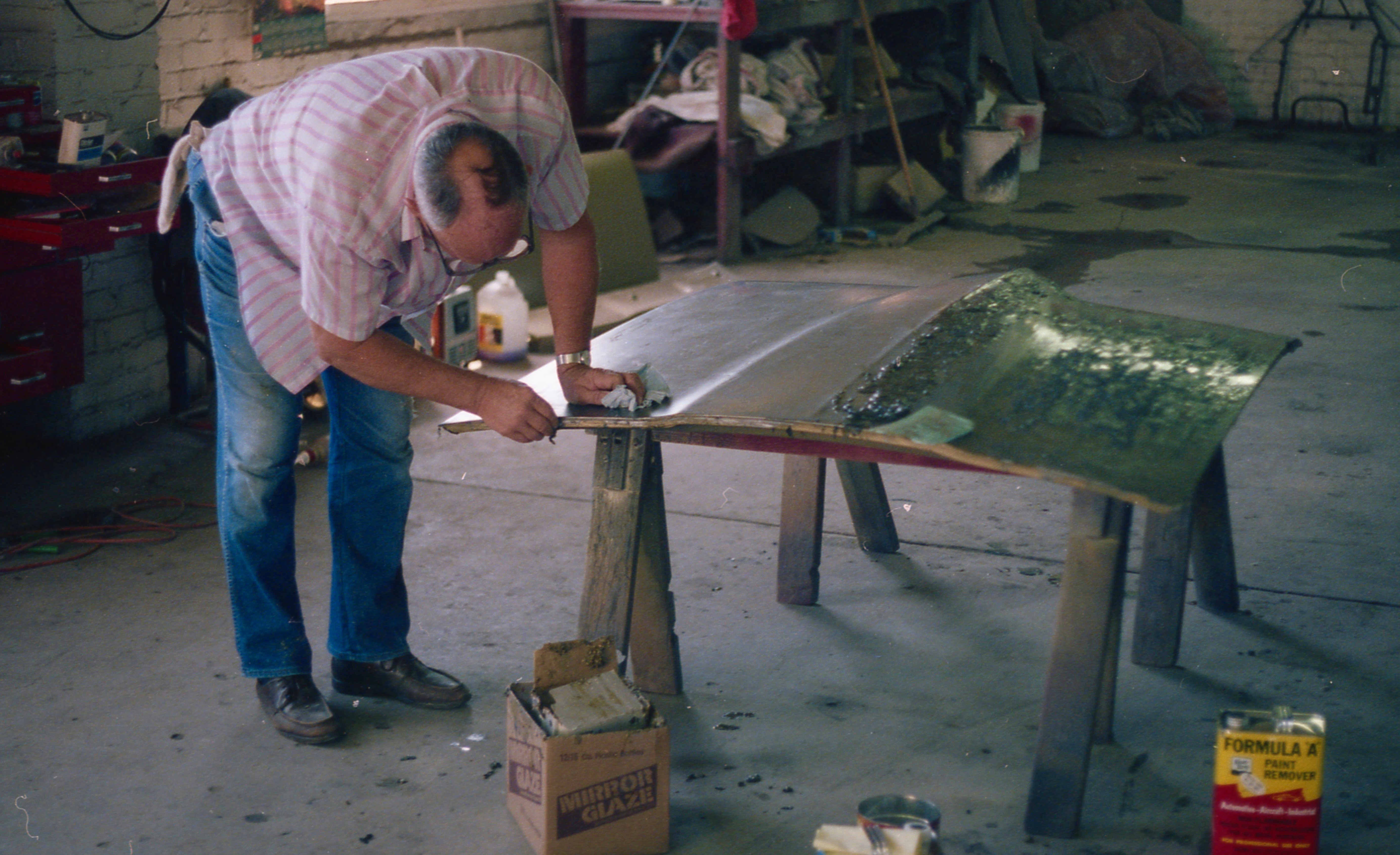 Somewhere around the late 1980’s or early 1990’s I made a casual arrangement with a local paint and body man in Pontiac, IL, who knew my father-in-law, to begin a body-on restoration to correct the flaws.  Since we often visited my in-laws on week-ends the arrangement we made allowed Brett, myself, and my father-in-law to come into the shop and do some of the early prep and clean-up tasks which we all enjoyed.  I do not regret this wonderful opportunity for the three of us to work together and bond while seeking a common goal, however, after many months of slow progress and a change to a distant rural location for the shop, I decided that it was time to retrieve the car and take another approach. 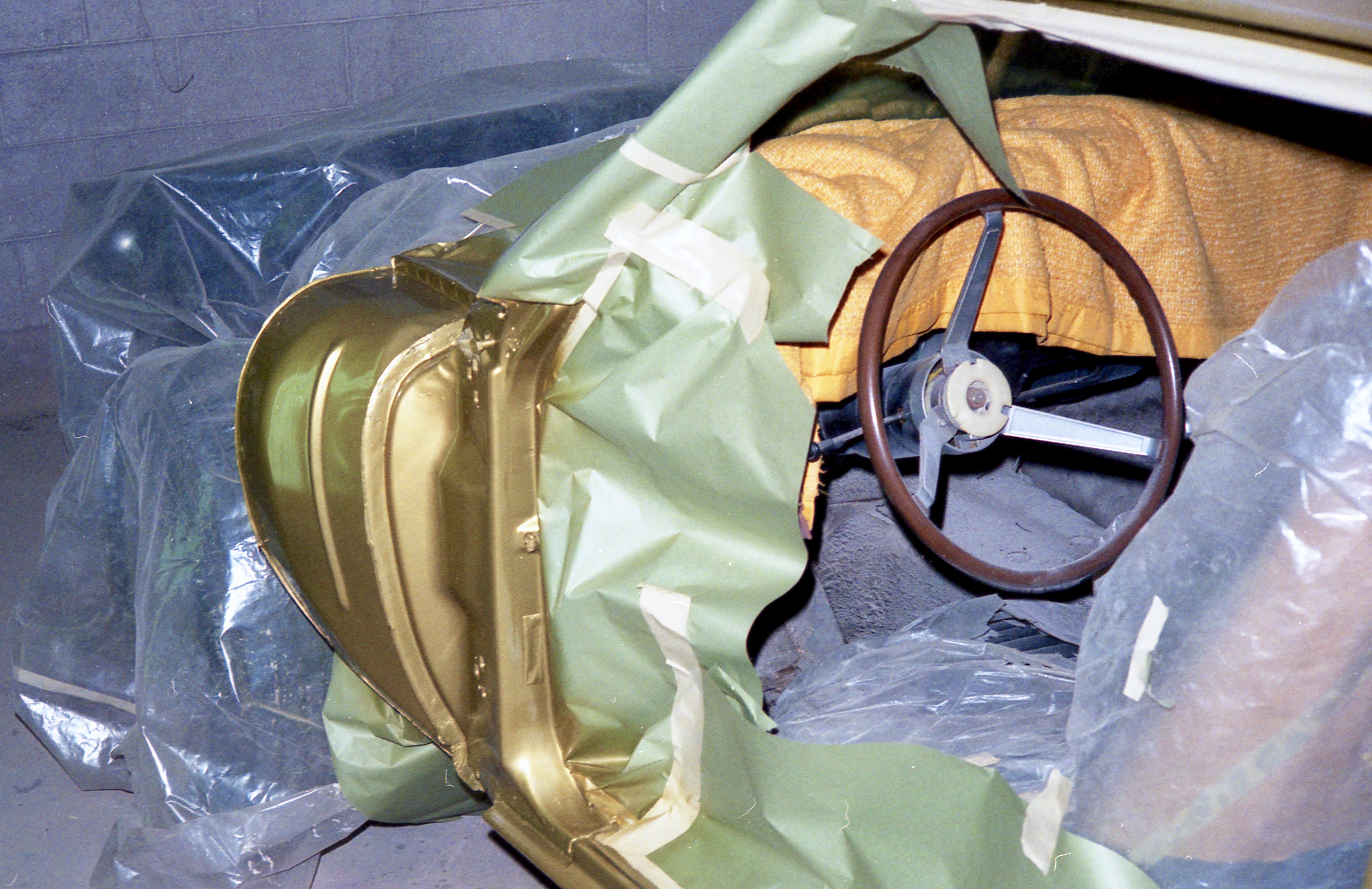 The Coronado Gold paint was matched to original factory paint on the cowl. 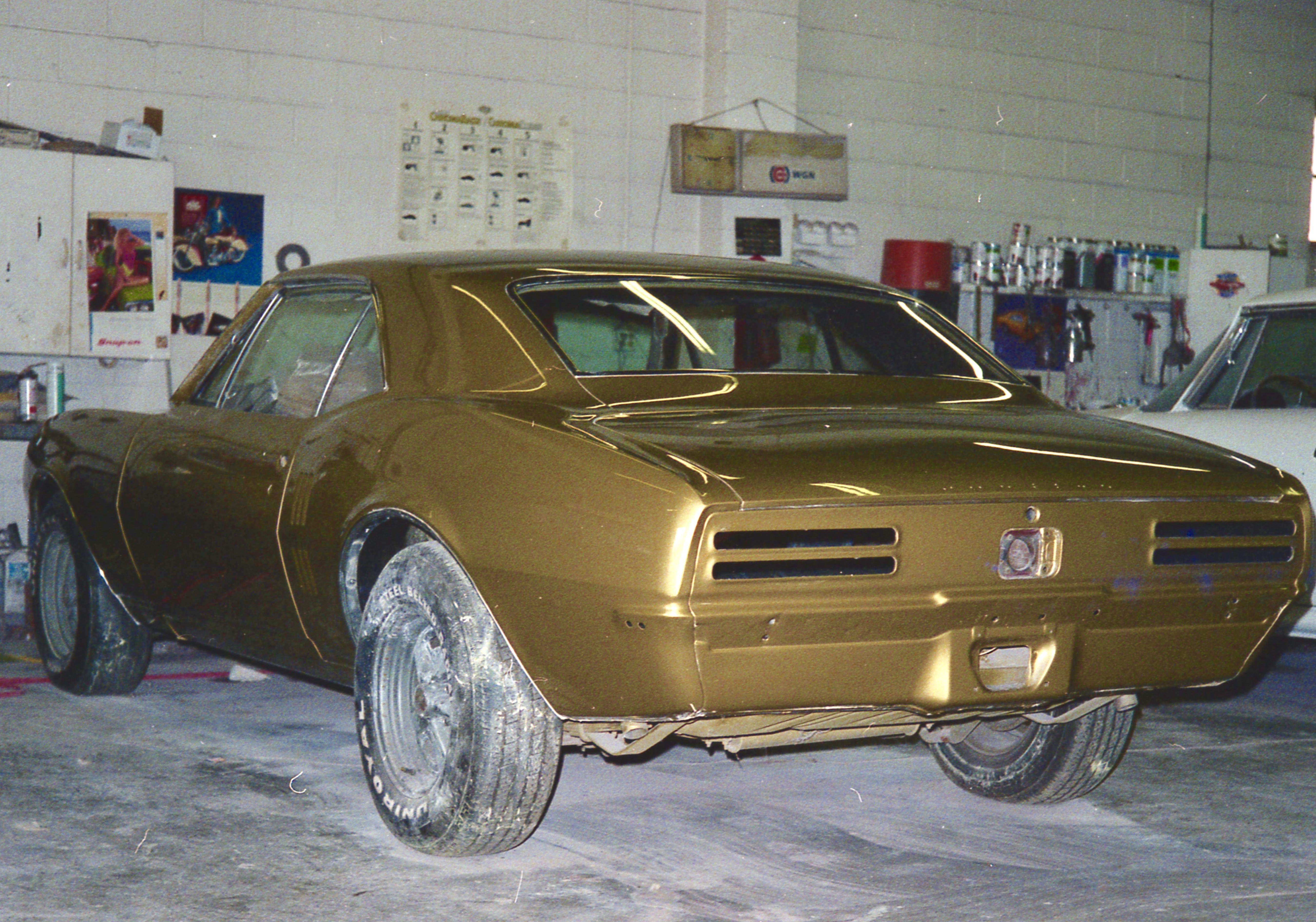 Here she is with the paint work just completed. 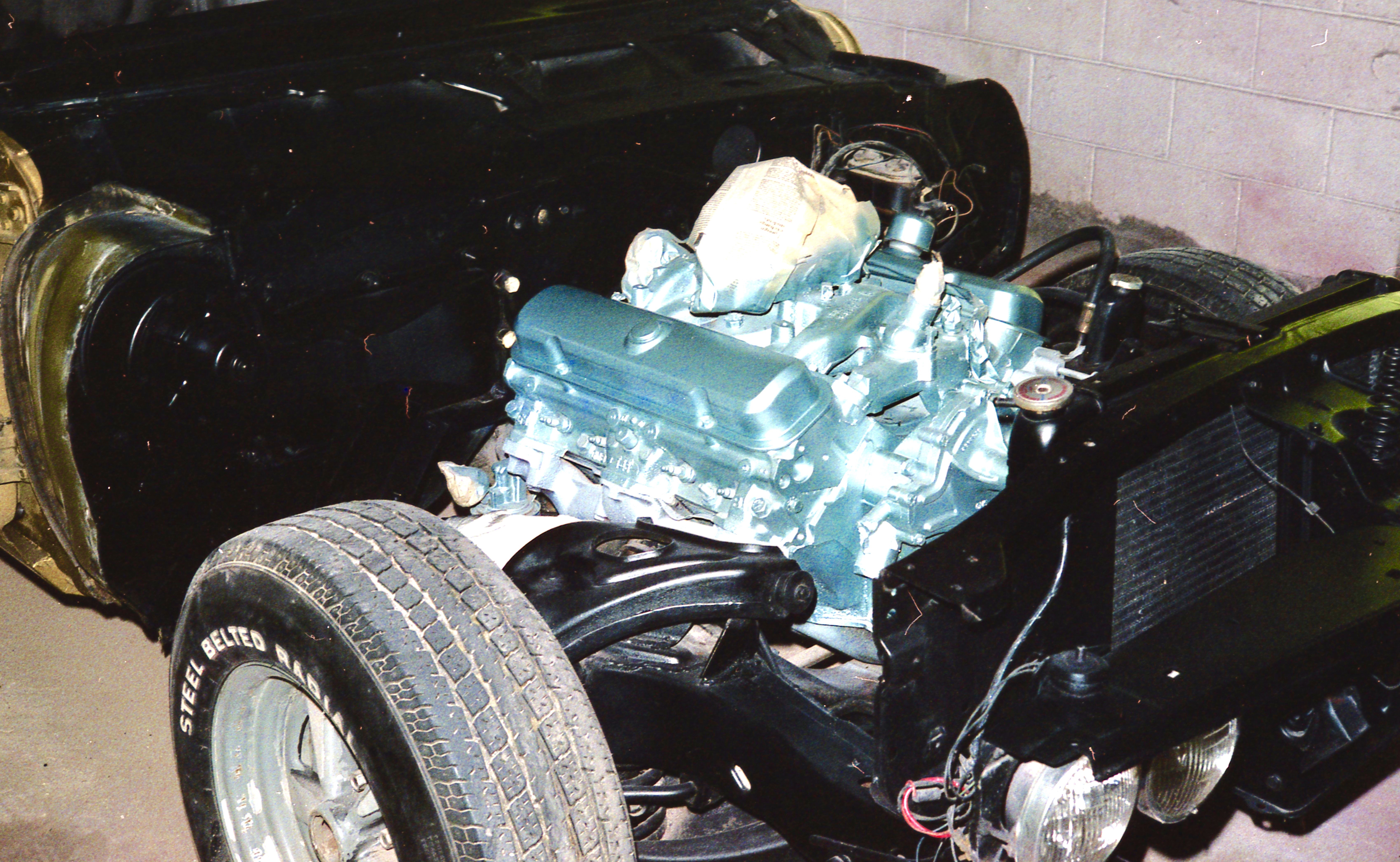 The freshly painted 326 HO engine. Little did we know what was about to happen next!

A good friend, John, recommended the local paint and body shop, Morrison’s in Aurora, IL, that he had used to complete his GTO project.  After unloading the car at Morrison’s shop, work began in earnest on the car.  Mr. Jack Morrison, a great guy, did much of the body work himself.  He also allowed John and I to do some sandblasting work on the car and for me to come in on evenings after school to work on engine and engine bay detailing.  Brett and “PaPa” were even able to come in a couple of times to continue helping with the project.  John and I trailered the car to my house when the paint work was completed – another mistake, because the car sat this way untouched as home projects, “honey-do” lists, and Pontiac related adventures and distractions got in the way.  Although safely protected and covered in a climate controlled garage the car waited a long time for further attention! 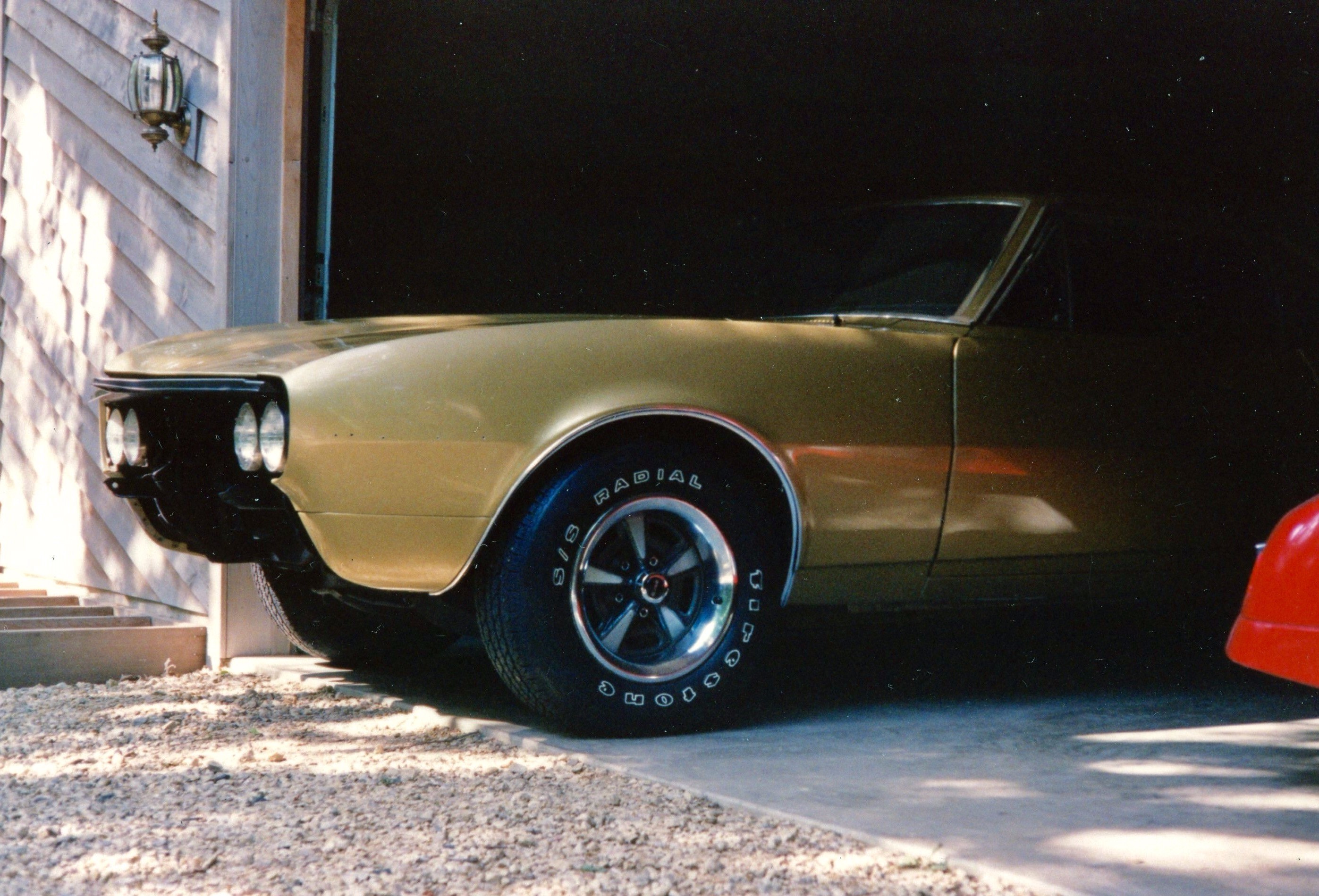 The incomplete Firebird project sat from 1992 to 2011 in my garage waiting for final restoration.

Finally, in the late Fall of 2011, I met with Marvin Minarich Jr., proprietor of Marvin’s Motor City, a restoration facility in Morris, IL to complete the restoration.  I had known Marvin senior, a fellow POCI member for many years and had become aware of Marvin Jr.’s reputation for detail and workmanship, having seen examples of it at POCI events and local shows.  We worked out a plan to do a more or less complete and thorough restoration of mechanical, and drive-train items.  This would include new brakes and brake lines, new fuel lines and gas tank, carb rebuild, and many new exhaust components, and restoring the undercarriage.  The lacquer paint, however, one of the last to be done at Morrison’s shop, was fine as it had been carefully maintained, and protected.  Marvin would add the HO stripes which I had purchased many years before. 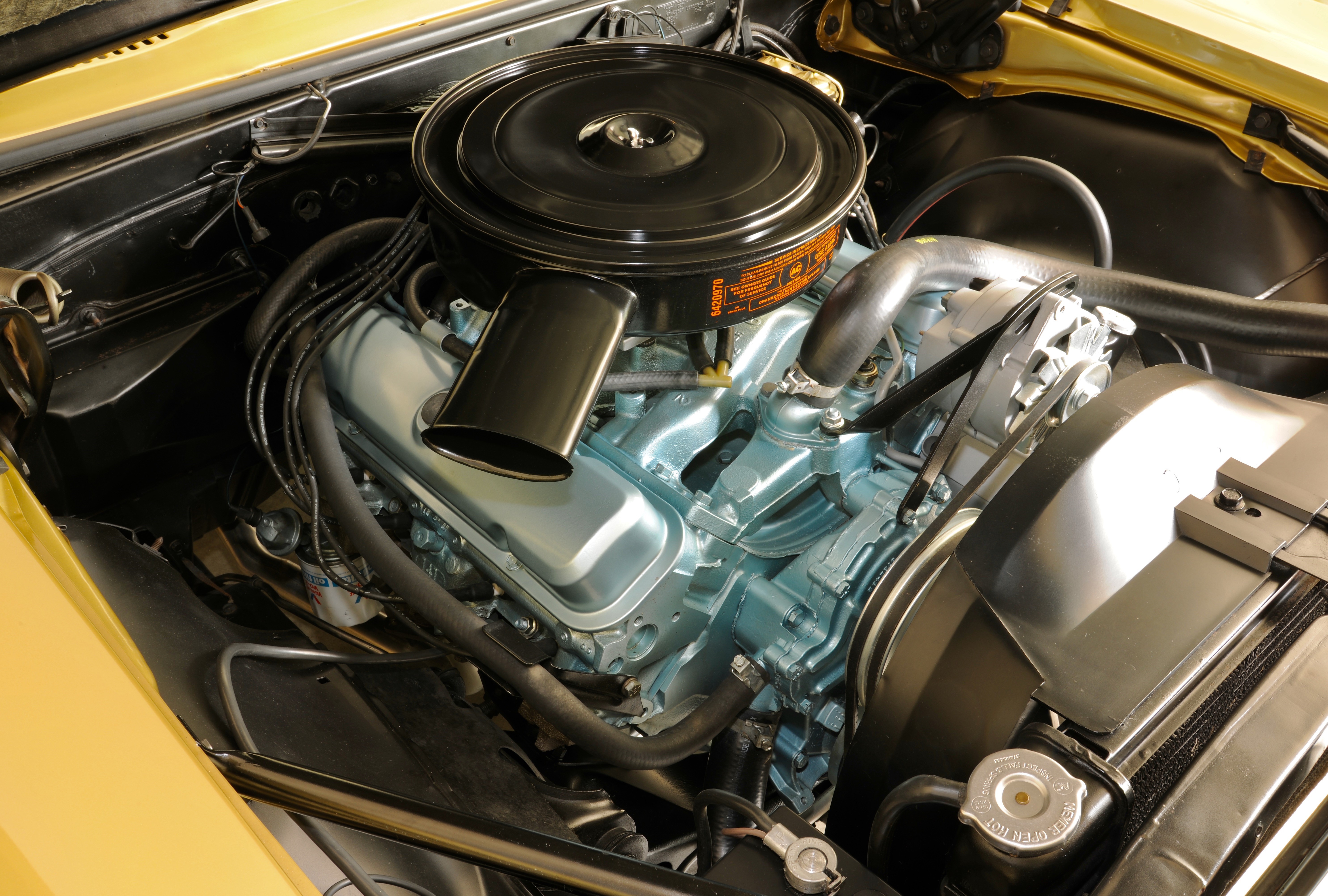 Here’s the view of the completed engine bay with the 326 HO engine. 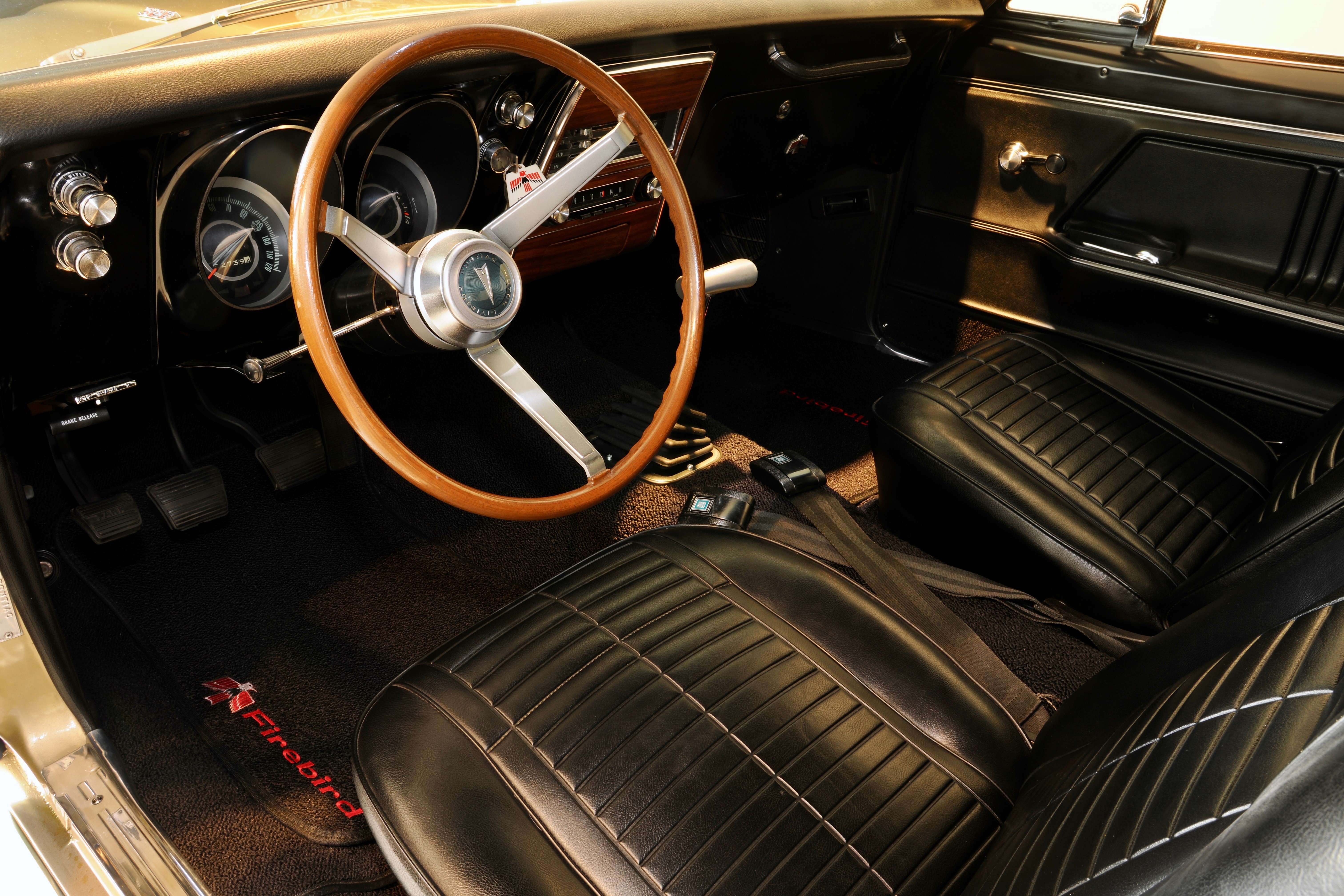 The original interior, except for a ’68 wheel and T-handle shift knob on the Hurst shifter. 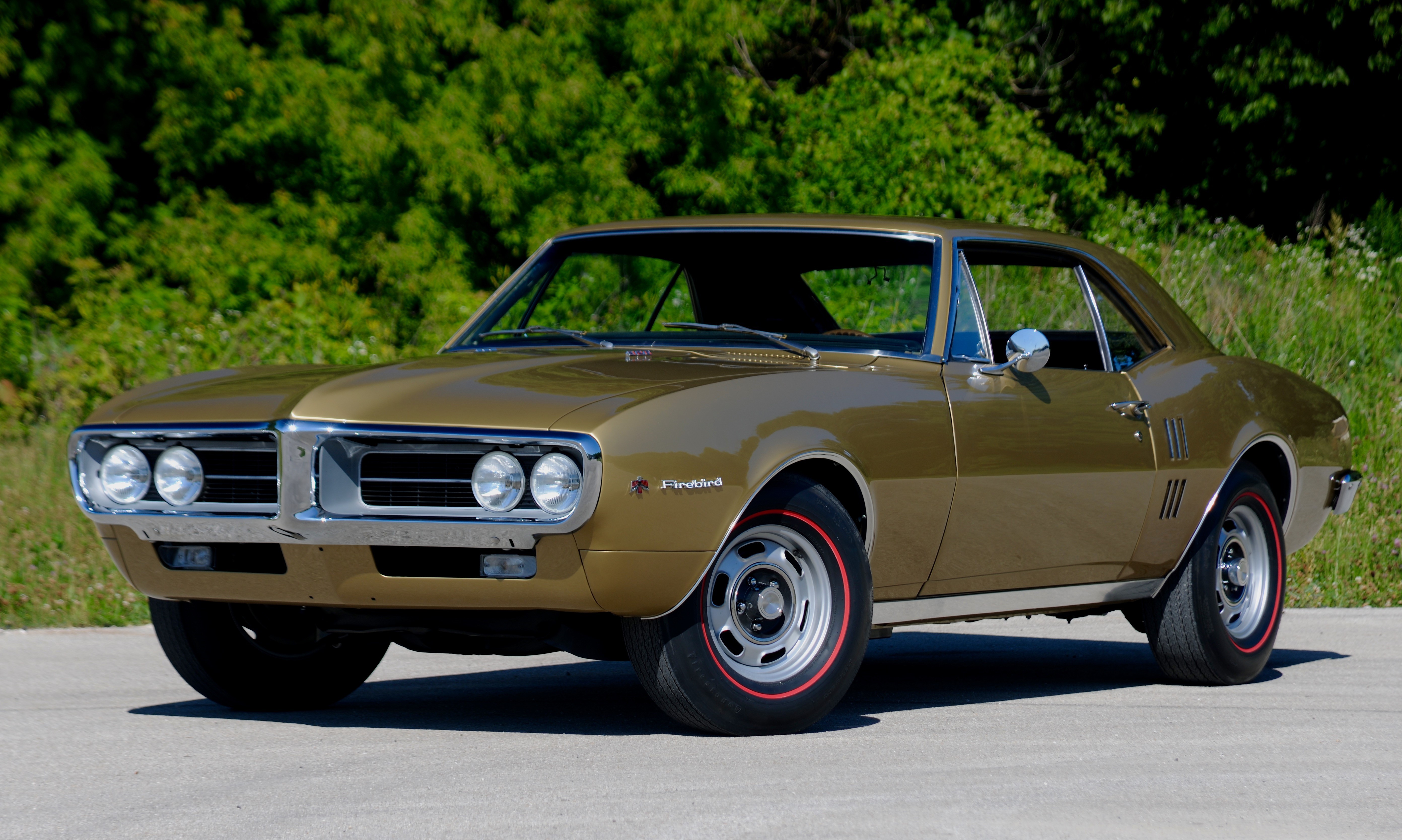 The freshly restored ’67 with the 326 HO engine, before the HO stripe was added.

The back showing off the dual tail pipes.

In an interesting coincidence, Marvin was simultaneously completing restorations on two “Tiger Gold” GTO’s at the same time the Firebird was in the shop.  He had been invited to display both of them at the Muscle Car and Corvette Nationals (MCACN) show in Rosemont, IL in late November 2012.  He thought it would be interesting to add the Firebird HO and one of his restored “Tiger Gold” Schwinn bicycles to the display making it an all “Tiger Gold” affair. 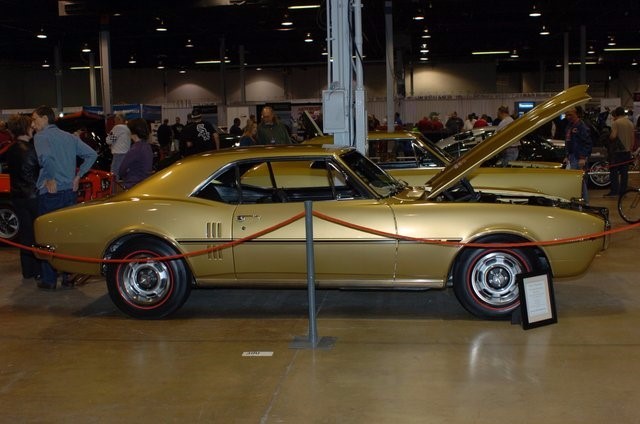 At the Muscle Car and Corvette National show in 2012 (In Marvin’s “Tiger Gold” display.)

As my wife and I were driving the HO from Marvin’s shop to home in Oswego we were stopped for a road sign when the gentleman stopped in front of us jumped out of his vehicle and ran back to inform us that we were leaking something from under the car.  We quickly pulled over at the nearest spot where we could safely check for the leak.  I quickly checked the oil level and discovered it somewhat low.  We later discovered we were getting anti-freeze in the oil.  Ultimately we would learn that the problem was a cracked lifter bore and the 326 HO motor was dead.  I researched the problem and found a place; “Indy Cylinder Head,” in Indianapolis, IN, that was confident they could repair the motor, but of course I would have to get it to them which was just not feasible at the time.  As luck would have it one of my recommended engine contacts; Ron Rocchi, a respected engine builder and fellow POCI member, had a complete WS motor out of a GTO available for sale and the time to do the build during the ensuing spring months of 2013.  After considering my situation, and researching the comparative values of the original, numbers-matching 326 HO vs. a “created” 400 HO with knowledgeable Pontiac enthusiasts, I made the decision to take their advice and build the WS 400 HO. 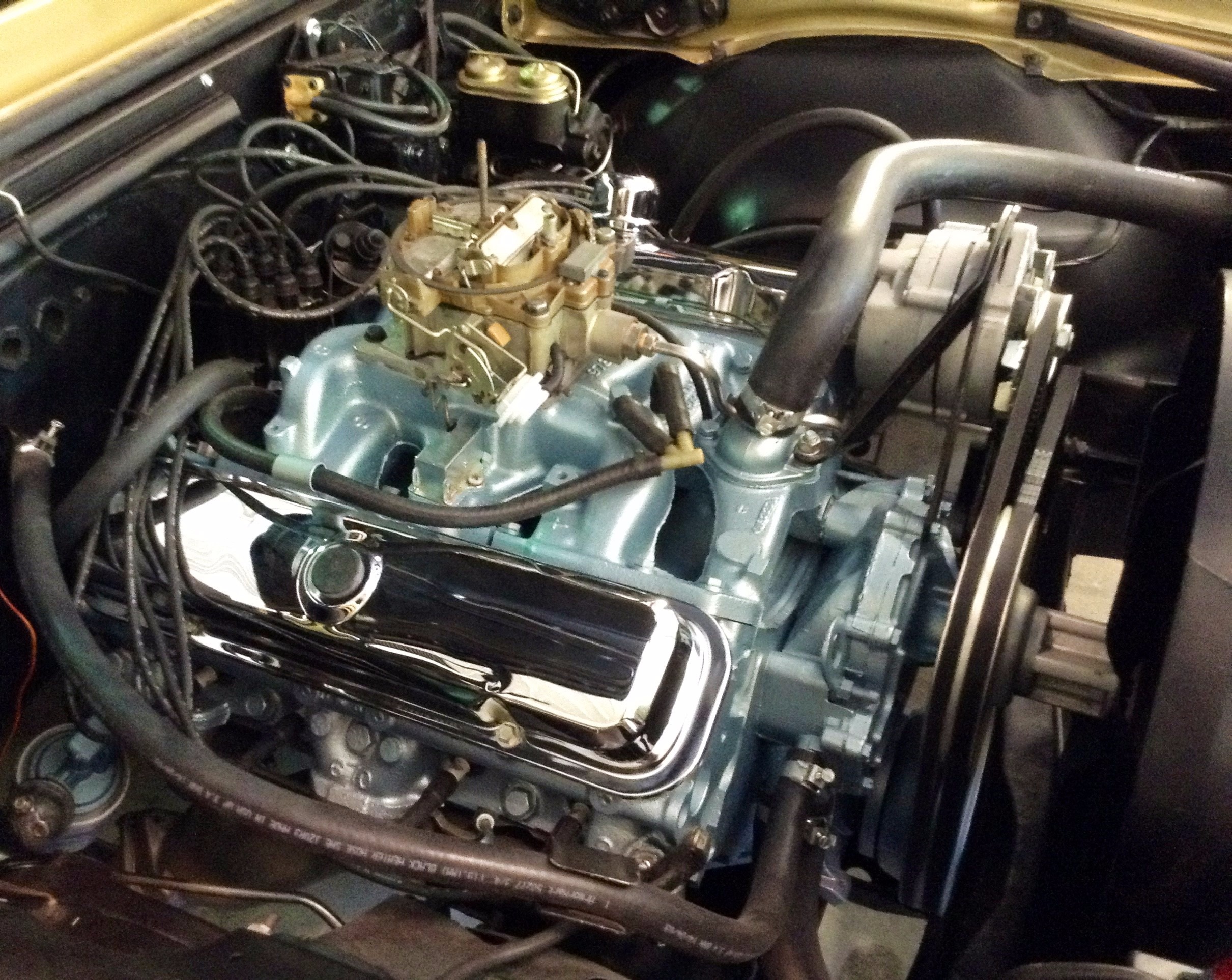 The new 400 engine installed and ready to run.

Fortunately, the car did not need to be driven in order to participate in the MCACN show in November 2012.  On set-up day Marvin came to our house with his enclosed trailer and was able to wench the car aboard, and unload it the same way at the show.  When my wife and I attended the show, it was exciting, yet sad, to see it all shiny and bright in the display area but knowing that it’s heart was broken.  After the show Marvin trailered the car back to his shop, removed the motor and returned the car home to me.  Marvin installed the WS 400 motor during the summer of 2014; also converting the 326 HO to a 400 by changing the hood, and adding the appropriate badges, etc.

On August 26, 2014 I joined Marvin at his shop to video the initial start-up and run-in of the WS 400 motor – very exciting!  I was able to bring the car home in September of 2014 and enjoyed exercising it some before an annoying “klunk” became a concern.  We found out that the driveshaft simply needed to be rebalanced, and after that, all was good.  I have been able to enjoy driving the Firebird each summer since.  Unfortunately, circumstances and my son’s work schedule have not allowed him the opportunity to drive it yet.  We are planning to correct that this summer.  I can’t wait to see the excitement in his eyes when he hears that WS 400 HO-rumble and engages that clutch and Hurst shifter for the first time – experiencing the “growl” and the “grab” of our new golden bird! 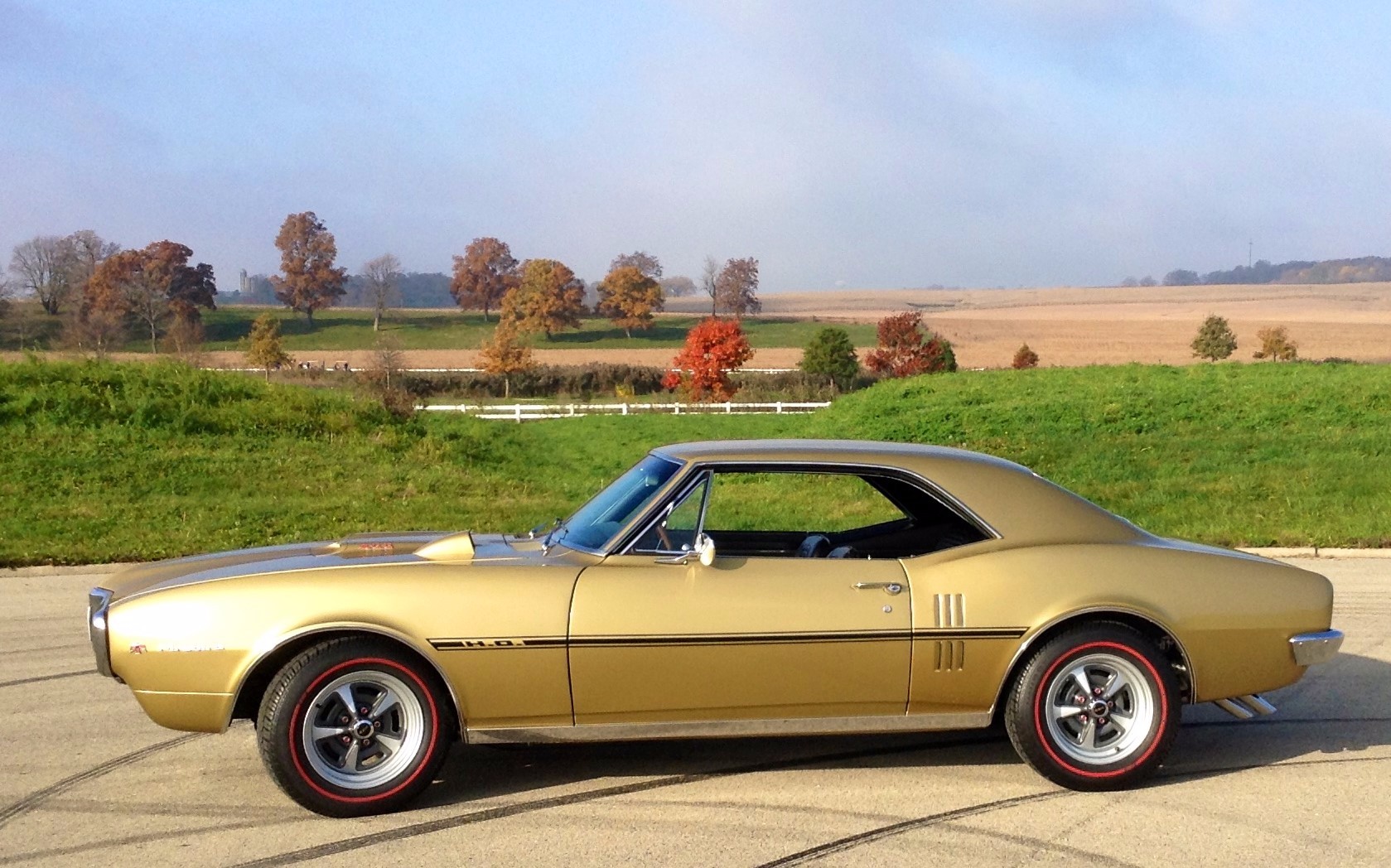 The transformation to a “400” HO. Complete with 400 engine, hood and badging. 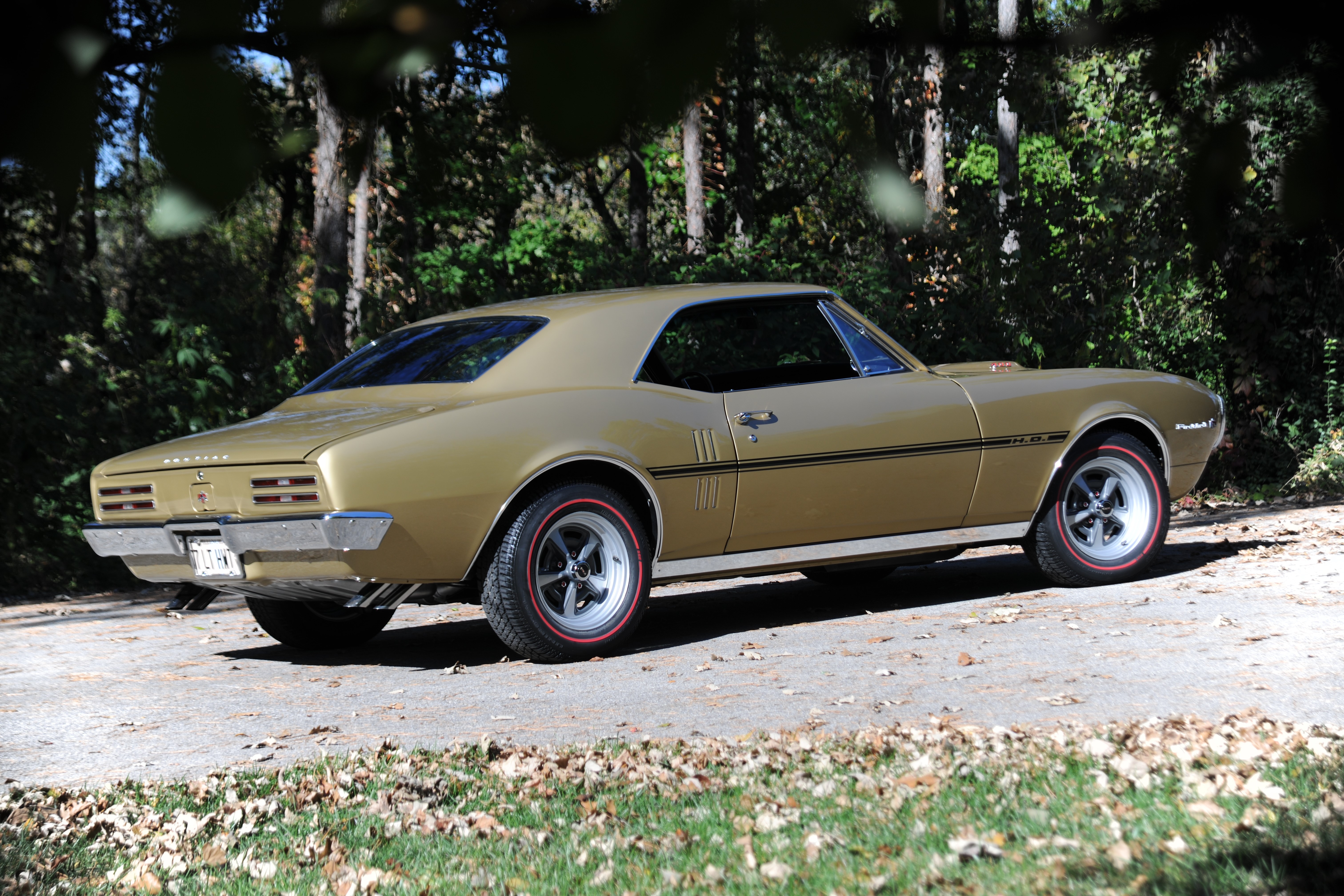 Another shot with the 400 hood and HO stripe.

Editor’s note:  Since Larry’s vintage vehicles don’t get driven to too many shows, I was privalaged to visit with Larry and Cheri last summer and enjoy one of Cheri’s homemade lunchs with Tim Dye and Dave Sullivan, while touring Larry’s beautiful Pontiac collection.  Ken

(Story and pictures by Larry Delay.)