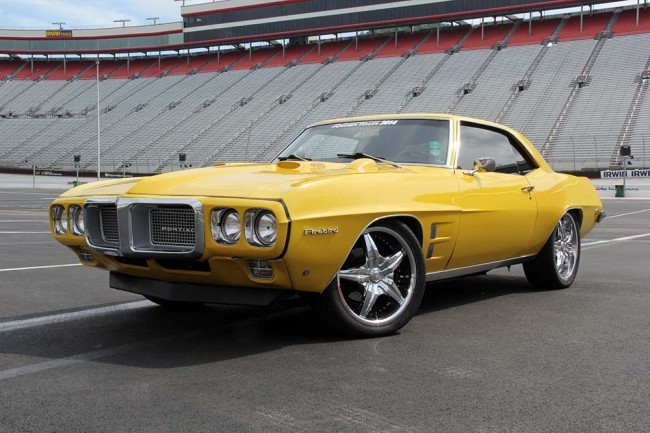 Midwest Firebird’s member, Chris Shawver and girlfriend Karen Duncan told us about his 1969 bright Yellow 455 restomod coupe and shared their experience on the Hot Rod power Tour and what it was like to be featured in both Hot Rod Magazine and the Hot Rod web blog written by Elana Scherr.

Elana noted, “Chris is from Oklahoma City on his second Power Tour. Karen is from Little Rock, and this is her first time on the trip. They are traveling in Chris’s ’69 Pontiac Firebird. The ‘Bird started life as a six-cylinder three-speed car, but now it’s got a Pontiac 455 topped with Kauffman Racing heads, running a Crower cam and MSD atomic EFI, all backed by a 200 R4 overdrive transmission and 3.73 rear gears. The battery is in the trunk, and Karen and Chris are enjoying air condition and tunes thanks to a Vintage Air A/C and XM satellite radio.” 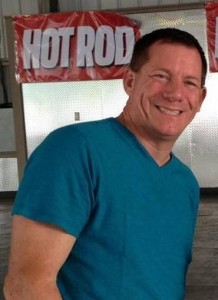 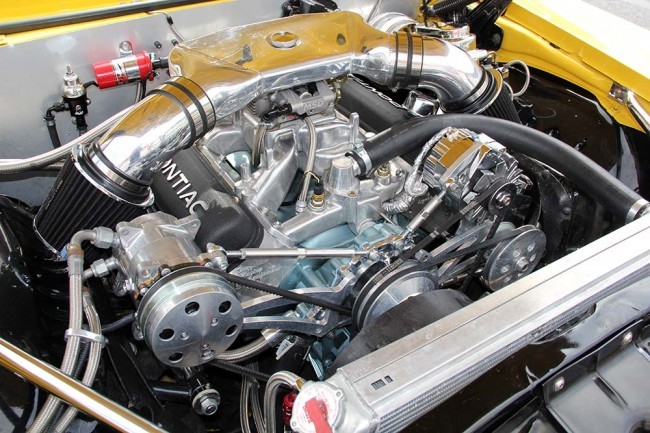 The best of both worlds – an old school 455 Pontiac block with modern heads, vintage air and EFI. 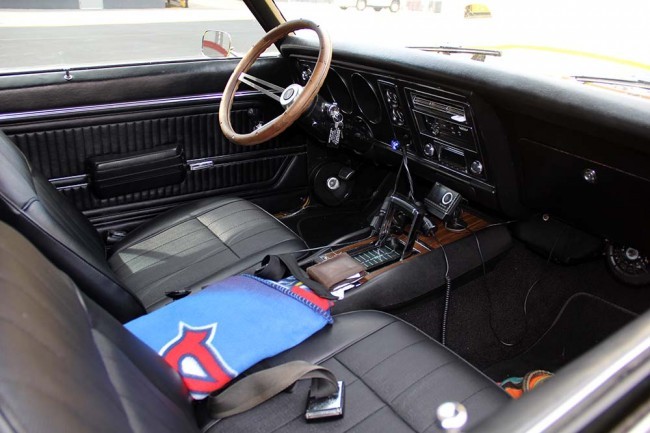 Chris tells us, “I got the car in 2011 and it had a small block Chevy engine in it and was painted. I basically reversed everything the guy before did.  Then upgraded everything from adding 4 wheel disc brakes, QA1 front suspension, QA1 shocks and springs, frame connectors and tons of other items.” 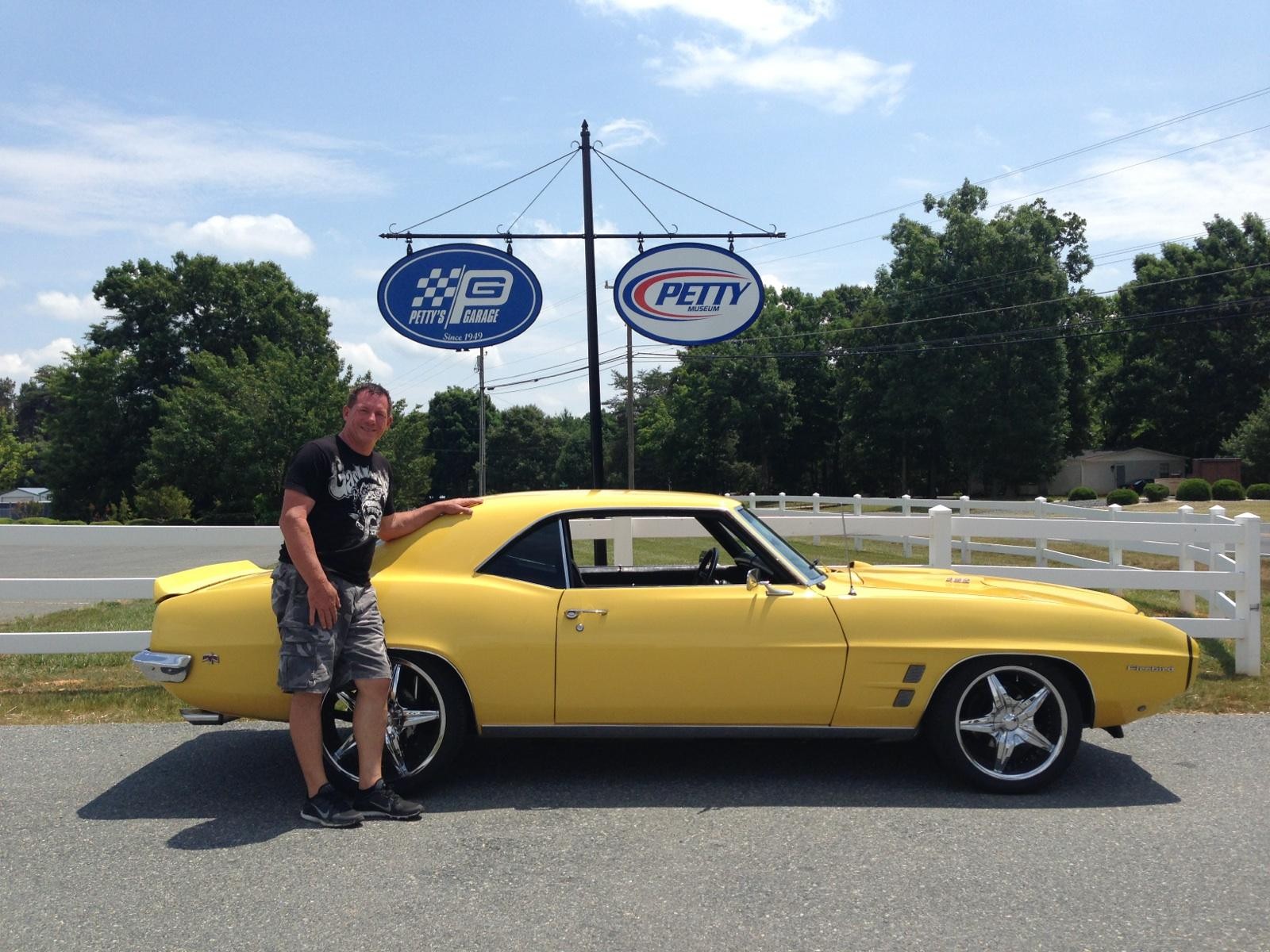 “As we prepared for the Hot Rod Power Tour this year, we were down to the wire, putting the engine back into the car just three nights before we hit the road.  And on the afternoon we were leaving out, June 5th, I was bolting the newly upholstered seats into place as she was loading the suitcases into the trunk.” 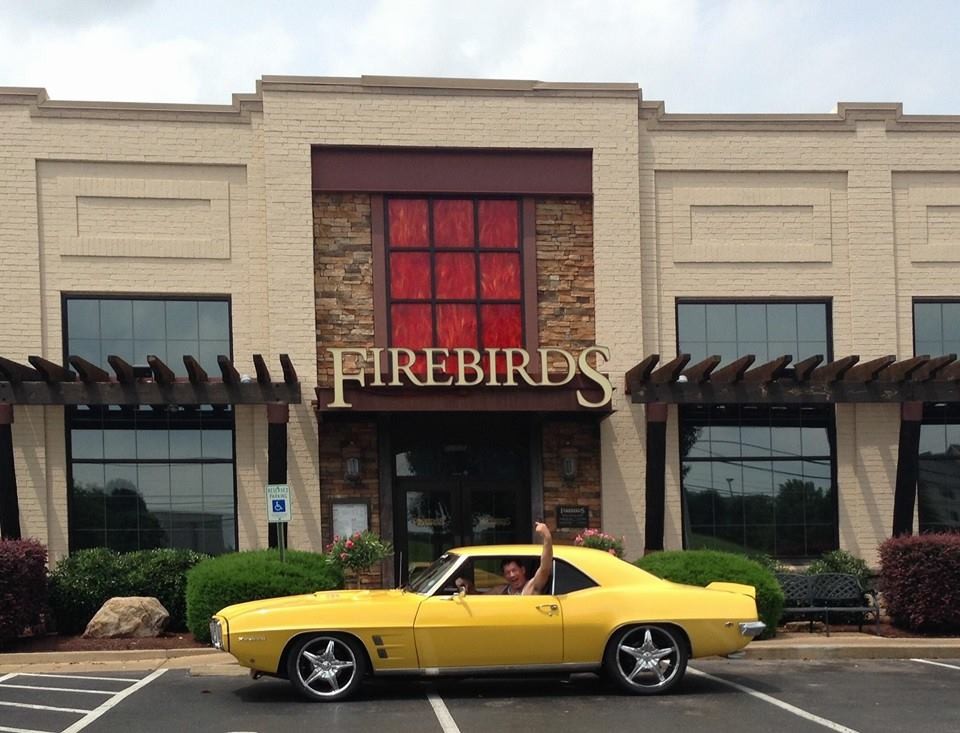 We just had to stop by the famous “Firebirds” in Memphis.

The first full day brought a 14 hour adventure across Tennessee, making it to Charlotte in time for two hours of sleep before making our way to the Z-Max Dragway for registration and breakfast with Richard Petty!  Day 2 took us on a great drive through the Smokey Mountains, making our way to Knoxville, Tennessee. 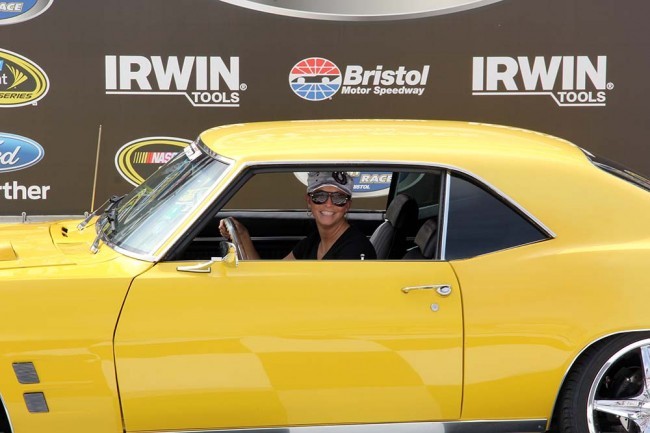 Karen’s all smiles after her thrilling laps around the Bristol Motor Speedway.

The following day as we headed on to Charleston, West Virginia we decided to take a detour on our own when we saw a sign for Bristol Motor Speedway.  As we pulled off the road to get a picture of the car in front of the Bristol sign we had a chance meeting with a of couple great Hot Rod magazine staffers, Elana Scherr and Thom Taylor.  Before we knew it we were pulling onto the “World’s Fastest Half Mile” ourselves! 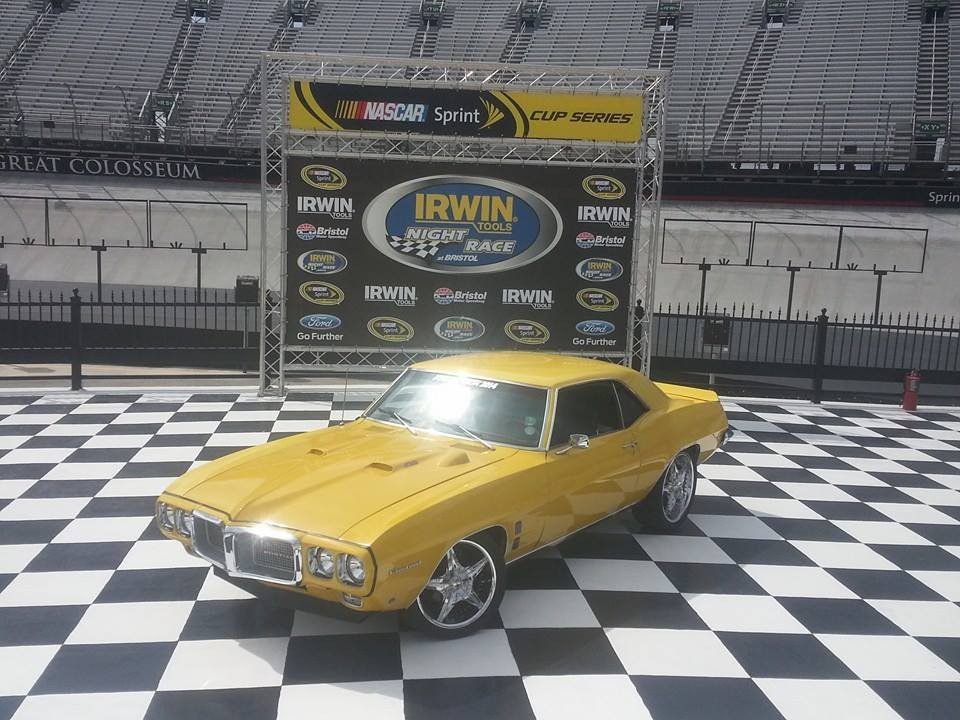 What an incredible opportunity complete with a couple of laps around the track, photo opps in winners circle and a feature story in the Hot Rod blog. 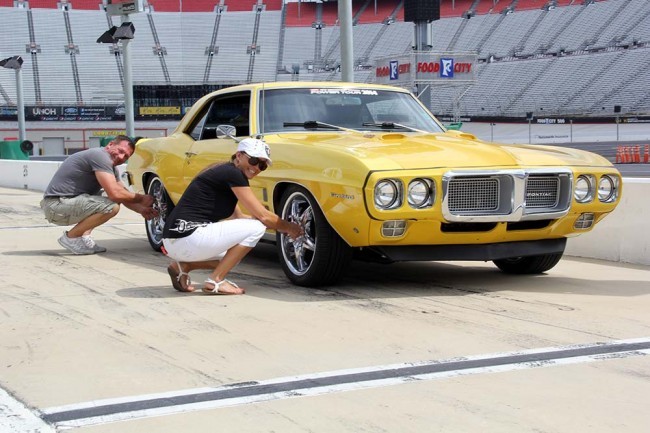 Chris and Karen clowning around as pit crew for the next race. 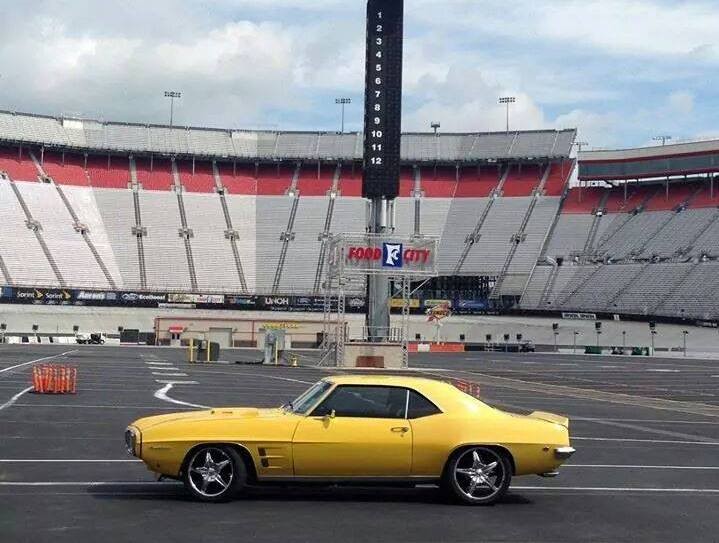 Just look at the enormity of this race track. 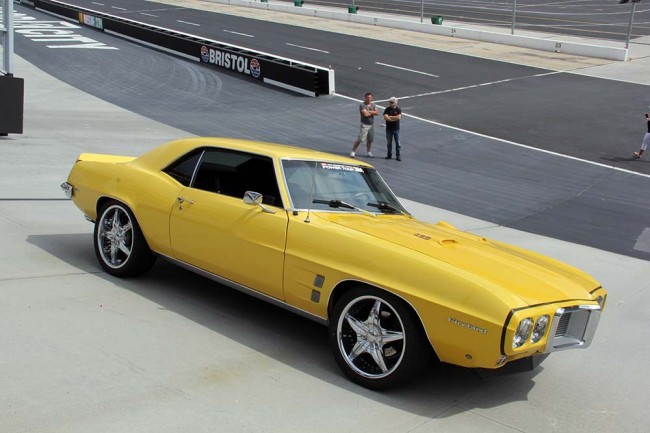 Elana commented from the blog:  “Chris took a slow lap around the track. It sounded amazing echoing off the walls and booming through the empty stadium. Just imagine what it must have sounded like when a whole field of destroked big blocks was running this course back in 1969.”

You can read the full Hot Rod post here: http://www.hotrod.com/events/hot-rod-power-tour/2014/see-a-1969-pontiac-firebird-on-the-high-banks-of-bristol-motor-speedway-during-hot-rod-power-tour-2014/#ixzz3QPauDbxA 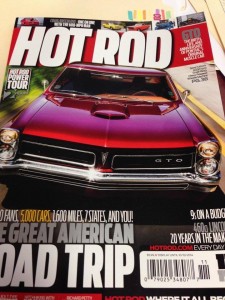 Making the November issue of Hot Rod Magazine (pg. 82) was definitely a once in a lifetime, surprise opportunity! 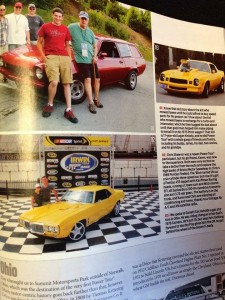 Back to the Tour… 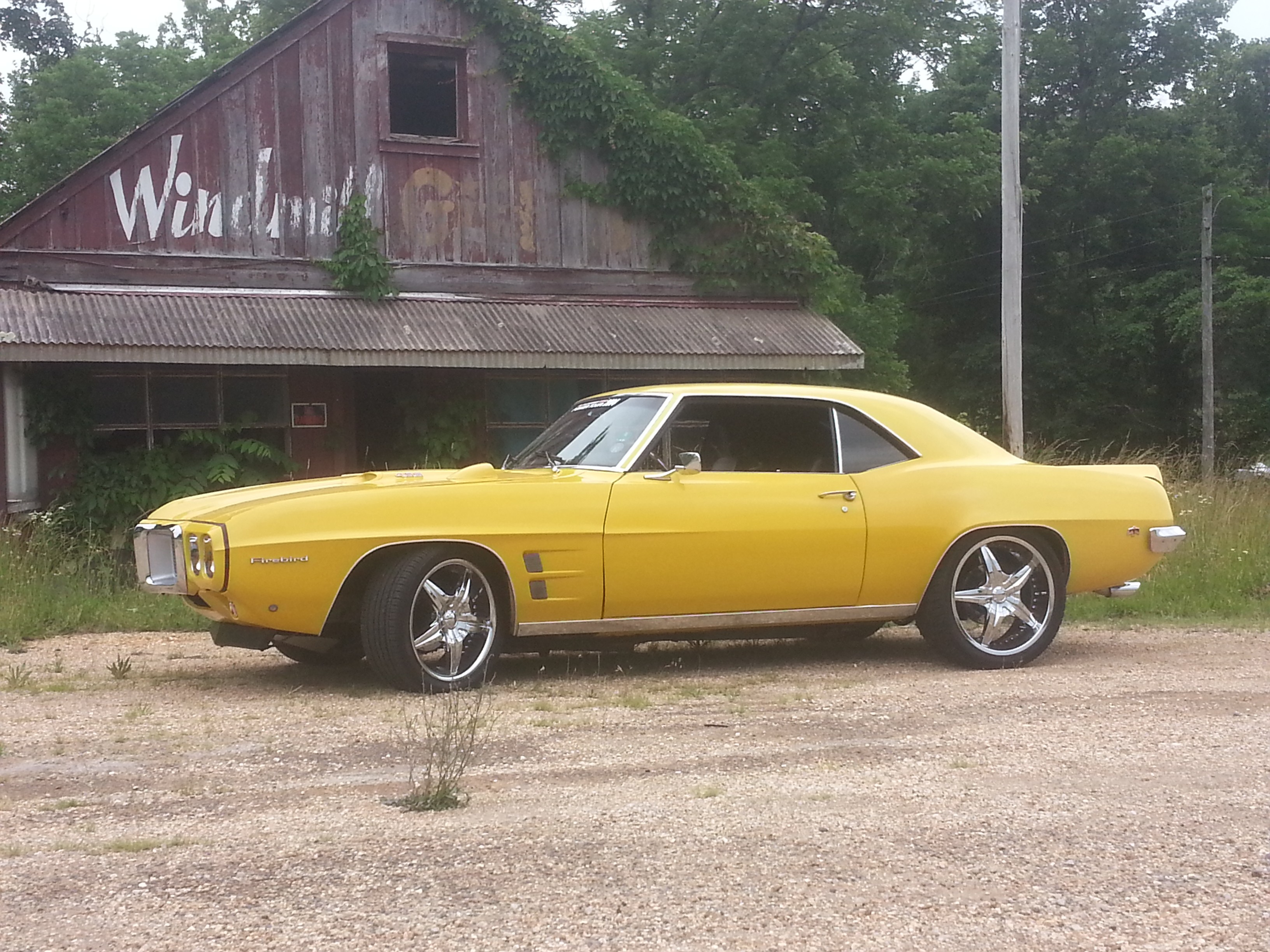 On a long tour, there’s plenty of wonderful opportunities for great photos like this. 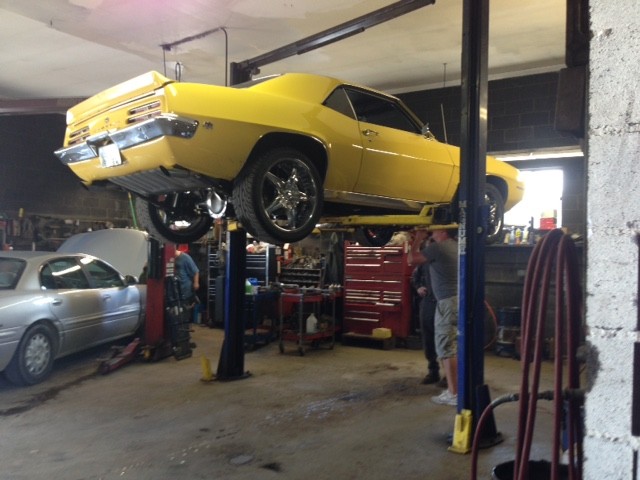 In the shop at Princeton.

We still had the huge smiles on our faces as we drove through the Blue Ridge Mountains of West Virginia, only to discover how hard the mountains could be on a 3,000 stall torque convertor.  We broke the torque convertor in Princeton and limped it into a transmission shop, leaving the car for the night, to finish that leg of the tour in a rental car, a four door Chevy Sonic (with a turbo and a spoiler, no less!) only to get the one speeding ticket of our trip!! We couldn’t convince the trooper that there was no way that a Chevy Sonic would even go 85 MPH…..lol.  The next day after picking up convertor we needed in Charleston, a bit of a backtrack to Princeton, transmission back in the car and we were back on the road in our bird. (Shout out to Aamco Transmission in Princeton, only $400 to R&R the trany!) 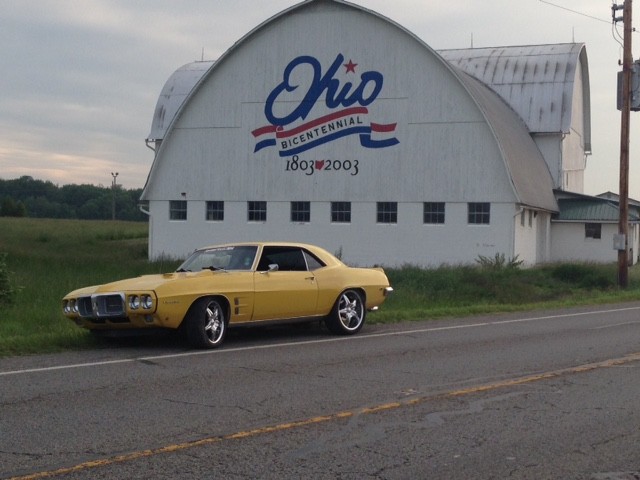 We had a great day of driving into Ohio, through Amish country, something we had never seen.  Day 5 was a very nice drive from Ohio, through part of Michigan and over to Indiana.  Making a cool stop at Lane Automotive for a lunch with the great Edelbrock family. 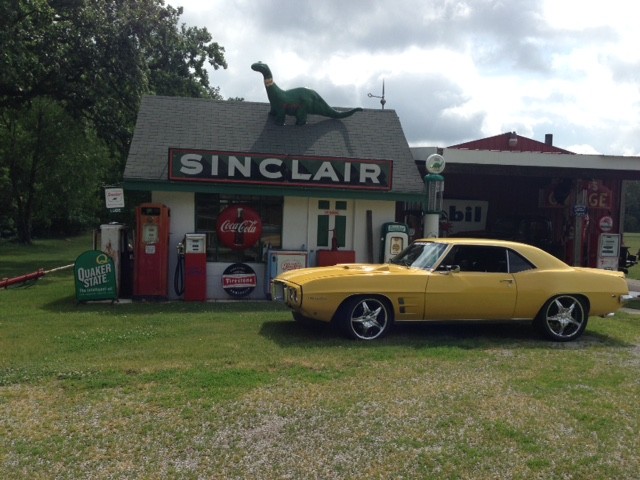 “This man’s backyard was so cool in Ottawa, Michigan – we just had to stop for a photo.” 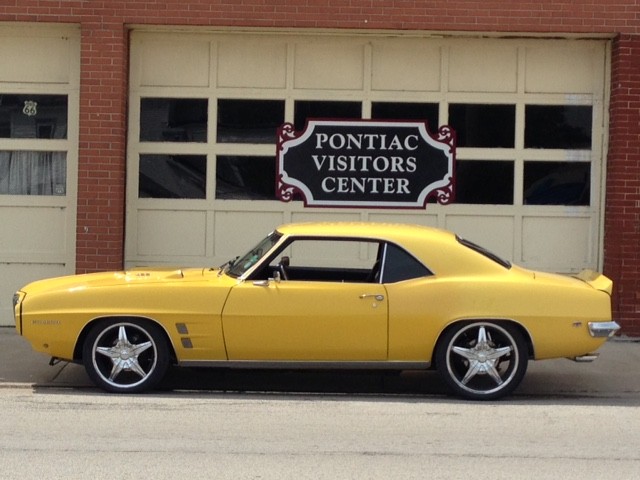 The following day we made our own stops at the Route 66 Museum and the Pontiac Automobile Museum in Pontiac, Illinois where we saw some incredible examples of Museum quality first gen Firebirds, also the very first Pontiac, which was actually a horse drawn carriage.  Finishing the day at Isle Casino in Bettendorf, Iowa. Note to Hot Rod Magazine: 5,000 hot rods, high temps, one way in, one way out, BAD IDEA! 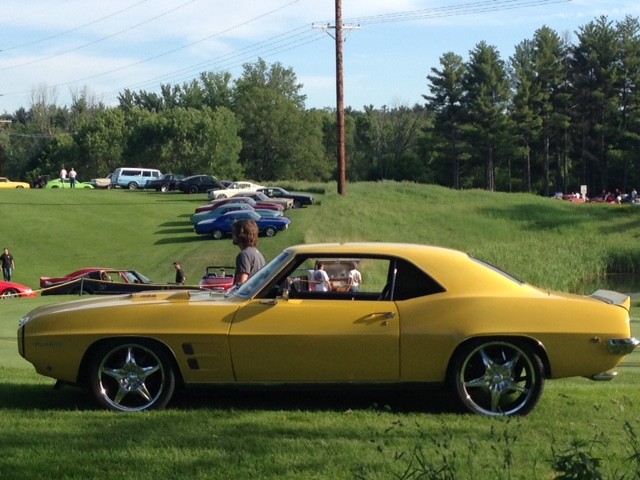 Final stop on the tour – the Wisconsin Dells.

Day 7 and we are off to Wisconsin Dells, Wisconsin.  As a long line of beautiful hot rods made the way through small towns along the way we loved the parade-like atmosphere as people lined the roads to see, complete with kids holding signs to welcome us! Ending at the beautiful Chula Vista Resort, for the final stop.  After enjoying the venue and then the evening checking out the sites of the Dells, we were officially Long Haulers! 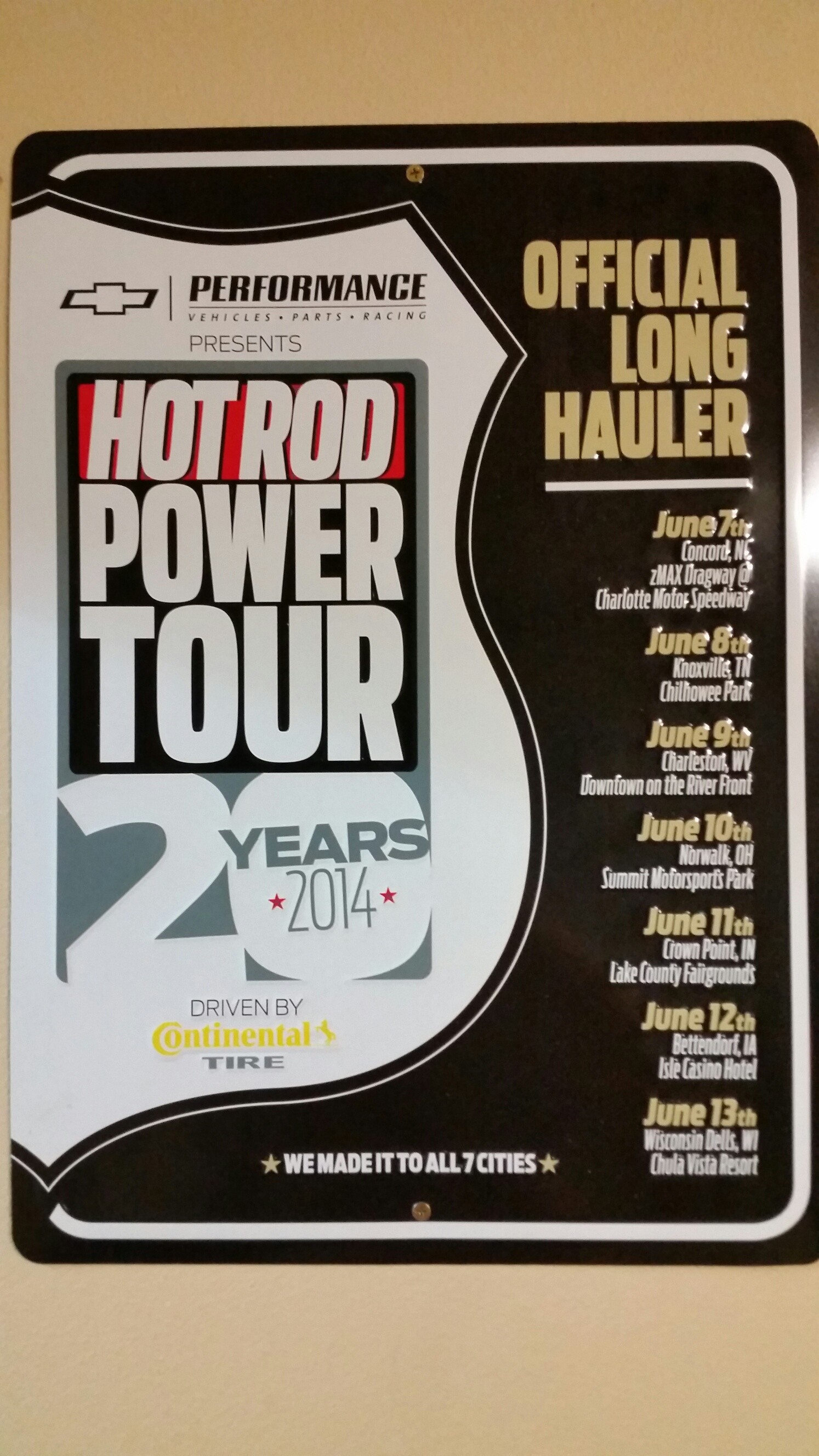 Leaving only the 800 mile drive home, to complete the over 3,100 miles traveled through 12 states in 10 days.  Arriving home each with one arm tanner than the other and agreeing this was one amazing journey with tons of laughs, beautiful sites and crazy opportunities…… Hot Rod Power Tour 2015, here we come!!!