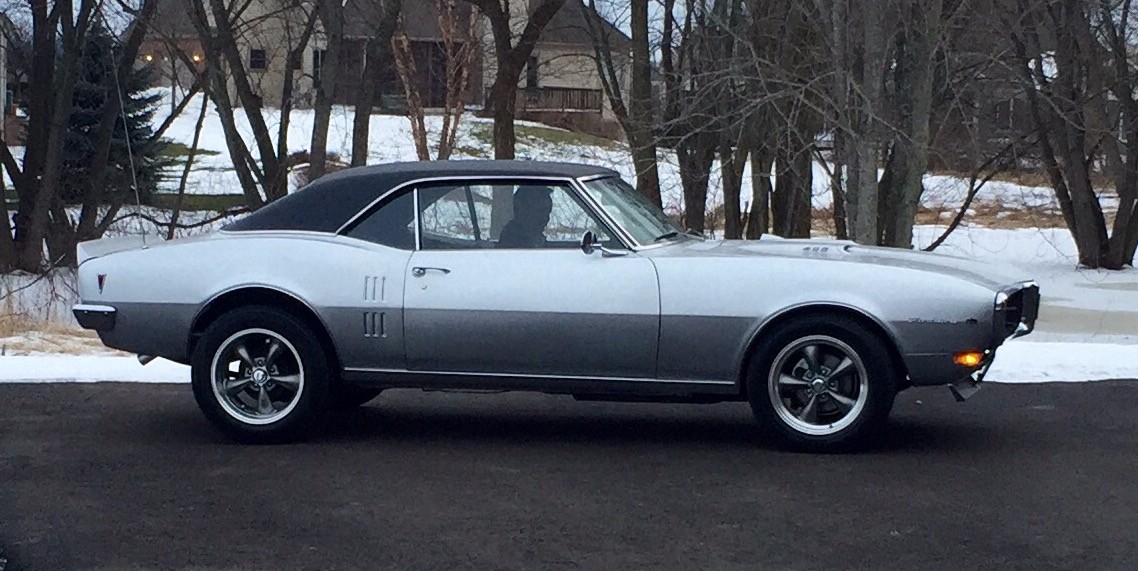 Here’s the story of one of our newest members, Mark Gerard from Wisconsin, who purchased this beautiful Palladium Silver ’68 400 HO coupe in the South last month. As you read this, you may not realize there were only 1,415 Firebirds built in 1968 with the WQ Code 400 HO engine, coupled with the 4-speed manual Muncie Transmission. This makes Mark’s new ride a very rare ‘bird indeed. Only the Ram Air Firebirds are more valuable than the HO (High Output) Firebirds from ‘68. 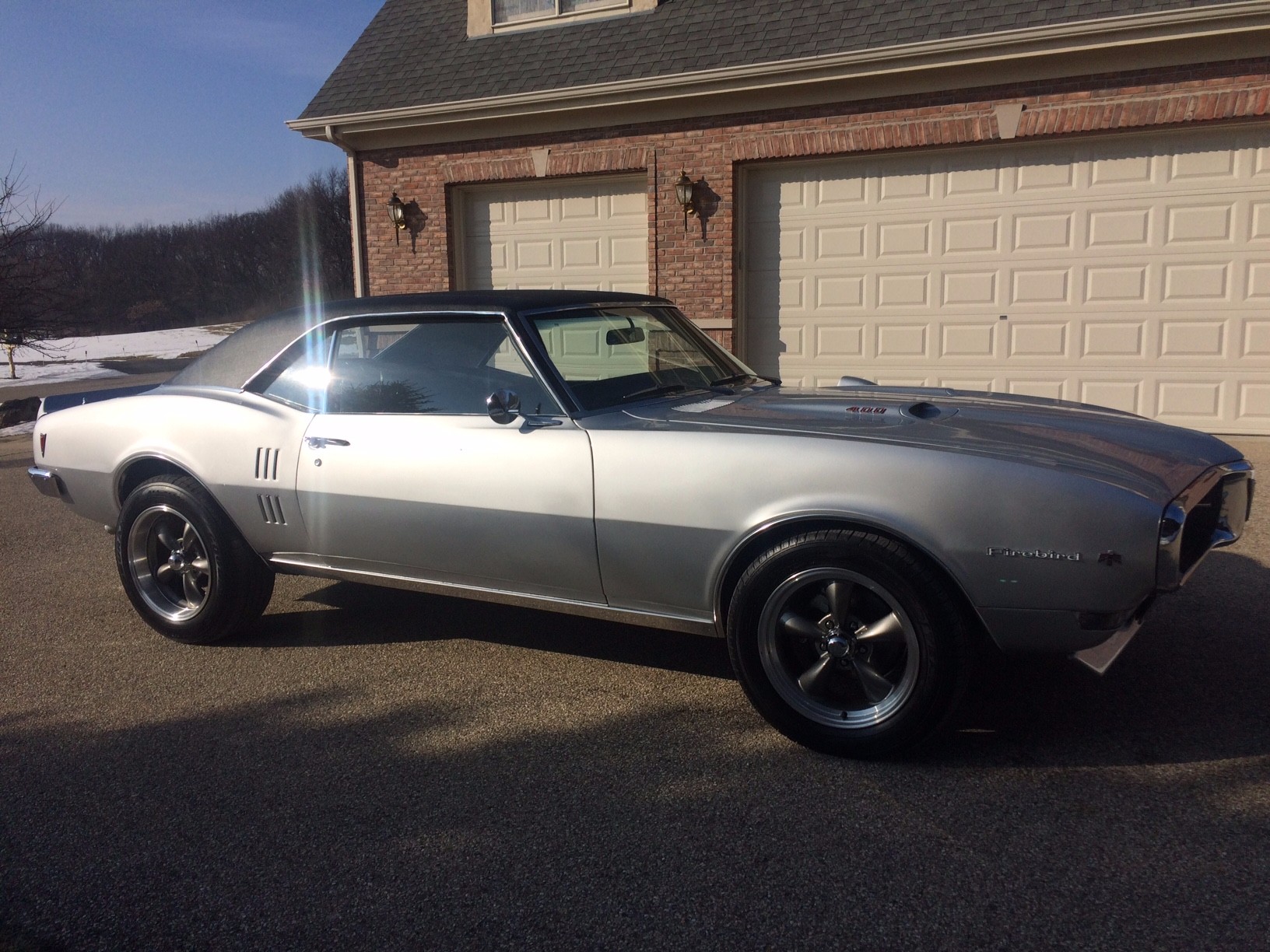 In January I purchased a Palladium Silver 1968 Firebird 400 HO Hardtop. I’ve always wanted a classic muscle car. In high school, I took automotive classes and did simple repair/replacing parts on my family’s cars and trucks, which worked out pretty well. Then I attempted bodywork on my aging Datsun 280ZX, but between the struts and the sheet metal, it was a losing battle. At one point I explored restoring a Mustang and visited a restoration shop. I realized it would be a long time before I could afford such an endeavor. 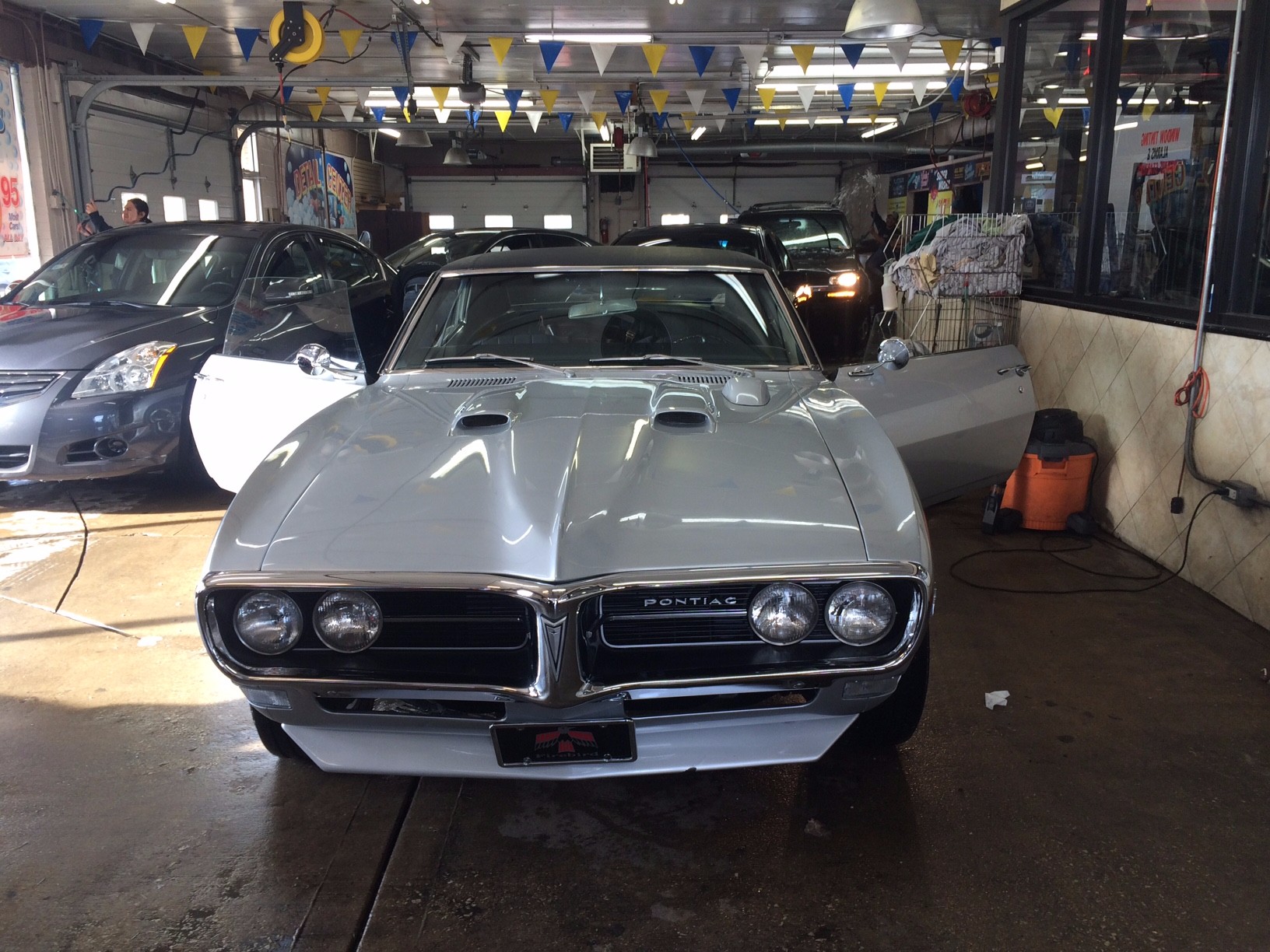 Recently, I came across an old friend restoring a ‘68 Firebird and I realized now is the right time. I own a business in Rockford, 45 miles on straight country roads, and recognized that on the spectrum of safe ways to commute in the summer, a muscle car is safer than a motorcycle. The more I looked at Firebirds I really appreciated the finish on the Firebird. I briefly thought about whether I had the time to restore one and recognized that life is too short to take up that challenge. 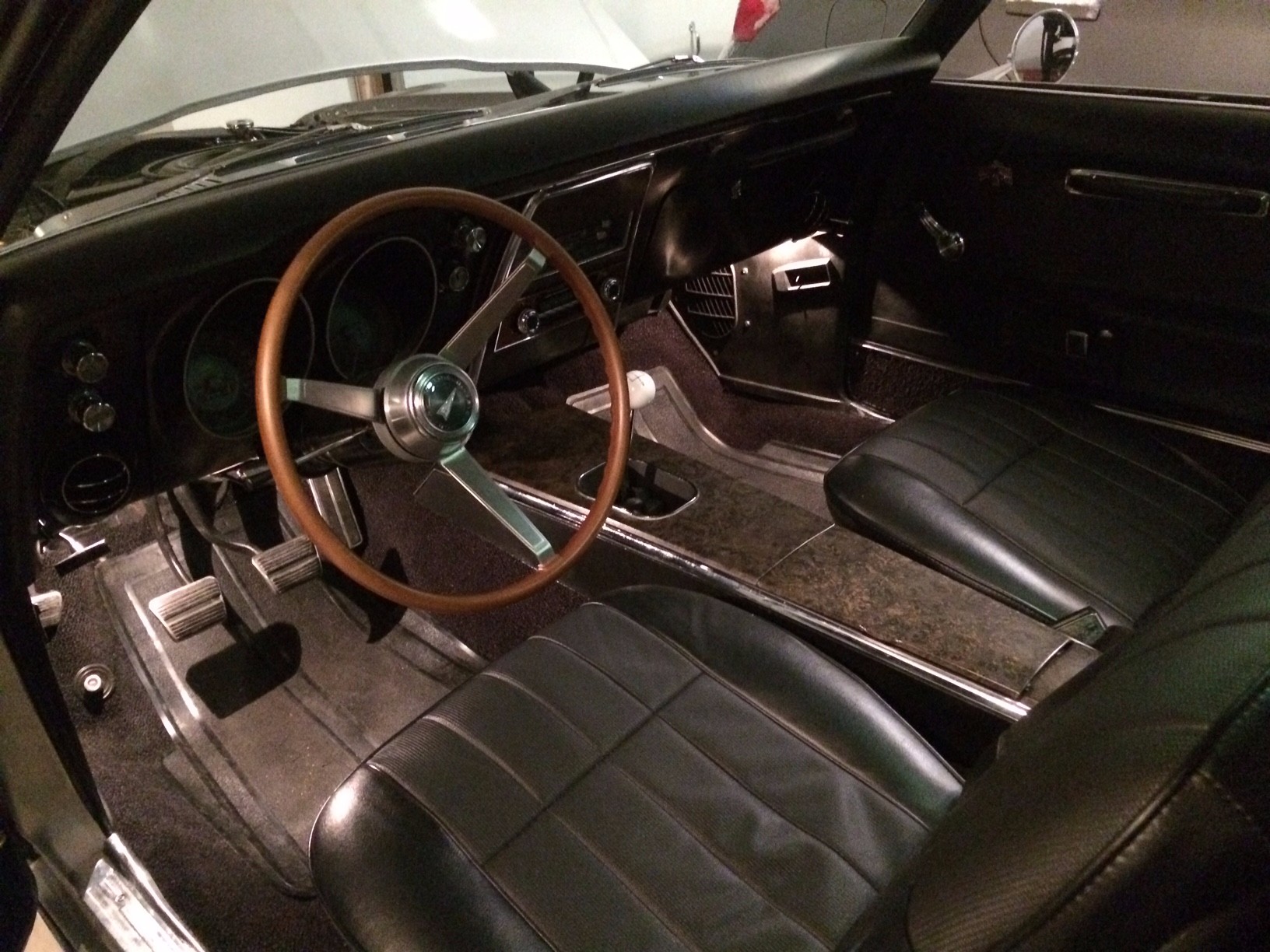 After connecting with Ken in the Midwest Firebird Club I came across a nice ’67 400 locally, but that deal fell through. I then turned my attention on a ’68 in Tennessee. There wasn’t much information on this car; no third party verification and it was poorly marketed. I found a video on the car, and looking at the body plate, VIN, and engine block, I ordered the PHS documentation at 4pm CST. The next morning PHS confirmed the car was in fact a rare, numbers matching 400 HO with a Muncie 4-speed. The original color is also rare, code P (Spring Mist Green) which is Silver with a slight hint of green. When they restored the car they chose a ’69 color Palladium Silver, and I think it looks great in this version. 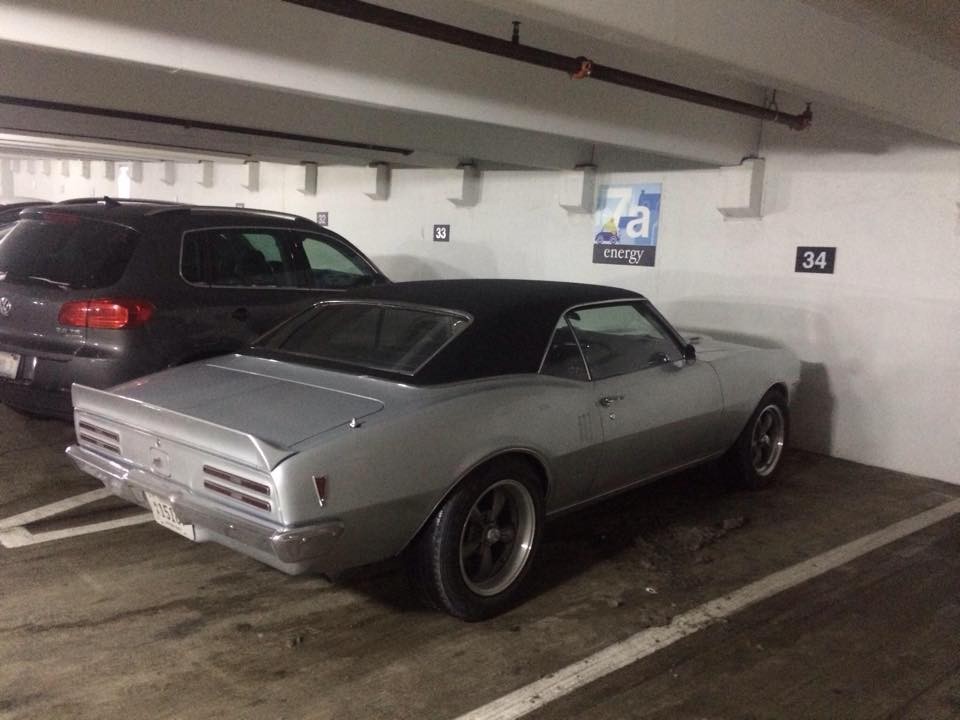 That morning I called the seller, struck a deal, and caught a flight by the afternoon. We met at 10pm and yes, the car had issues that weren’t disclosed, but nothing I could determine that couldn’t reasonably be fixed. So we closed the deal and I was driving it back by 11pm that night, doing 55mph all the way. Yes, perhaps driving an unfamiliar 48 year old car 700 miles may not be the most responsible act, but I like to stress test my machines and the weather was nice. I didn’t have heat that first night, but I had bigger concerns. The dash lights didn’t work, the tach didn’t work, the brakes were manual and in pretty poor shape, and every time I hit a hump on the highway I could hear the rear 17×10 inch wheels rubbing. Yes, 17×10. I was prepared to rent a truck and haul it the rest of the way. I pulled into Nashville around 2 in the morning; it was 27 degrees. Who knew it got that cold in Nashville? 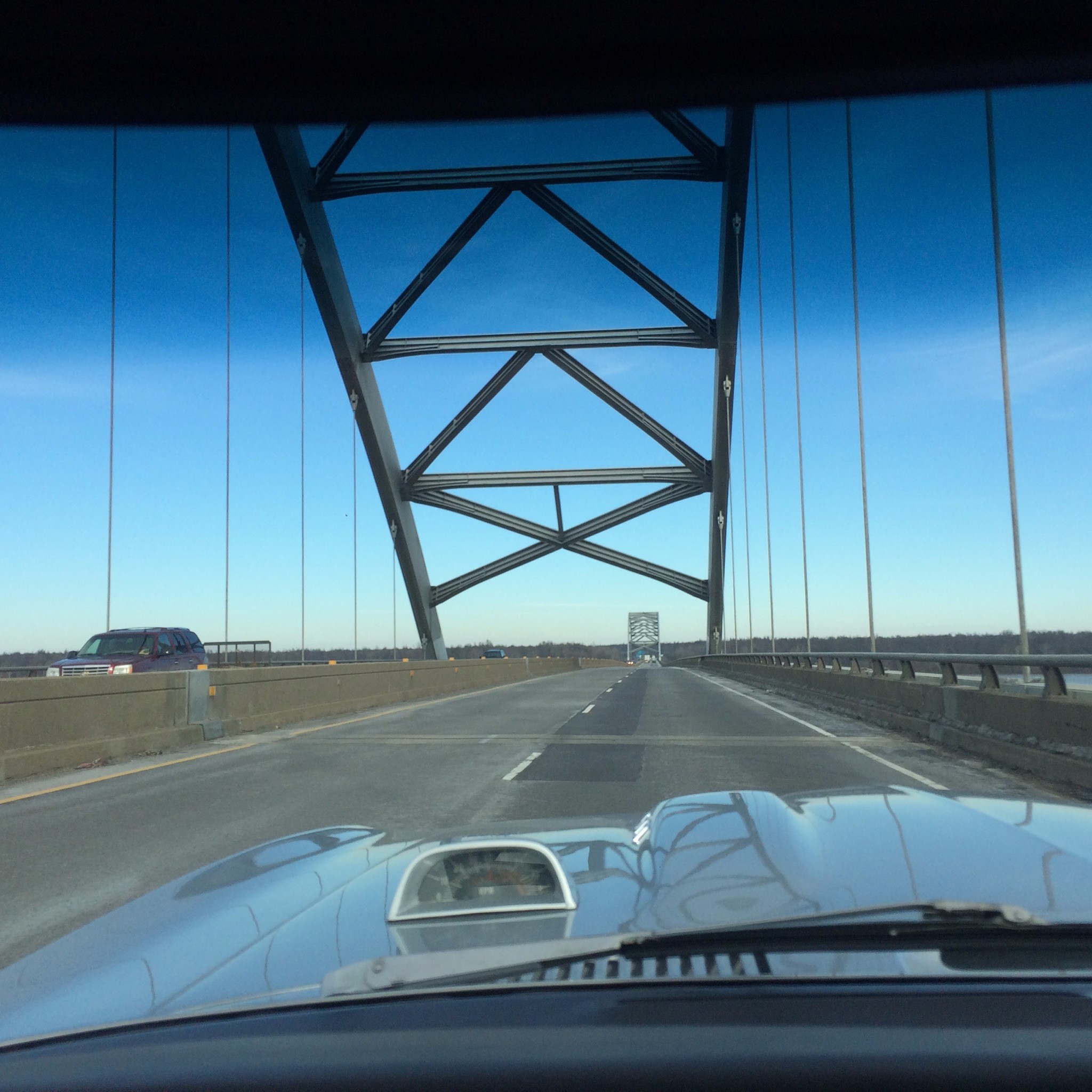 The next morning, 100 miles out of town, I ran out of gas. My first thought, I blew the engine. Nope, fuel filter was dry. Broken gauge, or bad ground, or something. I called the Kentucky highway safety patrol, they gave me a few gallons and of course, took photos of the car, and then I was again on my way. The day was a constant pattern of filling up, meeting someone at every gas station who had one of these back in the day or wanted one now, and checking the weather reports for clear weather in an attempt to make it to Chicago. 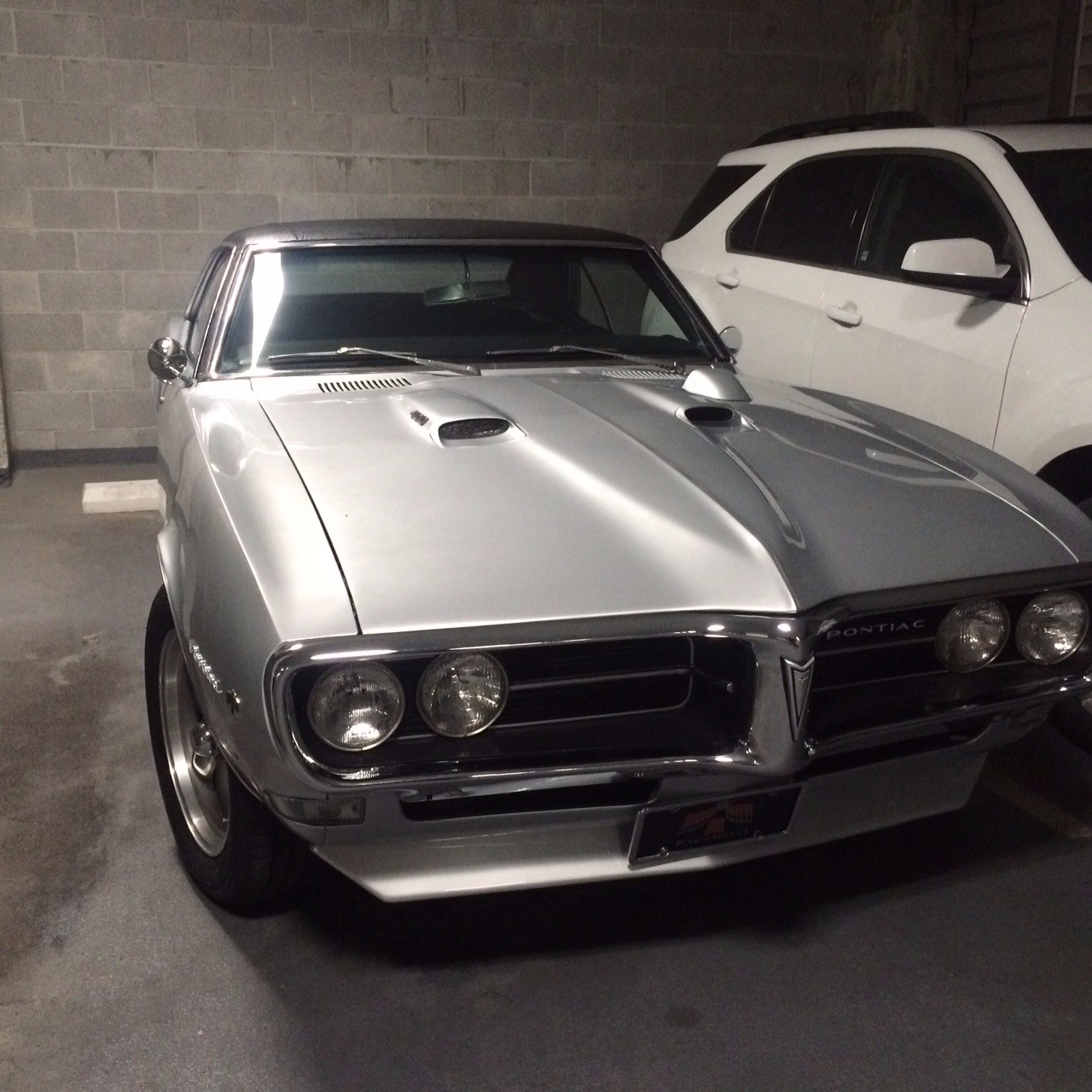 In Effingham I pulled into a Napa to fix the thermostat, only to discover – there was no thermostat! After installing a new one I was on my way with heat! Hitting Champaign, where I went to school, was like reaching a point of no return. It was 6pm, dark, and a light mist was falling, but Chicago was within shouting distance and there was no way I was going to leave this car in a hotel parking lot in Champaign. I made it downtown by 9pm. The next morning I handed it off to Dave Armstrong of PMD Performance Restorations and member of our club, to go over the car with a fine tooth comb and put the Firebird in the best mechanical condition. 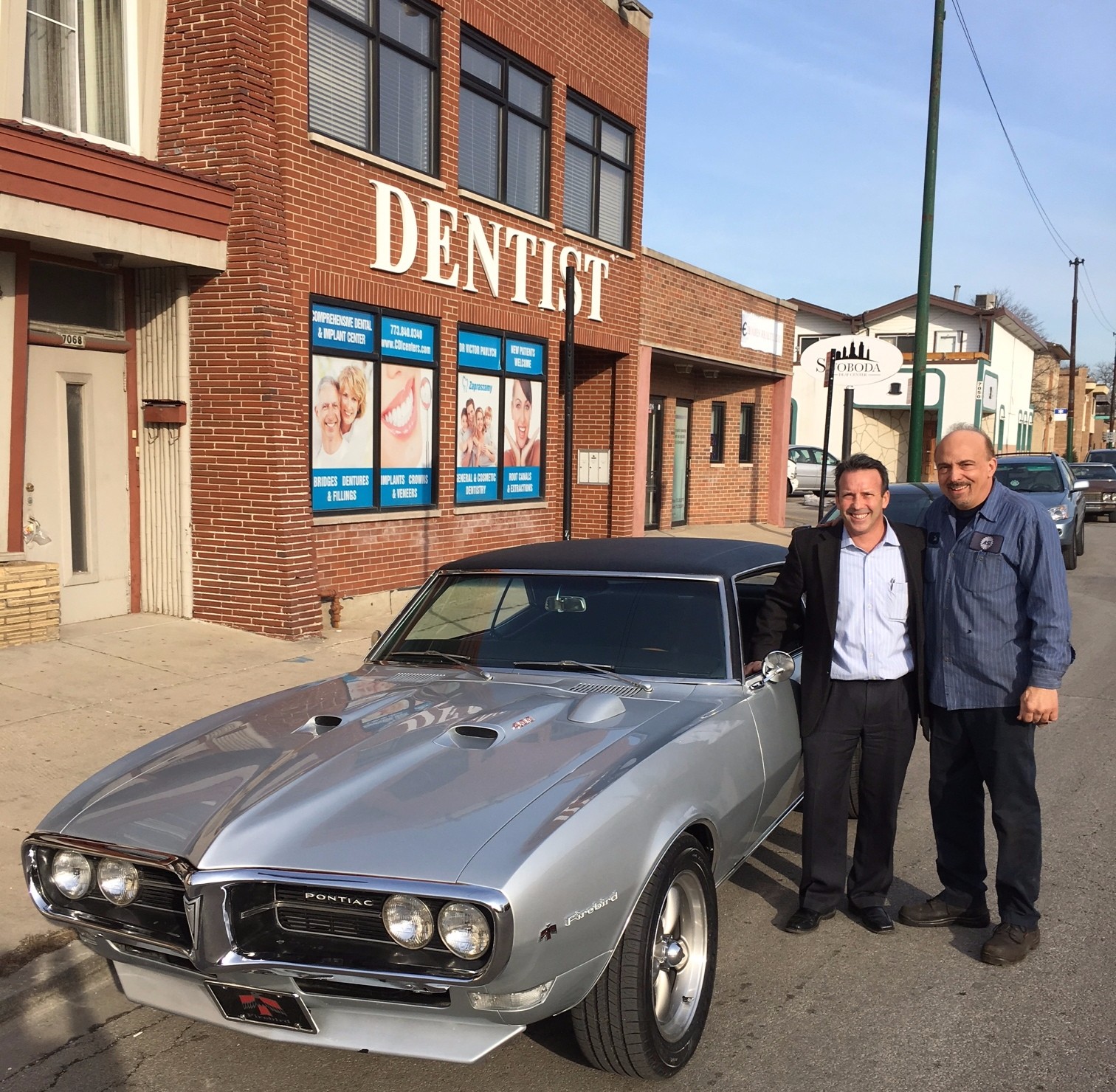 Mark seen here with our own Dave Armstrong – the Pontiac Doctor, from PMD Performance Restorations.

Now that the brakes, horn & dash lights work properly and the engine is back in working order, I am replacing the neck connector for the gas tank to see if that fixes that “gas filling” problem. I need to color match, paint and install the new hood tach, fix the heater fan lever that broke, and install seat belts in the rear and shoulder restraints on the front. Maybe I’ll add vintage air if it gets too hot in the summer. I also plan on changing out those 17 inch wheels for the correct 15 inch Rally II wheels I just received from Ames. Please let me know if anyone knows someone wanting a brand new set of 17 torque thrust 2 wheels and tires that have only 700 miles on them. 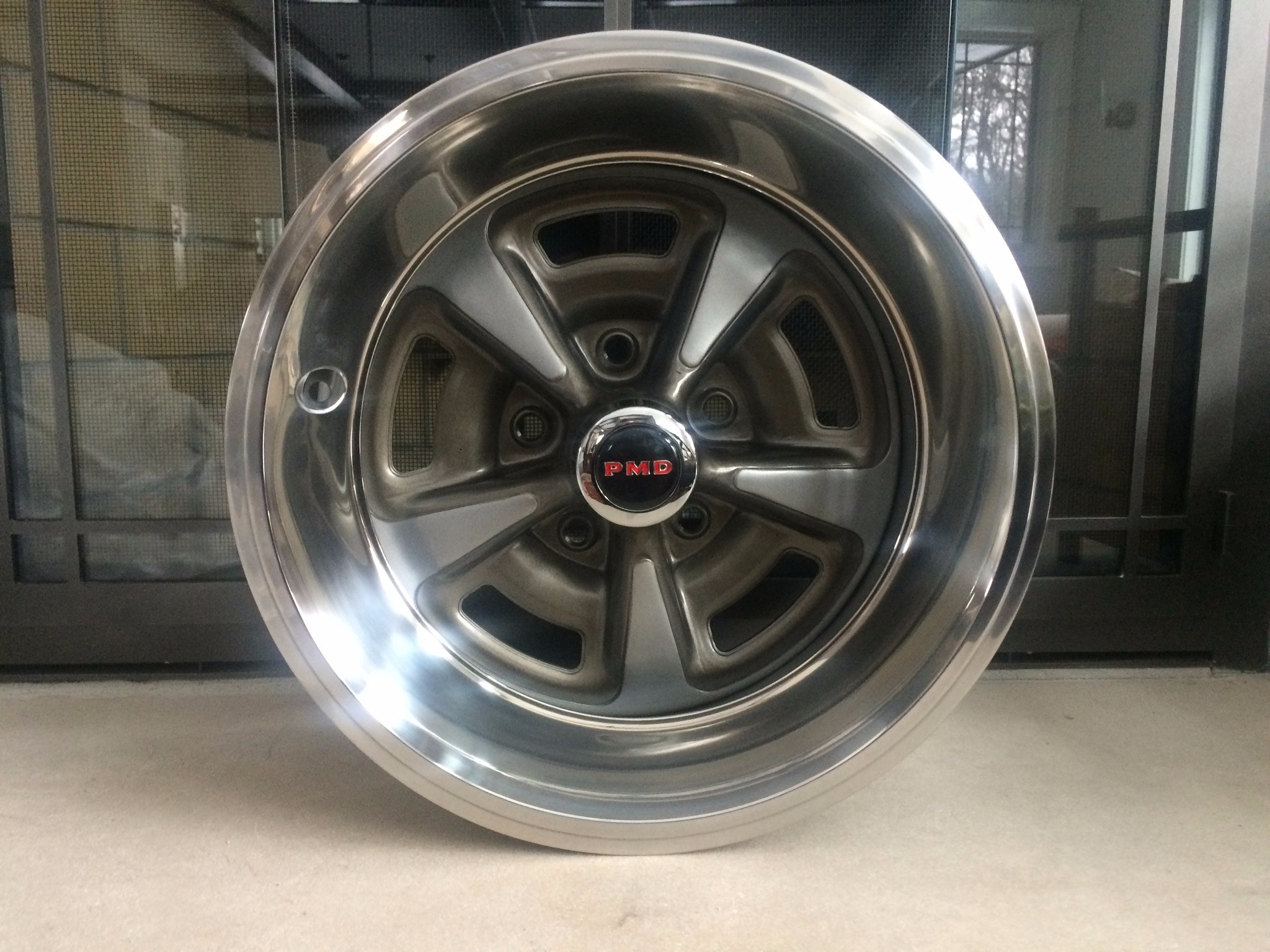 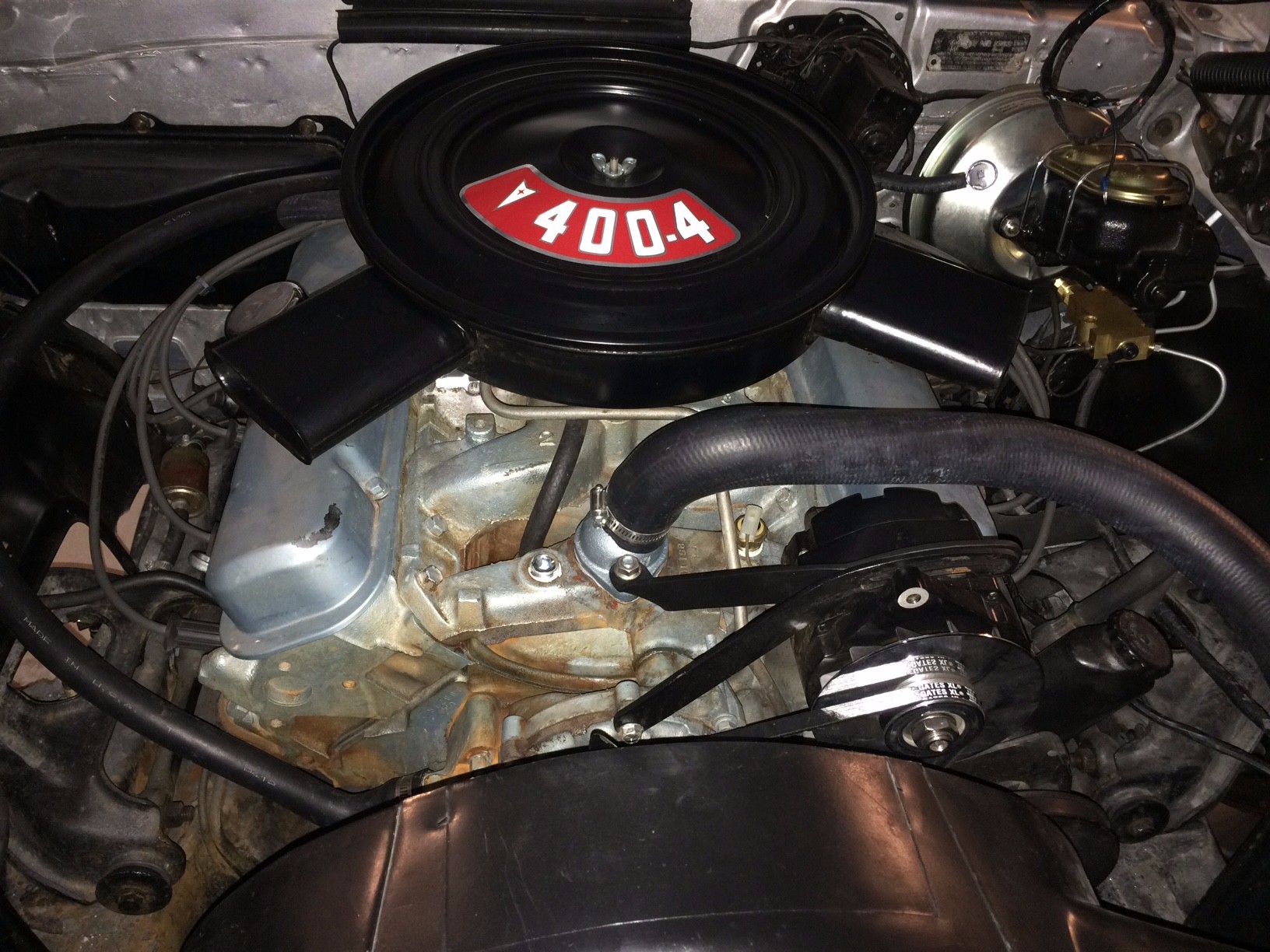 Realizing there are a few items that need his attention under the hood, like the dual snorkel air cleaner, Mark will be doing tweeks here and there to give this ‘bird his personal touch. 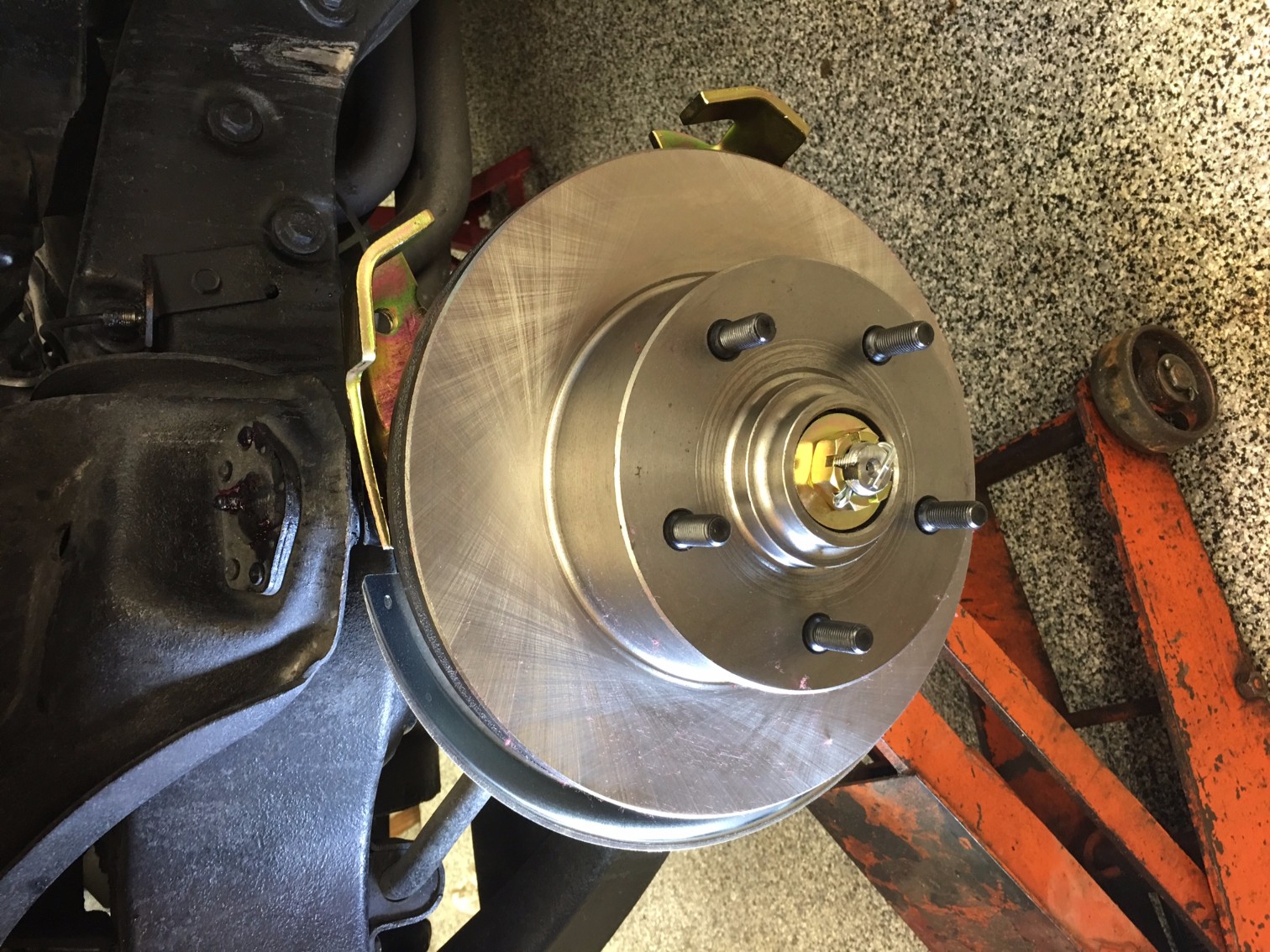 And for better stopping of that high performance engine, Mark opted for a front disc brake conversion. 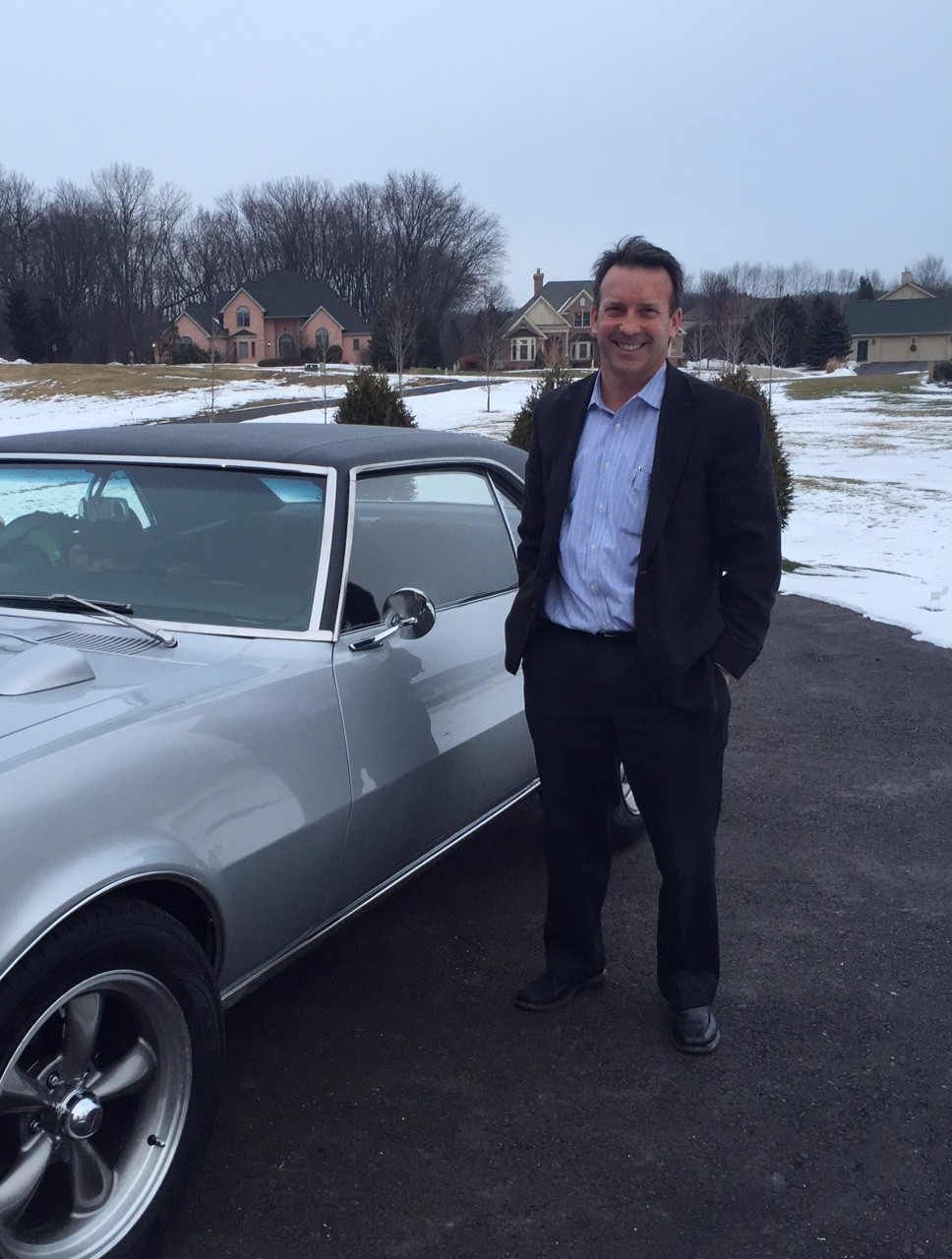 Mark can’t wait to join us on our next cruise with his new pride and joy!

I was grateful to have made the trek and have a new appreciation for this 48 year old engine and transmission. After making it on that long trip back from Tennessee, I’m sure my new Firebird can handle my commute to work in the summer and trips around town! Also, a special thank you to Ken and Dave for taking so much time to help me understand and appreciate the nuances of the different years and models of the first generation Firebirds. My learning curve was greatly accelerated by our discussions and I hope it was entertaining for them as is has been for me!