Paul Gundberg’s custom-color, 1968 400 coupe is an outstanding example of building a high-powered Pontiac with modern handling and comfort.  Paul has been one of the most active members of our club from very early in our beginnings. 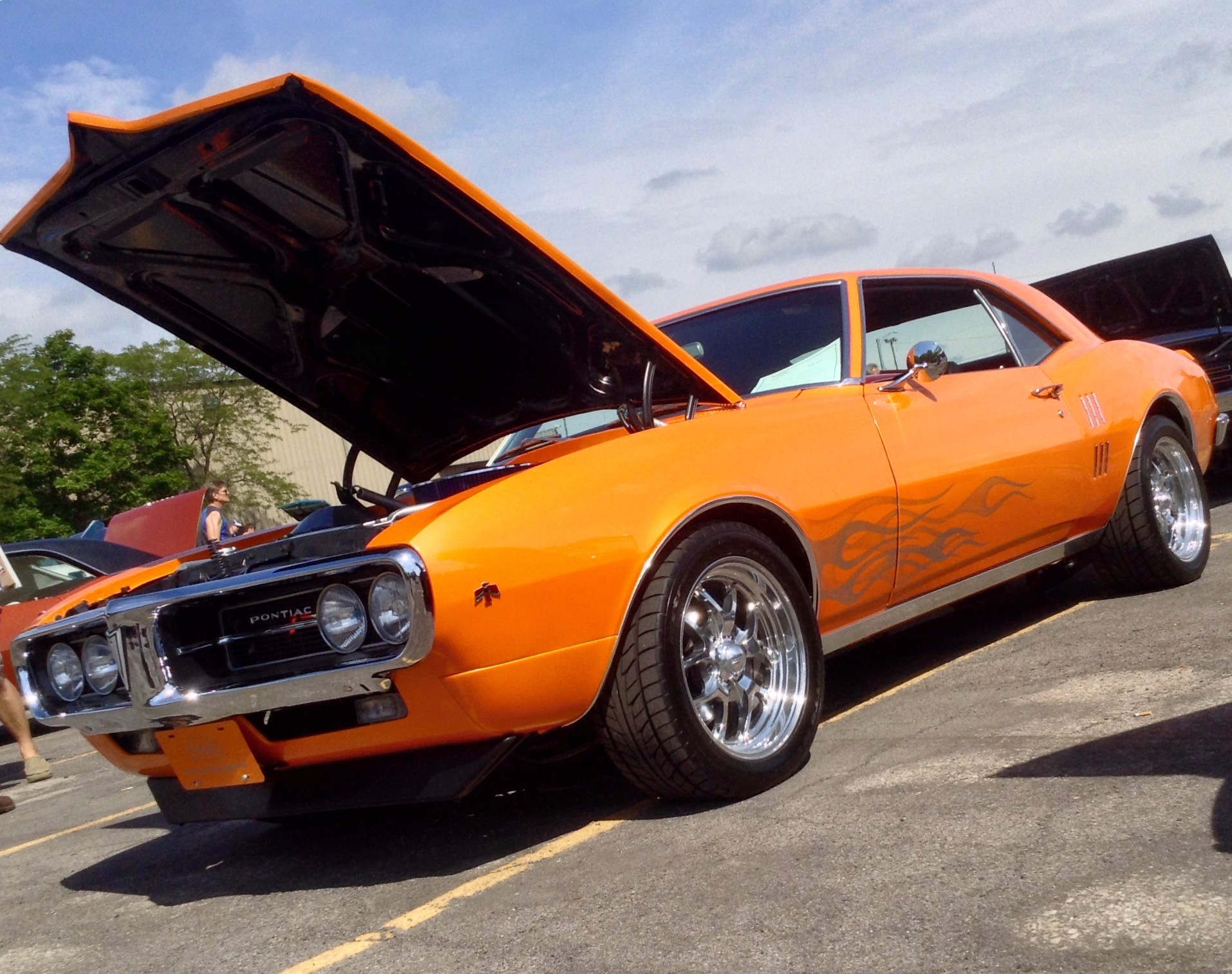 He is always willing and ready to drive this beautiful show-bird to any and all of our events, never shying away from a little rain or distance to make the trip. He is also a frequent contributor whenever anyone has a technical question about Firebirds or building a restomod beast like his. What I quickly found out about Paul’s Firebird is that EVERYONE loves it, and it wins just about every show it enters! I asked Paul to give us some of the background on what went into his car and what it was like before he transformed it into the curve-hugging fireball it is today. 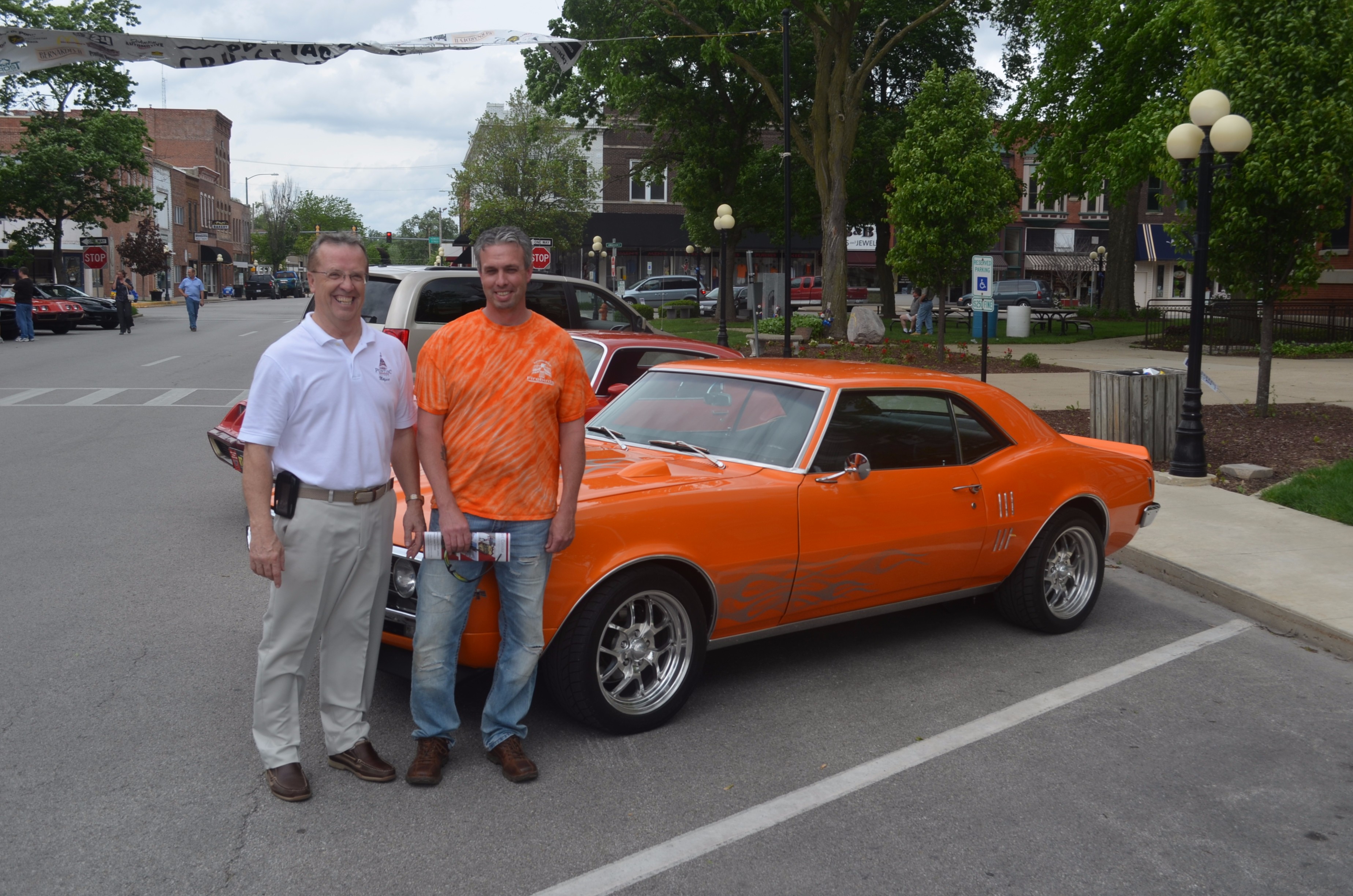 Seen here with Pontiac Illinois Mayor, Bob Russell. Paul won the Mayor’s Choice trophy at the All Firebird and Trans Am Day at the Museum in 2015. 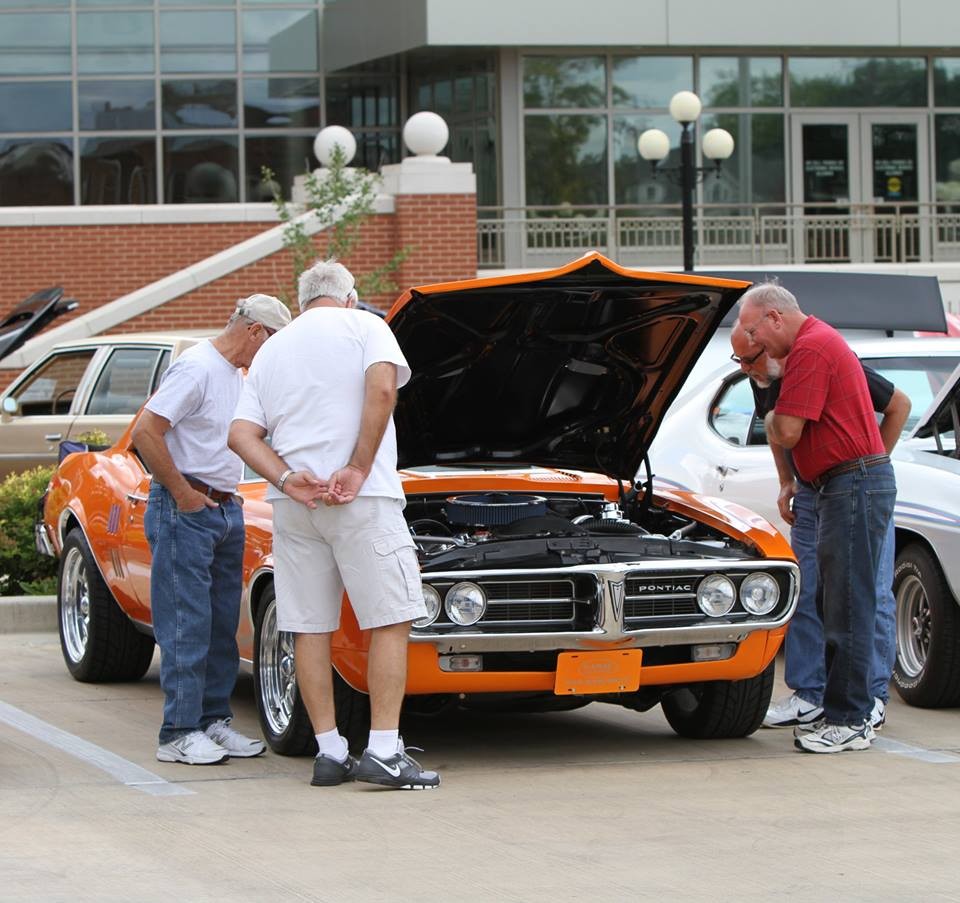 Tim Dye snapped this photo of some of the “Old School” Pontiac guys admiring Pauls engine treatment while at the GTOAA show in late September of 2014. 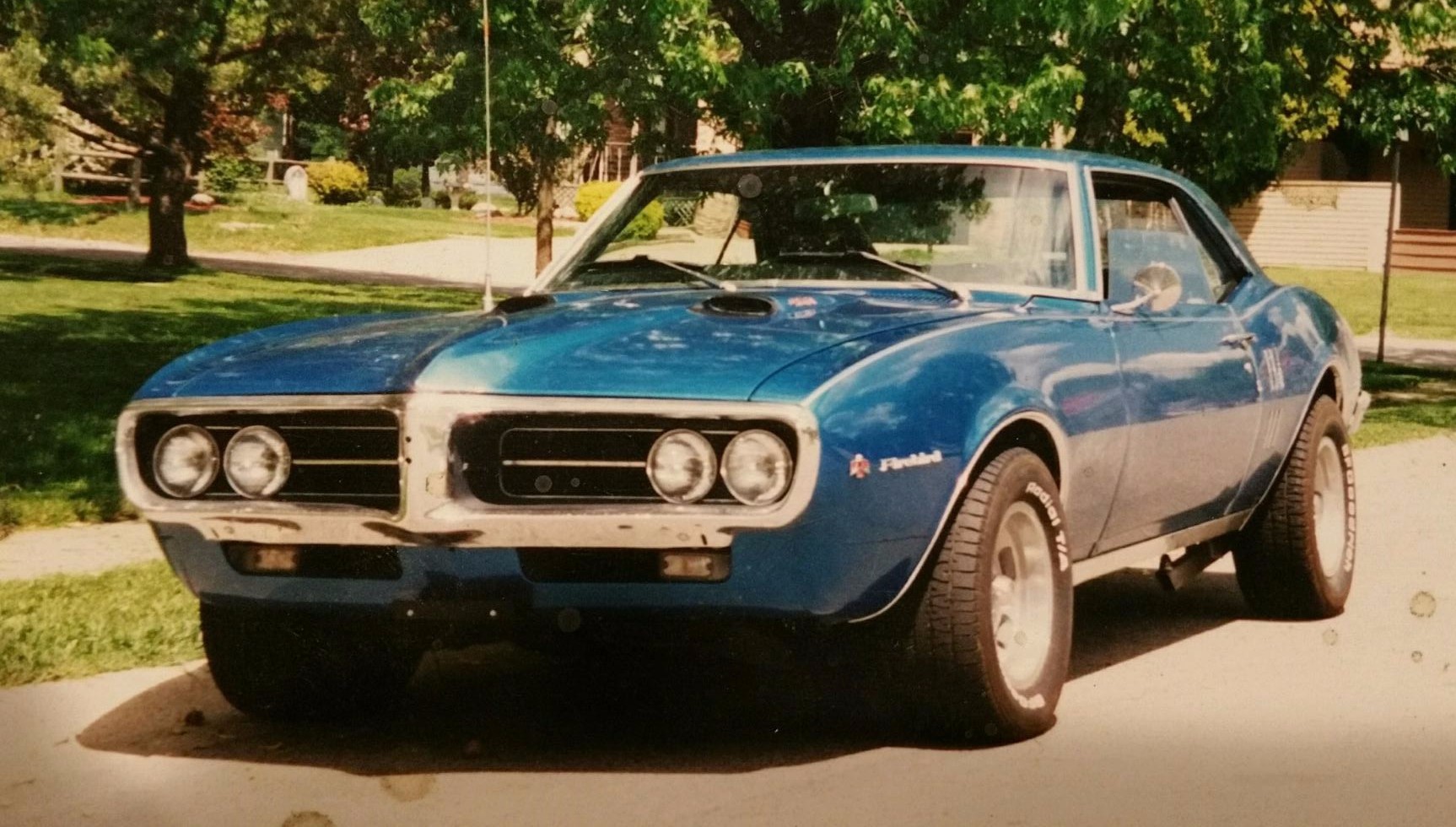 Before the restoration – Paul told us not to let the picture fool you, it was really rotting badly under the paint. He also said the front bumper was in terrible shape, but he saved it and had it re-chromed.

“Here’s some of my back-story not too many people know about. When I was 12, I was in my Dad’s car a ‘72 Cutlass Supreme when he raced a 1968 Firebird. After the race, I asked my Dad what kind of car that was that just spanked us? When he told me it was a ’68 Firebird, I knew I had to have one someday! My first car at the age of 18 was a 1988 formula with t-tops, and a 305. It wasn’t fast, but it handled like a Corvette. Although, I knew I still wanted to get a first-gen Firebird.”

Lake Delavan WIsconsin’s “The Cars Time Forgot” show at Lake Lawn Lodge, has become one of our favorites. From July of 2015 – Pauls car took home a first place award three years in a row at this event.

This show-bird has been a nice catch for Paul, netting trophy after trophy. 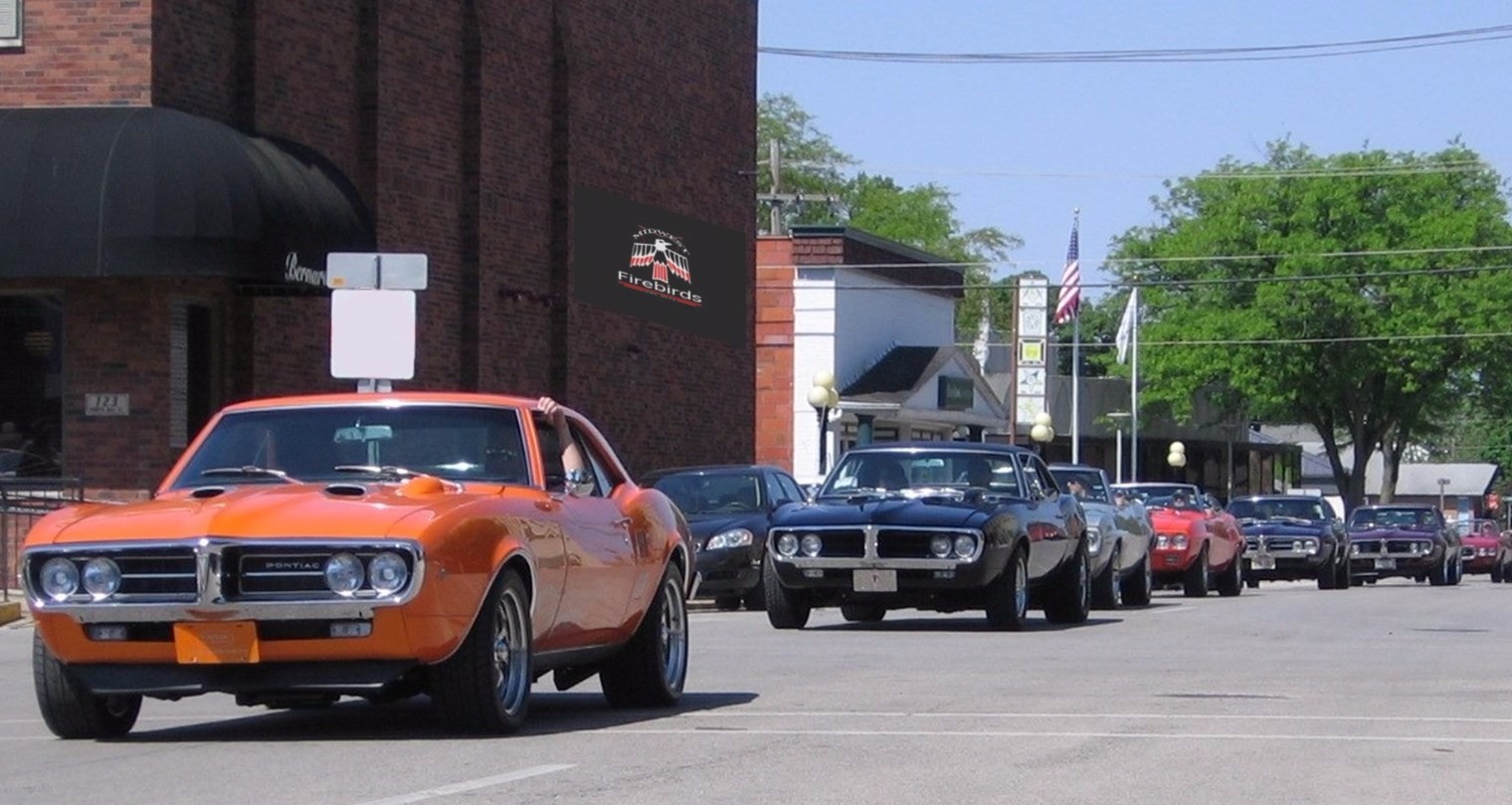 Firebird Day at the Museum, May 2016 was a big success.  A group of 14 first gen Firebirds cruised into Pontiac, with Paul leading the pack.  Check out our You-Tube channel for a video of this Pontiac parade. 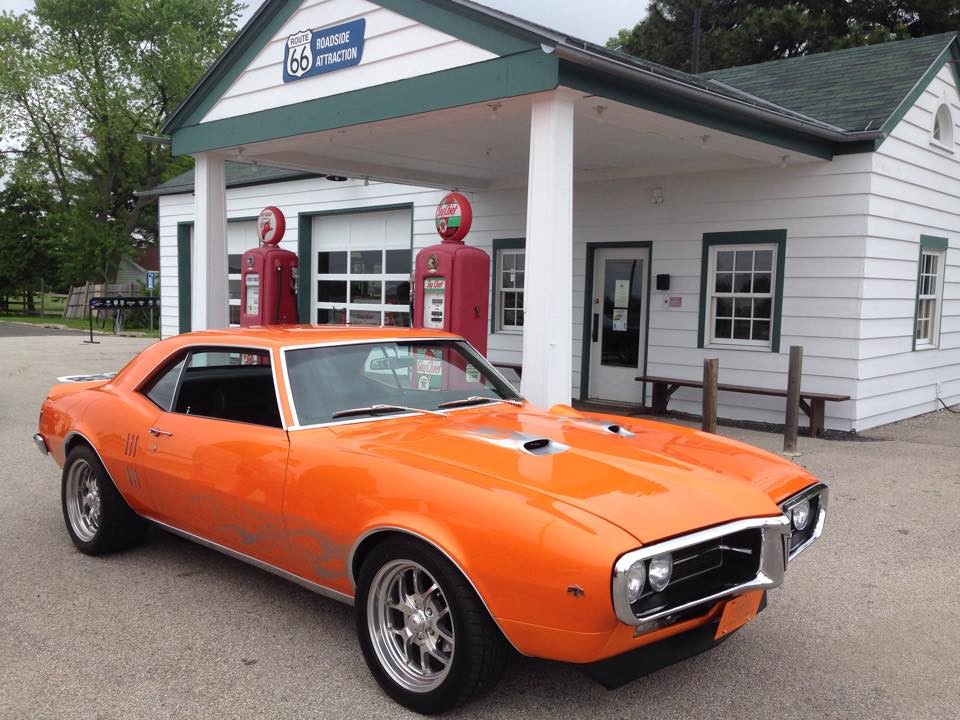 Get your kicks on Route 66! This is the historic Texaco gas station in Dwight, Illinois. 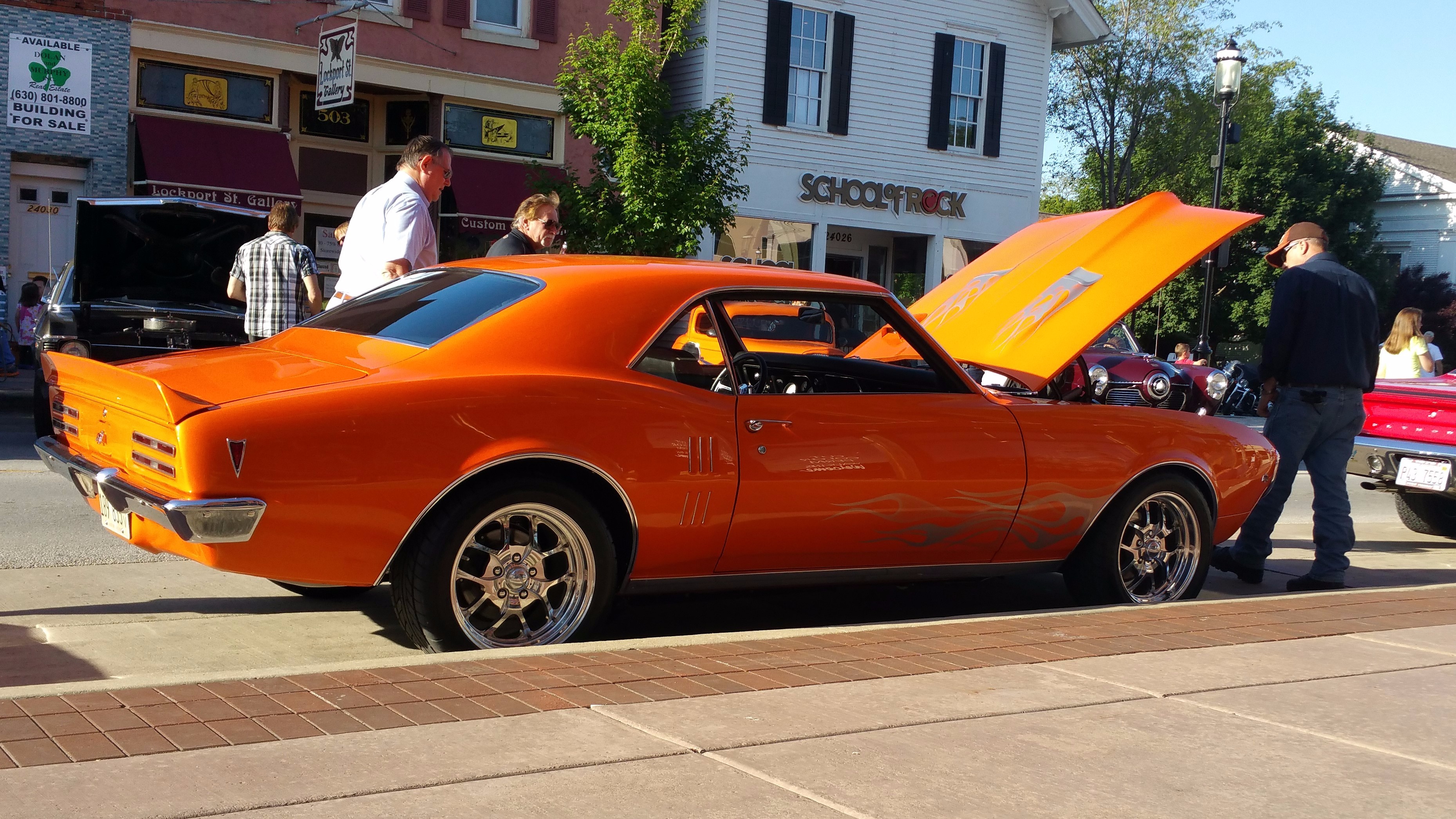 This car draws a lot of attention everywhere it goes – here it’s at a street show in Plainfield.

After learning so much about first gens, Paul determined that the car is actually a combination of a ‘67 that was rear ended, and a ‘68 that was damaged. The motor is a YS code ‘68 block, with ’68 multi-leaf springs, but ’67 factory traction bars. You will also notice it has ‘68 doors with the Firebird etched in the glass, but a ‘67 front lower valance. Keeping with a clean restomod look, he finished the car by removing the “Firebird” script from the front fenders. 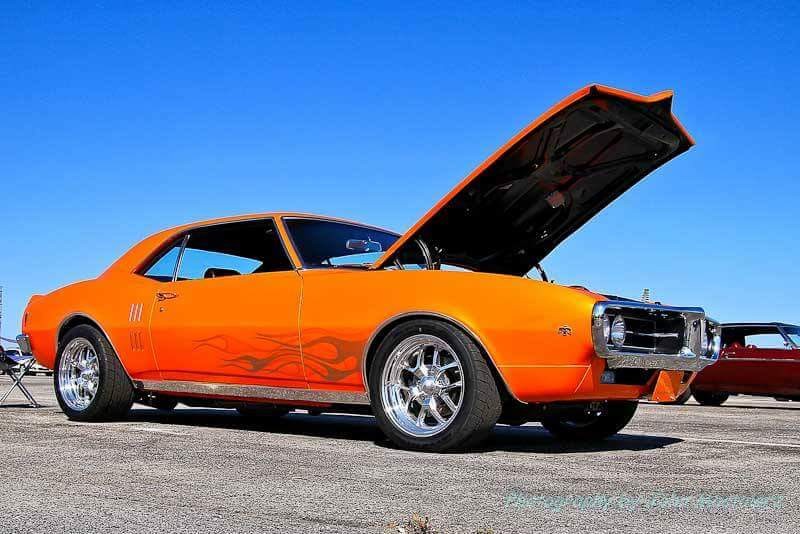 A thing of beauty – massive tires fill the wheel wells, and the custom Orange paint is so striking against a crisp blue sky.

Paul told us; “To start the project, I disassembled it completely in my one-car garage. The motor went to Book Racing to be bored .030 over and fitted with forged pistons, and the sub-frame went out for a thorough sandblasting and painting. It was a long term project, as I bought parts for many years, while it kind of sat. I even moved into a larger house and had to move the project in a million pieces.” 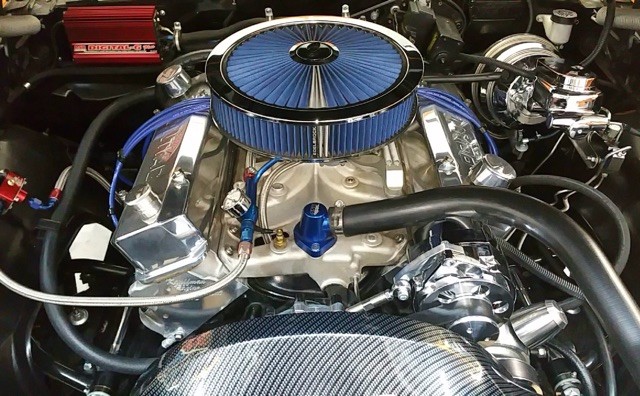 Paul’s always tinkering with the look and performance of the car.  This was taken after a new cam and Kauffman racing heads were installed this year. 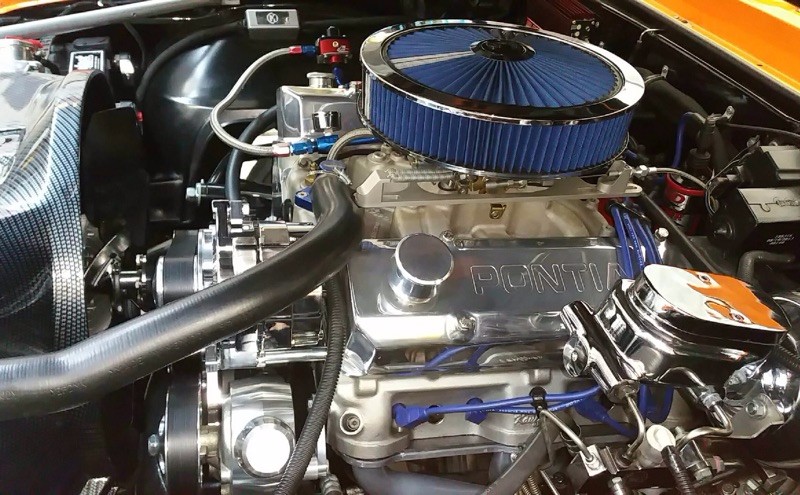 Here’s a great view of the Serpentine Belt and cool graphite fan shroud, among other custom goodies.

Continuing with the engine, he went with H beam connecting rods, a 4-bolt main, hydraulic roller cam .560/560, roller rockers, aluminum Kauffman racing heads, Edelbrock intake topped off with a Holley 670 cfm carb. fed by an electric fuel pump. You may notice the custom fabricated aluminum valve covers (polished) and a serpentine conversion kit, giving the engine a unique look. The rumble exits via Hookers headers and a 2.5 inch exhaust. Paul replaced the stock Muncie 4-speed with a Tremec 6-speed T56, which turns an aluminum driveshaft into a 4:11 posi rear end. 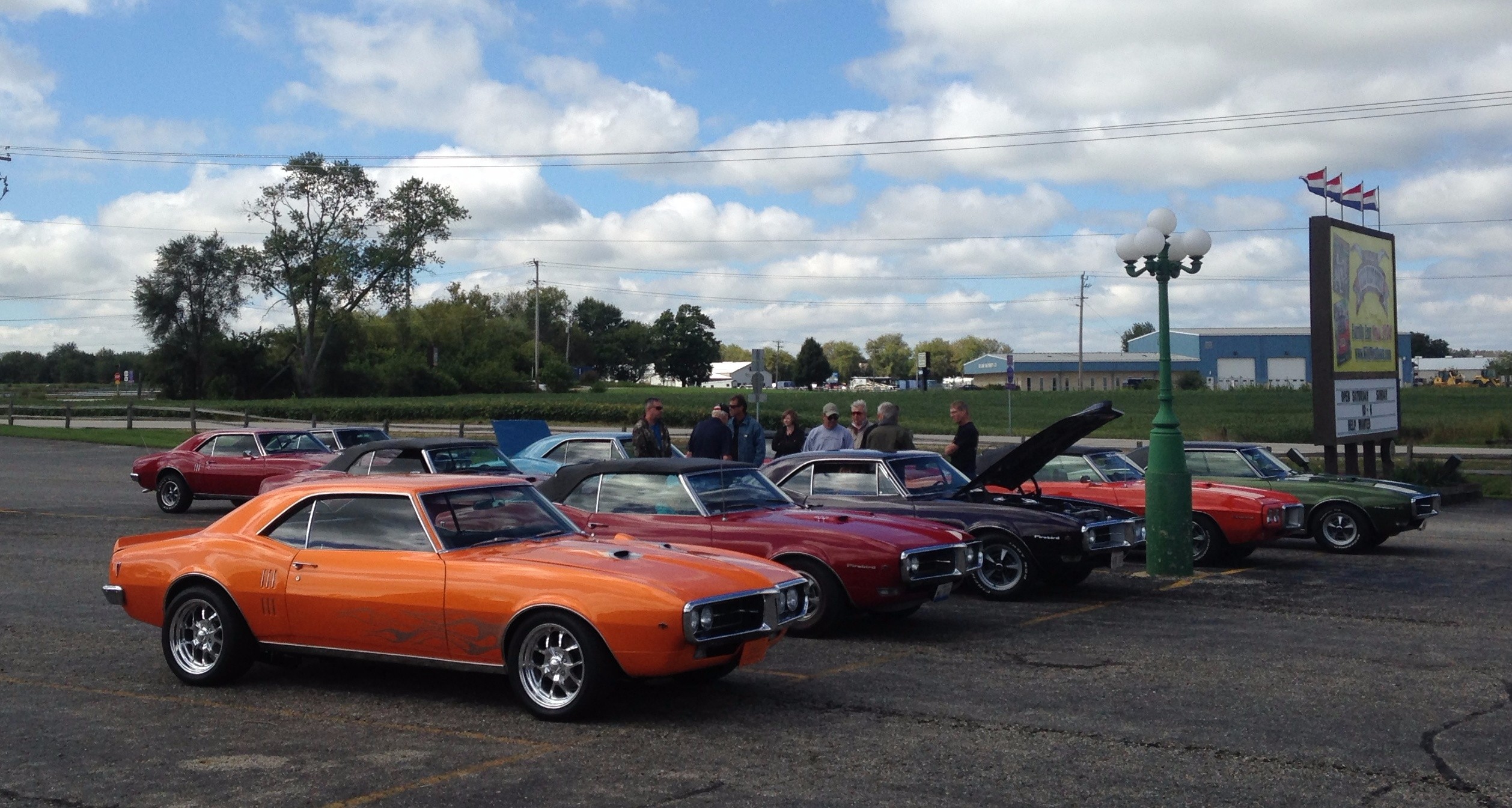 Everyone seems to like how active our club is, expecially in the cruises we take. We enjoy getting our cars out and driving them, and Paul’s Firebird is usually with us, like here in September of 2014 for our Cruise in the Country. 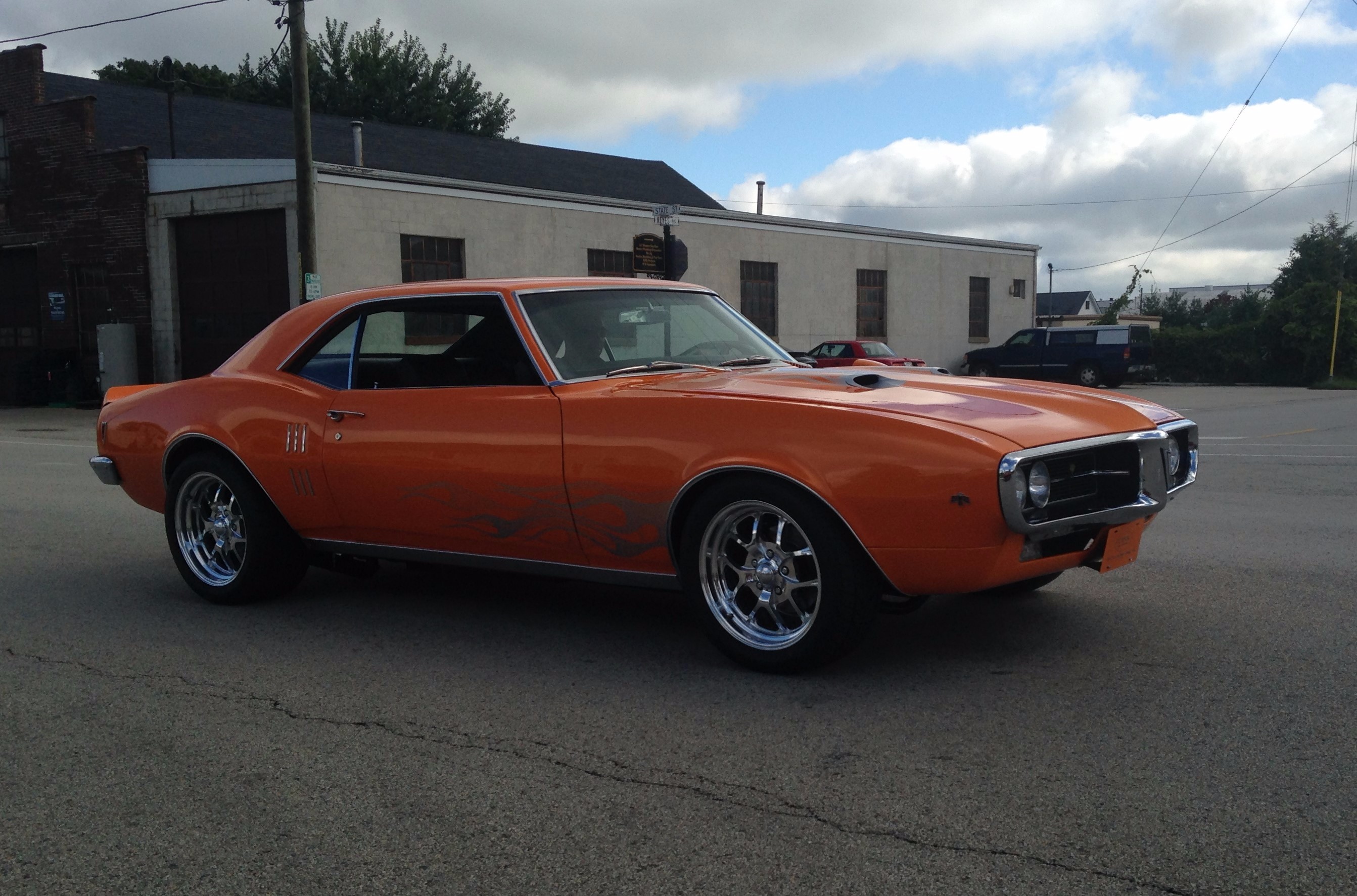 Leaving Getz Hot Rod Shop on one of our shop-tour club cruises.

To keep all that Pontiac power under control, Paul installed sub-frame connectors and did a 4-wheel disc brake conversion. He upgraded the suspension with tubular A-arms, and QA-1 coil over shocks, and lowered it two inches in the front and one and a half in the back. The wheels are made by Centerline, 17 x 8 front and 17 x 10.5 in back, with Nito 555 tires bringing the horses to the pavement – sized 245/45/17 front and 275/40/17 in back. 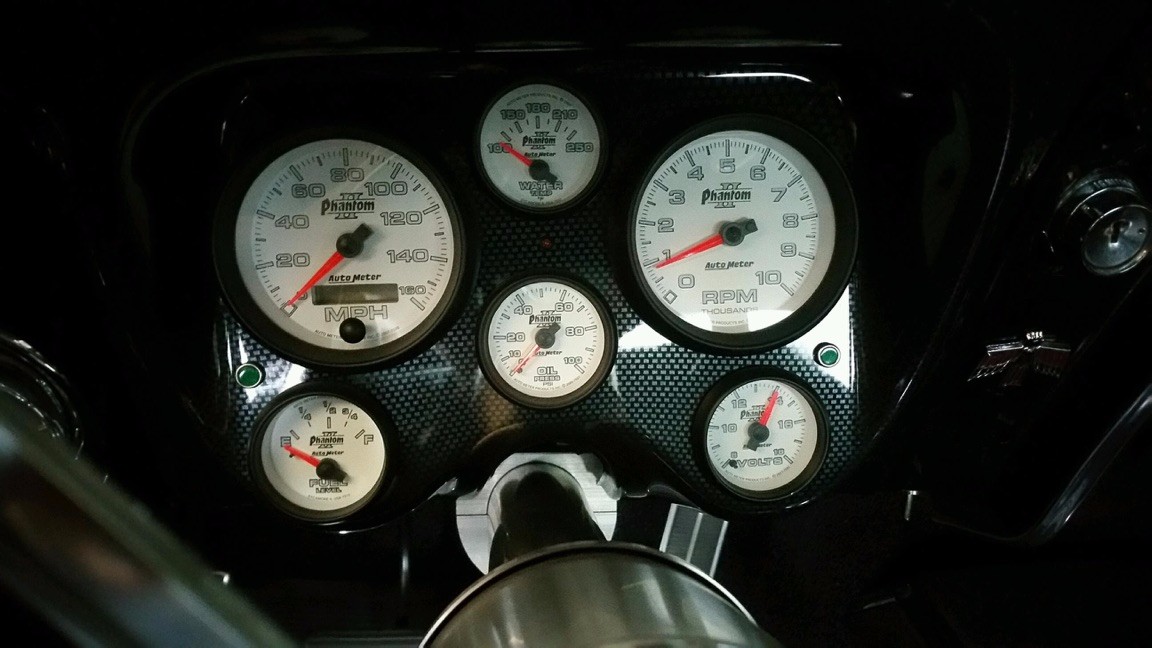 These Phantom guages change color at night for high visability at all times. Notice the use of black graphite here matching the fan shroud in the engine compartment. 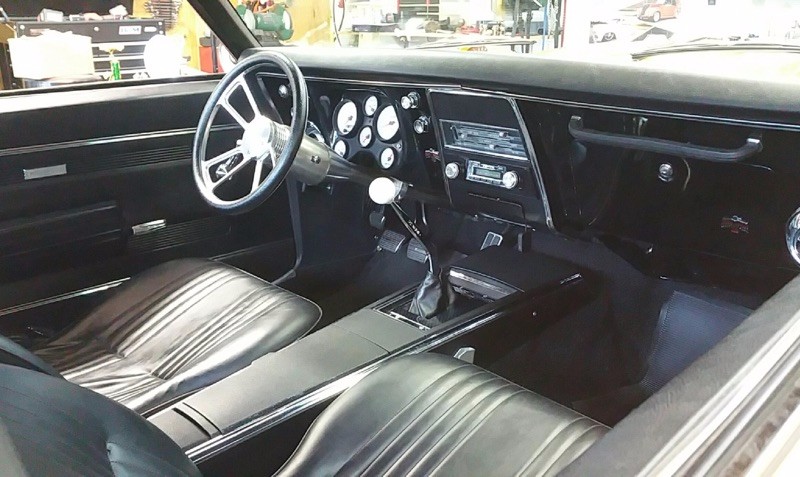 A comfortable cockpit, but still all business for this 400 plus horsepower street machine. 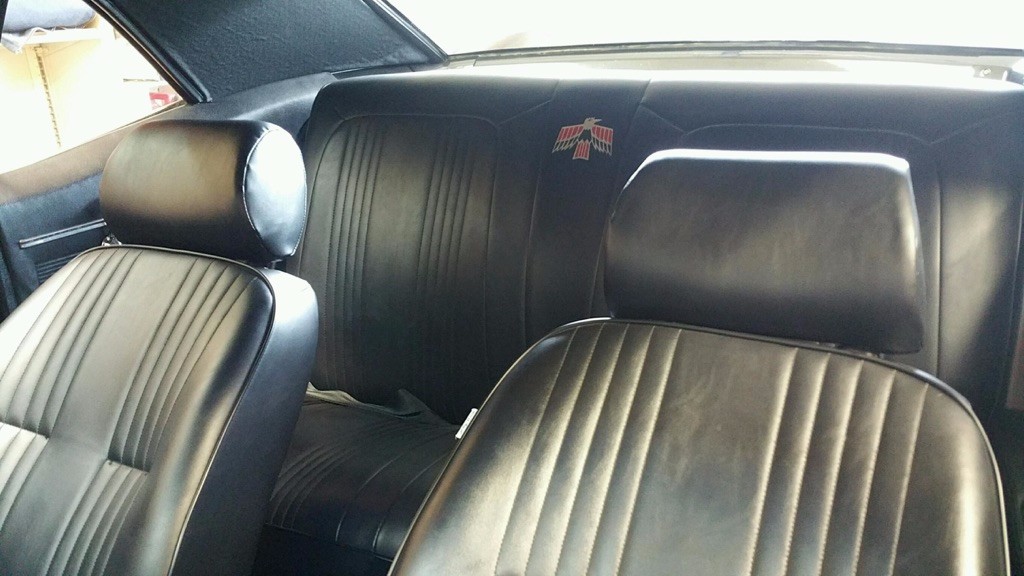 The interior is also loaded with custom features and creature comforts starting with a metal flake painted dash, all new wiring and a complete set of custom Phantom gauges. The 6-speed shifter sits in a factory ’67 console between two very comfortable leather front seats by Procar. A nice custom touch on the rear seat is a cool custom embroidered first gen Firebird insignia. 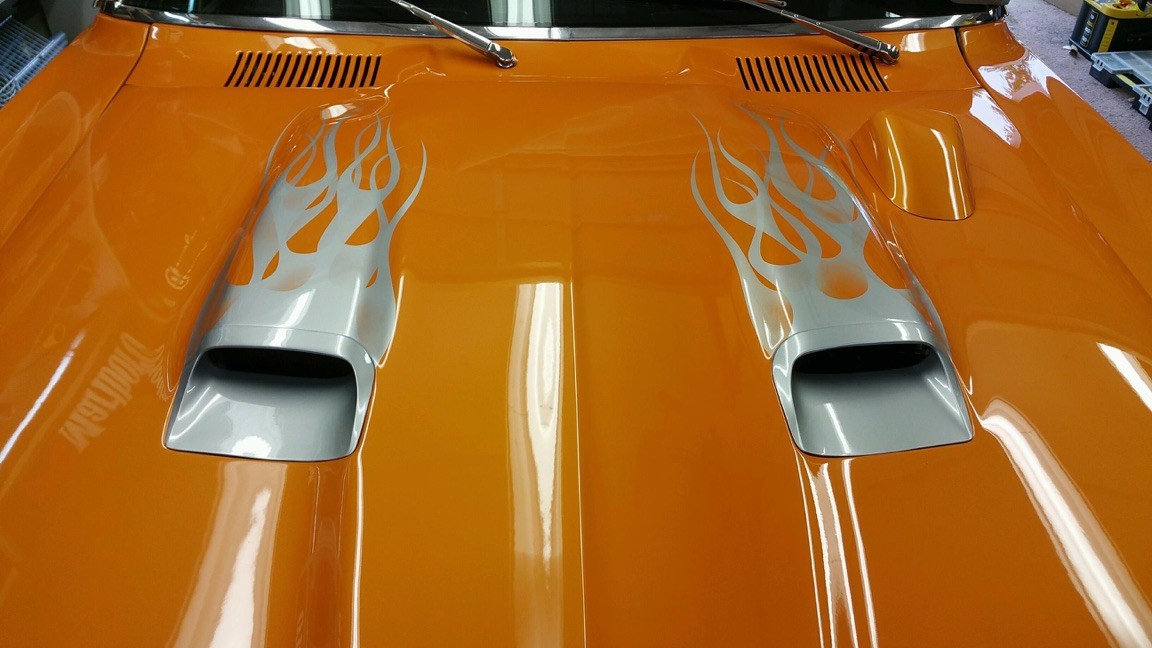 A close-up of the Silver flames on the open hood scoops. 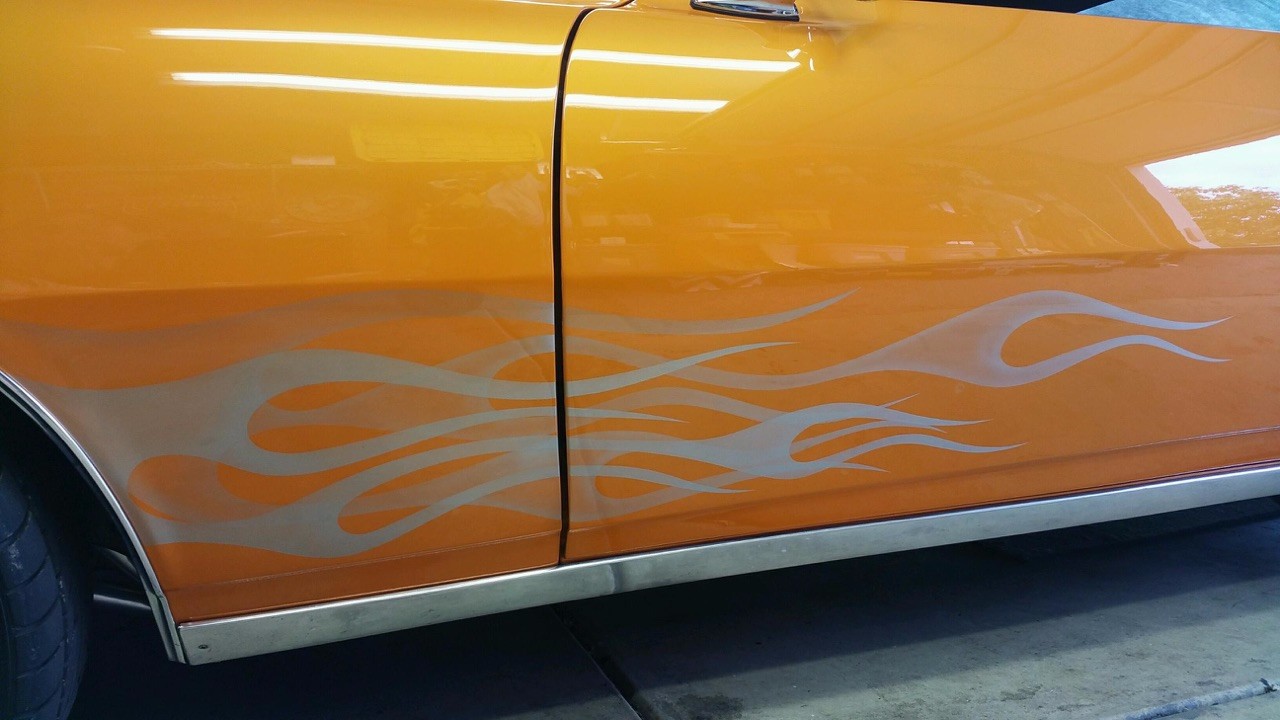 More ghost flames on the side of the car, make this custom paint job even more eye-catching!

“In 2013 I took it to Canal Auto Rebuilders in Lockport for the professional paint you see on it now, and I started driving to shows. The paint is House of Kolors, Sunset Pearl mixed w Tangelo. The silver ghost-flames are also House of Kolors Pearl Silver.” 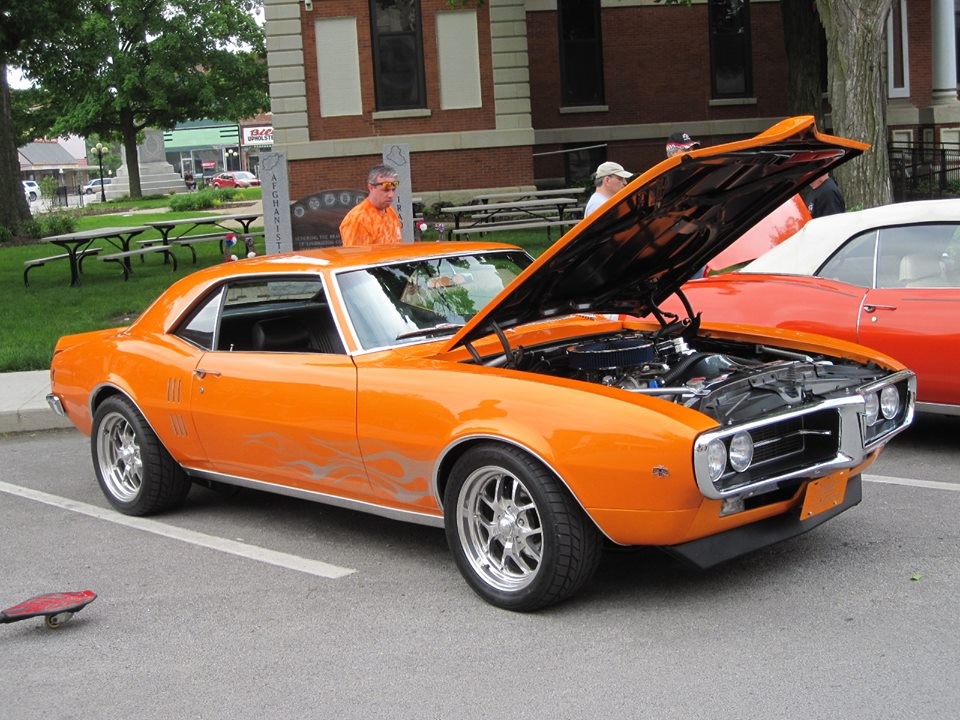 Even with the considerable investment in time and money in this custom pavement pounder, we love how Paul gets out and drives it with his wife Kelly to so many of our shows and cruises! 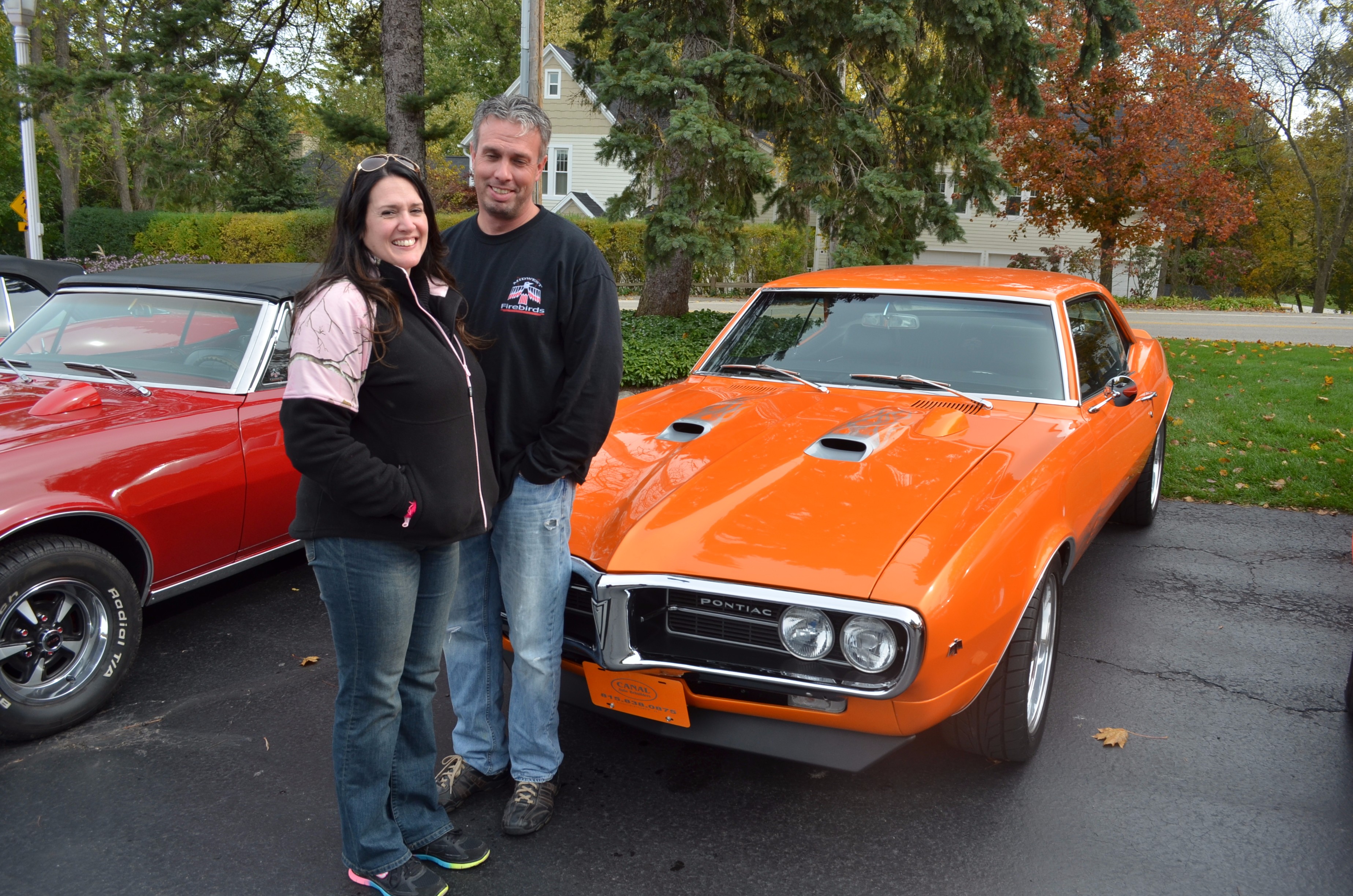 Paul and wife Kelly at our 2014 Fall Colors Cruise to Lake Geneva Wisconsin. Paul told us that Kelly has her eye on purchasing a ’67 Firebird and painting it Satin Black, doing the chrome trim in Bronze, and finishing it off with Gloss Black flames – I’m sensing a little Firebird family rivalry here. Stay Tuned….