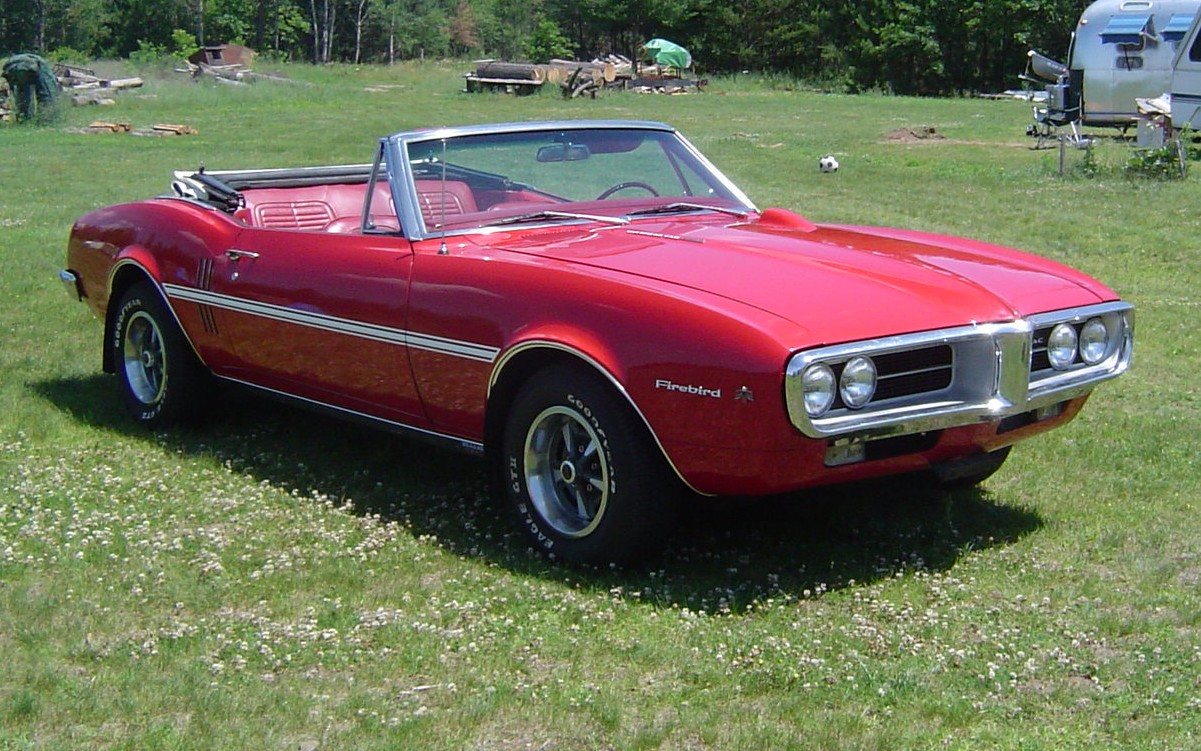 SPRINT 6:  The inline OHC six-cylinder, Sprint engine was unusual. So much so, to give it adequate attention we broke our feature of it into three parts. Click on the link for Part 1 and Part 2.

Some owners have taken the high performance route with the Sprint, like this beautiful Regimental Red 1967 Convertible from California.  This Sprint was originally a California car, but spent about half of its life in Wisconsin where it had been stored in a barn for 22 years until a gentleman found it and restored it.  These pictures are from the day the present owner bought it with less than 49,000 original miles on it.  “In the 10 or so years that I have owned it, I have put less than 100 miles on it. The first thing I did was remove the exhaust system so that a custom built header for the OHC could be installed.   Then the motor came out to be replaced with a unique “stroked” short block and ported head.  The combination on the dyno was about 340 HP without much effort, just some timing and ignition work and a very good carburetor tune.” 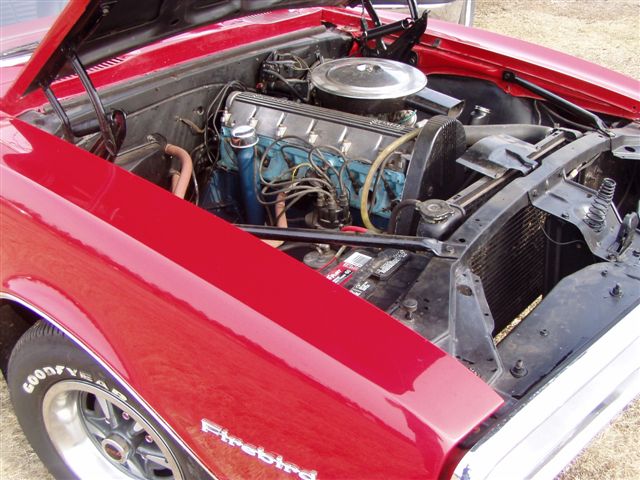 “I would guess there are well less than 1,000 Sprint Firebirds still running. Many more could be brought to life, but the expertise required to work on them has disappeared. Also, there are no companies that make anything other than basic stock replacement parts, and even those are scarce, expensive and of average or lower quality.  I would guess that maybe 5 guys in the country are doing anything that would be considered “high performance” with an OHC engine.  A huge number of OHC engines were removed in favor of V-8s from as far back as the mid-70 and it continues today.  Sadly, those cars will never be reverted back to OHCs.”

“Production wise, my 1967 is one of only 557 Sprint Convertibles with a Standard Interior.  In my opinion, if you love the attention that the OHC gets at car shows, keep it in place.   If you have a V-8 in your car, no one will care about it at a car show, but you’ll get better performance. I love the OHC and I have one of the very few V-8 killers out there – but unless you’re going to find somewhere to push the car to its boundaries (like on a track or at an auto-cross) then for performance, the V-8 is really the best way to go.” 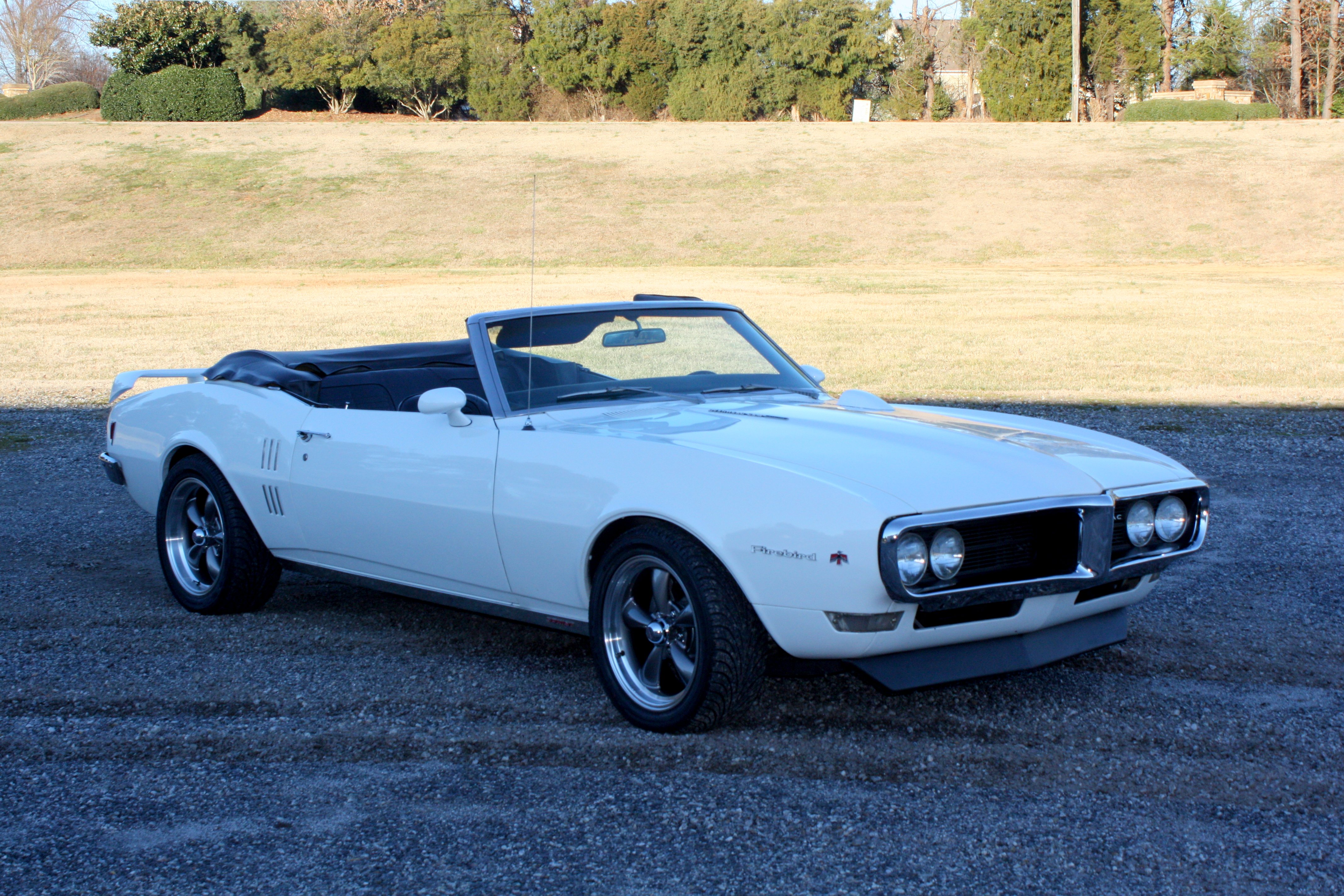 Jeff told us “Over the years, I have owned 6 or 7 versions of the F-Body including a 1969 Camaro RS in high school. Before our kids were born, I had a 1964 Corvette coupe as the “play” car but it wasn’t conducive to kids in child seats so I went searching for something with more than two seats. The first gen cars were always my favorite but it seemed like every car show had every conceivable version on the first gen Camaros, and I wanted something a little bit different, so I starting concentrating on Firebirds. A convertible popped up for sale nearby so I went to check it out. It was a nice looking white convertible with Sprint badges but a 1972 Pontiac 350 engine. I wasn’t 100% sure what a Sprint was at the time but the car was clean and priced right so I took it home. I was curious about the Sprint model and started looking for information. Fortunately, with the Internet, there was a decent amount of information available and even a forum dedicated to the OHC Pontiacs. After some research, I really fell for the marketing hype and wanted to return the correct engine to the ‘Bird. 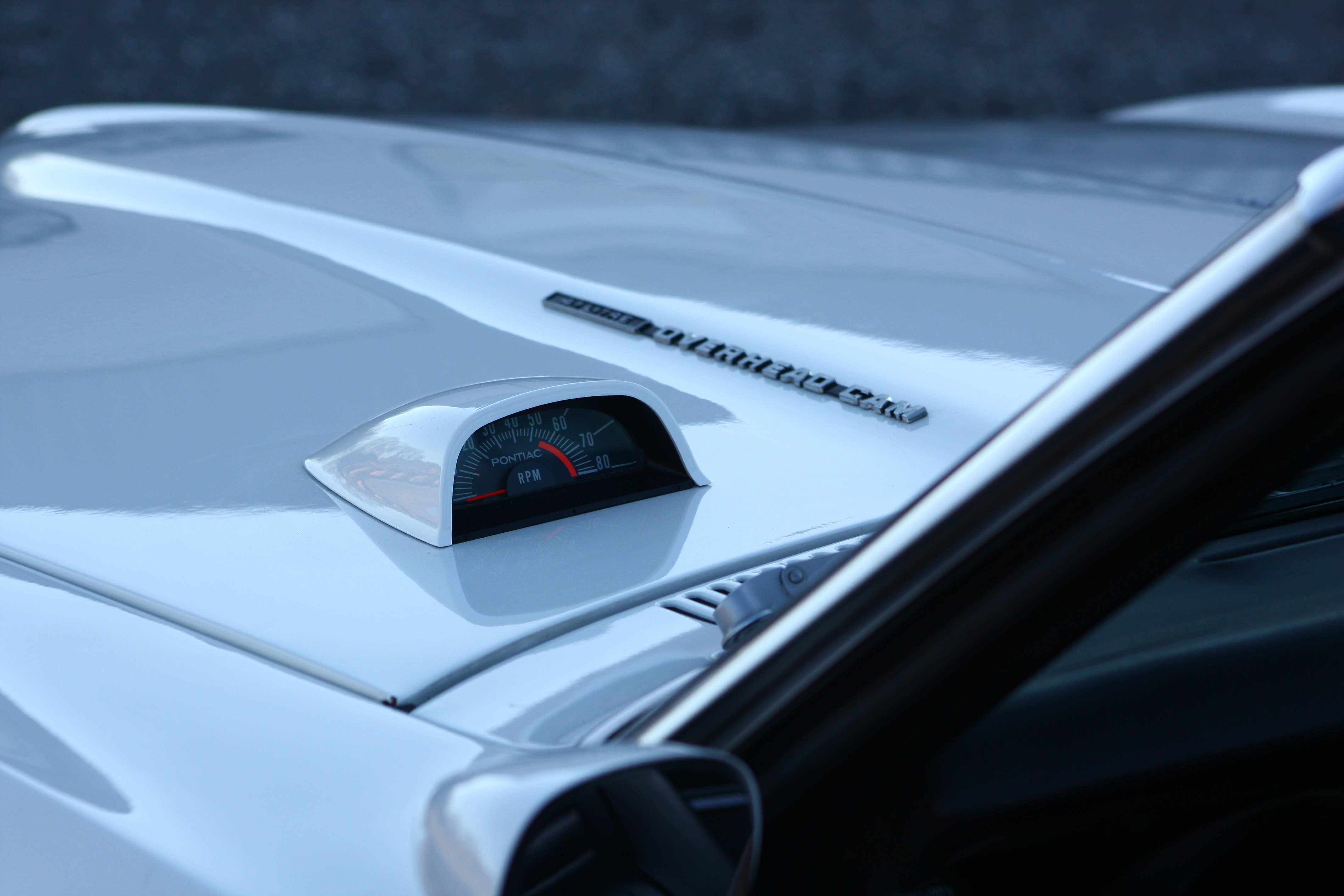 Jeff tells us opening the hood of his ’68 at a car show or cruise night is sure to draw a crowd.

“The unique look and the desire to have something even more unusual drove the search. Since it seems like everyone wants a 400 or 455, a fair number of OHC engines get pulled from cars including some Sprint versions. My first attempt to buy an engine didn’t work out when the “Sprint” engine ended up being a standard OHC (but it did later come in handy when I needed some small parts). I was finally able to find a correct 1968 Sprint engine and purchase it. My father told me I was probably the only person on earth who pulled a V8 out and put a straight 6 in. The engine had been attached to an automatic so it did take some searching to find the parts to adapt it to the original 3 speed manual. When adding power steering, it is a little more difficult sourcing some of the unique parts but they are out there. For cruising around town it has plenty of power and it is fun to throw the top down and listen to the unique exhaust note from the split manifold. When you get to a cruise-in, the car attracts a little bit of attention but when the hood goes up, the questions start. “ 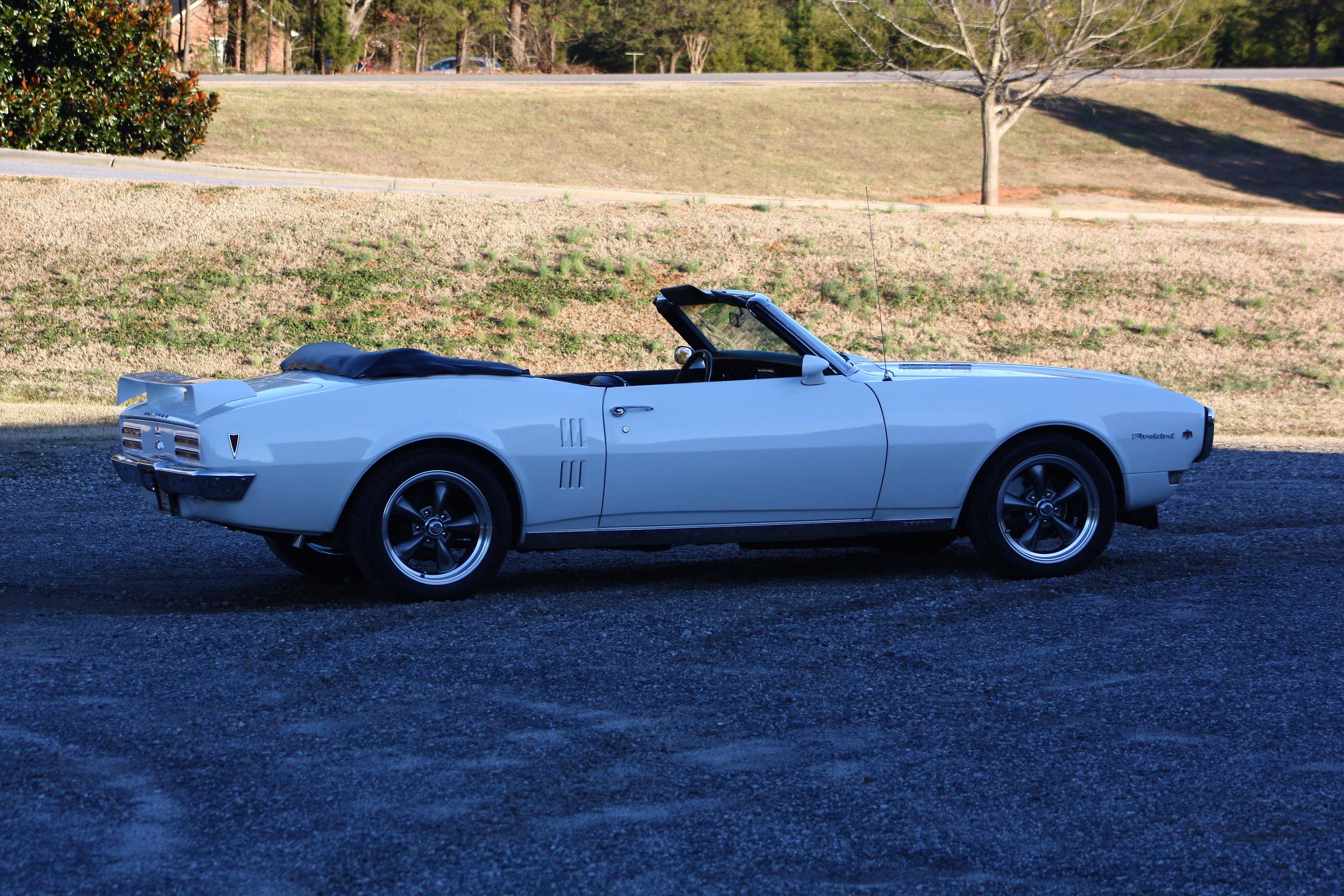 Finally, Chris from Wisconsin, is the proud owner of two 1969 Sprint Firebirds.  He points out the 1969 had the most horsepower of the Sprint Firebirds and the “hot” cam. “The Limelight Green hardtop was my very first car. I bought it 1984 for $1,700.  It was a fun car to drive, with the three speed manual Hurst shifter not the big horsepower of the 400’s that everyone wanted back then. Still it had the look and the Sprint OHC engine provided some off the line performance. I surprised a few Cameras a Nova and a Barracuda just to name a few. I took a lot of heat owning the 6 cylinder but I had a feeling the car was something special.  I think people are now finally giving the sprint engine its due. The car was a blast to drive and got a lot of looks. 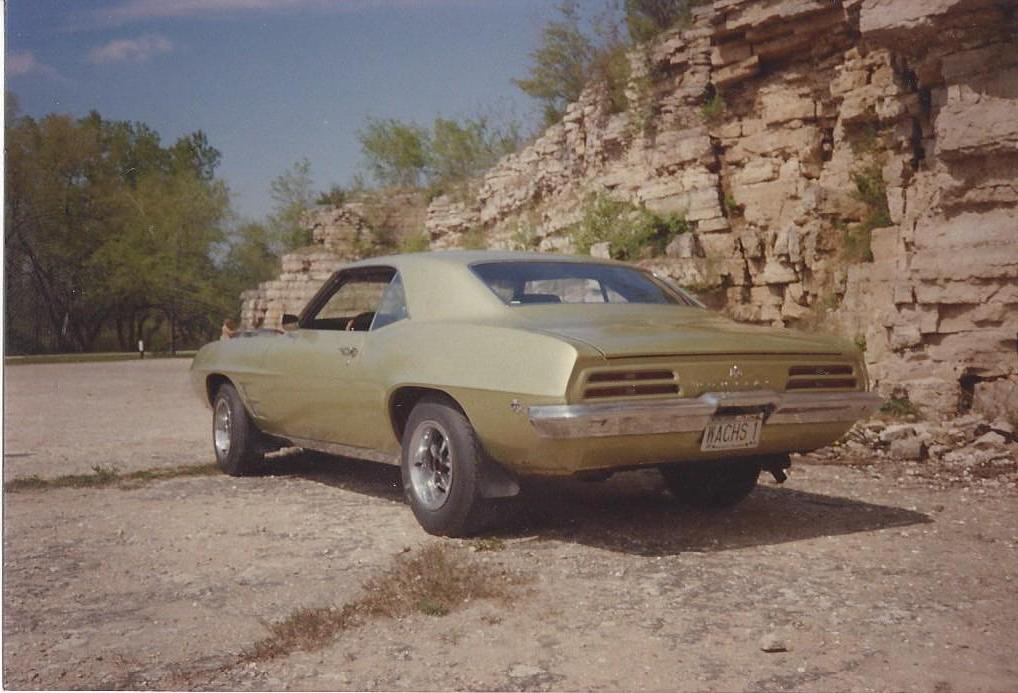 Chris remembers taking heat from his car buddies for opting for the six-cylinder in his Firebird.

“My high school sweet-heart and I had quite a few memorable road trips in the green machine. I ended up marrying her and the ‘bird got put on the back burner after a house and two kids came along. Still I could never see parting with the car. Now close to 30 years after I bought the car the cammer is still mine. It is in need of complete restoration, which I’m in the process of doing.  However, it was really nice in the 80s and was mentioned in High Performance Pontiac Magazine in the fall of 1987.  I have enclosed a couple of pictures of when it looked its best.” 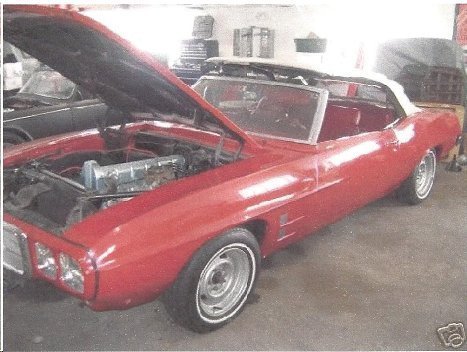 “The other 1969 Sprint is a red/red/white top convertible. I found this car in 2008 while surfing the net looking for parts for my hardtop. Knowing that the sprints were a rare vehicle I decided to put the restoration on hold to buy this convertible. I bought the car from the original family owners. The guy was a GM employee and special ordered the car.  It is a highly-optioned car including power top, power windows, clock and rally II rims. This one also has a TH350 auto transmission which I understand is one of only 54 ever made. 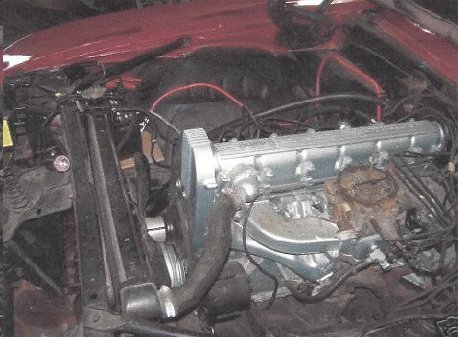 “I’m a diehard Pontiac guy, owning over twenty in my lifetime and presently owning 8.  The sound of the overhead cam six engine is unique to itself.  It may not be the heart pounding thunder of V8, but it is very recognizable. A person needs to realize the purpose of the engine and to appreciate it for what it is. At the time GM had nothing like it. It was designed to compete with European cars of the time. I also feel that it was a foot in the doorway for Delorean and McCellar, engineers at Pontiac at the time, to introduce an OHC V8 engine.  Unfortunately, it never happened, at least in production, but one could only imagine what could have been!”

It’s quite clear that while these special Firebirds never made it to the levels of popularity that their V8 siblings attains, the passion still runs strong and deep.  They may be missing two-cylinders from the rest of the pack but they aren’t short on fun or devoted owners. – Ken Pitcher