As the nation focuses on the NCAA basketball tournament this week, we have a Firebird Final Four for our first gen fans to enjoy.  Admittedly, today it is unusual to own even one first generation Firebird, and we’re all proud of our vintage Pontiacs.  But when we meet someone who owns four first-generation Firebirds and has owned 23 over the past 36 years we find that simply unbelievable! 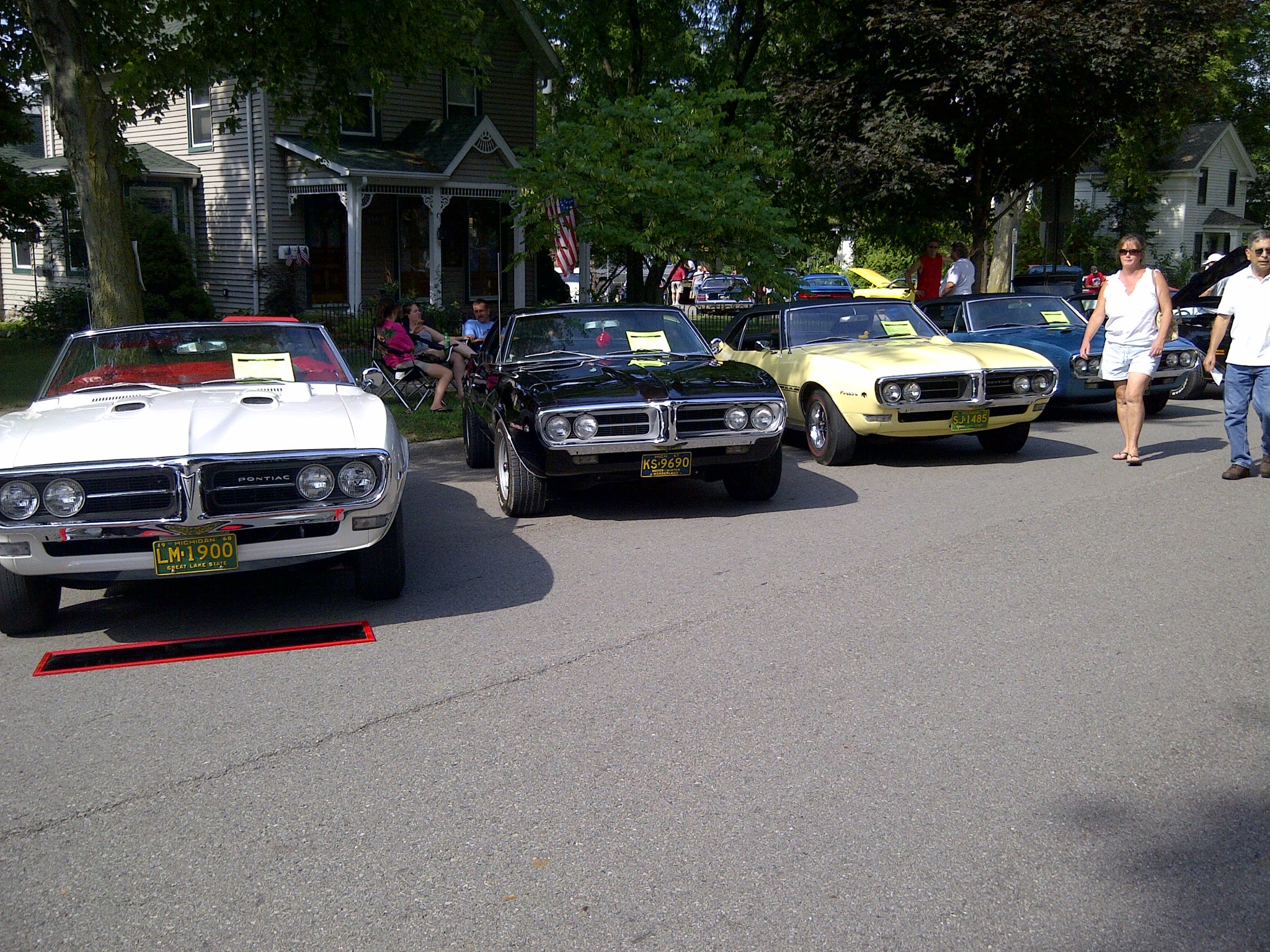 Mark loves to get out and show his cars.

Midwest Firebirds’ member Mark Evans, near Ann Arbor, Michigan is a committed first generation enthusiast.  He currently owns two ‘67 and two ‘68 Birds, some of which are extremely rare.  Here’s a quick run-down, of the all-pro line up in his garage.  A Cameo White, all original, 1968 400 4-speed convertible, a 1968 ultra-rare 350 HO Royal Bobcat Firebird, A 1967 Tyrol Blue 400 HO hardtop and finally a 1967 326 coupe with a custom black metal-flake paint, Mark resurrected from a heap of rusted out pieces.  All of his cars were lovingly & painstakingly restored by Mark himself. 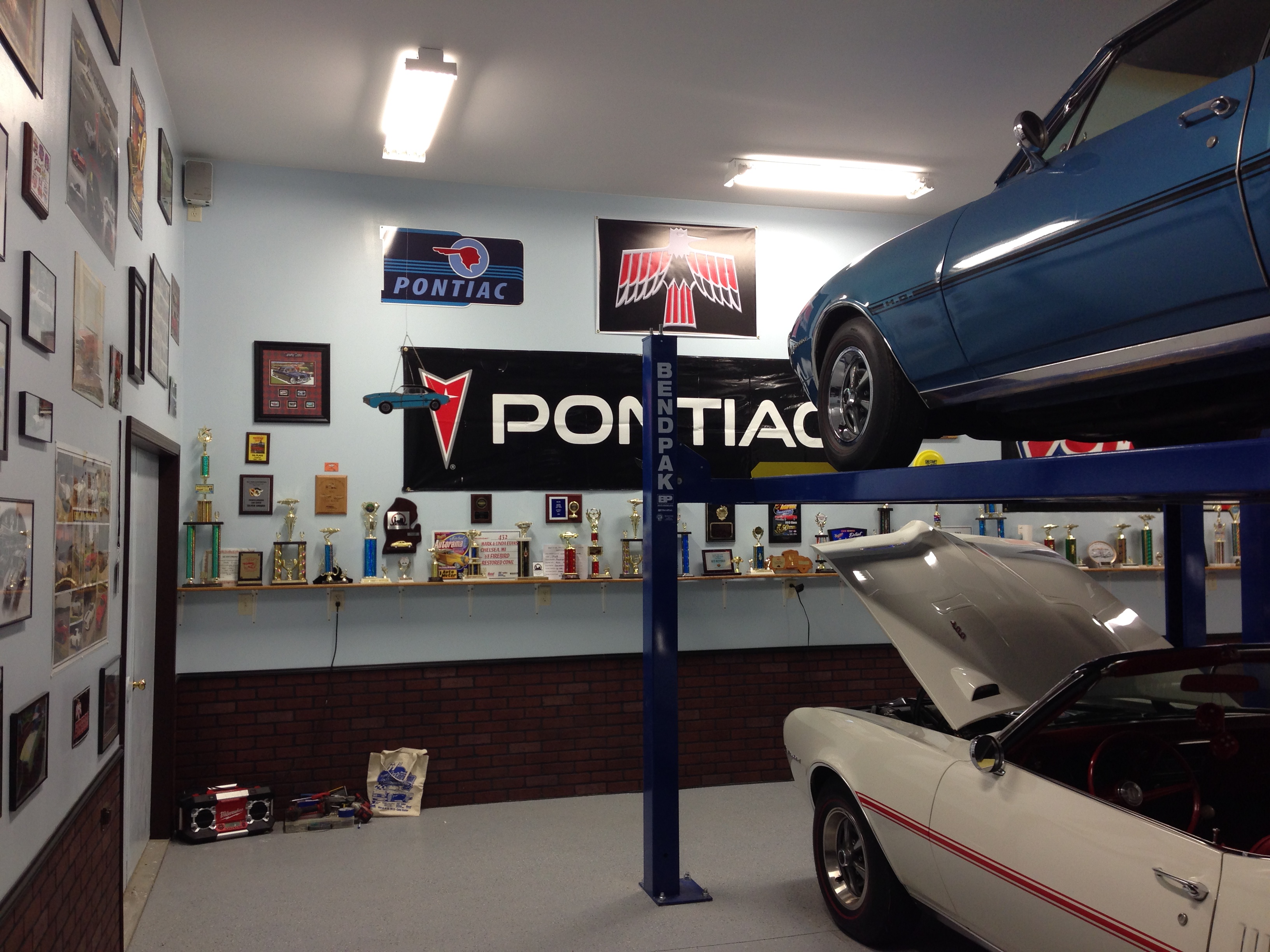 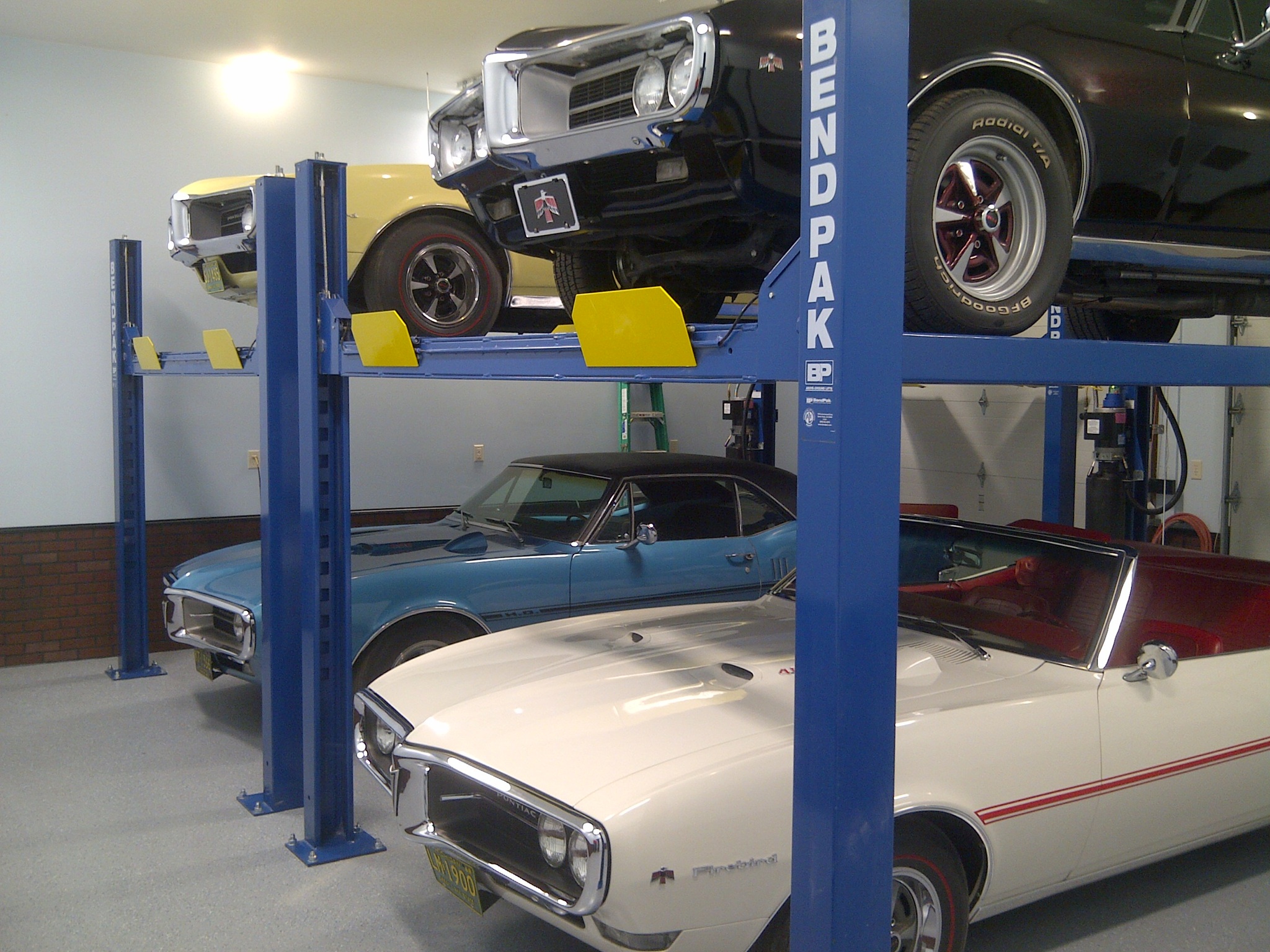 In this garage – it’s all about first gen Firebirds! 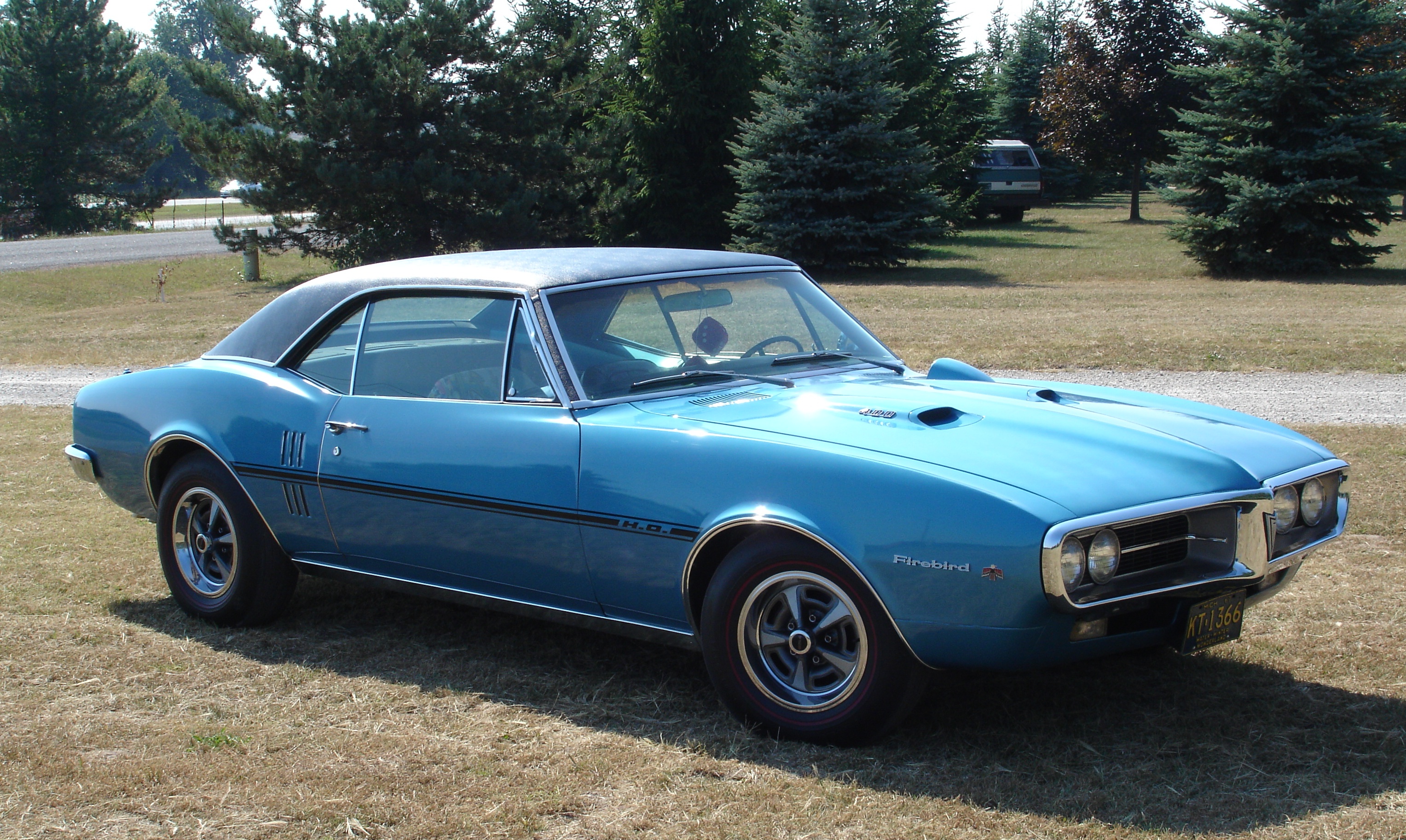 Let’s start with the beautiful 1967 Tyrol Blue 400 H.O. coupe, with long branch manifolds & 670 heads.  Mark told us it was originally owned by a General Motors executive, which must be why it has so many prized factory options.  This 67,000 mile beauty has factory air, the full gauge package, vinyl top, a fold down rear seat, tilt wheel, power front disc brakes, power windows, power rear antenna, power trunk release and rear window defogger. 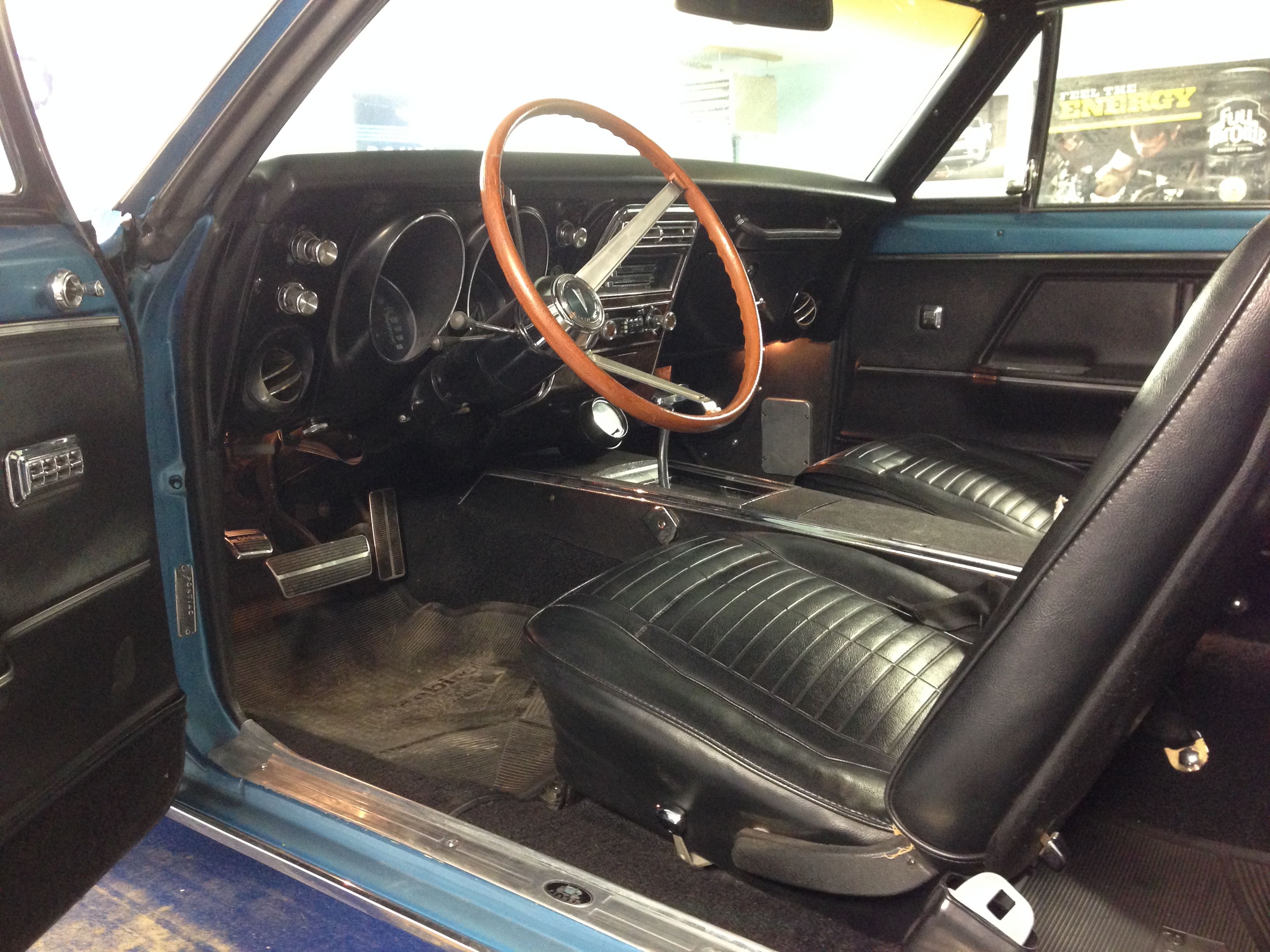 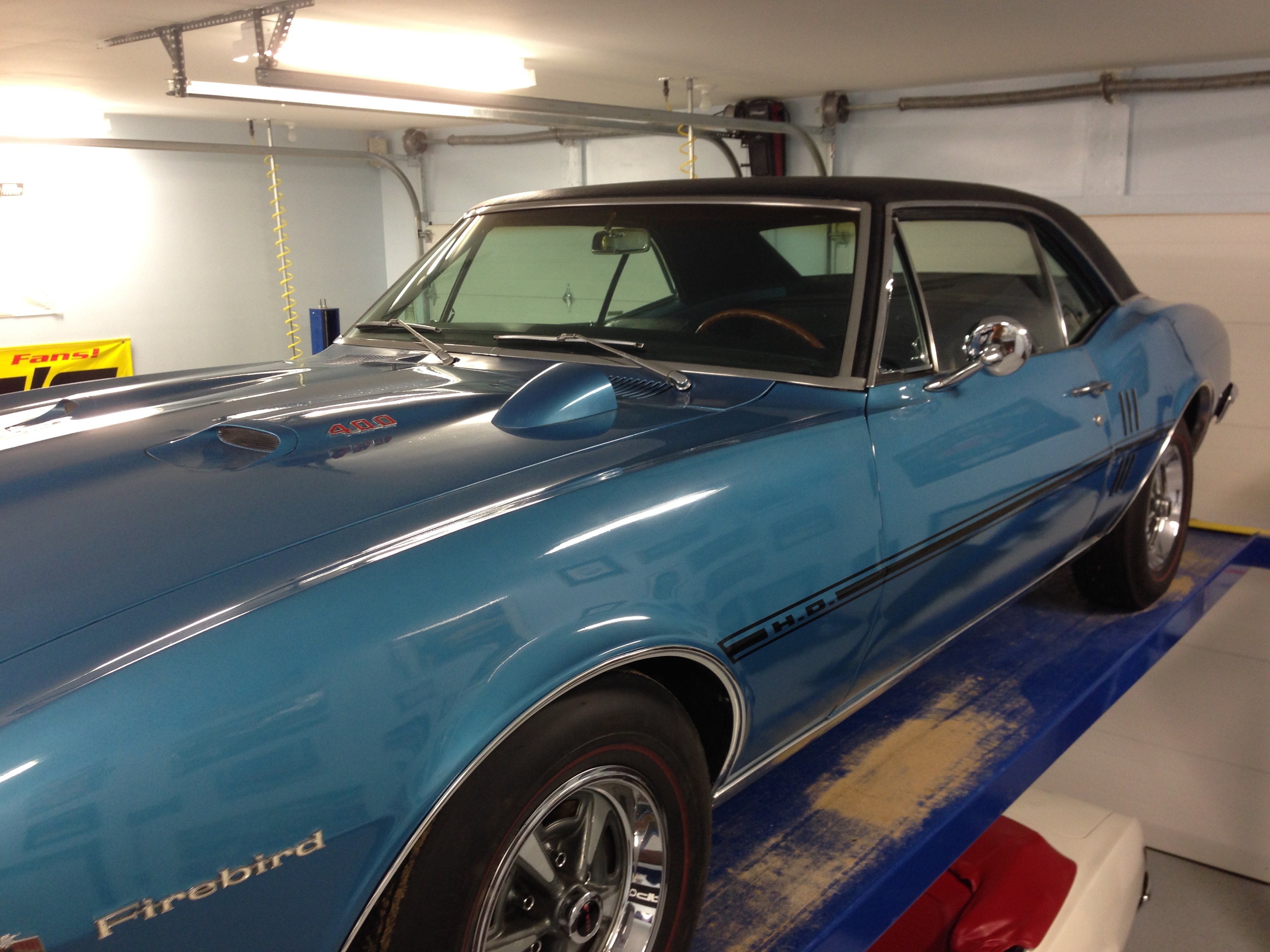 Mark has owned this bird since 1985, and has rebuilt the engine with some high performance goodies on the inside to keep the stock look on the outside, but boost the power to over 450 horses.  It’s his fastest Firebird by far, and took first place at the GM Nationals in Carlisle Pennsylvania in 2002. 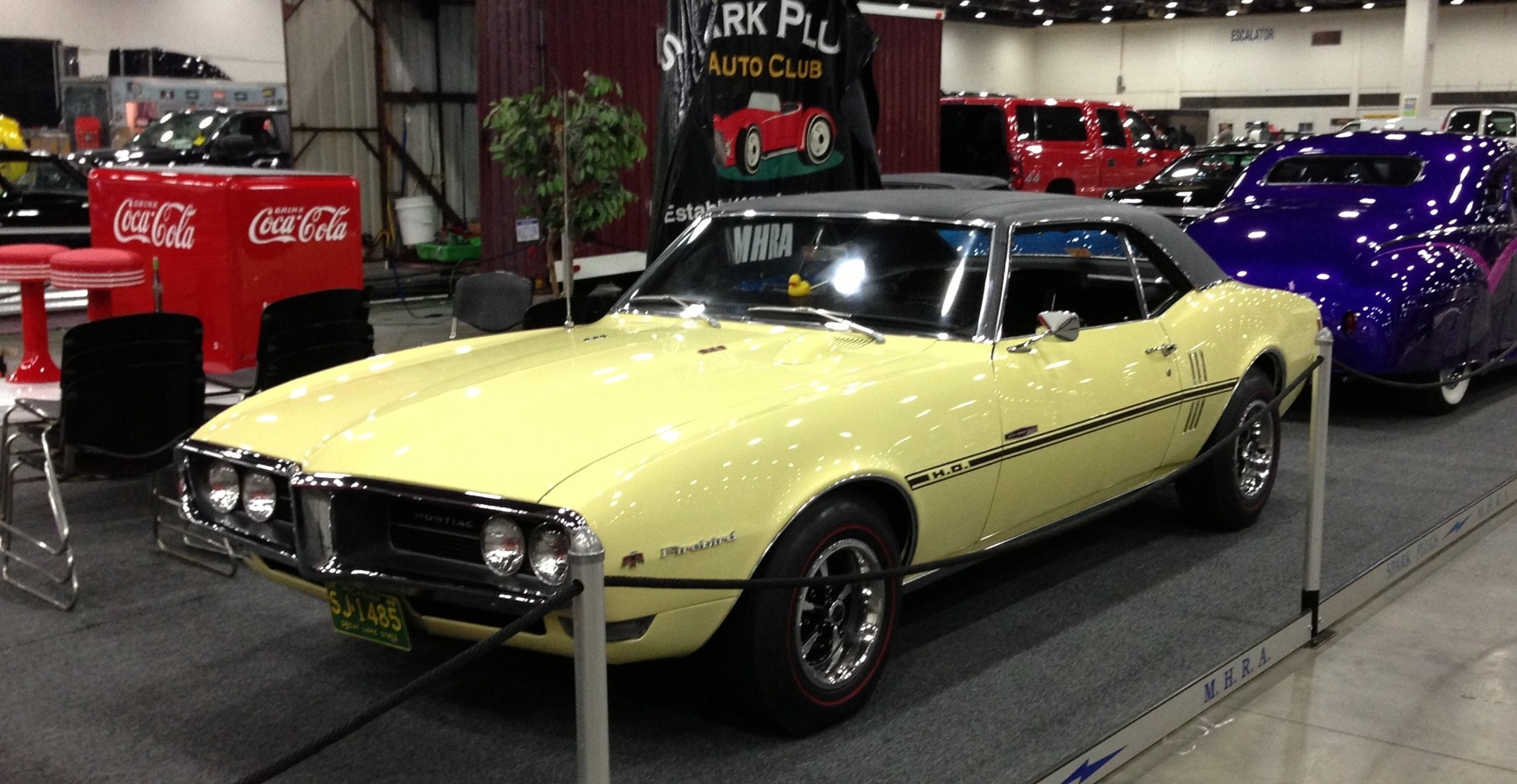 Next out the gate is a very rare Firebird.  “This Mayfair Maize 1968, 350 HO is a Royal Bobcat.  I have in writing from the dealership my parents purchased it from.” 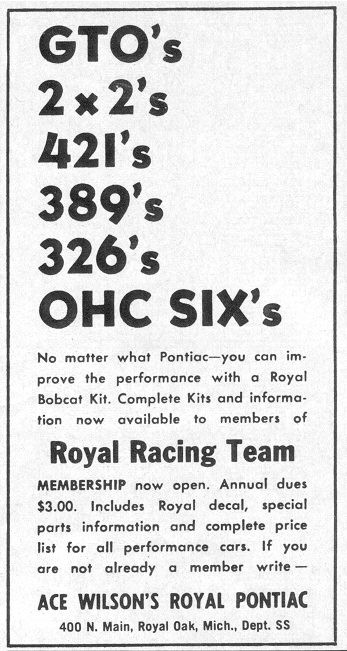 Mark continues, “When my father passed, I inherited this car from him.  The common misconception about a Royal Bobcat car is that it has to be a 400.  Not too many people are aware that Royal Pontiac in Royal Oaks Michigan, where the car was purchased from originally, created a Royal Bobcat kit for other engines as well.”

We contacted our good friend, and Pontiac historian, Tim Dye the curator of the Pontiac Historical Museum, in Pontiac Illinois.  He helped us research the Royal Bobcat conversion, and documented in a road test article from the February 1968 issue of Sports Car Graphic Magazine (See our archives pages for this document)  SCGM states:  “(Royal Bobcat) Kits are supplied for other Pontiac engines as well, and a full Bobcat conversion is available even for the overhead-cam six.” 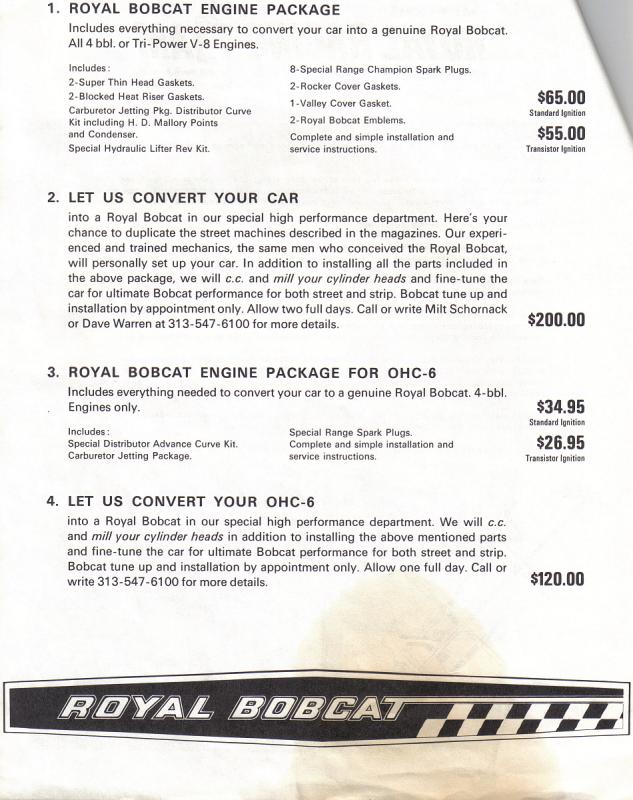 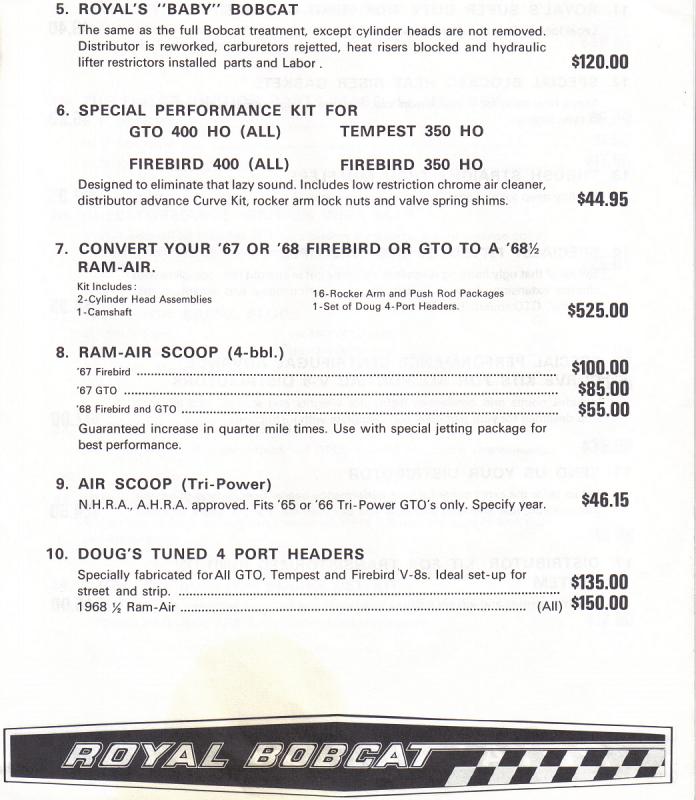 More to come in a future post about the Royal Bobcat conversion, but it is similar to what the Yenko dealership did for a Camaro.  It was a very rare, high performance upgrade to the engine that promised more horsepower, and about a half second off a quarter mile time.  Today, a Royal Bobcat Firebird or GTO fetches extremely high dollars in the collector market. 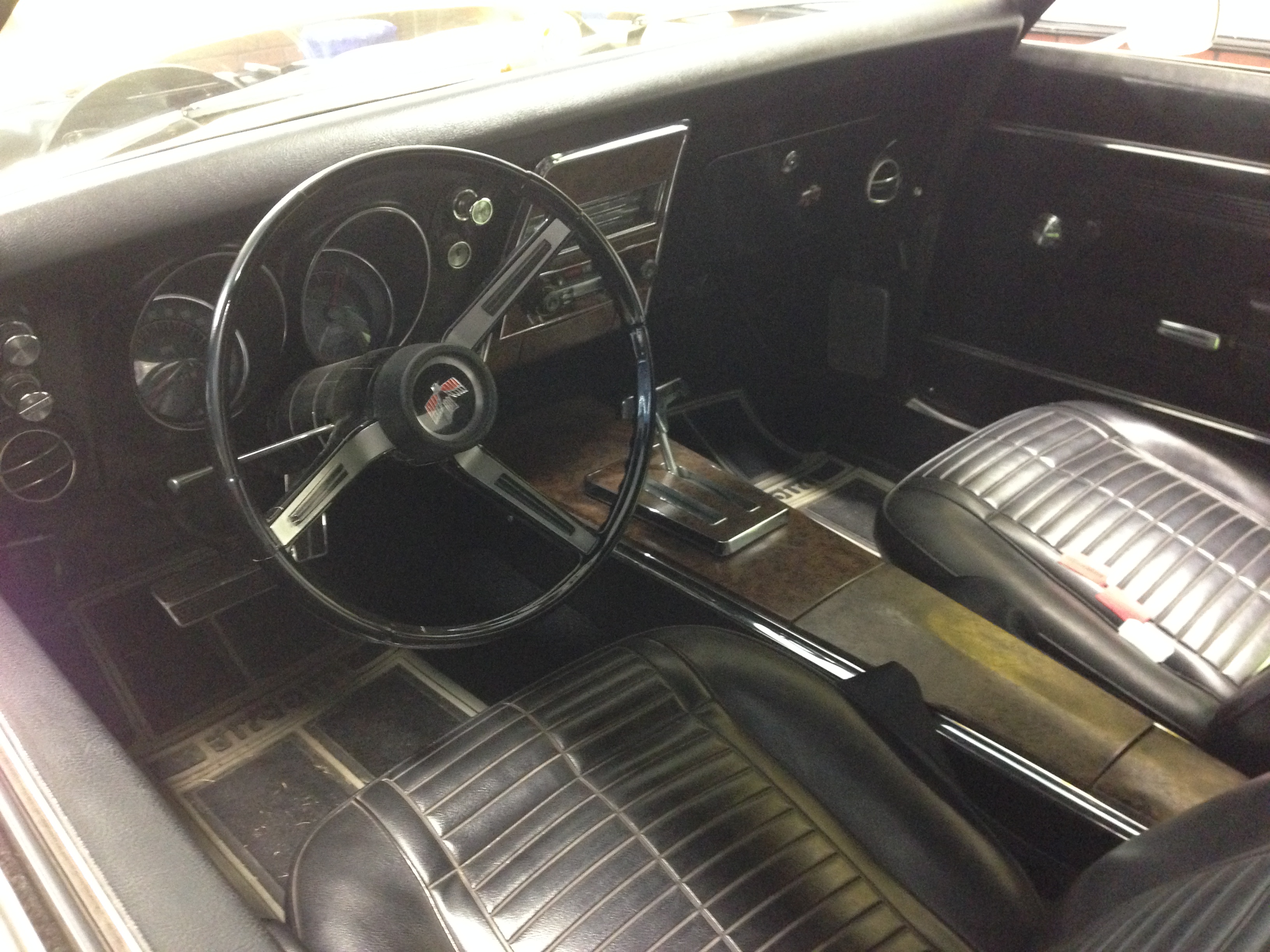 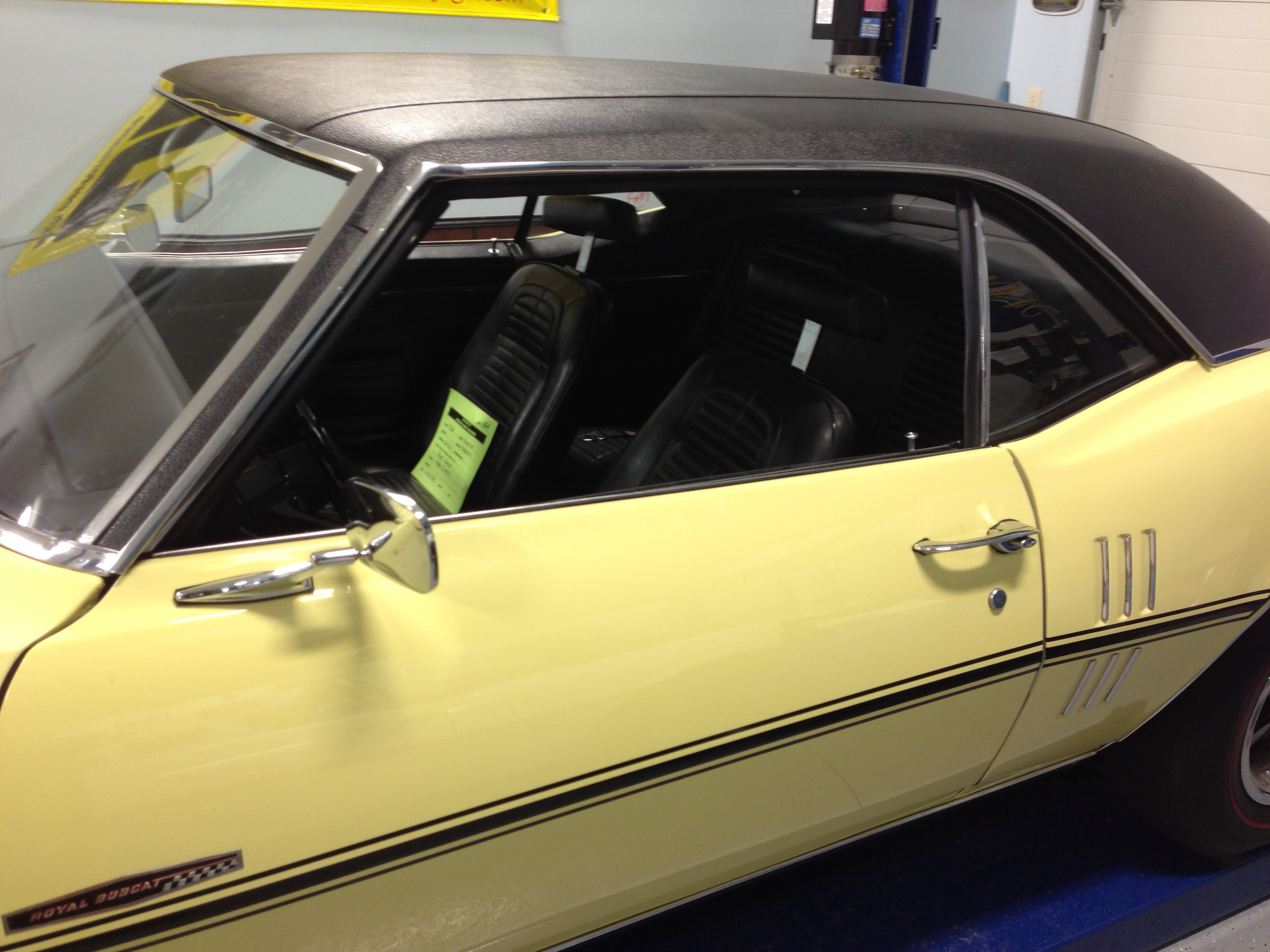 Look closely just above the HO stripe and you’ll see the Royal Bobcat emblem, letting everyone know this is a high horsepower machine.

This is a great start to the Firebird Final Four.  Stay tuned for part two, where we take a look at Mark’s two award-winning first Generation Firebirds.