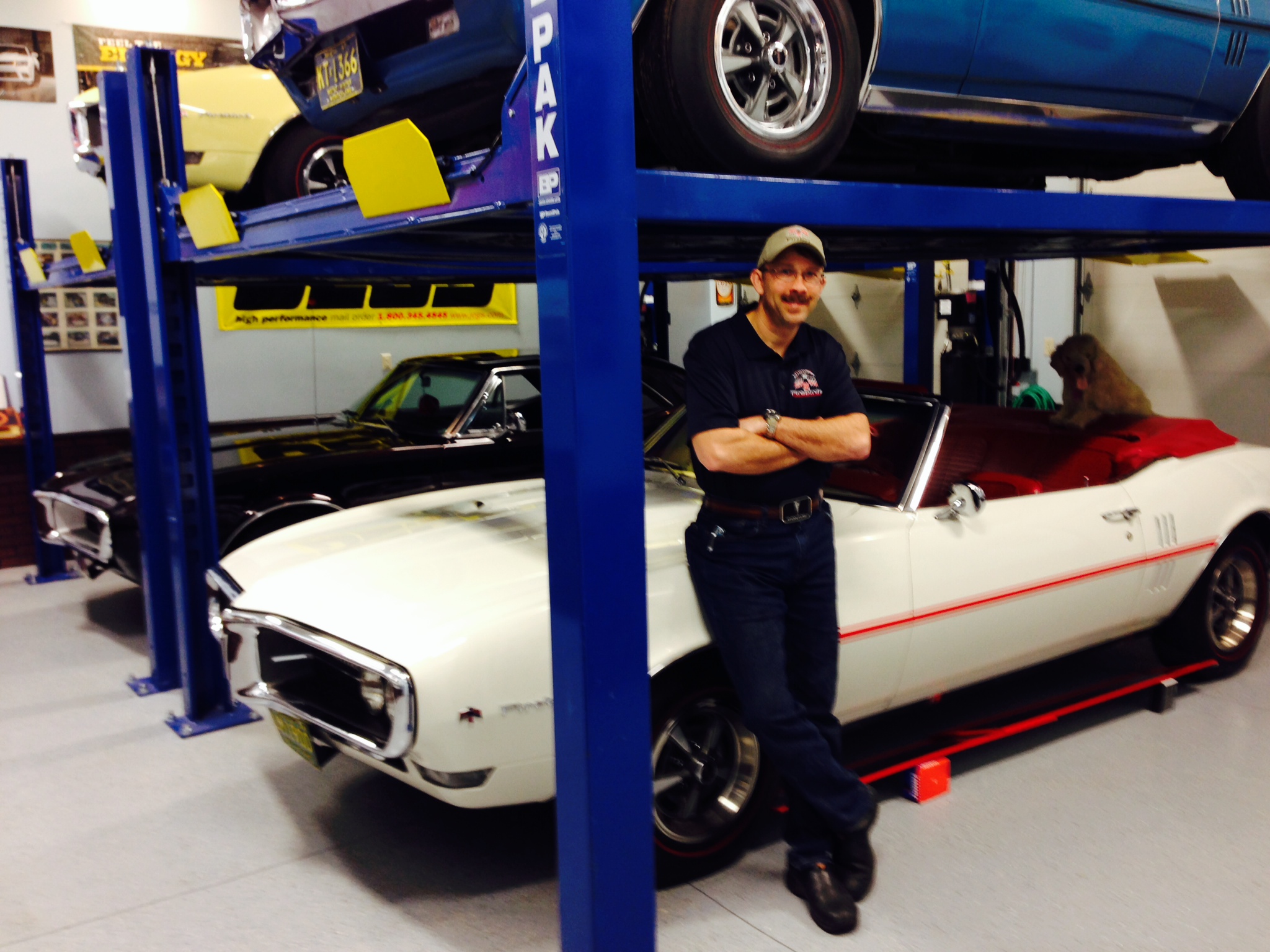 Last week we highlighted the first two of Mark’s four first-generation Firebirds.  In this second part of this feature we are going to take a closer look at Mark’s two award-winning Firebirds; the Cameo White 1968 400 convertible and the 1967 Metal-Flake Black 326 coupe. 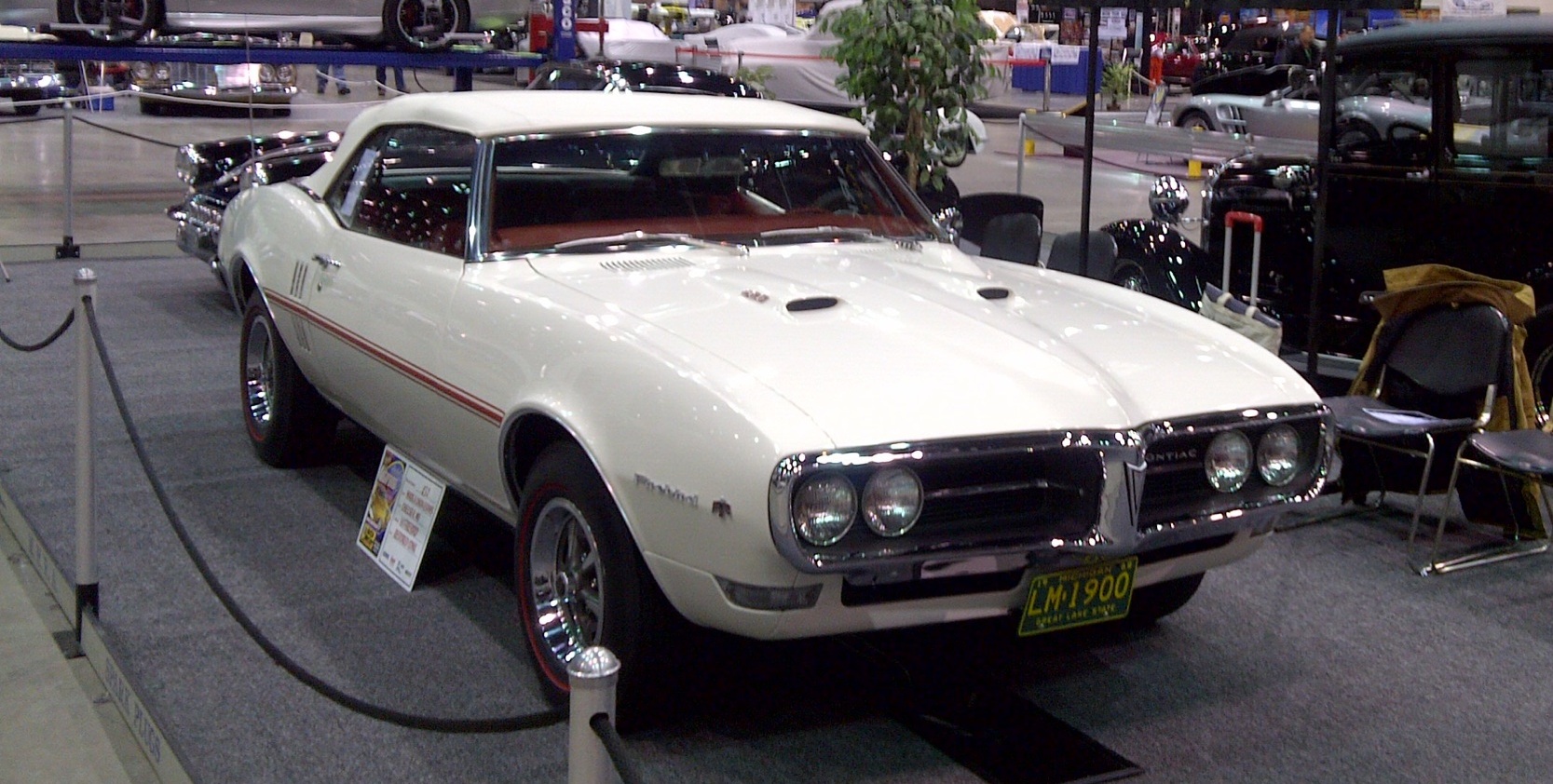 Let’s start with what might be the cleanest, most meticulously-restored to original factory condition Firebird in Mark’s stable – which actually is his wife Linda’s car!  This Cameo White, with red interior 1968 Convertible is a fully-correct, 400 4-speed, PHS documented Firebird with a concourse level restoration right down to original lacquer paint. 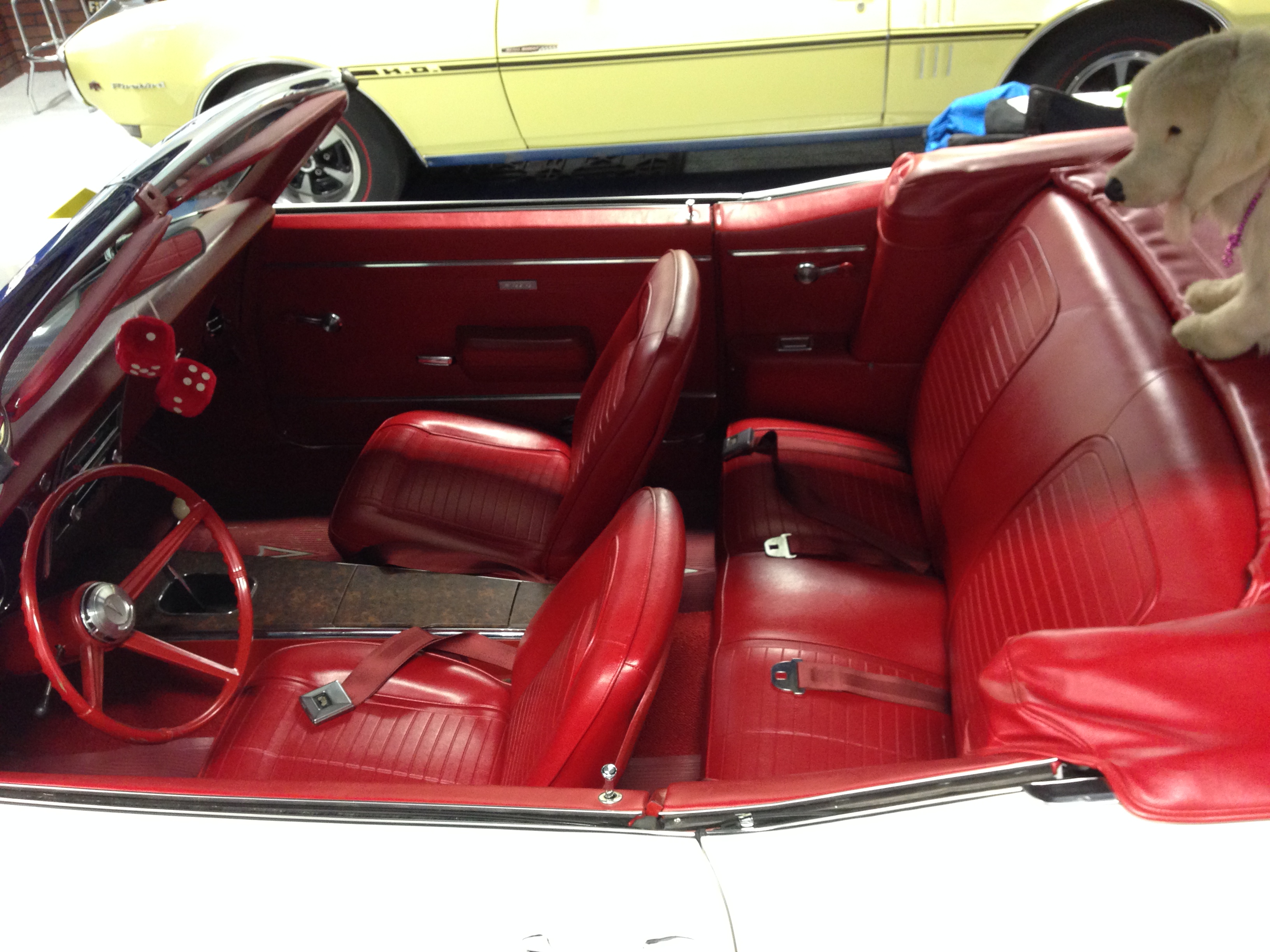 The red interior is flawless! 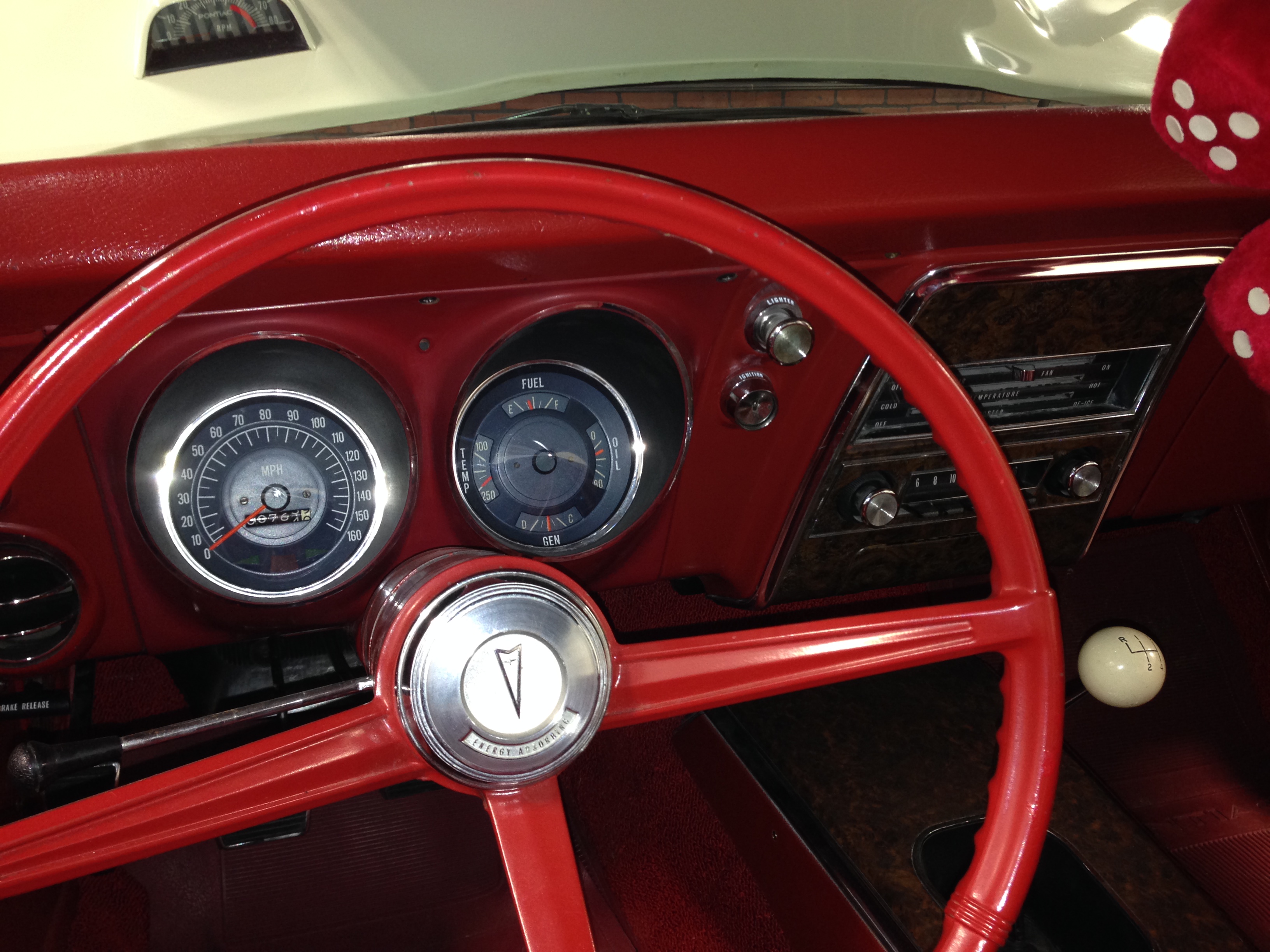 You may remember in 2008 Hallmark created a Christmas ornament of a 1968 white convertible Firebird, with a red interior, which looks just like this car.  So quite frequently, when they show this car, they put a small blue Christmas present in the back seat, just like the ornament. 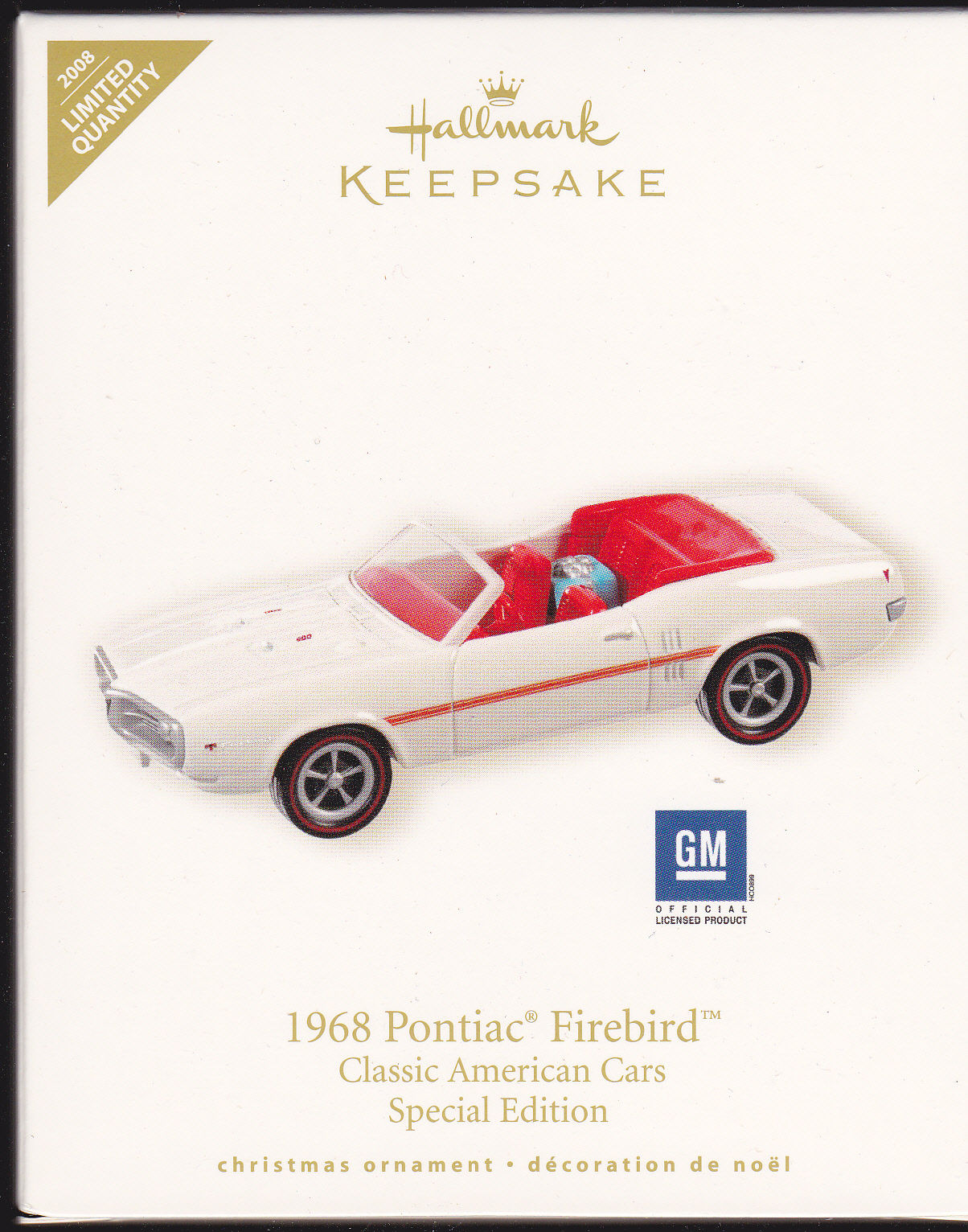 The Hallmark Firebird Christmas Ornament from 2008.

Well, at one of the shows they got to meet the designer of that Hallmark ornament, and he signed their glove box! 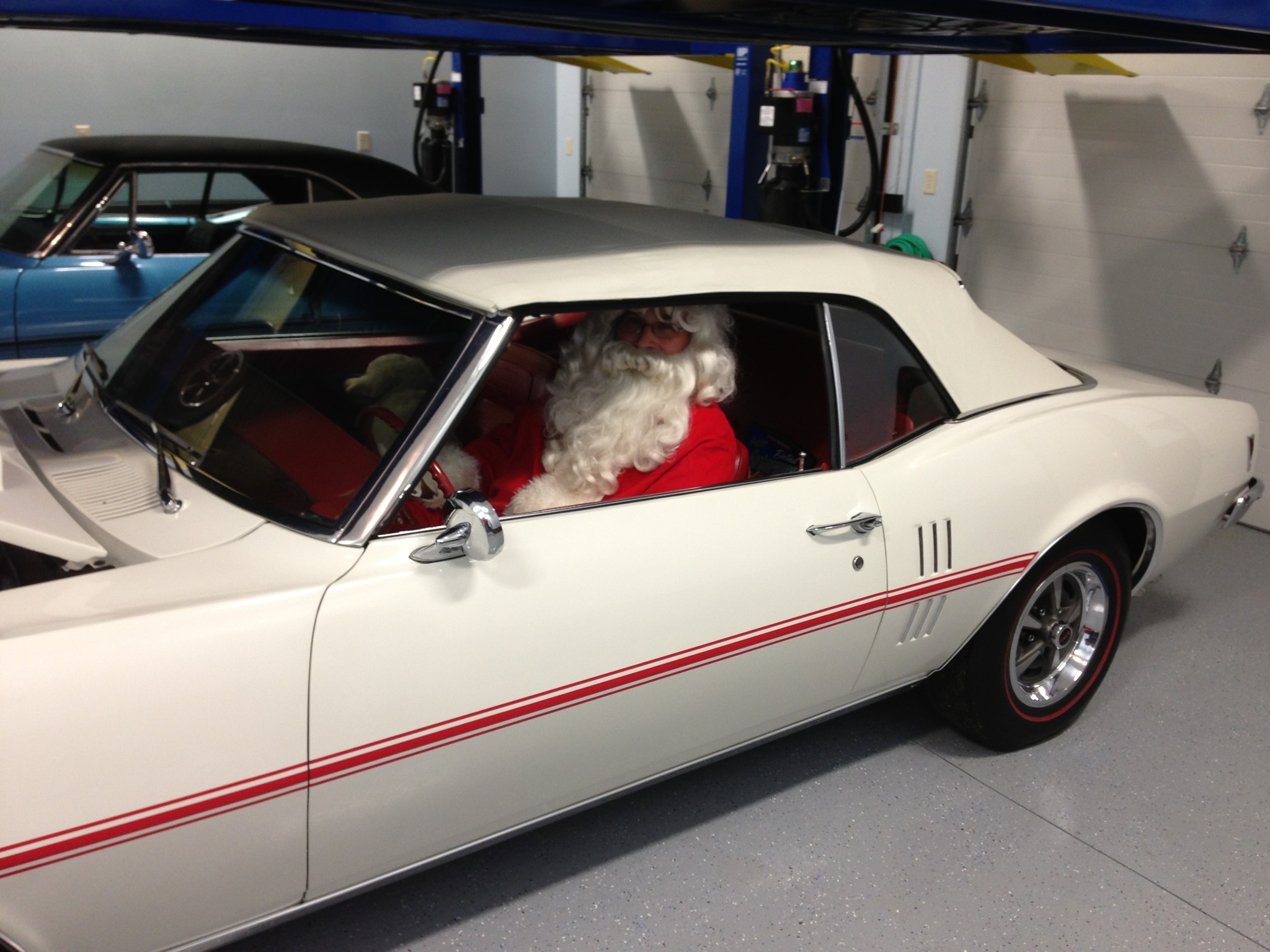 Keeping with the Christmas theme, Santa and Firebird – Sleigh – Mobile!

At the Autorama show in Detroit in 2011, Mark had a special visitor come to check out his car.  It was one of the engineers that worked with John Delorian helping to design the Firebird.  He said this is the most correct restoration of a 1968 Firebird he had ever seen, since they rolled out of the factory almost 50 years ago! 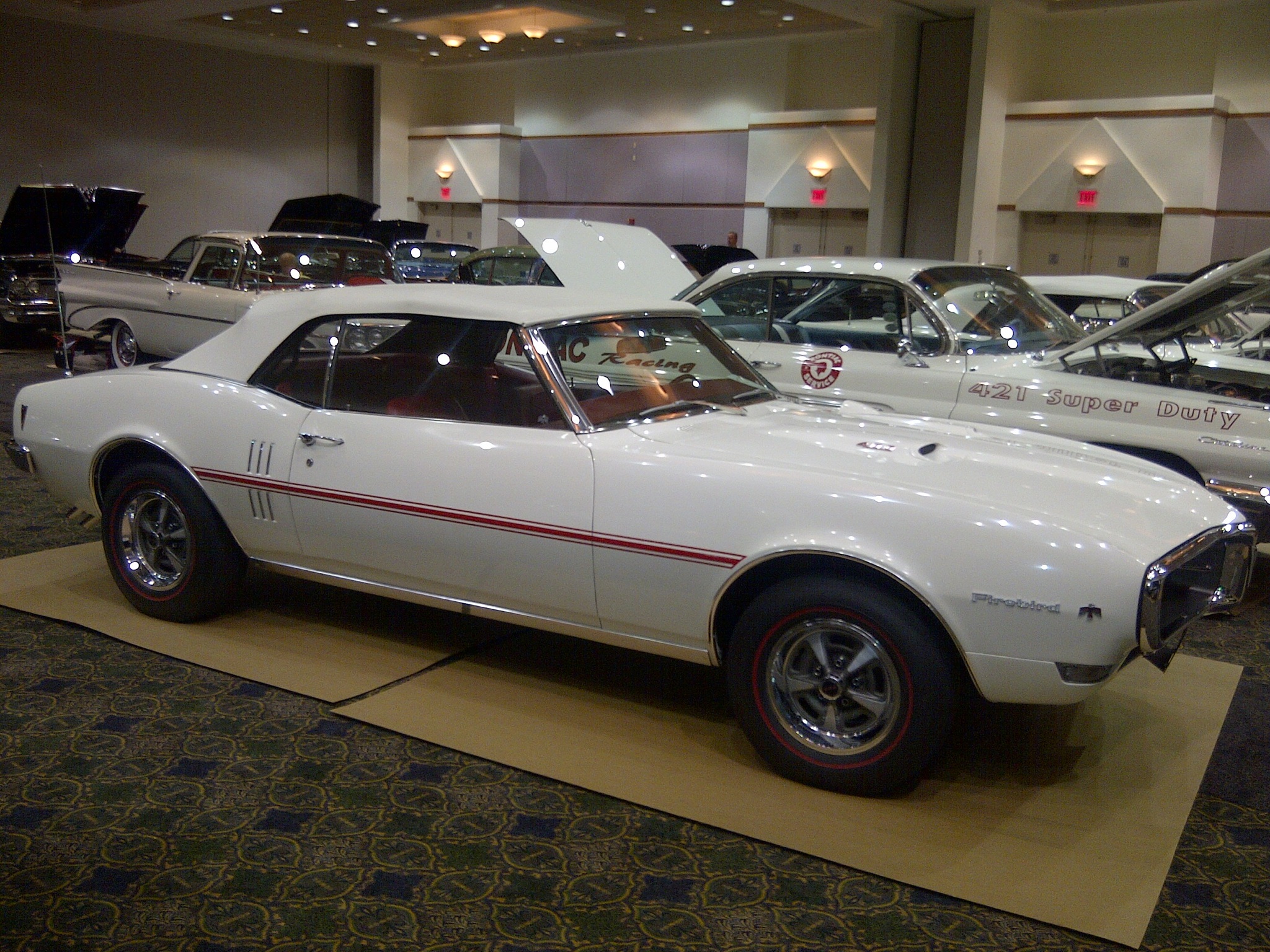 Mark plans on bringing this Firebird out to the Indian Uprising All Pontiac Show in St. Charles, Illinois this August.  We can’t wait to see it! 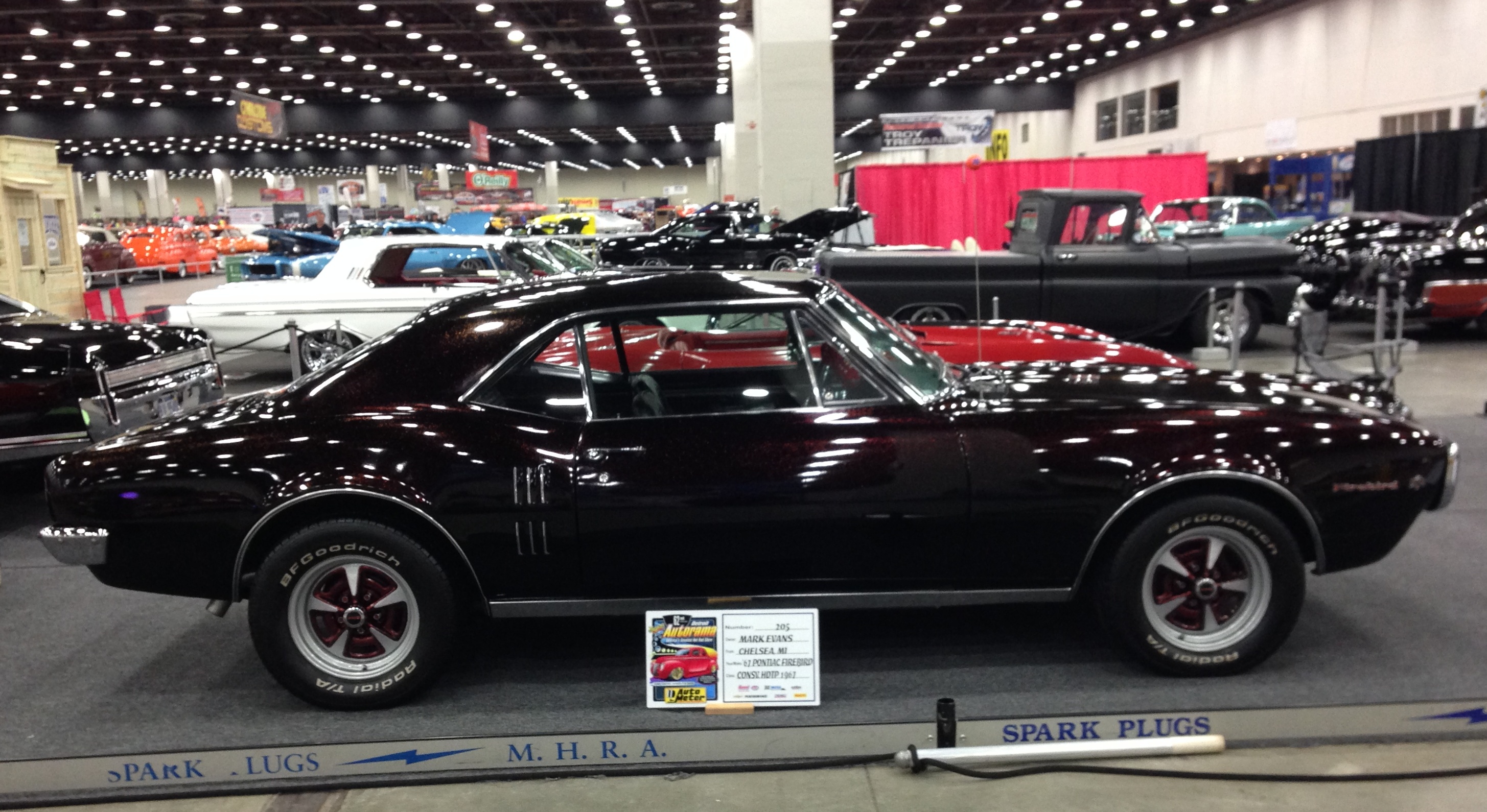 Now let’s look at this Black Beauty with a checkered past.

Finally, Mark states, “the black bird is just a toy referred to as the piece of junk I brought home in pieces. According to my wife and everyone else who had seen it prior to restoring.” After hearing the story of how far gone this car was, it’s a classic tale of one man’s hard work to breathe new life into something, and saving another classic car from the scrap heap.  Unfortunately, Mark has no “before” pictures of the car, but here’s how the story goes. 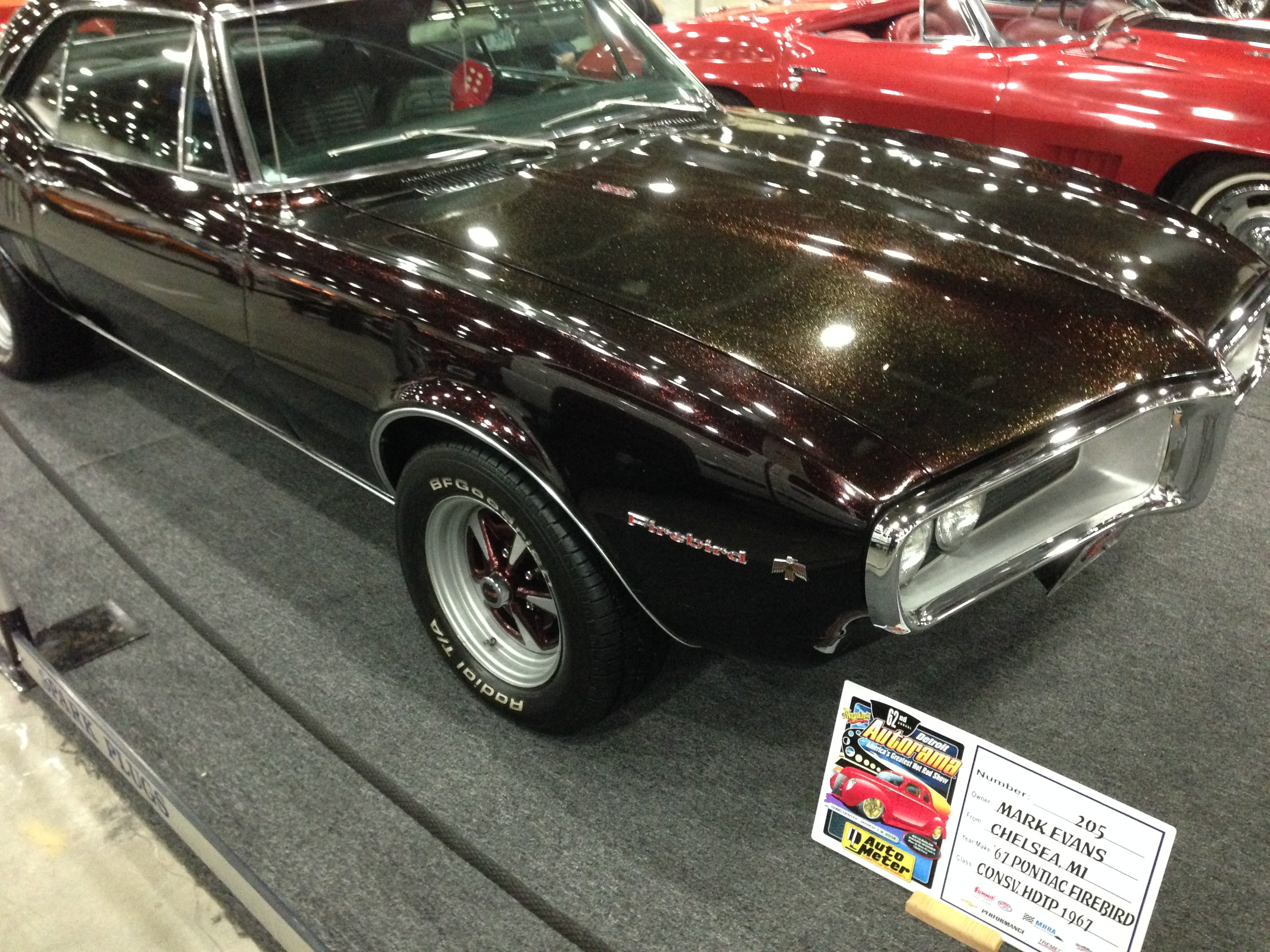 The unusual true metal-flake paint will absolutely stop you in your tracks!

Someone approached him at a show and asked him if he would like to purchase a Firebird parts car.  Mark said sure, and went to see the car in this man’s back yard.  Mark looked around but didn’t see the car anywhere.  The man said look up.  When Mark did he was shocked to see the striped down shell of a Firebird hanging 10 feet off the ground by a chain from a large Oak tree! 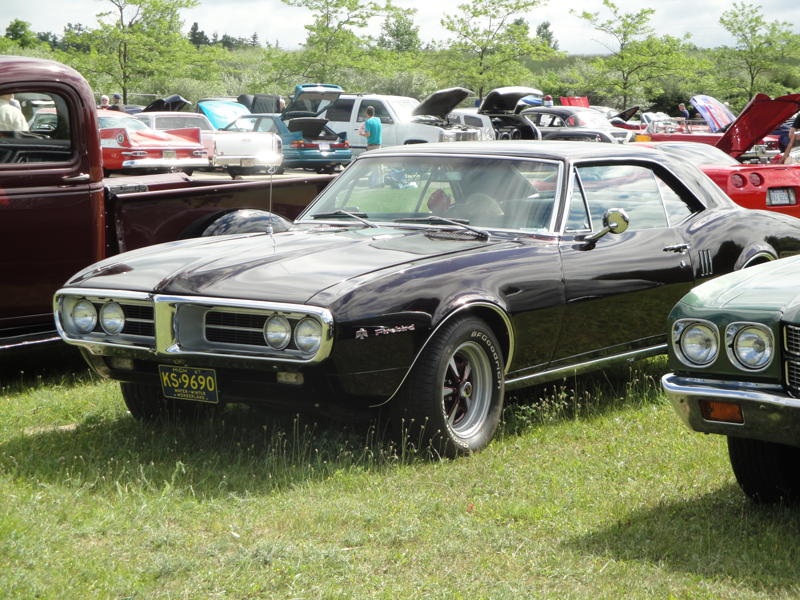 It’s hard to believe, but this Firebird was really “up a tree” before Mark got it!

You see, the car was so badly rotted out, that a collision with a pothole tore off the rear axle.  The man then gutted the car, taking off the front clip, subframe, engine, transmission, interior and glass and decided to wrap a heavy chain around the rear quarter panels and hoist it up the big Oak.  I’m not sure why anyone would hang a car up in a tree; “It seemed to get it out of the way” was the only explanation offered. 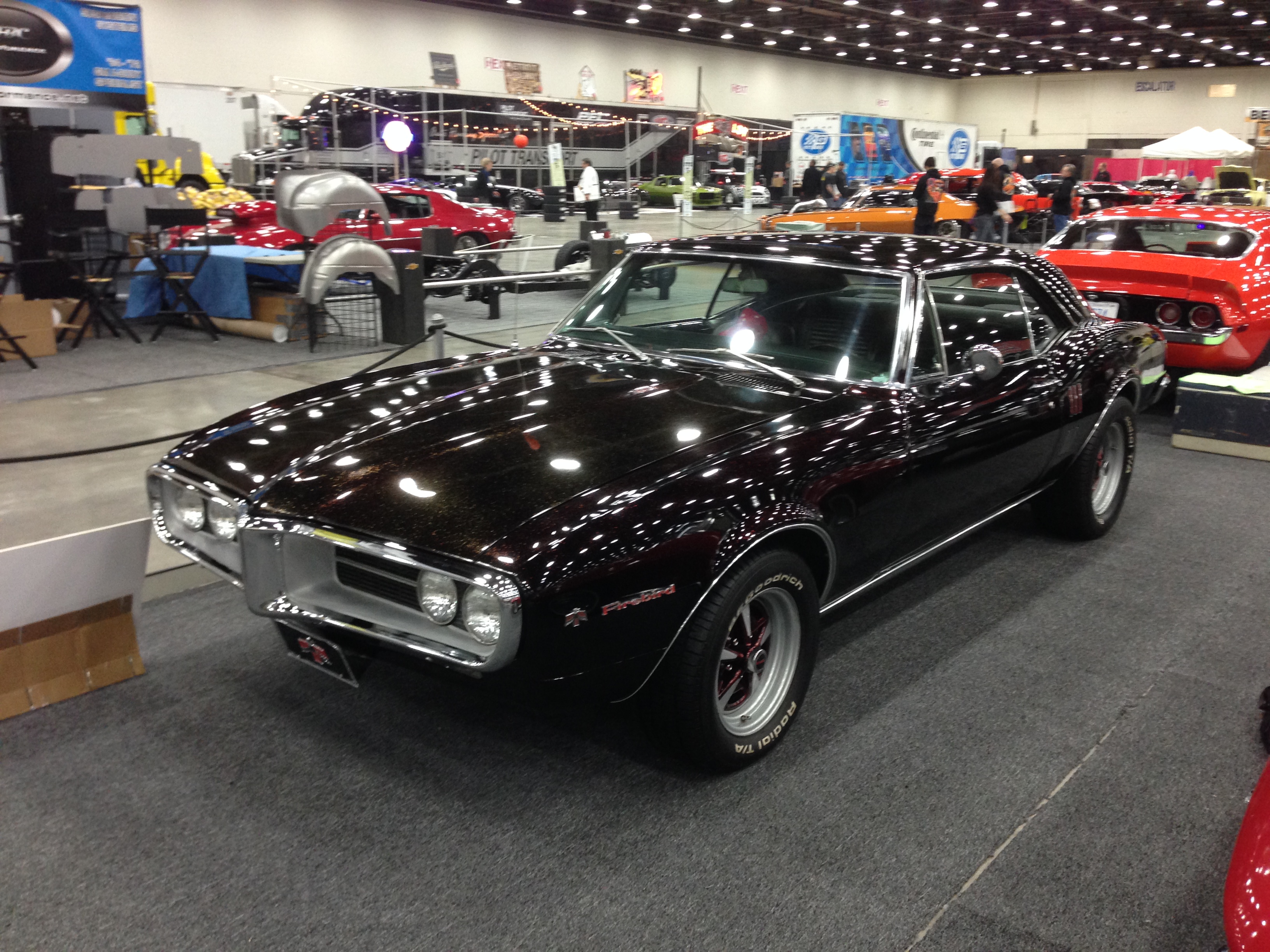 People can’t believe how this car was transformed from parts car to Show Bird!

However, even the shell was badly rusted out, and the chain only made matters worse.  Mark told us “The pressure of the chains around the car pushed both rear quarter panels in about five inches on each side”.   Also, the floor and cowl were rotted out pretty badly and the roof panel had holes in it by the windows.  At this point I’m wondering what Mark even saw in this project, but he must love a challenge, because two and a half years later, he has resurrected this Firebird from the ashes of a rusting and rotting heap into a show-winning street machine.  This is truly the story of the Phoenix. 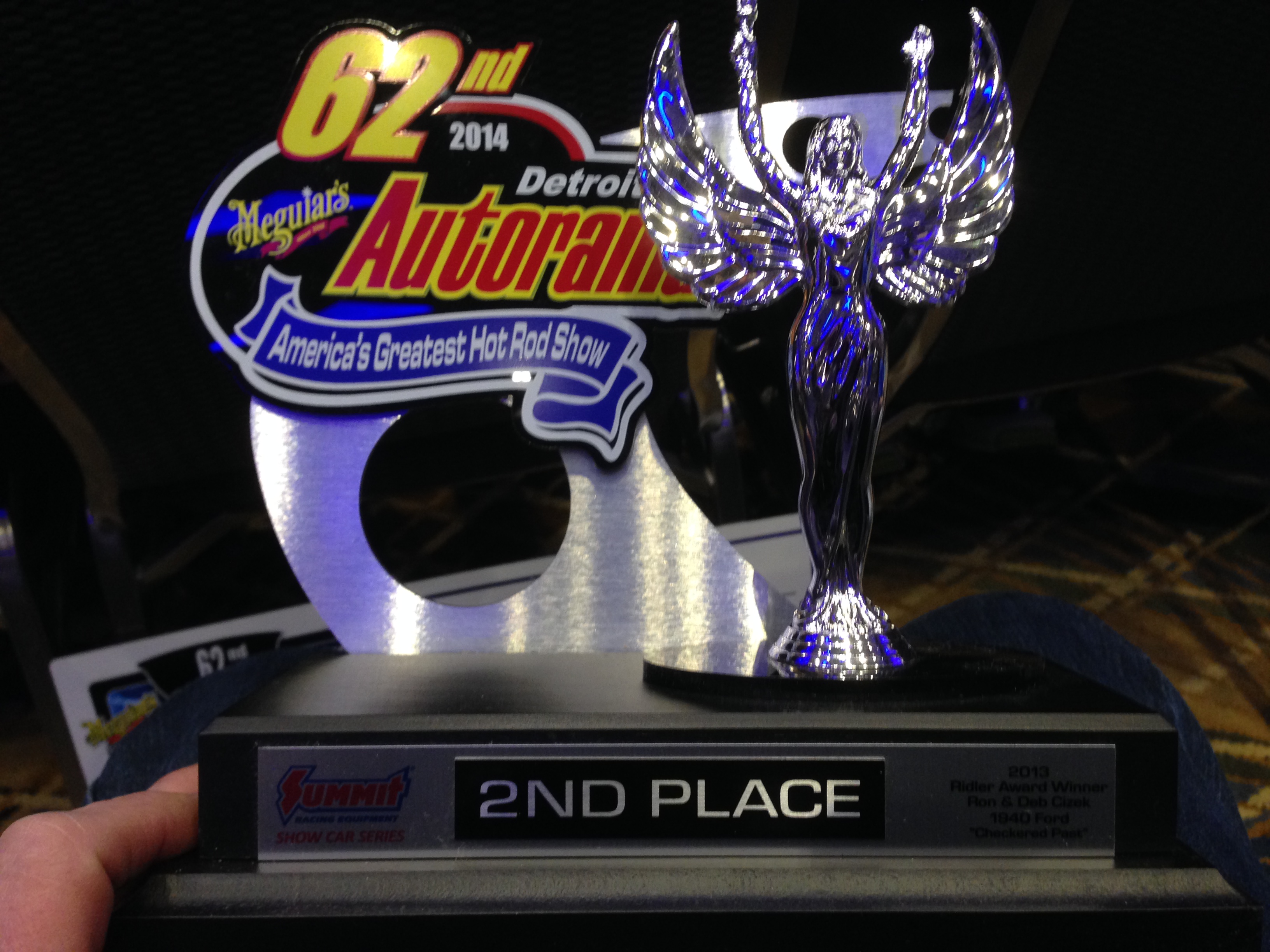 A nice showing at the Detroit Autorama just last month.

Mark’s stable of four beautiful Firebirds, each one unique in it’s own way.

In summary, Mark’s passion for first gen Firebirds is genuine.  He also loves showing his cars, and sharing them with the public and other enthusiasts.  Like many of the friends we have gotten to know, Mark is an incredible resource and asset to our club.  He is knowledgeable and willing to take the time to talk about the subtle details involved in restoring our beloved first generation Firebird- which is exactly what this club is about!