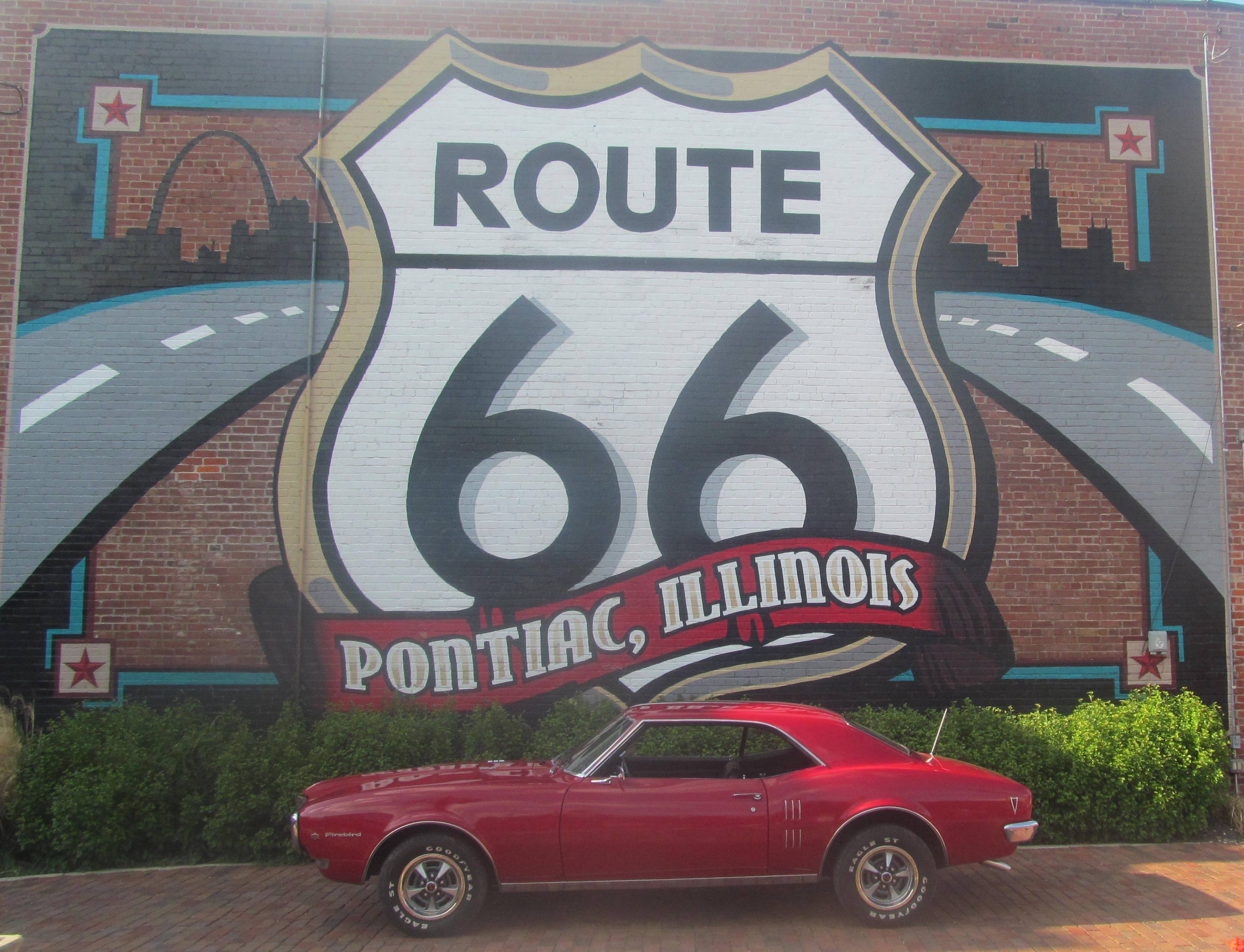 It was by far the best day trip our newly formed club has ever experienced together.  Our last post brought you the first part of our Spring Cruise down Route 66 in Northern Illinois.  Today focuses on our destination in Pontiac.  We want to start by saying a big “Thank You” to Ellie Alexander at the Pontiac Department of Tourism, and Tim Dye, the curator of the Pontiac Oakland Automobile Museum for all of their help and support in making this such a successful event!  We also appreciate all the help from club member and Pontiac native, Dave Sullivan, who’s red 1967 Firebird

400 convertible can be seen in numerous Route 66 advertisements and city brochures.

The town of Pontiac is an international travel destination, filled with small-town charm and several wonderful museums.  Mayor Bob Russell came out to personally welcome us to his city and made us feel special.  While we were in town, there was also a group from Brazil shooting a travel video to introduce Pontiac to the people of their country.  We would highly recomend taking a trip to Pontiac for a relaxing day or weekend of sightseeing and strolling through the city muruals, the Route 66 and Pontiac Oakland Auto museum, and the other museums this quaint town has to offer.

Several members from the Indy Firebird Club traveled three hours with their vintage and modern Firebirds, including a beautiful 1969 Trans Am.  Their President, Scott Andrews helped us set up a date-order Firebird line-up you will see below.

We’ve sprinkled in a few videos in this post, and here’s the first one as we are driving on Route 66, taken from the vantage point of Vernon’s 68 400 hardtop as he’s following behind Mike’s 1969 red convertible.    Vernons Driving video 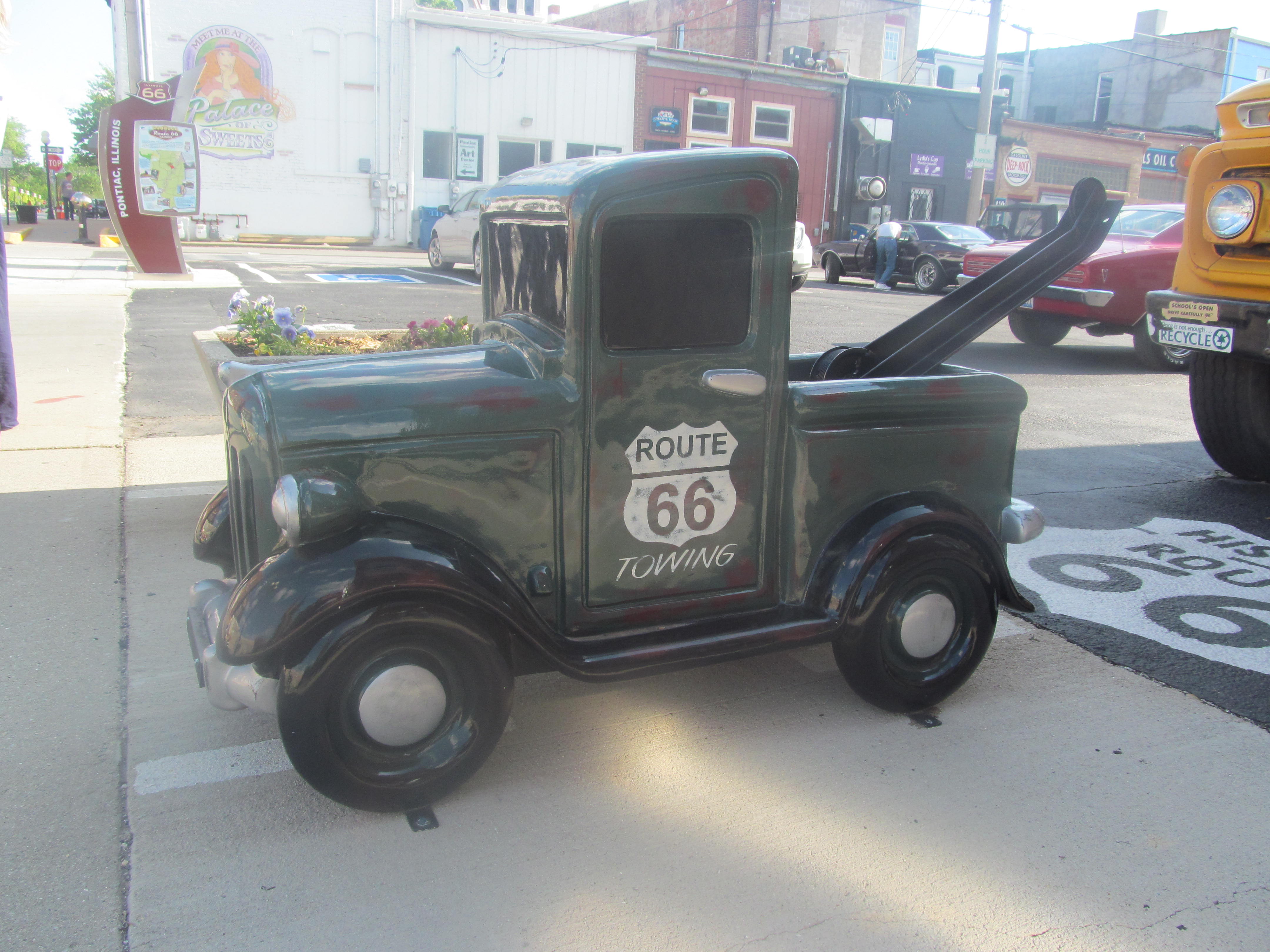 Minature cars are all around – like this one paying homage to Pontiac’s connection with Route 66. 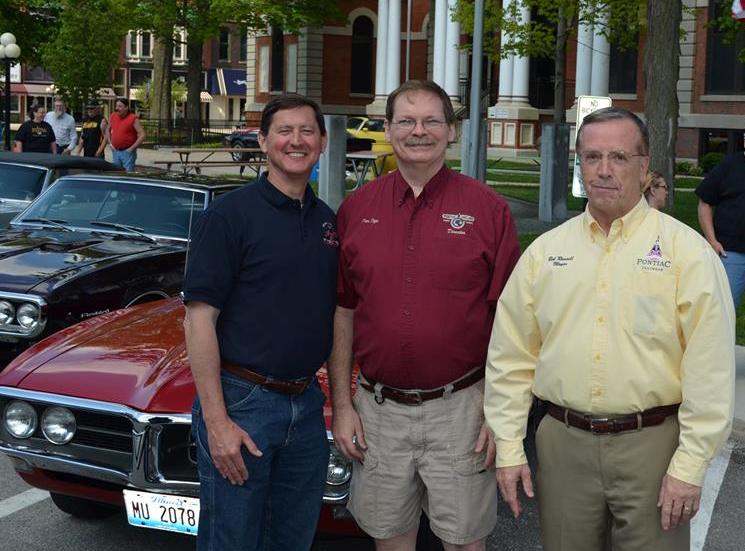 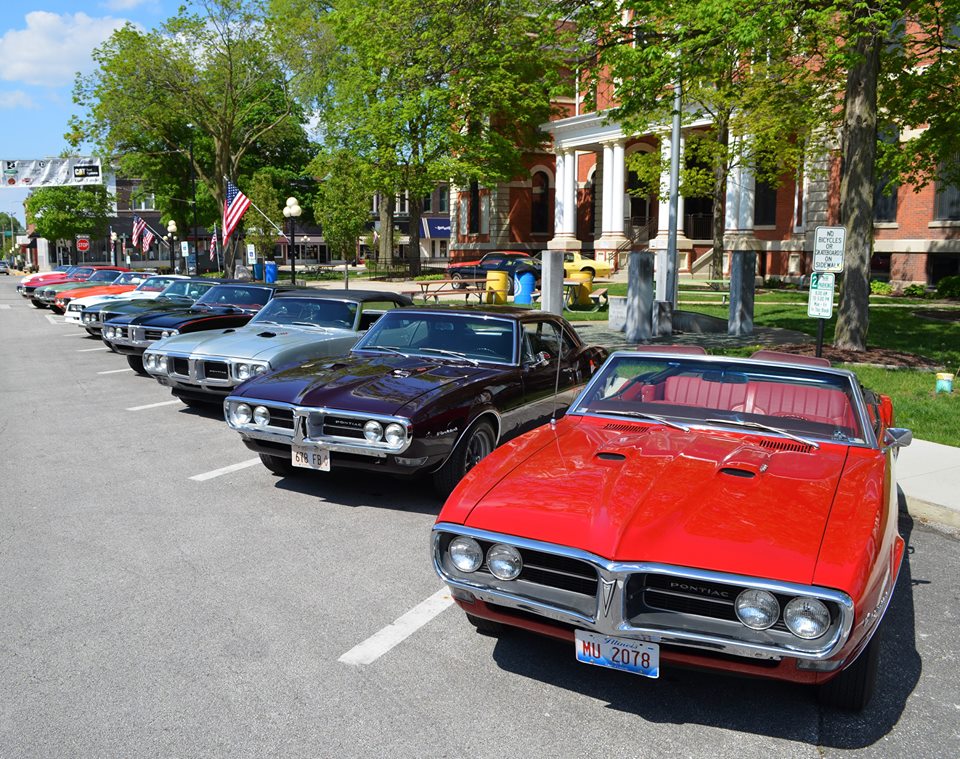 Thirteen club members came on the cruise, including ten of our first gen Firebirds. 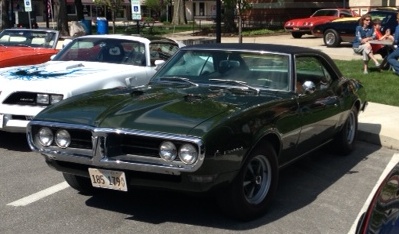 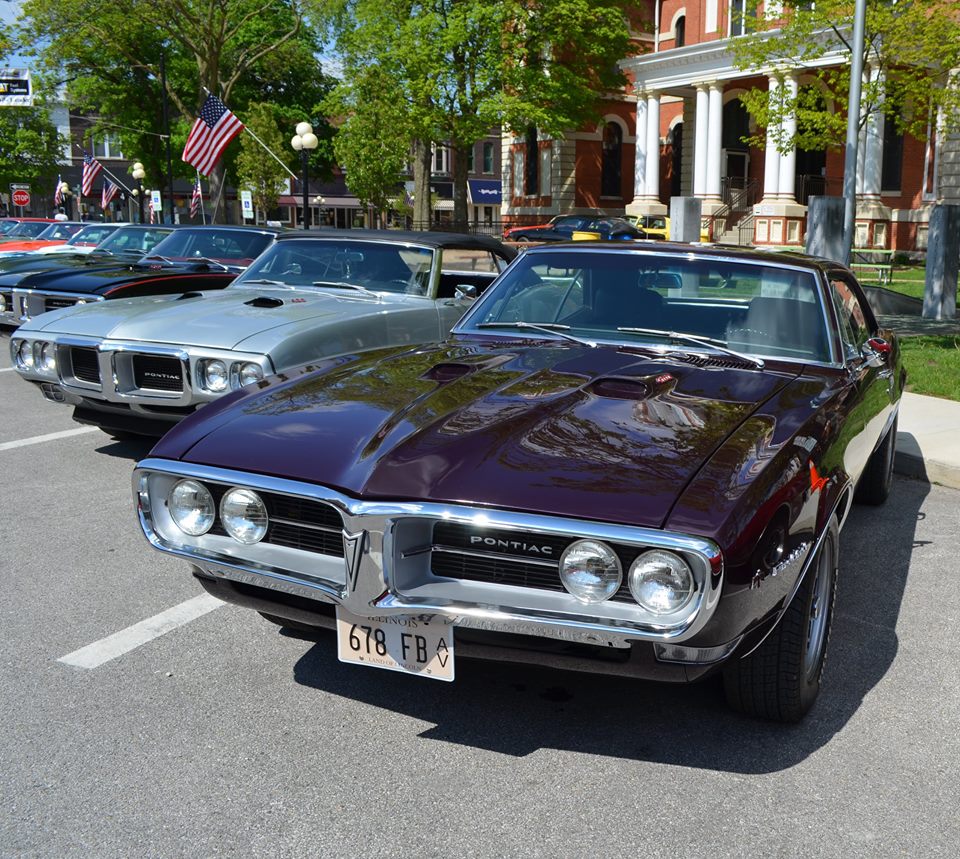 Mike Mac’s beautiful Plumb Mist 400 Firebird. Notice the side wing window and the wrap-around side marker lights. So is it a ’67 or a “68? 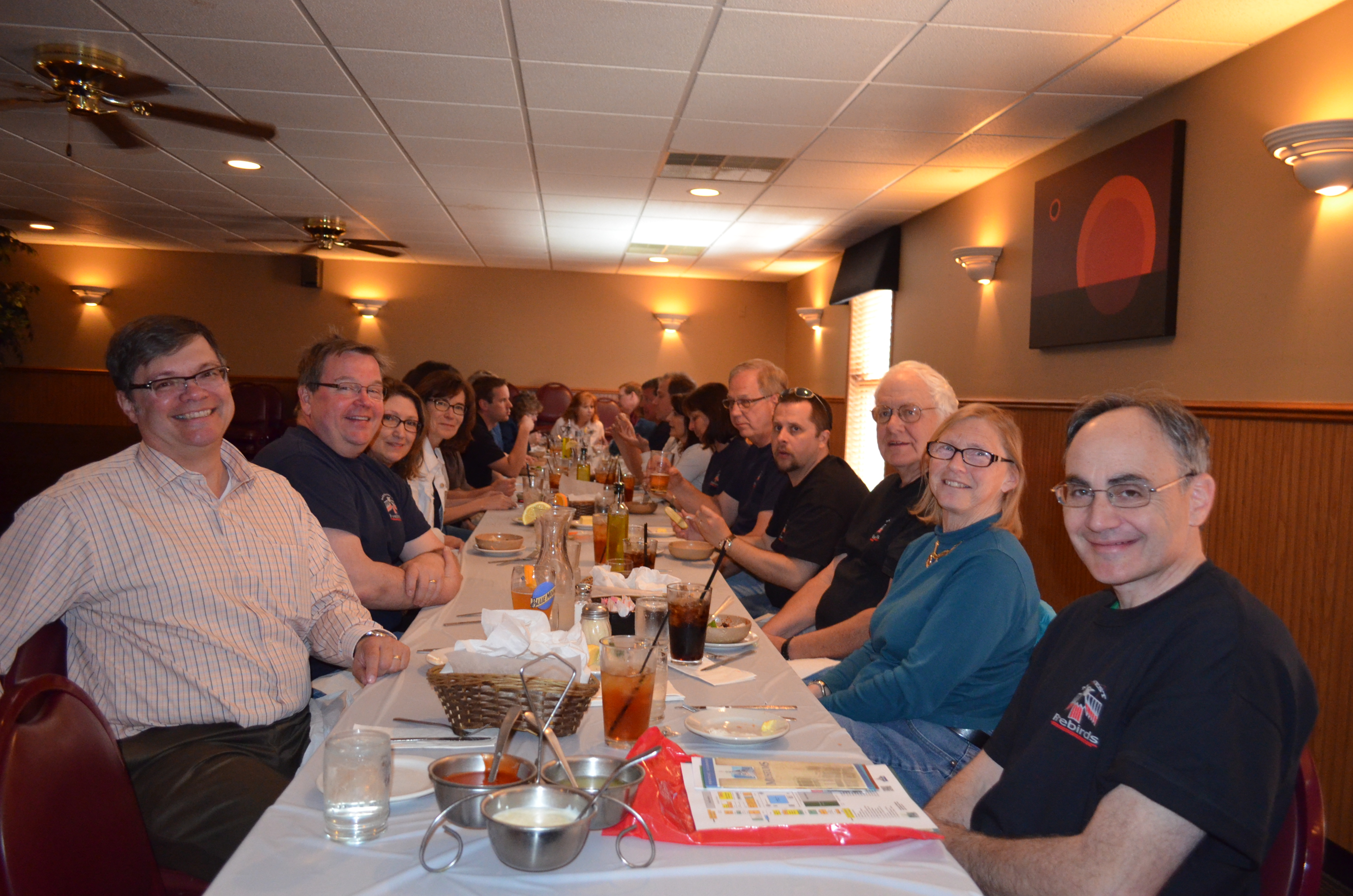 After a long cruise, everyone was hugery for a terrific meal at Bernardi’s on the square. One of the finest restaurants in Pontiac!

Our second video features the Indy Firebirds and our cars arriving in Pontiac:  http://www.youtube.com/watch?v=XumFAdLAtr8&feature=youtube_gdata_player 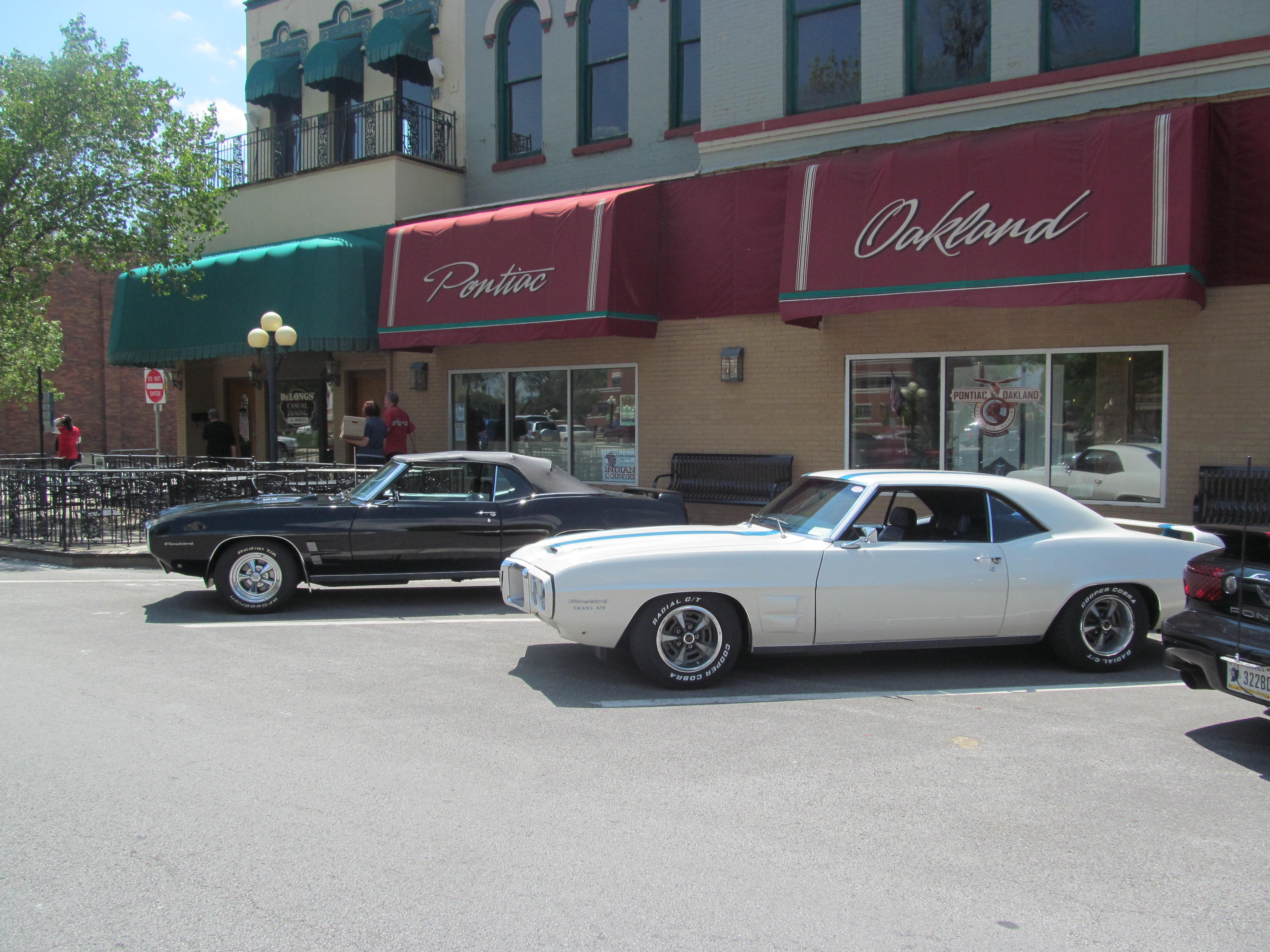 The Indy Firebird Club drove about 3 hours to join us at the museum. Here we see a beautifuly restored 1969 triple black 400 convertible and a rare 1969 Trans Am. 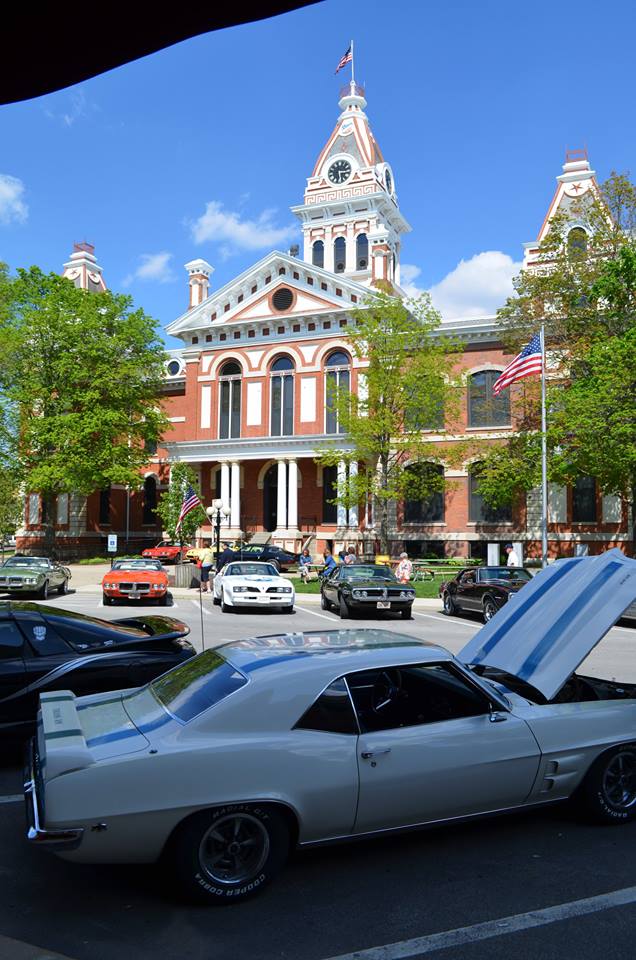 The Pontiac courthouse framed in Firebirds on this warm Spring day! 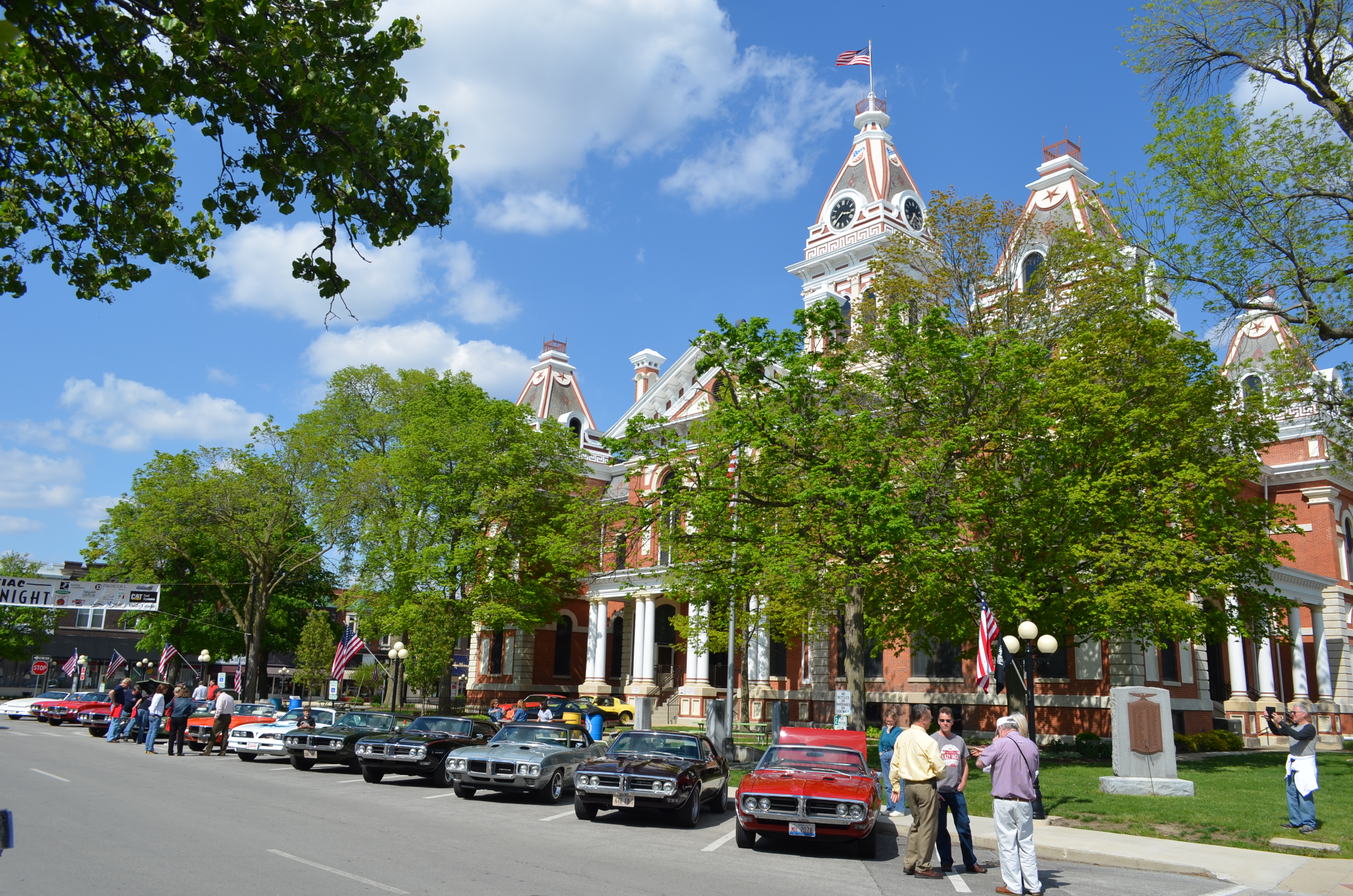 Fifteen first, second and third generation Firebirds by the courthouse, and everyone having a great time! 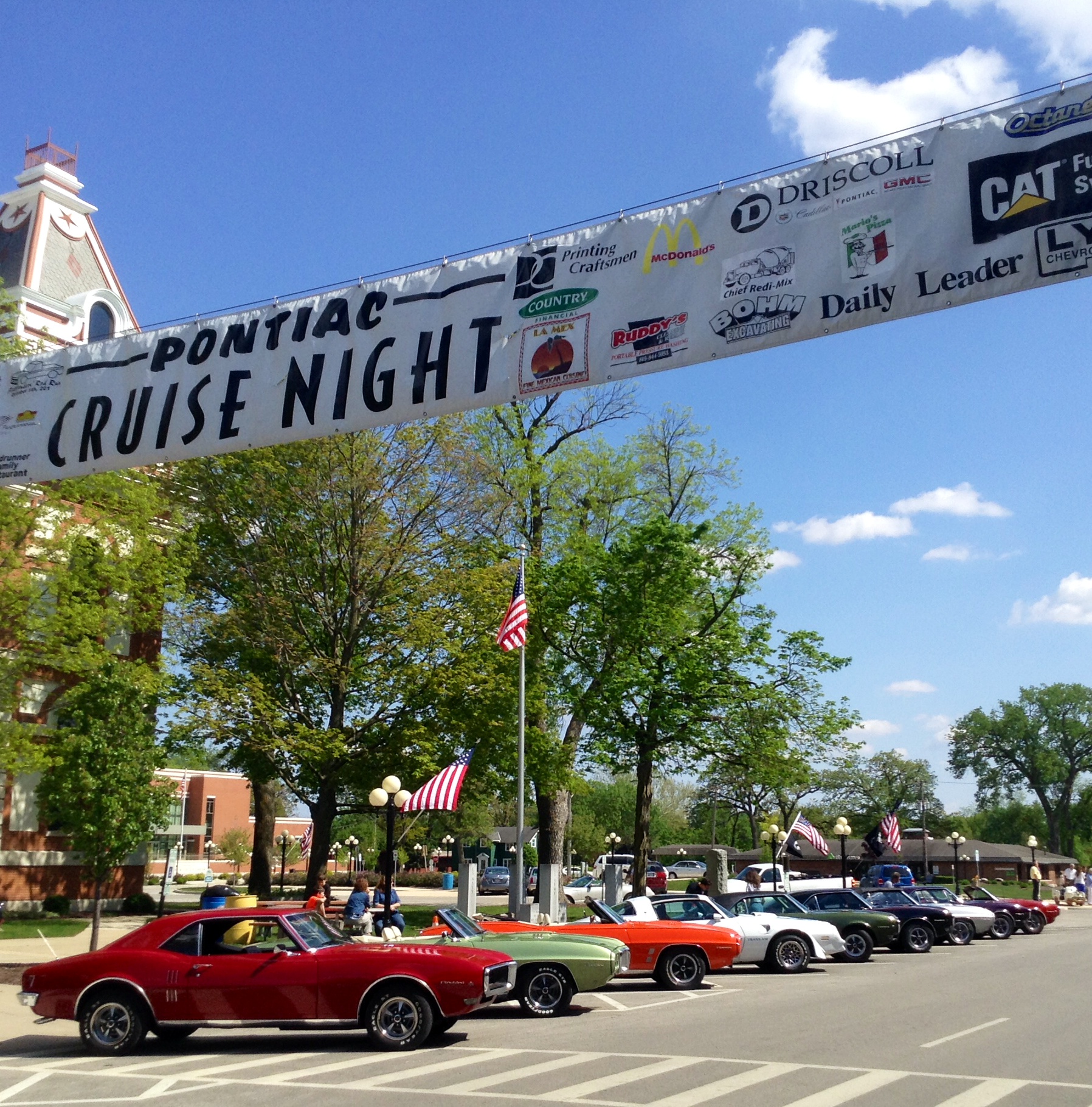 There’s nothing better than a big, blue sky, American flags waiving and Pontiacs in Pontiac. 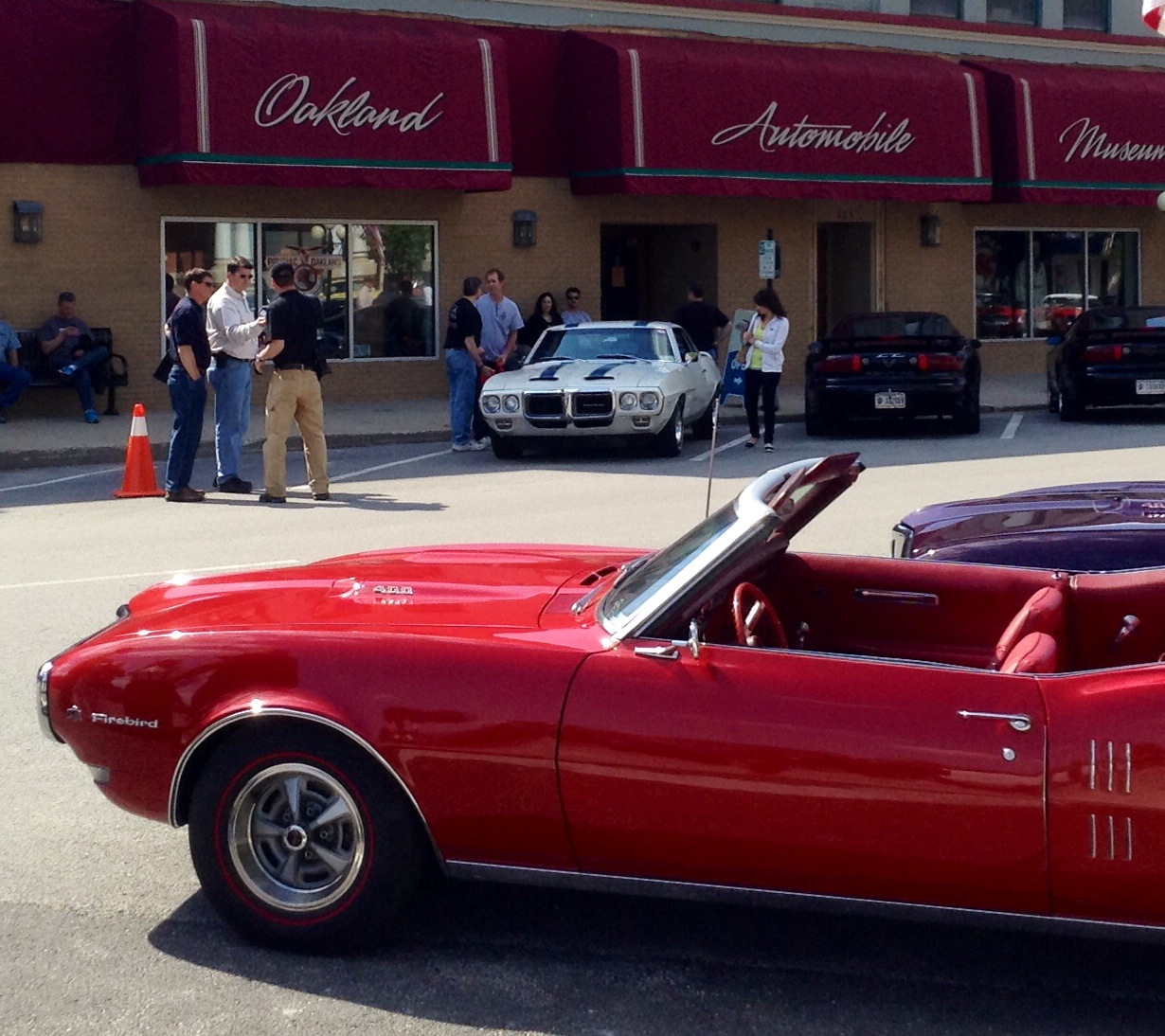 Indy Firebird Club President, Scott Andrews discussing his vision for lining up the Frebirds for a shot with our Media Director, Matt Avery. 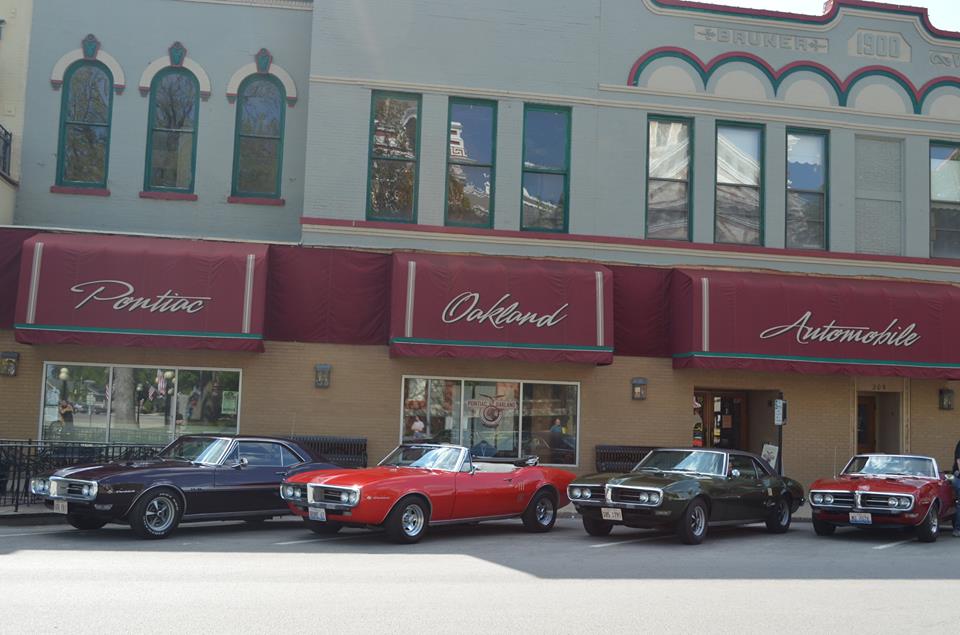 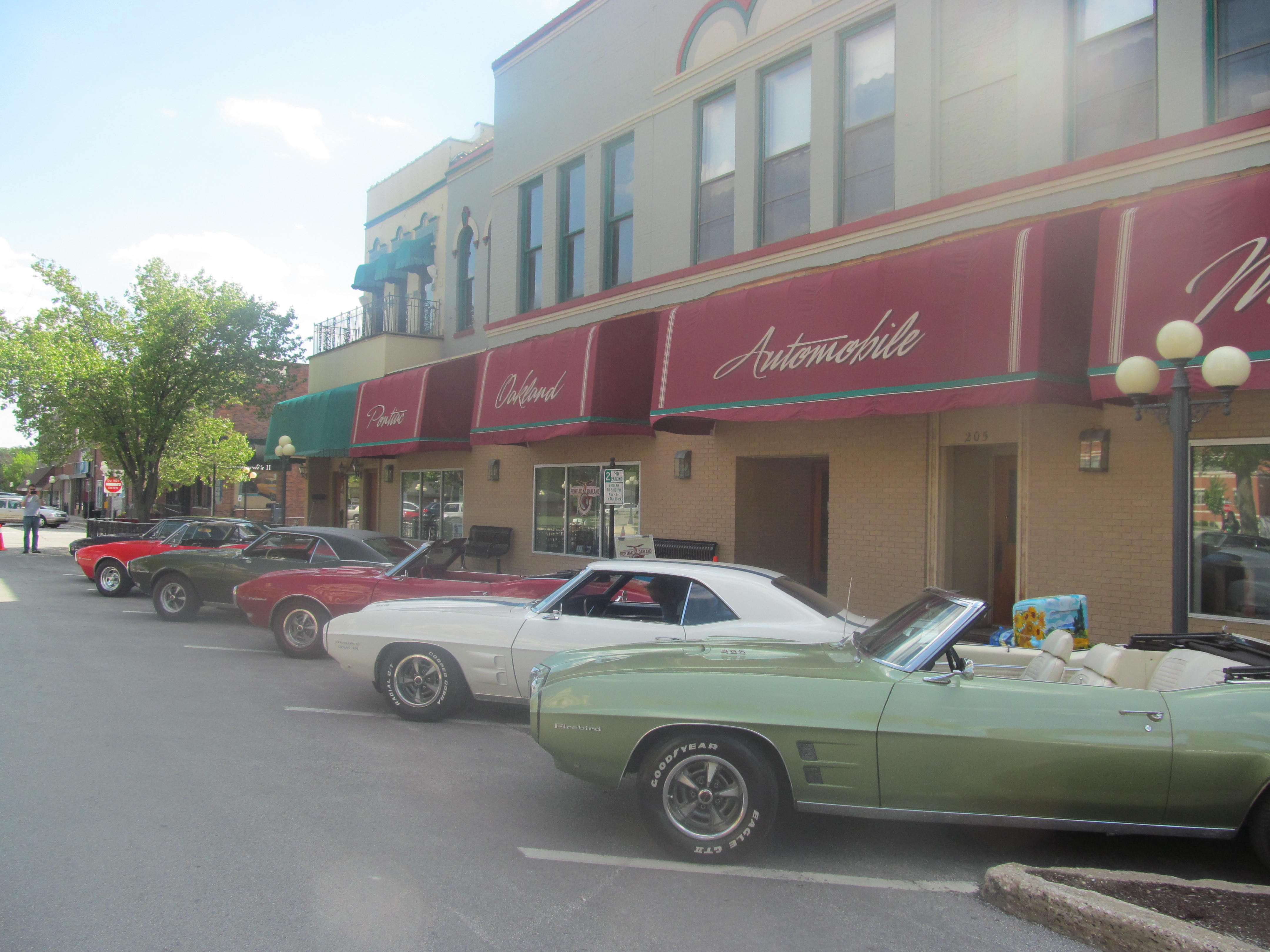 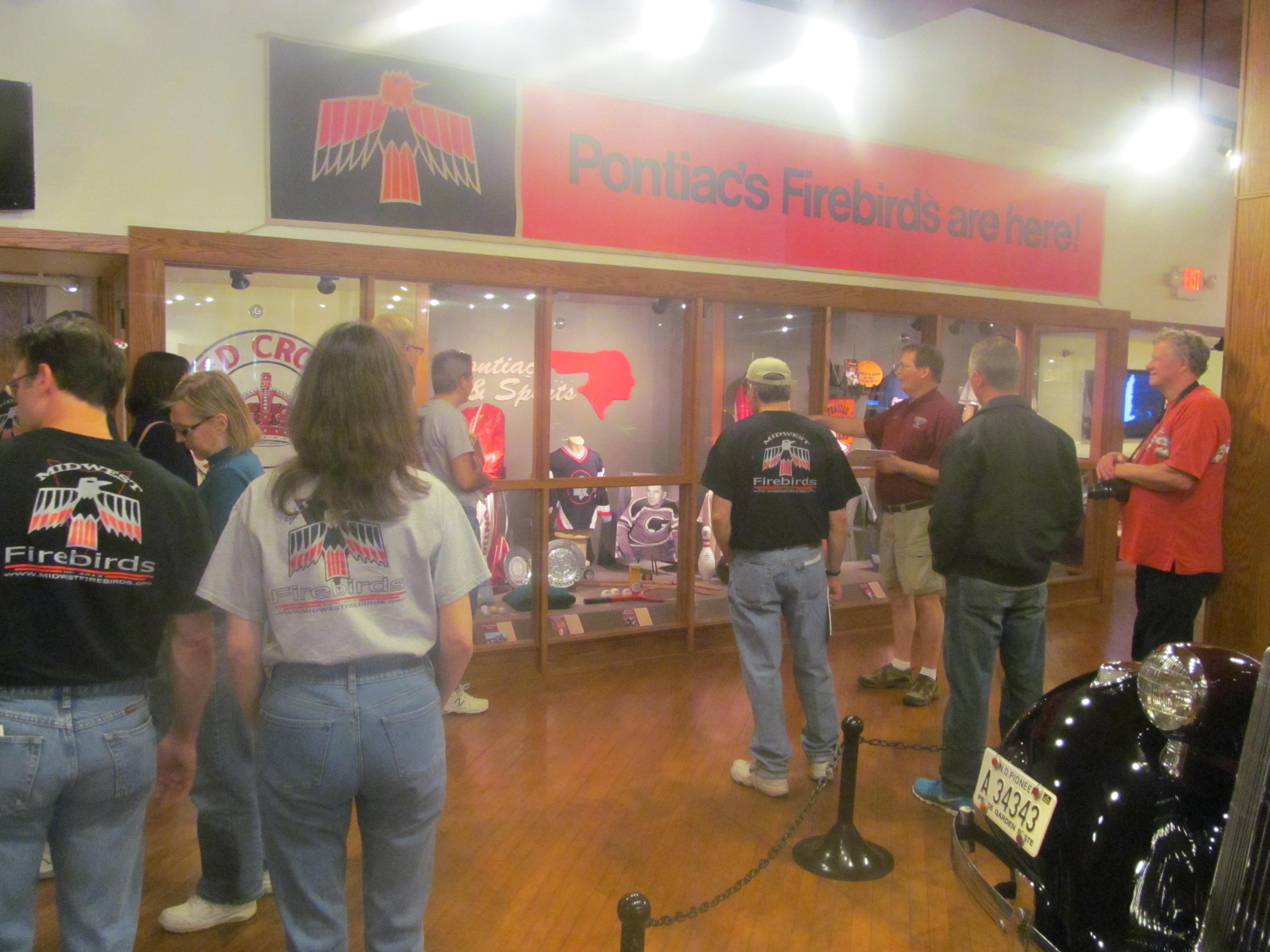 Tim Dye discussing details in his Firebird display as we tour the museum. 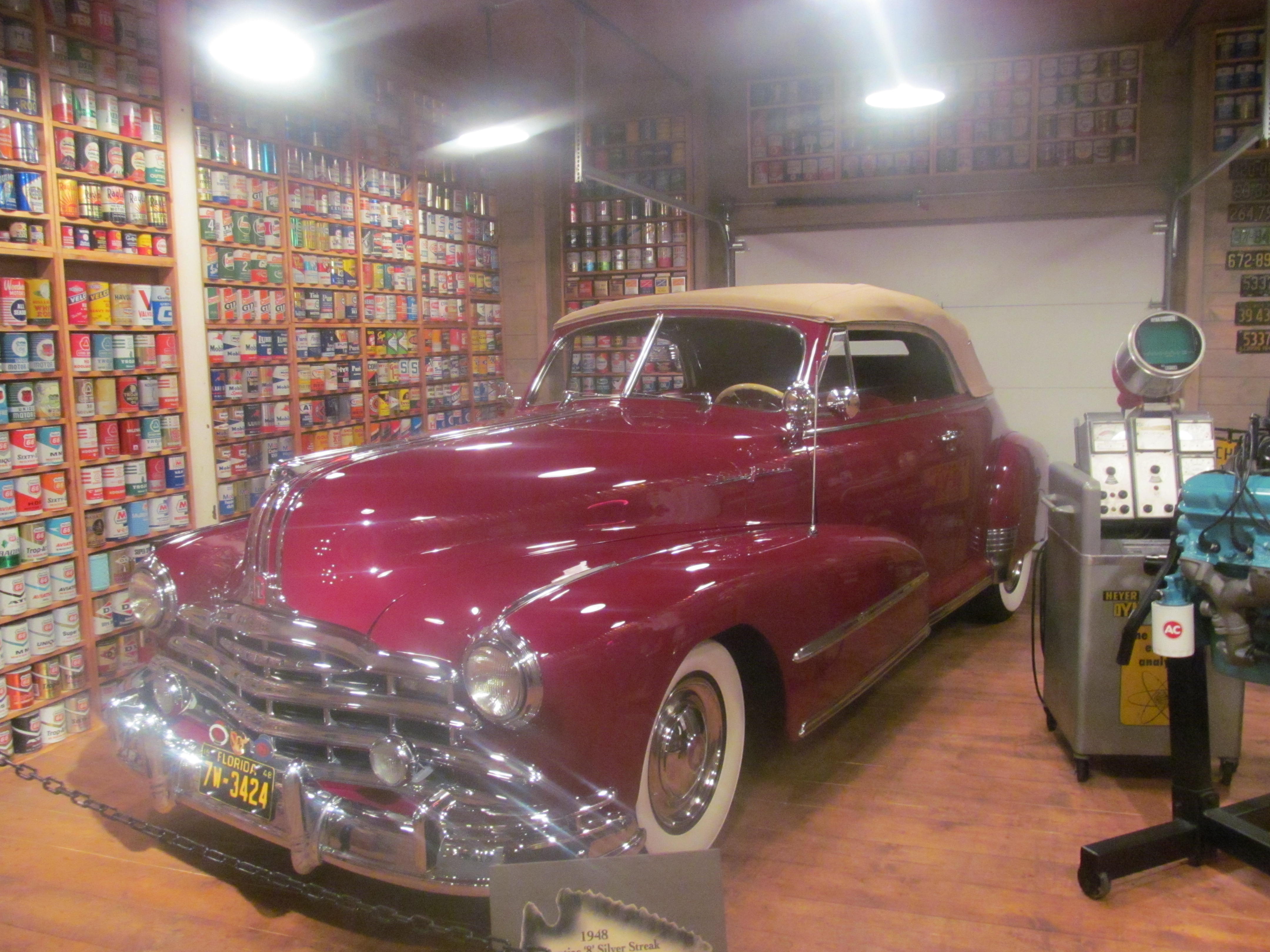 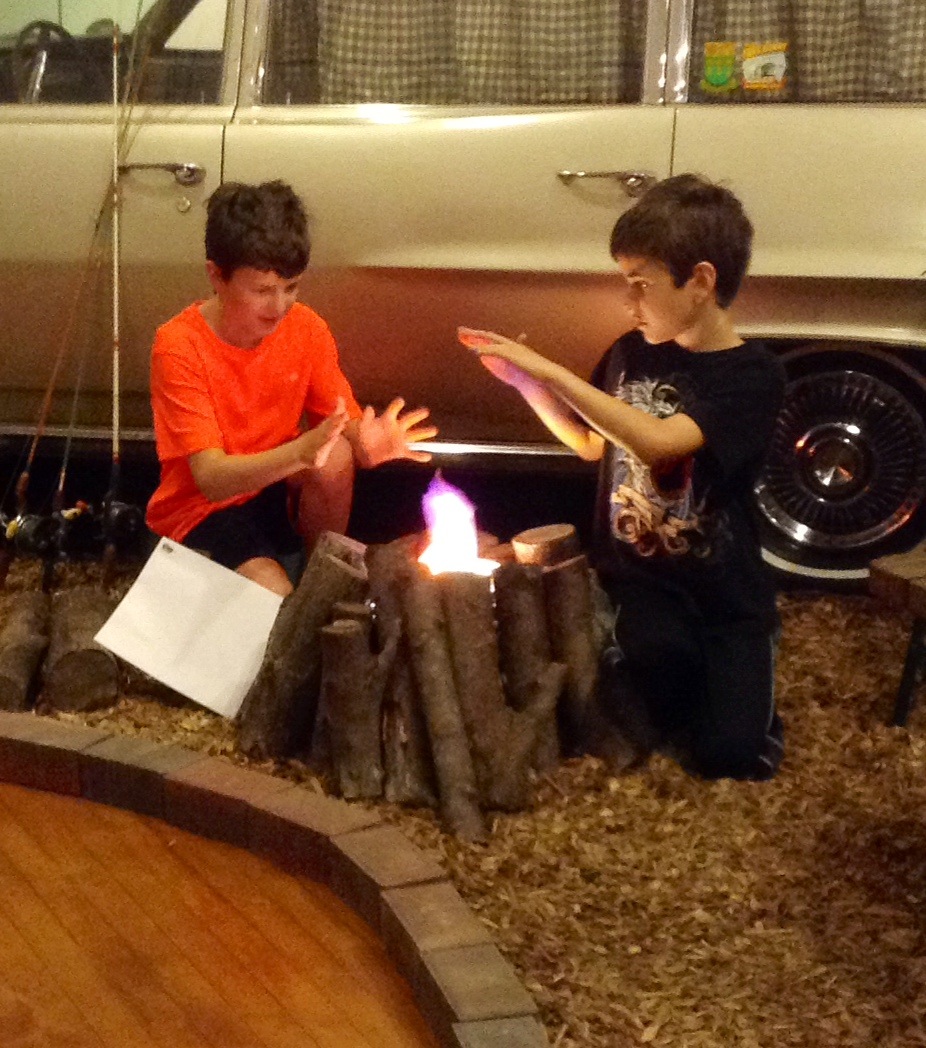 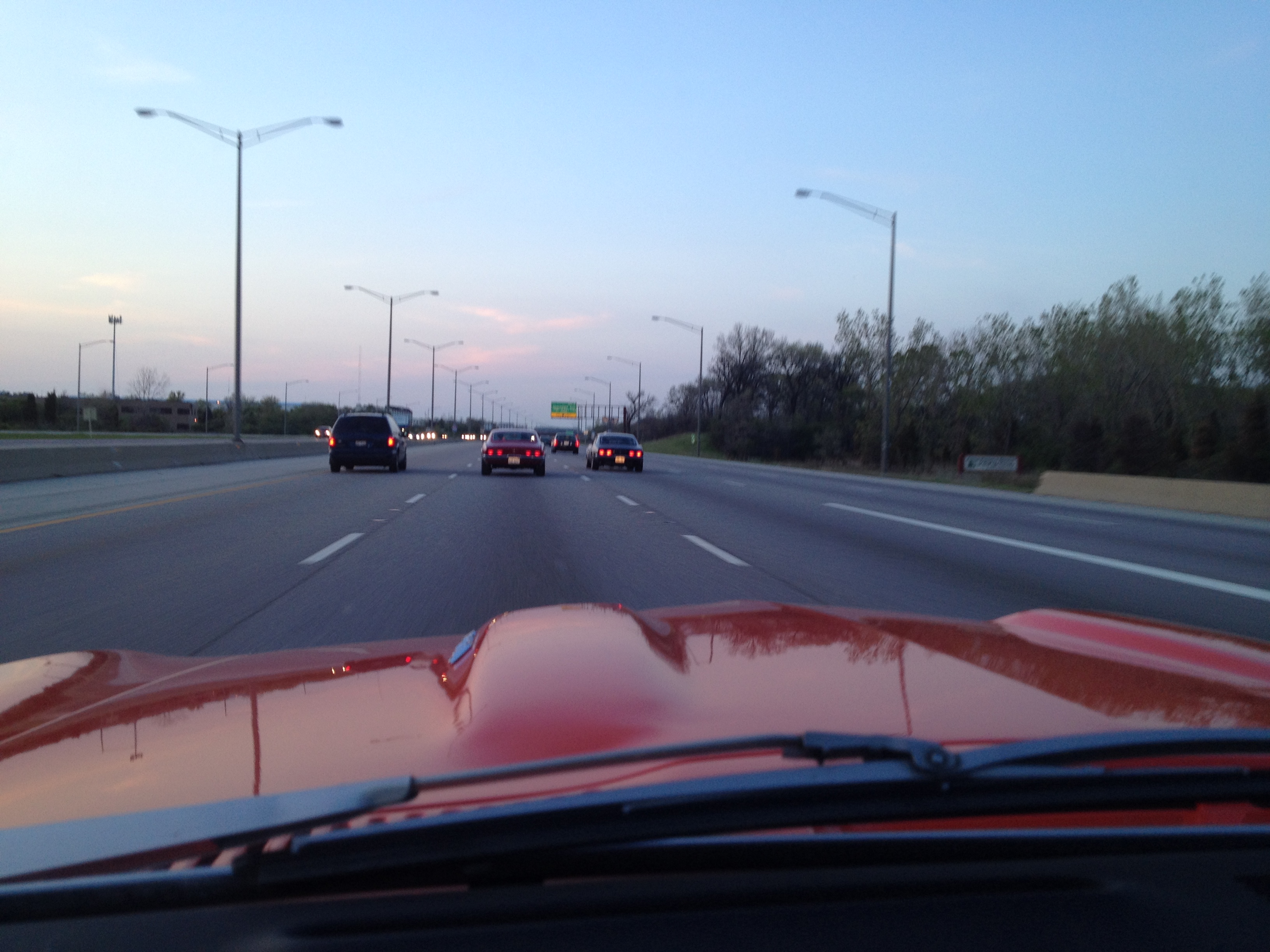 Mike’s Carousel Red 1969 Firebird, framing the drive back home at the end of a great day.

We had such  fantastic time in Pontiac we can’t wait to come back!  This day trip went very smoothly and we had no mechanical breakdowns.  I also love the reactions we got from several people as we passed through their towns, or when we had our cars parked and people just stopped and got out of their cars and took pictures of us.  Our club is all about getting out together and enjoying our classic automobiles.  Please join us on our next cruise as we head out West later this summer, and then back to Lake Geneva, Wisconsin in the Fall.