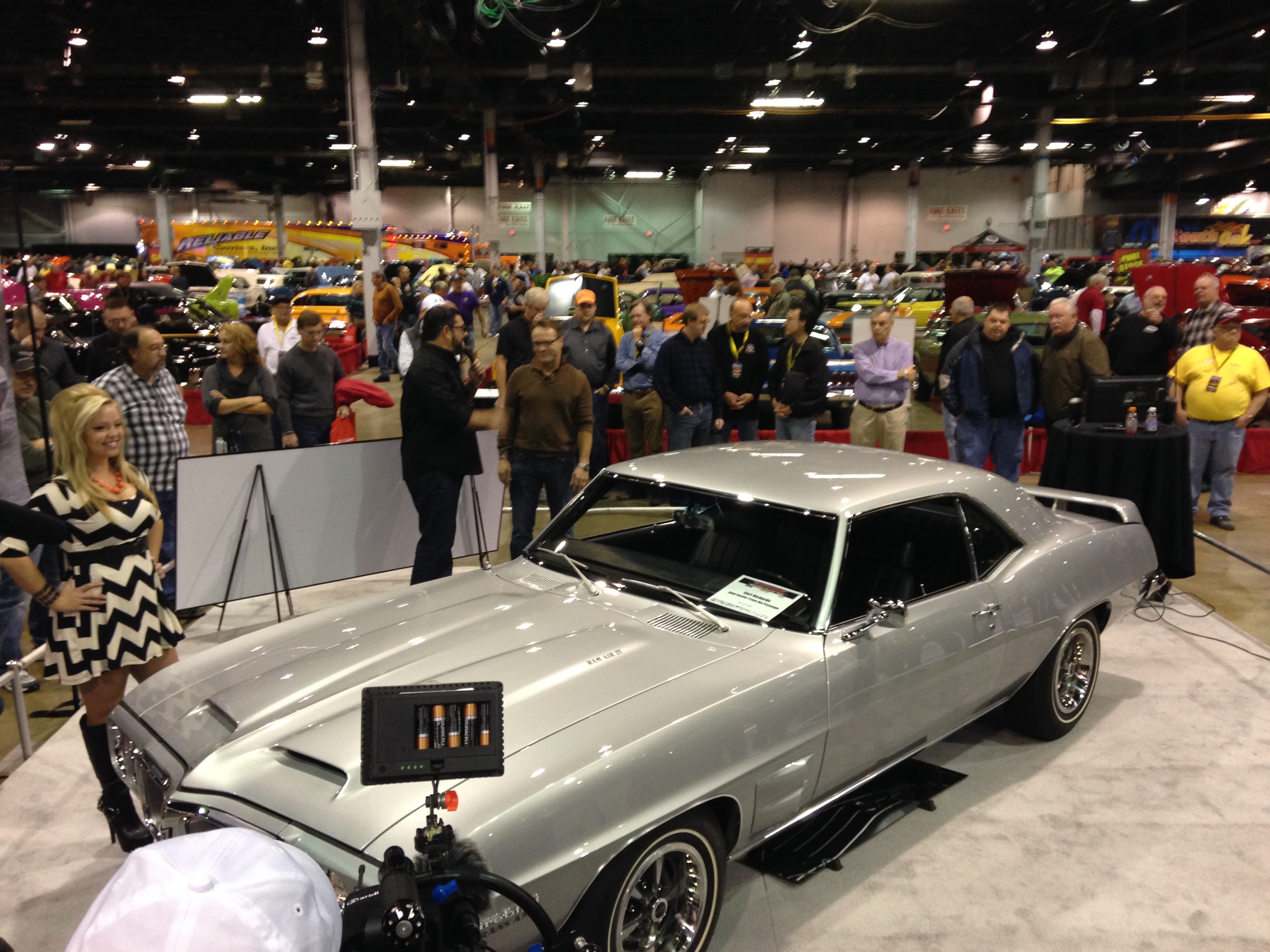 The Muscle Car and Corvette Nationals, held in Rosemont Illinois is one of the premier events of the year for the finest collector muscle cars ever produced – and surprisingly it’s only in its 6th year!  Muscle Car Review calls this show “The Pebble Beach of Muscle Cars”  for good reason, as we were witness to the very best of the best of American muscle from the 50’s, 60’s and 70’s.  Two of our own Midwest Firebird’s members displayed their cars and we had ten more members walking the show Saturday.

Organizer, Bob Ashton and his enthusiastic team have done another outstanding job of blending creativity with function in this year’s show.  I was blown away by the various themed areas like the display of every color available of the 1969 Boss 429 Mustang.  The Chevy L89 Invitational display, the 50th anniversary celebration of the GTO, Mustang & 426 Hemi engine, the Original Pace Cars display …. The list goes on and on.

I really enjoyed the “Barn Finds and Hidden Gems” area in particular.  It was packed with people thinking to themselves how they would restore the rusty, broken down cars before them into beautiful show cars. 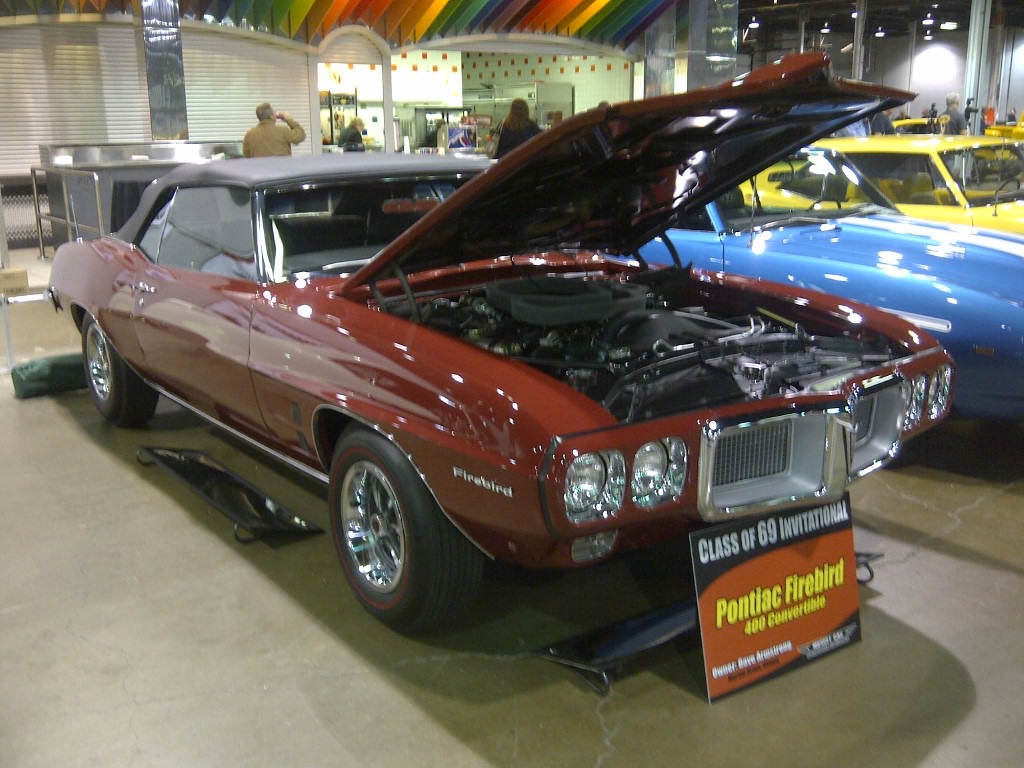 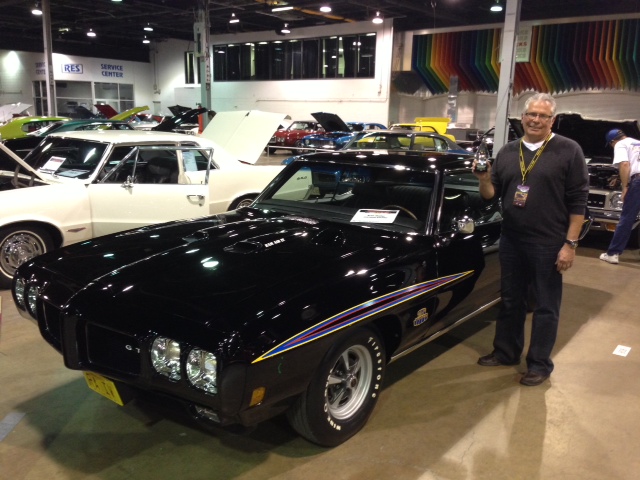 Also outstanding was the National unveilings of some very significant Muscle cars on Saturday morning.  We witnessed the reveal of the 1969 Trans Am prototype, the 1972 one of one Adriatic Blue Trans Am, and one of only 5 made – 1969 Ram Air IV automatic convertible Firebirds.  We will primarily highlight some of our favorite non-Firebirds in this story and then get into the details and many more pictures of the Firebirds in the next post. 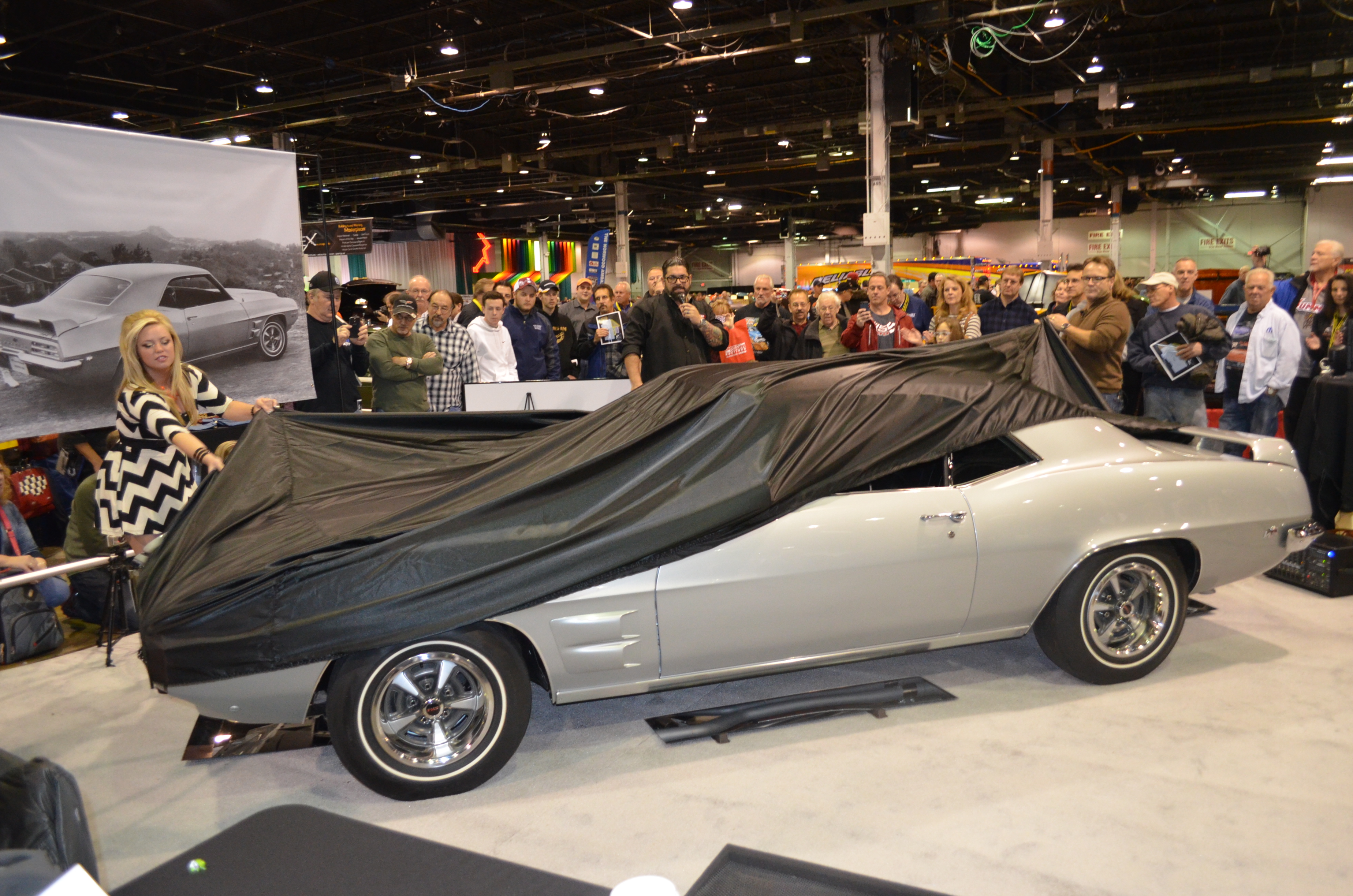 Owner Curt Richards and friend, unveiling the 1969 Trans Am prototype as Dennis Pittsenbarger, of the Discovery Channel discusses the significance of this car. 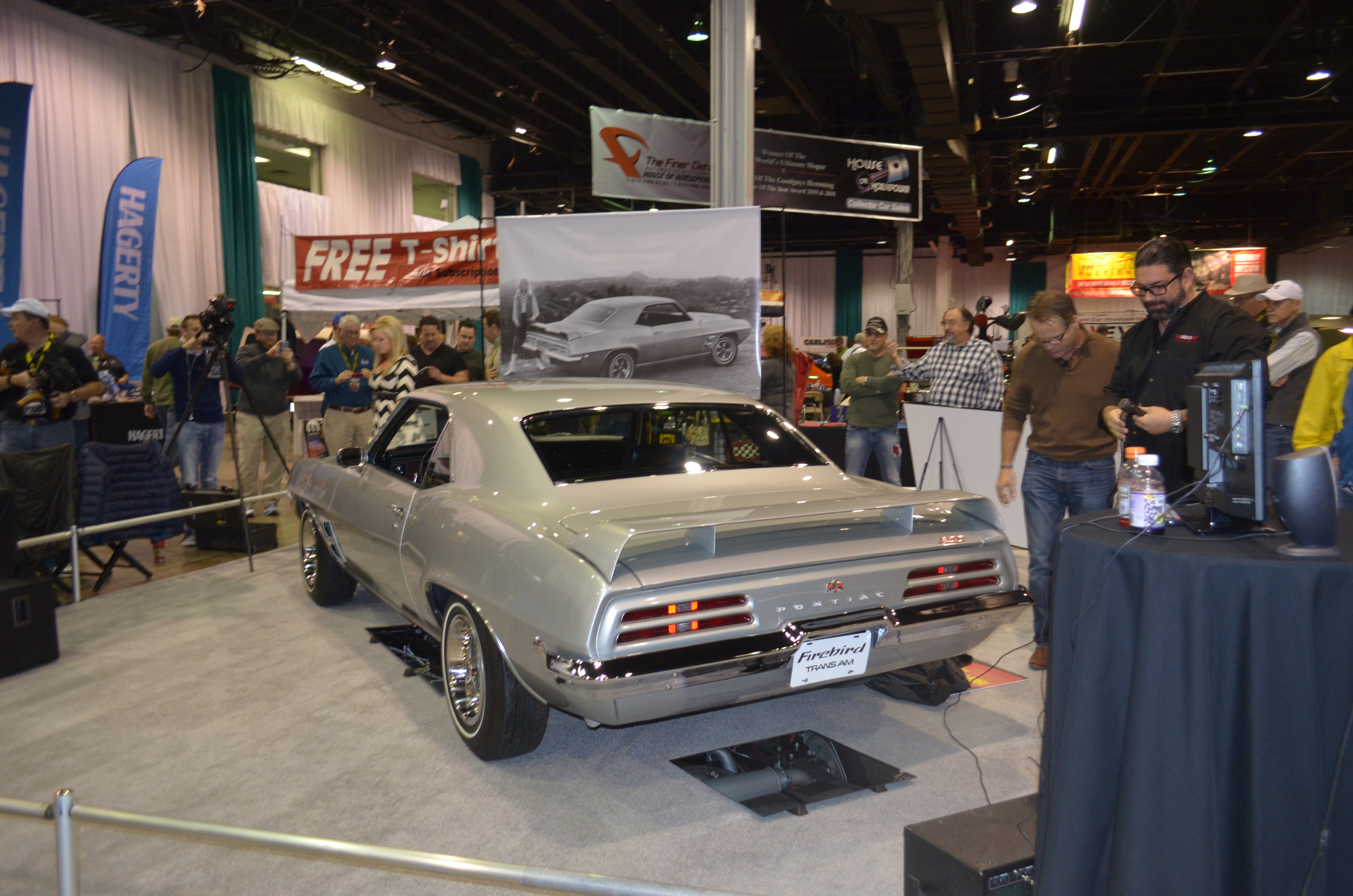 More to come about this Firebird in our next story, but I will tell you the Scott Tiemann’s restoration was perfect and the Silver paint was gorgeous. 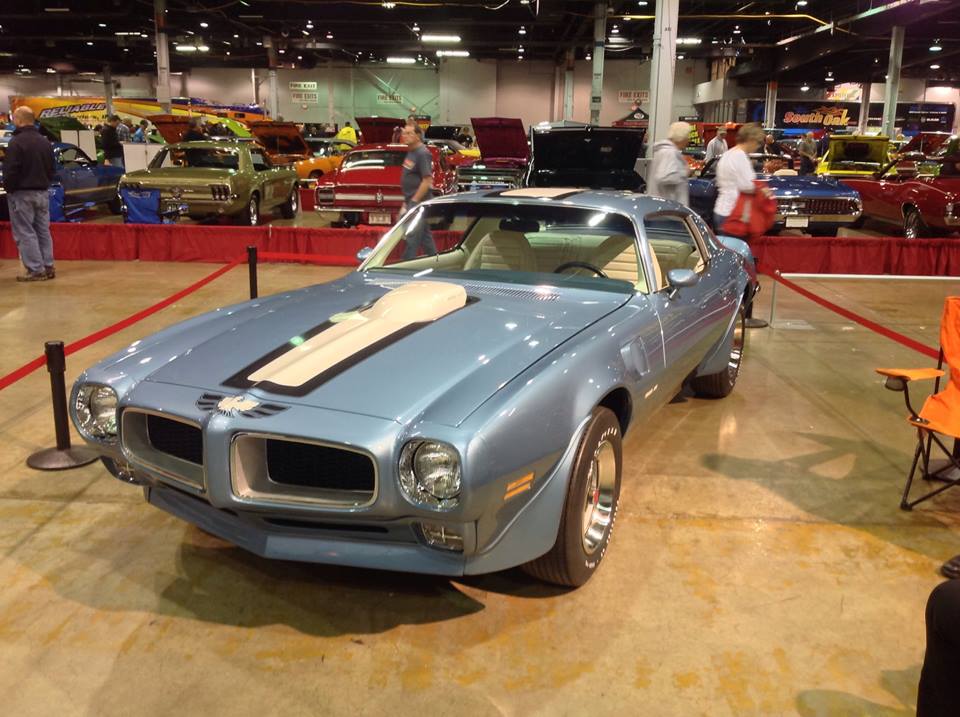 If you’re thinking the color looks off on your computer – there’s no problem, that’s the point on this 1972 Trans Am. It is the only one that was special ordered in Adriatic Blue. Speaking with the owners, I found out there are 5 one of one special colors that are known to exist. The Red one is the most famous. 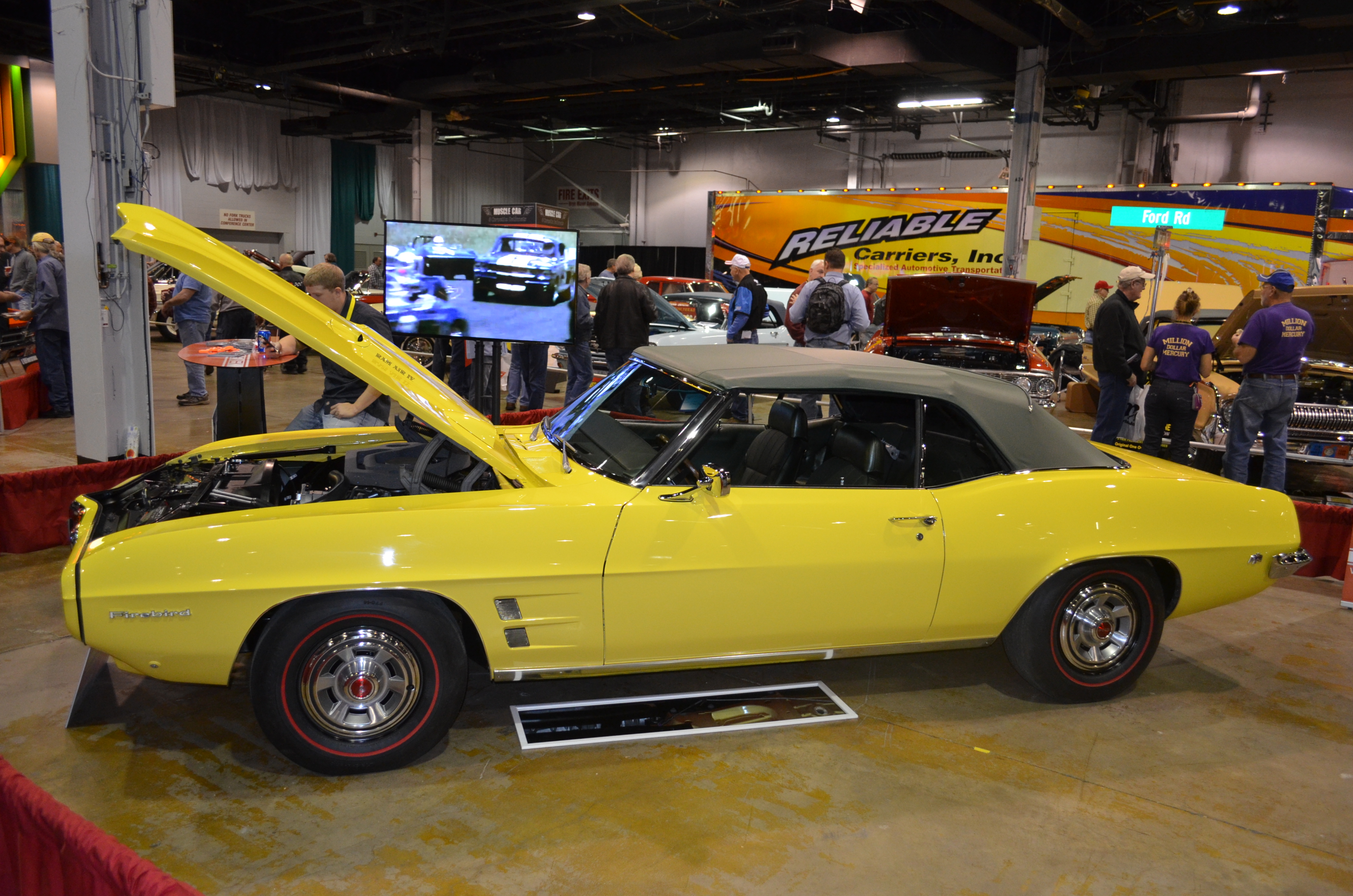 This Goldenrod Yellow 1969 Firebird 400 convertible, was unveiled Saturday. It is one of five convertible Firebirds that came factory equipped with a Ram Air IV engine and an automatic transmission. Level One Restoration in Denver did the concourse restoration on this beauty! 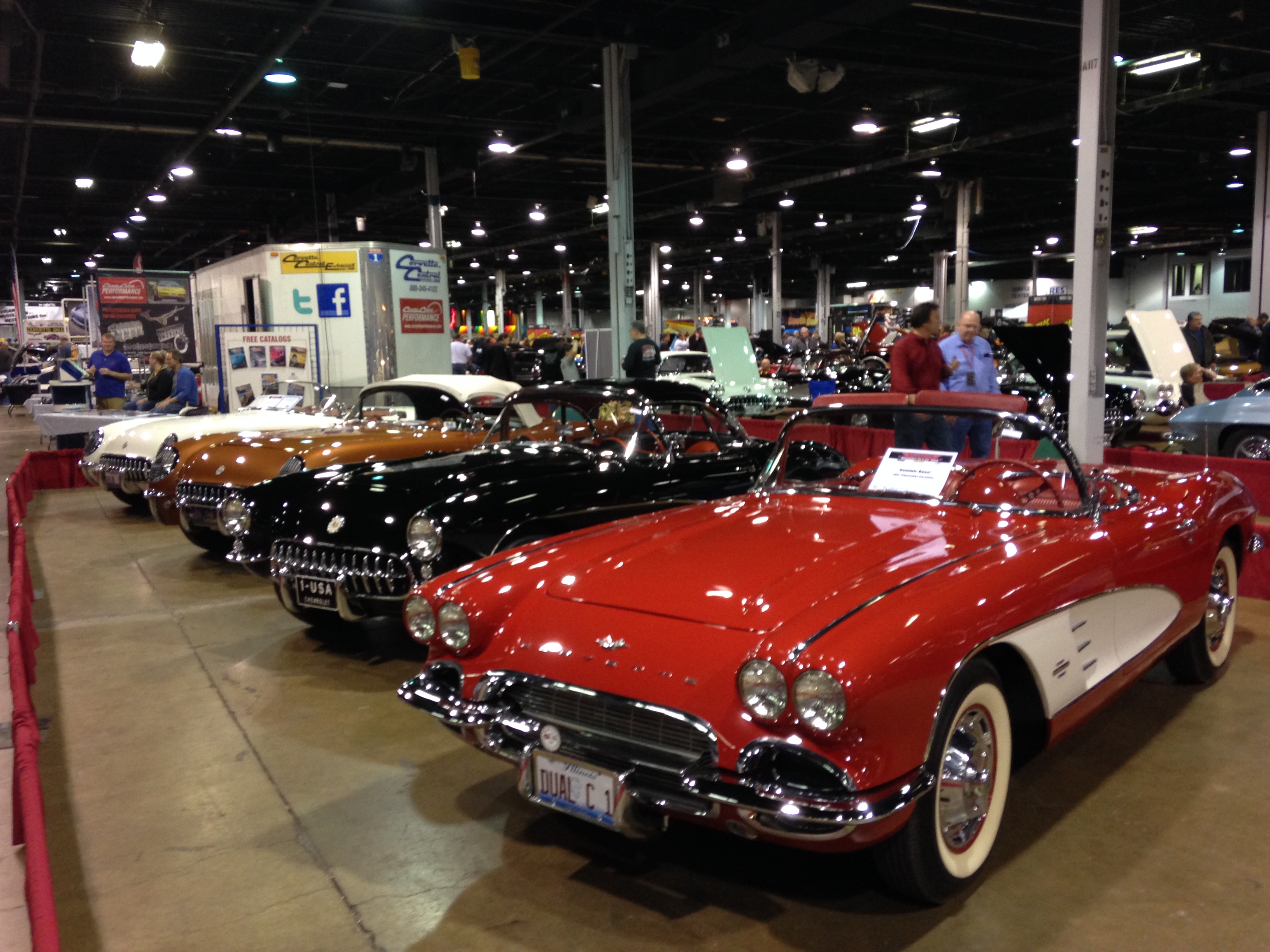 Of course, there were lots of great looking Corvettes as you would imagine – these being some of the fiirst C1’s from the ’50s. 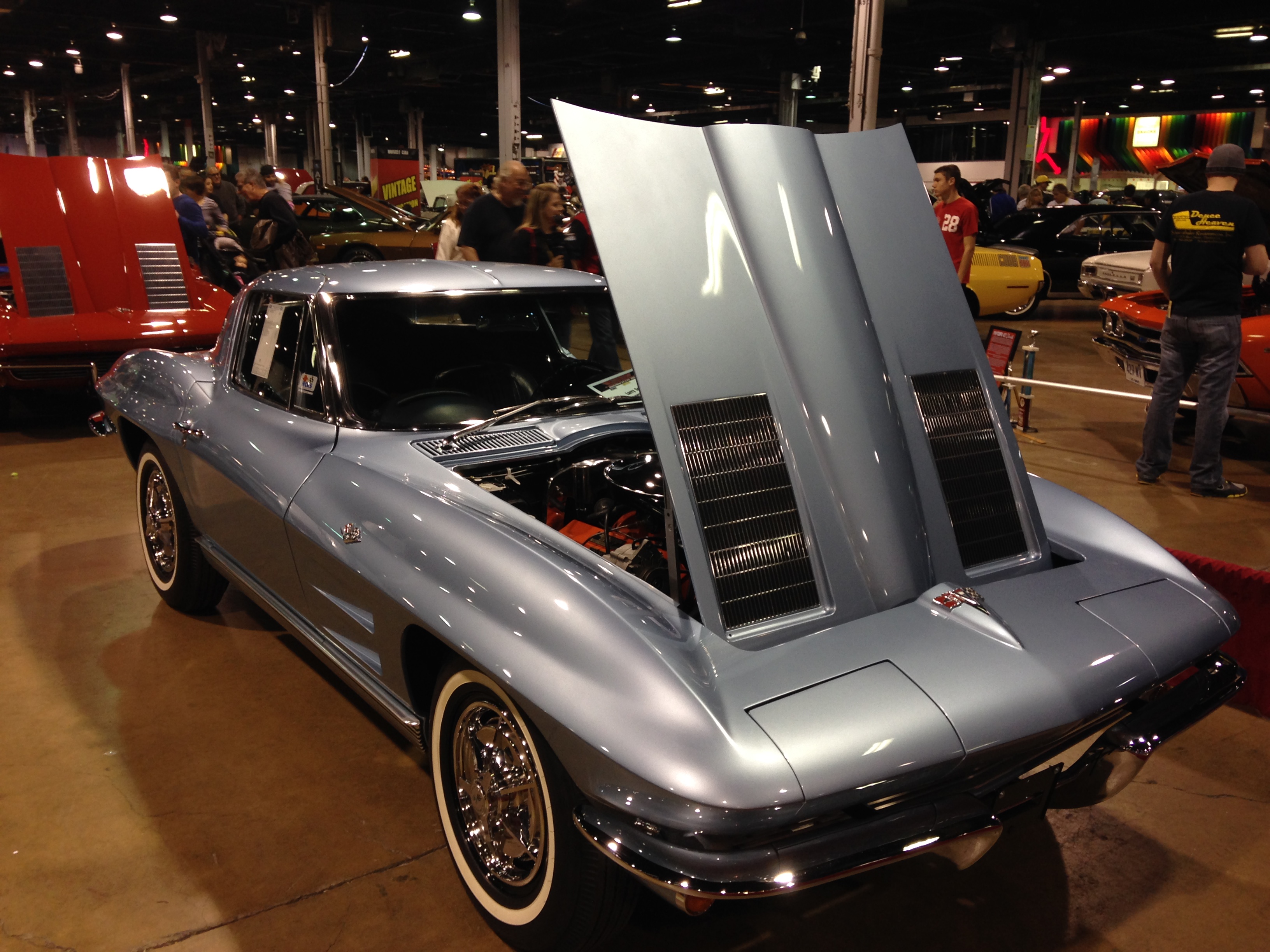 This is perhaps my favorite Corvette of the show. I just love this 1963 in Sliver Blue color. 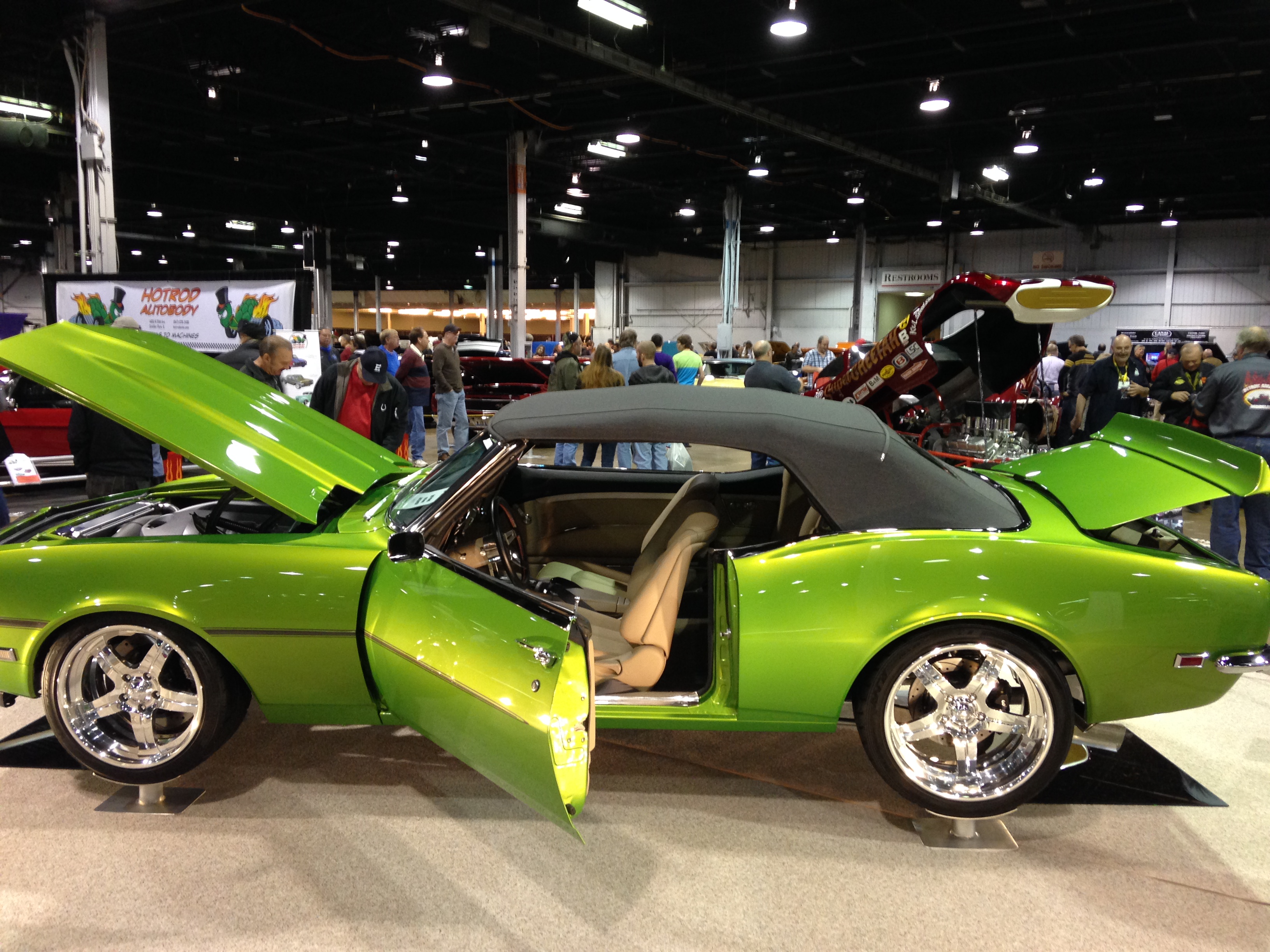 Wow, the paint job on this 1968 Camaro convertible restomod was outstanding, and a great representation of the exotic modified cars that were there. 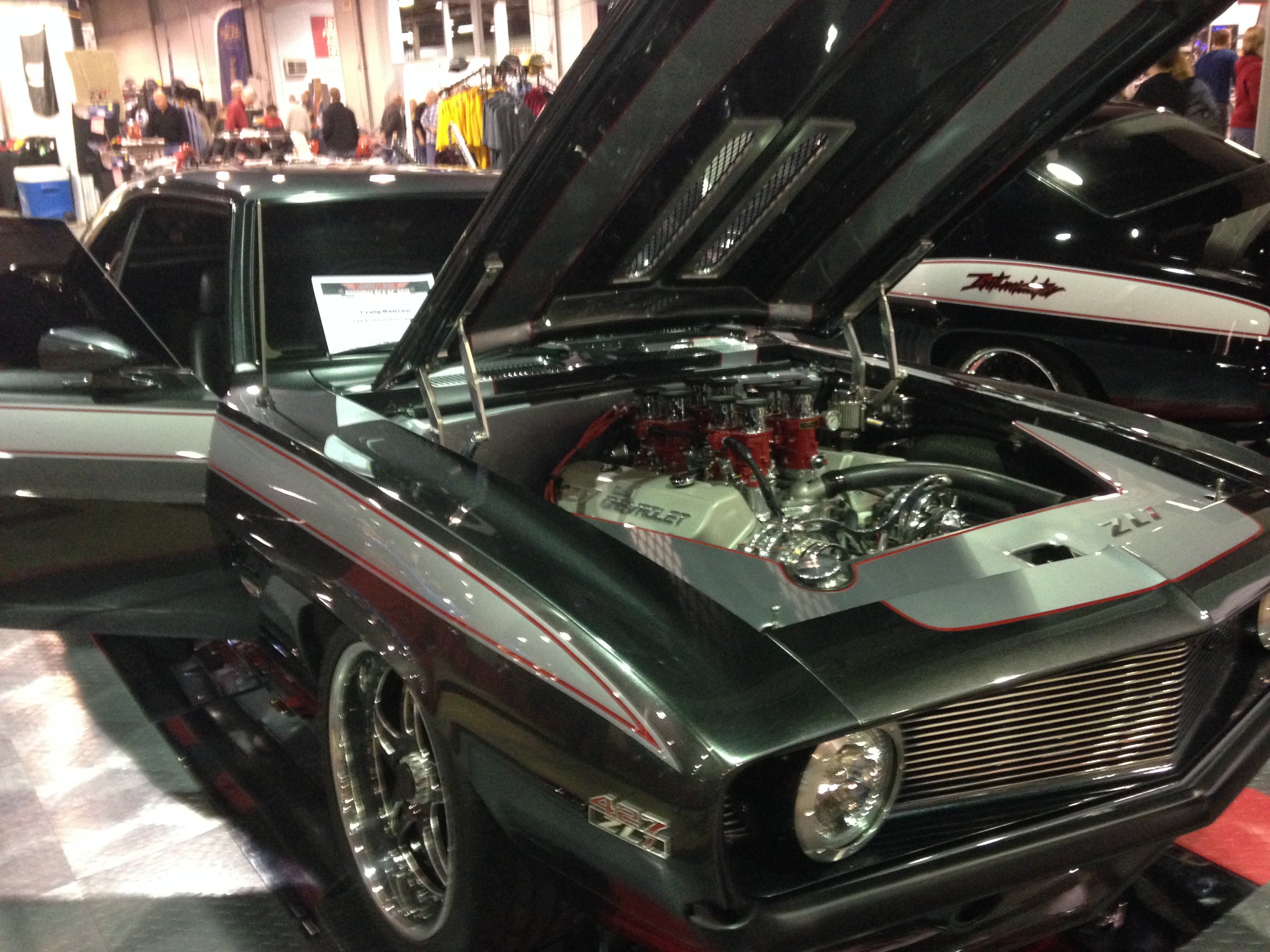 We were really impressed with the mechanics of these two 1969 Camaro restomods – 427 ZL1 horsepower! 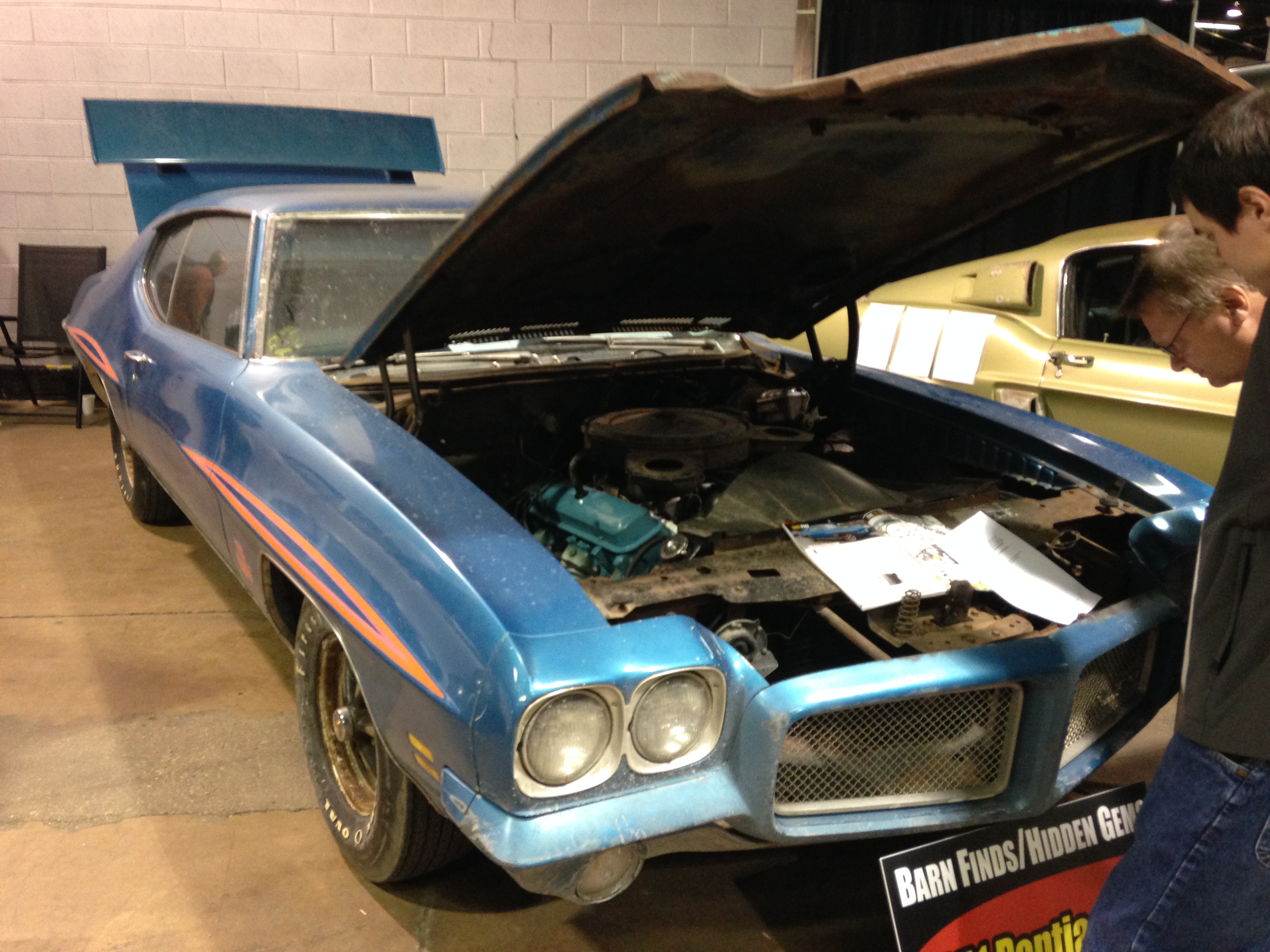 One of the most popular and unique areas of the show this year was the Barn Finds and Hidden Gems. Check out this ’71 Pontiac Judge. 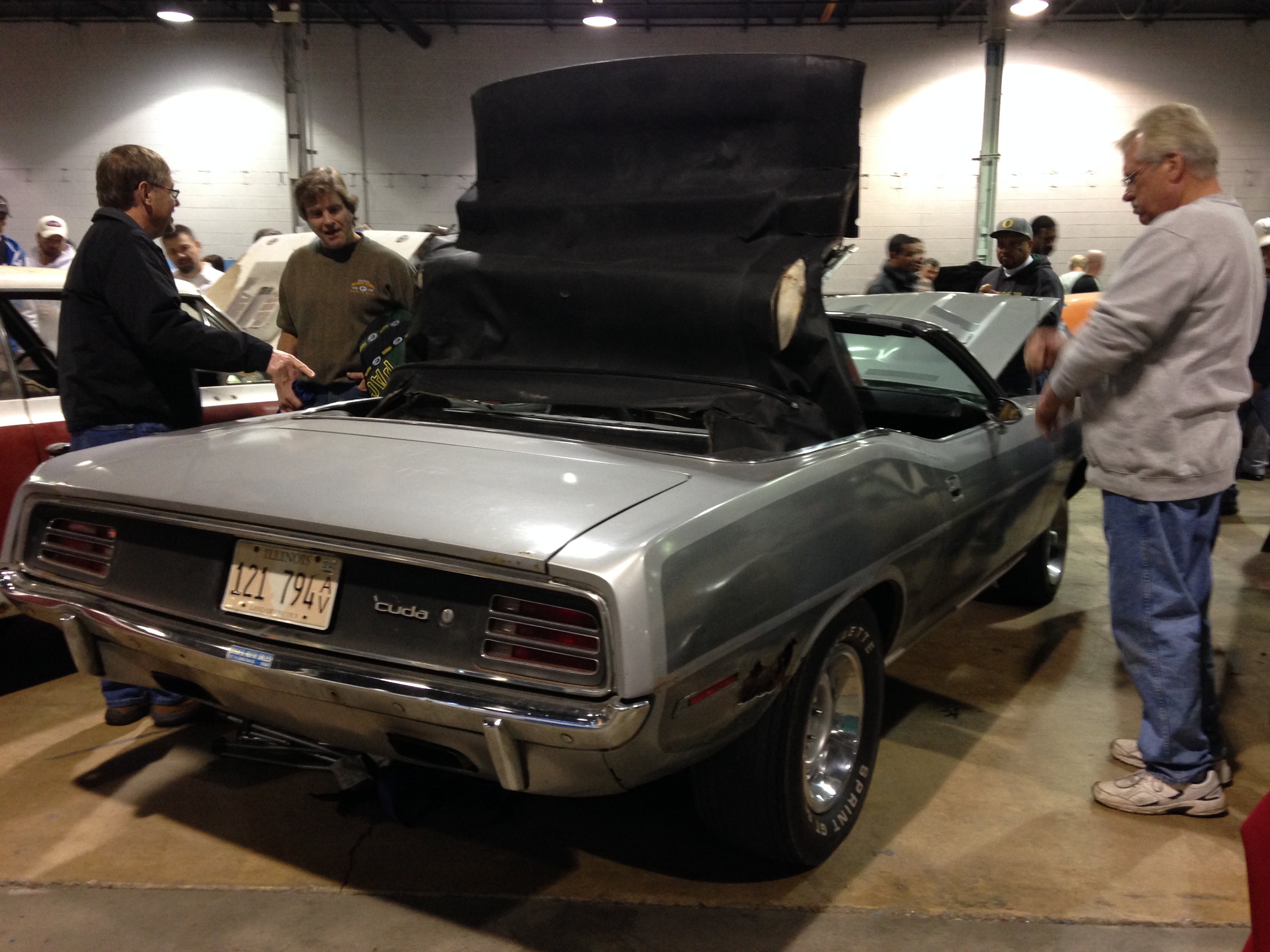 A silver barn-find Cuda – these guys seem to be really comtemplating buying this one and starting the restoration. 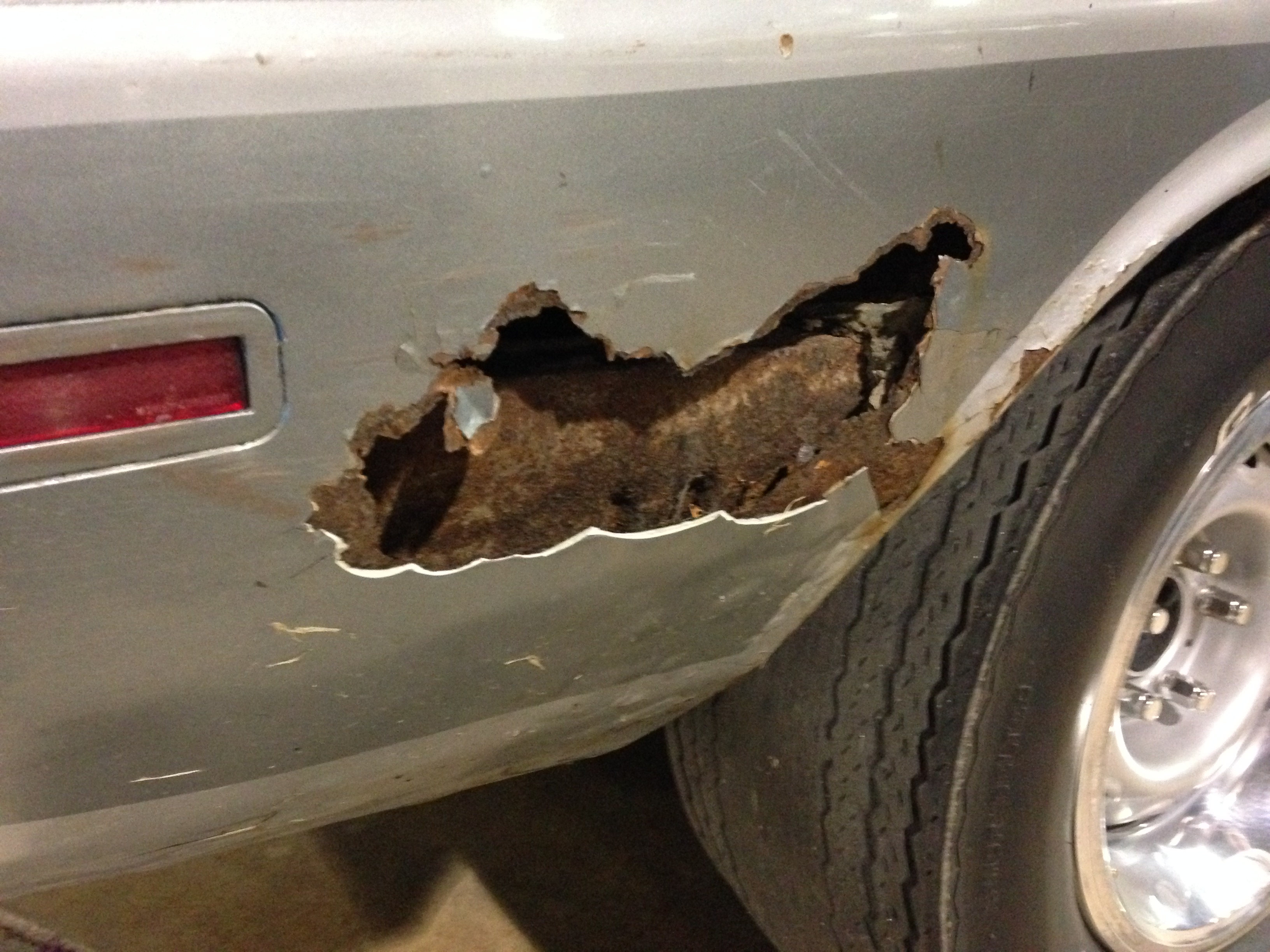 … and if they did buy it, they would certainly need a lot of fresh metal! This sooo reminds me of the car I had in High School, when you first learn how to use Bondo. 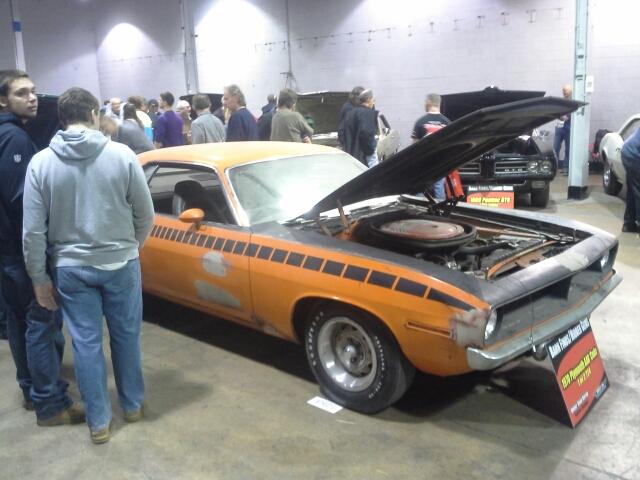 This one actually doesn’t look that bad. It will make a great start for a beautiful restoration of a high-value car for someone. 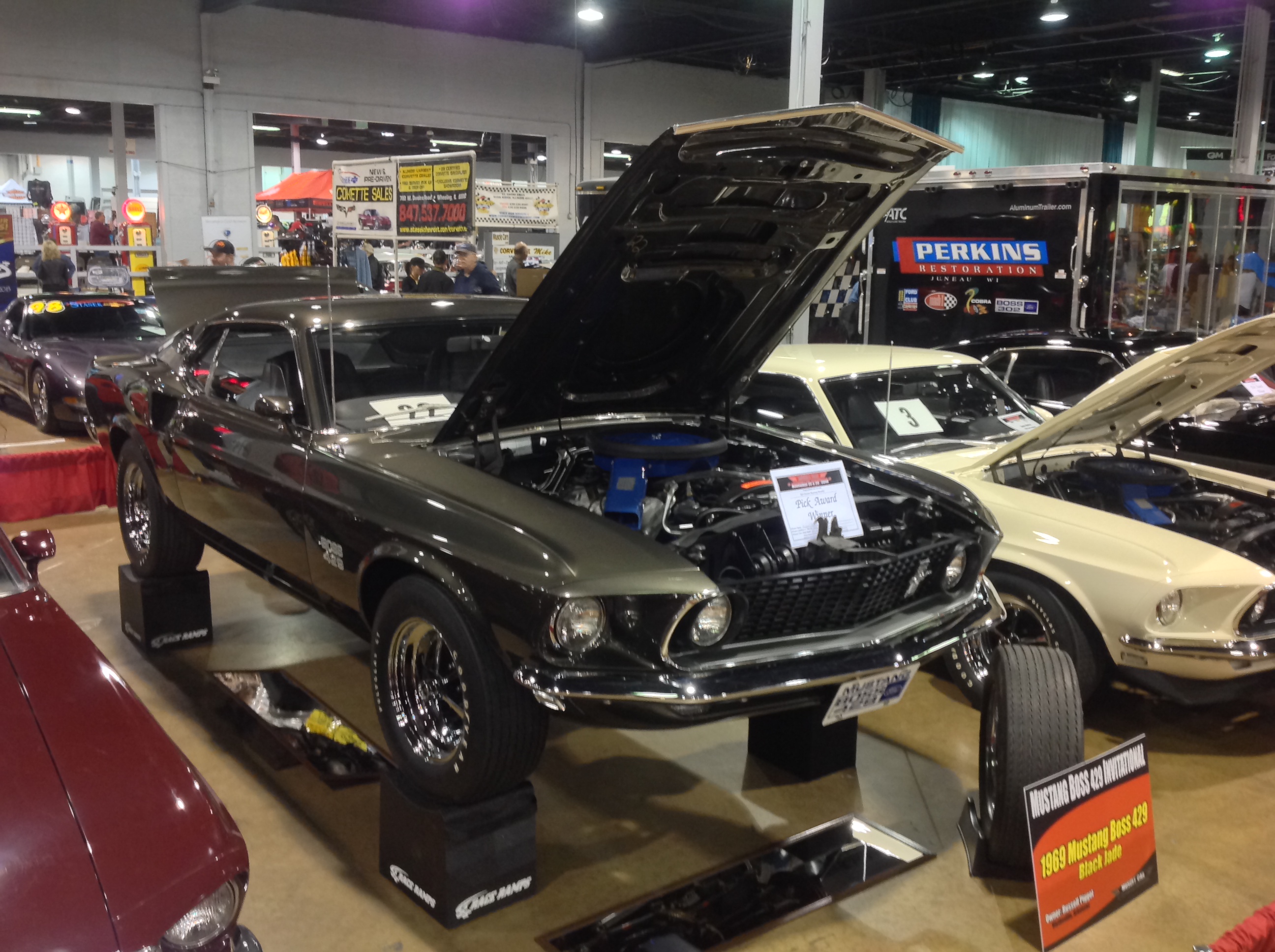 This is my favorite of the 1969 Mustang Boss 429s. The color is called Black Jade and it looked fantastic. Club member Matt and I were able to talk to the owner who came from Brisbane Austrailia for the Muscle Car National Show. 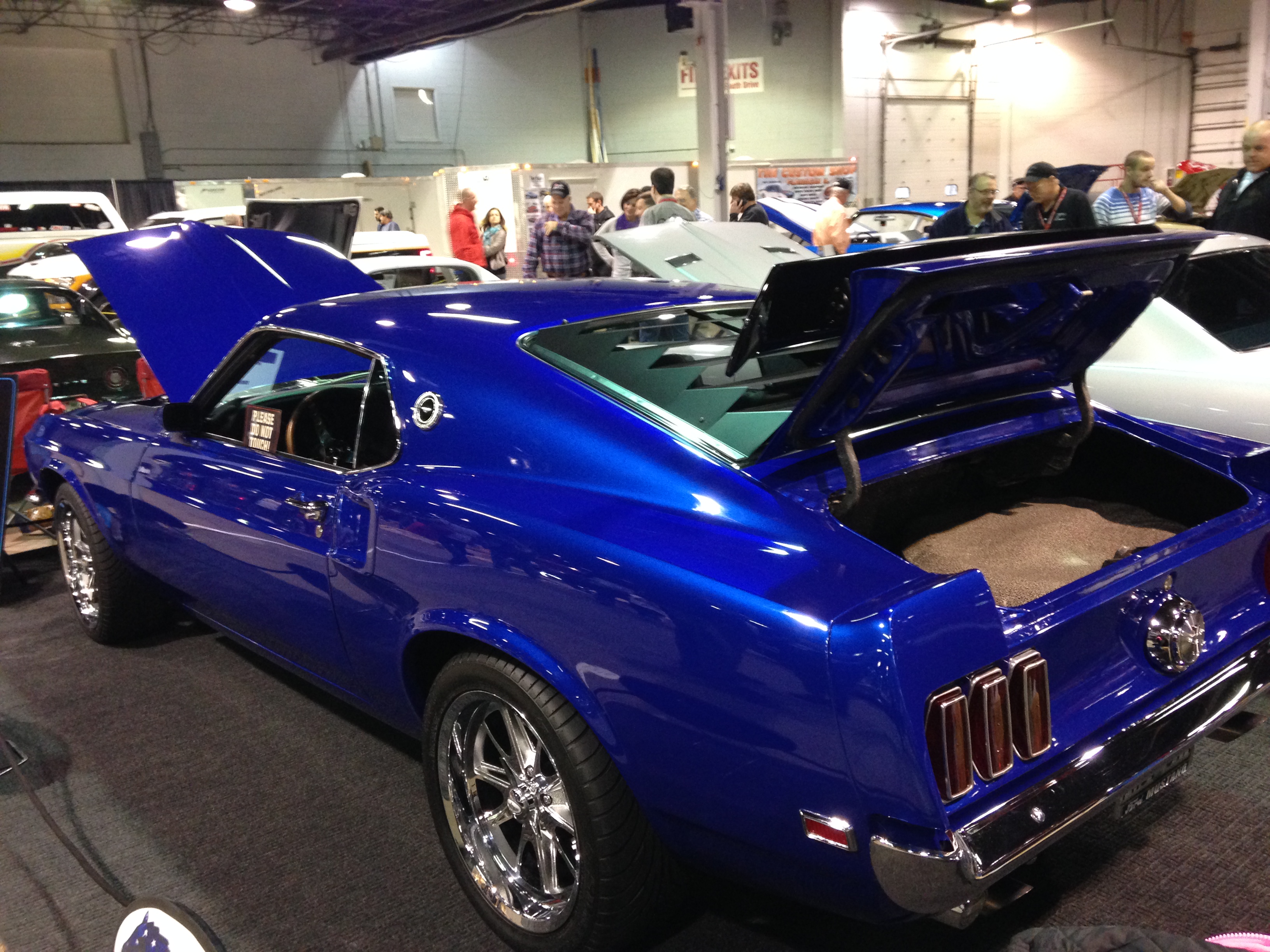 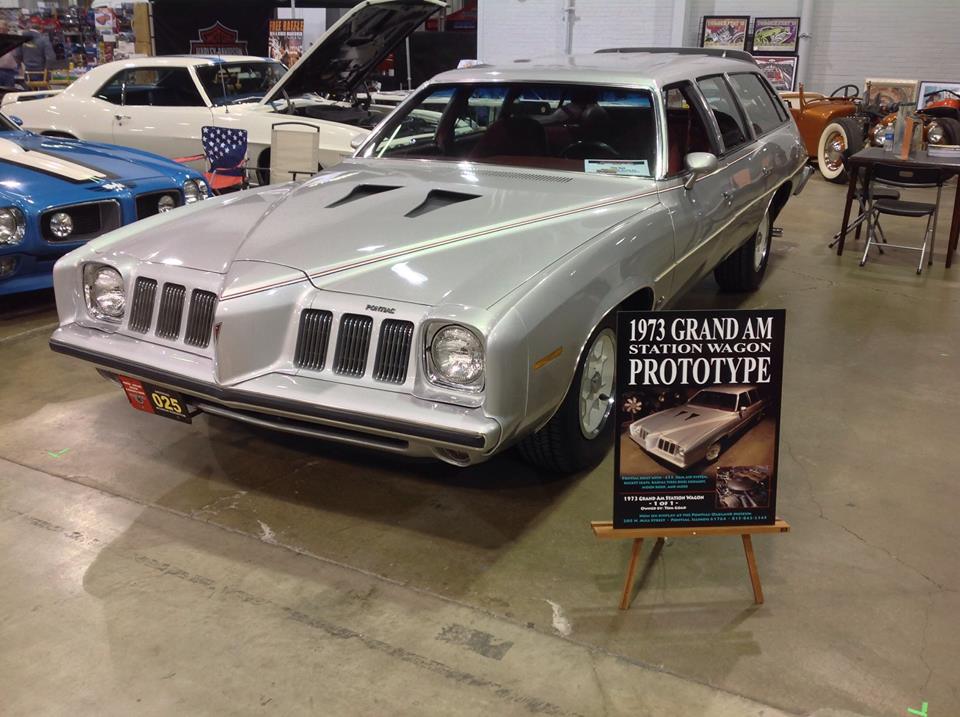 Our friend, Tim Dye from the Pontiac Oakland Auto Museum brought this one of one, 1973 Grand Am prototype with him to the show. This car has a factory sun roof, and working hood scoops bringing fresh air into the 455 powerplant. Oh and notice the two Trans Ams beside the wagon. 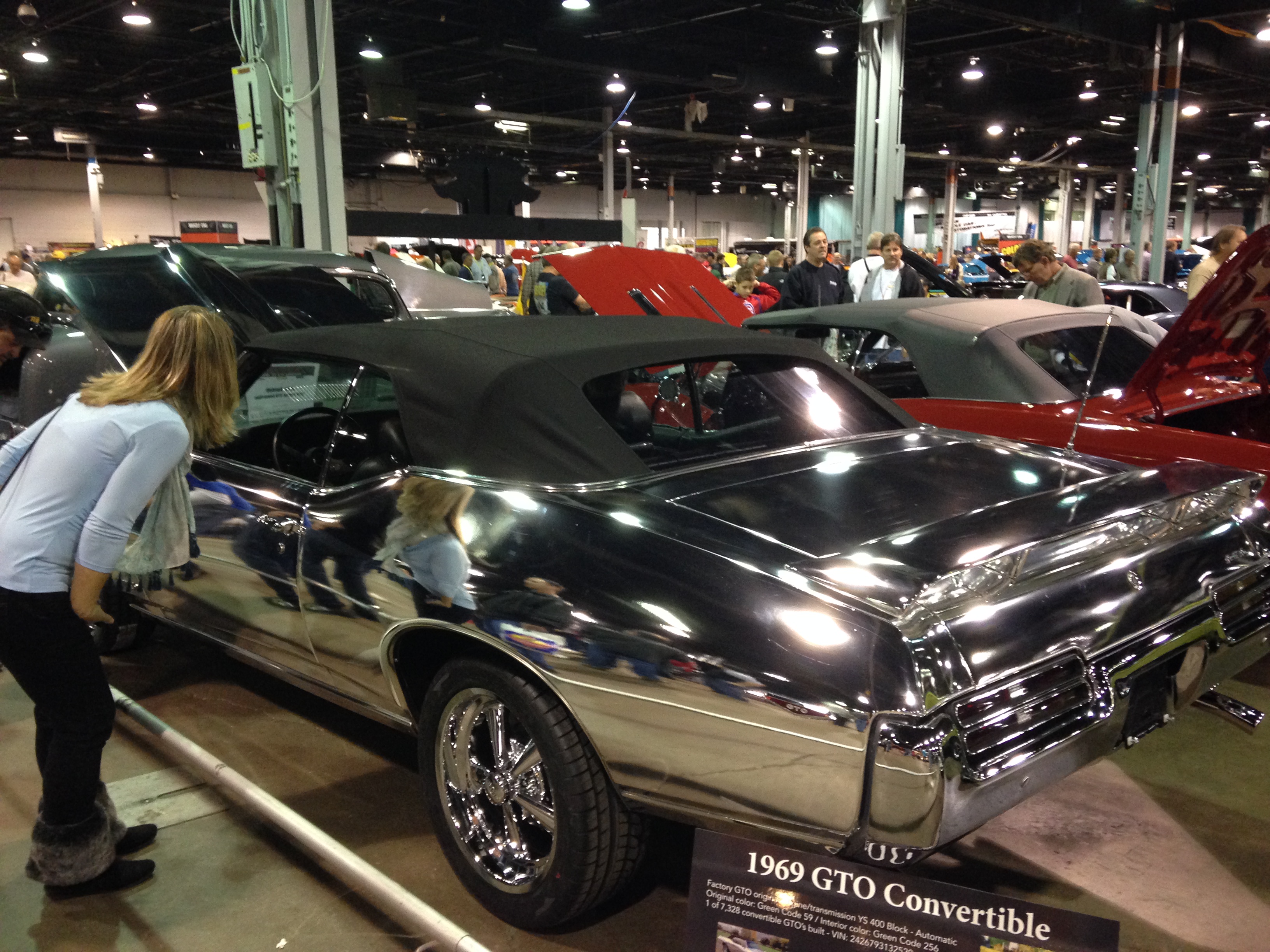 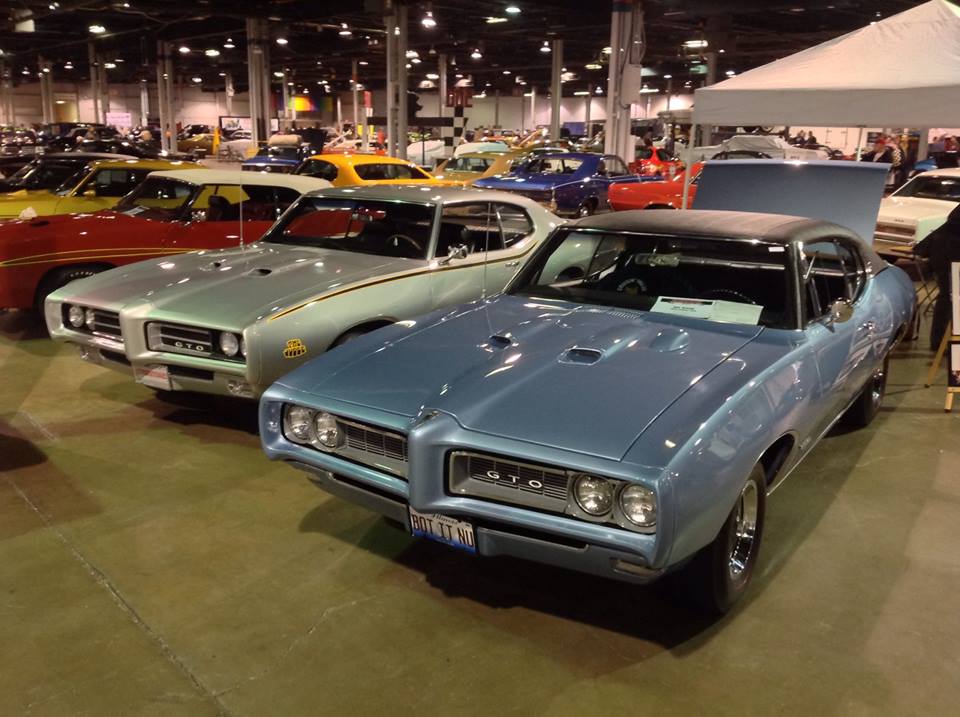 The 50th anniversary of the GTO had some stunning examples of Poncho muscle. As the plate says, this blue one is an original owner car from here in Illinois. 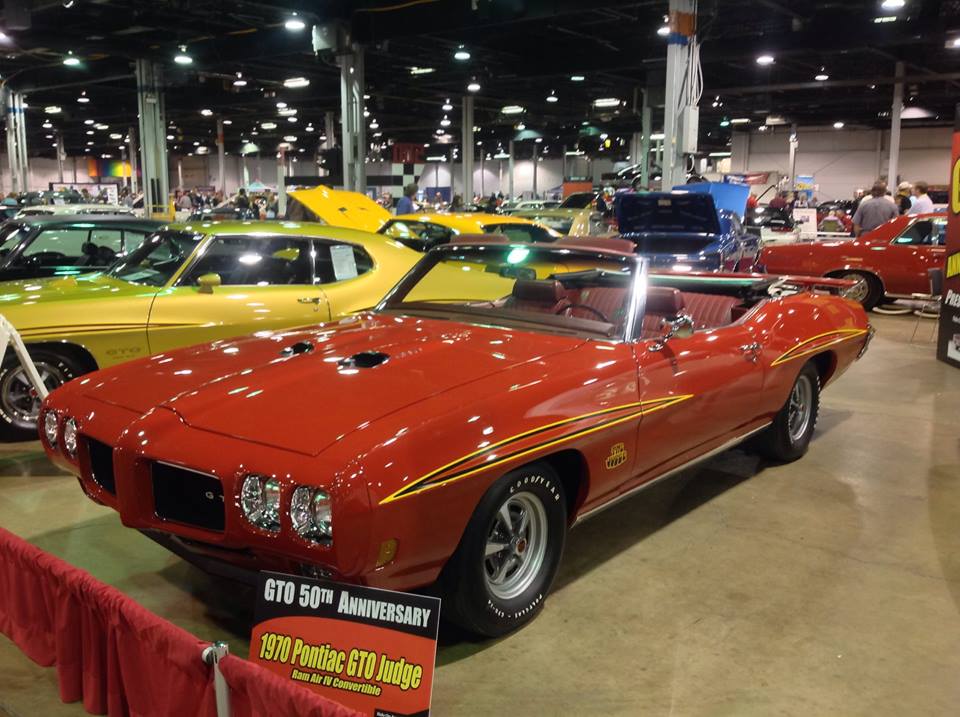 What a beautiful red 1970 Judge convertible. Notice Jim Wanger’s red 1964 GTO in the background – that’s the same one he used in all the vintage GTO advertising. 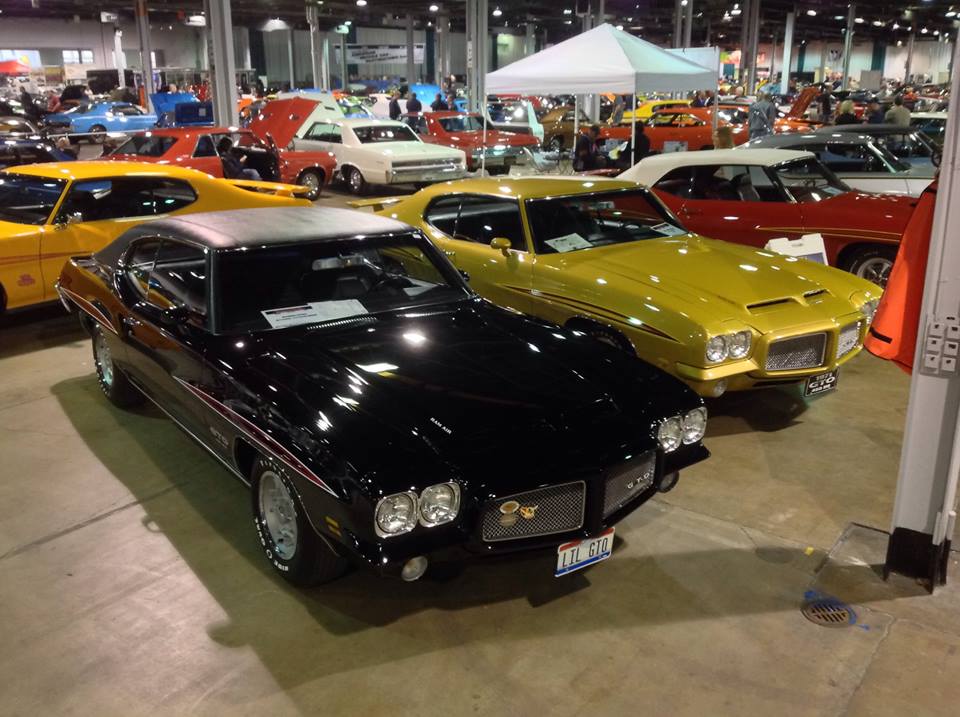 My first car was a Mopar, so they have a special place in my heart.  Whenever I see a beautiful 1970 AAR Cuda, I stand up and take notice.  The Mopar crowd was not disapointed at this show, as they also celebrated the 50th anniverisary of the famed 426 Hemi engine. 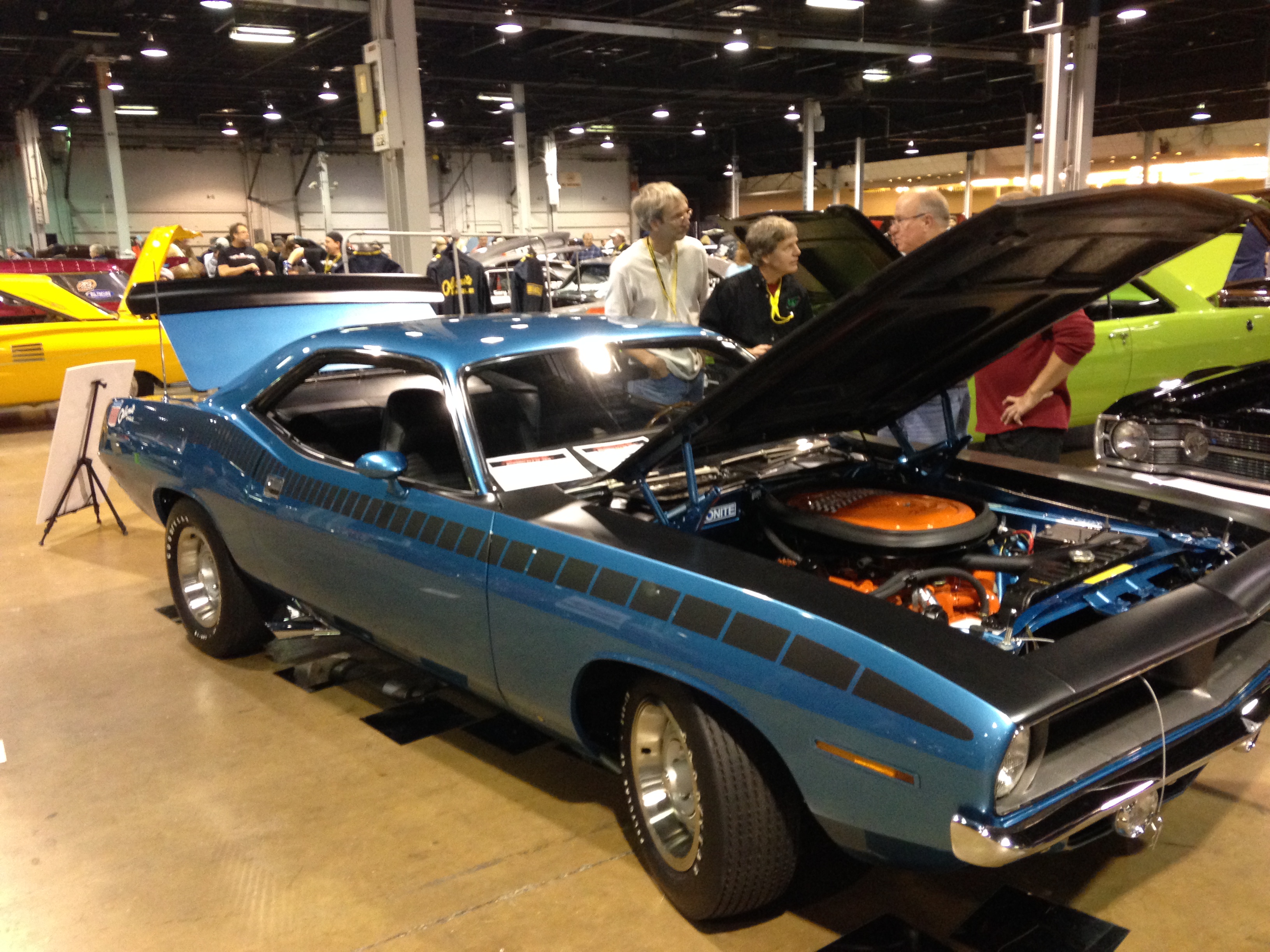 This my friends, is a 1970 AAR Cuda, in the color B5 Blue. The AAR Cuda always had the 340, 6 pack, side exhaust just before the back tire, and a fiberglass hood with a special hood scoop. It is the only Cuda with the side strobe-stripe and has the AAR racing logo at the back. This is a very desirable and sought after Muscle Car in the collector car market. 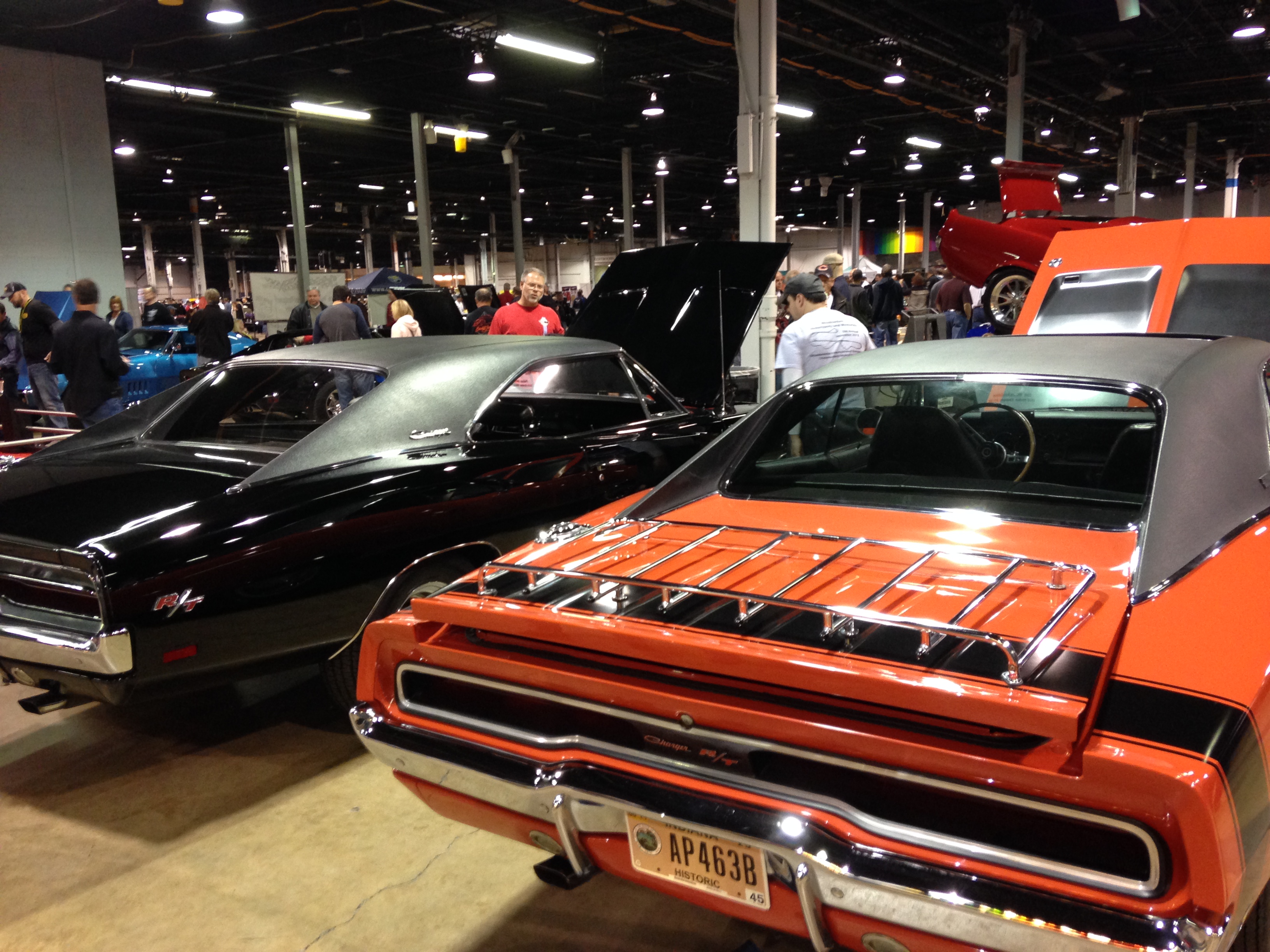 The ’68 and ’69 Dodge Charger is just a sinister looking beast, and built for speed with big-block Muscle like 440’s and 426 Hemi’s. Made famous by the likes of the Dukes of Hazard’s General Lee and Vin Diesel’s Fast and Furious ride. Check out the luggage rack on the back of the Orange one! 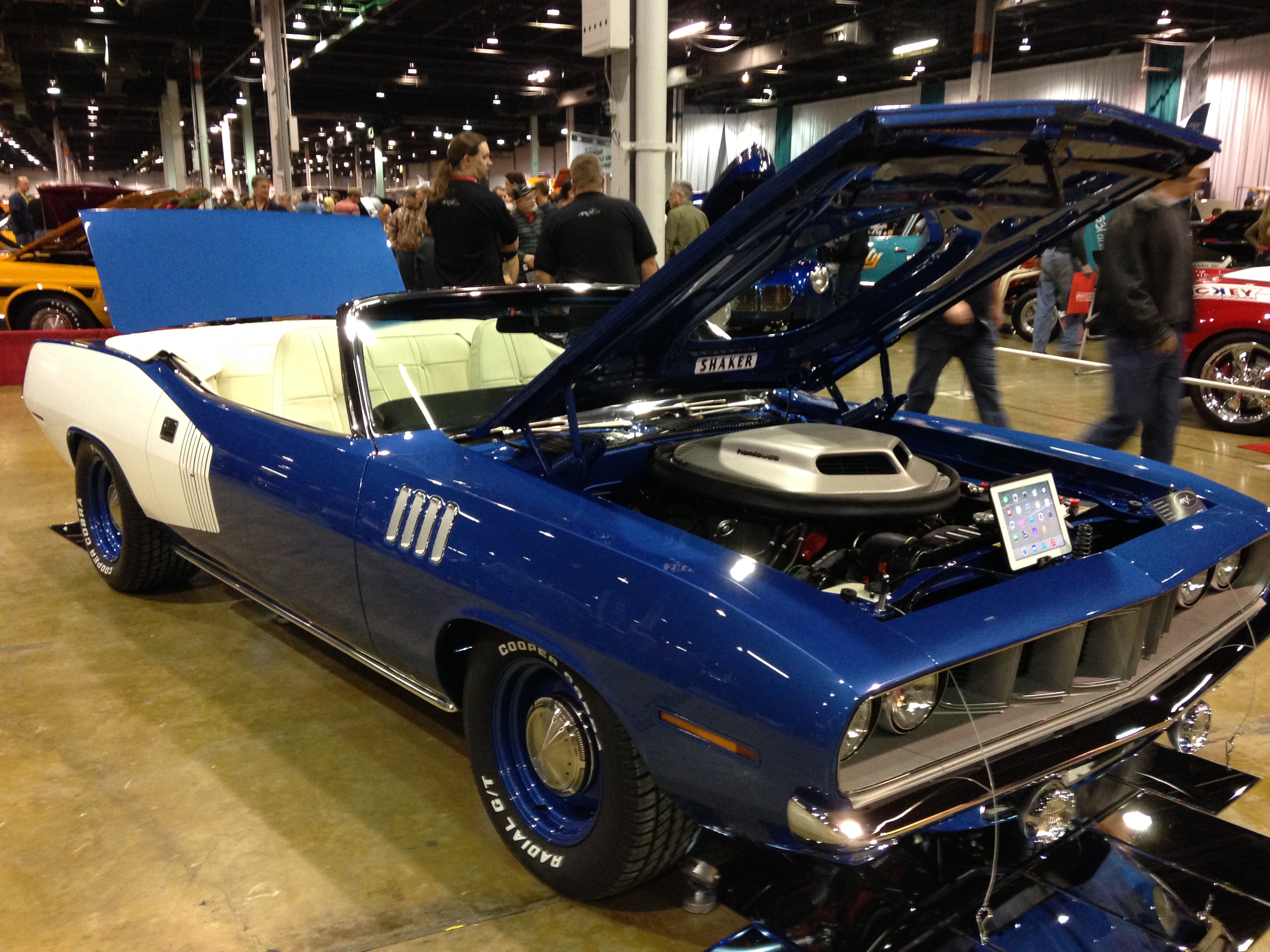 The other bad boy in the Cuda family is the Hemi with a Shaker hood. This is a 1971, which has the large Billboard at the back shouting out to the world the strength of the powerplant. Also unique to the ’71 is the side “gills” on the upper front fender. Oh, and did you notice this one is a convertible? What a great color combination too. 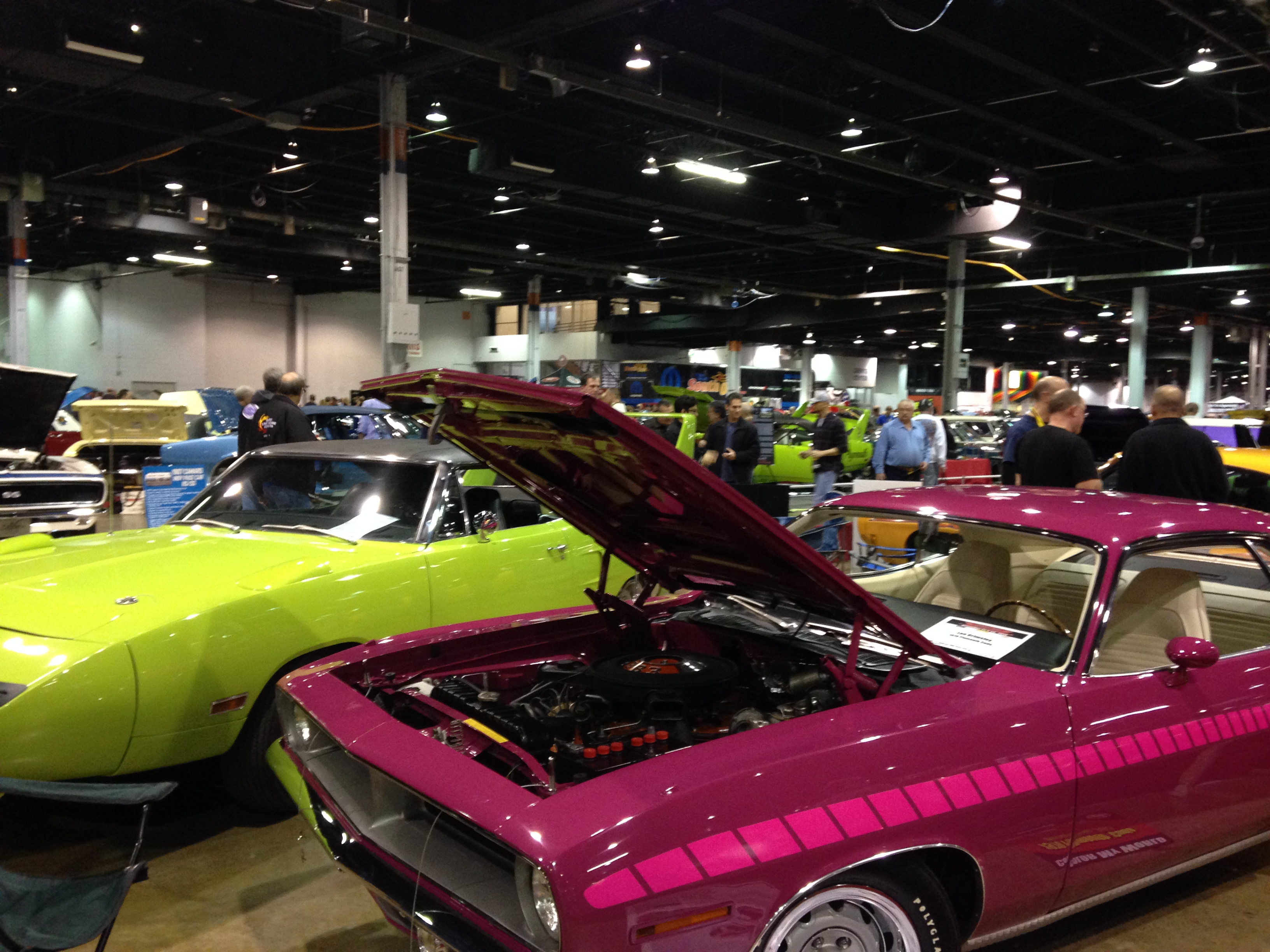 Check out the wild colors of this 1970 Plymouth duo. A Neon Yellow Plymouth Superbird and a dark Pink Panther-esque Cuda, complete with light pink AAR-style side strobe stripe.

But we’re all about the first generation Firebirds on this website, and our next story will go into detail on the cars we know and love.  Here’s a pair of ’69 Trans Ams to set the stage for our next post.  Stay tuned – you won’t want to miss it! 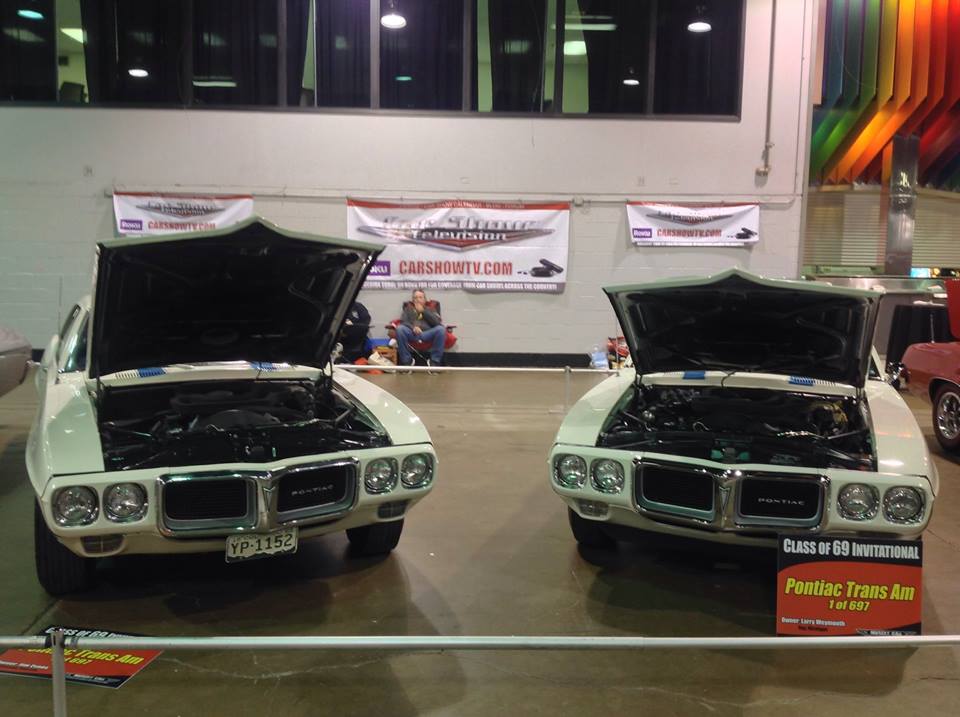 These two beauties hail from Colorado and Michigan. The one on the left is still owned by it’s original owner!