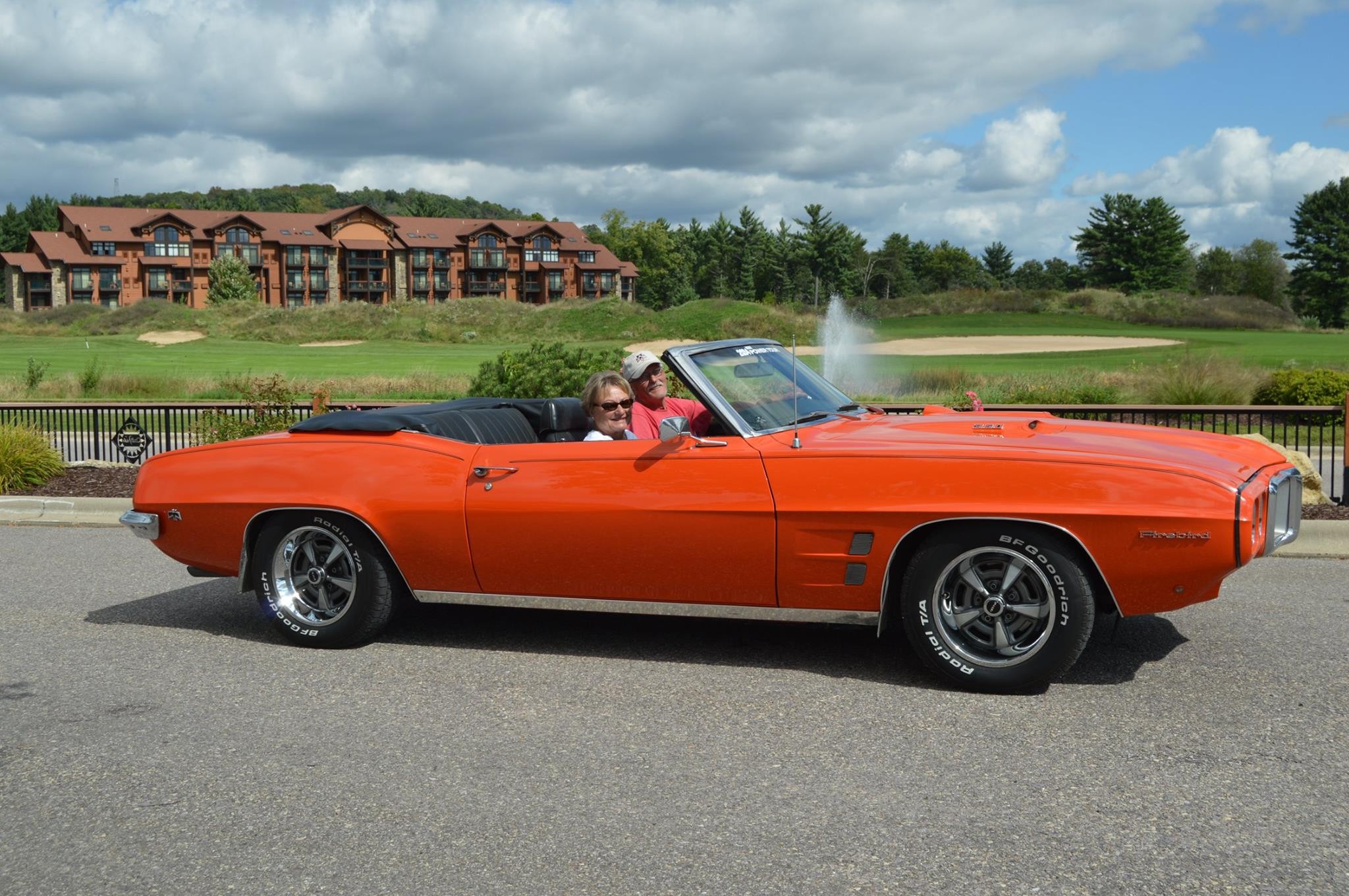 Hank Kollross and his wife Mary, have been a big part of our club since our first full season in 2014. And living in Green Bay Wisconsin, 200 miles from our headquarters, hasn’t stopped them

from taking the trip down to join us on several of our club events. From cruises to Pontiac Illinois, to drives around Lake Geneva to great shows in St. Charles and Lake Delavan, Hank & Mary always seems to be there with their beautiful 1969 Carousel Red Firebird convertible.  Like the Beach Boys song says…. I get around! 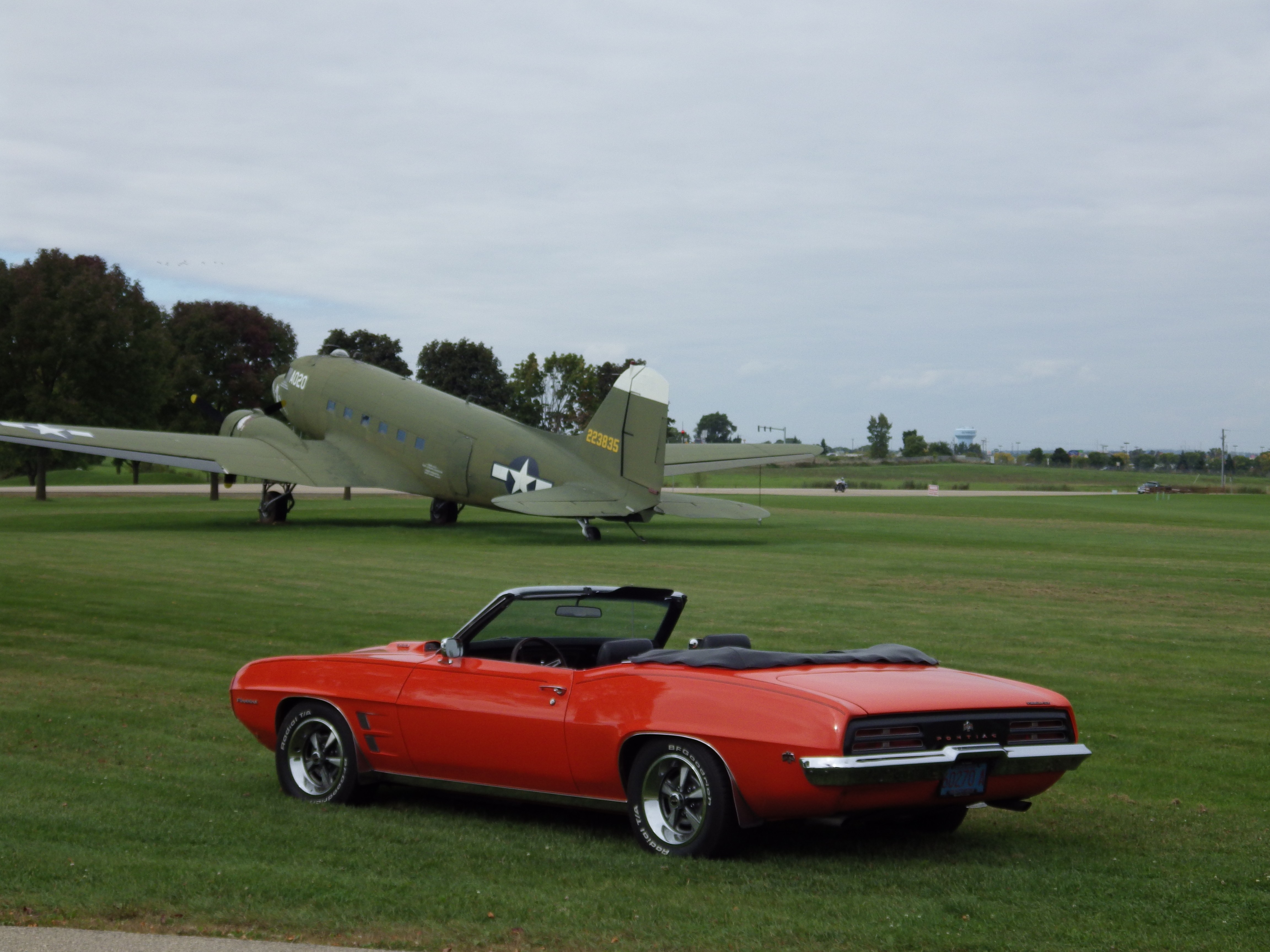 Every year Hank and his friends put out a Pontiac Calendar with great scenes like this one. 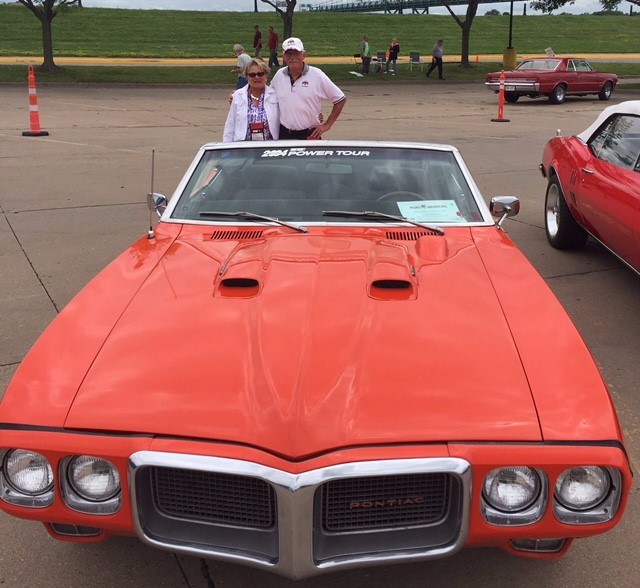 Hank and Mary with their pride and joy at this year’s POCI convention in Iowa.

But the Midwest Firebirds are not the only club they belong to, they are also members of the Topless Friends Convertible Club, that gets together for many short weekend cruises and one major event in June each year. The Open Air Classics Club, a Wisconsin state-wide convertible club, open to any year make or model convertible, that has one big 4-day event in August. And don’t forget the Pontiac Oakland International Club. Hank and Mary’s beautiful bird has been spotted frequenting POCI events around the Midwest, like driving 1,100 miles to Wichita and going to conventions in Louisville and Bettendorf. They have also driven on the Hot Rod Power Tour, and for the past three years, they have attended the Pontiac Adventures weekend in the Wisconsin Dells. Whew, that’s one busy Firebird couple!

Hank’s love for GM “F” bodies all started with a 1970 split-bumper Camaro. At the time he found his ’69 Firebird, he was actually looking for a first gen Camaro, but couldn’t find one that suited his taste. I asked Hank to tell us more about the history of his bird and the changes it has gone through to make it the frequent flyer it is today. 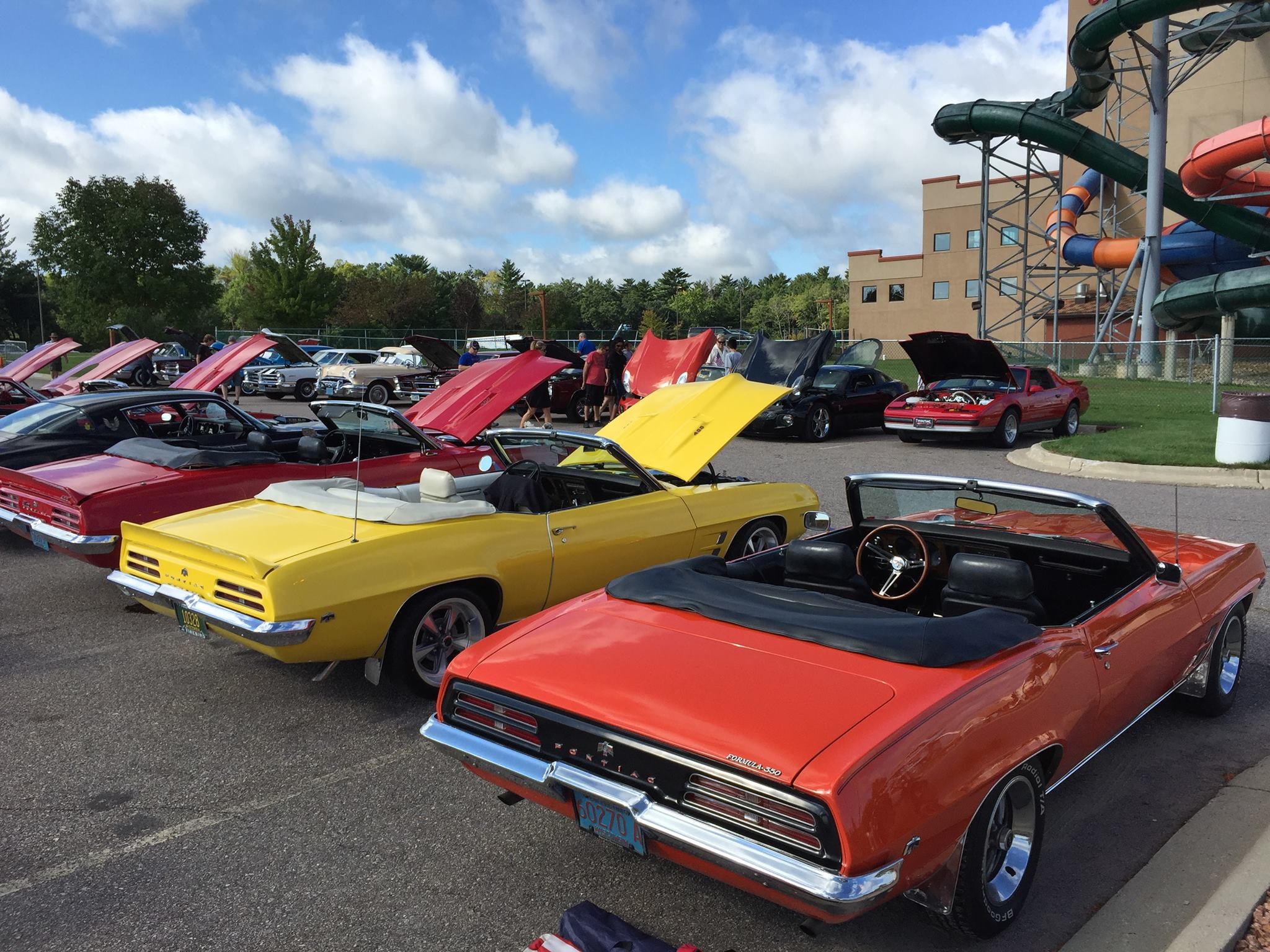 Three Little Birds…. at the Pontiac Adventures in the Wisconsin Dells.

“I bought this Firebird in 1990, in Green Bay and it was a good solid car. In 2001, I had the body stripped down to bare metal, and replaced a few of the panels – it is about 90% original. The gentleman I purchased it from was 70 years old at the time, and he had owned it for 17 years and put on less than 2,000 miles over that period.

I think it was driven hard the first 4 years from clues I have found. Probably why the engine was changed sometime in those years. The car was originally sold at Pirwitz Buick/Pontiac in Schofield Wisconsin near Wausau in the central part of the state. I have tried to locate the original owner, but with no luck.” 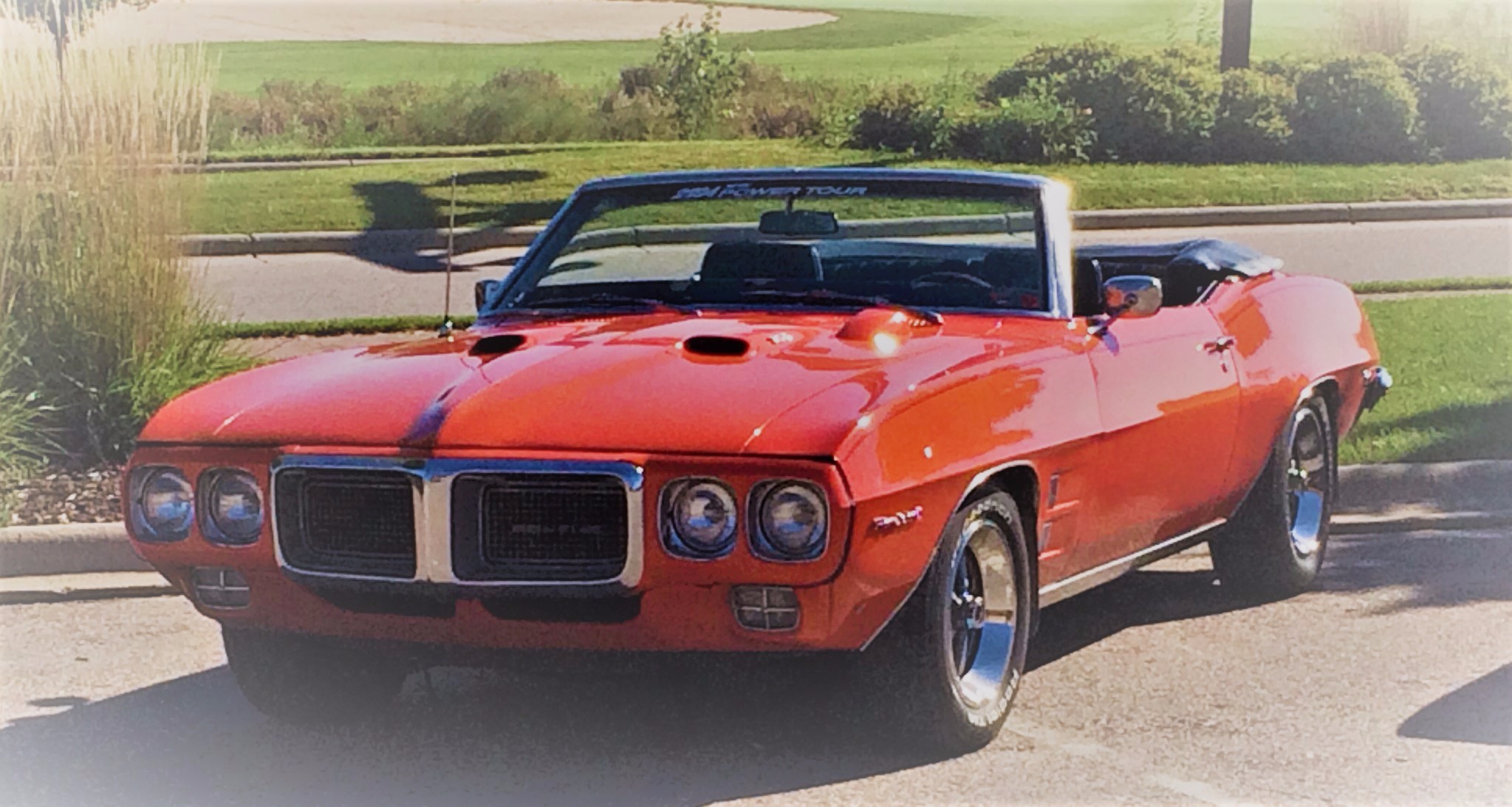 Fof fun in the sun, nothing beats a convertible Firebird on a nice summer day.

“The Firebird had 45,000 miles on it when I bought it, the odometer now shows 106,000 which should be fairly accurate, and tells you just how much we love to drive it! Original options on the car were: 350 2bbl, 350 auto trans, dual exhaust, 2.56 rear with posi, deluxe interior with column shift, AM radio, power top, Rally II wheels and trunk light. Carousel Red was considered a special order color in 1969 with a $12.00 extra charge.

At the indoor arena in Wichita Kansas at the POCI national convention in 2014. 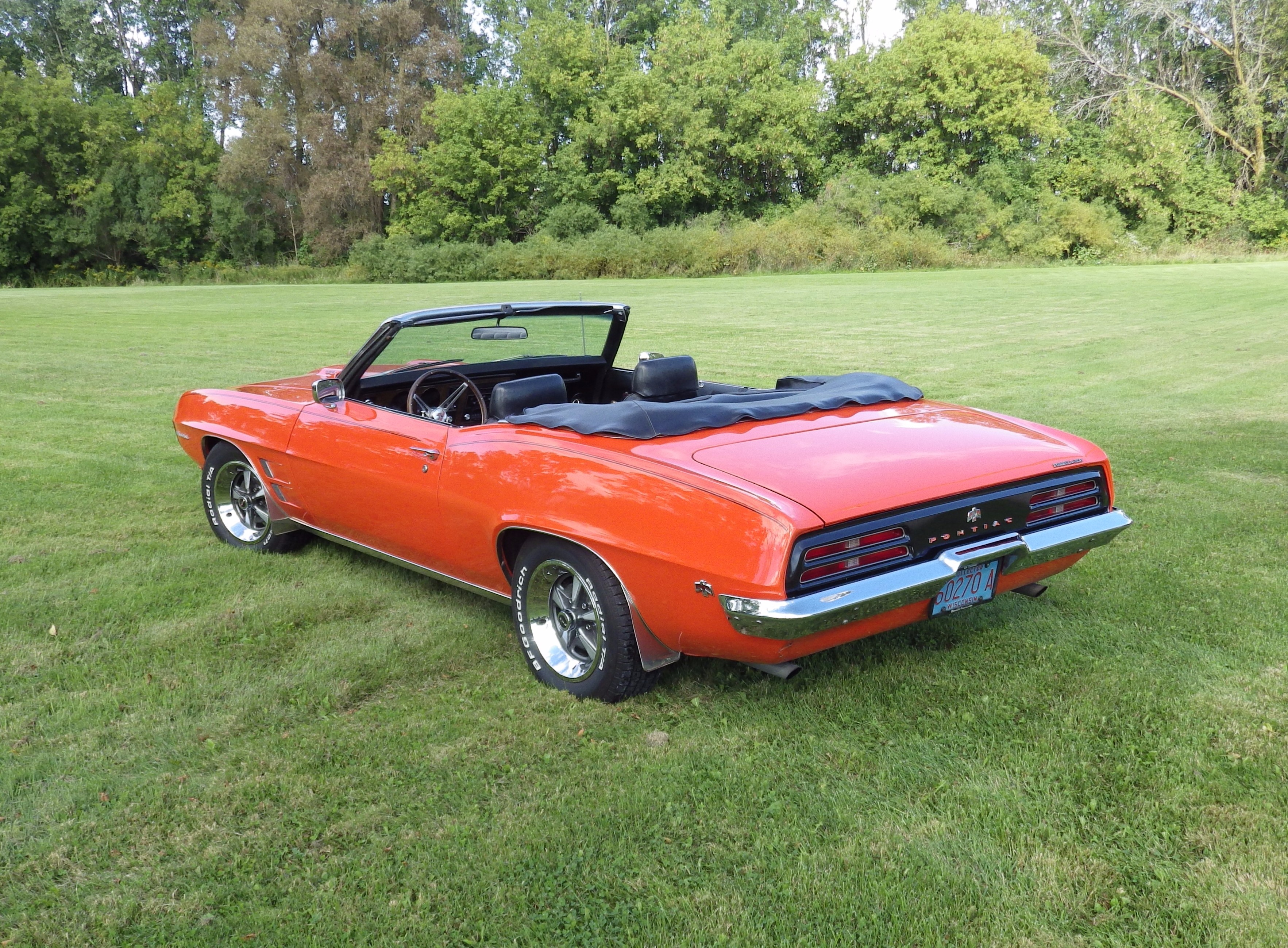 Over the past 26 years Hank has had time to make a lot of changes to his Firebird and his plan for this winter season is no exception – He plans to pull the speedometer and have it re-calibrated, as the odometer recently quit working. Here’s a short list of some other changes he has made to the car. In 1998 the original transmission needed to be rebuilt, so Hank first changed it to a 4-speed manual. But then improved it a few years later to a T5 5-speed manual transmission out of a ’88 Firebird GTA.

It was originally a 2:56 rear end, then he changed it to a 2:78 ratio, and finally settling on a 3:08 gear from a 1981 WS-6 Trans Am, which included a Nodular rear end, and disk brakes. Hank cautioned on doing this, as there was a lot of custom work involved in making it fit. He also swapped out the original shift steering column, for a nicer tilt unit. He refinished the aftermarket Grant wood wheel by plugging the rivet holes for a more “factory” look and added a first gen “bird” on the horn cap. 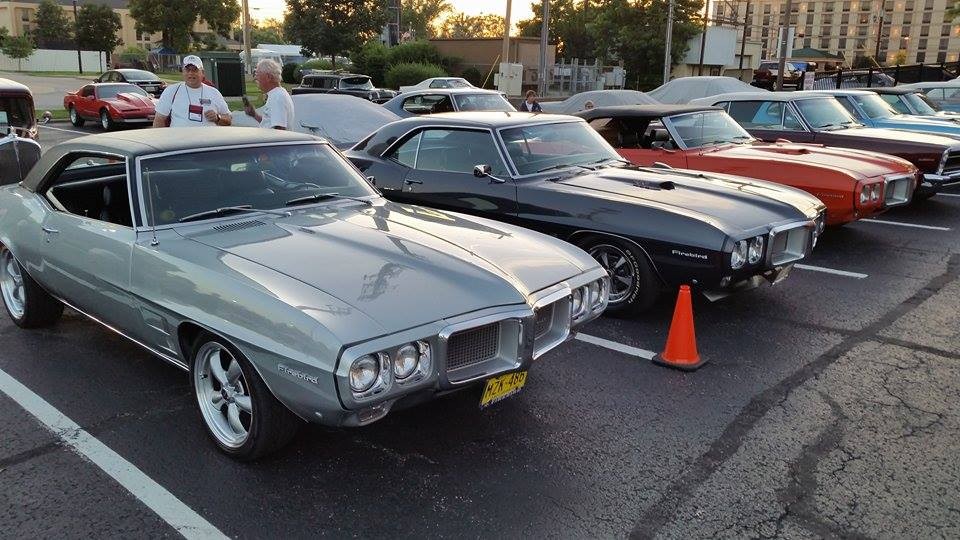 In 2015, Hank and Mary drove down to the POCI National Convention in Louisville Kentucky. Sent in by our Facebook friend, Bradley Adams.

It came with a correct YE code ‘69 block, but it was not the original engine. In 2004 he had the 350 engine rebuilt and bored 30 over, and put in hardened valve seats, and changed it to a factory correct, four barrel Pontiac Rochester quadrajet carb. He also put in the rally gauge cluster. Found a working clock and switched it over to quartz movement, after it stopped working. 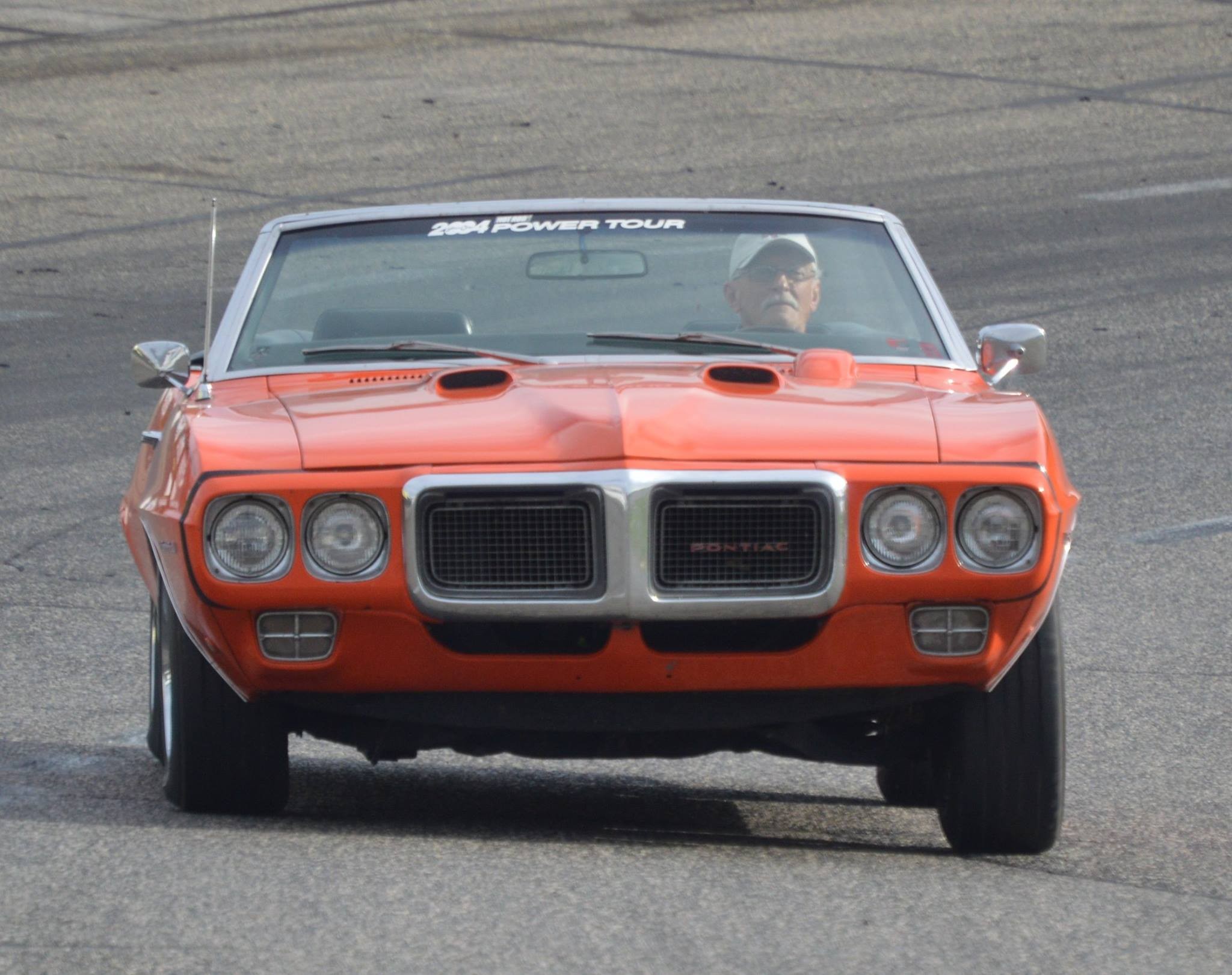 I love the aggressive cornering on the track – part of the cool experience in the Dells.

One of their favorite events is the well-organized, Pontiac Adventures weekend in September. This is a multi-day all-Pontiac car and scenic tour event through the winding hills around the Wisconsin Dells. Hank says, “You just can’t beat the beauty of the area.” It starts on Thursday with the whole weekend filled with fun things to do. There are cruises all day on Friday, with one of the stops being Dells Motor Speedway, for hot laps. “They do this very safely, allowing just one car at a time on the track. You can drive all-out, going for a competitive time, or just enjoy the loop with a spirited cruise. They also have a police-sanctioned burn-out area. That really is a lot of fun and a highlight of the weekend, with some guys bringing extra tires just for this event – but I have to say the best part is the people that come out for the weekend.” 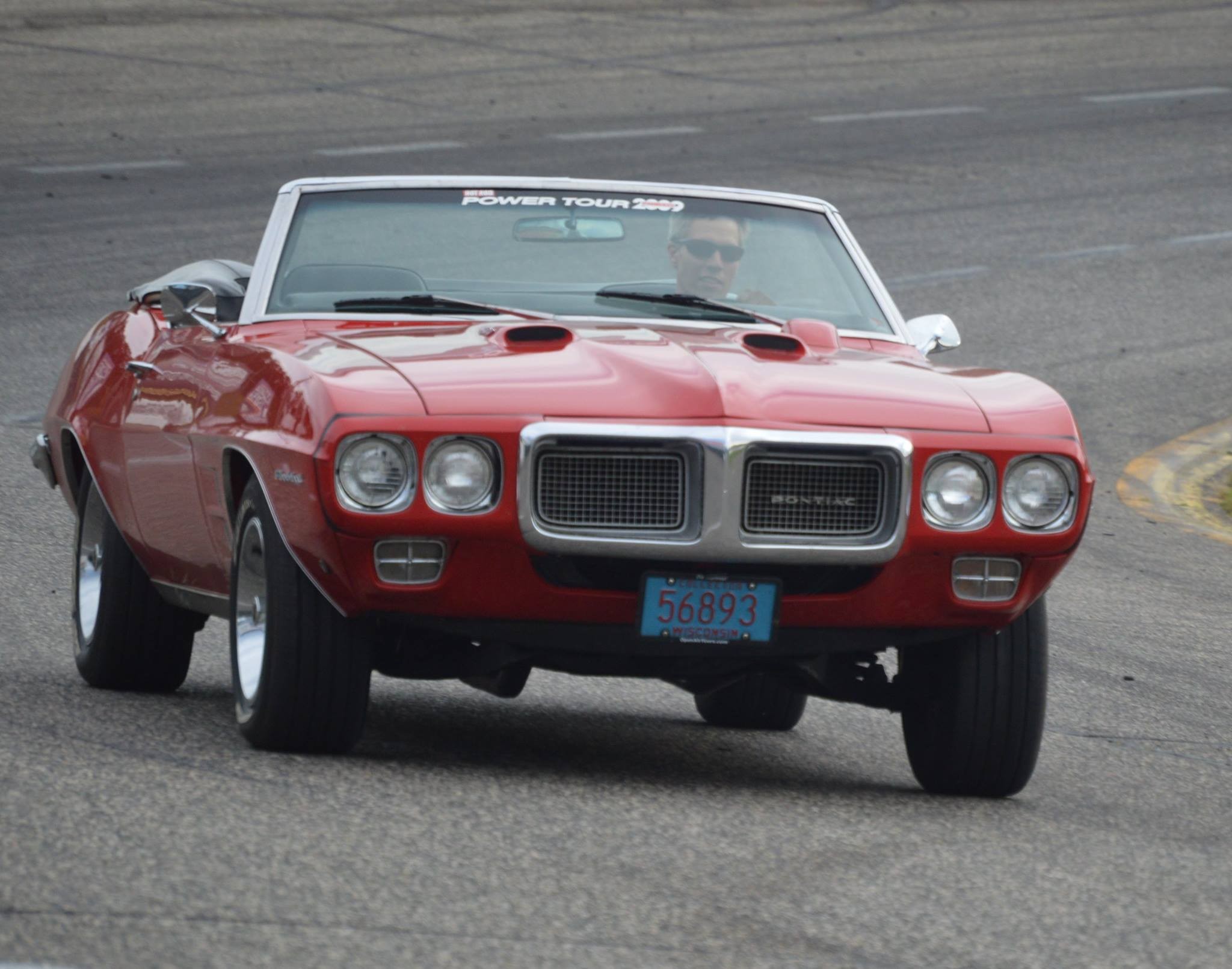 Midwest Firebird member, Tony Wiegert joined Hank and Josh at the Pontiac Adventures event. Tony told me this is just a wonderful event, and he would like to see more of our club members joining them next year. 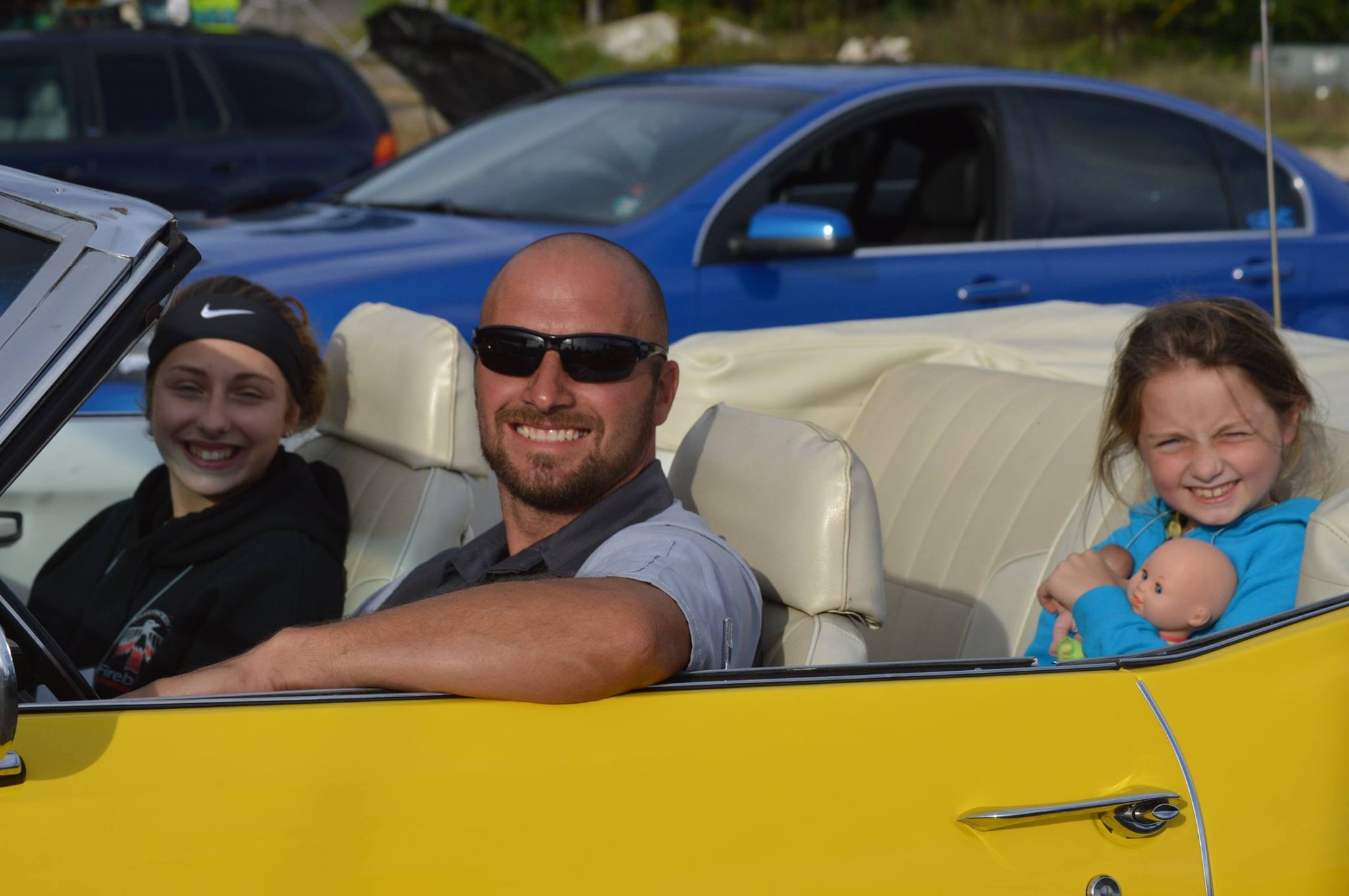 The Green Bay Firebird family connection! Seen here with his two daughters, Midwest Firebird’s member Josh Haen is Hank’s nephew, and couldn’t let Hank have the only ’69 Firebird convertible in the family. 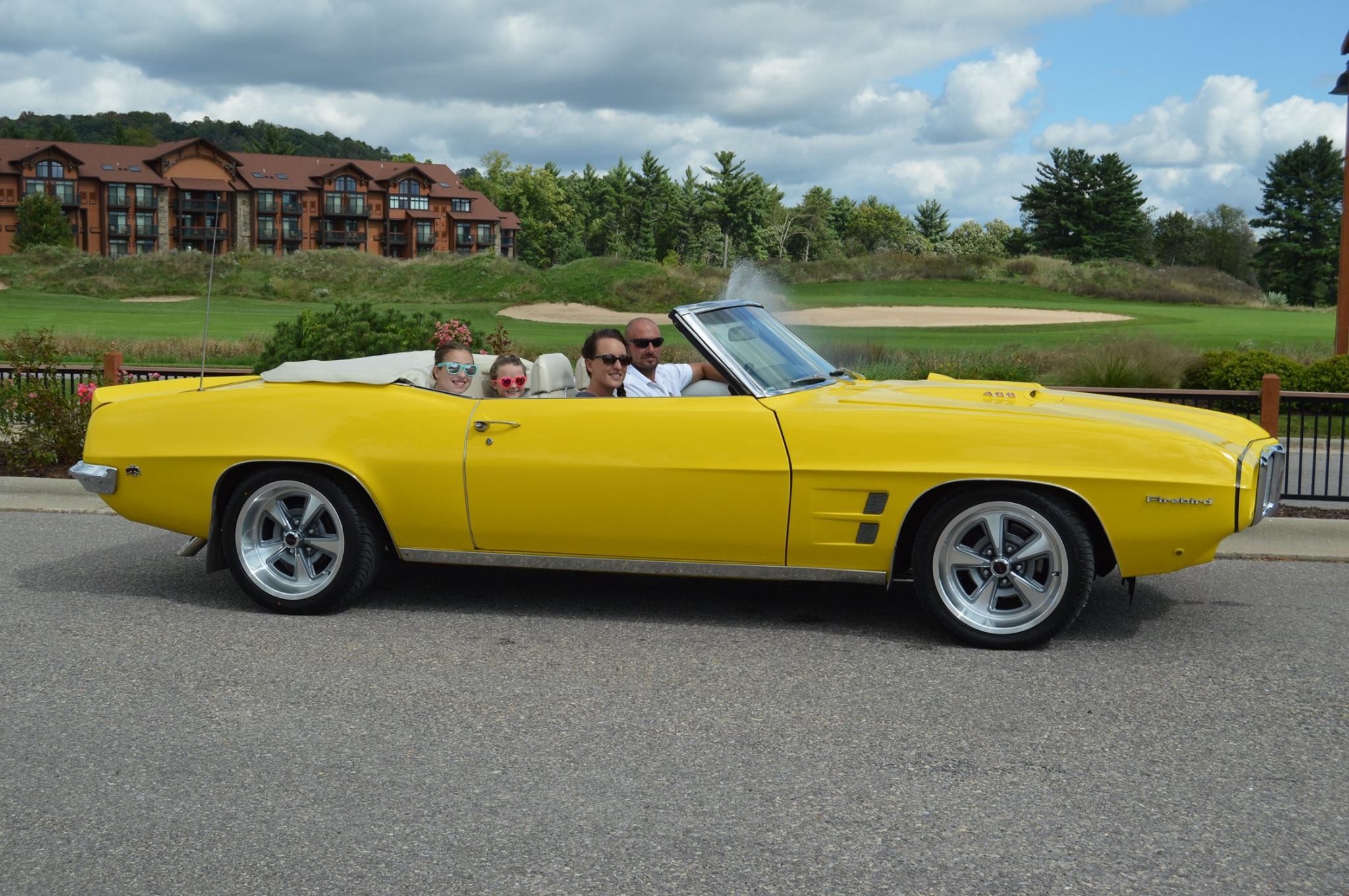 As the cars return to the hotel Friday afternoon, they have a fun Tailgate Party in the Chula Vista parking lot, to get everybody together & check out all the cars. Saturday morning is the Show and Shine. A judged car show until 11 am then the first tour takes off around 11:30 to take a 50 to 100 mile tour through the rolling countryside. Another tour on Saturday is called the Spirited Tour, it is a little faster paced, leaving early and making stops at a winery and cheese factory. Then drive a little more and stop for lunch then back at 3 pm to stop and admire the cars. Finally, the event ends on Sunday morning with awards, a brunch, and off for home. 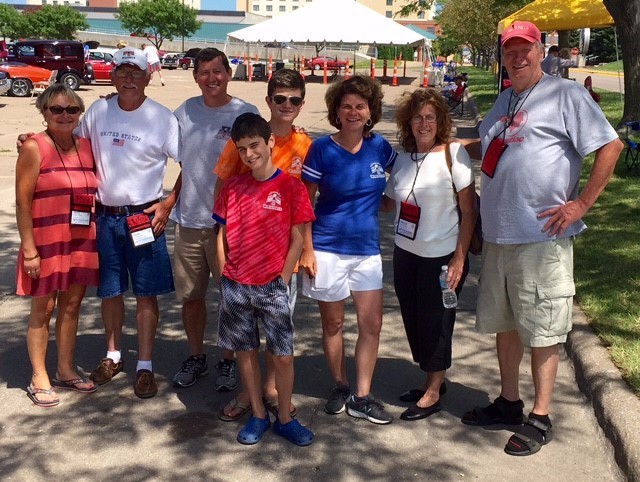 The best part of our hobby! Hank and Mary with my family and Dave and Mary Jo Sullivan at the POCI national convention in Bettendorf Iowa this year.

When asked what Hank likes most about the hobby and Pontiacs in general, he said: “It’s the quality of the people that we’ve met over the years. We are proud to say we have car friends all over, from the Midwest to Texas to Canada and Australia.”