Midwest Firebird’s member, Scott had the enviable opportunity to be at the Mecum Muscle Car Auction in Kissimmee Florida yesterday. While everyone here in the Midwest was trudging through the snow and enduring the bitter, single-digit temperatures, Scott was enjoying the Florida sunshine while basking in the glow of vintage muscle and especially first generation firebirds.  This auction is Mecum’s 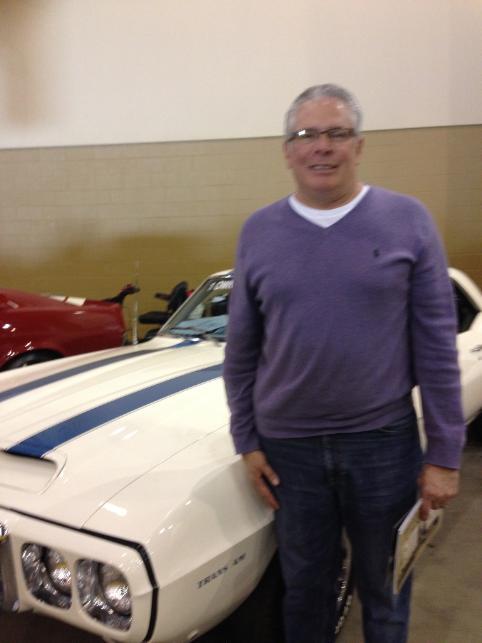 largest event, encompassing 10 days and including over 3000 cars.  There was something for everyone here. The gamut ran from Ferraris to six cylinder Ramblers.

What Scott found interesting was there were dozens of first generation Camaros at the auction. “Everything from six-cylinder three speeds to pristine Z/28’s were available.  But far fewer first-generation Firebirds.”  However, there were a handful of  beautiful 1967-69 Firebirds we would like to report on.  Some sold this week, while others…  well as they say at Mecum, “the bid goes on!”

“As I reviewed all the First Gen Firebirds at this weeks auction, here are two of my personal favorites at the show”  said club President, Ken “a 1967 Sprint-6, white and red 3-speed car, and a beautiful recreation of a 69 Trans Am. But I like them for two different reasons, I like the Sprint car for its rarity, and the TA for its affordability.” Unfortunately, neither sold while on the block, someone will undoubtedly be able to snag one of these beauties for their garage over the next few days.

$20,000 was the high bin on this beautiful 1967 Sprint-6. Lot G219.  Scott said “This is one of the rarest Firebirds I have ever seen.  I’ve never seen one equipped like this, and I doubt I will ever see another one.  I have never known anyone in the 47 year existence of that car who owns a Sprint Firebird. This is a very rare bird!” 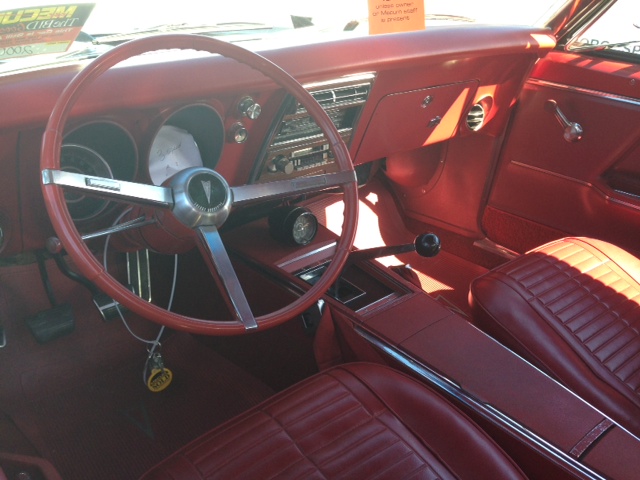 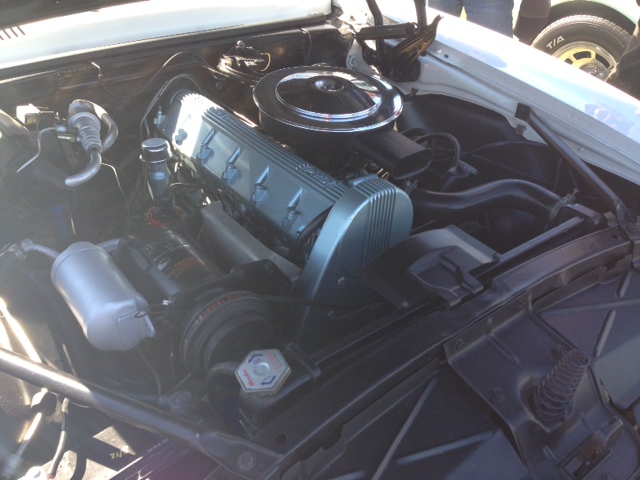 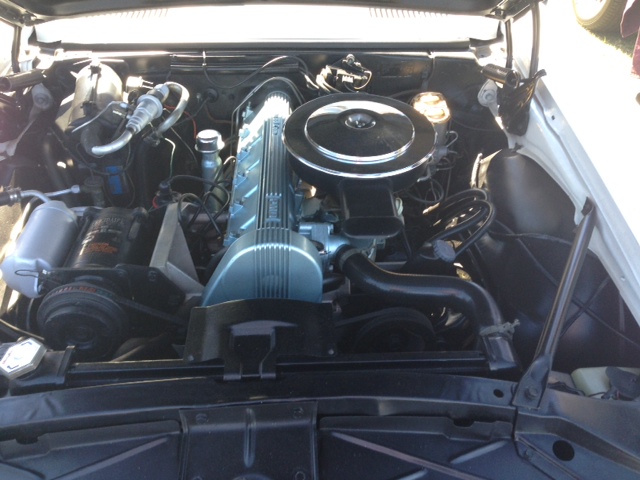 Here is the 215 hp, in-line six cylinder, overhead cam with a 4 barrel Rochester carb from the Sprint-6. This 4-speed car has factory air, and surprisingly, is an unrestored car with only one repaint.  (Note the air deflectors just forward of the radiator used only on 400 Firebirds and those equipped with factory air.)

The custom seats are the only tip-off that this is a 69 Trans Am recreation, a beautiful cruiser without the astronomical price! Lot L170. 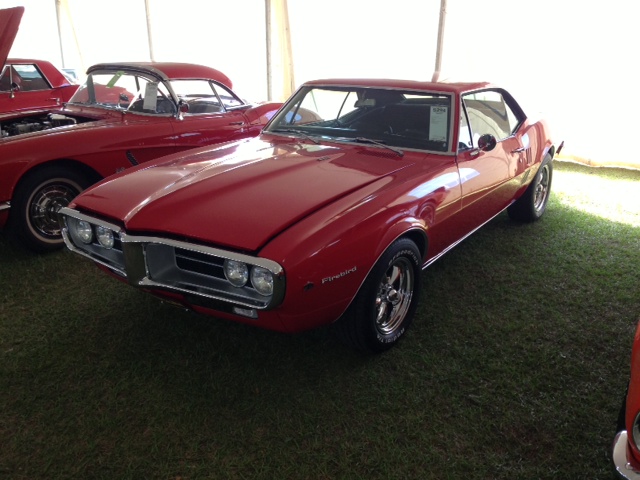 This beautiful, 1967 Regiment Red 326 coupe was a prestine restoration, but failed to sell.  The high bid was $19,000. Lot G59.  Scott said this car really stuck out in his mind because of the automatic on the column, and a bench seat. “You don’t see that every day.”

Here are some of the first gen Firebirds that did sell, and if this is an indication of where the market is going, it’s looking up! 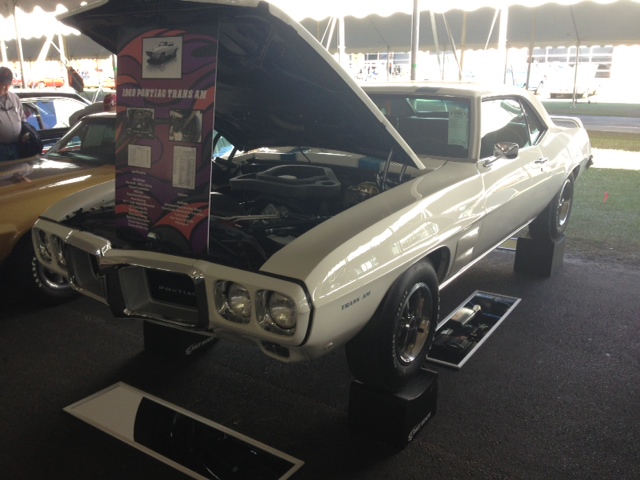 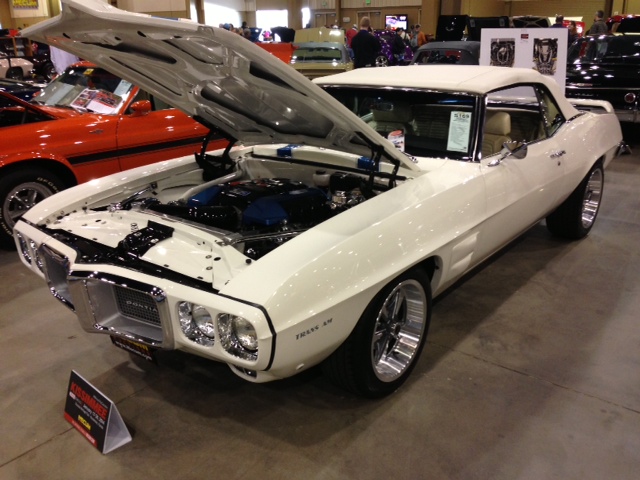 Finally, you say you really want a convertible 1969 Trans Am, but you don’t have $1,000,000 to invest in one of the original 8 that were made?  Here’s a great solution, with even more horsepower!  This is one of the top featured Firebirds which will be offered on Saturday – a ’69 Trans Am Convertible replica, resto mod. It features an aluminum LS3 Corvette/Camaro engine, with a Tremec 5-speed on 17’ custom wheels. It has a stock look, but the suspension and rigidity of the car was improved to provide unbelievable performance. The estimate on this car is between $130,000 to $150,000. Lot S169.

To sum up his experience at the Mecum show, Scott said:  “As I looked at these cars, I thought about the striking difference between Camaros and Firebirds. My perception is that the Firebirds have superior engineering and design versus their corporate competitor.  The overhead cam six was an engineering marvel. Conversely, the Camaro six-cylinder offering is the same six cylinder two barrel carburetor configuration they used since the 1950s.”

He continues, “The Trans Ams and the Z28’s were appealing to the same segment of the market. The Trans Am has functional hood scoops and side heat extractors.  They also came standard with power steering and power brakes, which made for a more comfortable driving experience.  If you want to buy a first-generation Firebird, they’re obviously more difficult to find just based on overall production numbers. So, just like at the Mecum auction, when you find that Firebird, chances are it will be very special versus its competitors, and it’s highly unlikely that you’ll see another car like yours at a car show.”

Unless stated, all lot images courtesy of Mecum Auctions.