The Dallas Area Pontiac Association (DAPA for short) boasts over 100 members, and is most likely the largest independent Pontiac club in the country.  On the last weekend in September they put on what has got to be the neatest venue for a Pontiac show anywhere in the country,  at the Cavanaugh Flight Museum in conjunction with the museum’s own Fall Fly Days event.  The Cavanaugh Museum also offers rides in some of their vintage war birds!  So if your feeling the need for speed “Top-Gun style”, the ride of you life in a vintage P-51 Mustang will only set you back about a cool two thousand dollars!  On Saturday they hold the Pontiac only car show, then Sunday is their American Pride show where all American cars and bikes are exhibited.  If car racing is your thing, on Sunday they provide the opportunity to participate in the Texas Muscle Car Club Challenge race at North Star Dragway in Denton. 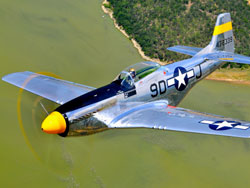 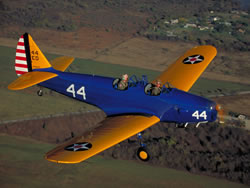 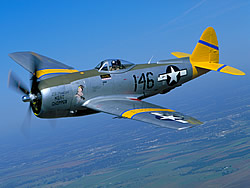 Where else can you see vintage Pontiacs alongside even older War Birds that fought in battles all over the world during world war’s one and two?  I personally have a love for the World War II Fighters and Bombers like the P-51 Mustang, F4U Corsair and P-47 Thunderbolt, as well as the B-17 Flying Fortress, B-25 Mitchell and B-29 Superfortress bombers.  For guys like me this show is a can’t miss with cool first gen Firebirds and great War Birds!

Our friend, Tim Dye of the Pontiac Oakland Automobile Museum was at this show as a guest speaker.  He was also kind enough to send us pictures and share the stories on some of the fantastic Texas ‘birds that were at the show – both fighting birds and Firebirds. 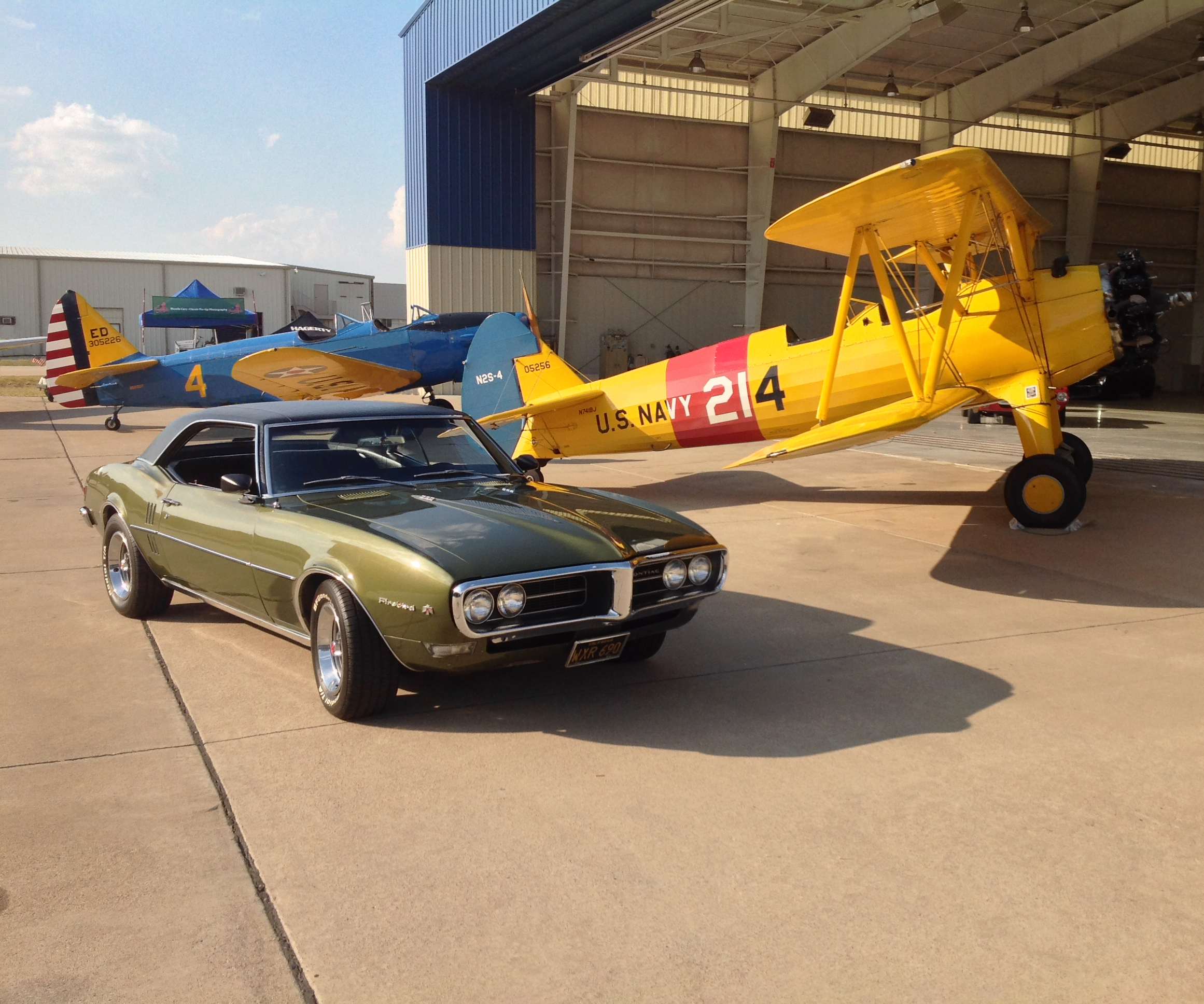 Tim captured this beautiful ’68 Verdoro Green 350 coupe with a Fairchild and Stearman Trainer sitting outside their hangers. 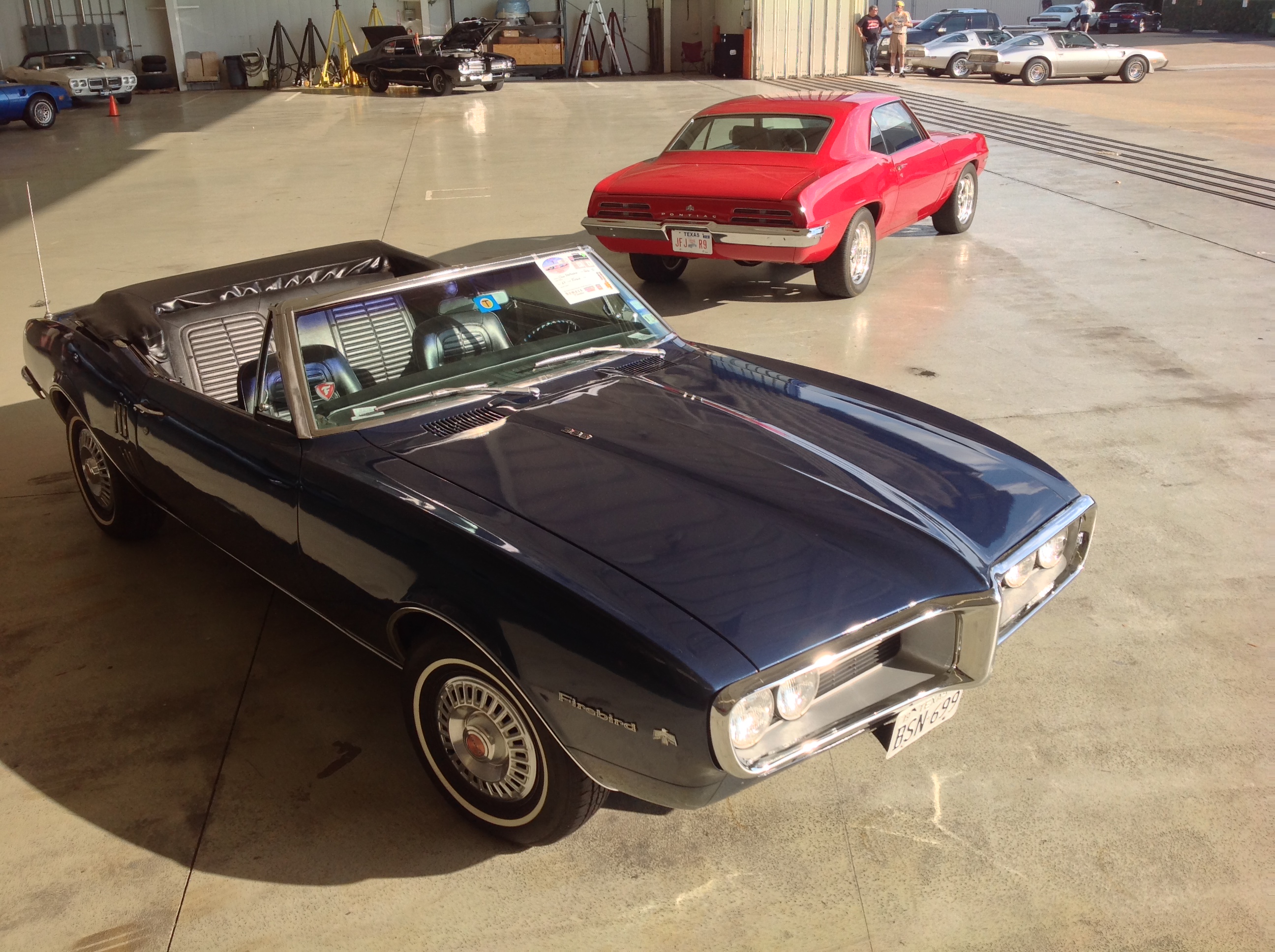 Two beautiful first gen birds with more ‘birds and GTO’s in the background. Tim took advantage of a ladder in the hanger to get this shot. The car in the forground is a ’68 Aegean Blue 400 convertible. 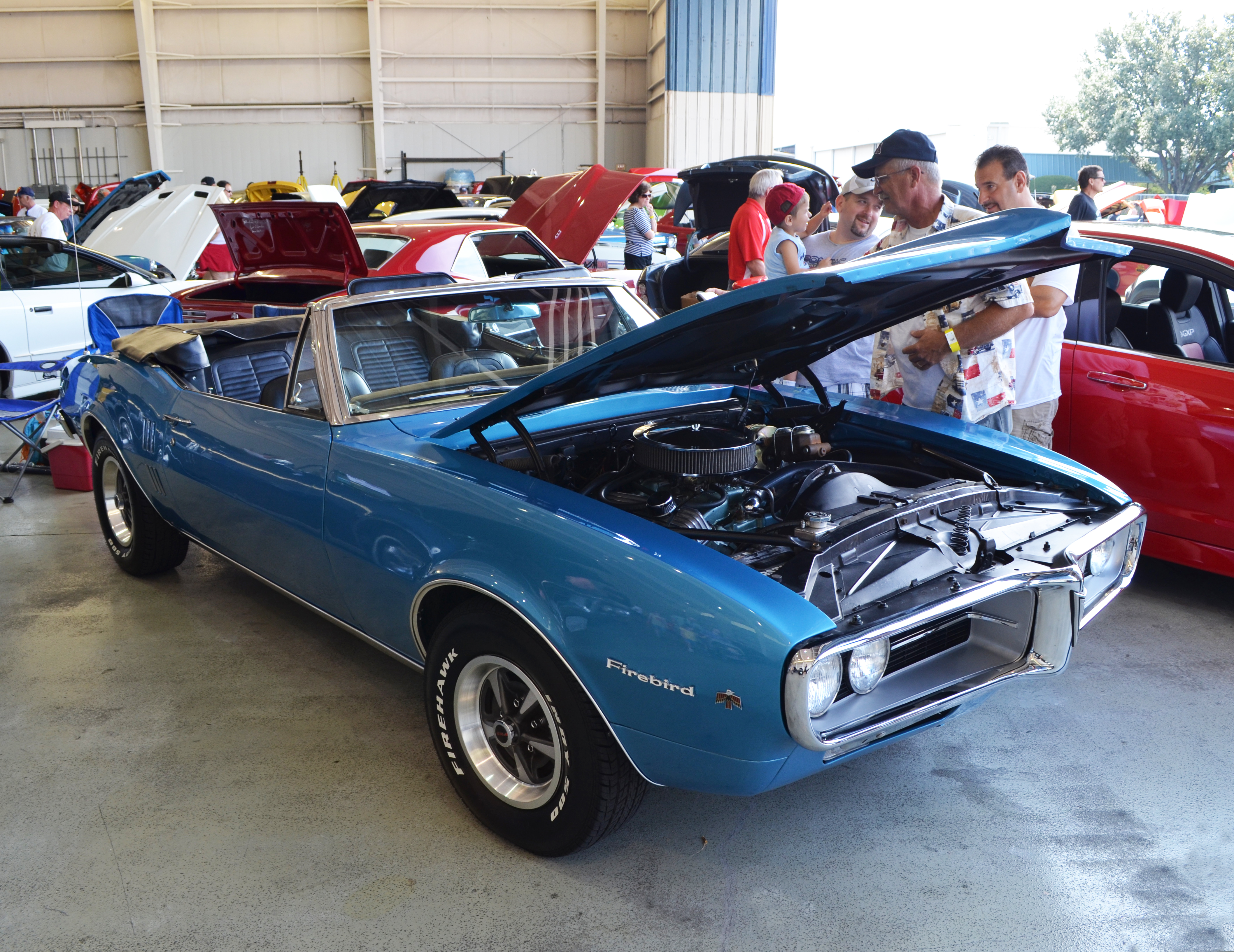 This beautiful blue ’67 400 Convertible with blue interior makes a statement. Also, note the red 400 coupe in the background. 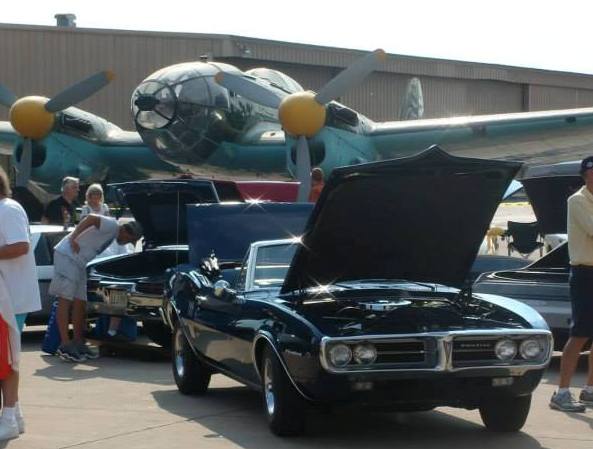 With a Heinkel Medium Range Bomber in the background, this ’67 400 convertible Firebird ignites the crowd. 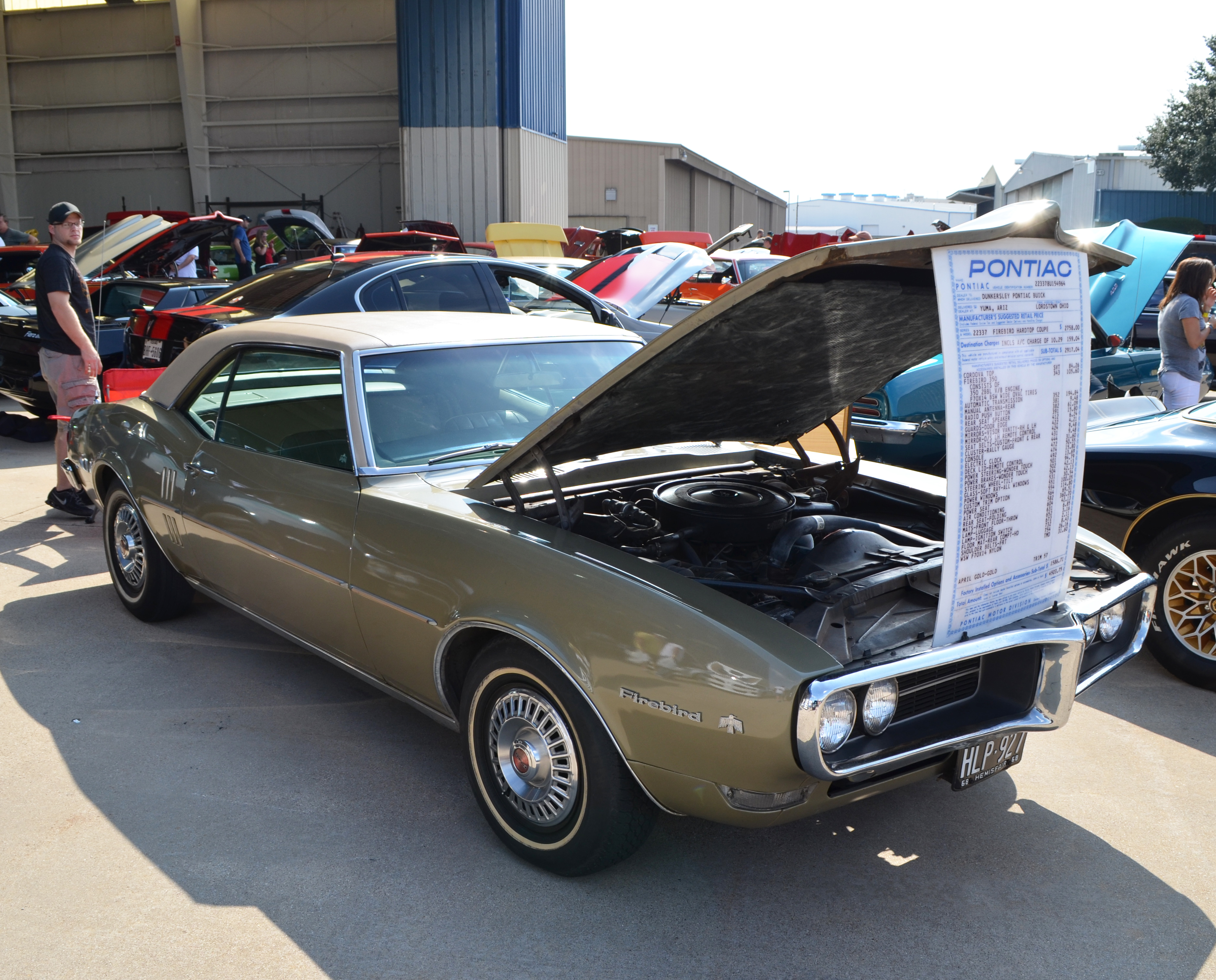 A rare April Gold ’68 350 coupe with a Cordova top on display in the Texas sun. 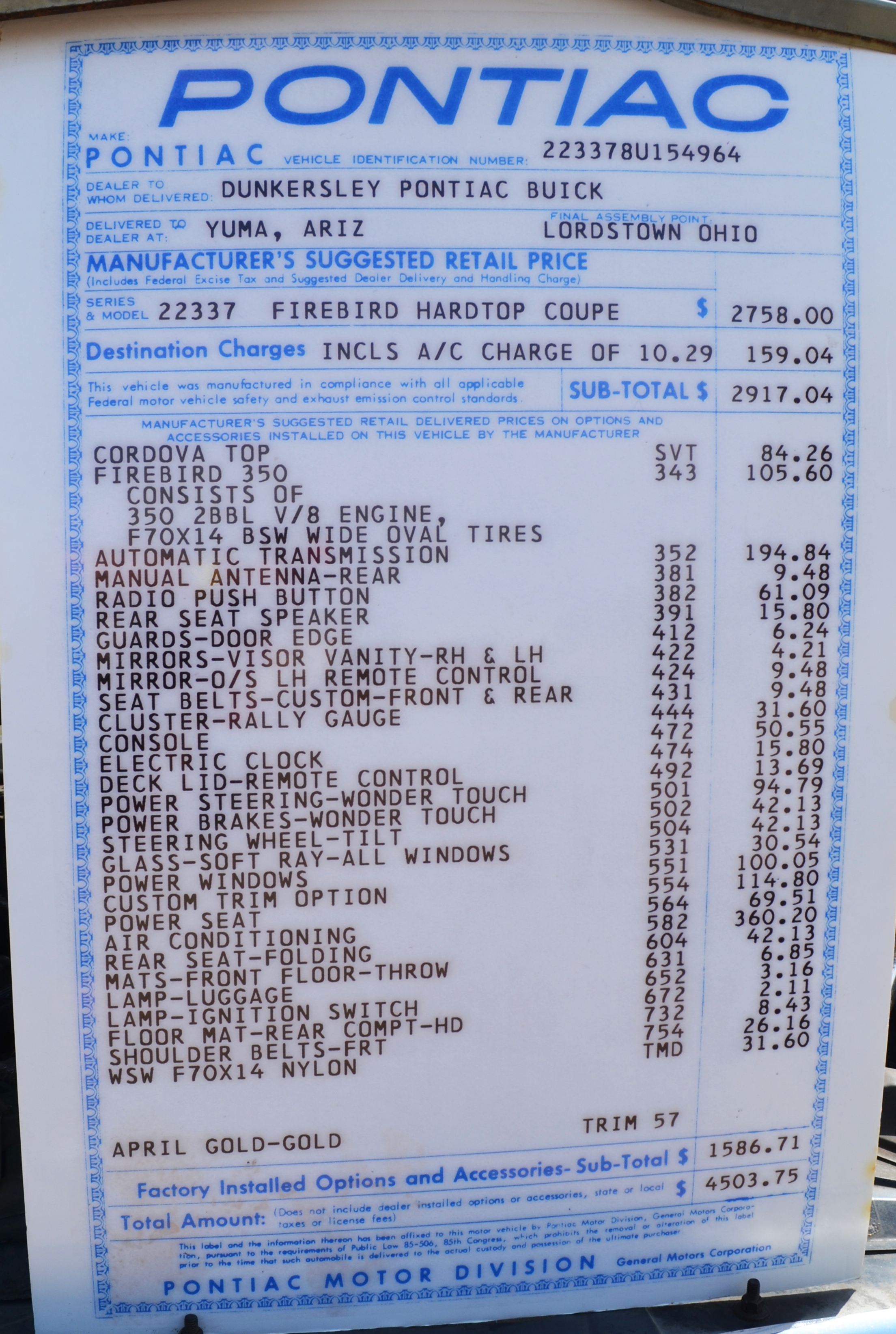 Take a close look at all the rare options on this April Gold ‘bird from Arizona. Deck Lid-Remote Control, Fold Down Rear Seat, Power Seat, Power Windows, making this a highly sought after collector car. 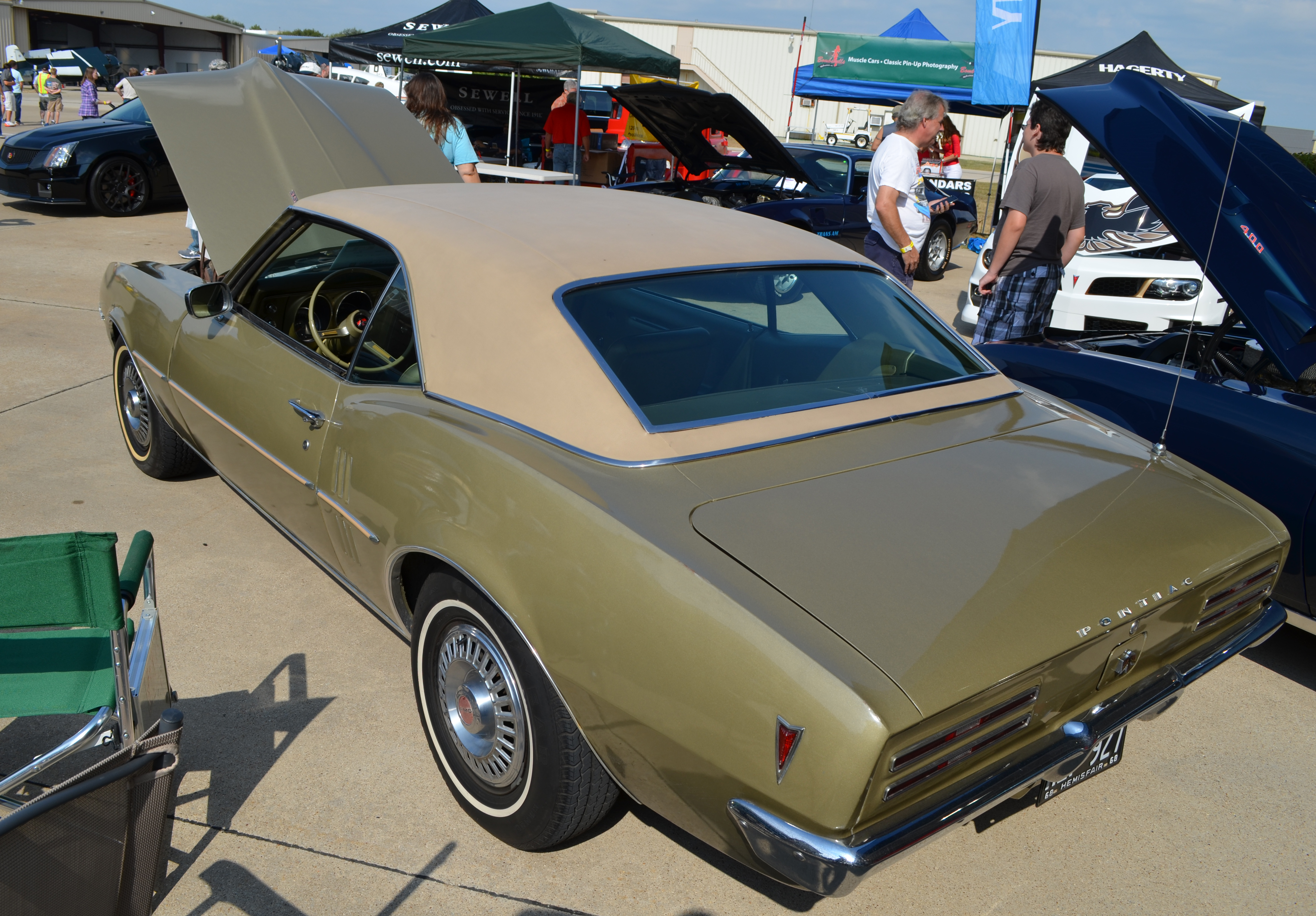 Looking great from any angle, Tim said the paint and apperence of this ’68 Firebird looked very orignal. 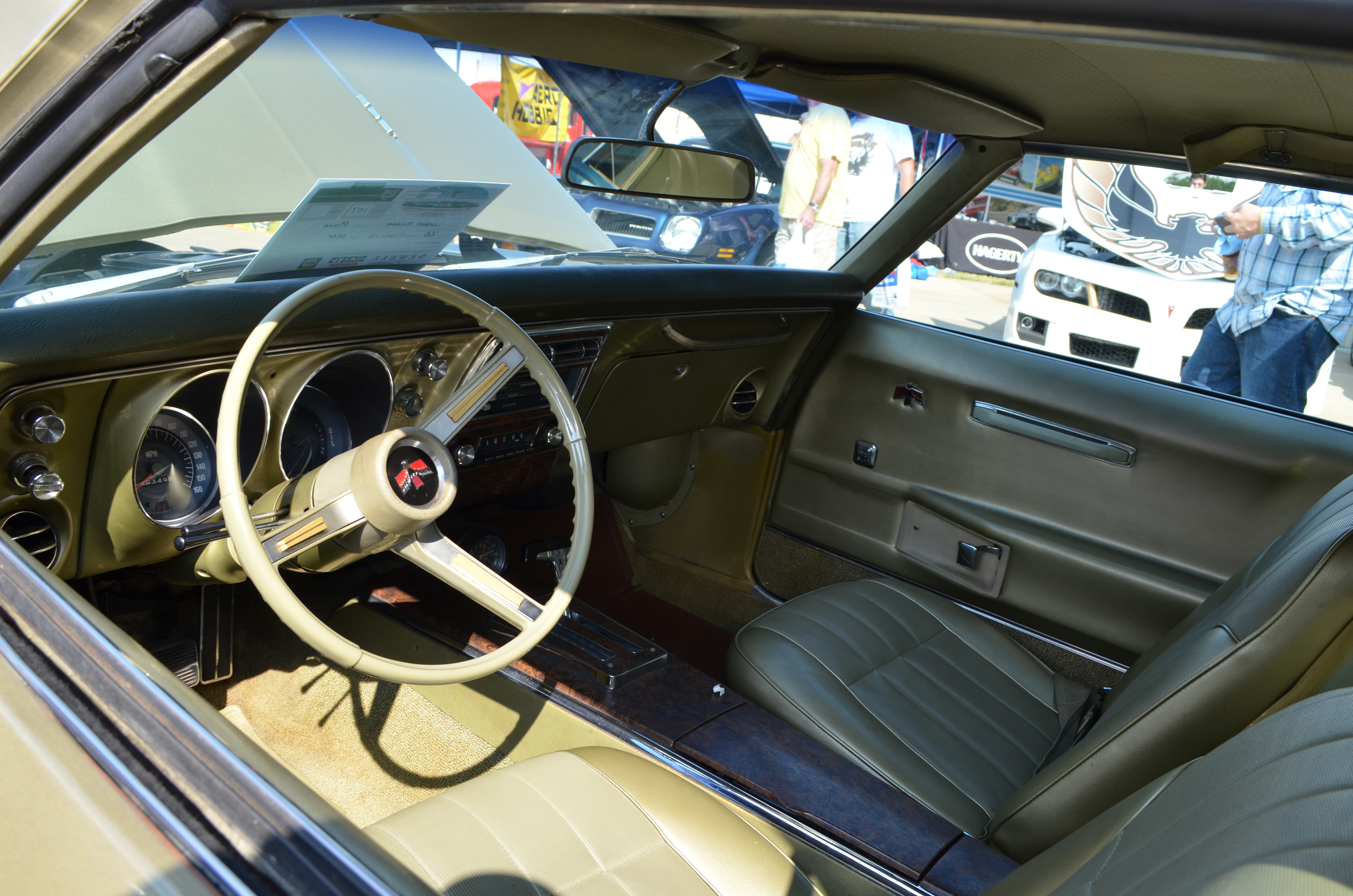 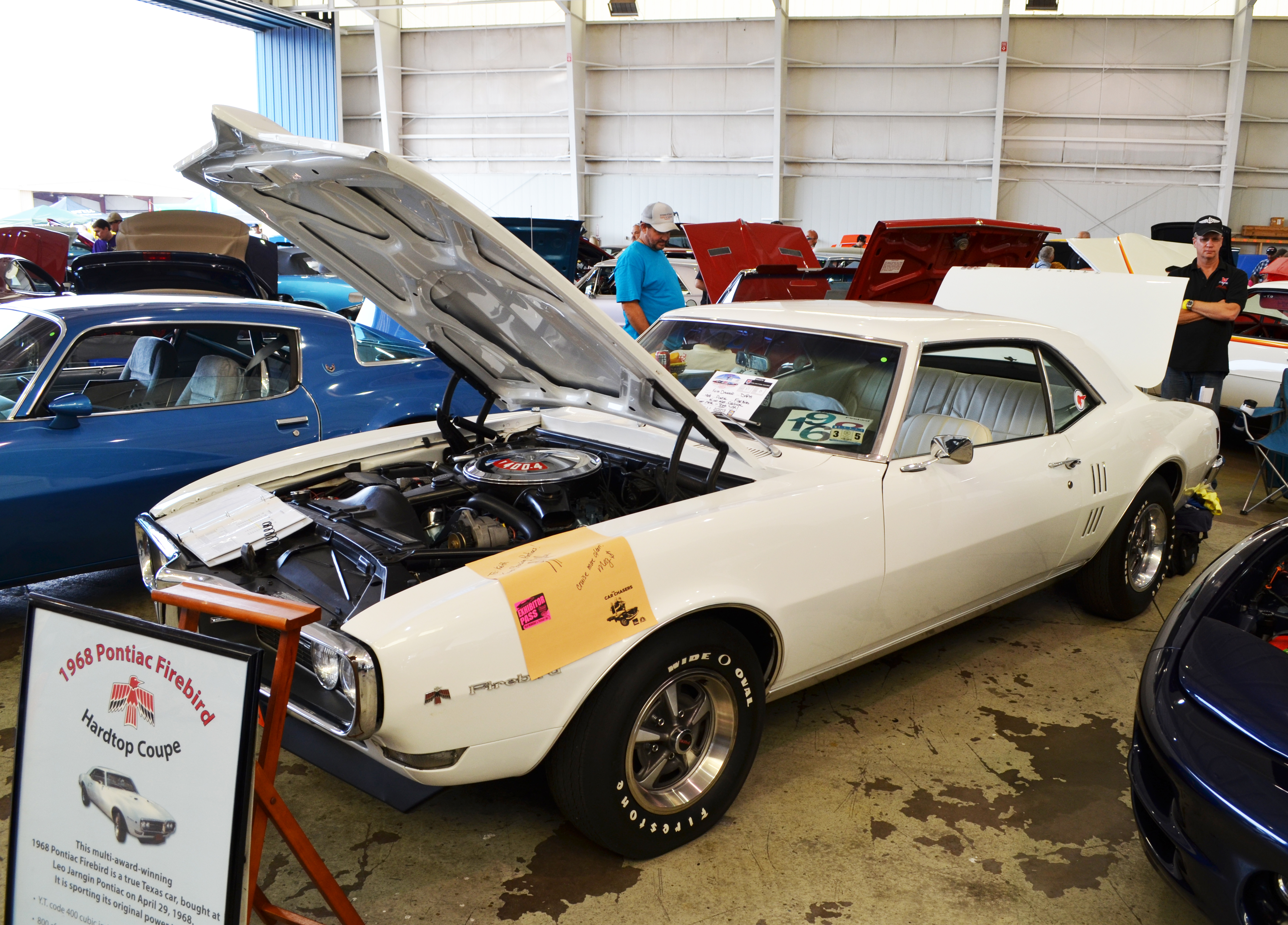 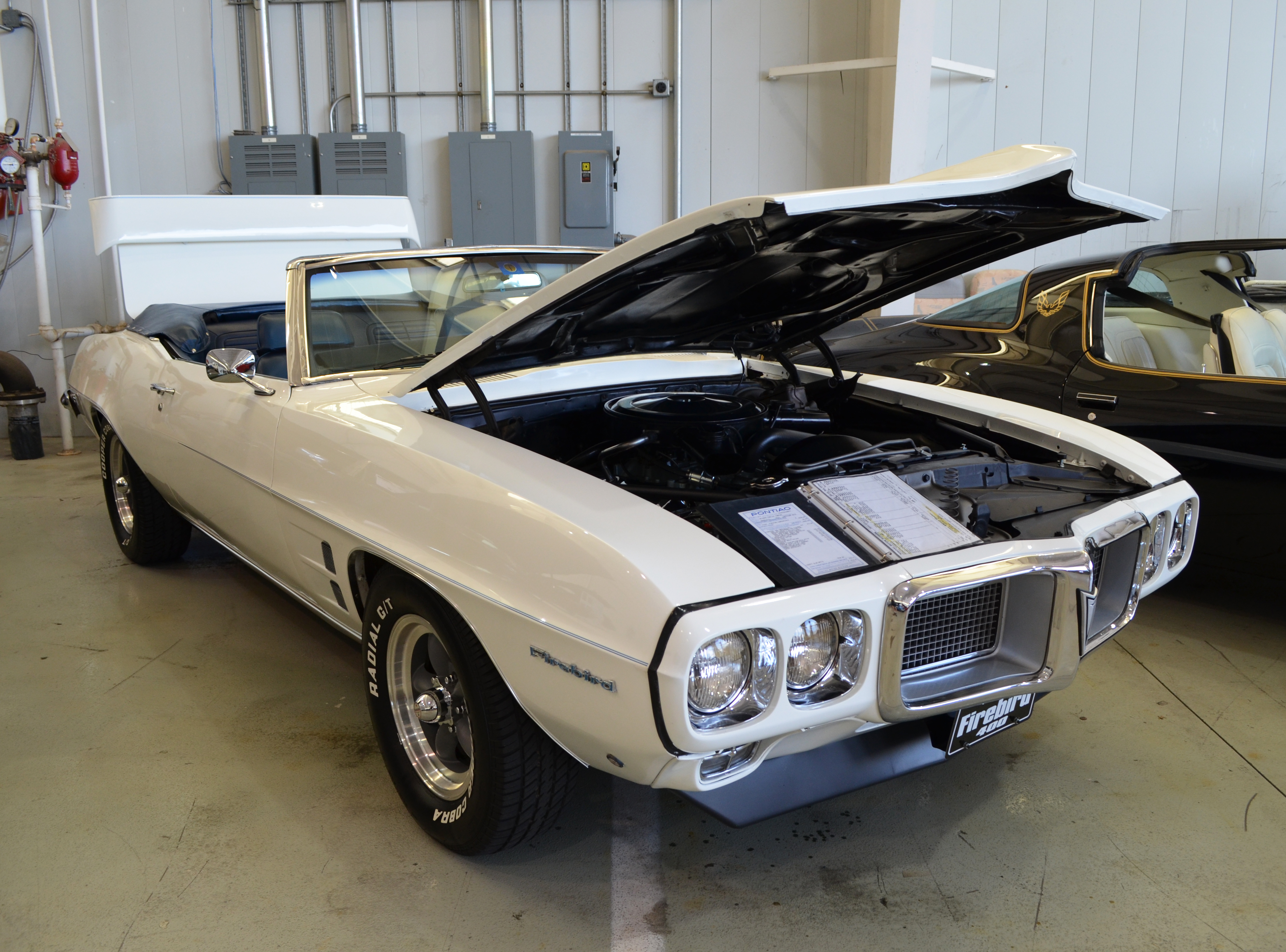 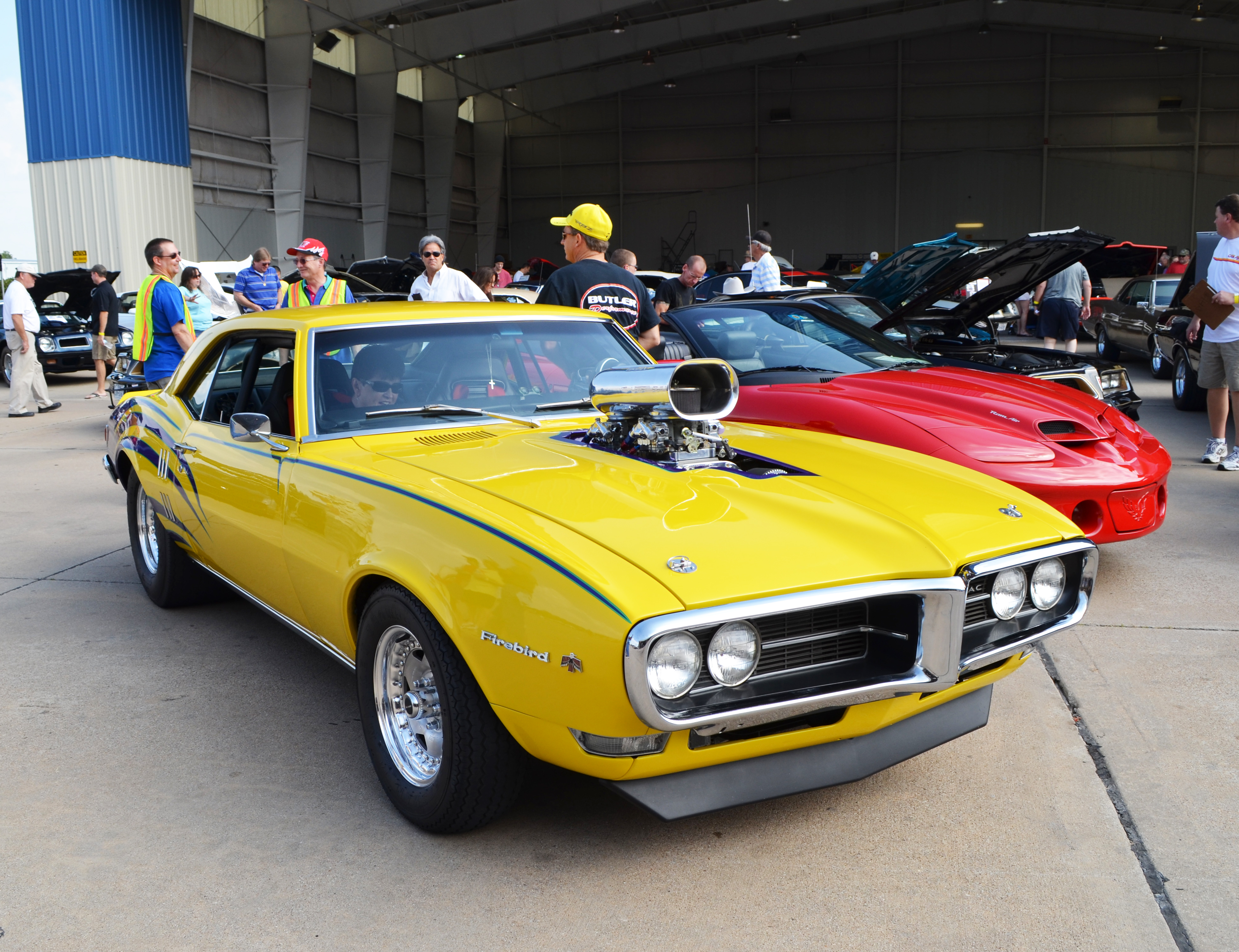 A crowd pleaser for sure – a bright yellow ’68 Firebird show car with custom paint! 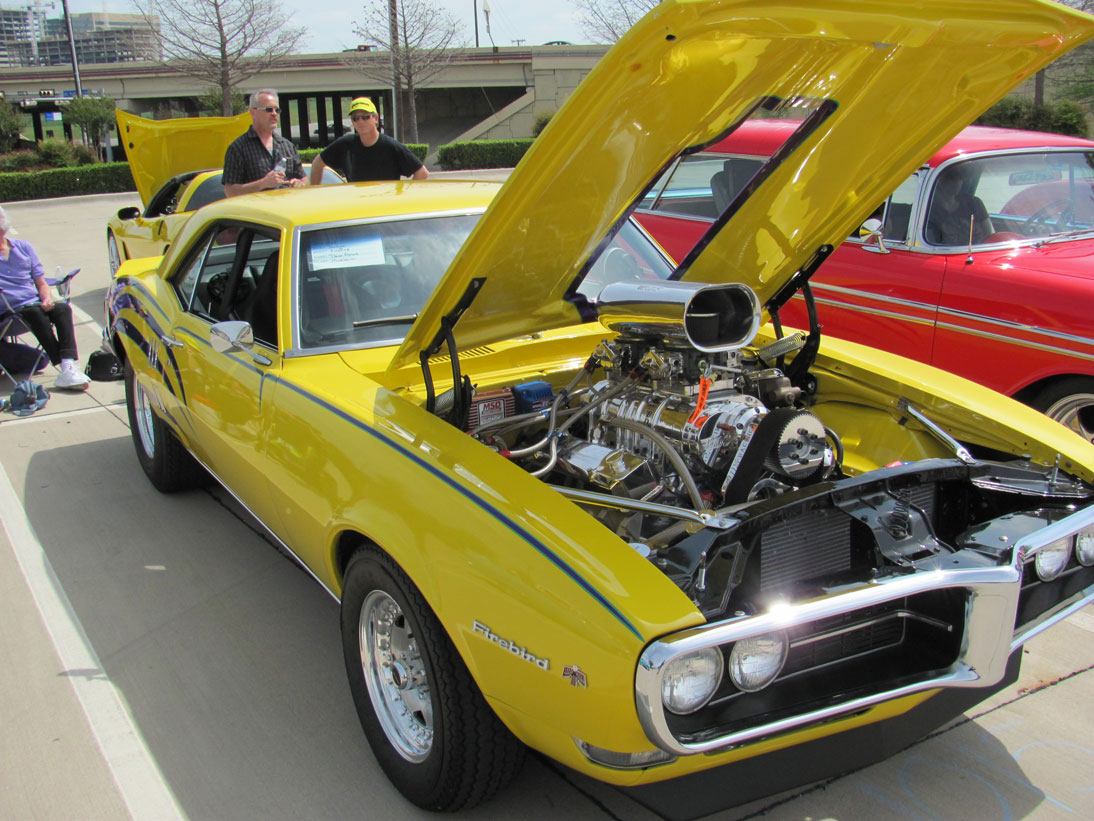 Plenty of power to spare with a supercharger and dual quads. 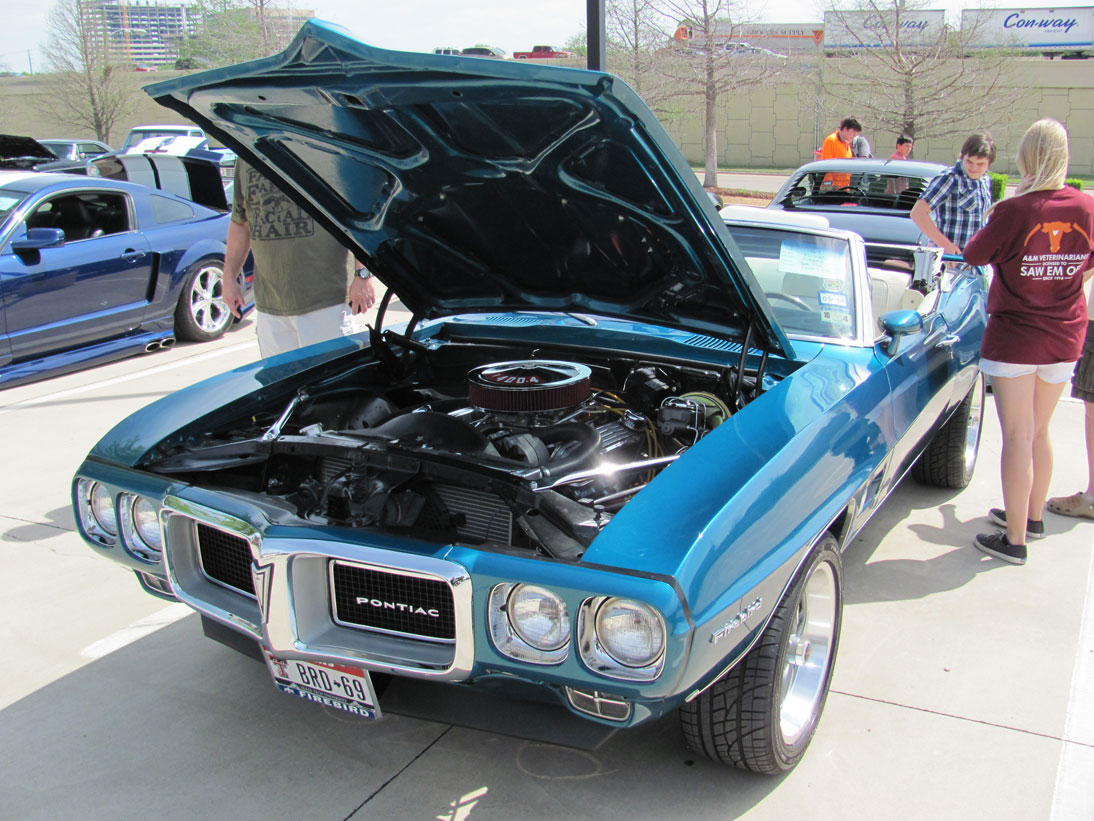 (Top and below) A 1969 Windsor Blue with Parchment convertible 350. All ready for summer cruising. 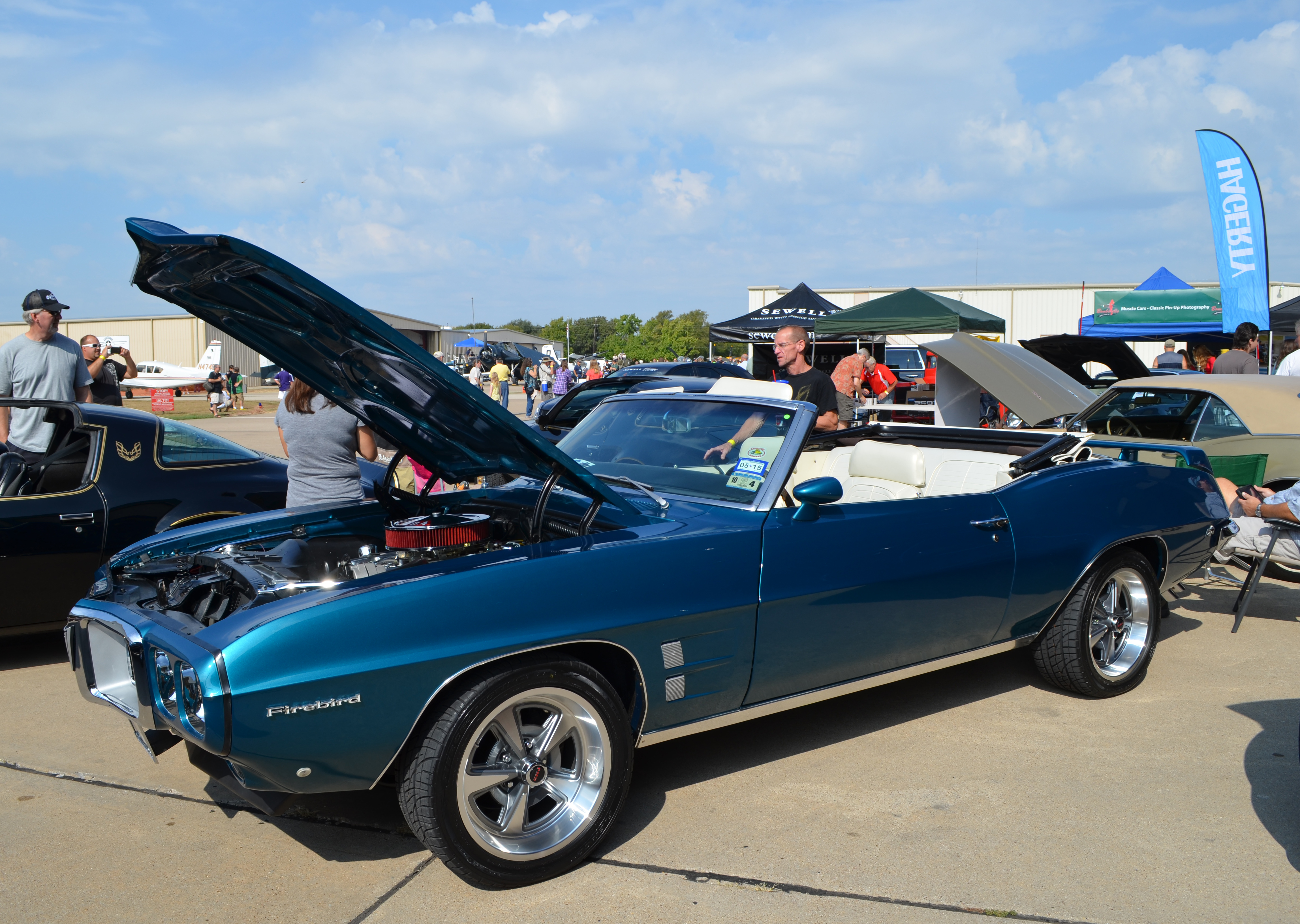 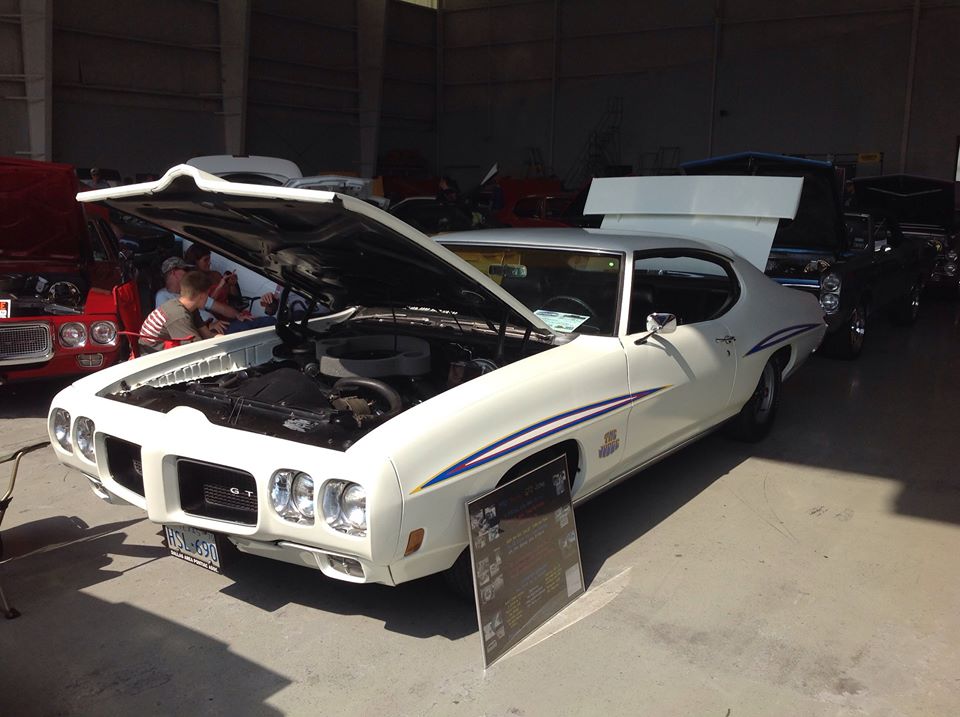 Of course there were also plenty of GTO’s at the show as well, like this beautiful ’70 white Judge. 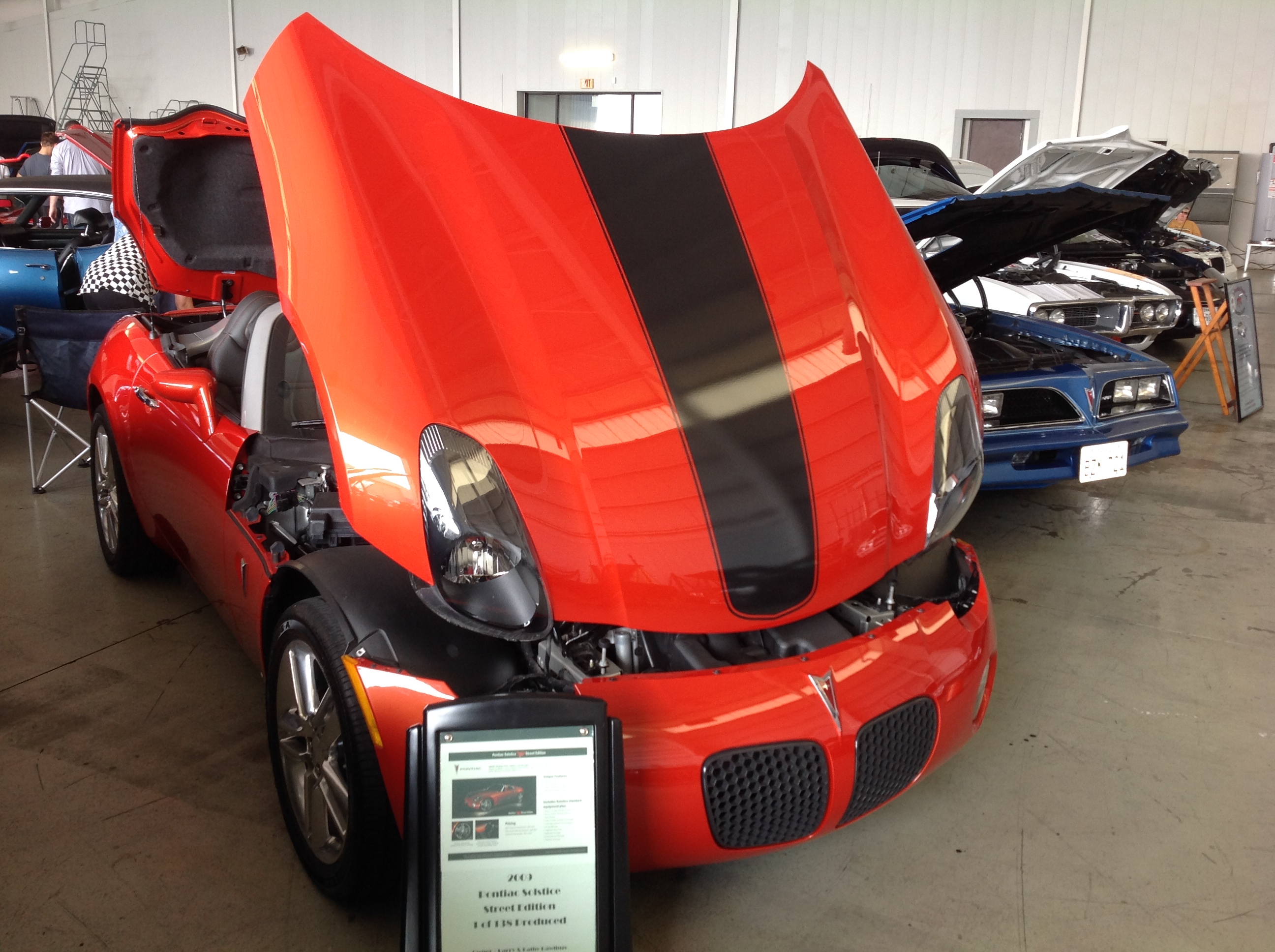 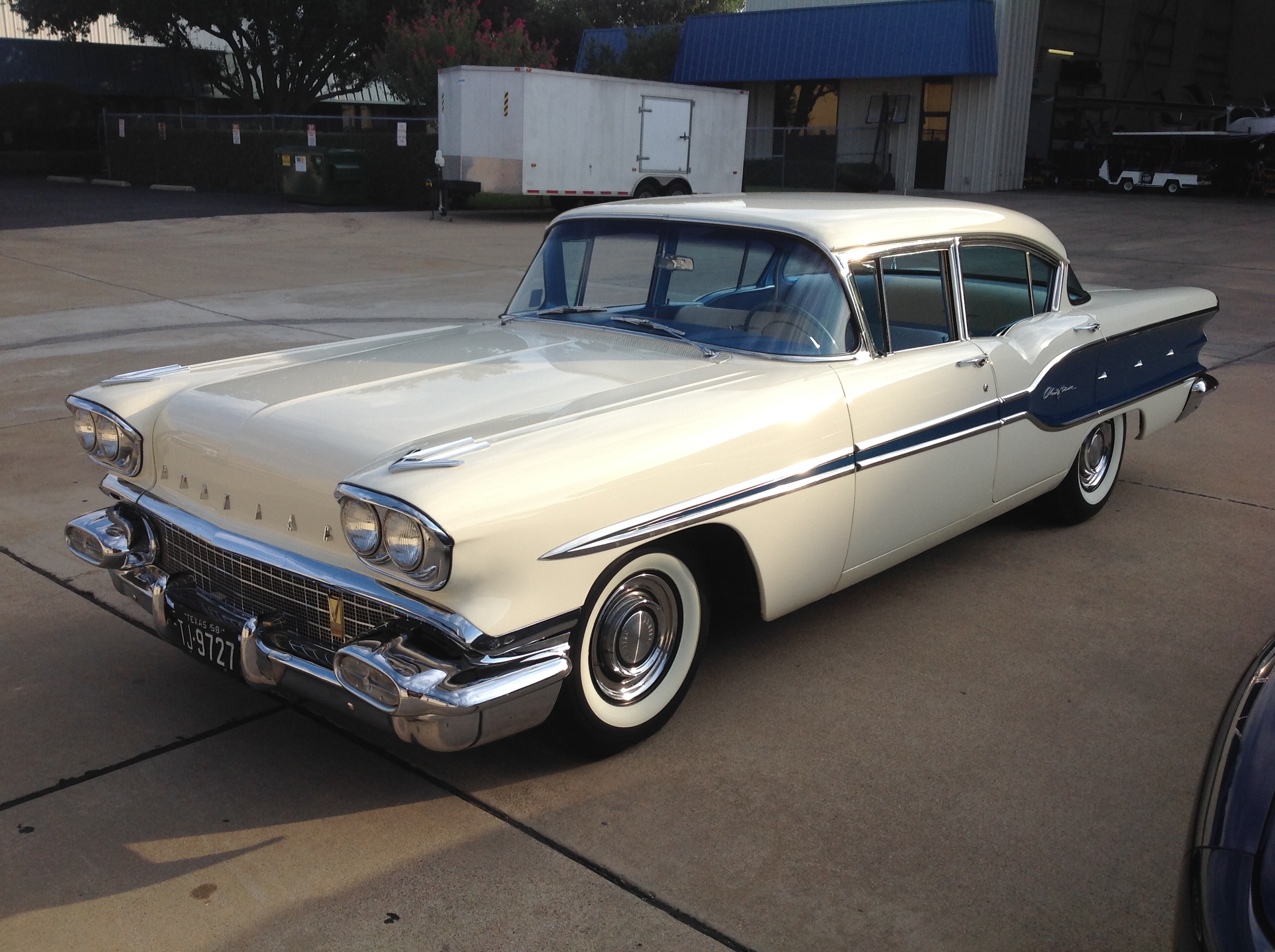 DAPA Member’s Frank and Brenda Moren won a second place award in the highly competitive “Restored 1958-1967 class” at the 2014 Dallas Autorama with this beautiful 1958 Pontiac Chieftain. 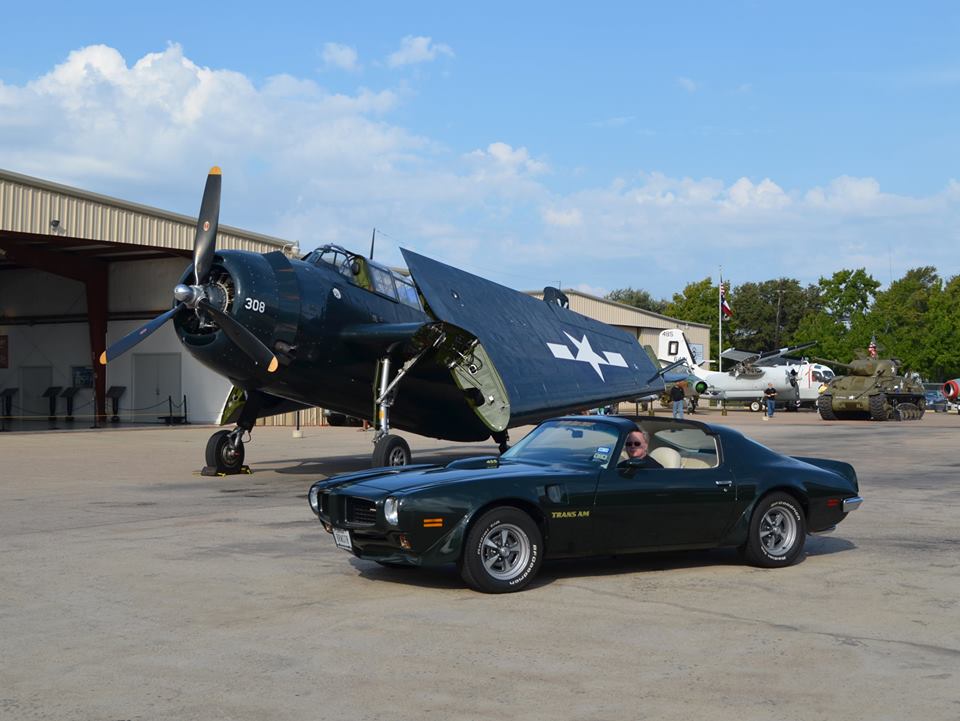 The Navy Blue F4U Corsair Fighter makes a great back drop for this 1973 Brewester Green Trans Am. Did you know during WWII Pontiac made the complicated air to water torpedos that this plane would have been equipped with in the war in the South Pacific? 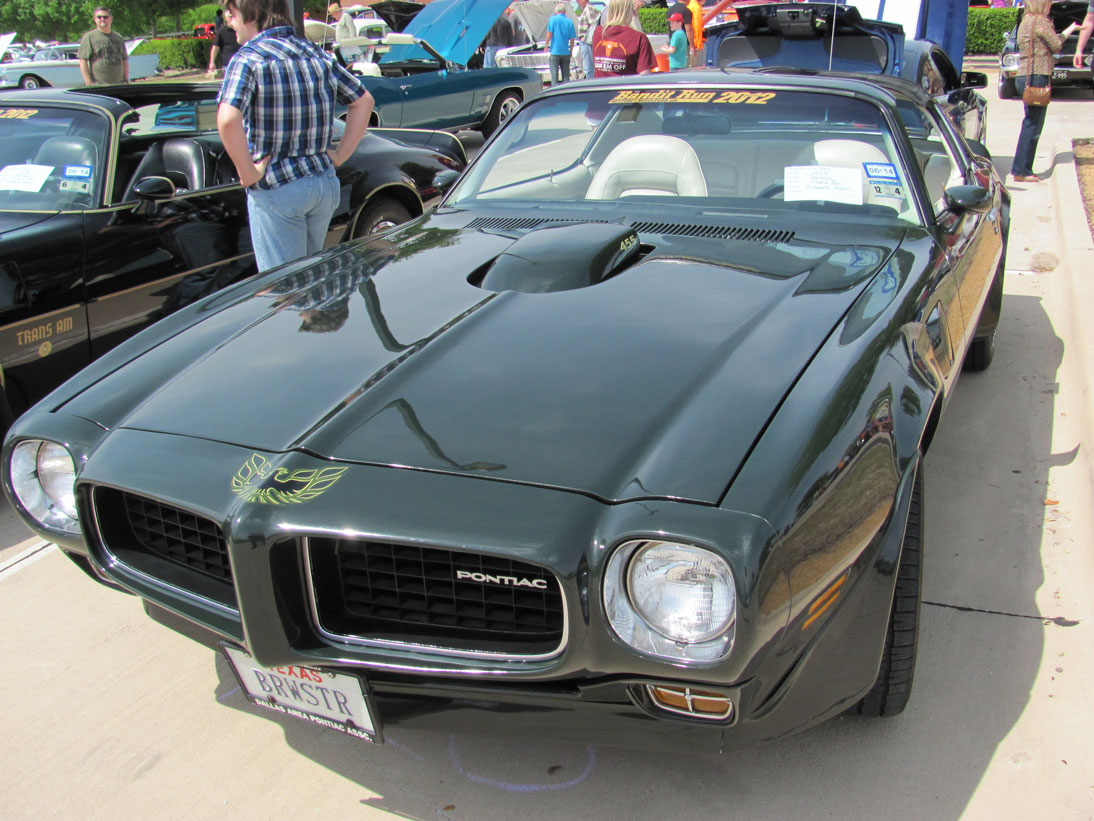 1973 was the only year Pontiac used Brewester Green on the Trans Am, and this one opted for the smaller “Bird” logo rather than the (new in 1973) “Screaming Chicken” whole-hood decal.

So if your in the Dallas area next September, make sure to visit this can’t miss planes and Pontiacs event.  It’s sure to put a smile on your face as you enjoy the American history and American hot rods!  Special thank you to Tim Dye and the Dallas Area Pontiac Association.