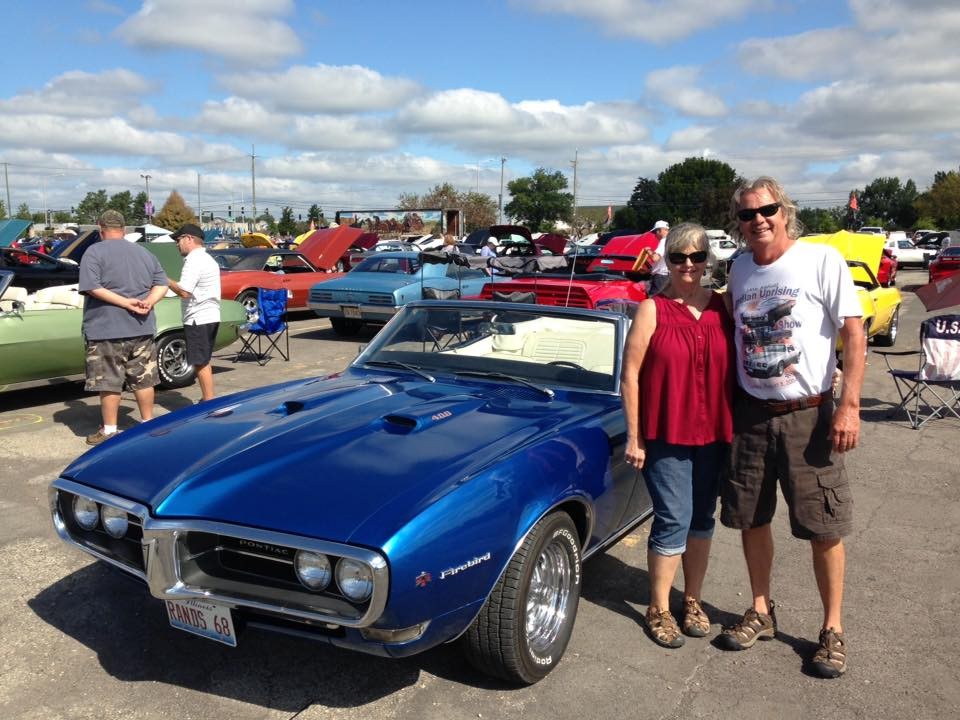 Club member’s Randy and Mary Smith with their ’68 blue convertible, with member Pete Abe in the background at the Indian Uprising.

2017 may just have been the best year so far for our young club. As we look back on our fourth full year, our thoughts turn to all the wonderful friends we have made, and all the great times we have had with our classic cars.  This year was extra special as we celebrated the Fiftieth Anniversary of the Firebird!

We experienced a 38% increase in growth with 32 new members joining the club in 2017.  In four short years, we have grown to 117 members sprinkled all accross America and Canada. Here are some brief highlights from the past year, and some things to look forward to in the year ahead. (Click on the highlights to take you to each story.) 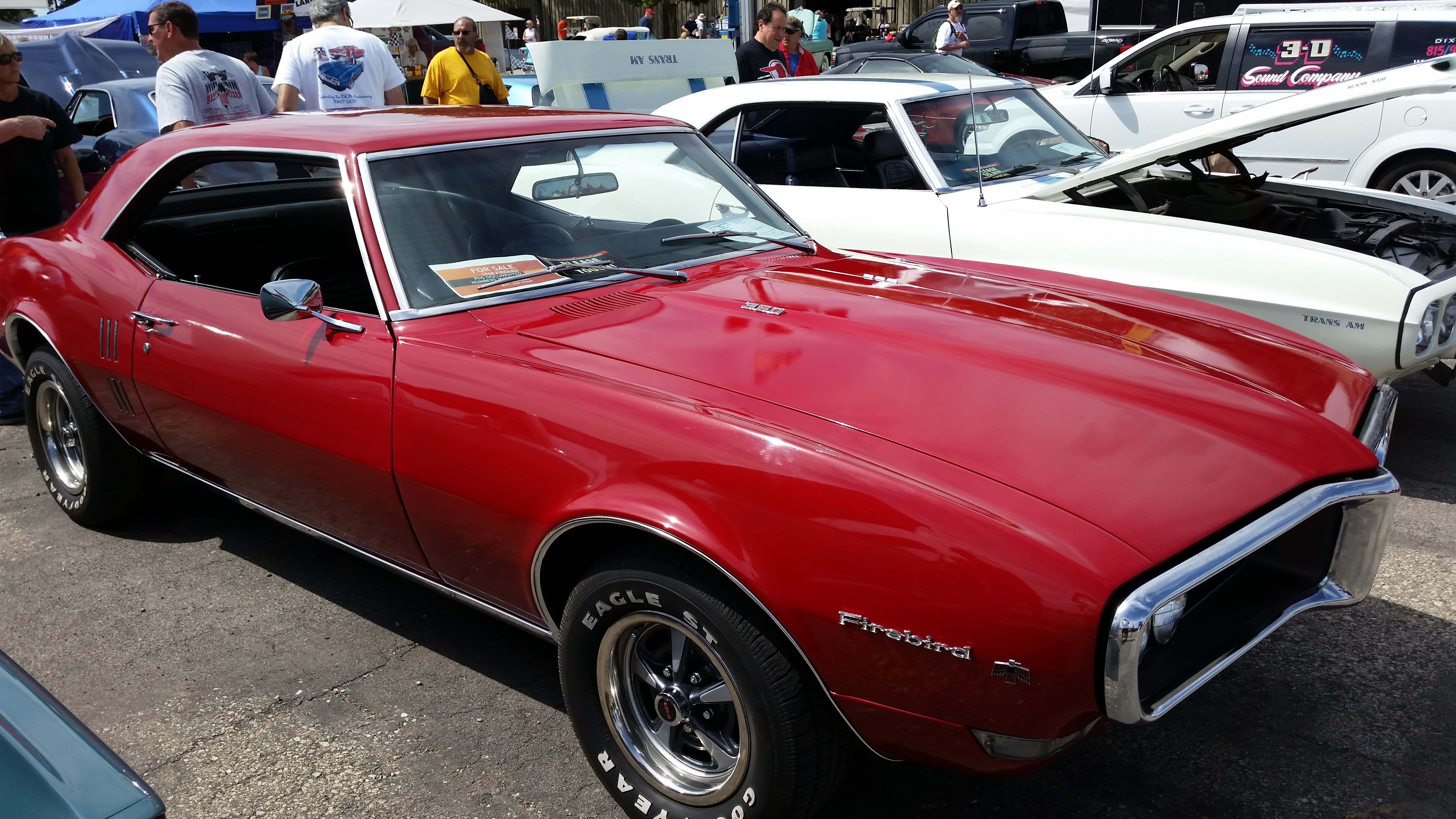 This ’68 Solar Red, 350 2 bbl, coupe won the first gen Firebird “Top Pick” award on Saturday at the Indian Uprising. In 1968 Pontic Motor Division sold more than 50,000 Firebirds like this with the base V8.

-We saw our club influence in the creation of a new book by author Rocky Rotella, called “The Definitive Firebird & Trans Am Guide 1967 – 1969.” 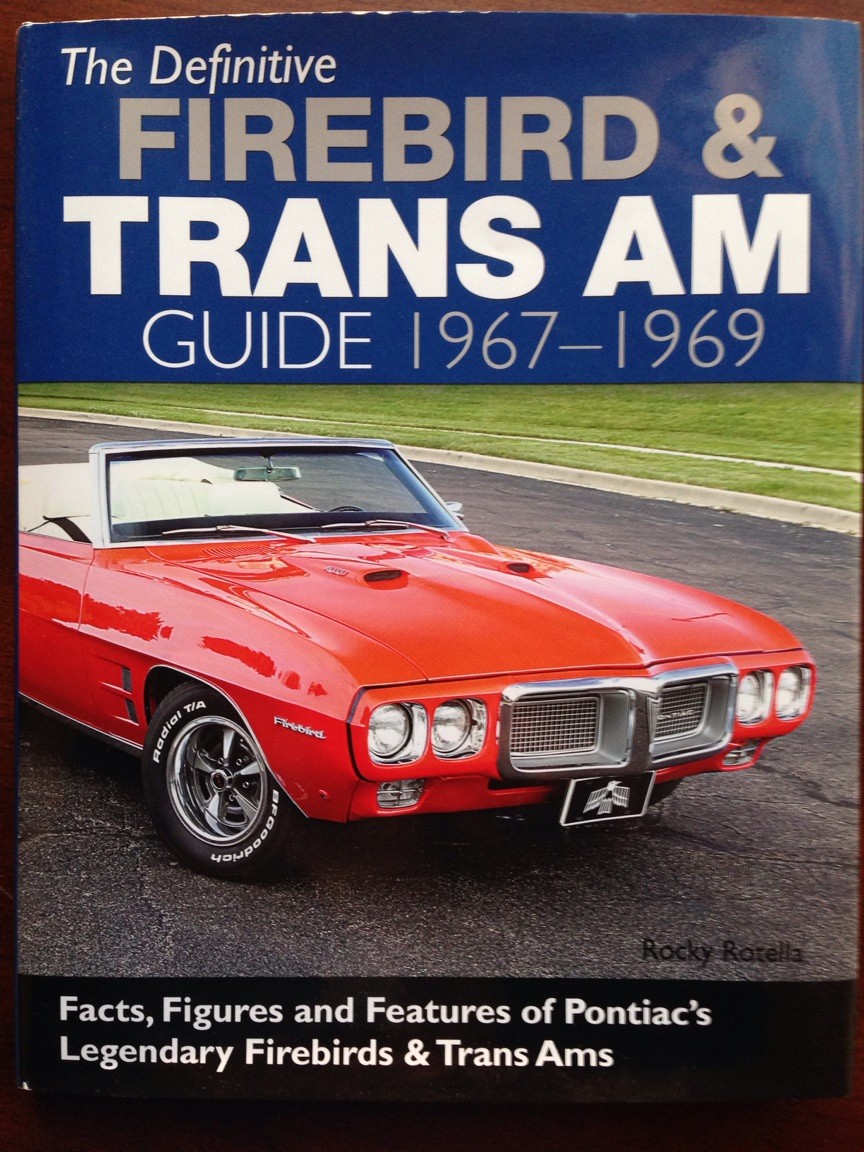 There are several photos of club member’s Firebirds in this book including Mitch Sexner’s 1969 Carousel Red 400 convertible on the cover. Rocky also mentions our club in his acknowledgments section. 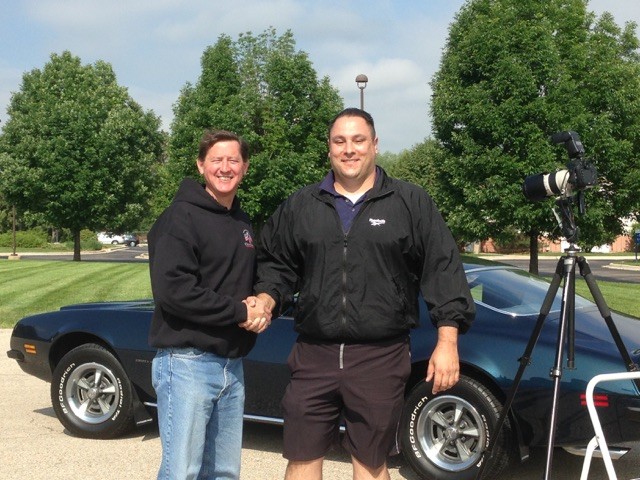 We were able to assemble several first gen Firebirds for Rocky’s new book.  Here we are standing in front of my friend Terri’s mint, second gen ’74 Formula, that is destined for his next book. 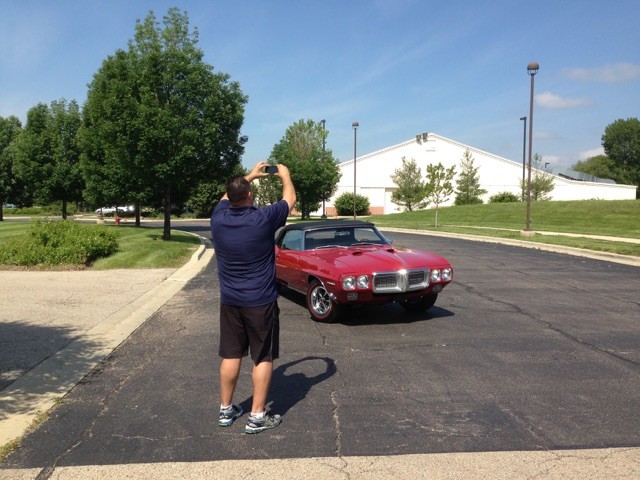 Rocky creating a great pic for his new book – which you really need to get, for great first gen pics and amazing fresh content of our favorite car! 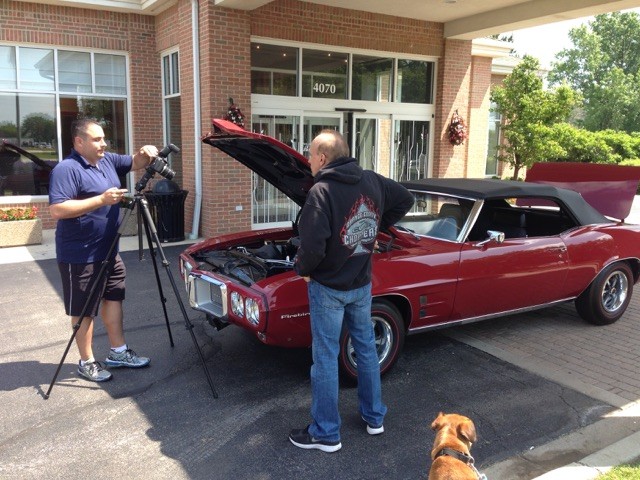 Rocky Rotella and Dave Armstrong, talking by Dave’s highly optioned, national show winning, Ram Air III Firebird convertible. I can’t even imagine the amount of Firebird knowledge combined in their two heads.  What a privilege it is to have access to them in our club!

On the square in Pontiac Illinois – the perfect town to host our All Firebird Day at the POCI Museum.

-Our All Firebird and Trans Am Day is quickly becoing a big deal in the Pontiac community.  Co-Sponsored with the POCI Museum, we are gaining national recognition with this event. This year, we had the biggest turn-out yet, pulling over 85 Firebirds of all years and types from states further and further away. We have so much fun, enjoying the Firebirds which raised money for the non-profit museum. 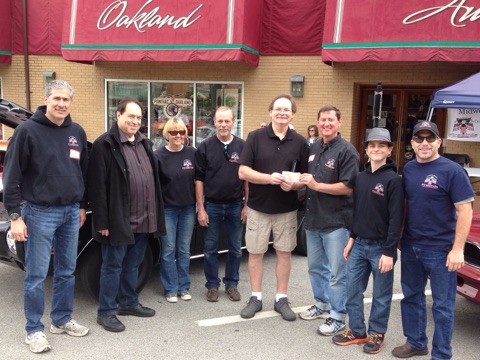 Museum Director, Tim Dye receiving our donation with several of our long-time members.

This year our event generated over $4,300 to the museum’s bottom line, which included a direct donation of $1,000 from our club. We seem to be creating a positive influence within the entire Firebird and Pontiac community, while helping preserve a part of the classic car hobby. You won’t want to miss it this year on May 20th 2018. 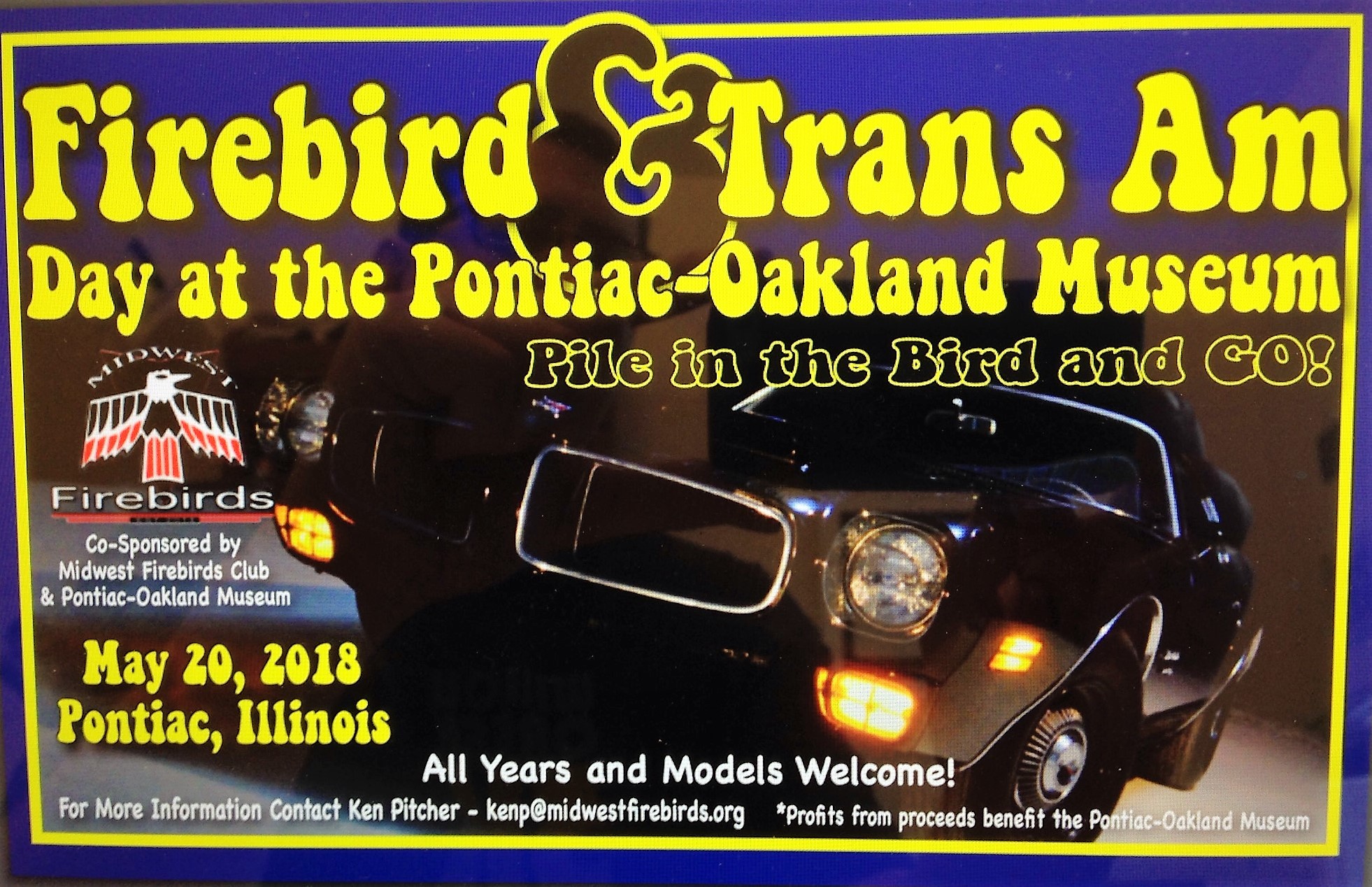 -We continued to strengthen our relationship with the Cruisin’ Tigers GTO club in 2017.  They join us every other Saturday in the summer for Cars and Coffee, as well as came on our Fall Colors Cruise in October.  However, the biggest thing we did with them in 2017 was the Indian Uprising. 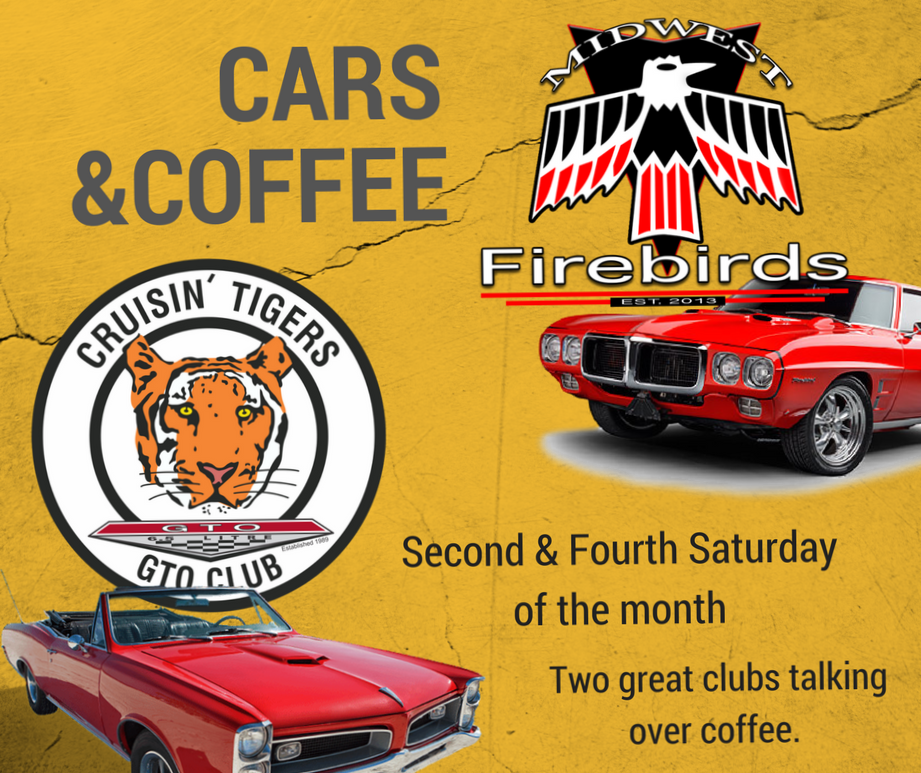 Member Rob Rourke’s ’67 Royal Bobcat tribute at one of our Cars & Coffee events. 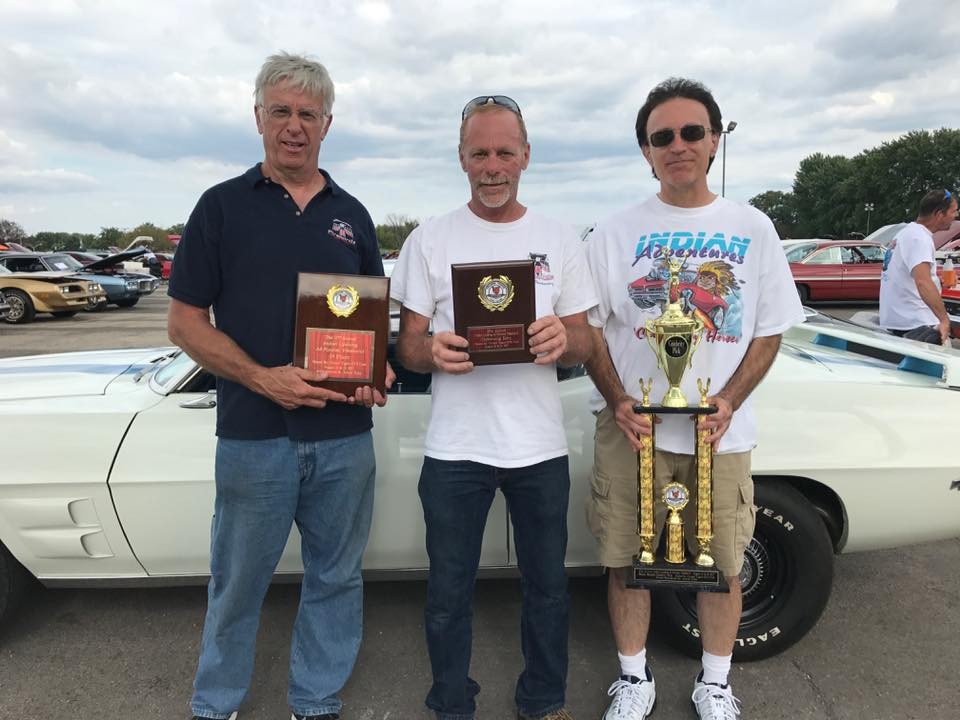 Club member’s bringing home the hardware at the Indian Uprising last August. (From left to right, Ron Vaseleski from North Carolina, Mike Gudenschwager from Indiana and Mike Noun from Illinois.)

We were the featured club of the Uprising in 2017 as they celebrated the 50th Anniversary of the Firebird. This exposure generated awareness for our club in all of their advertising, show literature and website. And our club really responded. 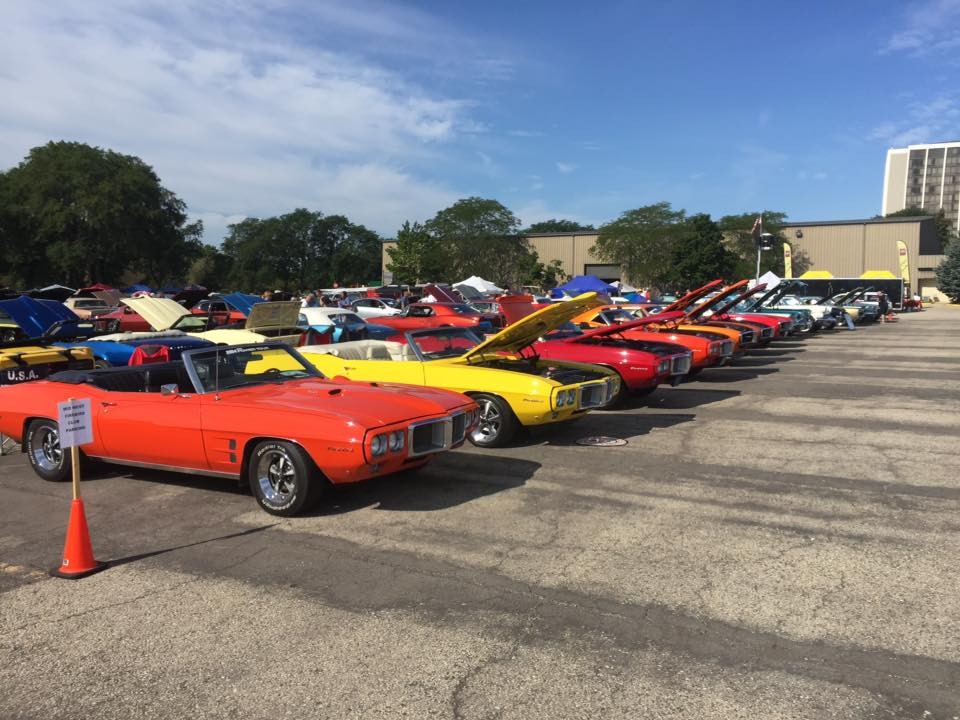 So many colorful Firebirds from the ’60’s, joined us, both in and out of the arena. This big event draws the most members to one location year after year!

With 52 first gen Firebirds in one location, this had to be the largest gathering of ’67 –’69 Firebirds on the planet, over the past decade! Save the date for this year’s event on August 10th – 12th 2018. 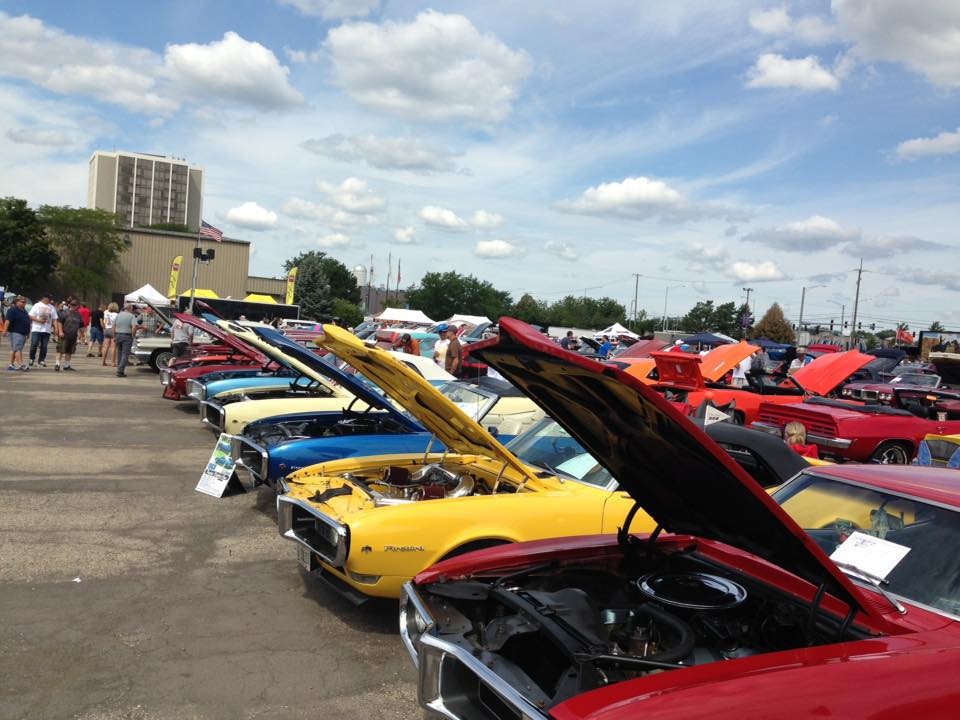 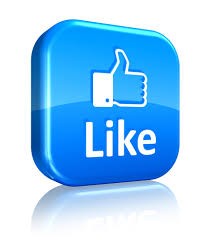 -I can’t say enough about our Facebook page being the way many people are first learning about our club. Growing daily, we have close to 2,900 people following us not only in America, but all around the world. We want to say “thank you” to member Ayham Rimawi, who is the co-administrator of the Members Only Facebook page and did an incredible job with several live video streams this year from shows he attended. 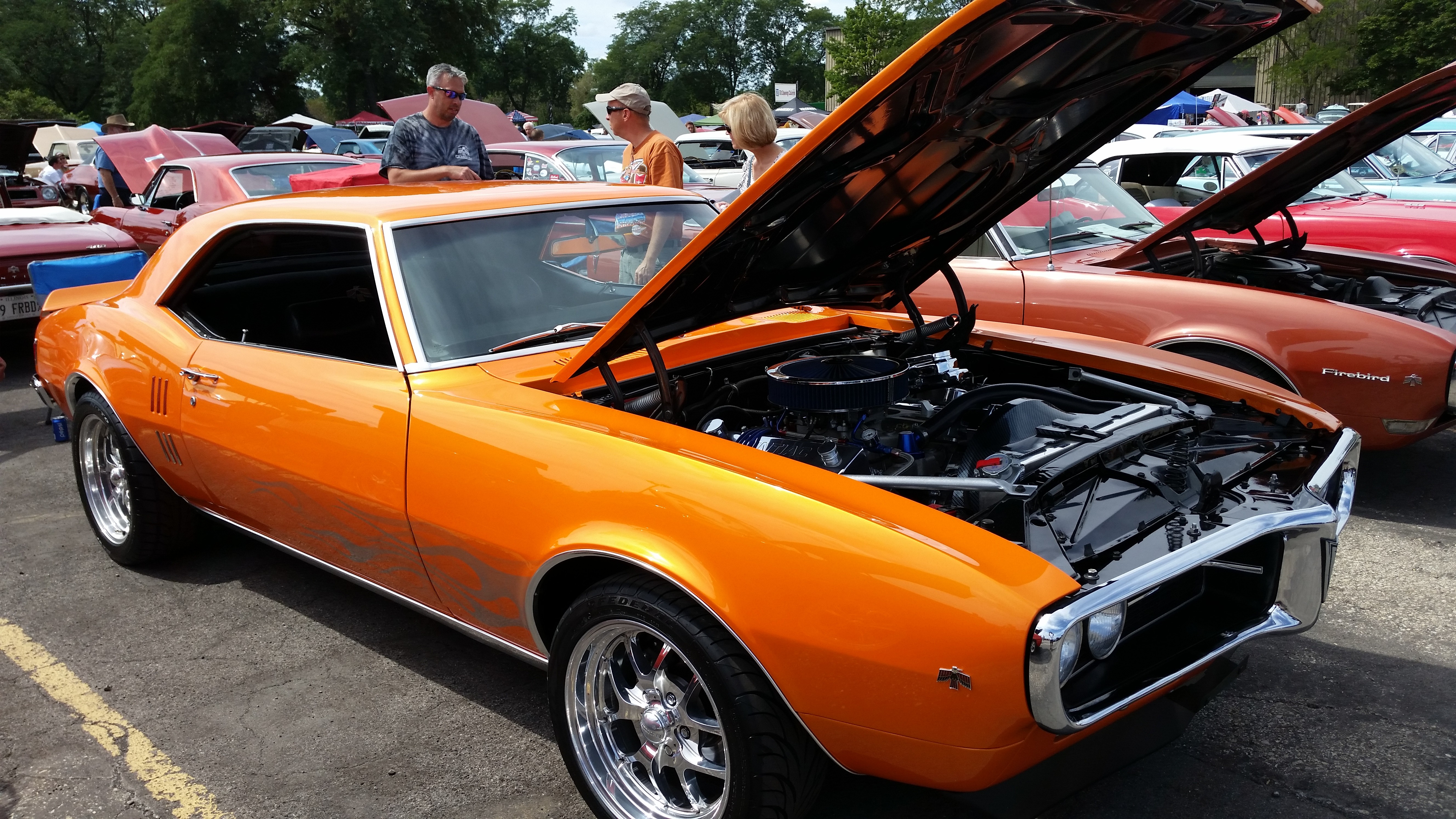 This year we also partnered with a new vendor for club logo merchandise, with several new items, like garage signs and banners, coffee mugs and more, as well as hats, t-shirts, polos and jackets. Click here to take you to the webstore.

-Here’s some examples of our club logo items available to members:

Wisconsin member, Kevin Nashold’s ’67 Tyrol Blue with Parchment interior convertible was a big winner at the Trans Am Nationals this year, taking home a first place in class trophy. 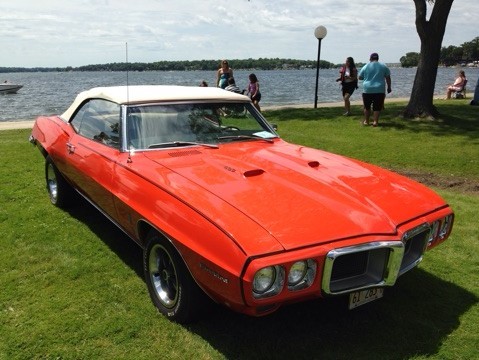 Club Treasurer Mike Kessler’s ’69 Carousel Red, original Parchment interior convertible at the “Cars Time Forgot” show in Lake Delavan Wisconsin in July. This has always been one of my favorite shows of the year because of the scenic location. 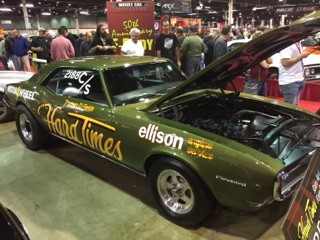 When we put our cars away for the winter, the Muscle Car & Corvette Nationals in November hits the spot! This year they had a special display of Firebirds for the 50th Anniversary – including this freshly restored, historically significant, RA II Hard Times race car driven by Truman Fields.

Truman and his brother were both on hand for the unveiling, and were kind enough to join us for lunch!

Looking forward to warmer days in 2018:

Please check out our Events Page and try to join us when you can this year. The two big events of the year will be the Firebird and Trans Am Day at the Museum on May 20th, and of course the Indian Uprising on August 10-12th. For the Museum day, several people will stay overnight on the 19th and attend the Pontiac Village car show on Saturday afternoon. 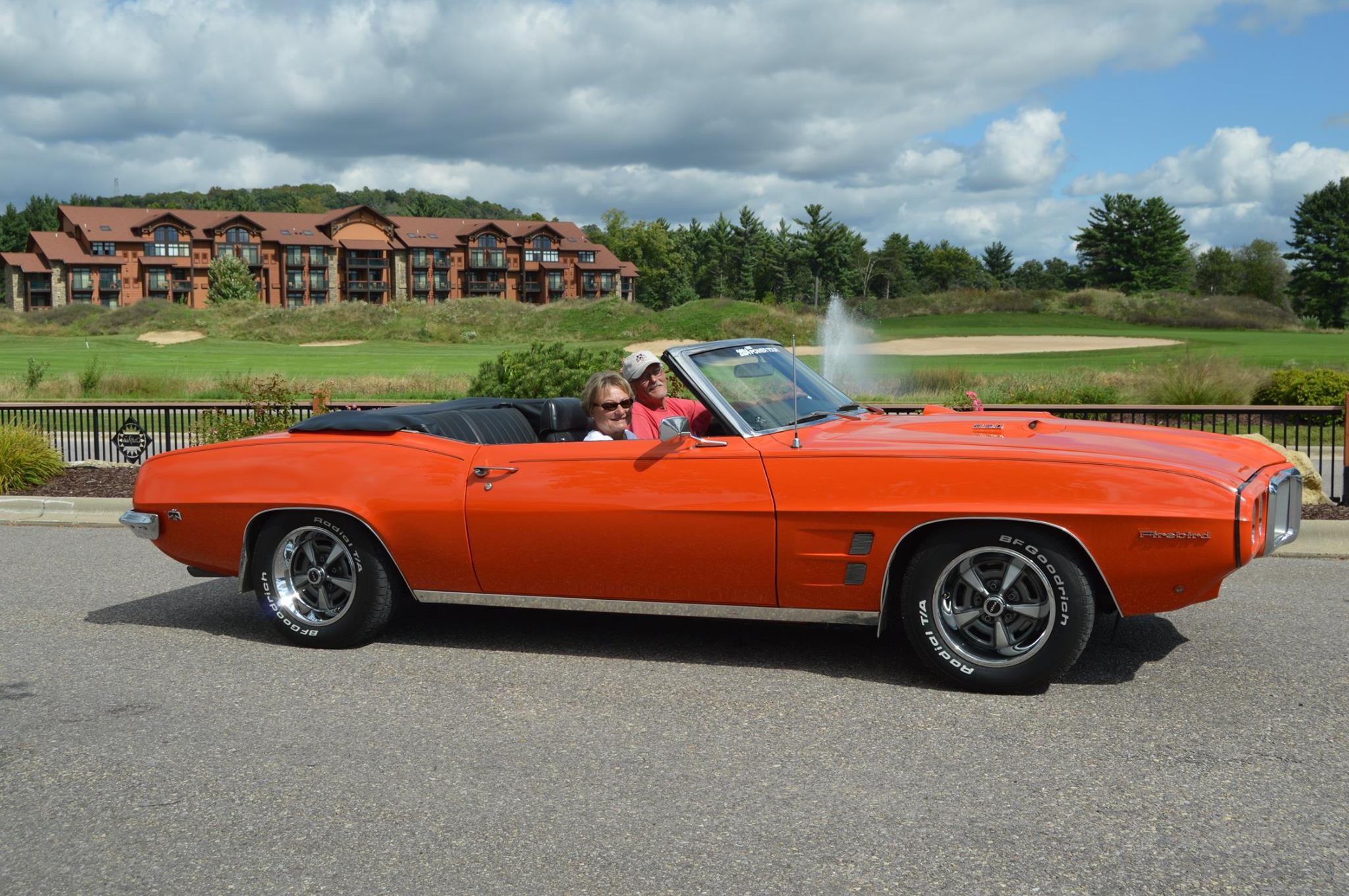 Member’s Hank and Mary Kolross at the Wisconsin Dells.

But the biggest thing happening this year will be the National POCI convention right in our back yard in the rolling hills of the Wisconsin Dells in June, from the 24th to the 28th. Since this is so close to our epicenter in Chicago, many of us should be on hand in the Dells. Maybe we could even arrange a caravan to travel up together? Sprinkled throughout the year will also be several local car shows and continuing with Cars and Coffee, and fun cruises like the Fall Colors Cruise.

So why not join us in 2018?   Now is the time to get started with us for the new year.  Membership dues is still just $25 for the year. We now accept payment by PayPal or we still take paper checks if that is better for you.  Just send to our East Dundee address, made payable to “Midwest Firebirds.” 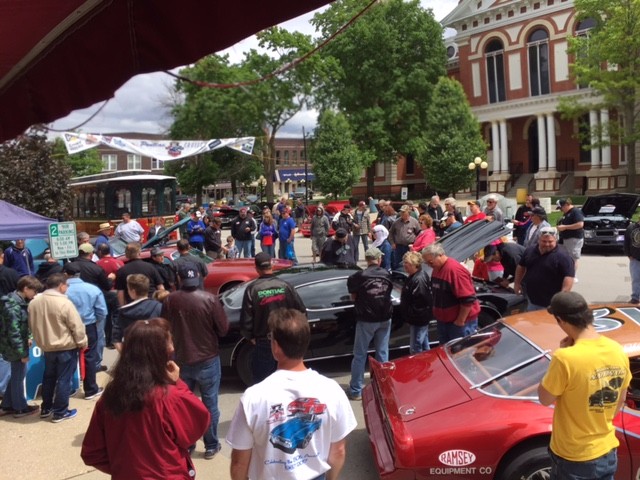 What a great turn out at the All Firebird Day last year.

Finally, we need to thank two groups of people who are behind the scenes, but we rely on for support throughout the year – the club’s Executive Team and our Technical Advisors. The club Board Members and Officers keep the business side of the club running smoothly.  Vice President, Ian King – Treasurer, Mike Kessler – Membership Chair, Mike MacEachern – Executive Members, Mark Boratto and Mike Ludy, Club Photographer and Pontiac Village Liaison, Dave Sullivan, and myself as President. 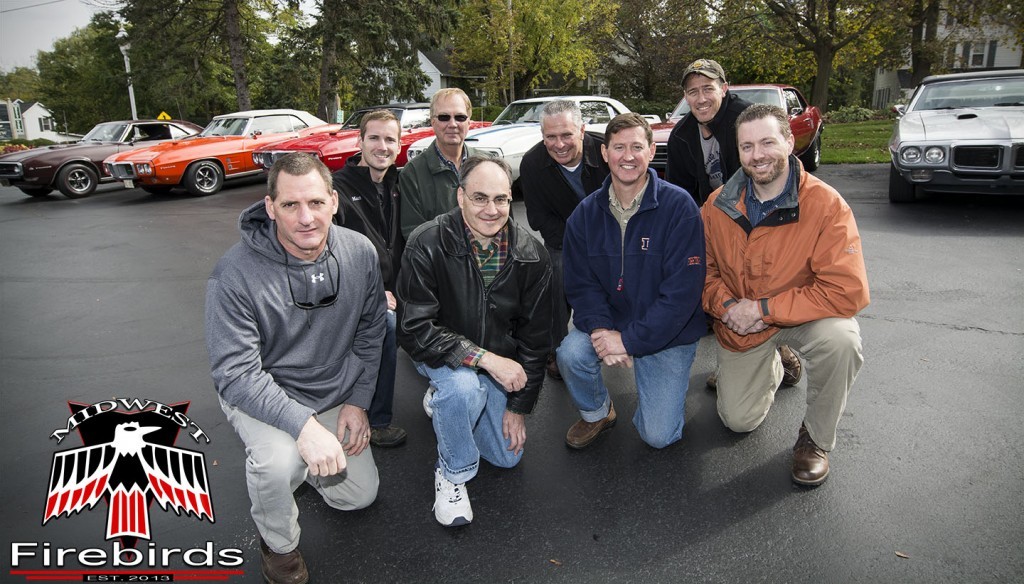 The origial group of members at the first annual Fall Colors Cruise in 2013. 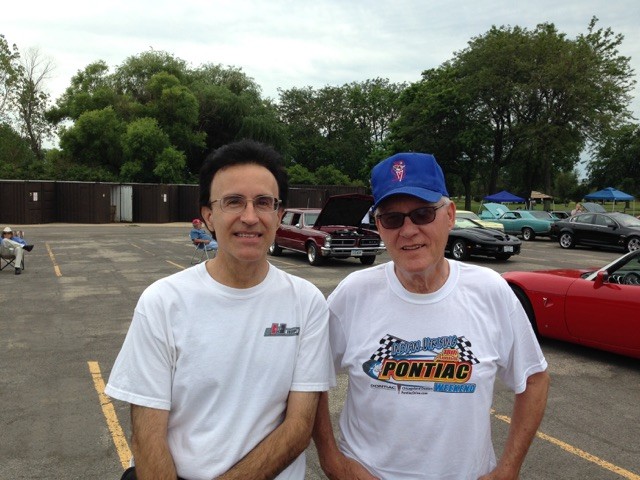 Mike Noun and Larry Delay at the Unrising.

The second group we need to thank is the Technical Advisory Team.  They help  keep us on-point with Pontiac facts and history as well as they are the go to guys when anyone has a question on the correctness of a part or restoration advice. Thank you to Dave Armstrong of PMD Restorations, Mike Noun of Muscle Car Films, Tim Dye of the POCI Museum, Larry Delay and Eric Vickers. 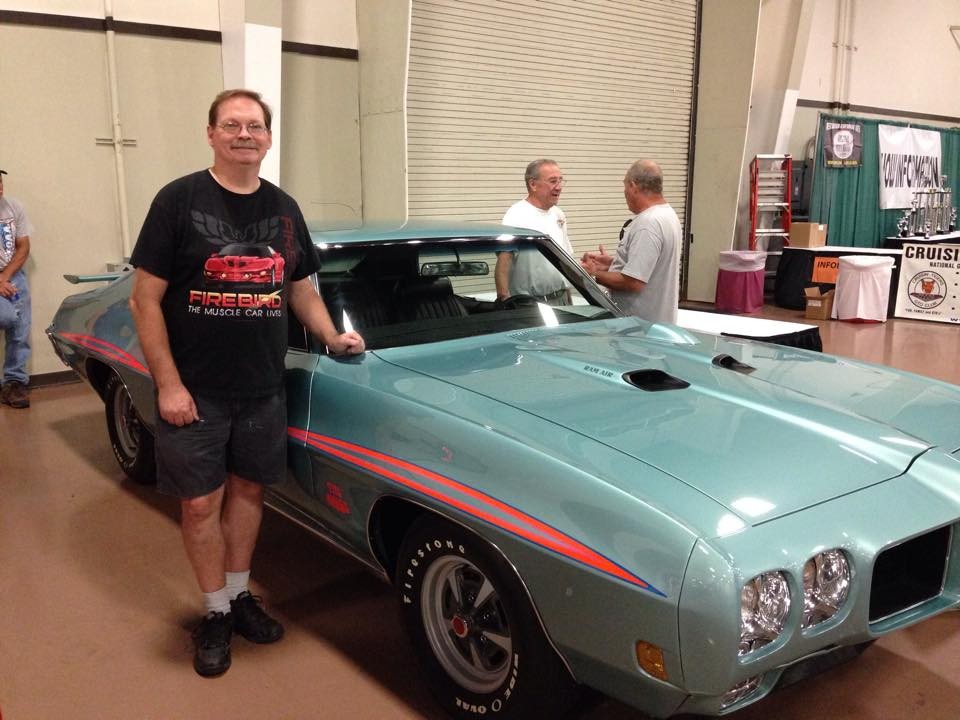 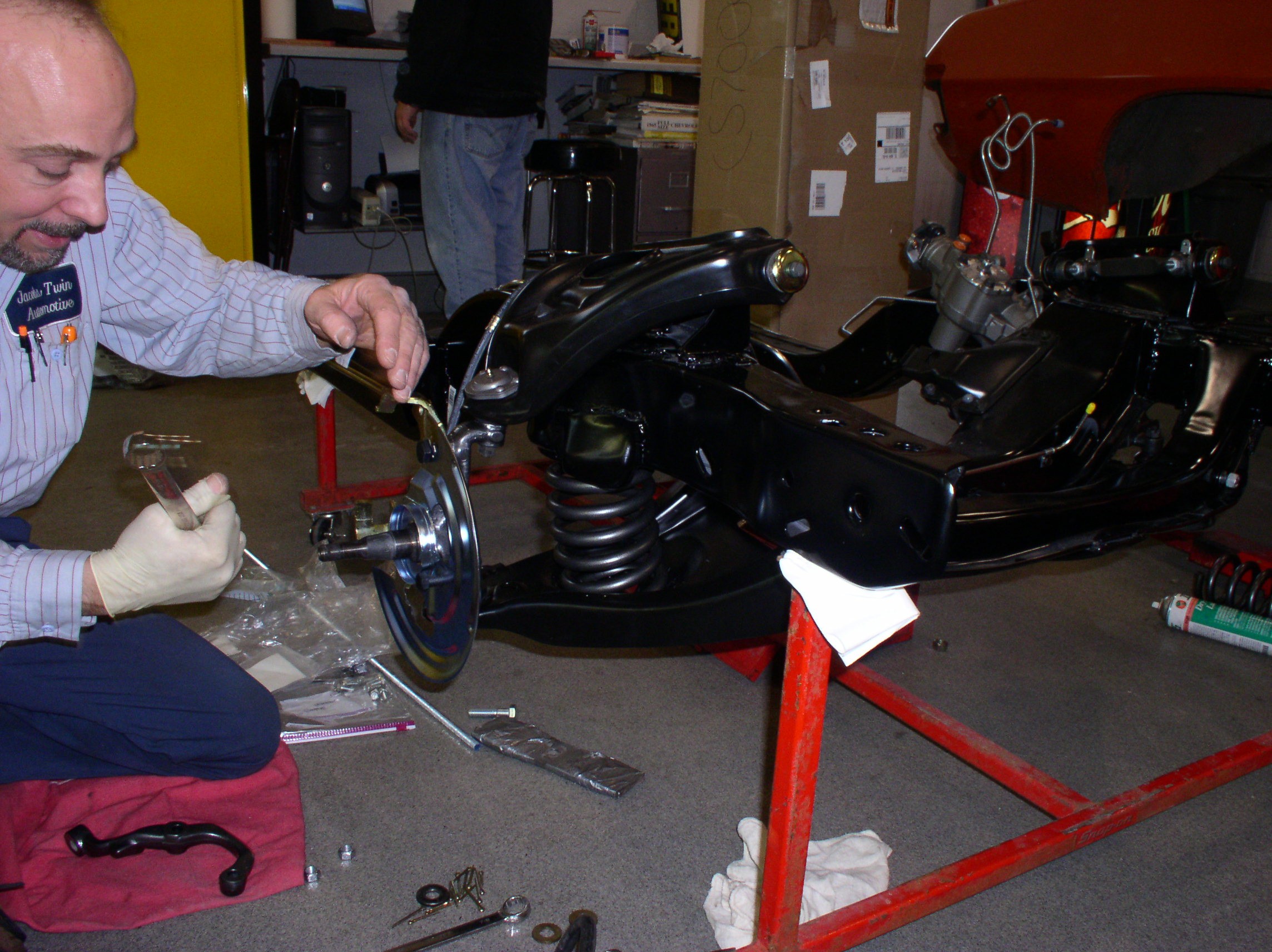 We look forward to another great year in 2018, and hope you will be able to join us at some of our events!